Primitivo
@EatPrimitivo
At this NOLA newcomer, our waitress explained that there isn’t really a theme or nationality that guides the menu Primitivo, just a philosophy. That philosophy is to use local, seasonal ingredients and prepare them in some manner that involves their gigantic open-flame hearth. Smoke is the key to nearly every dish they serve here.

Perfect for dude’s night out in NOLA.

The decor has a masculine German beer-hall vibe with gothic calligraphy typography and distressed wood defining a majority of the aesthetic. Between the huge, hearty portions and very reasonably priced cocktails, this place was made for the bachelor party “nice-meal”. While I do really like the place, I wouldn’t necessarily tell NOLA first-timers to go on their first trip — there’s plenty of other places in the city I think are more essential to go to first (see: Cochon, Commander’s Palace, Red’s Chinese, Compère Lapin, or Sylvain for example).

The first thing you’ll experience as you enter this dudely restaurant is a bold wave of wood-fire smoke as it washes over your entire body and practically smashed you in the face. A large portion of the menu involves meat, but there are actually plenty of smoke-infused vegetable and seafood-based dishes as well.

You definitely have to be a big fan of smokey food though — which I am. I appreciated the smokey-char flavor that was integrated into nearly the entire menu although it lead to an arguably less-dynamic tasting menu than places that do not rely solely on direct fire as a means of flavoring. The prices felt very reasonable and it really is a very good restaurant with plenty of great dishes, though perhaps not as thrilling as many of my favorite places around New Orleans. 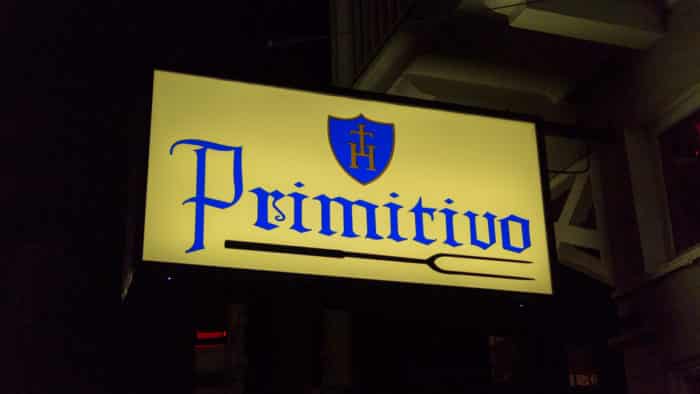 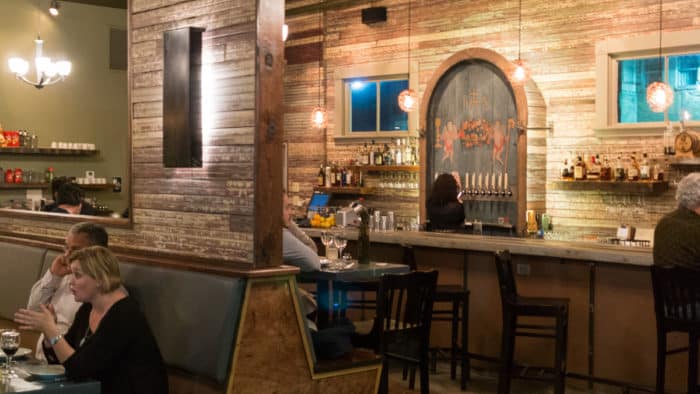 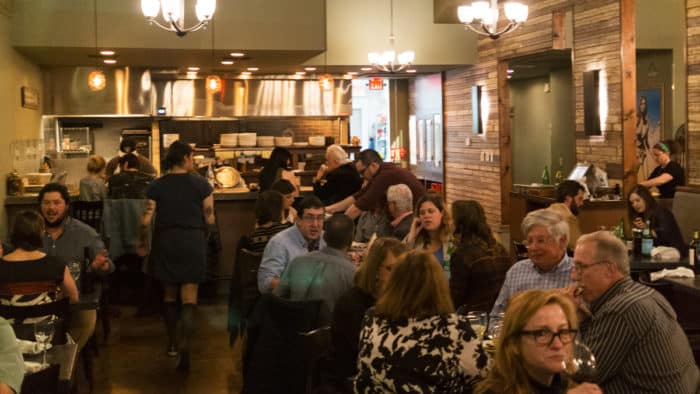 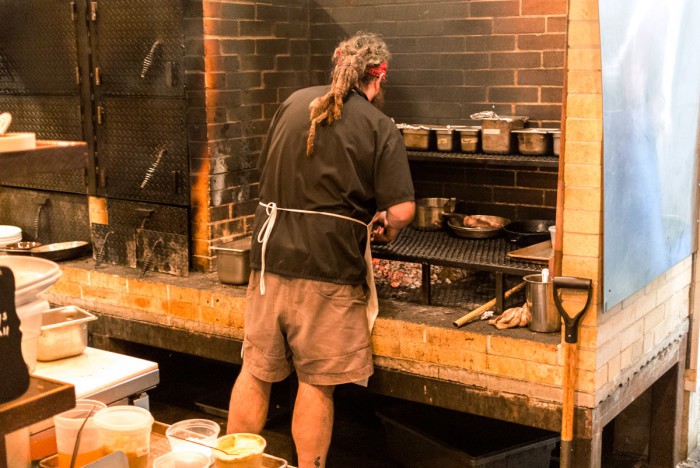 Boulevardier
On tap! Quite good the way the Campari’s bitterness balanced the whiskey’s booziness.

Lion’s Tail
This cocktail was a special for the night, so it may not always be available. It was sweet and citrusy, which really cut the whiskey’s boozy strength. I liked it, but preferred my boldly bitter Boulevardier. 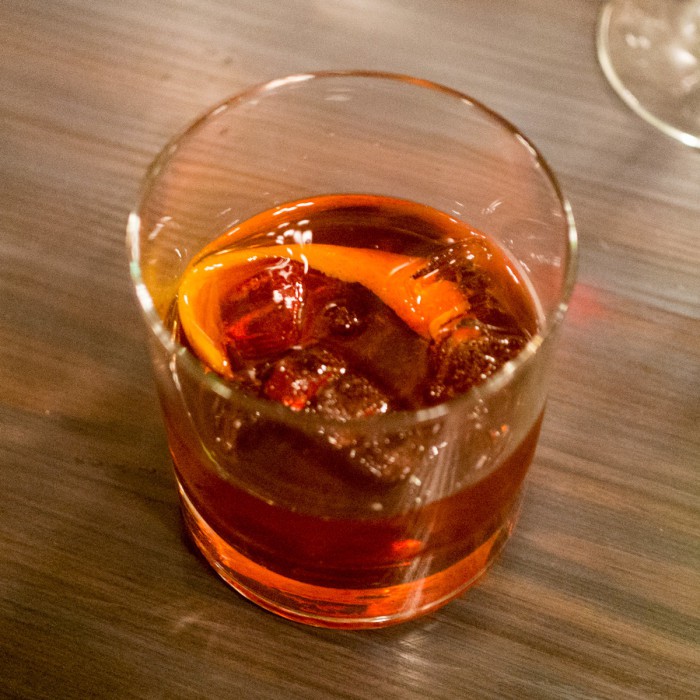 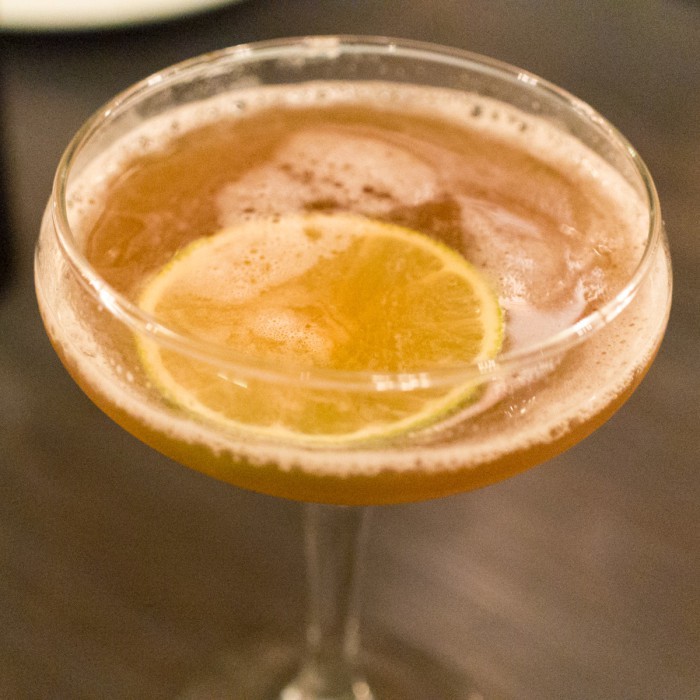 Fried Duck Wing Confit, Wing Sauce, Herbs, and Sunflower Seeds
I don’t think I’ve ever had duck treated like buffalo wings anywhere else before and I have no idea why no else is trying it. These were awesome.

Not exactly as meaty as the more standard chicken variety, but the gamier meat added a level of unique interest that I absolutely loved. The confited meat was extremely tender and the crispy, fried exterior soaked up the wonderfully tangy buffalo sauce quite well. Sunflower seeds also were a nice touch for added nuttiness.

Braised Pork Cheeks, Smoked Pork Butt, and Dumplings in Carbonara
This was the first dish both Amy and I were drawn to on the menu, but it sort of underwhelmed compared to expectations.

The hunks of pork were ridiculously tender and were by far the best part despite their fairly mild and simple flavor profile. The dumplings were kind of like a dense, oblong matzah ball which I’m not sure is a compliment. But, the part that threw me off the most was calling this dish a “Carbonara”. When you say “Carbonara” you are setting high expectations for absurd levels of creamy, cheesy richness and this dish was kind of thin, light, and brothy. Still tasty, but not exactly what we had expected.

5 Hour Smoked Beef Coulotte, Pimento Cheese Grits, Scallion Jus
Again, quite a nice portion with five or six hefty slices of beef coulotte. There was a wonderful spice-crust on the edges and an impressive juiciness throughout, and the pool of scallion jus added even more flavorful moisture to the dish.

The best part of all was the pimento cheese grits. I’ve never heard of anyone doing this anywhere else, but really — they should. They were freaking incredible.

Ember Roasted Shrimp, Boudin Rouge Dirty Rice, Catfish Aioli
See, I told you it’s not just all meat at this place. The shrimp were cooked perfectly. Snappy with nice char flavor infused deep into each curled up sea creature.

But, my favorite element was that absurdly delicious dirty rice. It had tiny, crumbly, meaty boudin sausage morsels littered throughout and a crazy smokey, funky, garlicky cream-type sauce that they called a “Catfish Aioli” — whatever that means. All I know is that it was damned delicious.

Braised Mustard Greens, Garlic, Chili Vinegar
This was a side that Amy had noticed and requested and I was really glad we got it. It ate a lot like traditional Southern collard greens, but had a ridiculously smokey flavor infused deep into the thin potlikker. There was an awesome, spicy, tang to every forkful.

Rye Whiskey Pecan Ice Cream, Caramel, Whipped Cream, Bourbon Soaked Strawberries
Taking advantage of the prime Ponchartrain strawberry season, this dessert was an absolutely awesome way to conclude the meal. Unlike many of the other strawberry desserts I’ve had in NOLA, this one didn’t soak the berries in an aggressively sweet, sugary liquid, which truly allowed the fresh fruit to shine. The whiskey-infused ice cream was great as was the fresh whipped cream. But my favorite element by far was that insanely delicious sticky, sweet caramel drizzle. It really tied the whole thing together. 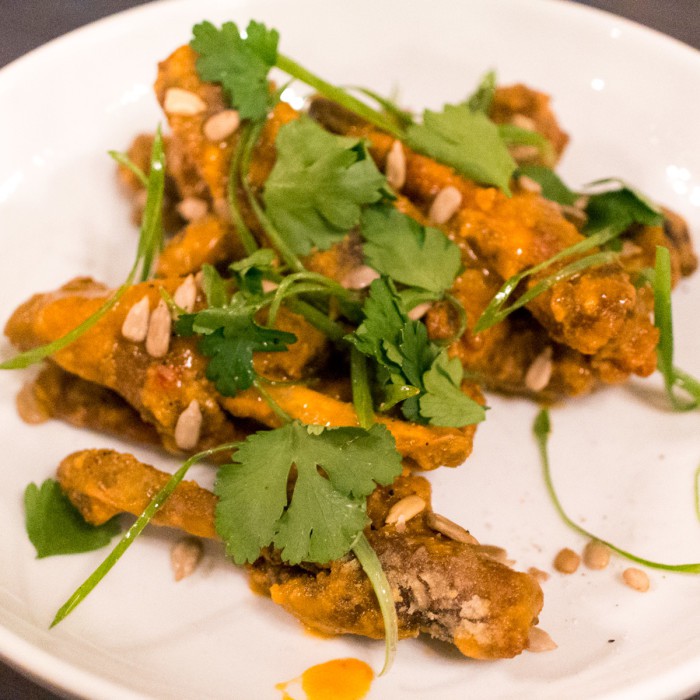 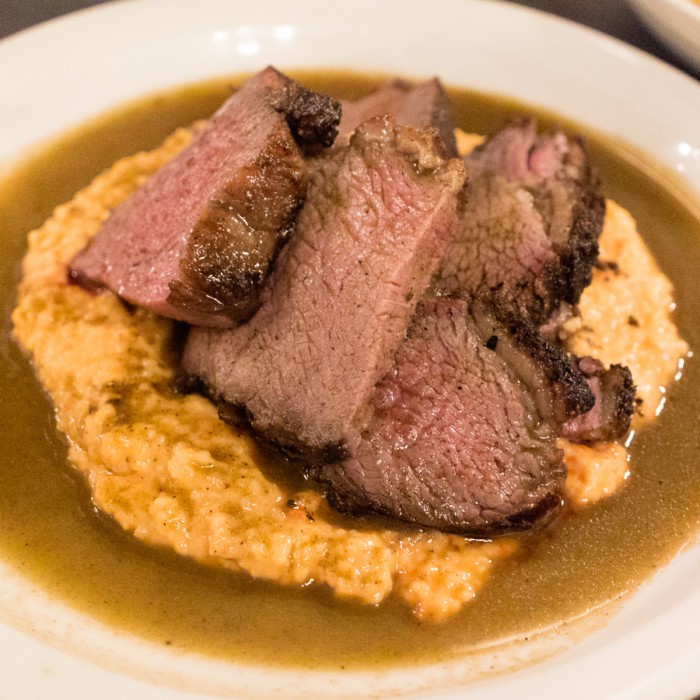 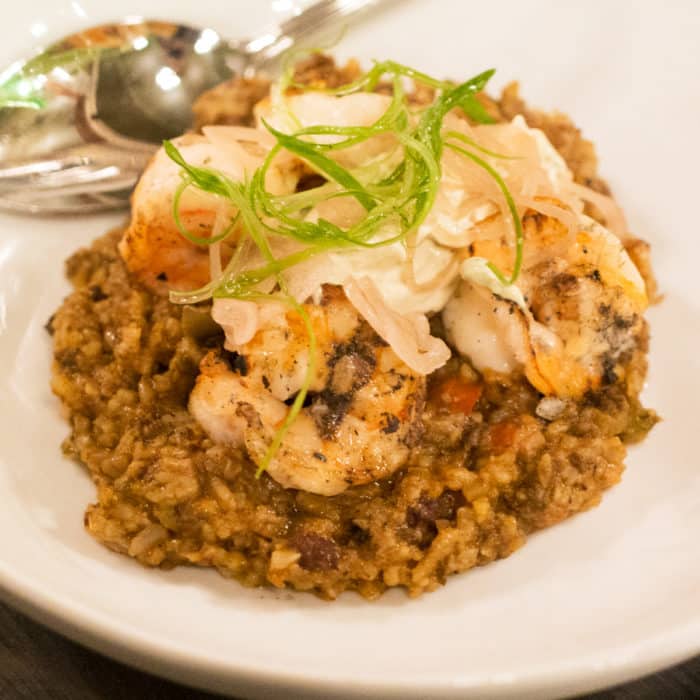 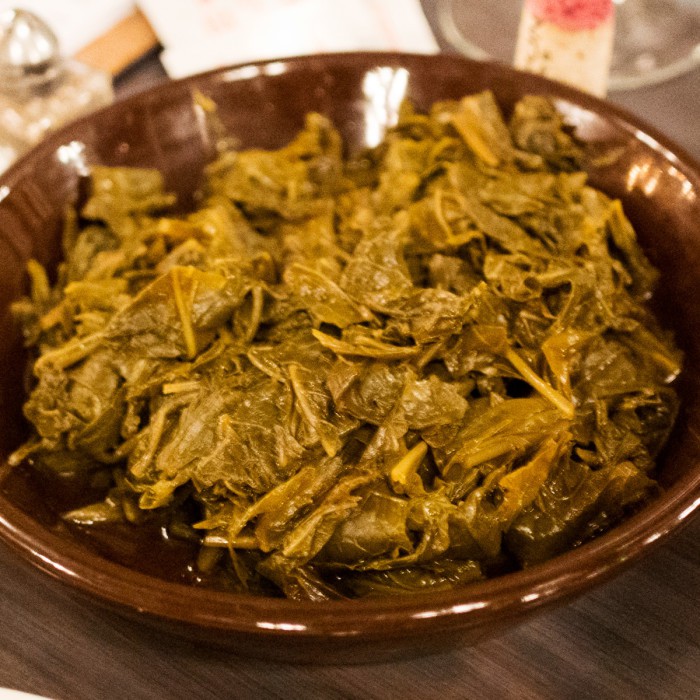 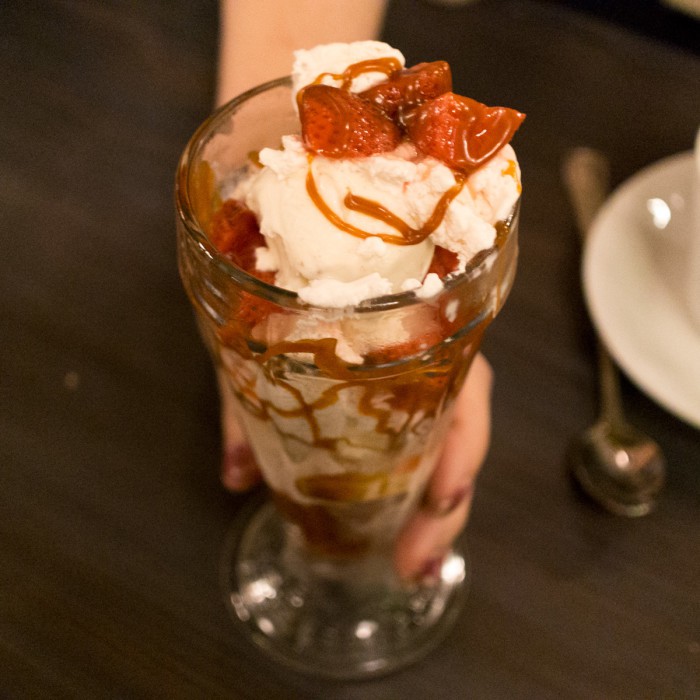