Parkway Bakery and Tavern
@ParkwayPoorboys
This bar and restaurant is quite old, very famous, and generally regarded as the ultimate place to go for the very best poboys in NOLA.

This is the kind of place that’s perfect for any time you need a big, cheap, hearty sandwich full of greasy meat and deep-fried seafood to crush an epic Bourbon Street hangover.

It’s a bit out of the way, so you’ll probably need a car to get all the way out there unless you want to splurge on a long cab ride. This place is known to generate long lines, though we were fortunately able to get food in hand in just about 15 minutes after our arrival. So, come only when you’ve got a bit of patience in case you encounter a longer line.

It totally lives up to its extremely highly-regarded reputation. The prices are stupid-cheap and there’s such a sense of old-school authenticity to it. Portions are monstrous and everything is extremely over-the-top, decadent, and delicious. Calorie-conscious eaters will probably have a heart-attack just thinking about consuming this menu’s offerings. 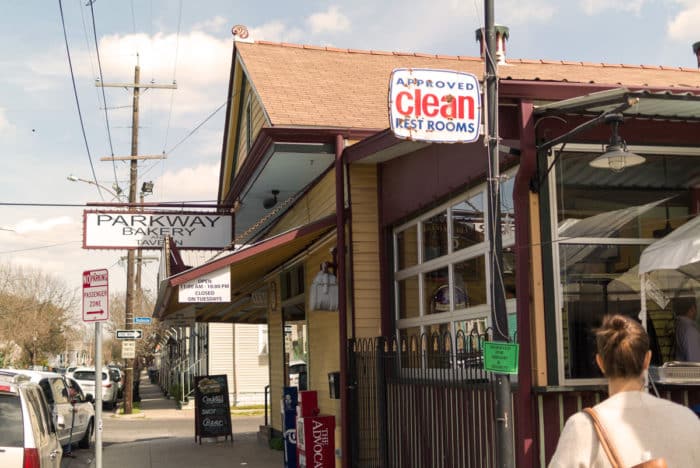 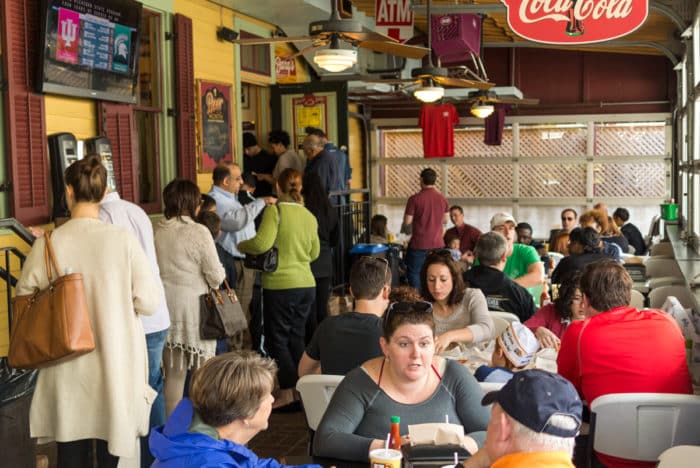 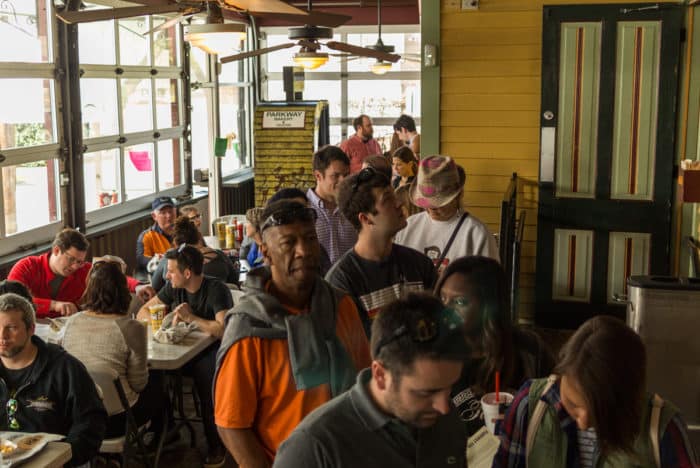 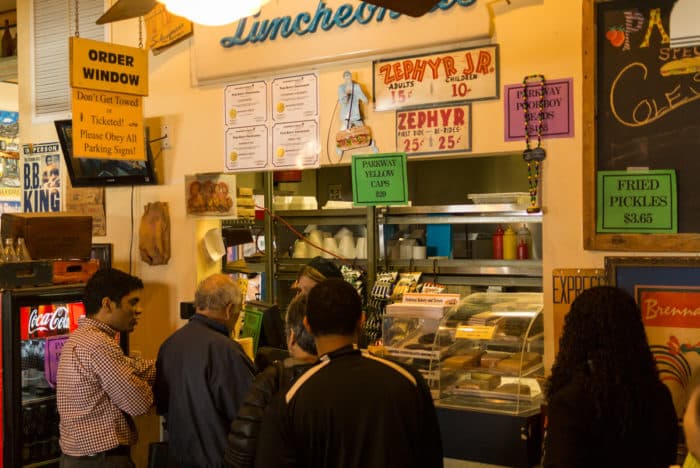 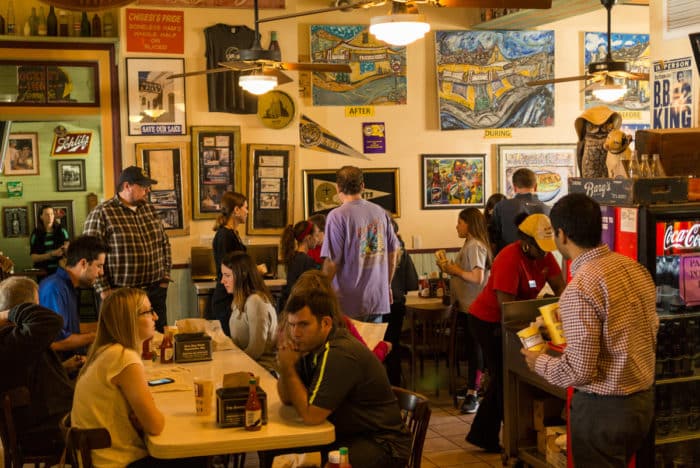 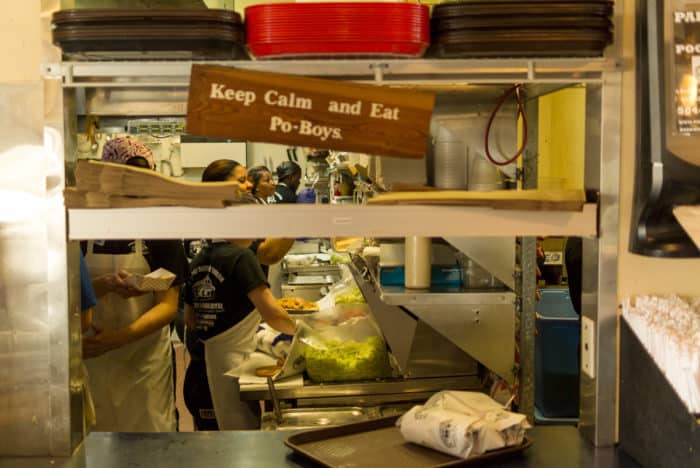 Real Barqs Root Beer
I’m sure you think you had Barqs (“Barqs got bite”), but these glass long-necks are in a league of their own. Made with real cane sugar, the sweetness balances the bite and pairs really well with the hearty, hefty sandwiches you’ll inevitably order with it. 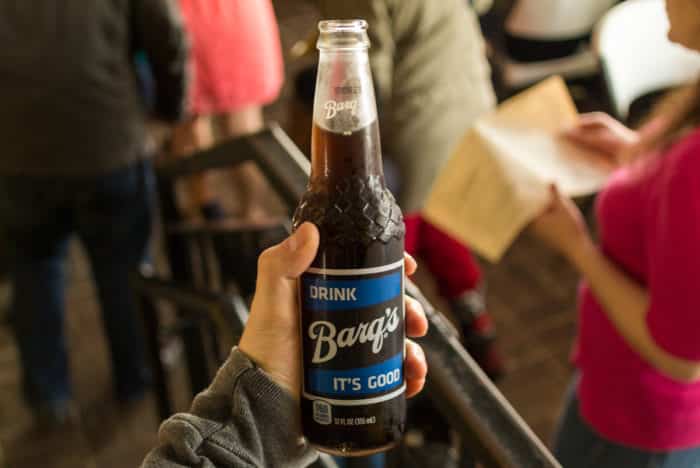 Fried Pickles
I spotted this dish scrawled in marker on a dry-erase board near the register, but it’s not to be missed if it’s available. They are probably the finest frickle specimen I’ve ever had the pleasure of consuming.

The thin pickle slices were battered in a thick cornmeal crust that allowed them to crunch like a potato chip. To pair, there were about eight different sauces to choose from, though I was partial to the creamy ranch and Cajun aioli options.

Parkway Surf and Turf Poor Boy
This is the one their most well-known for, so I had to give it a go. The full-size one only costs $12.95 and is nearly a foot long with an overwhelming heft and girth to boot. (A “regular” aka half is still only $8.95.)

On a high-quality traditional sliced baguette, they layer jus-soaked shredded roast beef across the entire bottom surface before applying an equally as absurd portion of cornmeal-crusted shrimp. I opted for it “dressed”, which translate to a topping of lettuce, tomato, pickles, and mayo — you should too.

The thing is an utter mess to eat, there’s no way around that. The shellfish was so fresh and oceany-tasting without even a touch of unpleasant fishiness. The frying style was dry and crisp, as least until before the beef jus came into contact with them.

And yeah, that roast beef wipes the floor with the wet slop that people loose their minds about at Mother’s Restaurant and paired extremely well with the shrimp which were fried more perfectly than I’ve ever experienced them anywhere else. Also, I enjoyed adding a few shakes of traditional Louisiana Crystal’s hot sauce to the thing. Killer, to say the least.

Home-Cooked Hot Roast Beef with Gravy Poor Boy
If you want only the roast beef half of the surf and turf, this sandwich is the way to go, though I think the shrimp was the better of the two fillings. At $7.95 for a “regular” aka half-sandwich it’s still a great deal and will serve you quite well.

Golden Fried Shrimp Poor Boy
But, as much as I enjoyed the roast beef, gravy, and surf and turf combo poor boys, this shrimp-only version was actually my favorite of the bunch. Without the moist meat in the mix, the golden fried shrimp remained amazingly crispy and dry-fried crunchy. The amount of shrimp filling was downright impressive. You can totally open it up and eat some of the fried shrimp pieces with a fork and still have a fully stuffed-to-the-gills sandwich. This too, I would recommend dressed with a couple good shakes of Crystals hot sauce. 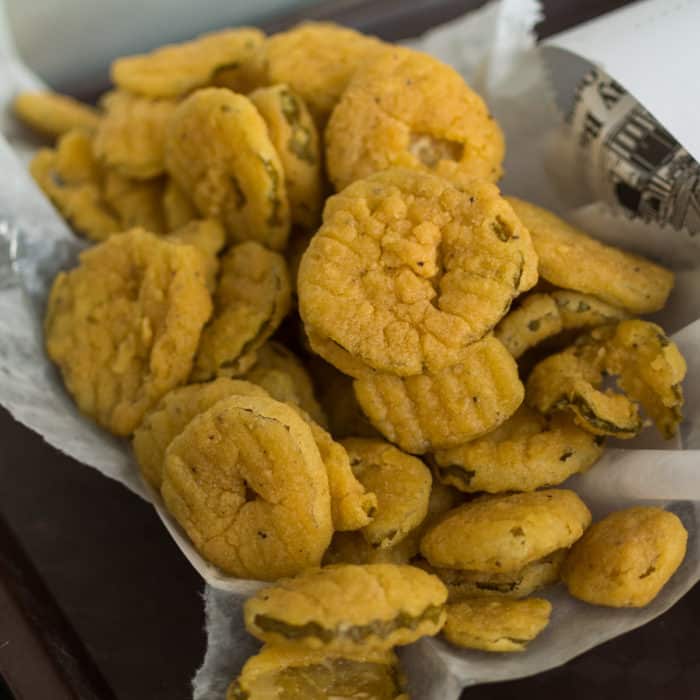 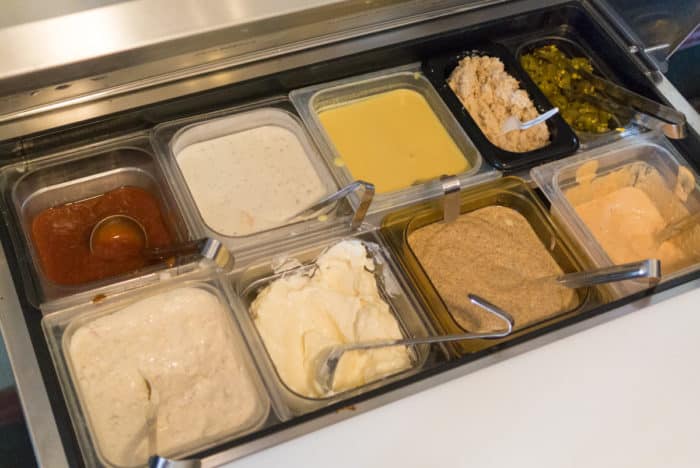 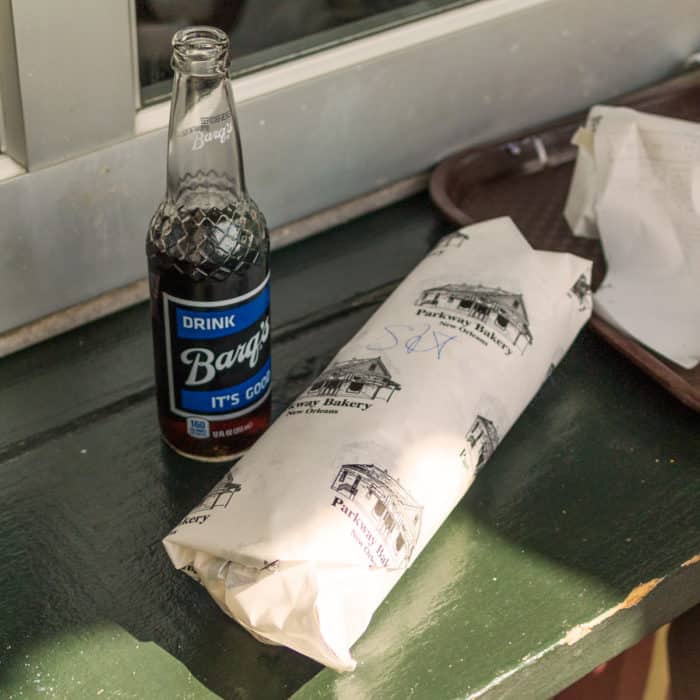 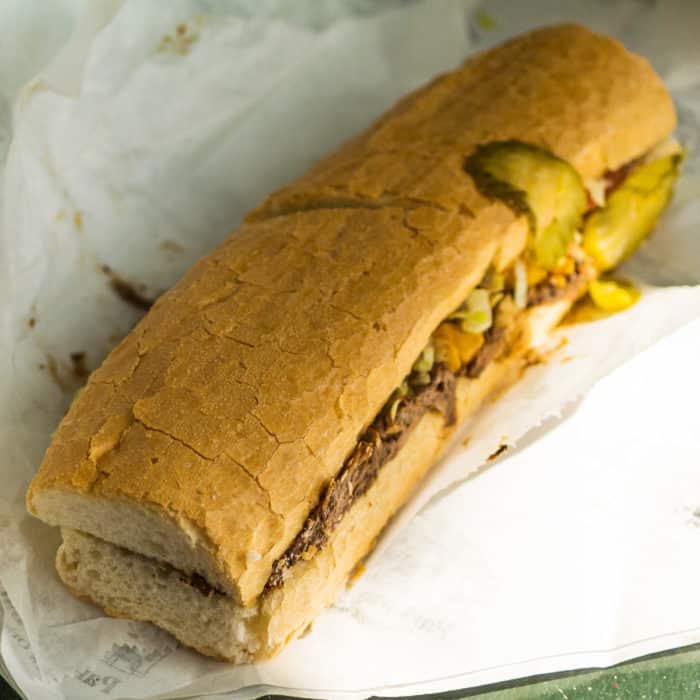 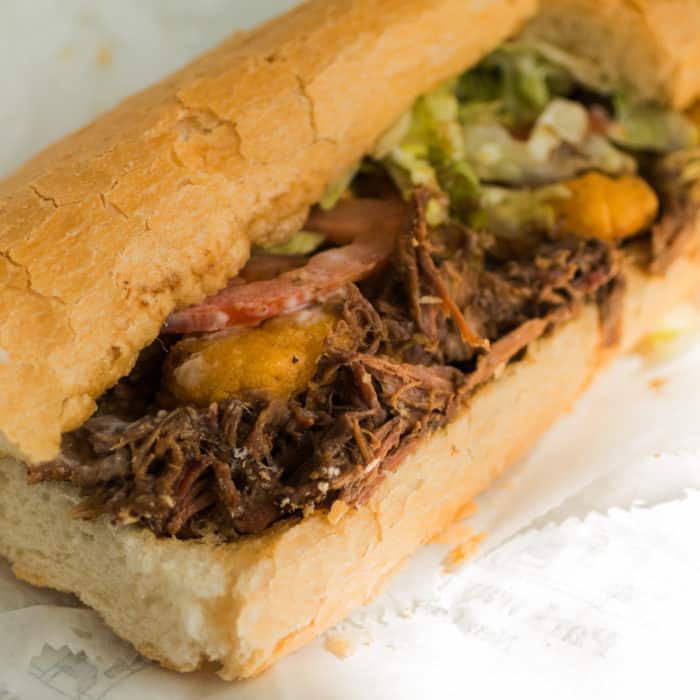 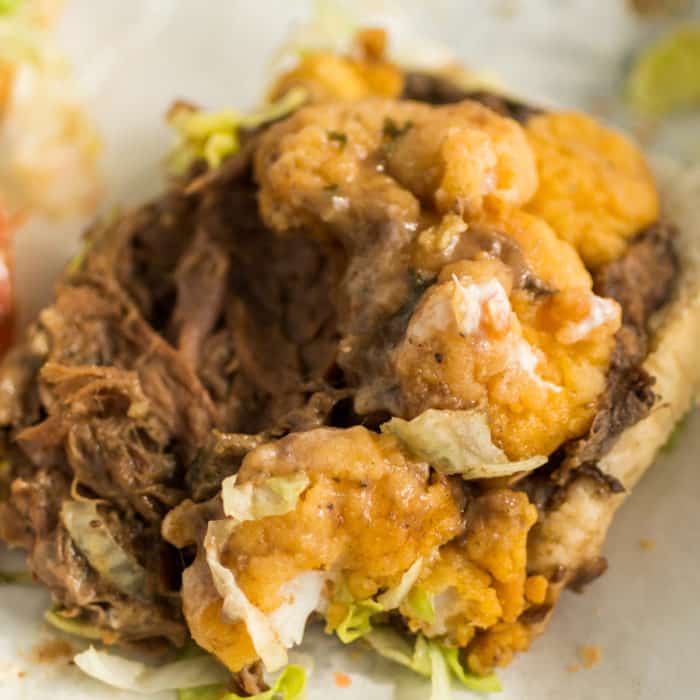 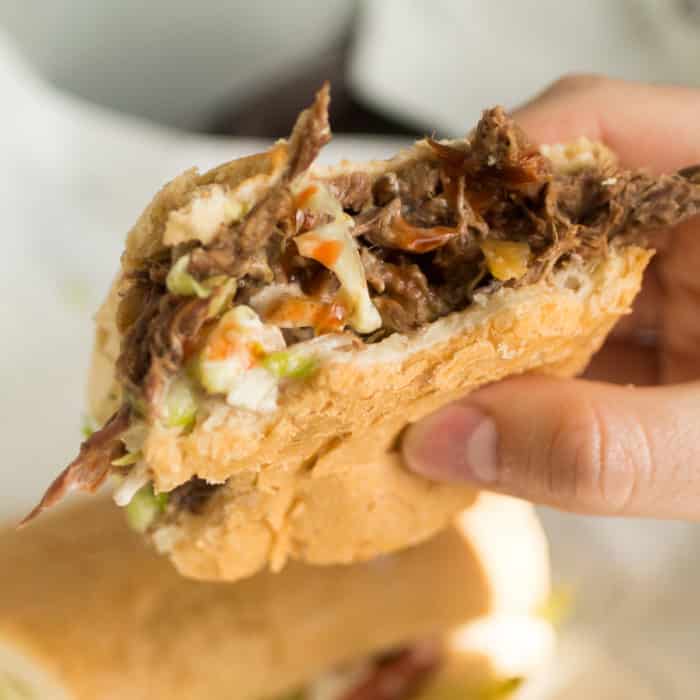 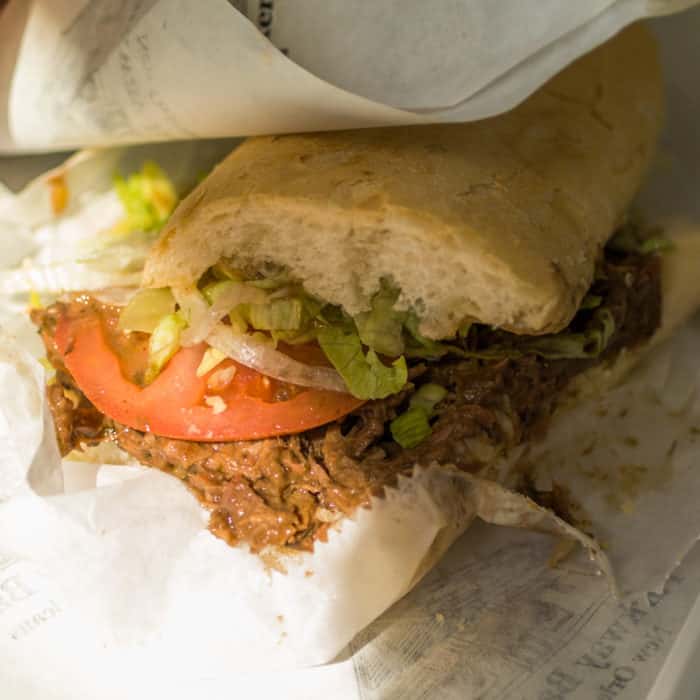 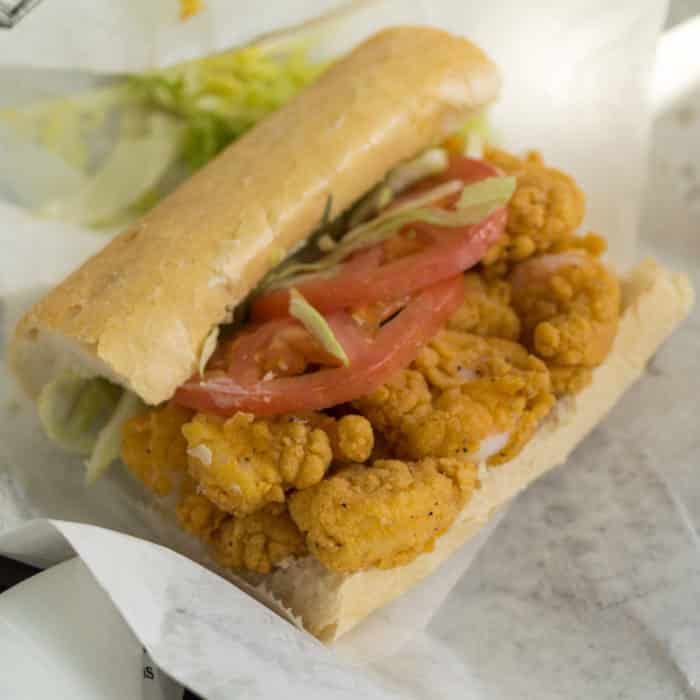 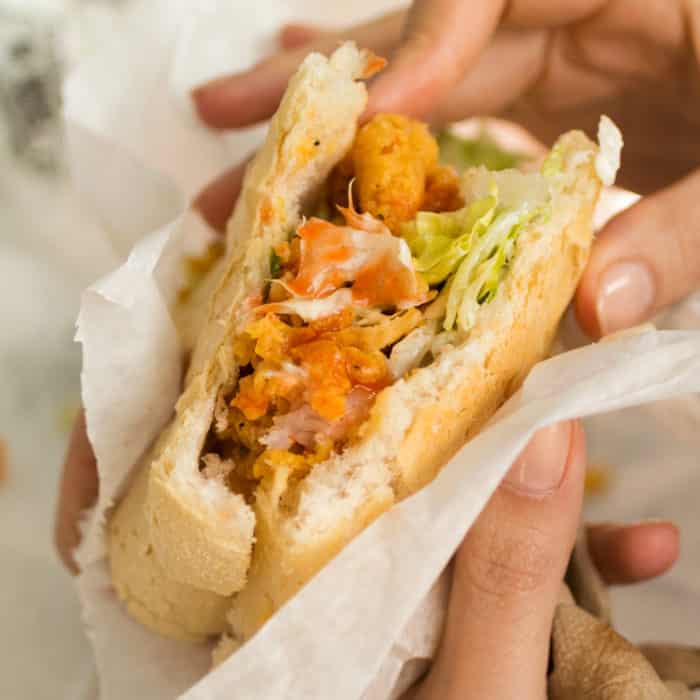