State Bird Provisions
@StateBirdSF
This restaurant hardly needs an introduction. One of SF’s hardest tables to land. Theyare famed for the way they embrace the dim sum system to serve creative New-Californian cuisine.

The married chef-oweners, Nicole Krasinski and Stuart Brioza, have both earned themselves a James Beard award as Best Chefs: West in 2015 for the restaurant among many other accolades.

This James Beard awarded restaurant (Best New Restaurant 2013) is one of San Francisco’s most difficult to land tables — you’ll either need to get lucky enough to snag a reservation a couple of months in advance or be willing to show up at 4:30 pm day-of for a dinner seating a few hours later. Fortunately for us, we were invited to an eight-person dinner party, so snagging the res was out of my hands.

The place exemplifies new-Californian cuisine with the unique vantage of serving it through a modernized dim sum style lens. Yes, they utilize a version of the walk-around dim sum cart system, but what you’ll find here is no ordinary dim sum fare. Instead, you’ll find inventive dishes utilizing decadent, foreign, and extravagant ingredients such as kinako, kohlrabi, and albacore floss in bold and innovative ways.

Though it is ultimately quite expensive to dine at this perpetually popular and difficult-to-get-into restaurant, and I do wish the had an innovative cocktail program to pair, the dishes were for the most part very much worthy of the extremely high praise they frequently receive.

Since we were dining as part of an eight-person birthday dinner reservation, we had a preset (15-course!) menu and didn’t participate in the dim sum cart setup. It was probably for the best with a party of this size to avoid the constant debate of take or pass. The menu changes often, but check out all of the dishes we had on our visit below. 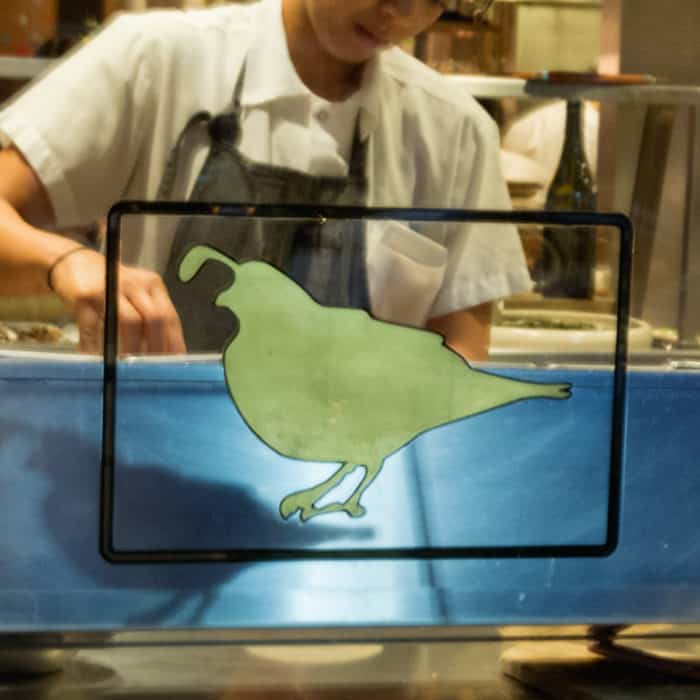 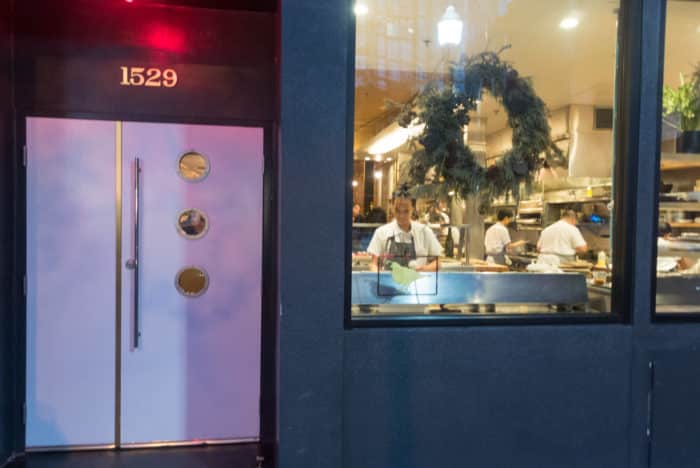 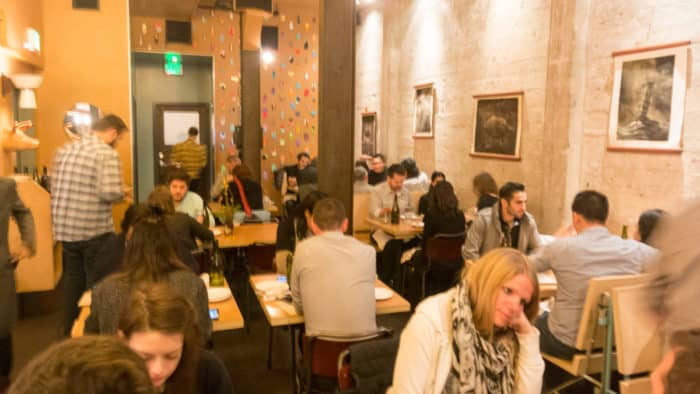 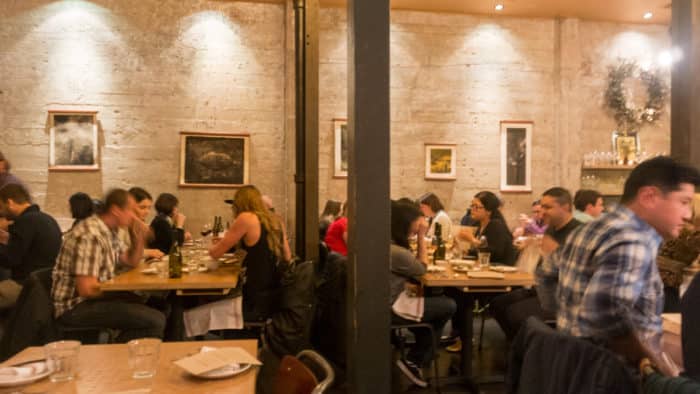 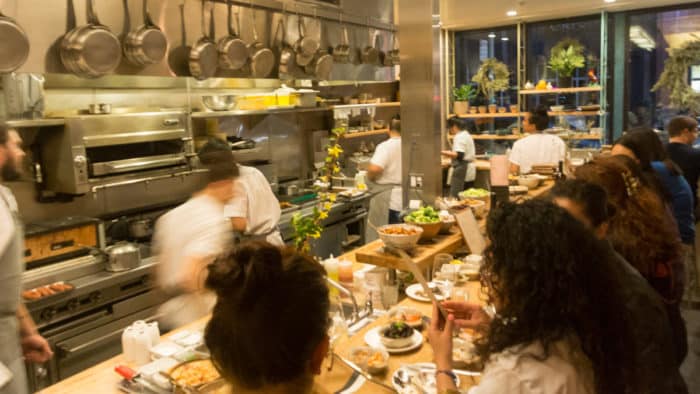 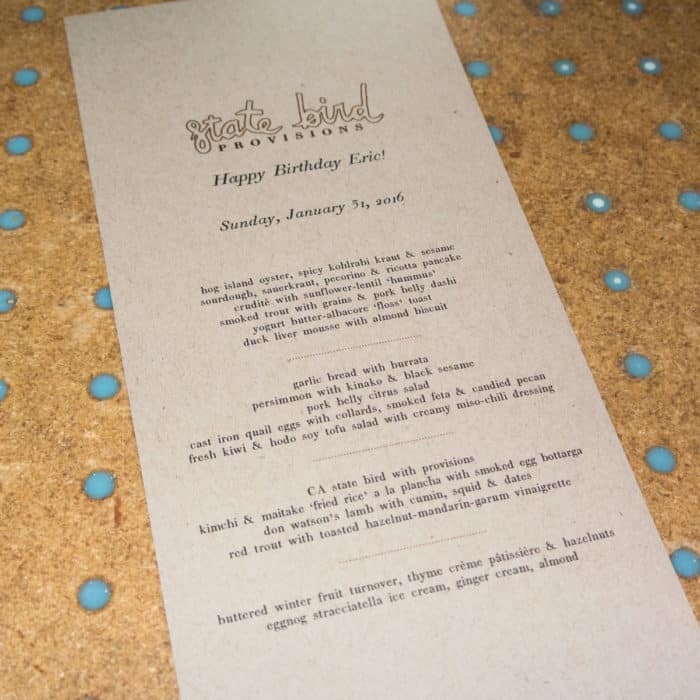 Duck Liver Mousse with Almond Biscuit
At first, I thought this was cornbread, but it was actually almond-flavored. The mousse was silky smooth and absolutely luscious. The two paired together really well.

Crudité with Sunflower-Lentil ‘Hummus’
Light, fresh, pretty nice but by no means a show-stopper.

Persimmon with Kinako and Black Sesame
Man, persimmons are everywhere these days! Well, if I had to have one preparation, this is the one I’d pick. The fruit was firm and crisp and came served in an amazingly thick, nutty sauce. There was a strong, salty umami punch from what I assumed was miso or seaweed, but was actually a roasted soybean flour called kinako. Sooooo good.

Hog Island Oysters with Spicy Kohlrabi Kraut and Sesame
These oysters were local, from Hog Island, so they were super-fresh. The topping was bold, spicy and tasted strongly of sesame. It made for a really hearty, complex bite. Loved it.

Yogurt Butter-Albacore ‘Floss’ Toast
Fancy toast is so on-trend for San Francisco. And these were damn good. They used very high-quality bread that had a nice chew and came fully loaded with garlic butter. On top, there was an unusual substance they called albacore floss. It had an unusual texture — a little chewy, but ultimately quite nice. There were watermelon radish slices on there too, but I think that was mostly for aesthetics. A+ fancy toast.

Smoked Trout with Grains and Pork Belly Dashi
This was intensely porky! It was sort of like a cross between soup and tea. In fact, they poured the porky, dashi broth from a teapot into the old-school Chinese black tea cups at service. There was an umami punch from the pork belly, earthy mushrooms, and smoked fish that was nicely balanced by a strong lemon flavor. Quite unusual, but I was into it.

Sourdough, Sauerkraut, Pecorino, and Ricotta Pancake
This dish was all about texture. The pancake was fluffy, hot, and crispy with an impressive creaminess from the ricotta. There was a noticeable, but mellow sourness from the sauerkraut too. Not necessarily one of my favorites from the night, but still very interesting.

Cast Iron Quail Eggs with Collards, Smoked Feta, and Candied Pecan
This thing came served as a crazy-looking shared skillet. The quail egg yolks were definitely the star of the show. There were some strong sweet elements, nuttiness, and intensely salty kicks from the collards. If you’re a fan dishes highlighting eggs, go for it.

Pork Belly Citrus Salad
Technically a salad, but this thing was meaty as hell. The greens were mostly herbs designed to accompany the gigantic hunks of crispy, meaty, fatty pork belly. The meat was killer.

Fresh Kiwi and Hodo Soy Tofu Salad with Creamy Miso-Chili Dressing
This was totally bizarre, but it actually worked. The tofu felt like feta cheese. This dish ate sort of like a cold pasta salad. It was pleasant, but not a must-have.

Garlic Bread with Burrata
There was a mountain of milky burrata cheese over a thick, garlicky, black pepper-dusted bread. What’s not to love? It actually wasn’t that garlicky tasting, not that I’m complaining about this decadent deliciousness.

CA State Bird with Provisions
If you’re gonna make it your namesake, it better be kick-ass. Fortunately for them, it is. The quail was so crispy and wonderfully juicy. And it came served atop a mound of marinated sour onions that were treated almost like sauerkraut. This was definitely one of the best quail dishes I’ve ever had. The other exemplary one that comes to mind is the praline-lacquered whole bird at Commander’s Palace. But, this one was fried.

Red Trout with Toasted Hazelnut-Mandarin-Garum Viniagrette
This fish dish was really nice. It was cooked perfectly, especially the extremely crispy skin. But, it was a relatively straightforward course compared to some of the other offerings.

Don Watson’s Lamb with Cumin, Squid, and Dates
This was the only dish that truly didn’t work for me. It had thin-sliced lamb, like how you normally see it prepared in Mongolian Lamb takeout, served alongside grilled squid pieces. I though it ate a little slimey, so I didn’t love this one. But, others at my table seemed really into it.

Kimchi and Maitake ‘Fried Rice’ a la Plancha with Smoked Egg Bottarga
This was the stand-out entree for me. I think this rendition could stand toe-to-toe with any version from top, authentic Korean joints. The portion was massive and the flavors were so complex, funky, flavorful, and sour. So very sour. I just couldn’t get enough of it.

Eggnog Stracciatella Ice Cream, Ginger Cream, Almond
This cold, ice cream-based dessert tasted like Christmas. It had a nice gingery bite too, but I thought the best part was the super-crispy nut crumble at the bottom.

Buttered Winter Fruit Turnover, Thyme Creme Patisserie, and Hazelnuts
This thing was sort of like a dessert empanada. It had a flaky, crispy exterior and came topped with fresh whipped cream. There were whole hazelnuts scattered around the plate and really pleasant, herbal thyme notes throughout. Inside, there was a hot, thick apple-like filling. Pretty darn delicious if you ask me. 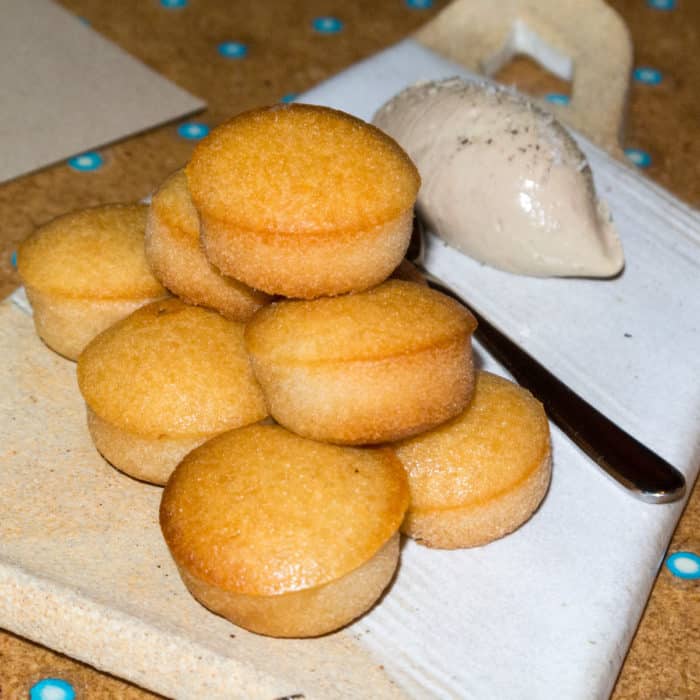 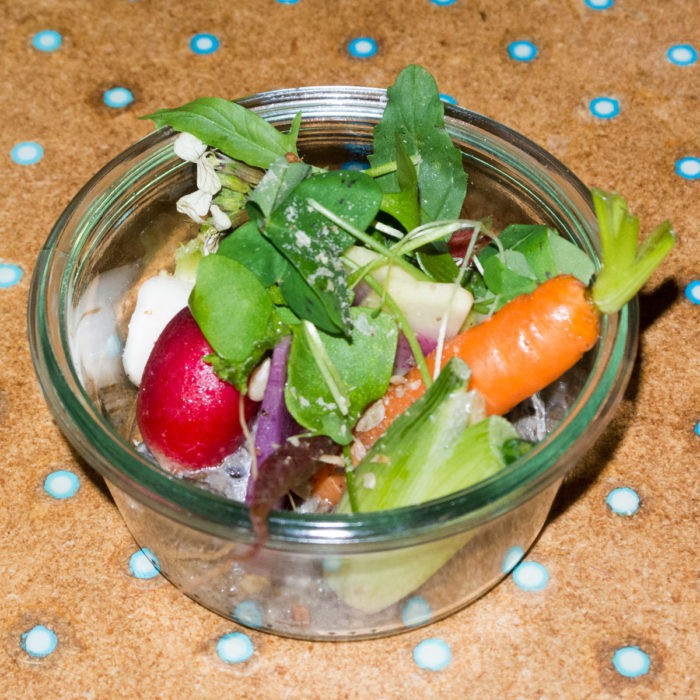 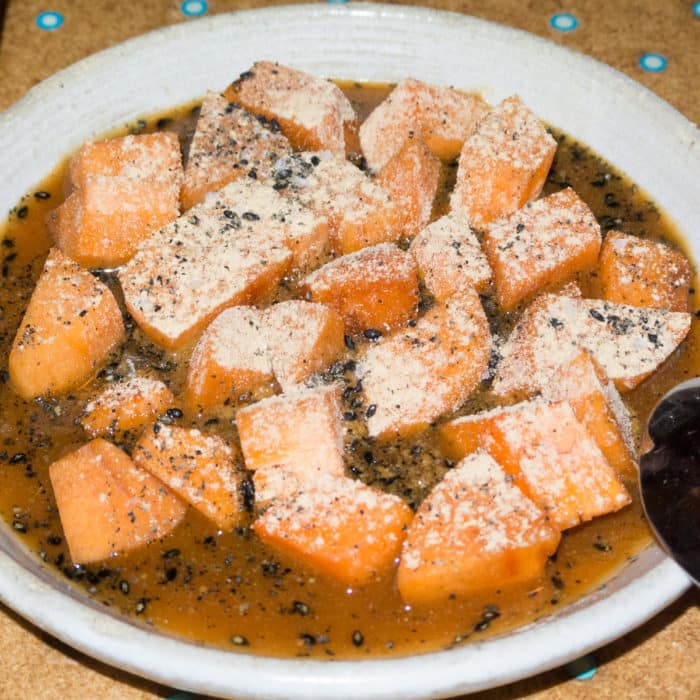 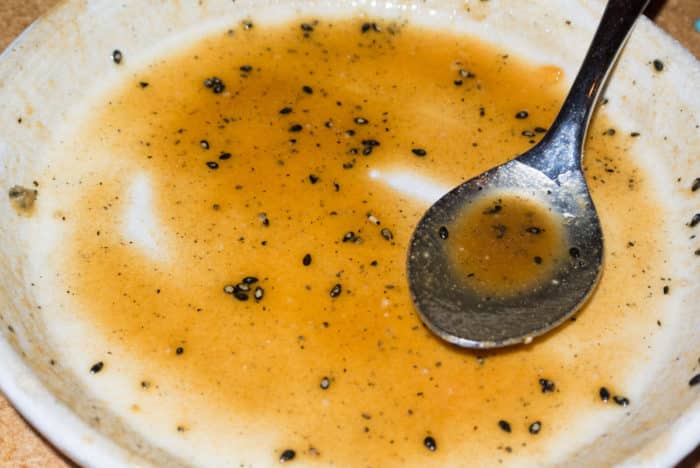 Persimmon with Kinako and Black Sesame 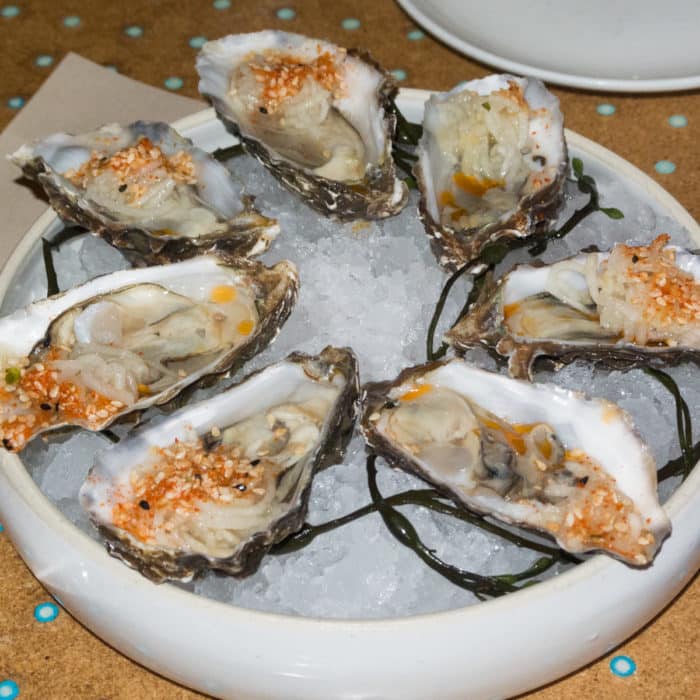 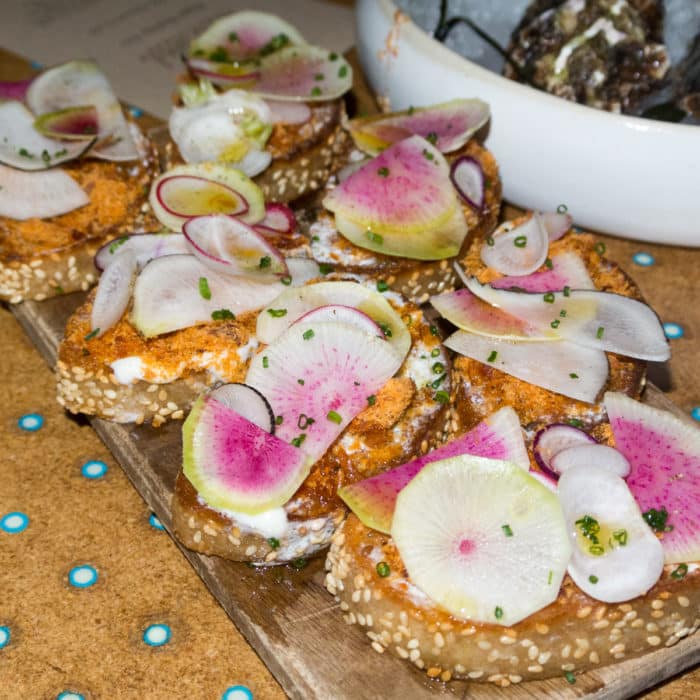 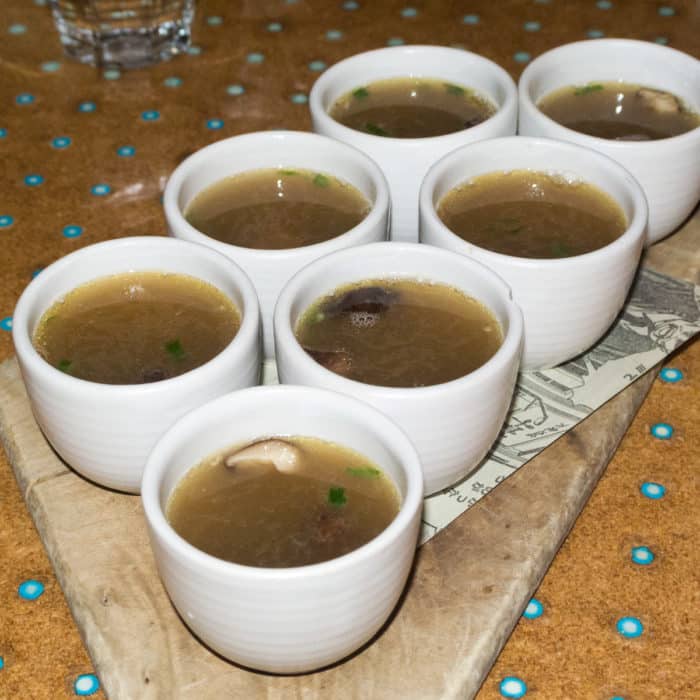 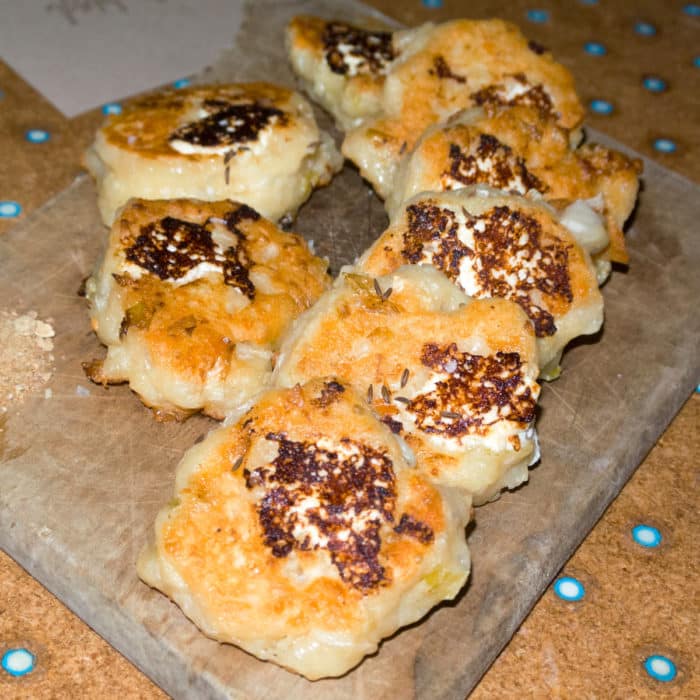 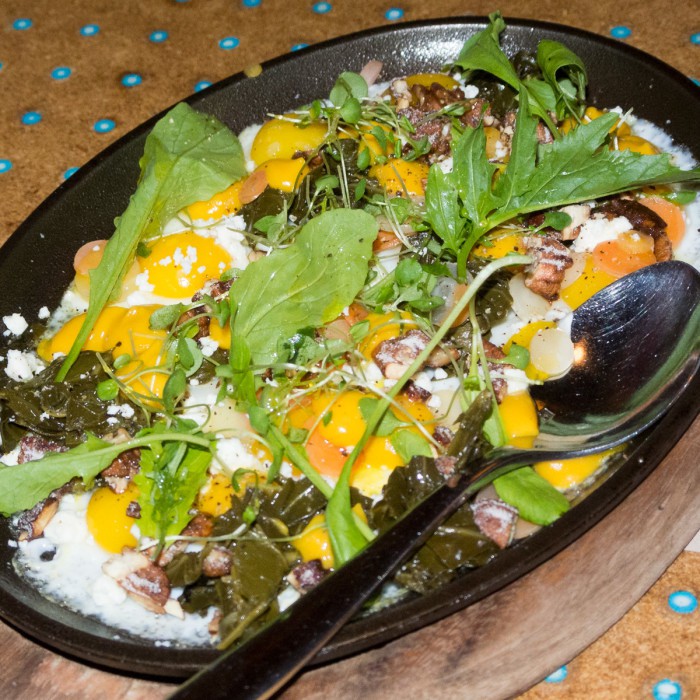 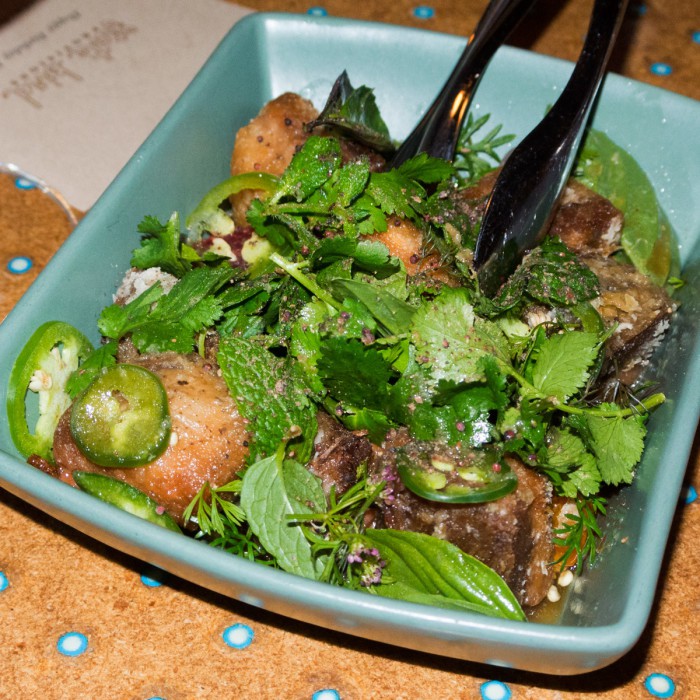 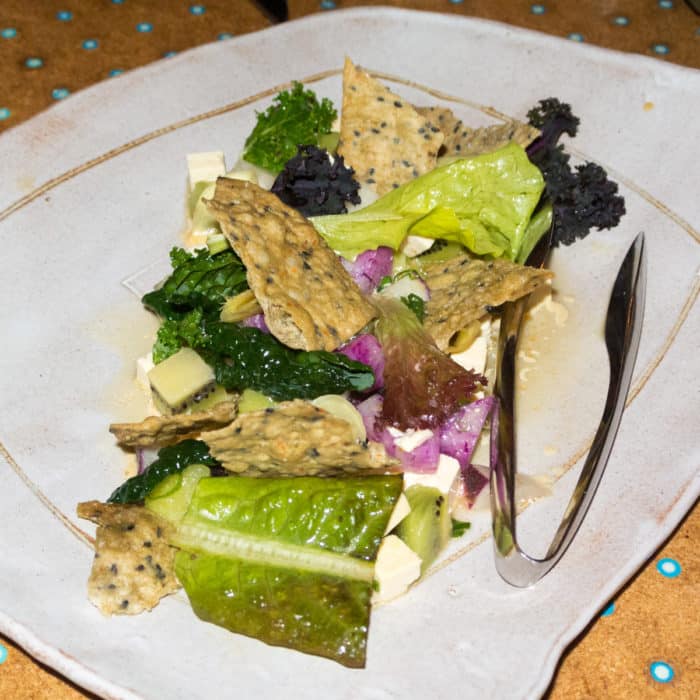 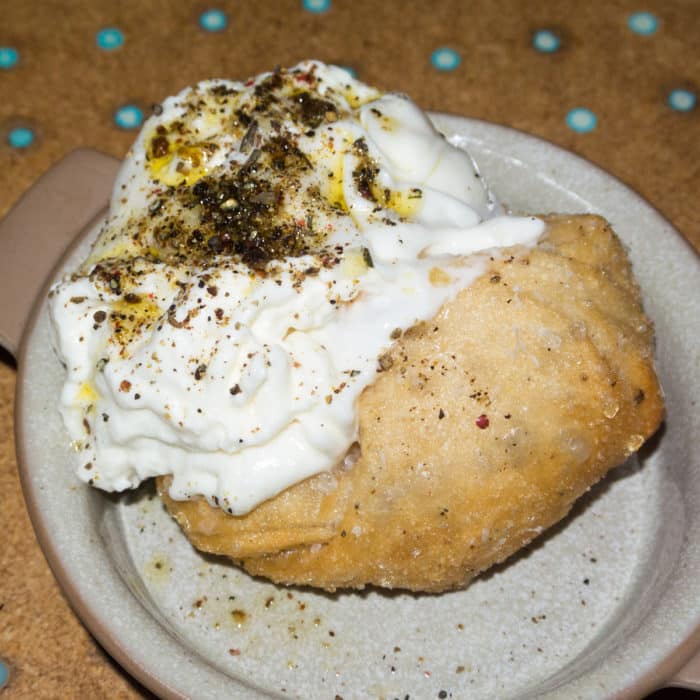 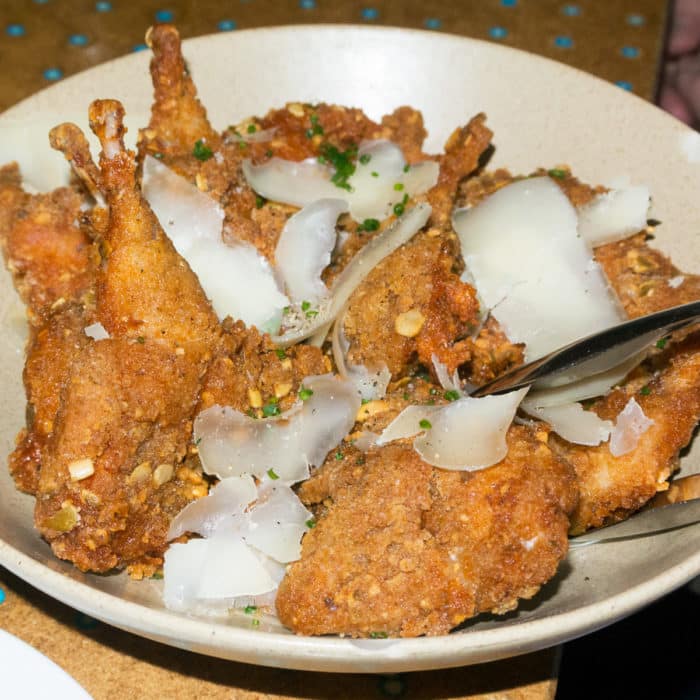 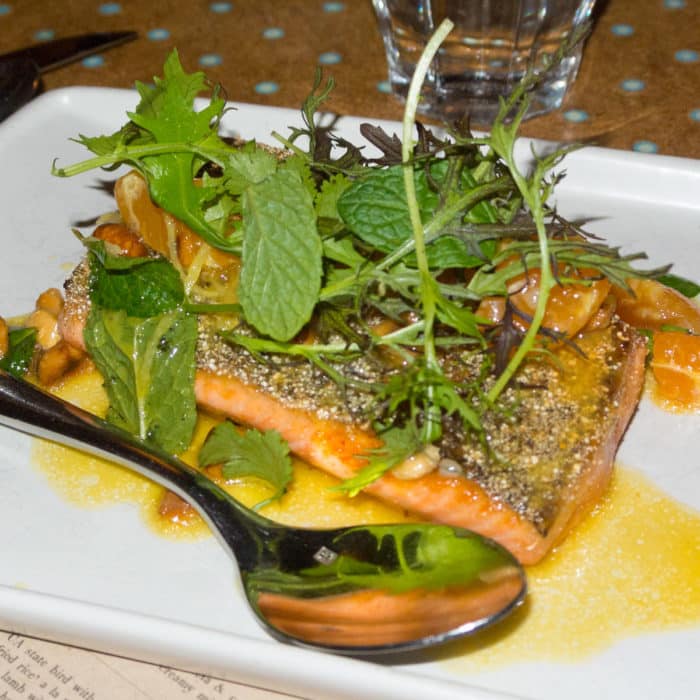 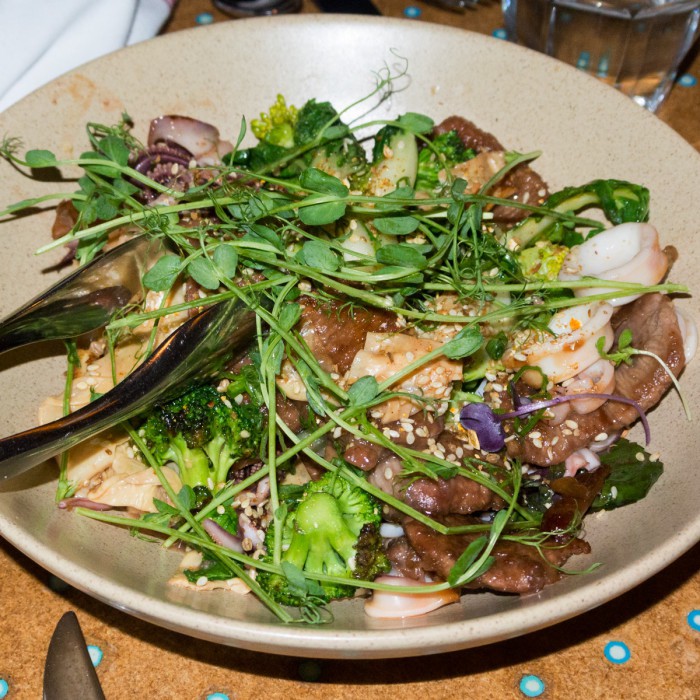 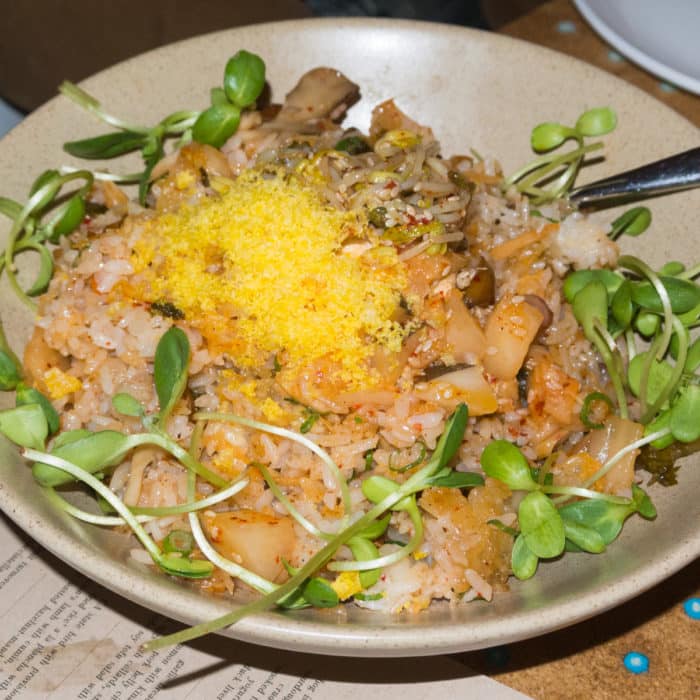 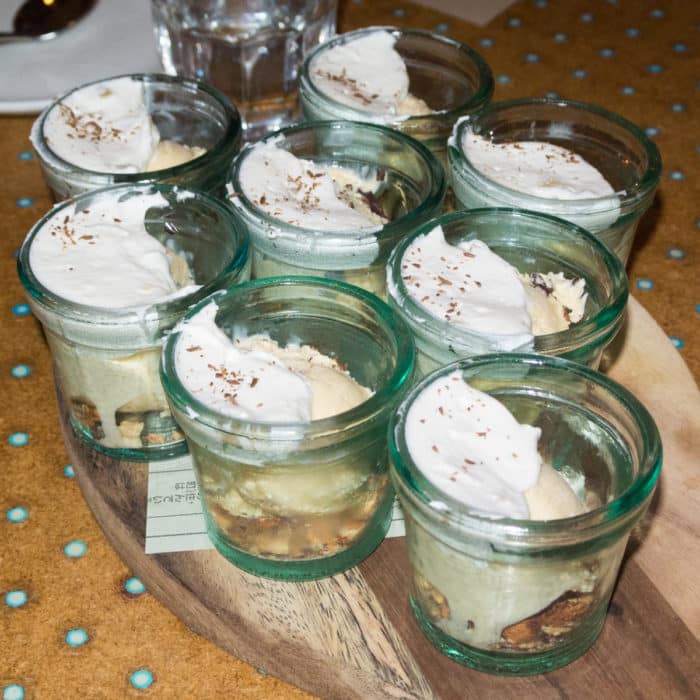 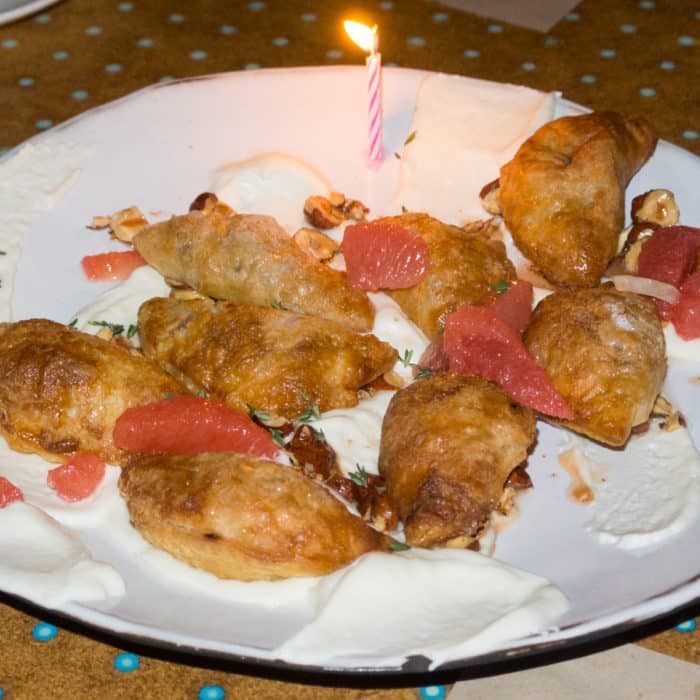 Vegan Sushi: How Good Could It Possibly Be?