There was still a full coat of morning dew on every windshield I walked by. The sun had barely risen, but I was already awake, out of bed, and standing in an outdoor line in the cold. As a general rule, I’m never willing or excited to wait in line for really anything, especially in the cold, so what on earth could have possibly compelled me to put in this sort of extreme effort?

Well, it was Amy’s birthday and I was determined to make this particular morning extra special by surprising her with a box of San Francisco’s most Instagramable pastries including the famed and elusive Cruffin — aka the new Cronut.

I arrived at Mr. Holmes Bakehouse at 7:05 AM, only minutes after their doors first opened at 7 AM sharp. And sure enough there was already a substantial line part-way down the borderline-sketchy Tendernob block, though curiously not nearly as bad as I had expected. This line paled in comparison to the much, much lengthier and more torturous queue perpetually builds on a daily basis in SoHo for Dominique Ansel’s famed Cronuts. 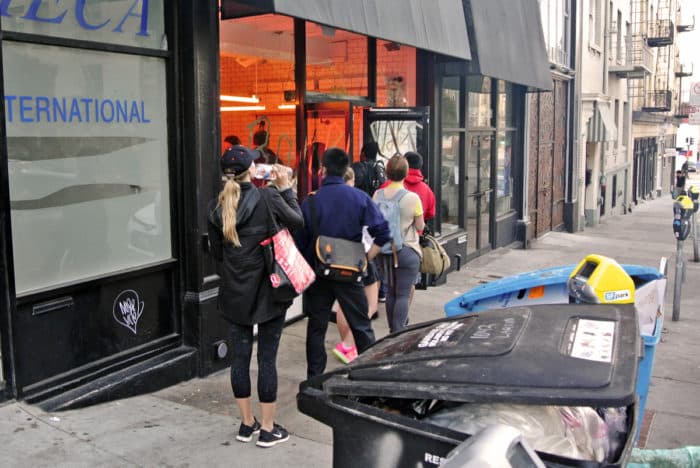 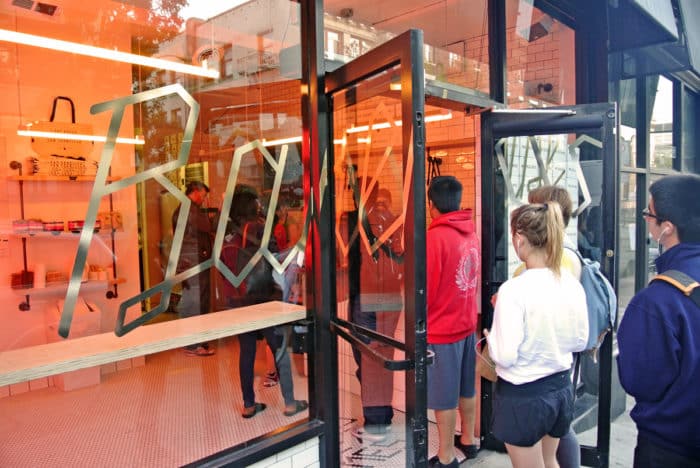 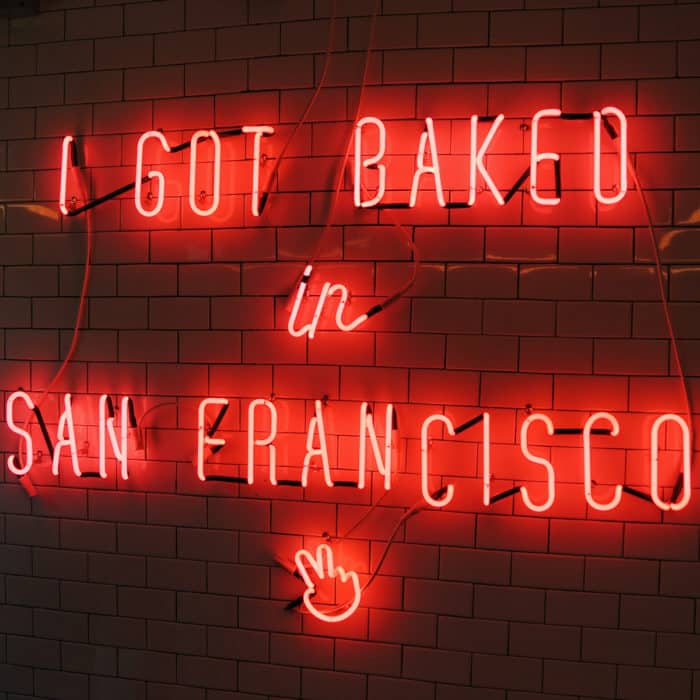 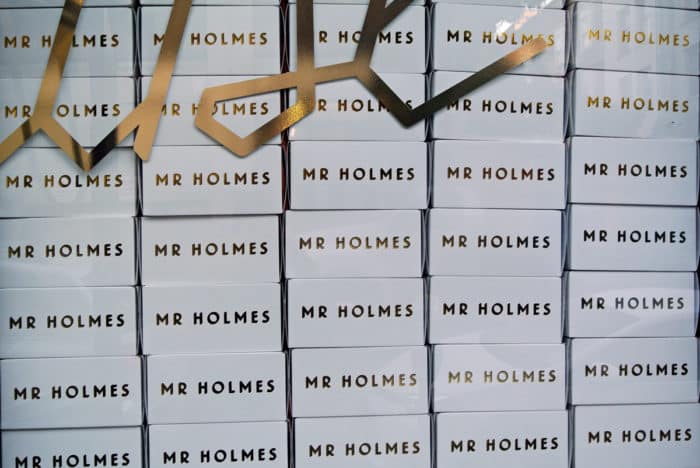 Surprisingly, only 5 minutes from the moment I had stepped in line, my transaction was already complete. I left the shop with a box of six incredible-looking sweet pastries — but, NO CRUFFIN. No Cruffin? Yeah, I had to learn the hard way that Cruffins don’t actually come out until after 9:00 AM, so I had to select six alternates instead.

So, if I was going to get my hands on some Cruffins for Amy’s big day, I was told that I was going to have to walk the five blocks home then return well before their official 9:00 AM release unless I was willing to face a much longer (and more unpleasant) line and risk the limited daily quantity of Cruffins selling out. Since there was no possible way to obtain this signature sweet treat at 7:00 AM, I headed home excited to present Amy with the shiny white and gold, but ultimately incomplete Cruffin-less box of goodies.

In any case, Amy was psyched about what I had brought home and we spent the morning sinfully sampling each of the six decadent creations before she had to head off to work. In my assortment, I selected only sweet pastries — they have many interesting savory varieties as well, but I focused my attention to sweet. My choices included: a Blueberry Brioche Bomb, a Fig Walnut Danish, a Chocolate Croissant, a Strawberry Lavender Muffin, a Blueberry Scone, and a gigantic Donut stuffed with Strawberry-Banana filling. 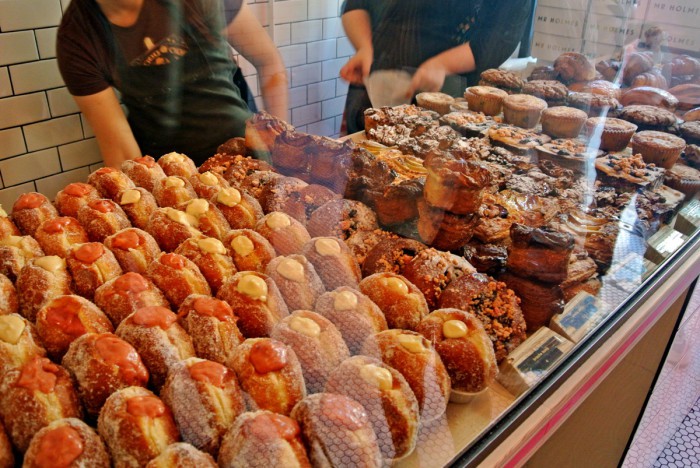 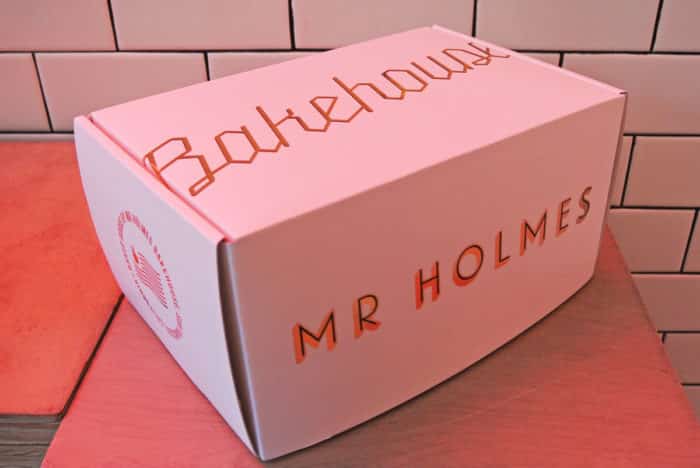 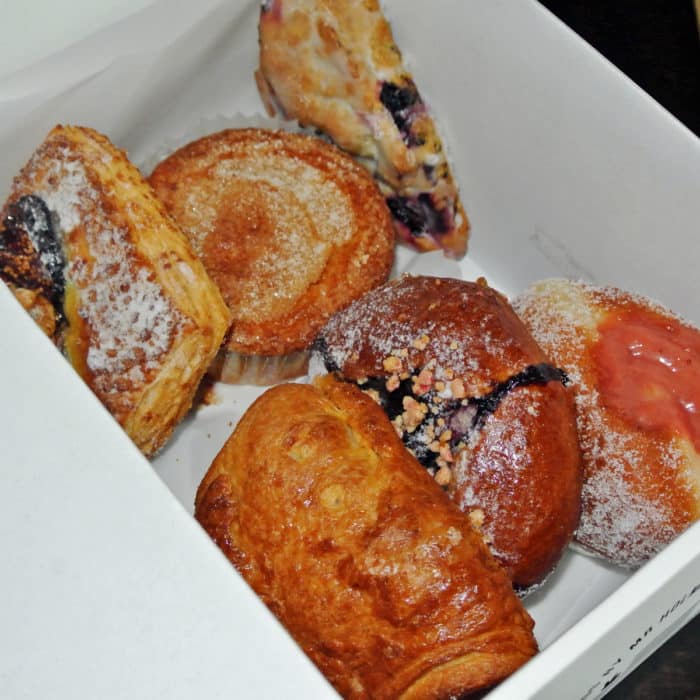 One by one, we cut off a sample wedge-shaped sliver of each so that we could experience them all without inducing a sugar coma so early in the morning.

First, the Chocolate Croissant. It was spectacularly flaky and had a pleasantly buttery undertone that balanced the silky smooth chocolate cream filling. This was quite an excellent croissant and I bet their non-filled version would be worth getting as well.

Next, the Blueberry Brioche Bomb, which true to its name had a much more bread-like dough consistency than the former and involved a deliciously sweet filling that contained big, plump, whole blueberries. This was nice, but the brioche bread style pastry wasn’t my favorite.

Then, we tried the monstrous Strawberry-Banana Donut, which had a truly unusual filling that tasted like a cross between a breakfast smoothie and overly tart tropical cocktail. Bizarrely, it tasted almost boozy — as if they had blended up a frozen Bourbon Street daiquiri or that it had begun to ferment like kombucha. Also, the creamy whipped banana and chunky whole banana filling consistency was a bit offputting. The donut dough was good, but the combination of those two fillings was a big miss for us.

After that, we went for the Blueberry Scone, which was easily one of the best scones I’ve ever had. The blueberry flavor came to the forefront, but it was the texture that really impressed me. It somehow kept both a nice crisp exterior, excellent crumbiness, and surprising moistness intact all at once.

Next, we sampled the Strawberry Lavender Muffin, which had both fruity blueberry and floral lavender flavors mixed directly into the batter. Again, amazing. The level of moisture was impressive and the crispy crust texture was outstanding. There was a great and delicious nutty quality in there as well. Also, the floral element was thankfully subtle and restrained. This is a lavender food I can appreciate.

And finally, the Fig and Walnut Danish, which had a similar flakiness to the excellent chocolate croissant, but was served open-faced with a generous topping that involved large fig hunks and whole walnuts. This was great too, but we quickly determined that our favorite of the bunch was the chocolate croissant, so we put down the danish and polished that one off together instead. 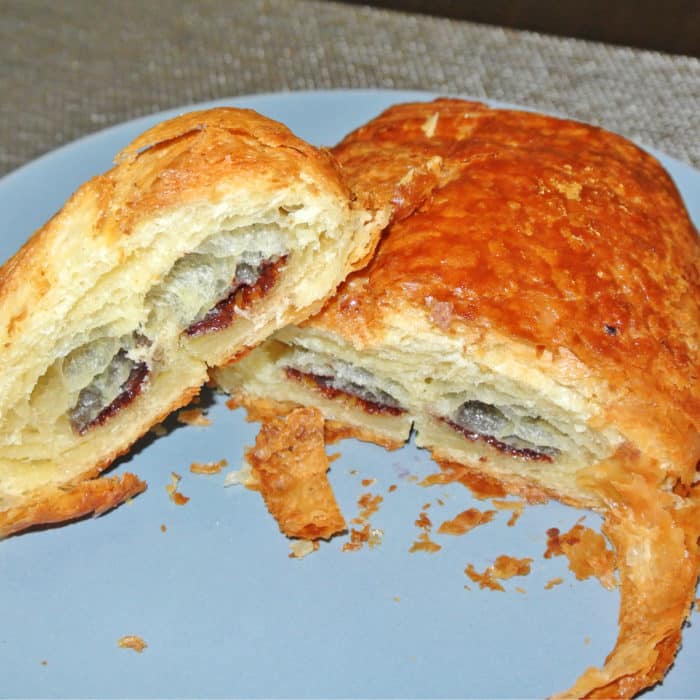 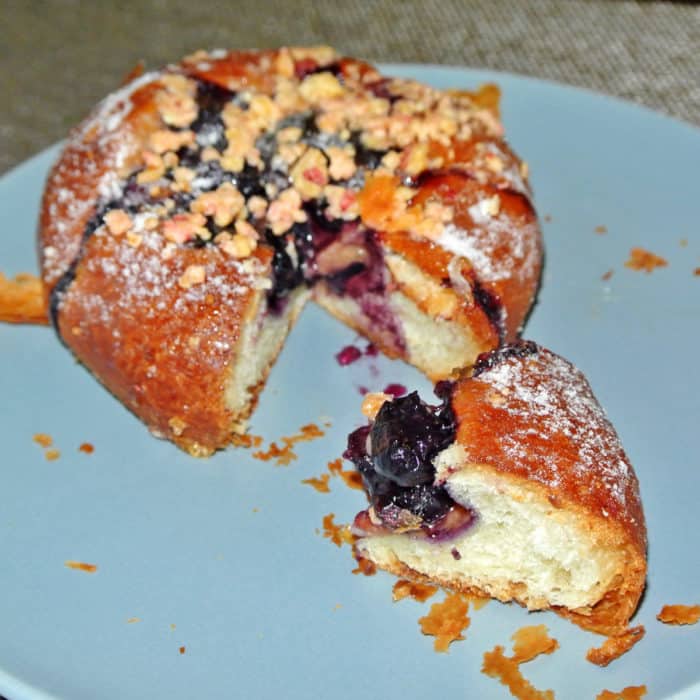 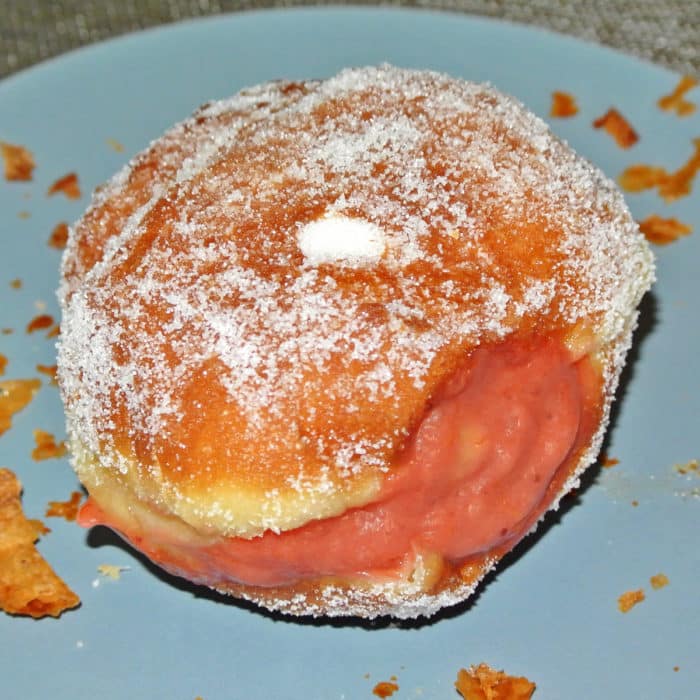 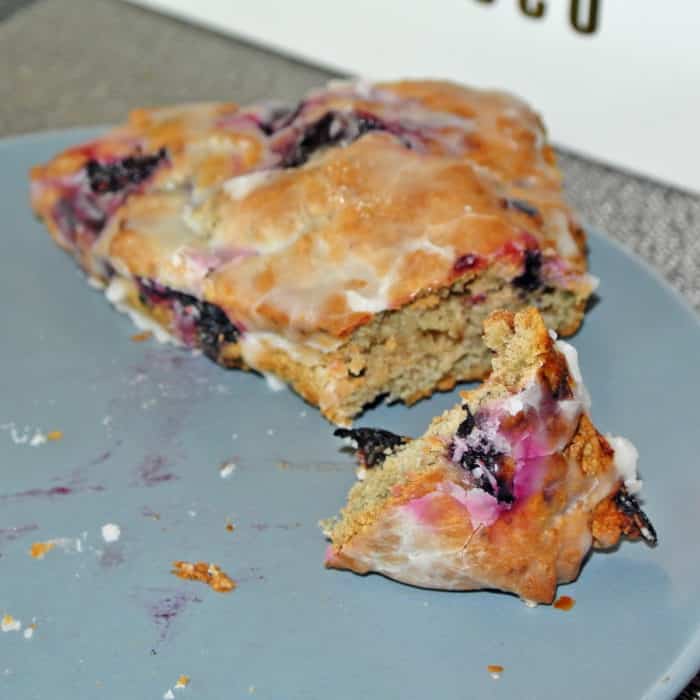 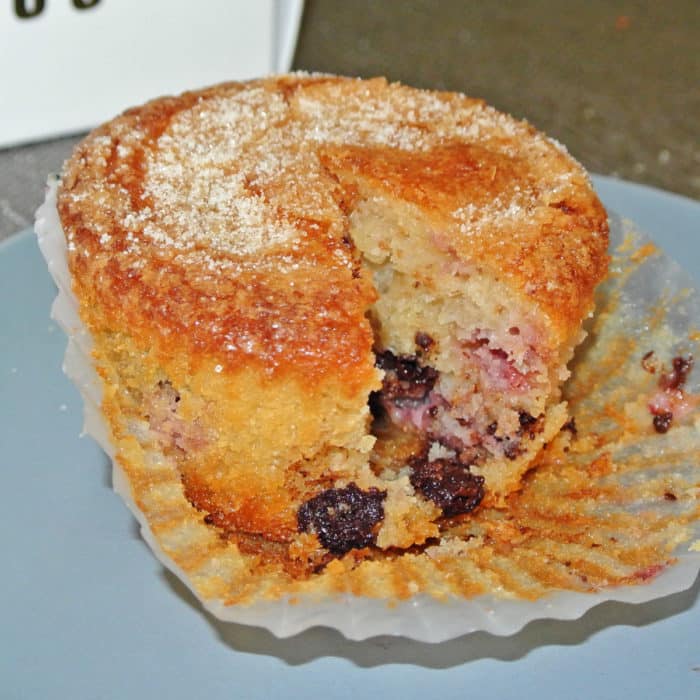 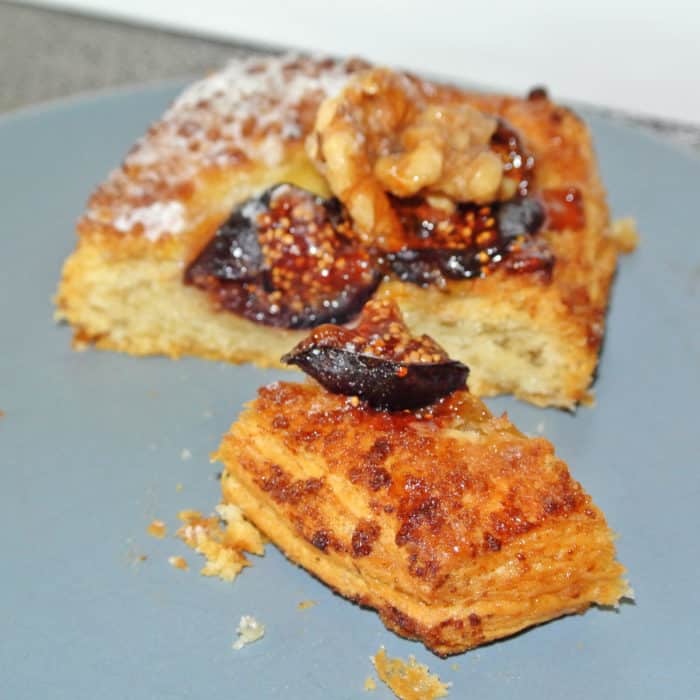 Buttttt, I couldn’t go this far and just NOT try the Cruffin. I was after all, already up and running uncharacteristically early in the morning and for some reason, on this day, the thought of waiting in a more substantial line in the cold didn’t make my blood boil. So, I suited back up, crossed my fingers, and left my apartment at around 8:30 AM to see what kind of ungodly line had already inevitably formed by 8:40 AM.

Ohhhhh, how naive I was just an hour and a half earlier. Yep, THIS was the daunting line I was expecting to find for a pastry of hype-level. It was about five times longer than the five-minuter from earlier and the Cruffin gates weren’t even going to open for another 20 minutes. But, I kept my cool, took my place in line, and marveled as the line doubled in size behind me as we approached the 9:00 AM mark.

At 9:07 AM, the line finally began to flow. At this exact moment, I overheard the girl behind me was unable to control her excitement and hysterically blurted out that “This feels like the entrance to Disneyland!!” Yes, well said Ms. Basic Bitch. Very much like Disneyland, indeed. 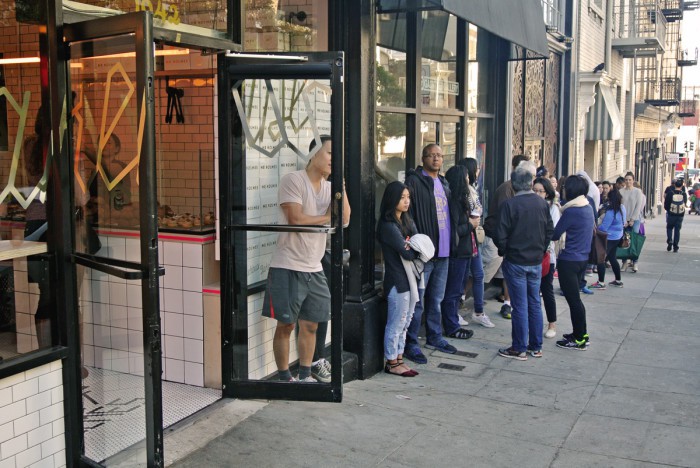 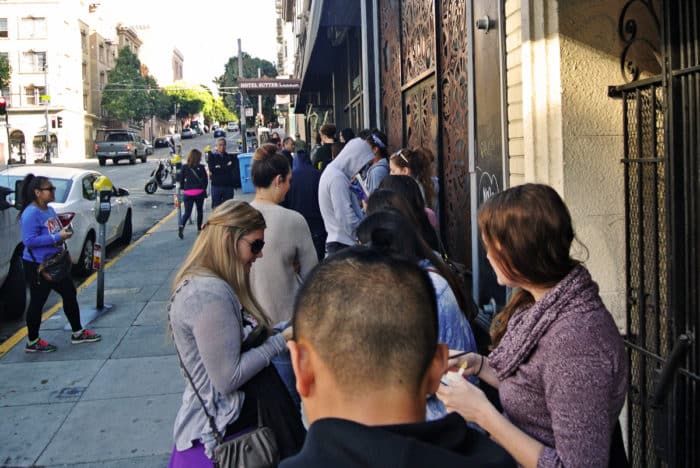 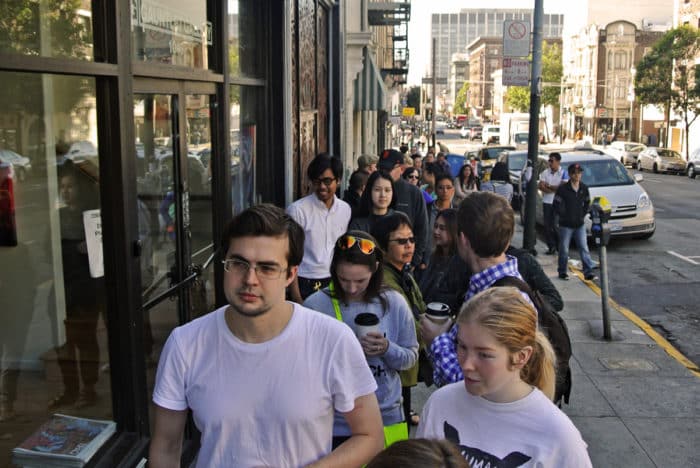 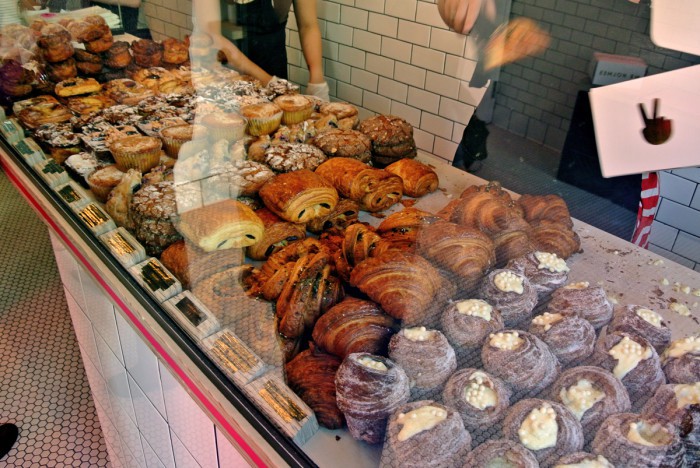 So, almost 40 minutes after embarking on my second Mr. Holmes Bakehouse line of the day, I had a new box of pastries in hand. This time, there was the Cruffin — of course — and a wildcard selection that I just couldn’t resist picking up as well.

Just like with Dominque Ansel’s cream-filled Cronuts, Mr. Holmes Bakehouse changes the flavor of their cream filling in their iconic claim-to-fame on a near daily basis. They range from exotic and fruity to classic and creamy and when I stopped in, they were offering White Chocolate Macadamia Nut Cruffins.

The framework of all versions of this inventive fusion pastry involves a towering croissant-like muffin structure coated in a flurry of granulated sugar. And inside this muffin is more flavored filling than you could possibly imagine. If you could envision pint glass made of croissant-like pastry that’s been turbo-injected with a bathtub’s worth of thick eclair-like cream, you’ll get sort of close. And you’ll have to come to terms with this fact — there is no tidy way to consume it. This thing will force upon you a super-messy eating experience every single time — there’s really no way around it.

Each bite of this behemoth peeled off a big, long, flaky, doughy, buttery layers of puff pastry — which revealed heaping globs of the thick, rich, white substance hidden inside. While the assembled pastry had rested, the white chocolate filling settled into all of the nooks, crannies, crevices, and intertwined inner layers and transformed them into an unusual custard-like consistency. Everything about this thing was aggressive and brash. From the level of sugary sweetness to the sheer magnitude of the creation — it was in-your-face creamy and over-the-top sweet and I think that’s why its fans love it. All in all, it was a rather overwhelming treat for someone like myself who is relatively sweetness-resistant, but I bet all you sugar-junkies out there will absolutely love it. 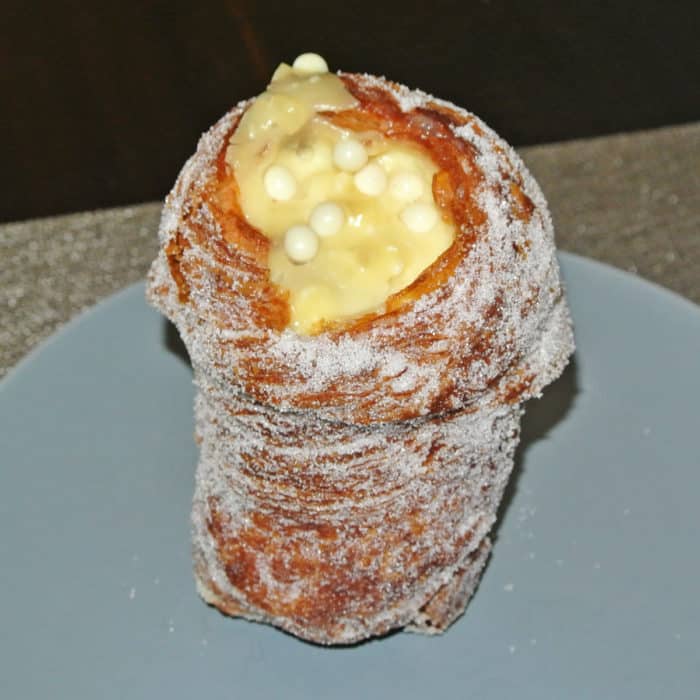 The Cruffin may not be for me, but if you’re looking for an alternative that’ll really knock your socks off, I’d recommend going for the item I selected as a wildcard — the Bread Pudding. For $4.50, I got a monster of a pastry that could easily satisfy the carb-filled, cinnamon-swirled dreams of two whole people. This thing was downright hefty — made with pull-apart layers of fluffy brioche bread that had been completely soaked with and smothered in a glorious mixture of cinnamon, apples, sweet raisins, runny caramel, and a generous dusting of powdered sugar. This thing was sticky and messy and just the right amount of sweet for me. This, my friends, was the big winner of the day at Mr. Holmes Bakehouse. 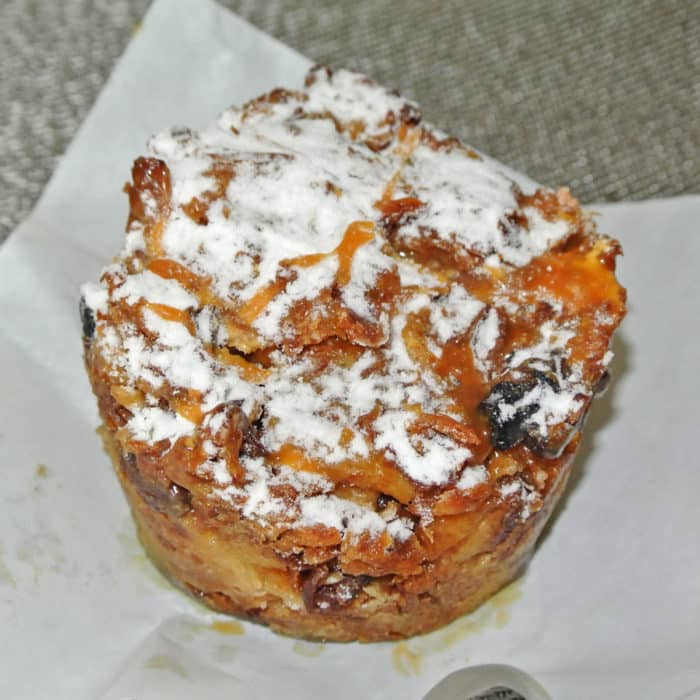 So, would I return to Mr. Holmes Bakehouse again? Well, yes. If I was in the mood for a decadently sweet treat and felt like splurging, I’m sure I could find something awesome to scratch that itch. But, I don’t think I’d necessarily bother putting in the extra effort for the super-famous cruffin a second time. I found that it was overly sweet for my taste and not worth the extra hassle — especially with so many better alternatives in store that don’t require the additional line.

And, if you’re feeling extra crazy and truly want to wait in a worthwhile food line in the neighborhood, head around the corner to the super-famous Anthony Bourdain-approved 100-year-old seafood shop that I love so much. Yeah, after I completed the Cruffin line, I went straight to the even more daunting Swan Oyster Depot line — I did both lines in a single day!!!! Cheers to the absurdity of LINEPOCALYPSE!! 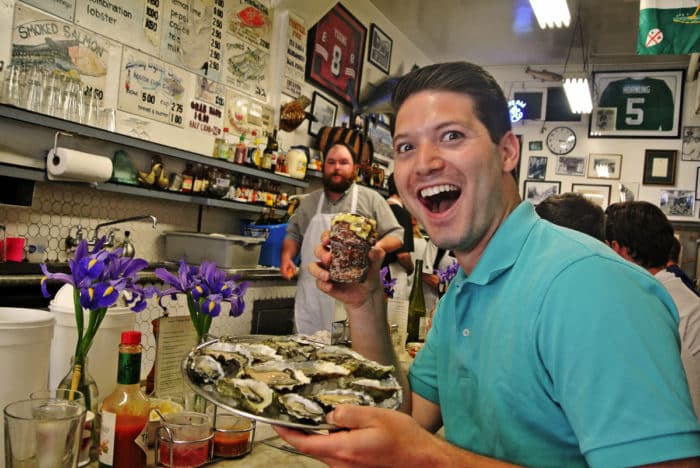 Got another ridiculous food line in San Francisco that you think is worth waiting in? Let me know in the comments below.