On the long drive between Paso Robles and San Francisco, there’s not a whole lot of viable places to stop at for a good meal on the road. The 101 is the most efficient route, but it’ll still take approximately three hours from start to finish. Before embarking on the drive back from the wonderfully quaint wine town of Paso Robles, we knew wanted to grab a quick meal close to town before really hitting the road.

A brief bit of online exploration led me to a place that showed potential for a quick meal. Just a 10-minute drive north of downtown Paso Robles, just off of the 101, there’s a dusty little nothing town called San Miguel. In this practically non-existent town, I read about a place with a 4-star Yelp rating that included many stories characterized by its local charm. We had high hopes that The County Diner, a lonely eatery in this desolate trapped-in-time town, would serve as a great place to get a quick and filling breakfast before we headed towards home.

We pulled off the highway and into town and identified the little shop by the smattering of plastic picnic tables splayed out front. Above the doorway, there hung a totally adorable hand-painted sign bearing the name The Country Diner and innocently quirky tagline “Where the locals meet.” So far, everything was lining up with our expectations of local charm.

We parked the car and walked through their creaky screen door entrace and were shocked by how compact the interior actually was. The place was basically a room with an eight-seat U-shaped counter and nothing more. It was super cozy and the service was extraordinarily friendly (the female owner seems to have been working the same shift for the past fourty years). But, there was something kind of offputting about the bizarro and excessively-countryish decor elements like the fake $1B bills glued to the handwritten menu overhead, the large tongue-in-cheek (I hope) Roadkill Cafe posters, and dried snake skin tacked to the wall bearing a sign that read “Linda’s PET SNAKE R.I.P. October 9, 1997”. Linda is The Country Diner’s owner — I really think that thing was her pet snake.

While we were there, it was all too clear that the only other patrons at The Country Diner were locals. All of the other guests were either extraordinarily friendly or extremely and uncomfortably lonely — everyone greeted us and everyone else inside with a “hello” as they entered. One guest that happened to be missing some fingers even offered up his entire life story unprompted. His very VERY strange, long winded, unusual, inappropriate, kind-of-racist, and uncomfortable tale became the backdrop to our experience. It’s the sort of atmosphere you rarely experience in major metropolitans, but this super-quaint mom-and-pop shop was certainly an interesting and story-worthy change of pace from our normal big city lives. 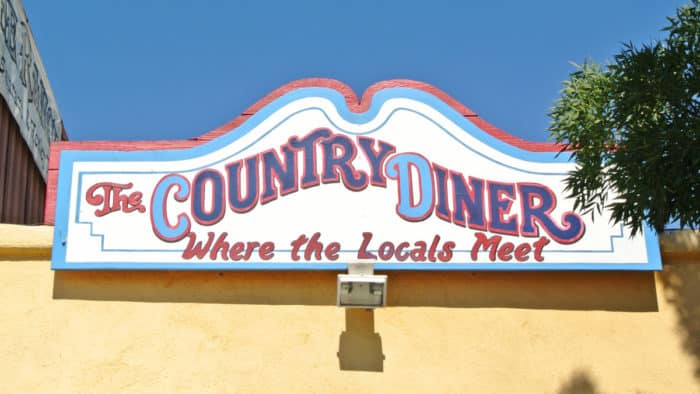 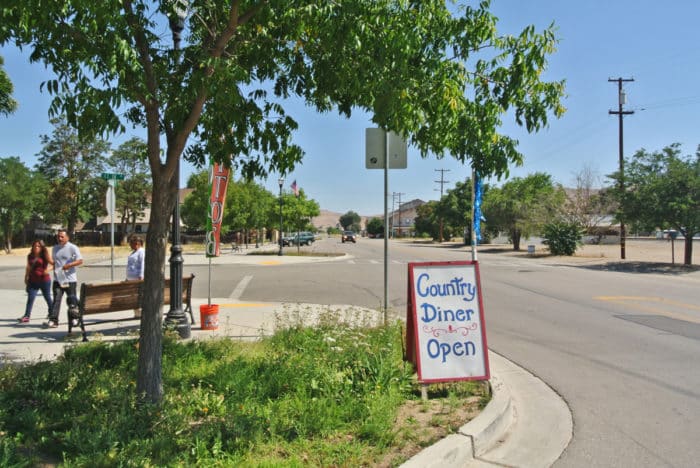 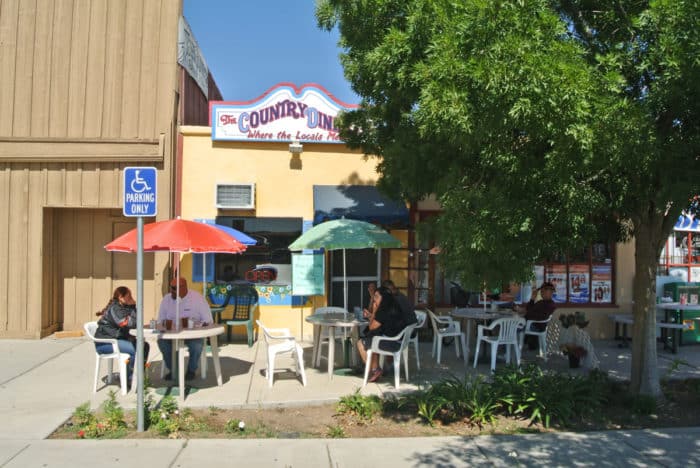 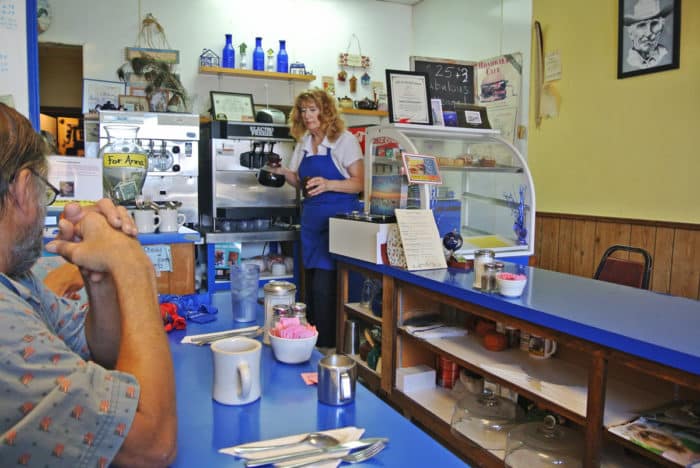 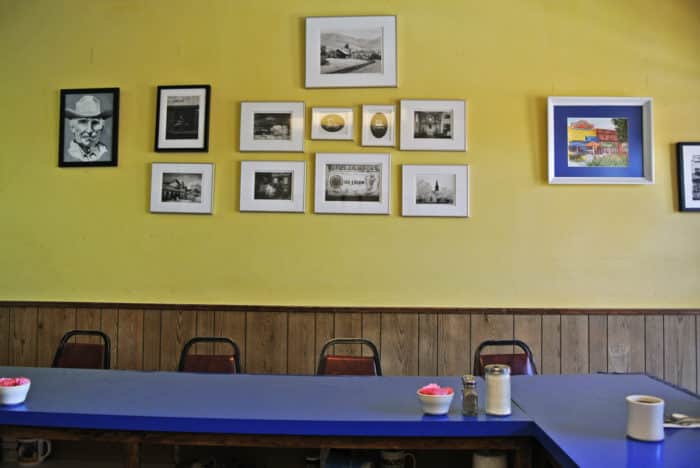 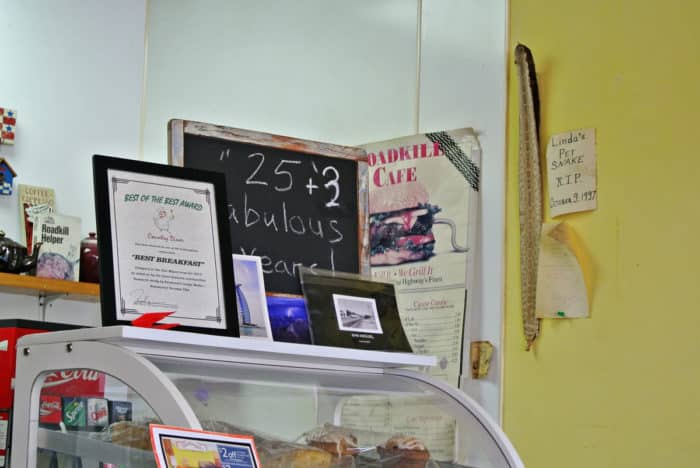 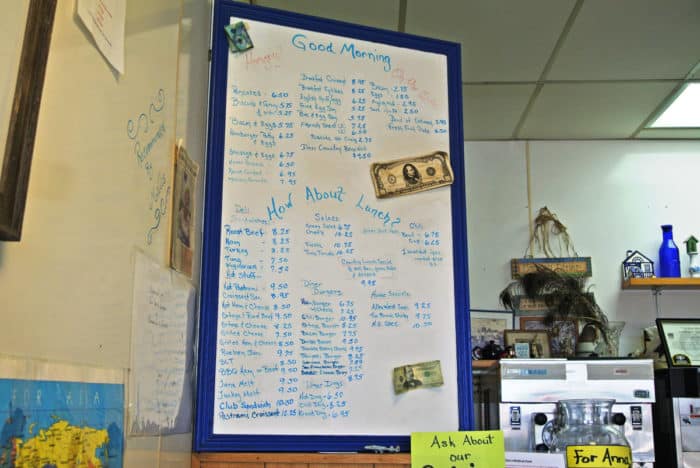 The breakfast and lunch menu was loaded with the usual diner fare classics — eggs, pancakes, sandwiches, burgers… the usuals. We had intended to pop in for a quick breakfast so we could get back on the road quickly, so we ordered some fairly straight forward egg dishes.

But, this was an entirely one-woman operation. Linda took orders from every person seated in the place then headed into the back kitchen to prepare everyone. We had no idea what we were getting ourselves into, but she went back there for 30 minutes to make all eight dishes at once. This definitely was not the on-the-go meal we had intended and had the unfortunate side-effect of trapping us into strange conversations about not-even-close-to-PC PowerPoint presentations with the townies.

So, we drank some unremarkable muddy diner coffee while we anxiously waited for our meals to arrive so that we could have an excuse to stop this guy from talking. 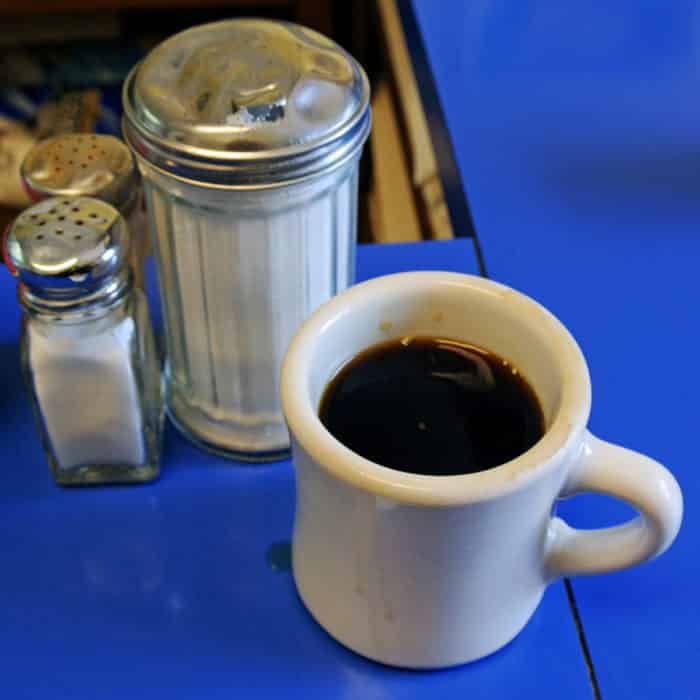 I selected the Mexican Scramble which involved jarred Ortega Chili and plenty of shredded cheese. The tortilla was nice and the salsa was good and chunky, but nothing else about it was particularly great. It certainly did the trick, but nothing worth going out of your way for. Honestly, I was just happy that food had arrived after 30 minutes of waiting. 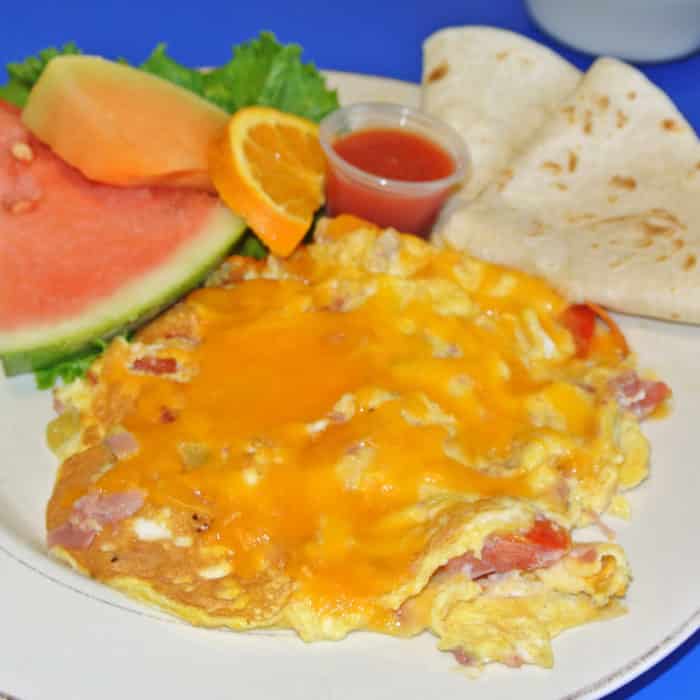 Amy adventurously opted for the Diner Country Benedict, which I thought was much tastier than the meal I ordered. Two poached eggs came over pretty decent biscuits and ham with a hefty white gravy topping. The gravy was a little goopy, but I did like the black pepper bite and runny yolk flavor combination. 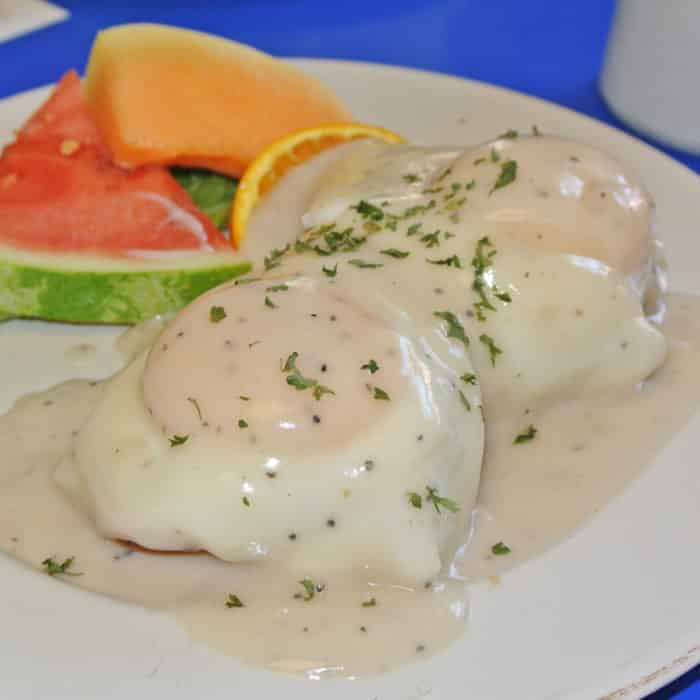 So, an hour in (a whopping 45 minutes longer than we expected to spend) and we paid our check and slipped out while saying our goodbyes to our new best friends. I’m not sure I actually liked much about any of their offerings, but this is clearly the type of place you go to for an other-worldly experience more than a great meal. The food wasn’t actually bad, but there was also nothing I actually choose to eat again. So, if you’re got the time and don’t care about the food being anything special, it’s a great place to have a unique experience and remind yourself of how quite a lot of the country lives.

Got another eatery on the 101 that I should check out next time I make the drive? Let me know in the comments below.