This is what happened when a craving that doesn’t often strike me, struck. Usually when I crave Middle Eastern food, it comes in the form of intense yearning for falafel or hummus. But, on this particular day, I needed to find an extremely meaty meal of kebab over rice and a quick search of the nearby Sunnyvale area brought Kabul, an highly-rated Afghan restaurant, to light.

Not too long ago, Kabul relocated from remote and infrequently trafficked El Camino Real location (near my favorite Silicon Valley hidden gem Himalayan Cafe) to a shiny, new downtown space near the recently built and constantly growing S. Murphy Avenue restaurant strip in Sunnyvale. Surprisingly, Kabul selected a location close, but not directly on S. Murphy. It’s only one or two blocks from the main drag, but I doubt it’ll get the same kind of wander-in traffic.

In any case, the new restaurant felt very spacious, clean, polished, and upscale with white linen table cloths, dark wood, and Middle Eastern decorative accents filling the space. As soon as I passed through the entrance doors, I found myself completely engulfed by the seductive, irresistible, and entirely intoxicating scent of Middle Eastern spices. This certainly seemed a great sign of things to come. It was just around noon and there were already many patrons already digging into their lunches with big smiles emblazoned on their faces, but there were still many empty tables in the place. Not to worry though, it’s still very new to the area. I’m sure with time, this upgraded space and location will attract more foot traffic to experience their exciting food. 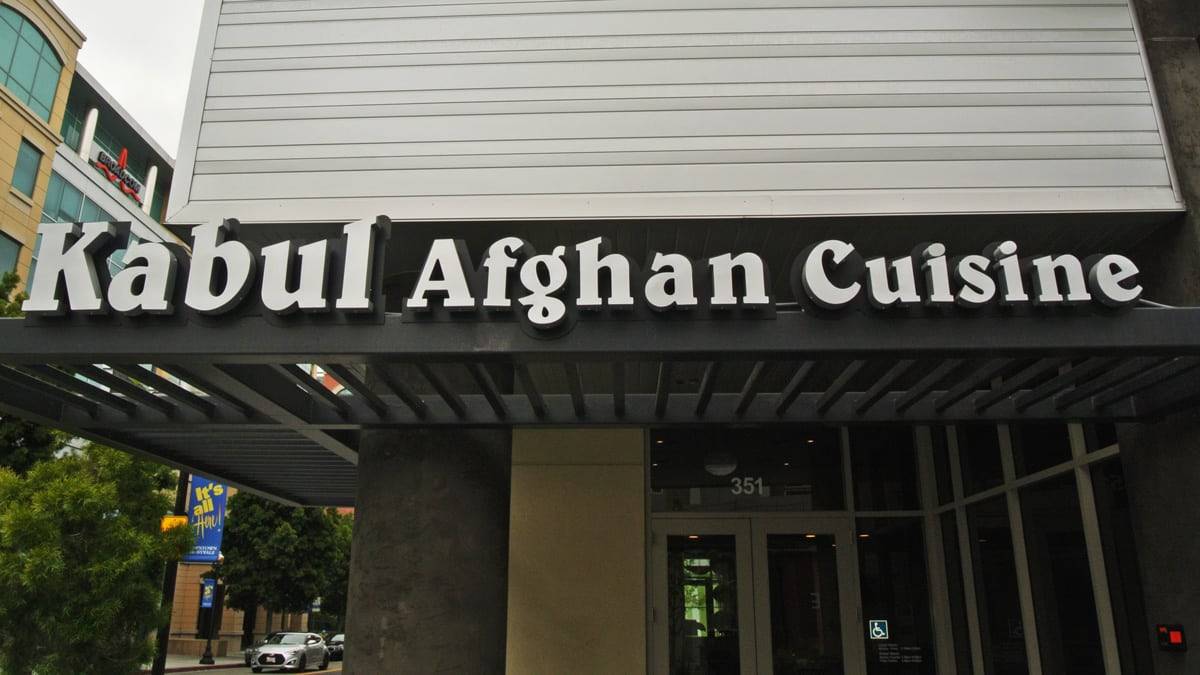 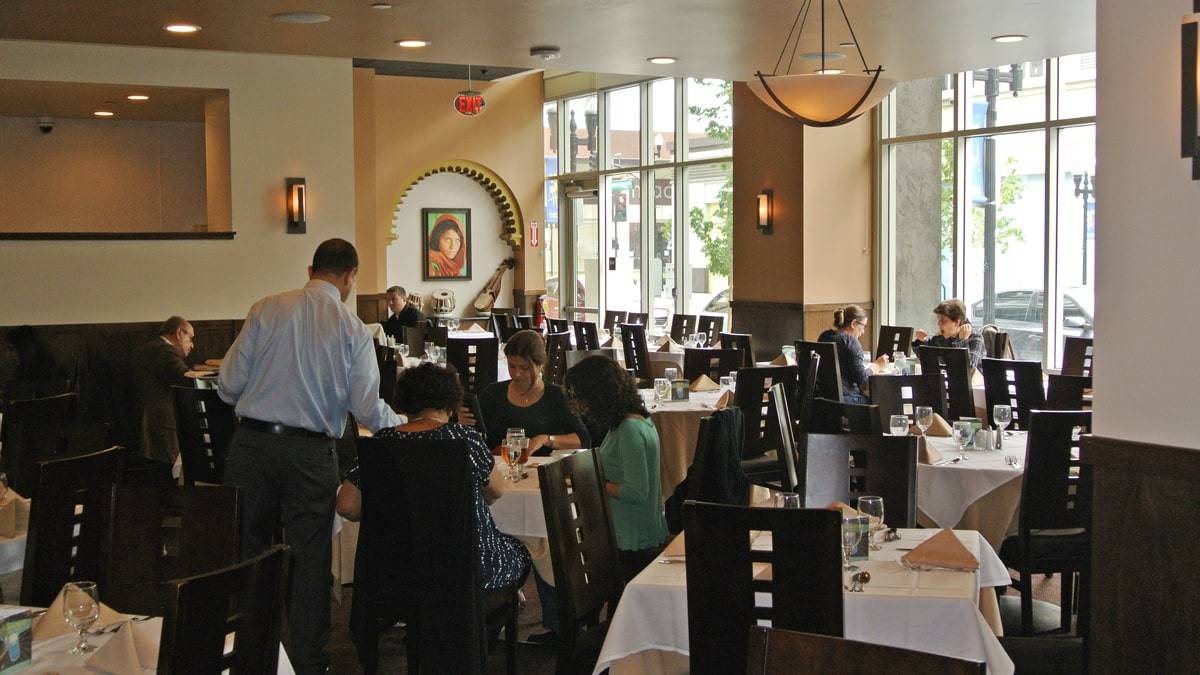 Once the two of us were settled at a table, we looked over the menu and found that it was full of unusual, foreign-sounding dishes mostly with names involving multiple hyphens. So to distill the offerings, we pulled out our phones and reviewed Foursquare tips before deciding to split an appetizer between us for $6.25 and each get an entire order of the much-raved-about-Lamb Kofte Kebab as mains. Price-wise, at lunch, most of the mains ranged between around $10 and $14 with the lamb platters sitting firmly near the top end of the spectrum at $12.95. It definitely struck us as a little steep for lunch, but we weren’t going to pass judgement until we had experienced the food for ourselves.

So, here’s one thing you should always remember about nearly every cuisine in the world — they pretty much all have some sort of dumpling in their arsenal and Afghanis have the Mantu to claim as their own. This large appetizer platter really looked nothing like dumplings. Instead it arrived as a slightly off-putting mysterious multicolored melange of slop that vaguely resembled an Indian curry. In fact, there was something a little bit appearance. But, sure enough, hidden underneath that smothering of orangey lima bean, carrot, potato, and tangy sour yogurt sauce mixture, there was actually a heap of mantu — large noodley dumpling pockets stuffed with a potent mixture of moist, flavorful ground lamb and chickpeas.

These were both unusual and incredibly delicious — made with flavors and textures that felt both foreign and familiar at the same time. We quickly plowed through the starter before we could actually figure out what the strange dish reminded us of — then it hit us. Believe it or not, to both of us, that sour yogurt-covered meat-filled dough concoction resembled none other than Mexican enchiladas. This extremely unique dumpling dish felt and tasted astonishingly similar to the doughy, layered, ground meat and sour cream covered dish we’re all so very familiar with. And I’m not saying it’s a bad thing. Actually, these mantu dumplings were outstanding and for only $6.25, I see nothing wrong with having something that tasted like Middle Eastern tinged enchiladas to kick off a meal. 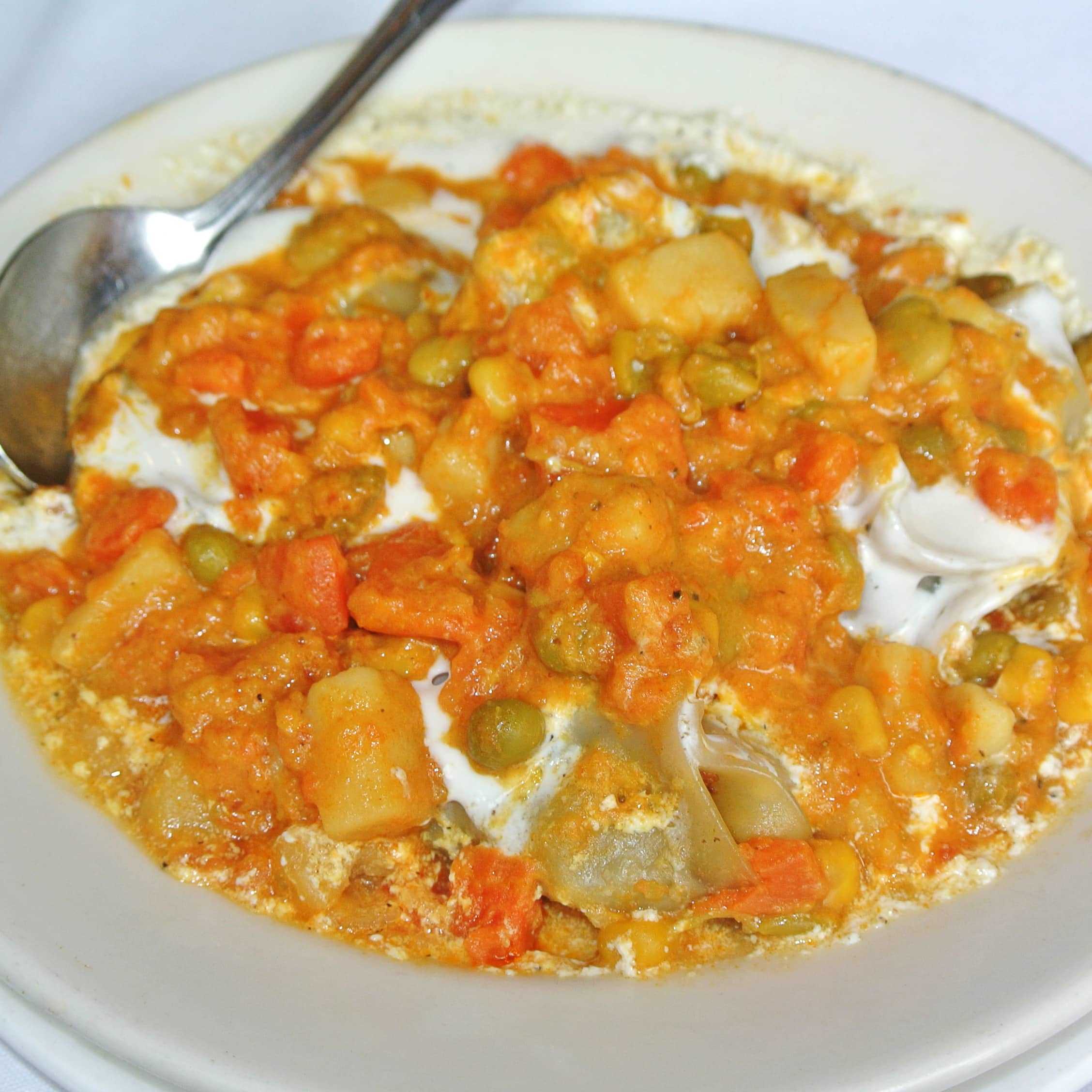 Then it was time for the main event – the dish that nearly all Foursquare tippers can’t seem to stop writing about – the Lamb Kabab-e-Kofta. I had heard that this particular lamb dish was not to be missed and I’m happy to say, it didn’t disappointed. For $12.95 at lunchtime (and $17.95 at dinner), my initial reaction led me to declare this dish expensive. But, that was before I saw how unbelievably massive the portion was. The roasted ground lamb kofte meat-log was longer than my entire forearm and was formed into an impressive thickness as well. Actually, this lunch portion was monstrous and in fact a killer deal.

But yeah, let’s get it out of the way now, this food wasn’t pretty. The mantu appetizer looked a lot like baby vomit and my main course strongly resembled a massive log of poo. I know you don’t want me talking about my food like that, but it just seemed like something that had to be said. OK, OK, now that we’ve gotten that out of the way, I can tell you freaking delicious it was.

The wonderfully well-spiced lamb came served over a heaping bed of pallaw, a Middle Eastern seasoned rice along with a large piece of Nan-e Barbari, a type of Persian flatbread – both excellent accompaniments. I also very much appreciated that the meat log had been marinated and seasoned aggressively. I enjoyed the juiciness that had been retained despite its medium-well doneness. But, it’s those incredible Afghani flavors where it truly shined.

Though the traditional cooking process, the meat took on a bold, charcoal-grilled flavor and the vibrant, fragrant Middle Eastern spicing sung with every bite. As another twist, there was a mysterious and distinctly purple-hued powder sprinkled over all of the plate’s elements – sumac. Though I don’t see it used often, this spice is used extensively in Middle Eastern cuisine as a seasoning on rice and meat to add a sort of lemony quality to the dish’s unctuous and umami-filled flavor profile. 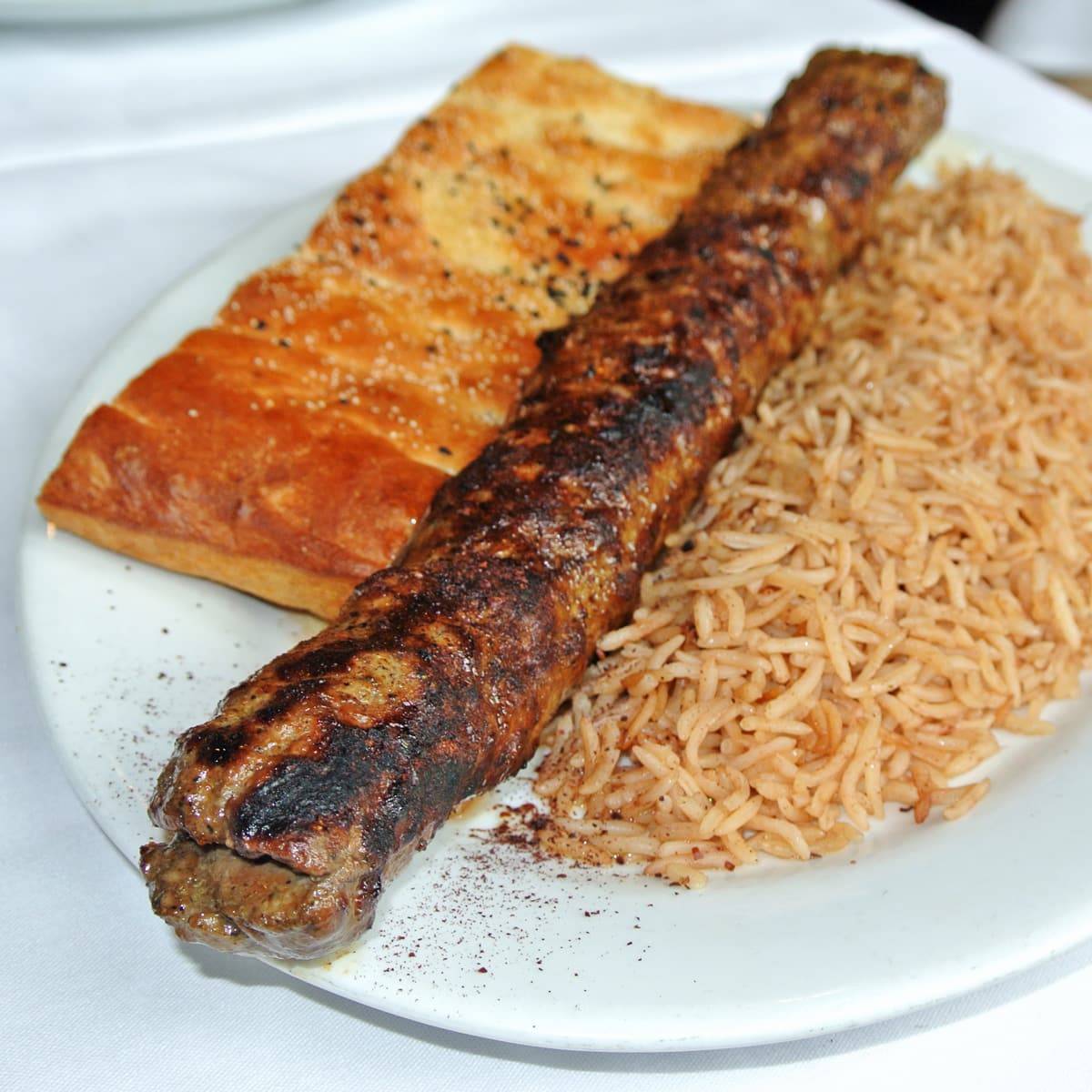 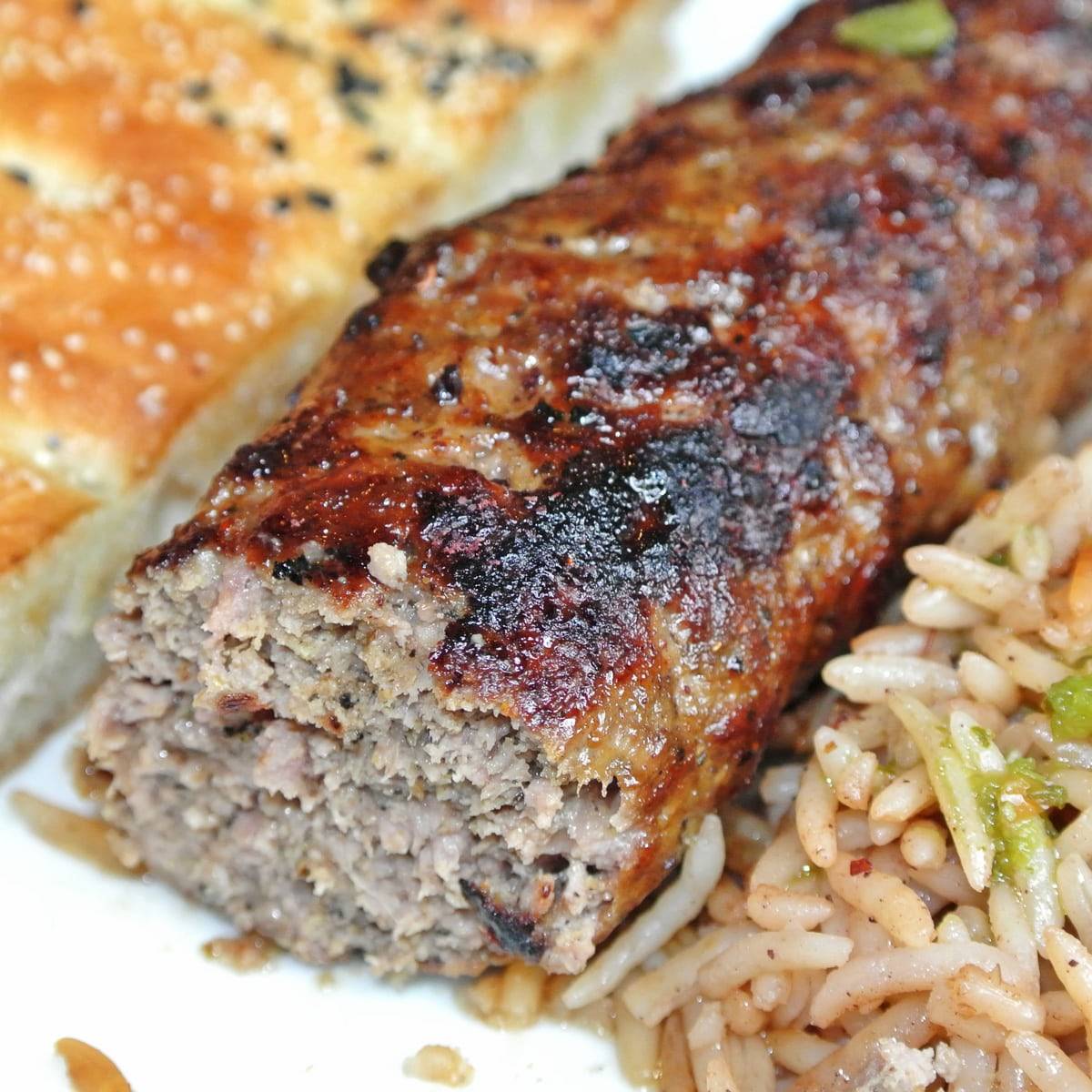 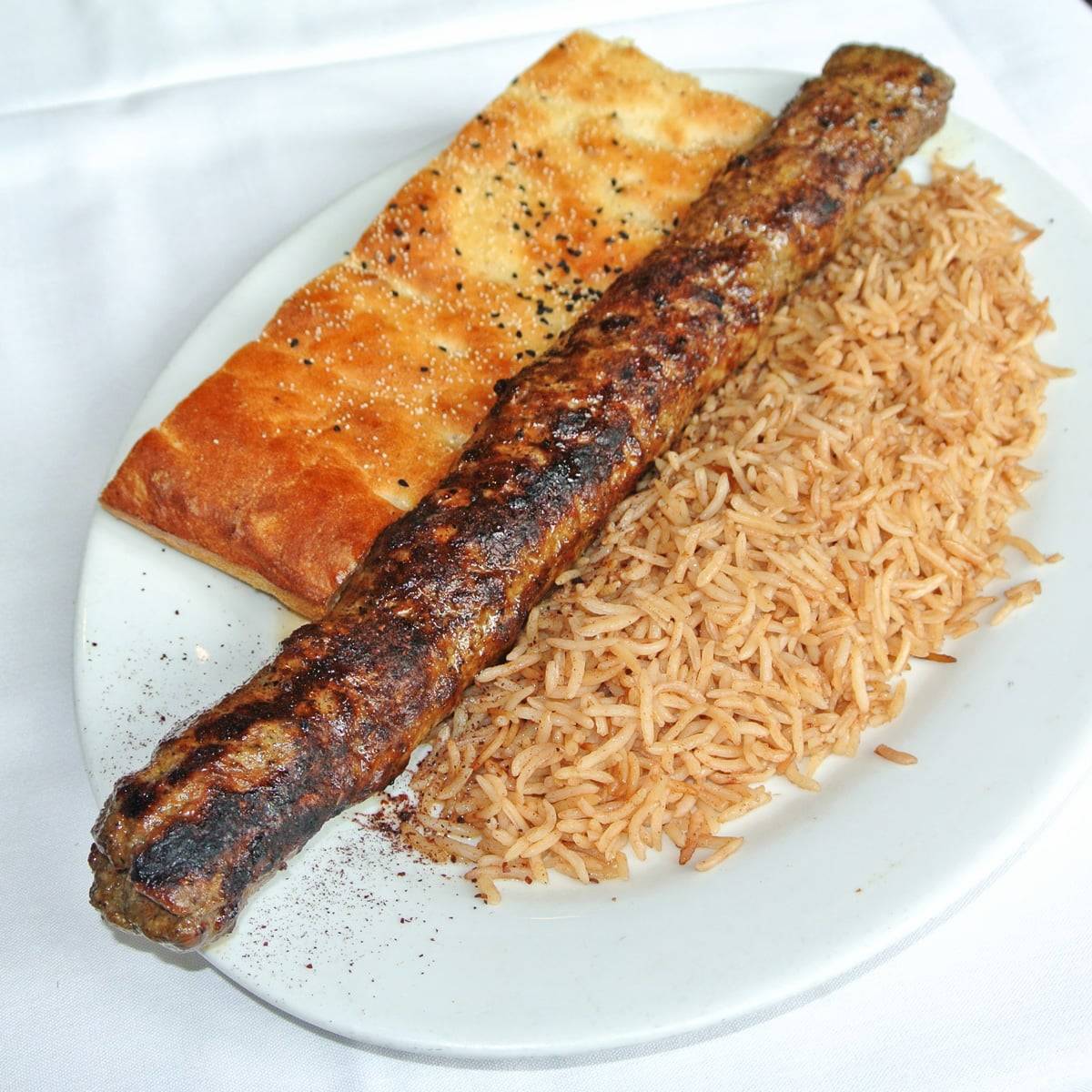 This thing really was great just as provided, but I have an extra-special pro-tip for dining at Kabul – ask your server for the secret, off-menu, unlisted chutney. If you do, he’ll come over with a glass jar of thick, chunky, bright green sauce flecked with orangey-brown bits. It’s insanely delicious, but also incredibly spicy.

Assuming the green hue was the result of herbs, I dumped a hearty spoonful directly onto my meat and rice and took a big bite without even a glimmer of hesitation – what a mistake that was. Yes, that chutney was made with a lots of fresh cilantro, but also included a ton of green chile peppers and not a whole lot else. I believe there was a bit of white wine vinegar, garlic, sugar, and walnut to balance the mix too, but those ingredients don’t do much to cut the condiment’s potency. This topping paired extremely well with all of the the already well-spiced and full-flavored elements of the plate, but I made sure to go a bit easier on subsequent bites. 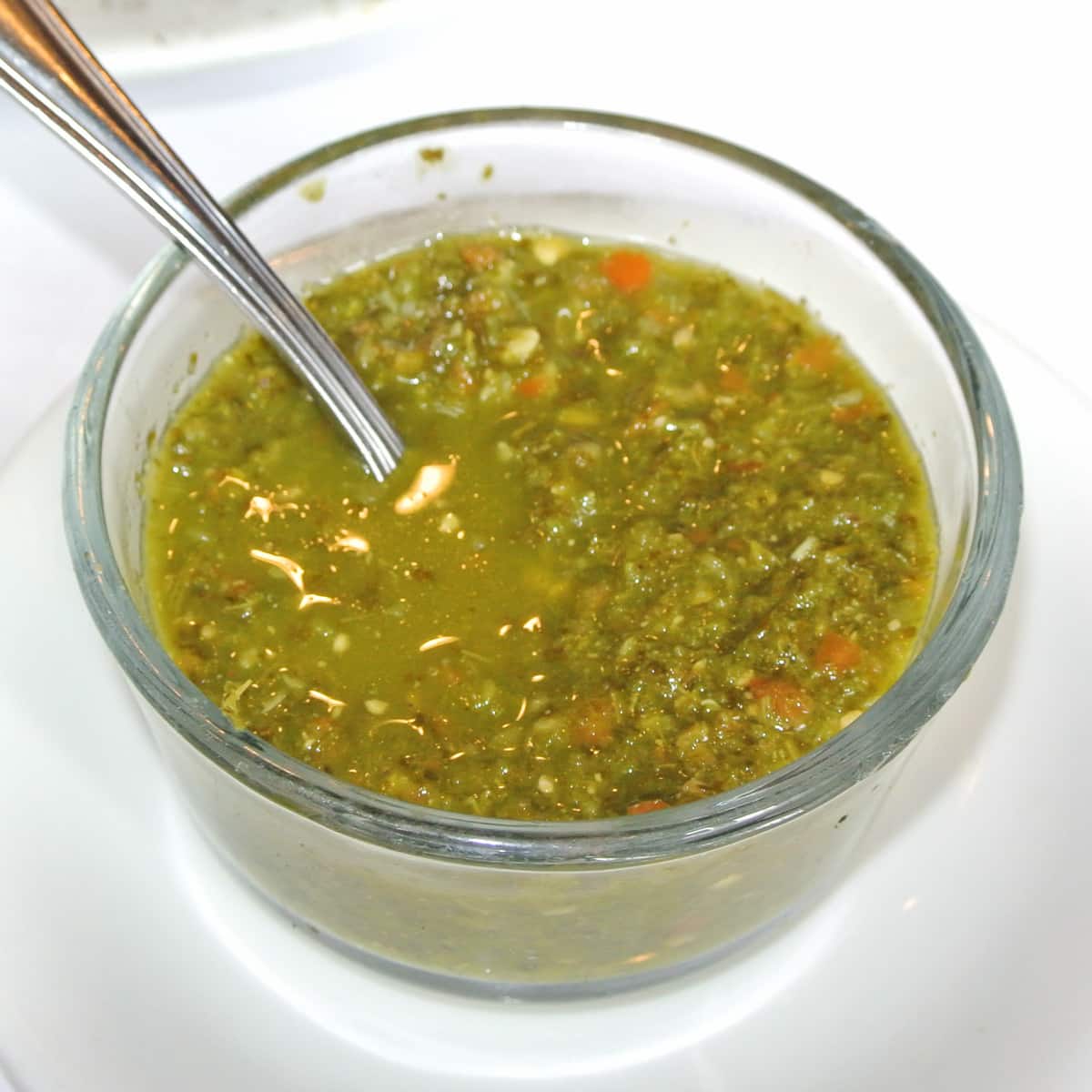 So, I’m really happy to have found another great, flavorful, unusual lunch spot in Sunnyvale. Kabul served me just about the juiciest, most flavor kofte I’ve ever had and those mantu dumplings were nothing to sneeze at either. No matter what you order, don’t forget to ask for the super-secret Afghan chutney. It’s so incredibly delicious, and I’m pretty sure it’ll pair perfectly with nearly everything on the menu.

Got another great Middle eastern spot in Silicon Valley that I should check out? Let me know in the comments below.