Acme Oyster House is one of those old school places that been around for so long, it’s almost become synonymous with visiting New Orleans. It’s famous enough to have been featured on a multitude of food TV shows including a particularly memorable season 1 episode of Man vs Food in which Adam Richman took down their insane eating challenge and joined the 15 Dozen Club by consuming an absurd 180 raw oysters in a sitting.

Due to their fame, popularity, and prime post-drinking French Quarter location, Acme usually has lines out the door, but we (I guess) lucked out that our visit occurred on the verge of a hurricane that brought torrential rains strong enough to serve as a tourist deterrent. We were seated immediately in the rear dining room and sucked in a deep breathe of that gloriously roasty, toasty, signature smell that filled the entire restaurant.

The decor was an unusual balance of homey Southern and low-key dive bar aestheic. Between the pressed-tin tile ceiling, hazy glow of neon, and scattered placement of TVs overhead, and checkerboard cloth-topped tables, it really set the mood. It looked like the place was loaded with both tourists and locals alike, though on second glance I think I changed my mind – it was pretty heavily populated by awkward tourists. 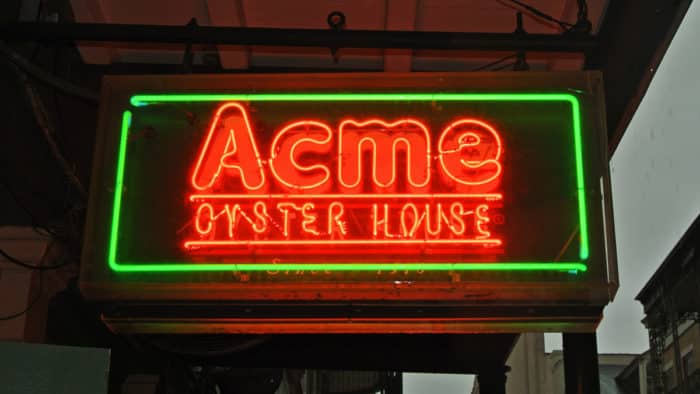 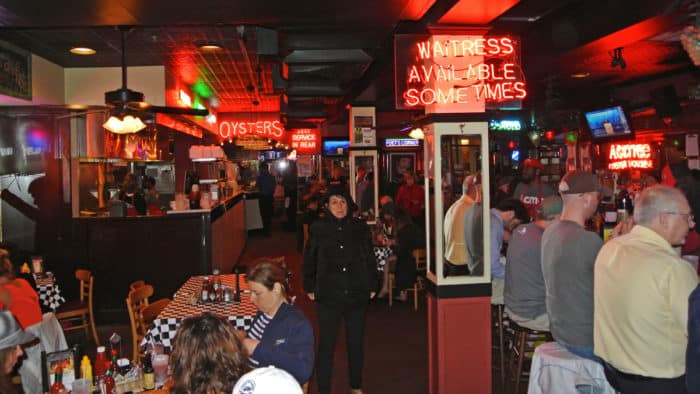 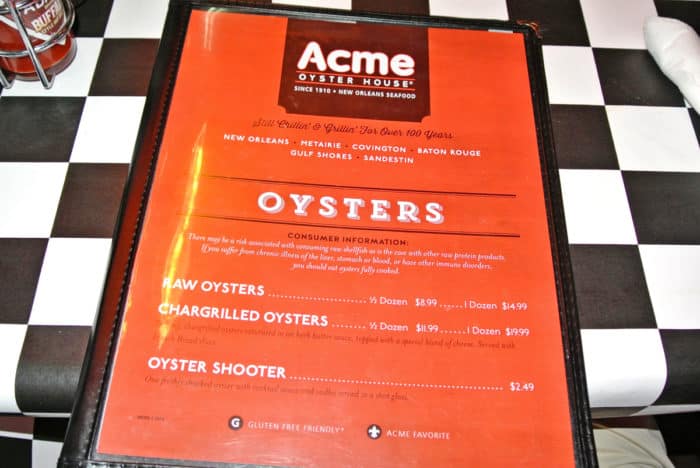 We may have gone to Acme for one thing and one thing only, but that didn’t stop me from grabbing a quick drink while we waited for our food to arrive. For only $5.50, I got a damn good, spicy, simple, strong, and straight-forward Bloody Mary.

It kicked hard – aggressively spiked with hot sauce – probably Tabasco if I had to guess, but the pickled long bean and pickled okra garden served a nice, cooling counterpoint. I really enjoyed the drink, loved the sour garnishes, and appreciated the very reasonable price too. 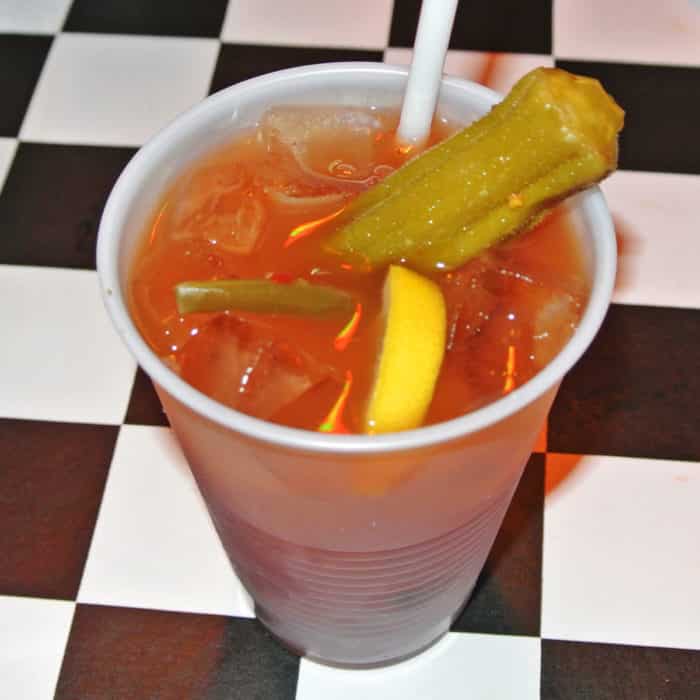 Despite the allure of the menacing tower of raw oysters featured in the Man vs Food eating challenge, that wasn’t the dish we were there for. We were there to experience their world famous Char-grilled oysters. Literally every table in the house had an order. It’s also the dish responsible for the intoxicatingly buttery odor filling the space. So, we got a dozen.

To make this famed NOLA staple, Acme encrusts each massive, local gulf oyster in their signature blend of garlic, breadcrumbs, secret spices and of course plenty of grated cheese and butter.

Each shell comes out piping hot – flame-broiled until blackened and charred – to all these oysters to burst with obscenely rich and buttery spiced flavor. The plump shellfish are especially killer when plucked immediately from their crispy encasement, transferred directly onto a piece of the provided soft, fluffy, white bread, then consumed whole. There’s such an intense butter-forward umami explosion in every decadent bite – it’s what you come for. They really do live up to their drool-worthy, line-generating reputation although, we did admittedly get a teeny tiny bit of broken shell grit from sloppy shucking in one or two of them. So be it, worth it. 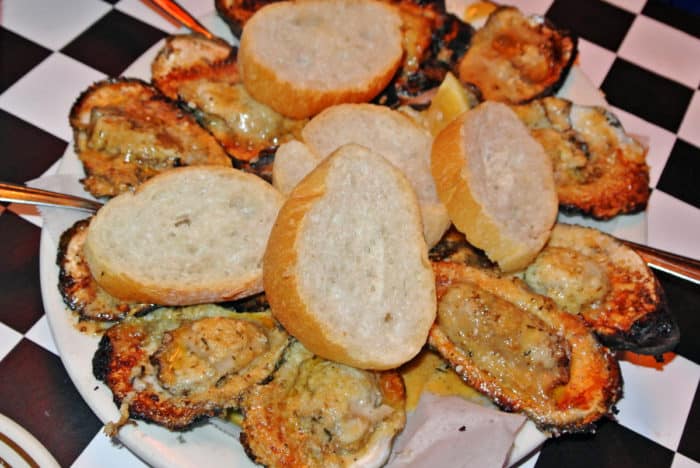 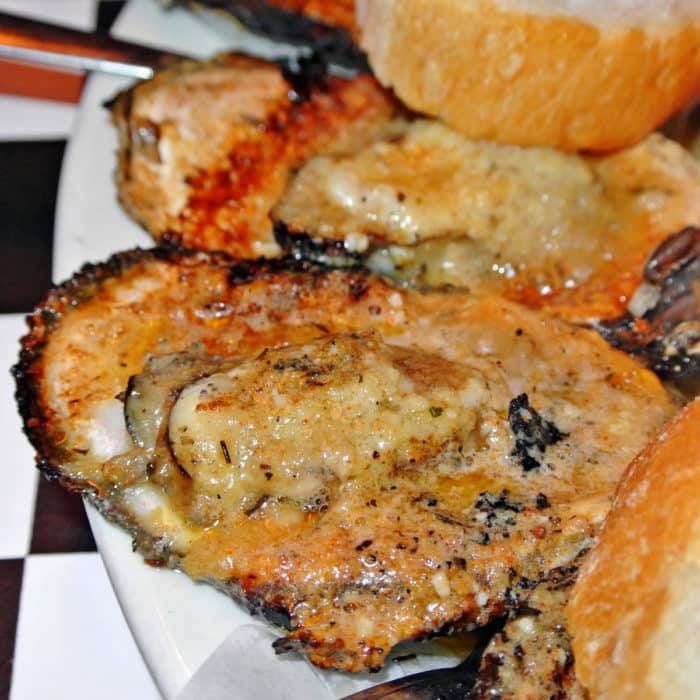 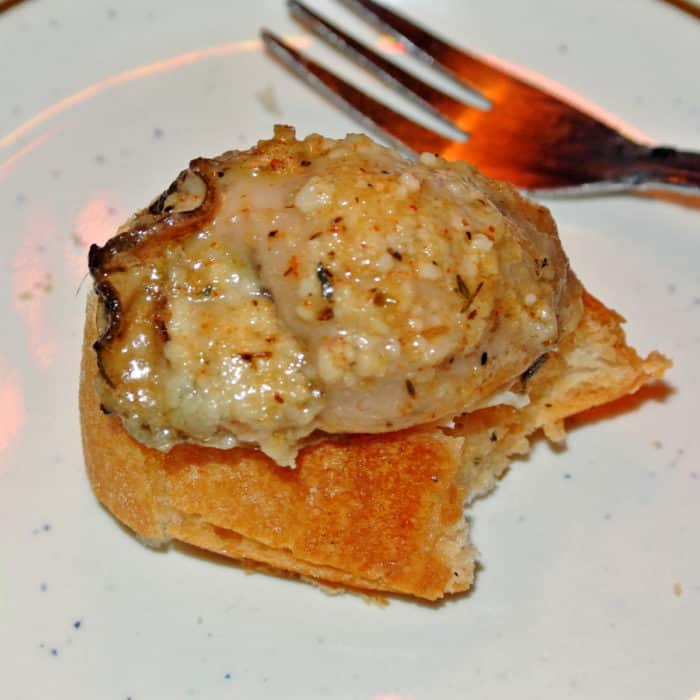 All in all, the famous char-grilled oysters at Acme Oyster House were everything I expected and more. For a hearty, rich, buttery, flavorful cheap-eats fix in the French Quarter, they more than did their duty. I’m just glad I didn’t have to endure one of their unreasonable ever-present lines to get seated and served to experience them.

Got another great cheap eats spot in NOLA that I should check out? Let me know in the comments below.