This shop is in a nondescript shopping center just off of the busy Route 34 main drag in Matawan, New Jersey. From the outside, it’s nothing to look at. And really, from the inside, it’s nothing to look at either. Service is almost non-existent (it’s partially a self-service operation and the staff is pretty surly). Basically, you walk in, seat yourself and a man will come over and plop a stack of unordered plates, bowls, silverware, spoons, chopsticks, and napkins at the end of the table for you to distribute and arrange by yourself. As high-school aged kids in NJ, this stern, spartan, service style never bothered us, but returning to it a few years later, it definitely left something to be desired.

It’s not often I find myself back in this part of New Jersey, but this occasion led us all to a particularly brutal hangover. A trip to Shanghai Bun seemed like the only way to alleviate the pain and get some heavy carbs and hot liquids flowing into our ailing bodies. Once we were seated and settled, we looked over the two red, double-sided paper menus provided along with a pen. We were instructed to mark the paper menus with out desired order to submit to the kitchen – an archaic and impersonal technique that isn’t necessarily pleasant or inviting, but is definitely effective and efficient for the restaurant. We decided as a group on our order, marked our menus, and only a few moments later the first of our many soothing, hangover-crushing comfort foods began to arrive. 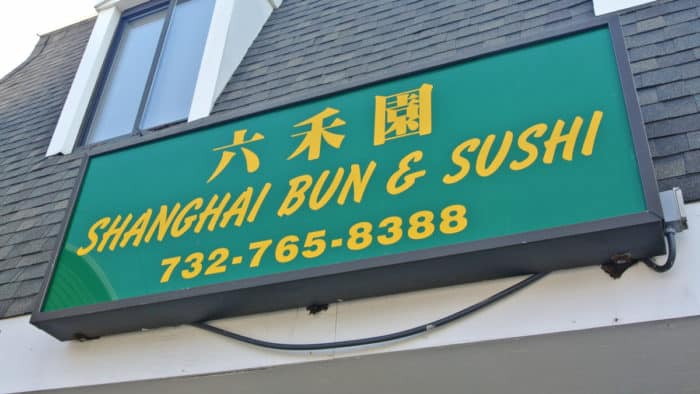 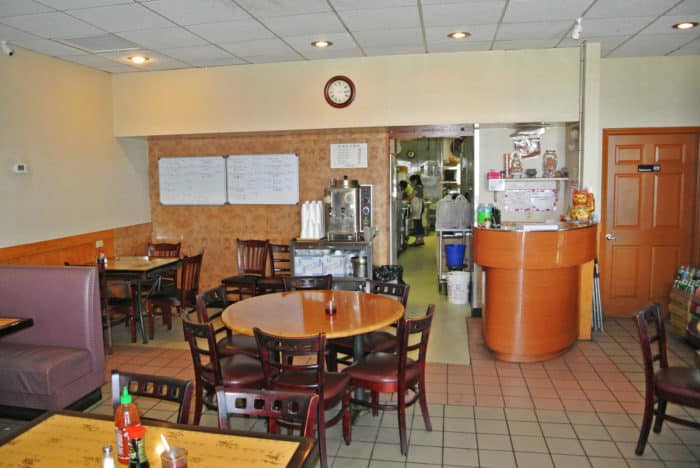 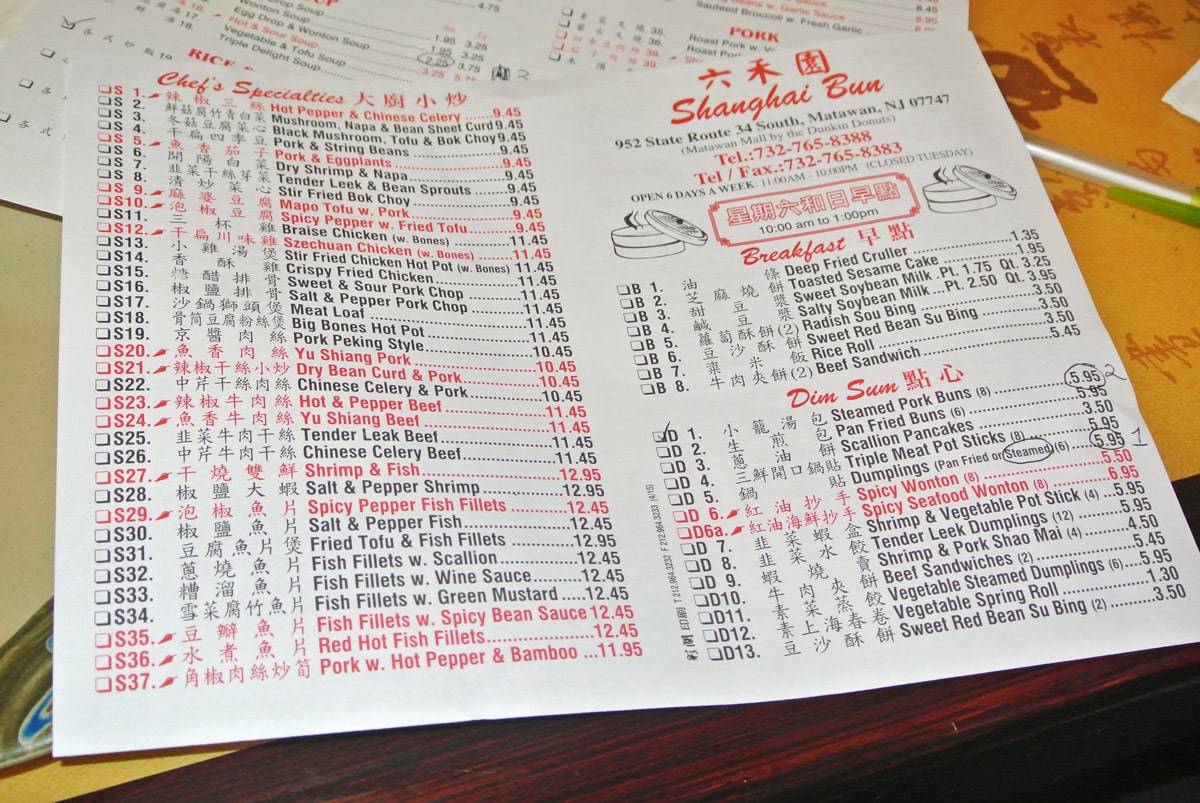 First, the small Egg Drop and Wonton Soup which could hardly be described as “small”. For only $2.25, the bowl was absolutely enormous and was filled to the brim with a thick, gloopy, yellowish liquid laced with large wavy tentacle-like strands of egg whites. The bowl also included two very large and unusually thick-skinned wonton dumplings.

The soup was quite thick, too thick for my taste, likely enhanced with too much corn starch. And the wontons were very chewy and noodley – possibly past al dente and into under-cooked territory, but at this price, I wasn’t complaining. Even though the piping hot soup was served at a painfully scalding temperature and each spoonful required a solid 30 second of blowing to make it bearable, it was exactly what our hungover asses needed.

As a second hangover-killer, were ordered some Steamed Dumplings. These massive, monstrous noodle-wrapped meatballs were each adorned by a plume of steam that emanated from each hulking beast. Though they appeared to have been ferociously over-heated like the egg drop soup, we were shocked to find upon biting in that they were actually only lukewarm inside.

I’m certain we all would have appreciated these more had they been properly heated. But, those big, pink and brown speckled pork meatballs were actually still quite tasty especially after a dunk in the provided soy-based dipping sauce.

But, you guys already know the real reason why we headed to Shanghai Bun in the first place – to crush a couple steaming baskets of Xiao Long Bao. When I first experienced the XLB at Shanghai Bun, I wasn’t nearly as experienced with this specialty dumpling and didn’t know what qualities to look for. I didn’t yet have strong opinions on the subtle nuances that make some soup dumplings good and others truly transcendent. But now, after eating my way through many impressive and disappointing renditions, I particular about the exact right size, skin thickness, broth flavor, and meatball consistency that is necessary for perfect XLB. I now also realize how spoiled I was to have a solid XLB shop so close to home – it’s absurdly difficult it is to find shops that are able to do them right.

Yes, Shanghai Bun was my first and for that, they’ll forever remain fondly in my brain. But, now that I’ve had the chance to revisit this sacred eatery from my past and can critically reflect, I’m not sure they lived up the vision that’s been permanently imprinted in my head for the past 10 years.

Sure, these these Xiao Long Bao scratched that itch, but they were also technically flawed in a number of ways when compared to my all-time favorite XLB spot in NYC. If I wanted to be super-critical, the skins were a touch thick – they should be very delicate and semi-translucent – so delicate that you should fear accidentally puncturing the soup-bearing wrapper. There was a nice amount of liquid inside, but I do prefer my broth a little richer and porkier. And the meatball was pretty tender too, but my very favorite XLB fillings have an almost crumbly consistency when bitten into. 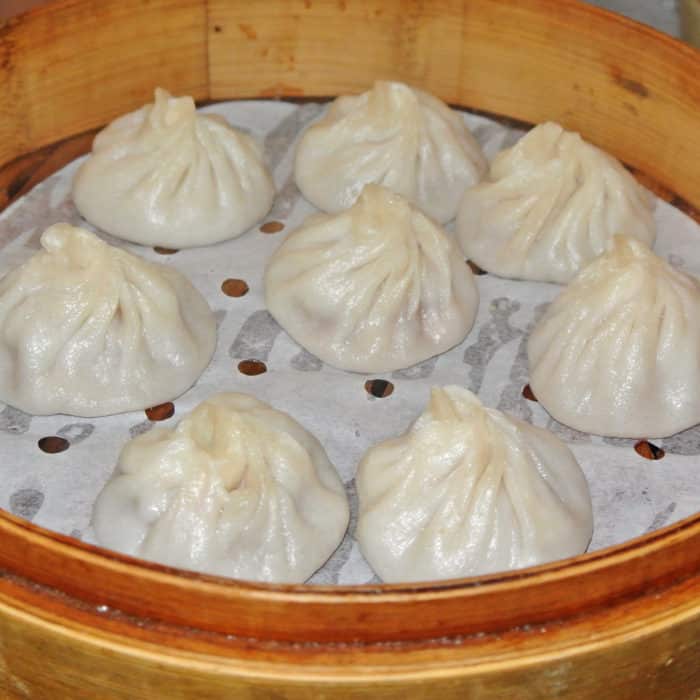 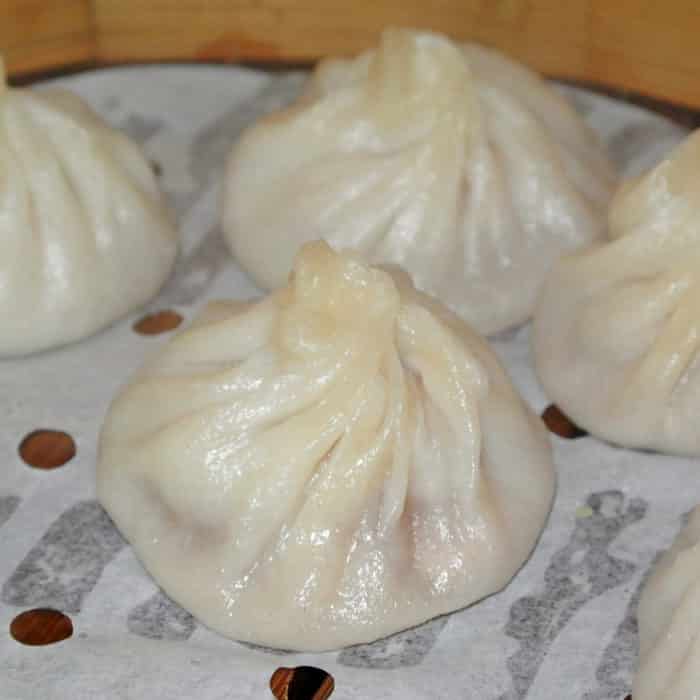 But, like I said, that’s just me being overly critical. Shanghai Bun is special to me because even in this rural, suburban part of NJ, it was able to open my eyes to a whole new world of creative culinary innovation. In an area so terribly devoid of ethnic, cheap eats, hole-in-the-walls, Shanghai Bun was there to inspire my insatiable curiosity and passion.

Now, I realize everything I’ve written about Shanghai Bun may not actually sound very positive, but I really do love the place. Nostalgia may skew my opinion just a bit, but for the price, the rarity of the cuisine for the area, and its importance to my growth as a food obsessive, it’ll forever remain near and dear to my heart. This isn’t the type of place I’d necessarily tell people to go out of their way for, but if I were in the area and in need of a good, cheap, comforting meal – it’s the place I’d go.

Got another great NJ hole-in-the-wall I should check out next time I’m back? Let me know in the comments below.