If I were to tell you about a trendy, hipstery pizza place in Texas serving authentic and innovative Neapolitan-style pies, what city do you think it would be in? I bet your first guess would be Austin, but I’m here to show you that this kind of awesomeness can also be found in the extremely underrated Dallas dining scene if you know where to look. The place I’m specifically talking about is located in the Deep Ellum neighborhood, which is basically the Williamsburg of Dallas. It has a thriving live music scene, loads of dive bars, and plenty of interesting casual dining options to explore.

Among the many great food options is Cane Rosso, a Neapolitan pizza shop generally regarded as serving the best pizza in Dallas. There are four locations in the Dallas area, and this Deep Ellum outpost is quite large and spacious as most things in Dallas (and the rest of Texas) tend to be. The decor balances a raw brick warehouse aesthetic with chandeliers, damask wallpaper, and edgy, stylish, fancy furniture pieces to create an appropriate high-end and low-key vibe. But, the iconic centerpiece of the room is certainly their big, red, dome-shaped pizza oven emblazoned with the restaurant’s name and logo in mosaic tiles. This is where the magic happens. This sit-down spot serves super-thin and reasonably priced pies that are cooked in that 900 degree wood-burning oven for 60 second at a time and nothing more. These carefully crafted pies get all the love they need in just 60 seconds flat.

Actually, we have our Dallas-based friends to thank for this meal. They were dead set on showcasing the Dallas dining scene with a Winston Wanders-worthy meal and decided that Cane Rosso would be a great lunch destination for the four of us. At Cane Rosso, they offer more than just pizza, but pizza was the only thing we were looking for. Quickly, we decided that three Neapolitan pies would be more than enough food for the four of us to split – the bigger question was which of their many delicious sounding pizzas should we choose?

They offer simple classics, but the menu is mostly dominated by pizza presets loaded with interesting combinations of high-end, locally-made, Italian-style meats and cheeses that range between $14 and $16 per 12 inch Neapolitan pie. Most of these fancy pies are named after real people and some, like the Motorino and Pauli Gee, are even named as respectful nods to New York’s greatest and most famous pizza makers. For this meal, our pizza partners left the first two pie selections in our hands. But, for the third, there was an absolutely non-negotiable order – and it wasn’t even listed on the menu. That’s right, a secret menu item! 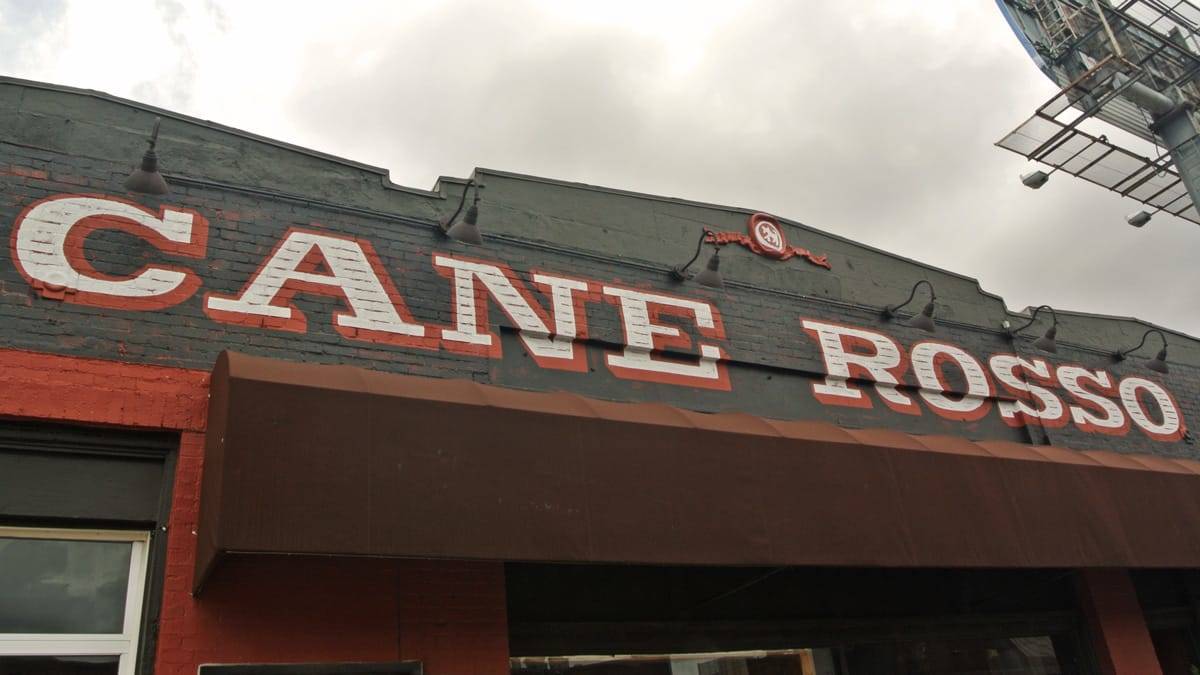 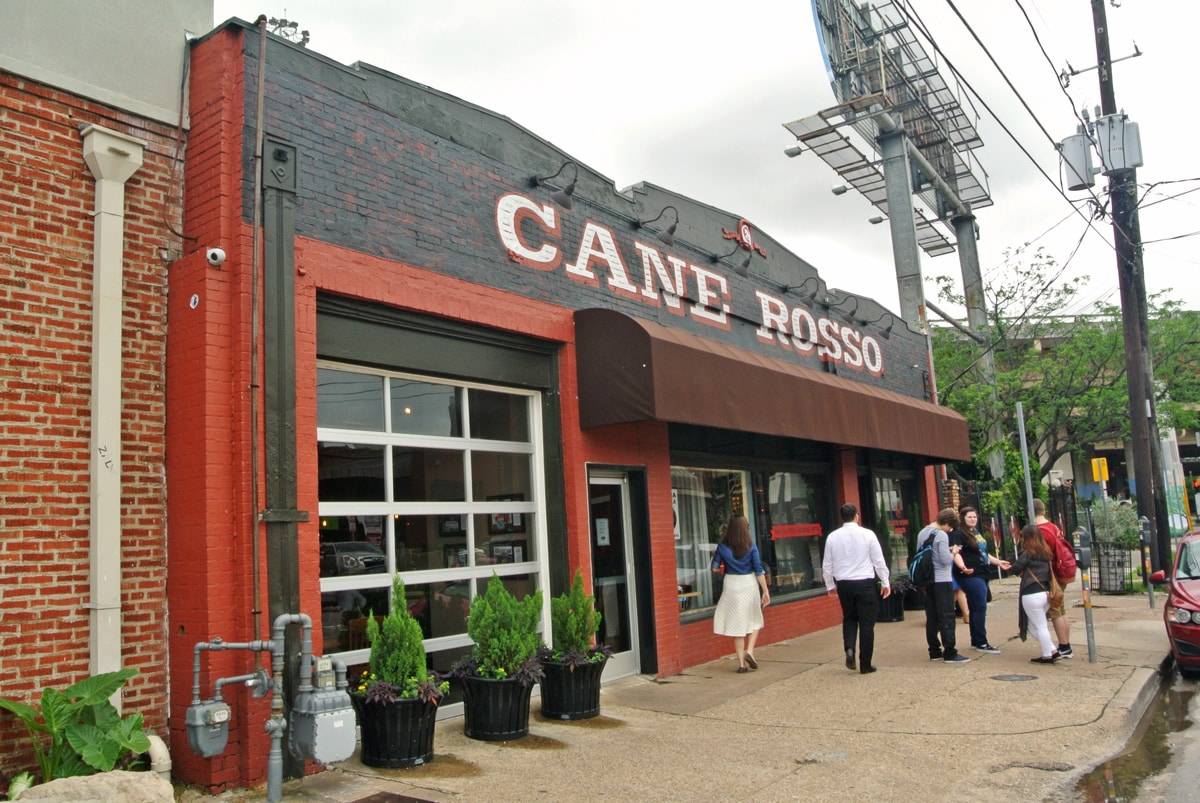 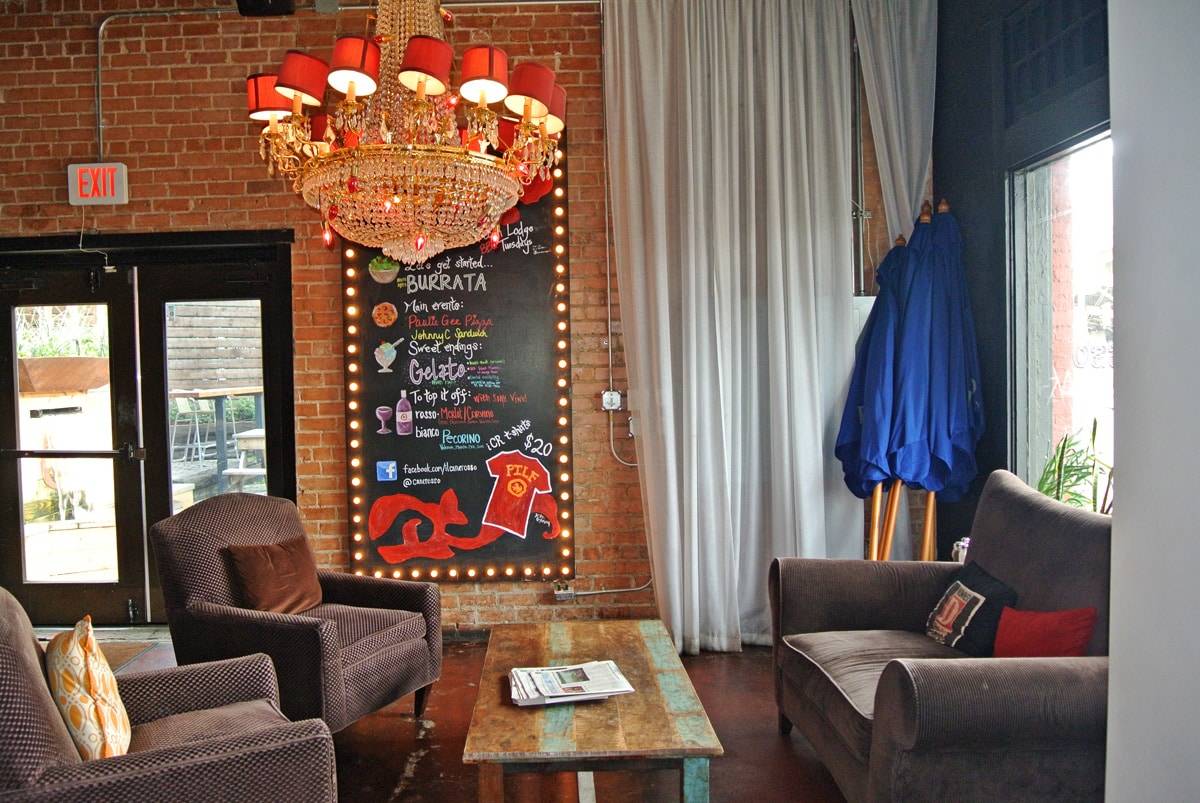 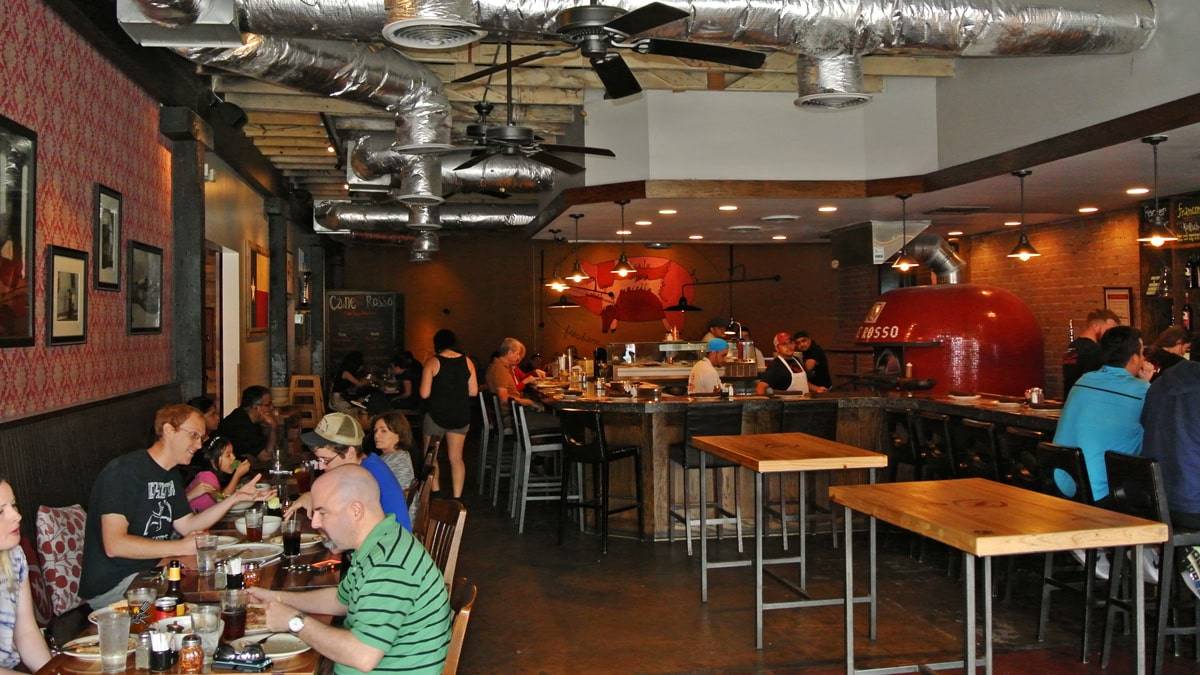 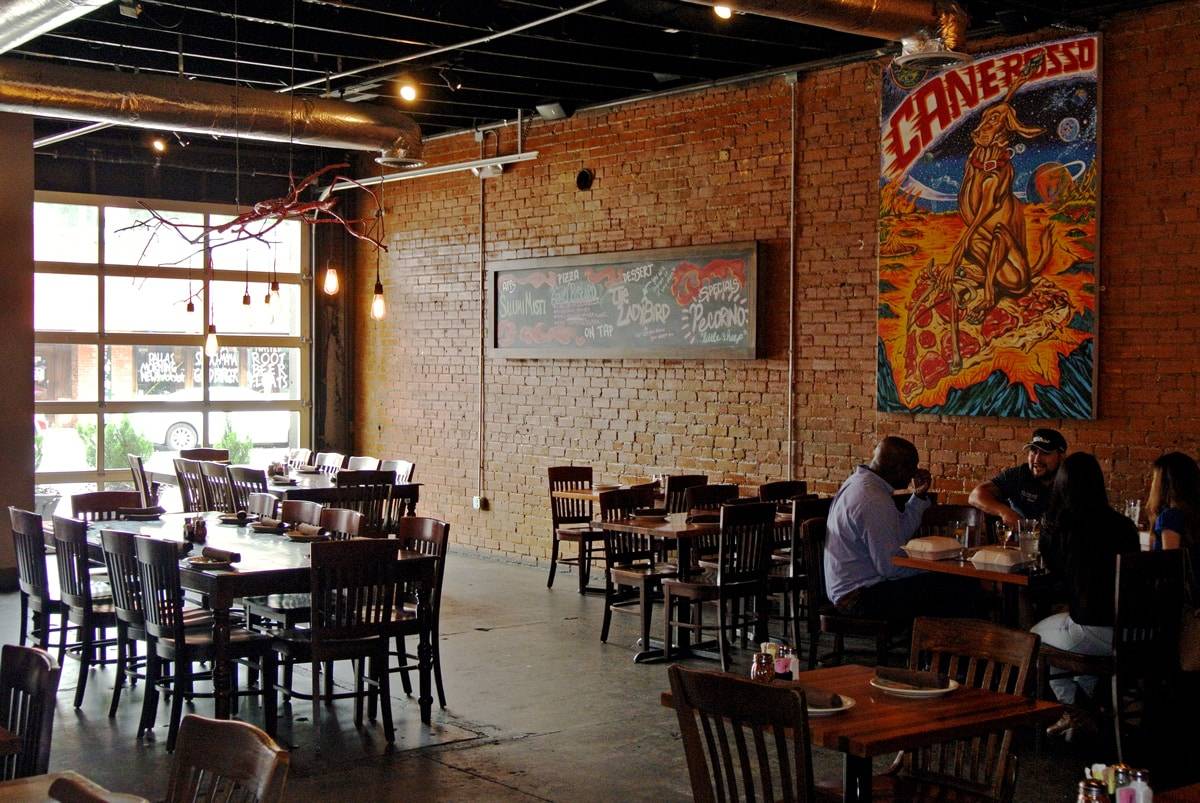 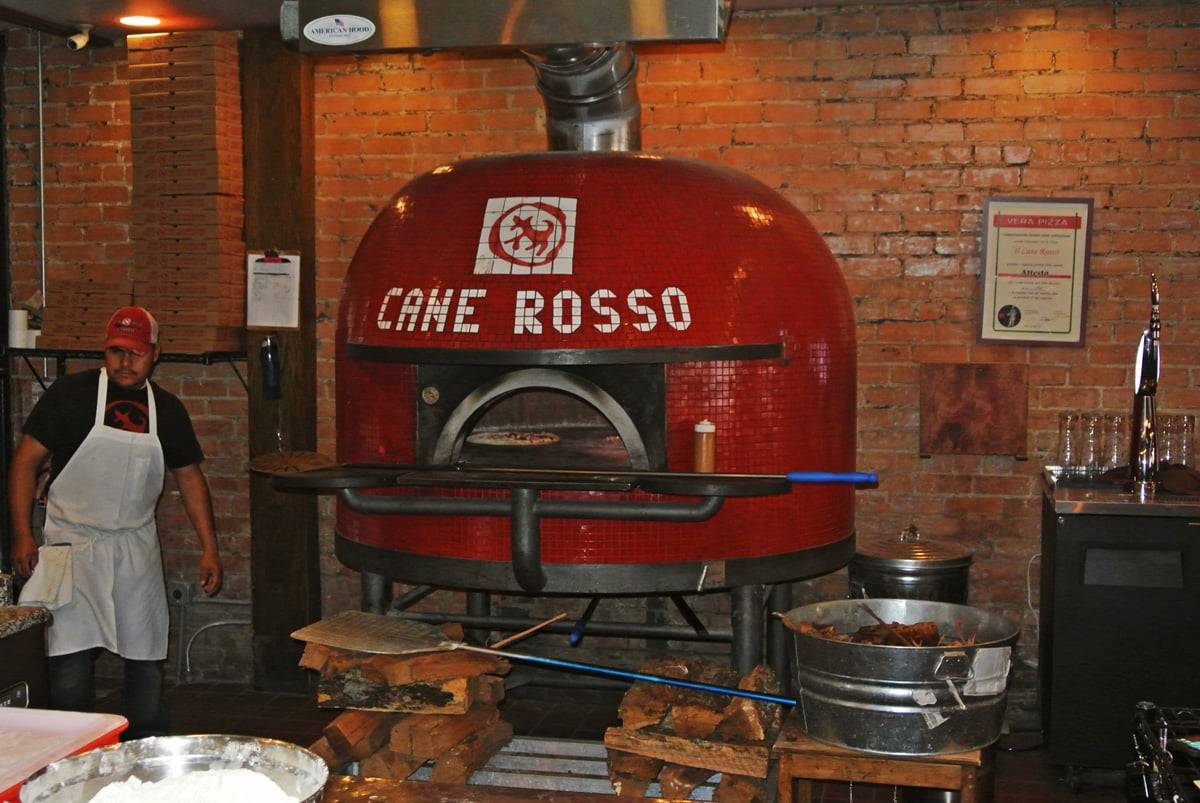 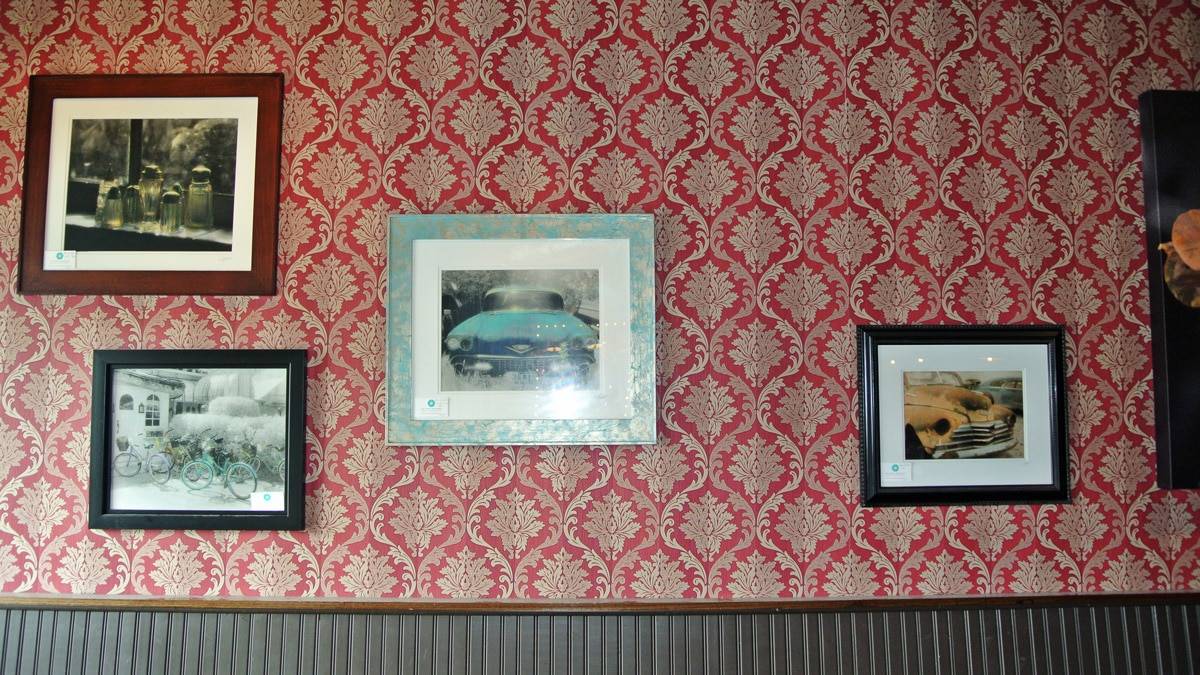 The first of our three pies was the Cacio e Pepe – a pizzafied riff on the extremely parmesan-loaded Roman pasta classic. It was made with imported Mozzarella di Bufala, parmigiano, extra virgin olive oil, basil, sea salt, and an utter torrent of fresh-ground black pepper.

I’m admittedly a total cheese fiend, so I loved these intensely cheese-forward slices. The richness of the sauceless pie was balanced well by the simple olive oil, basil, and sea salt adornments, but that aggressive punch of black pepper proved to be its signature. It was really quite good, though it felt just a touch pricey at $16 for the pie. 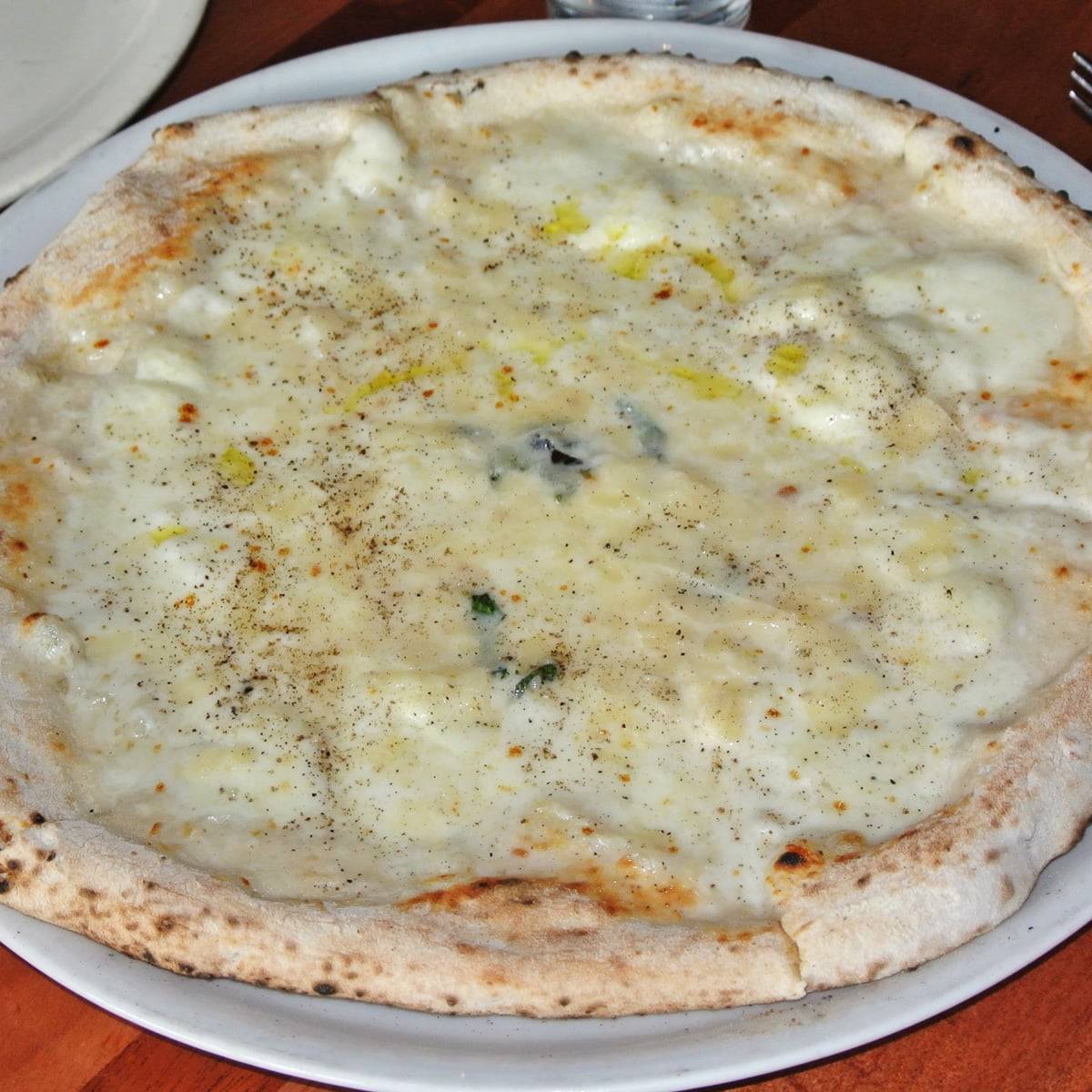 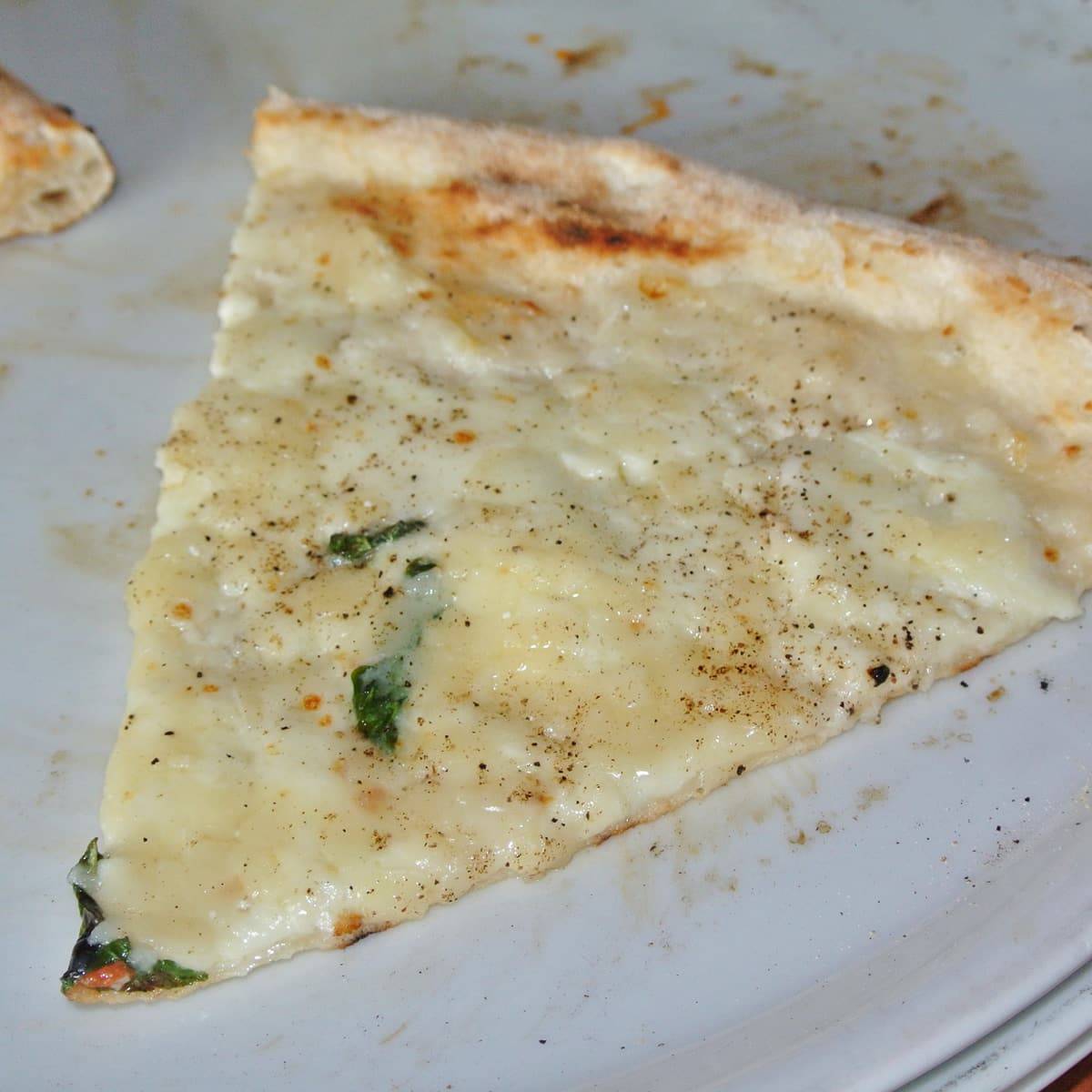 The second pie was called the OMB, which I assume was an abbreviation for Onion, Meatball, and possibly Bratwurst. It came fully loaded with crumbled meatballs, sliced locally-made sausage, a heap of caramelized onions (which we asked for on the side), kicking Calabrian chiles, hand-crushed San Marzano tomatoes, house-made mozzarella, and some basil.

The combination of toppings on this pie was much heftier and heartier than the previous pizza and in fact was more boldly flavored as well. The fennel-loaded sausage was truly outstanding and the caramelized onions were expertly roasted to a gloriously fully-rendered deep-brown hue. We all liked this pizza even better than the first and found it a better value for the $16 price tag. 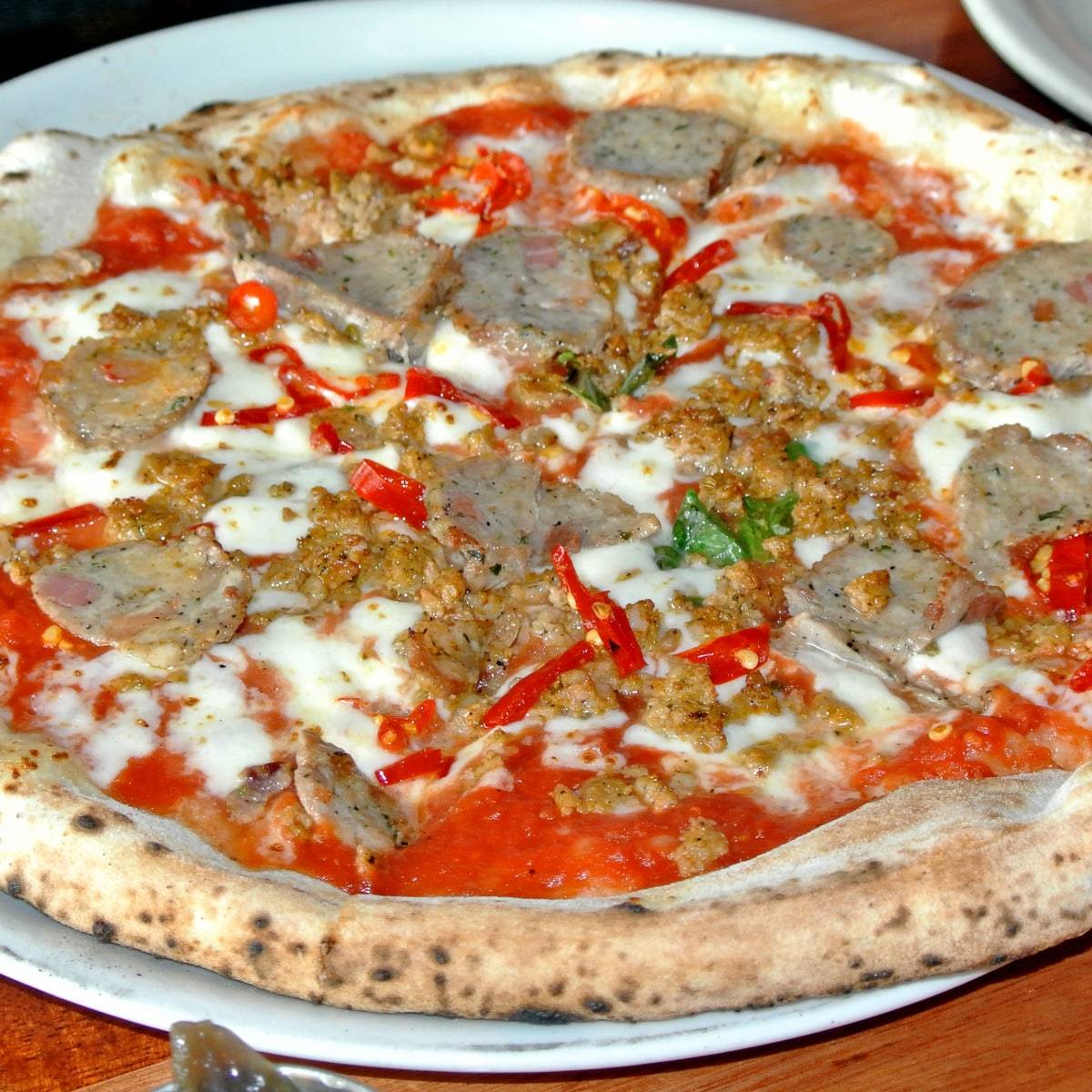 Finally, we arrived at that much-awaited off-menu secret pizza selection – a pie called the Honey Bastard. This is IT. This is the pizza you absolutely must order. It was insanely delicious and far and away the best of the three pizzas we shared.

Its secret recipe is not written anywhere, but I’m pretty sure this incognito pie was topped with sliced hot soppressata, habanero honey, and – get ready for it – spicy bacon marmalade. Spicy bacon marmalade is a magical, dark-red concoction made with fiery blend of whole chile pepper seeds embedded into a chunky, spreadable, bacon substance. That incredibly explosive sweet and savory combination was absolutely and utterly ridiculously delicious. I just couldn’t get enough of that stuff and am still drooling thinking about it to this day. 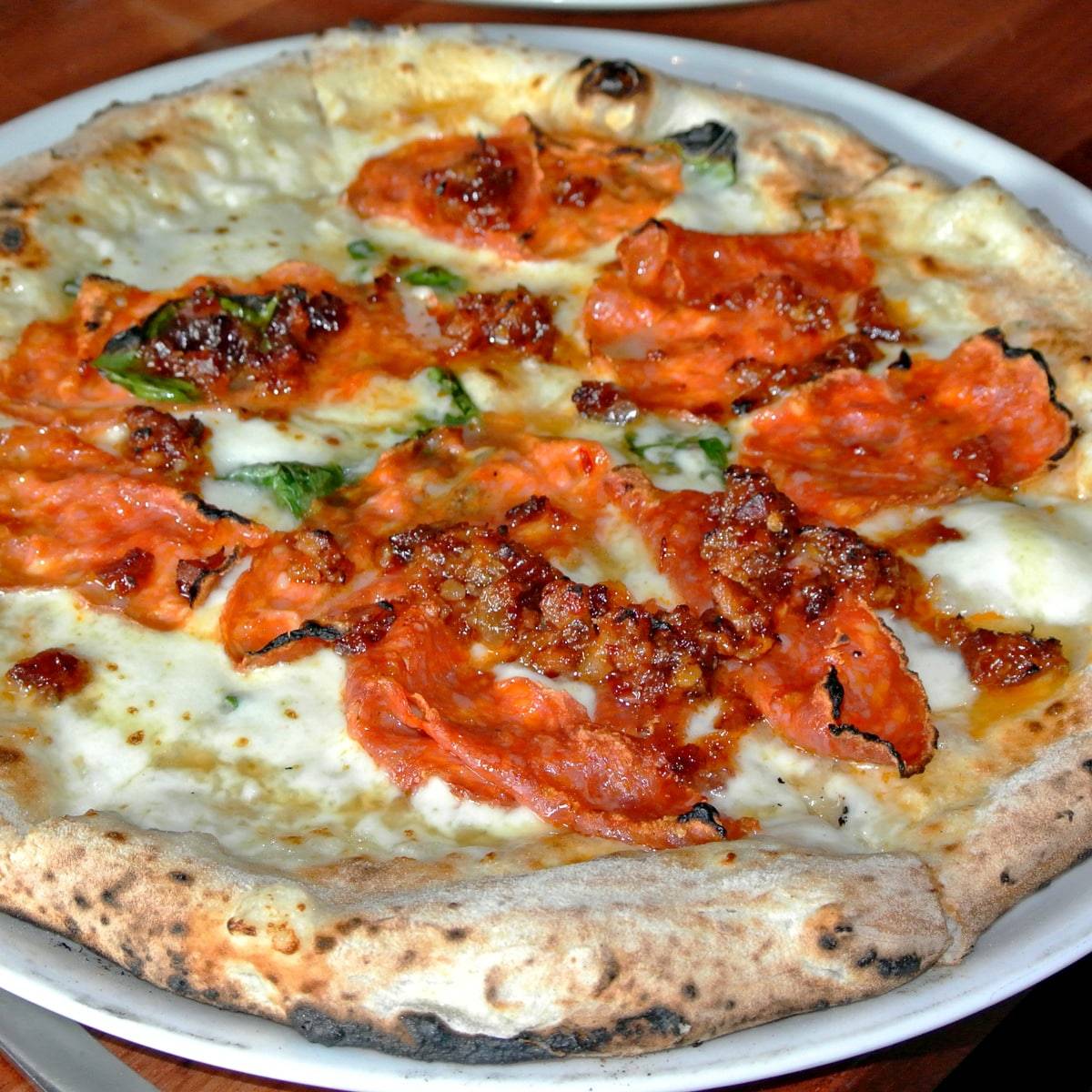 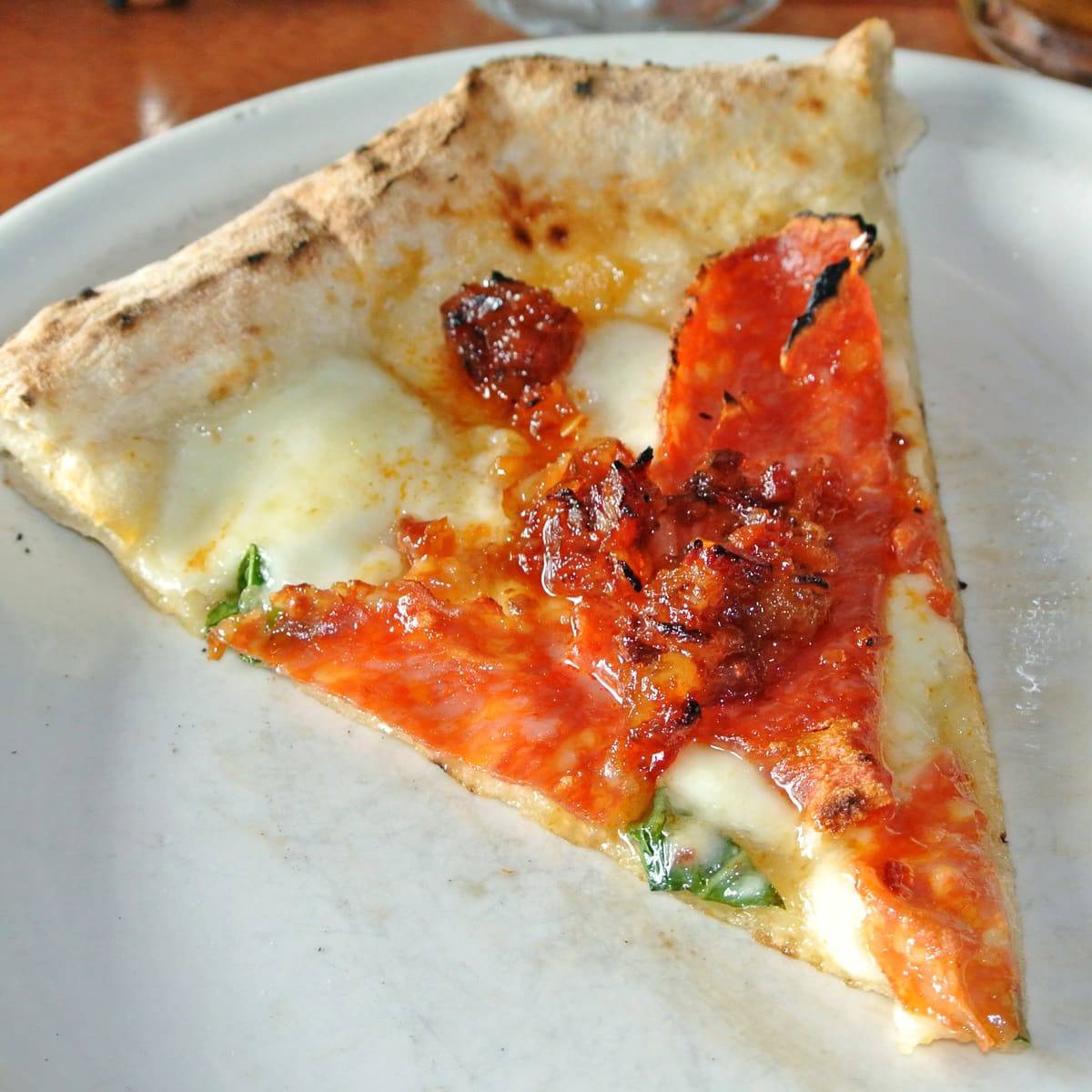 So, while I realize that Dallas isn’t necessarily held in the highest regard in culinary world, I’ve found that there are definitely good reasons that they should be able shake that bad rap. There’s some really interesting things happening around this underrated city, especially in the hipster-heavy Deep Ellum neighborhood. I didn’t expected it, but Cane Rosso took the extremely challenging task of executing perfect Neapolitan pies, knocked it out of the park, and even innovated spectacularly on the traditional formula. Well played Cane Rosso, well played.

Got another great eatery in Dallas to check out? Let me know in the comments below.