I don’t know if you’ve noticed, but I also don’t know how you could have possibly missed it. Over the summer of 2015, fried chicken was quite the hot trend, completely dominating all mainstream food media outlets with hyped up content. With big name heavy-hitters like David Chang opening his much-hyped Fuku and Danny Meyers launching a fried chicken sandwich at his much-loved burger shop Shake Shack, seemingly everyone was scrambling to get into the fried chicken game. Every place was busy concocting their own signature breading type, fry-style, and of course secret spice blend.

But, there’s one fried chicken variant that I had this year that was invented long before all of this summer’s madness and I still can’t seem to get it out of my head. This insane fried chicken creation has literally crept into my dreams on more than one occasion like Freddy Krueger, taunting and torturing me to return from within. Unfortunately, this unconscious itch can only be scratched in one place — and this unusually creative shop called Red’s Chinese is located in a way-off-the-beaten path New Orleans neighborhood called Bywater. If you’re in NOLA without a car, Red’s Chinese is not the easiest to access, but if you’ve got one, it’s an absolute cannot-miss. Actually, you better book your flights to NOLA now, you’re gonna want to experience this one for yourself.

Red’s Chinese is the genius brainchild of Tobias Womack and Amy Mosberger. Womack is a former San Franciscan and while living there, he grew obsessed with the then under-the-radar and now extremely acclaimed, off-the-wall, hipster, San Fran-Chinese trailblazer Mission Chinese. He later became close friends with Mission Chinese’s visionary head chef and owner Danny Bowien and subsequently ended up working as a chef at Mission Chinese’s New York outpost until an arguement over Szechuan peppercorns erupted between the two and led Womack to work elsewhere. After a stint in at Brooklyn’s Martha where he connected with Amy Mosberger, the two ultimately decided to vacate the high rents of NYC to open up their own place together in NOLA.

Much like Mission Chinese, which has locations in culturally vibrant neighborhoods like San Francisco’s Mission District and New York’s Lower East Side, Red’s Chinese has selected an equally as hipster-friendly location in NOLA called Bywater. On second thought, maybe hipster-friendly is the wrong term. Bywater actually has a long-standing reputation for vehemently resisting the inevitable oncoming gentrification and has a history of going out of its way to make new, young, outsiders feel unwelcome. Well, Bywater, it’s coming and Red’s Chinese is one of the flag-bearers of rapid gentrification nearing – not that that’s a bad thing.

But, that’s enough about the history and background of Red’s Chinese, the Bywater neighborhood, and the fried chicken craze of 2015. Let’s talk about the food! 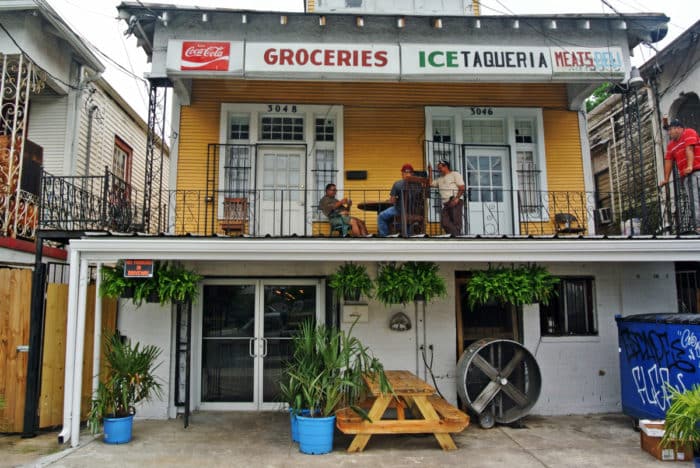 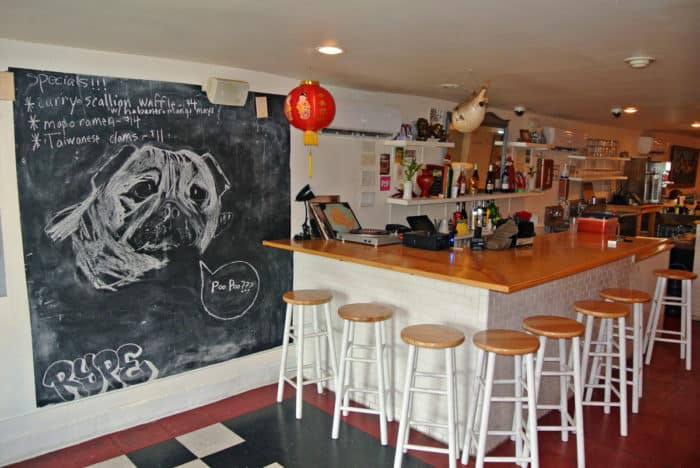 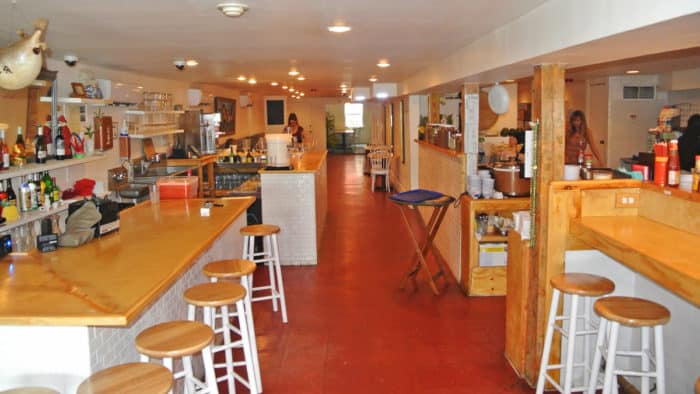 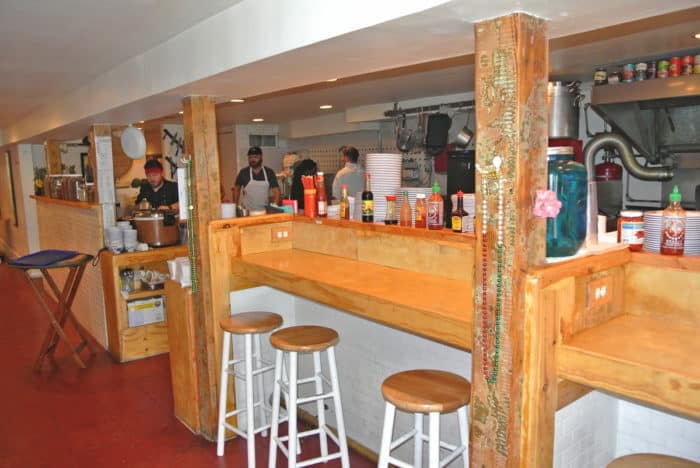 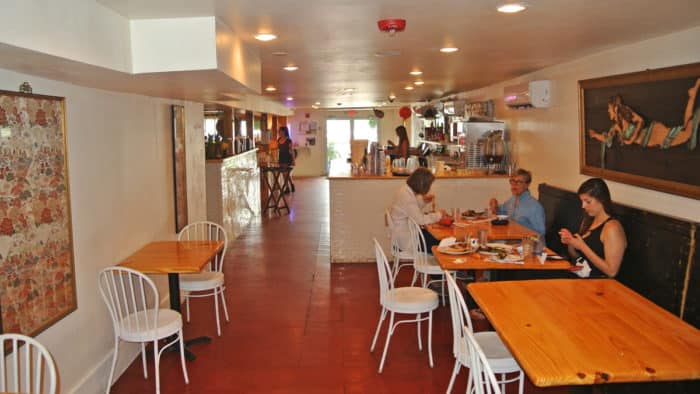 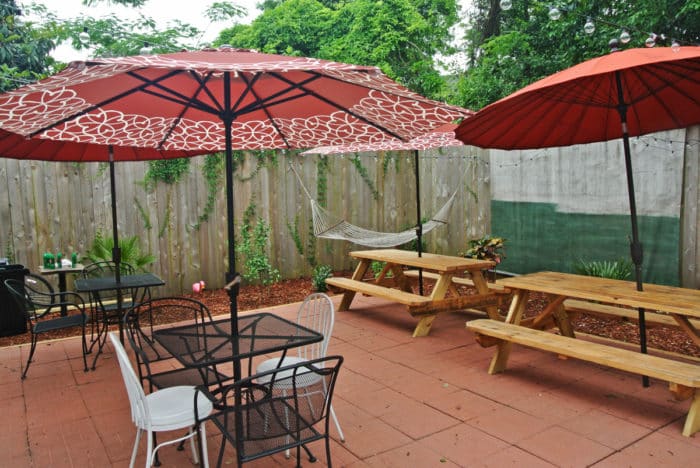 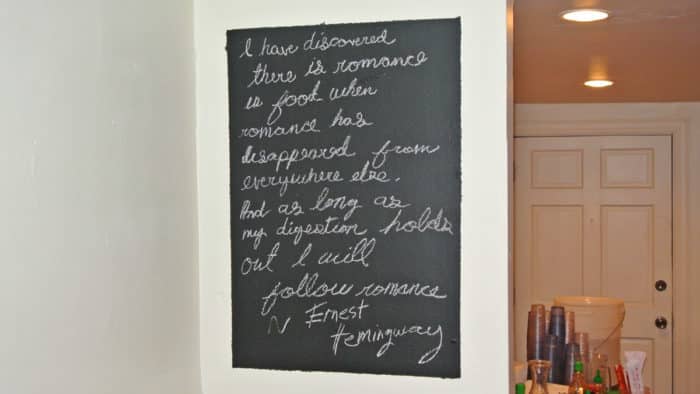 Womack’s menu does actually offer a hell of a lot more than just that fried chicken dish that’s been haunting me ever since. But, I’d be lying if I didn’t acknowledge that it’s become their most famous and popular item in their short year and a half existence. The frequently changing menu features an ever-evolving, innovative, bold, flavorful, potent, and often spicy cross-over cuisine that embraces traditional Chinese flavors while pushing their limits and bending them until the snap.

Womack’s experience at Mission Chinese, with explosive fusion dishes like Thrice Cooked Bacon and Kung Pao Pastrami, clearly left an indelible mark on Womack’s style and it shows on the menu at Red’s. To anyone that’s ever dined at Mission Chinese, the influence of Danny Bowien’s experimental kitchen will feel familiar, but things get particularly interesting at this spin-off when Womack seamlessly integrates classic Creole and Cajun techniques and flavors into the mix. 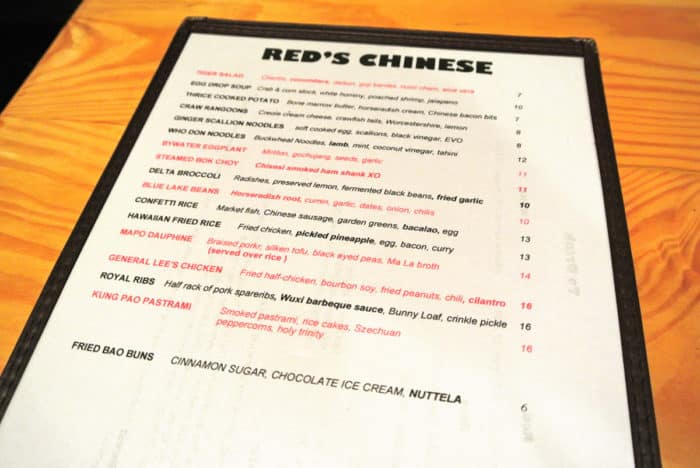 Given that my visit was occurring over a weekend, I was on vacation, and I was in NOLA, brunch cocktails seemed like an extremely fitting and completely inevitable decision. I opted for something called a Red Rita made with Espolon silver tequila, lime, cilantro, and a funky, red, fermented condiment called gochujang commonly used in Korean cooking.

First reaction: Damn! that’s some bracing heat! That gochujang was really vibrant and definitely dominated the drink, but there was also a strong citrus element that provided some balance and an additional counter-balance came in the form of a well-salted rim. This inventive cocktail had an extremely complex combination of funky flavors — it was also so spicy and so good. I’m all in on this one. 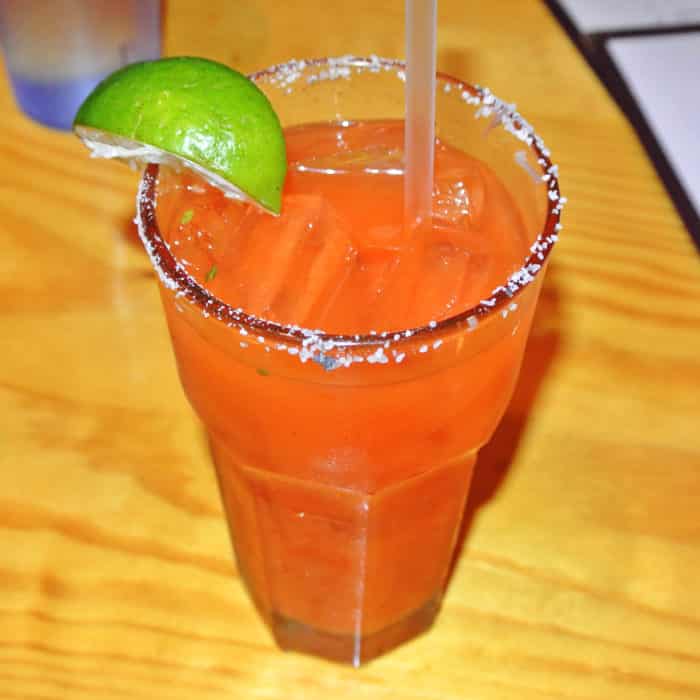 The other cocktail we tried was called Gin & Cukes. This was a far mellower drink, but not without its innovations and complexities. It was incredibly well-balanced and made for a very smooth drinking experience. However, the standard summery, refreshing cucumber and Hendrick’s gin combo was twisted, transformed, and perverted by adding a spicy and vinegary habanero shrub and aggressively herbal punch of fresh ginger. This added such an amazing boldness and advanced flavor evolution to the ordinarily tame and balanced classic cocktail that I often enjoy. No lie, I could drink these all day. 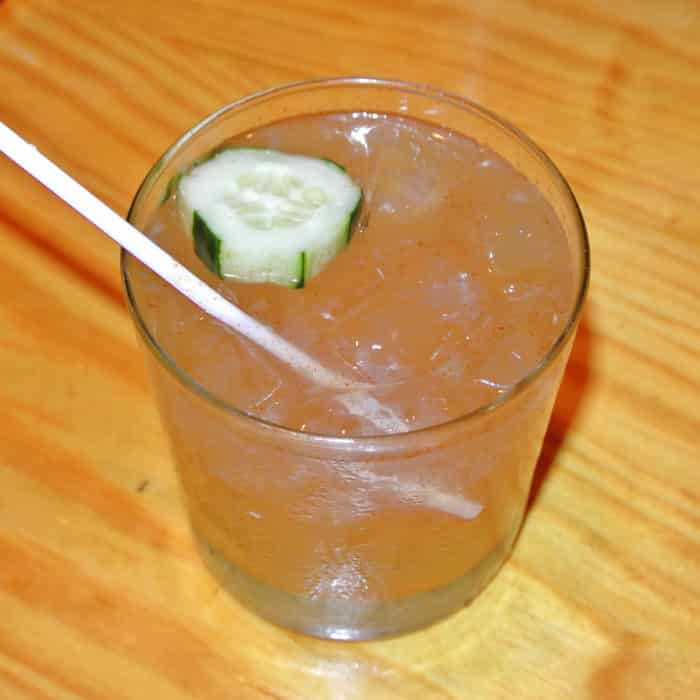 And although I had actually come to Red’s Chinese on this visit only with intentions of trying that one famous dish, I couldn’t in good conscience come all the way to New Orleans’ Bywater neighborhood and just eat one thing. After looking over the entire extensively interesting menu, we decided that their Thrice Cooked Potato — topped with a decadent combination of bone marrow, Chinese bacon, scallions, and horseradish cream — had to happen as a starter.

Well, holy-freaking-moly. My jaw absolutely dropped to the floor when that platter was plopped in front of us. It was magnificent. Just look at it. Make no mistake about it, that was an entire potato and a half, absolutely smothered with all the good stuff.

I can’t say I’ve had many exemplary baked potatoes in the past, but this out-of-control, over-the-top variation was undeniably the best I’ve ever had. The crispy texture achieved through triple-frying was extraordinary, but that ridiculously meaty, creamy, rich, and flavorful bone marrow and Chinese bacon topping totally that made the dish so memorable. I know it may be hard to believe, but even beneath that mountain of meaty toppings, there was still a surprising lightness to the whipped topping. Miraculously, it somehow balanced the mound of dense, hot, crispy starchy, potato and elevated it to a higher level of deliciousness. This dish was truly a revelation. 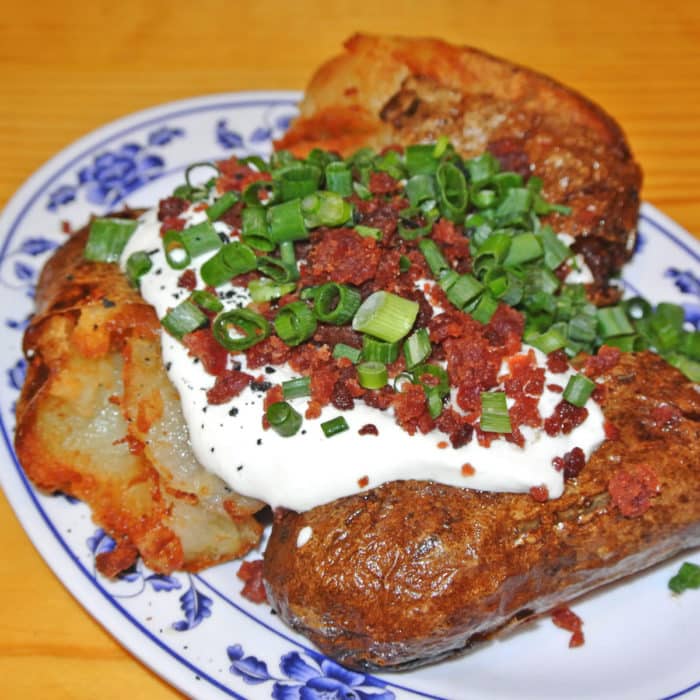 But, here’s what I think you’ve been waiting for — that famed General Lee’s Chicken — the fried chicken that’s clung to my brain like a damned parasite. If you’ve heard about this dish, you heard right — if you haven’t, I’d like to introduce your new favorite thing in the world.

The platter consisted of an entire half-chicken that had been breaded and deep fried in a traditional Southern style. This perfectly executed fried chicken was then smothered in a ridiculous sticky, sweet, spicy, herbal Chinese concoction reminiscent of General Tso’s sauce, but brilliantly evolved and transformed into a new, complex, and elevated form. This was no gloopy, leaden, ball of boneless mystery meat. This was perfectly fried chicken – crispy, dry, and studded with fried peanuts — amply sauced with a glorious bourbon-laced soy glaze.

The freshly-fried meat was super-hot inside, but I honestly couldn’t hold myself back and literally scalded the inside of my mouth. It was so worth it. Every pieced involved a strong peanut smell that wafted into my nostrils along with an aggressive tingly sensation that numbed the inside of my mouth caused by the heavy-handed Szechuan peppercorn usage. They must know how insanely irresistible that sauce is — they were kind enough to automatically provide a big bowl of long grain white rice – the perfect vessel to soak up the rest of that unbelievably delicious sauce, fried peanuts, and little crispy chicken bits that settled at the bottom of the gargantuan plate. This fried chicken was utterly re-goddamn-diculous.

So, between the two creative and exemplary dishes and two cocktails, we both left excessively full and so extremely satisfied. As the meal concluded, those extraordinarily vibrant and aggressive flavors resonated through my bones and literally left my body jittering, shaking, and humming uncontrollably with excitement. This is the kind of outrageously delicious menu that’ll bring you to the edge, push you over it, then leave you begging for more. In a single meal, Red’s Chinese became one of my favorite eateries in the country – easily.

I truly do believe that Red’s Chinese serves the kind of food that can unify and bring people of all type together, even the highly insular Bywater community. It’s that good. All of the prices are very reasonable, the portions are utterly massive, and all of the food and drink were outstanding and unbelievably innovative. Bywater, please open your minds and accept Red’s Chinese into your hearts – that’s all I ask.

Got another out of control, innovative eatery that I should check out? Let me know in the comments below.