It’s feeling like summer, so let’s talk about summery things. It probably comes as no surprise to anyone but, I’ll say it anyway – New Orleans gets freaking hot in the summer. And when the people of NOLA find themselves melting under the oppressive sun, they rely on a steady intake of freezing cold shaved ice treats known in this town as Snowballs. You’re probably familiar with this sort of summery snack and you also probably know it by another region-specific name – Italian Ice, Water Ice, Shaved Ice, a Snocone, or any other myriad of alternatives. But in NOLA, it’s a Snoball. And there’s one place that become the most famous for them and draws the biggest crowds of all called Plum St. Snowballs.

When we visited, it was only late April, so NOLA hadn’t even reached the peak of dead summer heat yet. But, it was still quite hot – not disgustingly hot, but people were definitely already lining up to experience this classic, cooling refreshment. Way off the beaten path in relatively run down part of the Uptown neighborhood, far away from any other eateries (or businesses for that matter) – that’s where you’ll find this lone Snoball-slinging structure. The giant, yellow, barn-like building illuminated the rough and tumble territory like a lighthouse beacon piercing through a thick ocean fog. Alas, there was no fog to shine through – just NOLA’s brutally dense humidity. Despite the heat, or perhaps because of it, this place remains a constant attraction for tourists and locals alike who come from all over the city so these Snoballs can combat the heat.

This is a dish of the people. It’s the kind of summertime treat that is enjoyed by everyone and anyone. It’s quick, it’s cheap, it’s got a functional purpose, and it’s got an undeniable nostalgic quality that unwaveringly transports people right back to their childhoods. There’s nothing fancy about the place – in fact, I’d say that it falls about as far away as possible on the cold treat spectrum from the super-fancy, high-tech liquid nitrogen ice cream shop I frequent in SF. But, these simple snoballs have their rightful place in the world and serve their purpose well too. 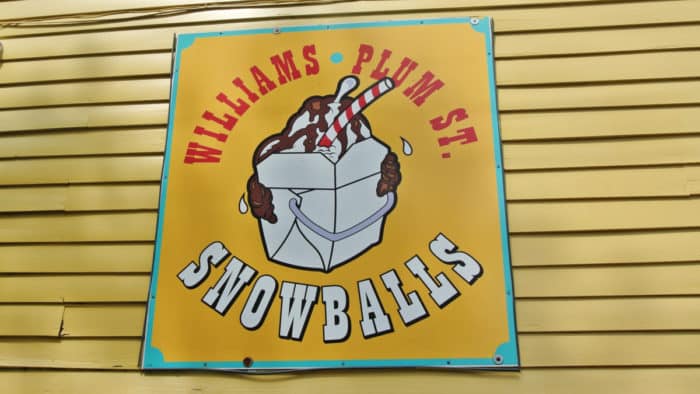 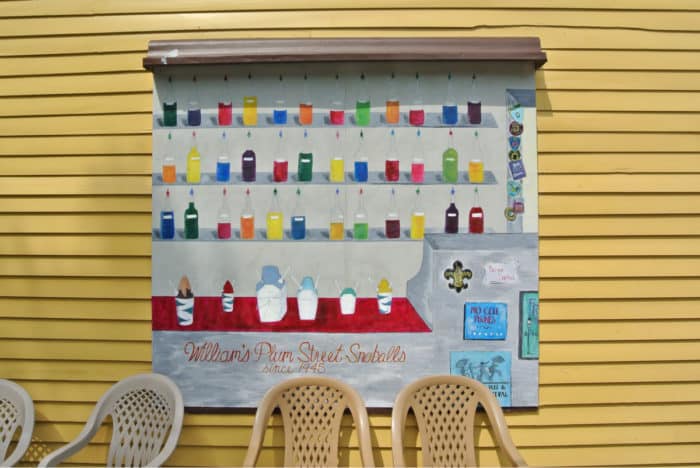 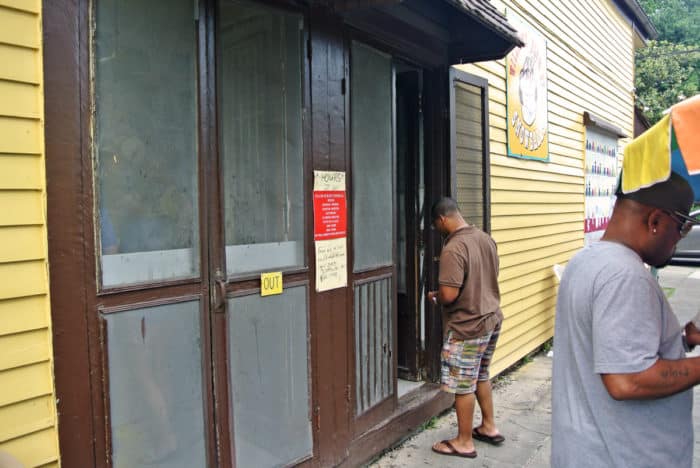 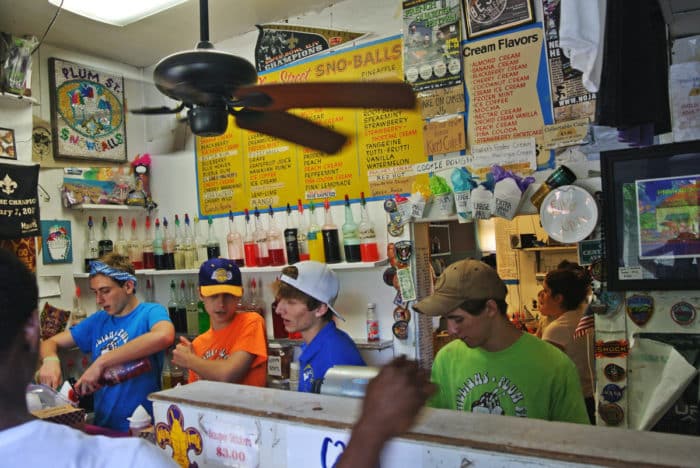 So, we pulled up to the place and found some street parking nearby. Then, we hopped in line and waited for out turn to enter the tiny, crowded, bustling, hole-in-the-wall to place our order. It’s a relatively simple system – but there are a ton of choices. First you need to select your size, which ranges from a Kid’s Cup at the smallest to a variety of mid-sized Chinese take-out boxes, all the way up to a mammoth plastic tub big enough to feed an entire army.

Once you’ve decided on how much indulgence you want to consume, you’ll need to pick your flavor. There’s really two paths you can take here and I went for one of the sweet fruit varieties whereas Amy opted for one of their cream styles.

I ended up with a Kid’s Cup of Green Apple for only a buck or two. That Kid’s Cup was no joke. It was plenty big for me, though I was sad I didn’t get to eat my Snoball out of one of those awesome Chinese takeout pails. In any case, it was probably for the best that I didn’t order a larger size. My Dixie cup was filled with an pile of shaved ice entirely stained a deep, dark, and bright green hue by the Green Apple flavor. It was quite sweet and definitely artificial tasting – exactly how I would imagine a cold, liquified sour gummy apple ring would taste blended up. It was actually pretty darn tasty and it was definitely refreshing, especially for something so obviously artificial. 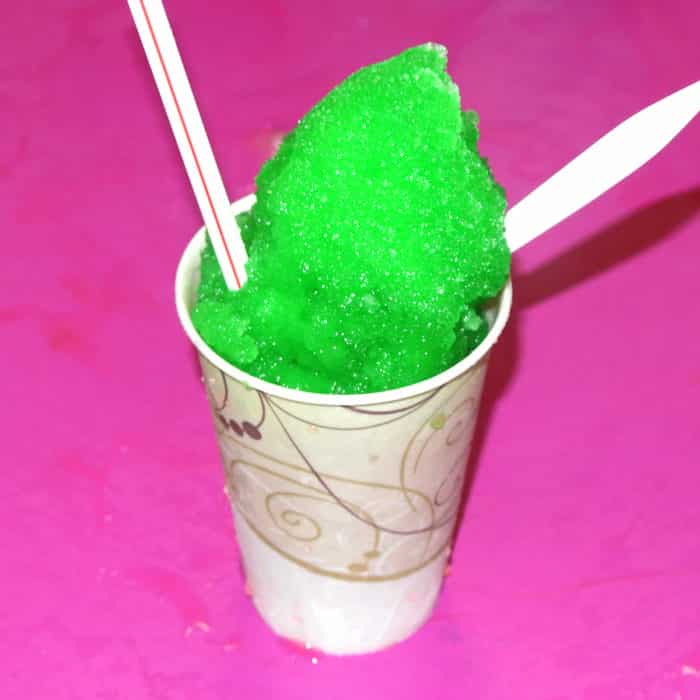 Amy, on the other hand, ordered a Kid’s Cup of Bananas Foster Cream flavored shaved ice. It was a bright yellow tone and was also pretty artificial tasting, but much less so than my Green Apple was. True to the name, this one had a much milkier creamy richness that worked well with the subtle banana overtones. Of the two flavors, we definitely preferred this one.

If you’re feeling especially crazy, ask them to drizzle condensed milk over top of your snoball for an extra excessive boost. We knew that the topping would have made this cream style Snoball taste even better (and probably less artificial), but we decided to opt out of that additional caloric consumption this time around.

So, when you’re in New Orleans and your feeling the city’s heat, do as the locals do and head to Plum St. to cool off with one of their famous snoballs. It’s a really simple, no-frills, summery treat that’s made with nothing more than shaved ice and neon-colored, flavored syrup, but sometimes that’s exactly what’s gonna hit the spot. Just make sure you eat it fast enough so it doesn’t have the chance to melt into a pool of multi-colored ooze – or don’t and let your inner child run wild.

Where do you go to cool off from the summer heat? Let me know in the comments below.