About an hour north of Dallas, you’ll find my fiancé Amy’s small hometown of Denison. It’s located right on the Oklahoma border near Lake Texoma. The location is so far north that anyone not already driving up to the indian casinos in Oklahoma would have no reason to pass through. But, if you end up in the area, its worth a stop. Many local Denison residents actually do go fishing for catfish in Lake Texoma, but if you’re like me and don’t actually want to go through the effort of catching the fish for yourself, there is truly no better place to get some fried up fresh than at Huck’s.

Though it should seem obvious that Huck’s would source their catfish from local Lake Texoma, that’s not actually the case. They ship in farm-raised fish, I assume for quality control and fishing ethics purposes. Their cooking methods, they claim, are representative of Mississippi delta style frying and everything is always made to order. It’s a smoke-free restaurant, which is a dining factor I don’t usually have to take into consideration outside of Texas, but something I appreciate very much there.

The place is almost always bustling – filled mostly with large families of locals. It’s also the kind of place where nearly every person orders their own monstrous gallon-sized cup of sweet tea to wash down their deep-fried meals. And inside, there’s often loud country music playing overhead and a boatload of Texas-centric fishing-themed decor covering nearly every wall. The surfaces of the tables curiously are permanently covered with advertisements from local businesses including a rather gross photo of what I think was open-heart surgery at my seat. This is a place made for the locals. 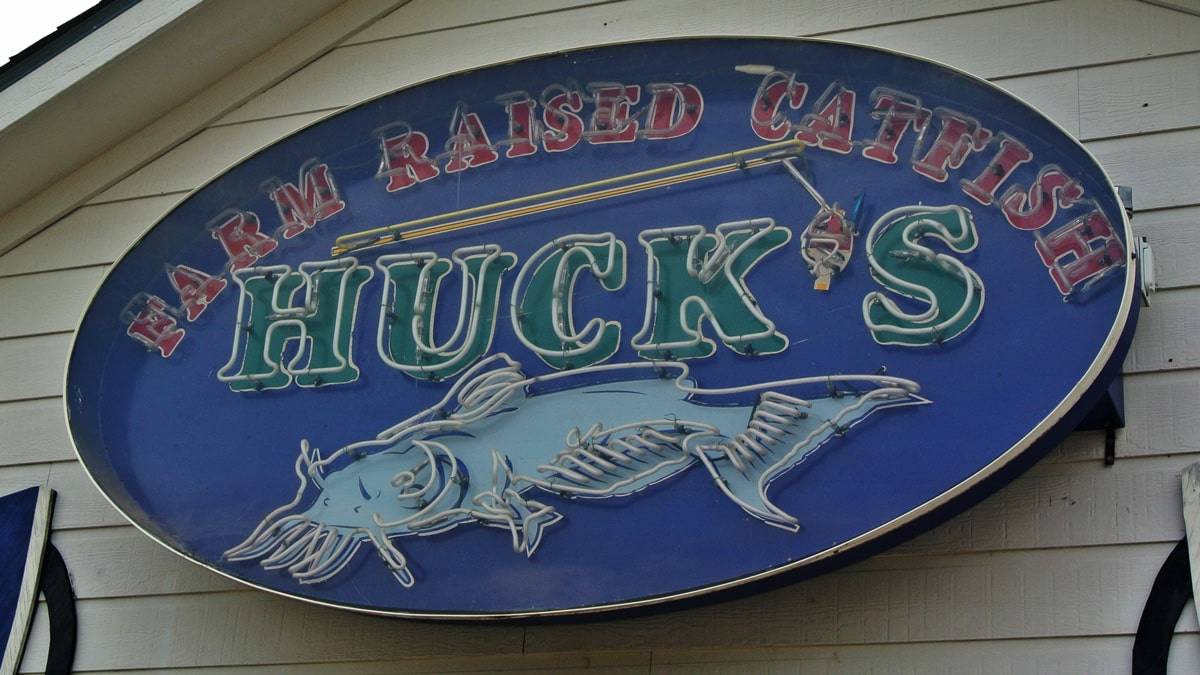 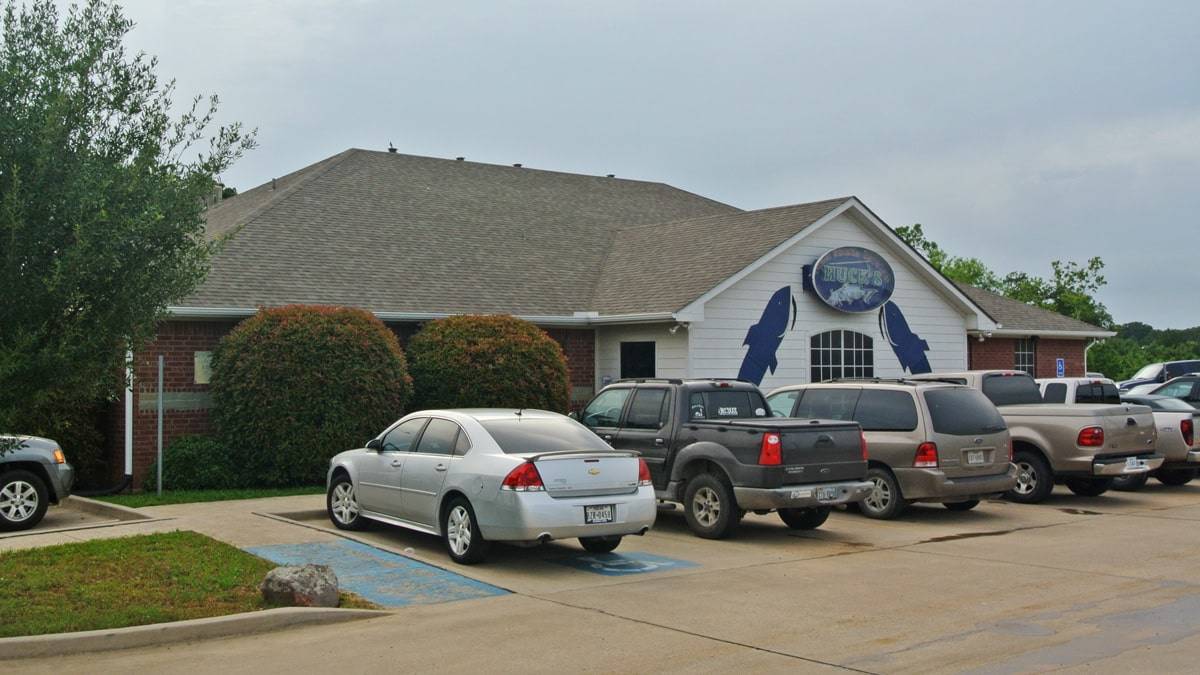 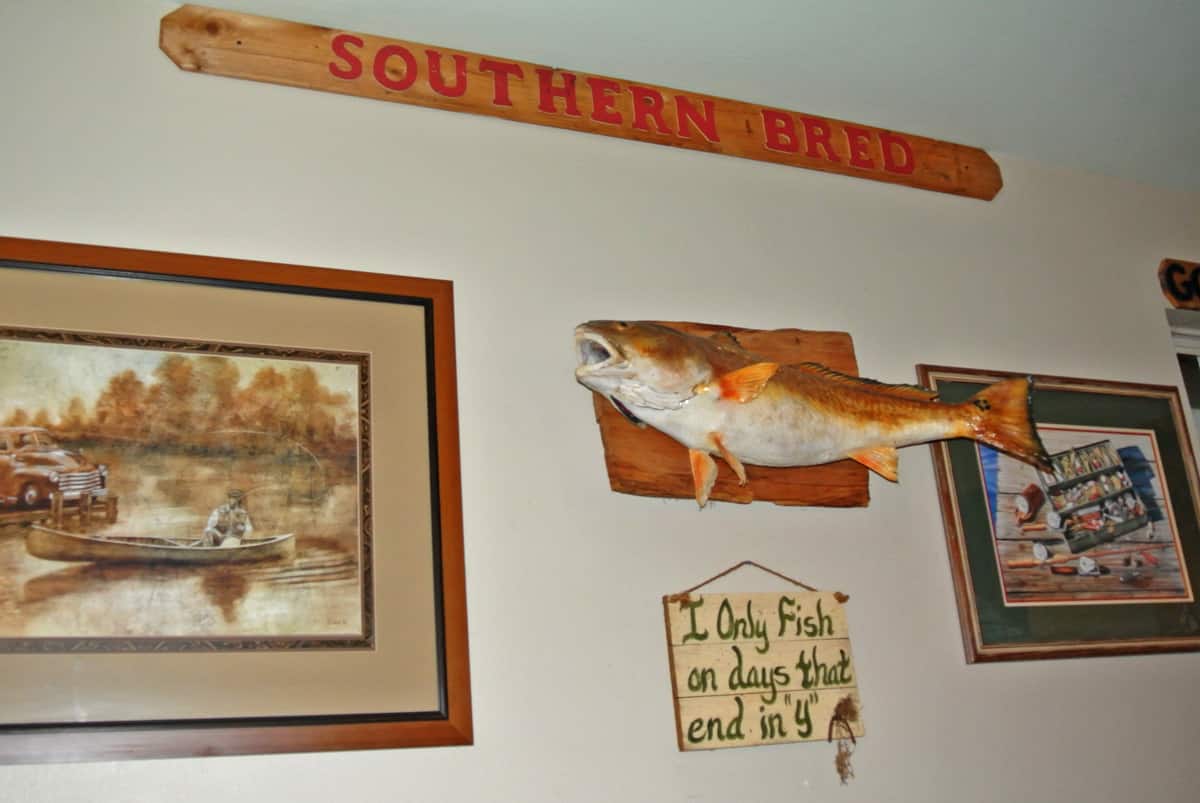 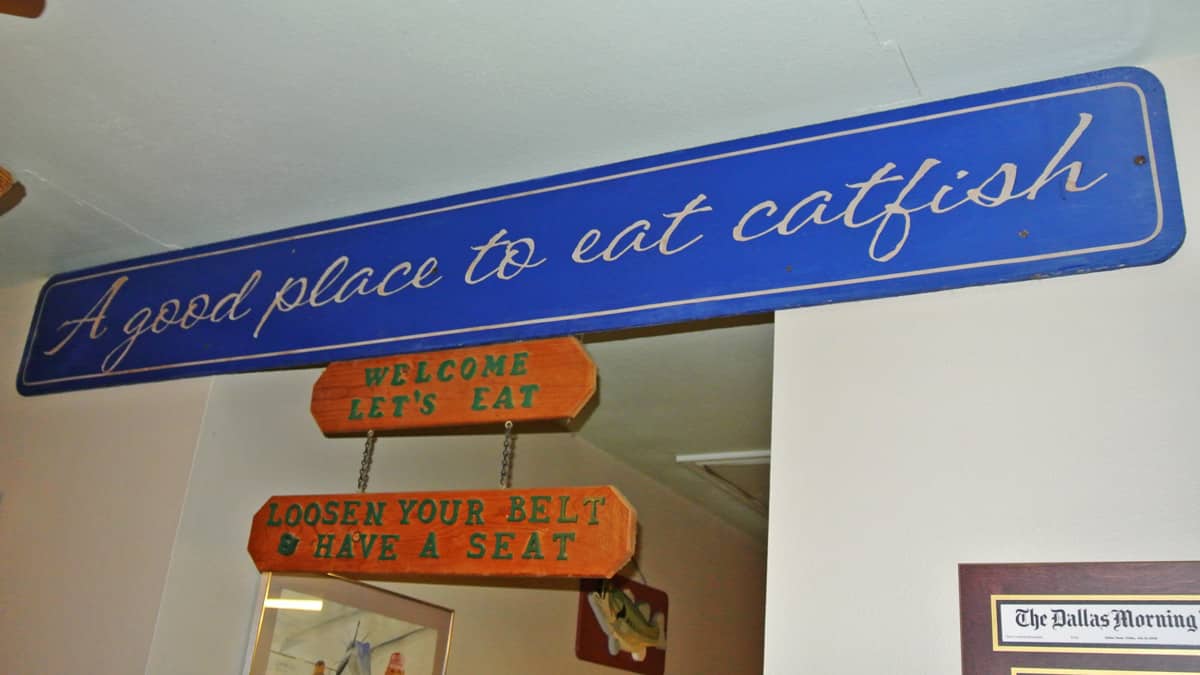 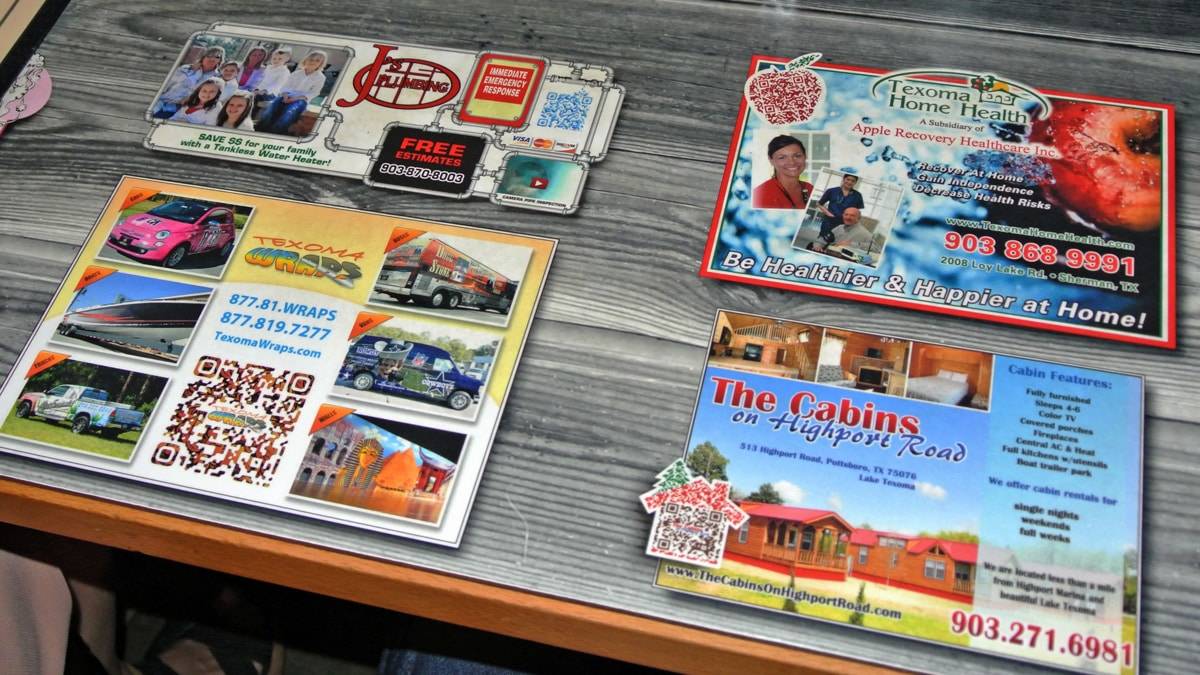 But, let’s talk about the food. You’ll definitely want to start off with an order of Hush Puppies for the table. These ping pong ball-sized cornmeal orbs are always freshly deep-fried to order and have a surprising lightness despite their impressively crispy browned exterior crusts. The balls had a hefty, soft, dense corn kernel-studded interior too that contrasted nicely with the crisp outer surface. Just make sure you’re aware that these fritter bites won’t be complete without a generous slathering of soft, melty butter.

The menu actually has many options to choose from, but if it’s your first time at Huck’s, you absolutely must order the Fried Catfish. A meal is priced by number of filets (a single filet makes a 1/4 order for $5.95, two is a 1/2 order for $8.95, three is a 3/4 order for $12.95, and four makes a full order for $16.95). In general, I’ve found that a half order is more than enough food for my massive appetite and a 1/4 order can suffice for a lighter meal. A full 4-filet order would be absolutely absurd for a single person in a sitting – I don’t think I’ve ever seen anyone attempt it. In any case, all meals come with farm-raised, hand-breaded fish along with a choice of two veggie sides.

These catfish filets never seize to amaze me. They’re always so incredibly flaky, moist, and tender inside and have a gloriously crisp, light, dry-fried, tan-colored cornmeal crust outside. They come seasoned very simply to highlight the fish, but I often find that the filets taste even better with a few shakes of Louisiana hot sauce and a drink in some creamy tartar sauce. Two fried filets and two sides always leave me beyond stuffed. 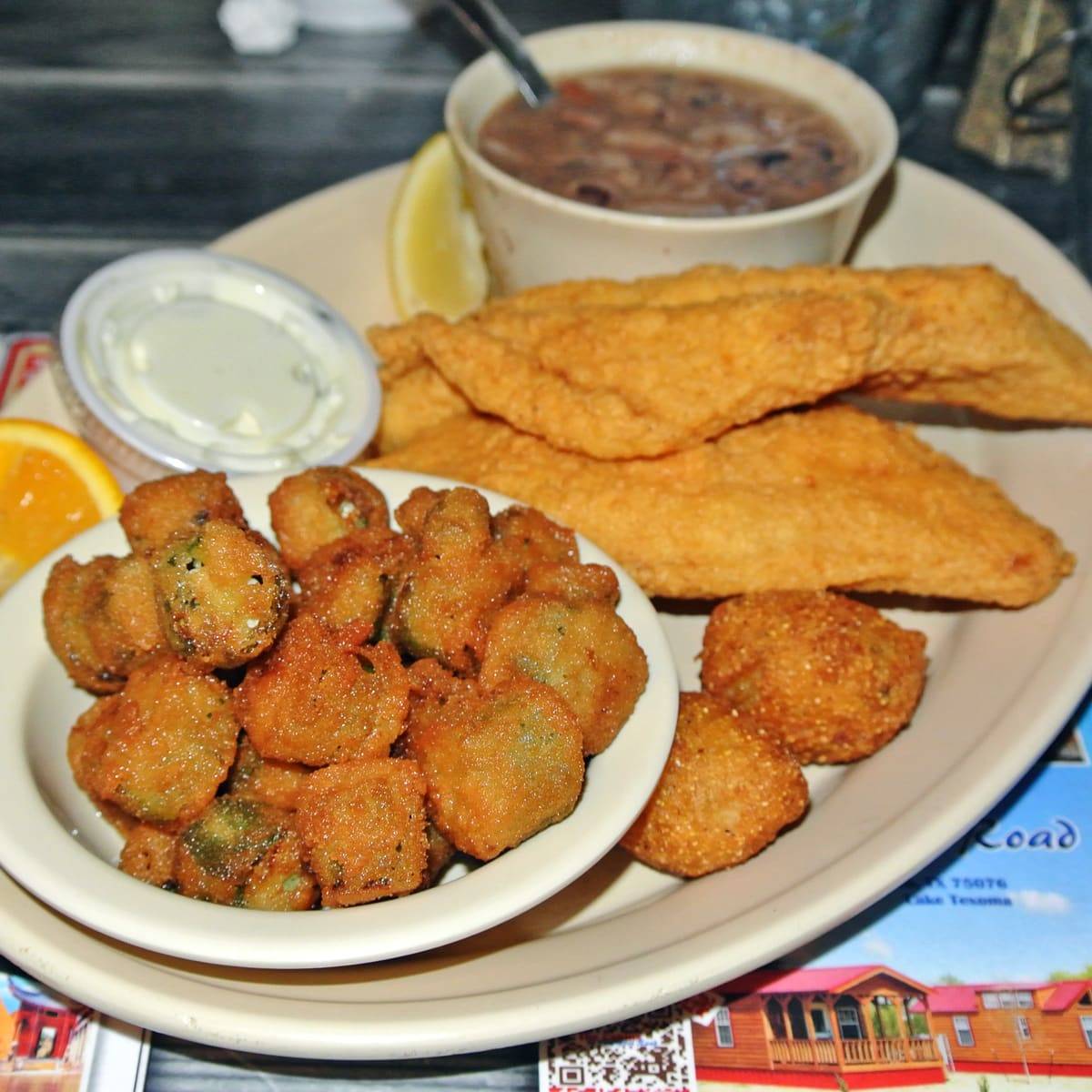 Now, I said that the meals come with veggie sides, but that’s a little bit of a misnomer. Sure, there are some vegetables offered, but they really just mean fried stuff and other classic Southern sides. They just for some reason refer to them all as “veggies”. The range of options is pretty extensive and a little all over the place, but I’d definitely recommend some choices more than others.

If they’re offering the Fried Okra, you’ve gotta get some. It’s only available on certain days, but it’s really the very best I’ve ever had. Those poppable munchie bites are super-light and have that same outstanding crisp, dry-fried exterior. These too are awesome with either a bit of vinegary Louisiana hot sauce or creamy tartar. 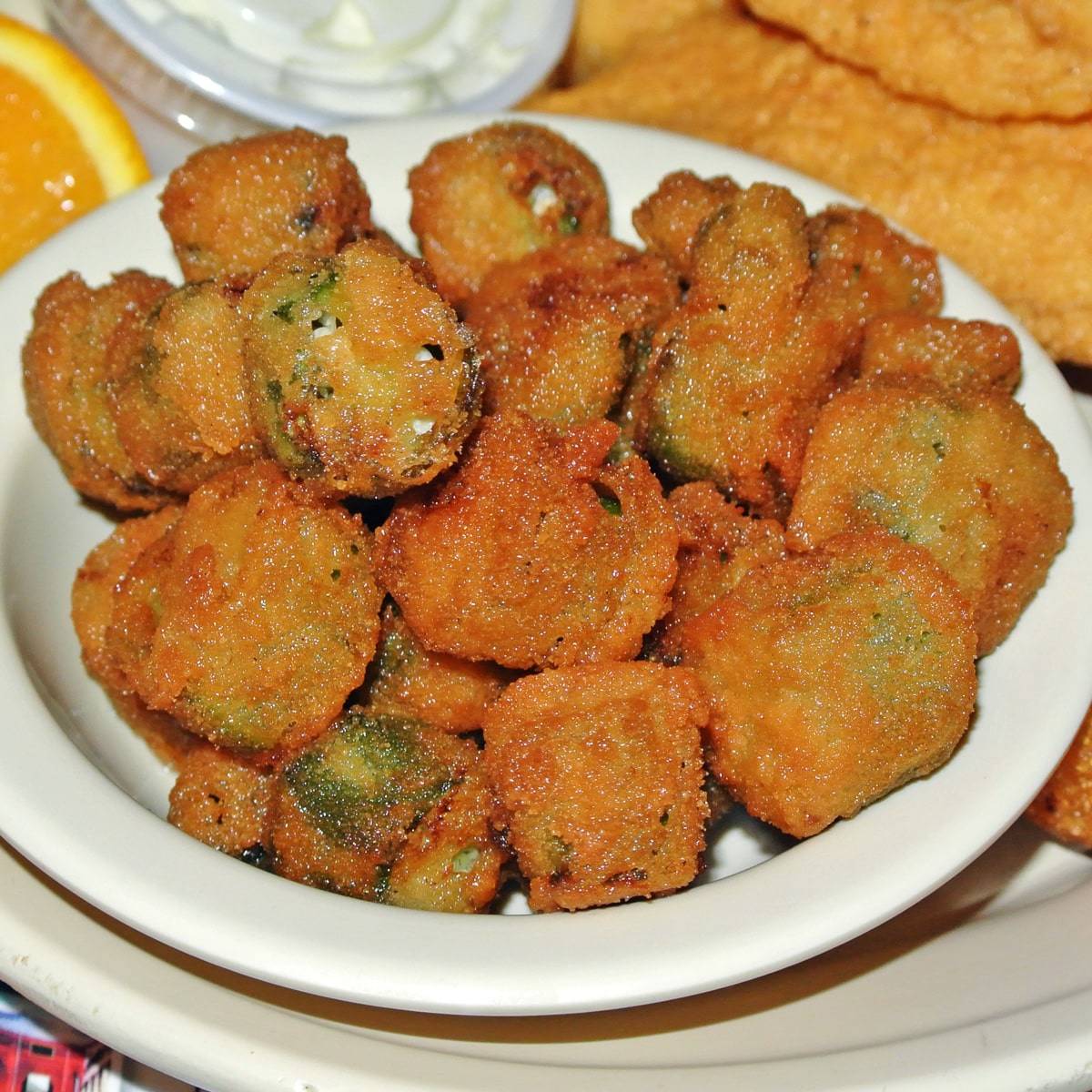 Another great pick is the Black-eyed Peas. Did you realize that that Top-40 pop group was named after a humble bowl of country-style beans? In any case, these beans are totally legit. They’re firm, nutty, and brothy and have a bold, deeply smokey, rich, bacon flavor integrated throughout. There’s also big hunks of bacon in there if you’re into that sort of thing. So, if you love bacon as much as I do, I’m sure you’ll love this side too.

Another highly recommended side is the Philly Creamed Spinach. Their bowls of silky smooth, creamy, spinach are outstanding. Make no mistake about it, there’s nothing healthy about this vegetal side. It’s extremely heavy on that rich, whipped Philadelphia cream cheese flavor – there’s a heck of a lot of it stirred up in there. This version reminded me a lot of the really great, famous rendition at Peter Luger’s Steakhouse in Brooklyn – a high praise. Actually, this one might be even more delicious due to its heavier use of creamy dairy.

If you do want to venture outside of the catfish mains, I’d recommend going for the Fried Shrimp Dinner. Huck’s really is the master of all seafood in breaded and deep fried form, though this treatment is a little different. Whereas the catfish was cornmeal crusted, the shrimp will arrive perfectly fried in a thicker, crispier, craggier, brown coating. The shrimp inside were extremely fresh and snappy – not frozen-tasting or destroyed by the frying at all. At $9.95 for a 1/2 lb of those guys with a choice of two veggie sides, this was a great alternative to the awesome catfish if you feel like branching out. 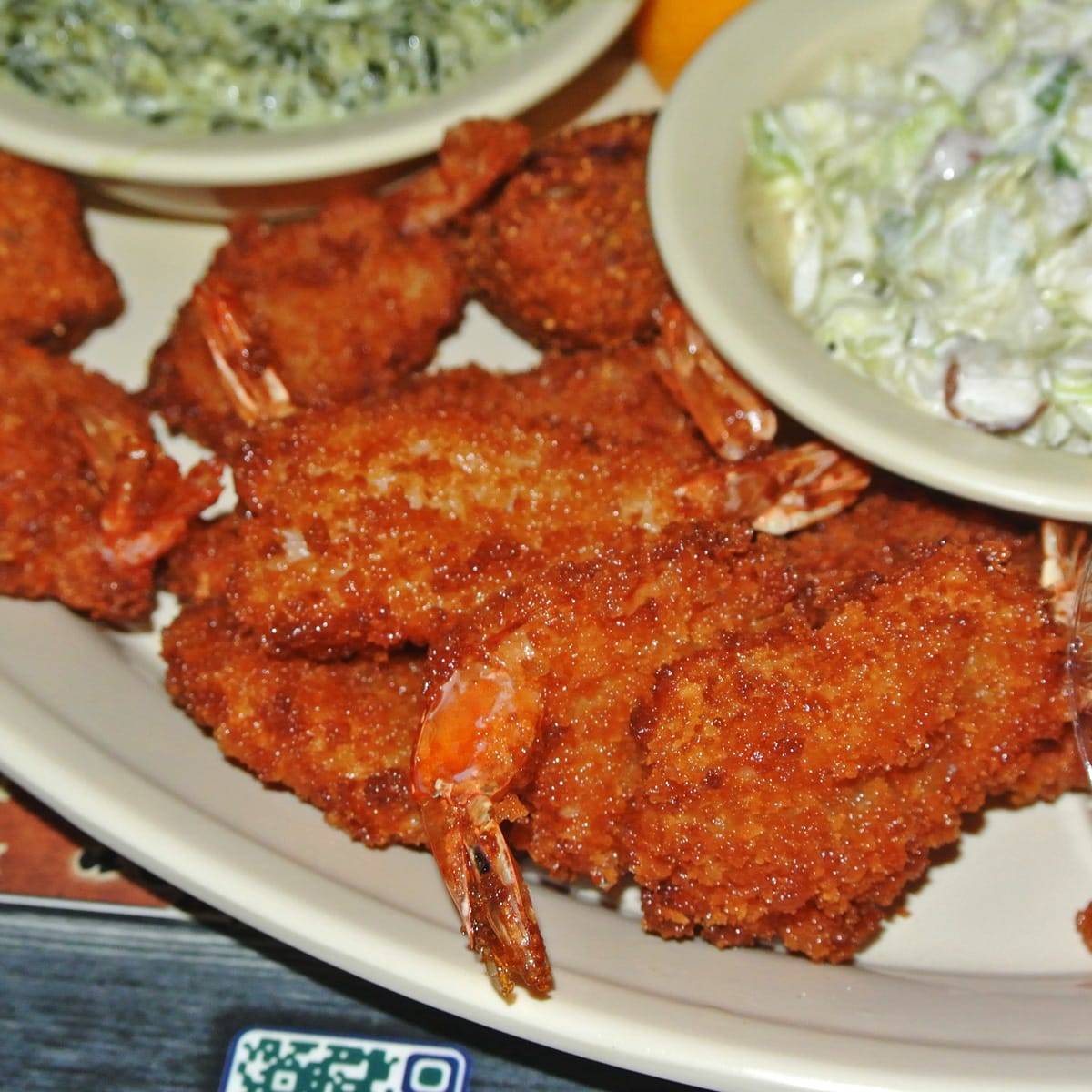 So, if you’re down with mountains of Southern fried foods and you find yourself north of Dallas, make sure to stop into Huck’s Catfish in Denison. Their homey, cheap, and impressively well-executed fried catfish and other traditional Southern sides are awesome every time I visit. As long as you stick to what they do really well, you’re gonna leave stuffed and extremely happy every single time.

Got another southern fried hotspot in Texas I should check out? Let me know in the comments below.