San Francisco’s Financial District is not exactly a neighborhood teeming with destination restaurants. But, if you know where to look, it is possible to find some solid places suitable for a date night. One place in particular called Per Diem is just oozing with that sexy, cozy date night vibe due to its lofty two-story space decorated with many unusual design touches reminiscent of the 1849 Gold Rush Era. This conglomerate of coiled copper piping, stitched canvas, dark wood, and raw stone lends itself to an almost steampunk aesthetic reminiscent of Will Smith’s Wild Wild West. I honestly don’t think that’s what they were aiming for, but I couldn’t help how I felt – it just did.

As I understand it, the restaurant has undergone a number of chef shuffles and a major menu restructuring in the past year since my visit, so it’s very possible that most of the dishes I tried have already been revamped or are no longer being offered. In any case, the menu did and still does follow the ever-popular Cal-Ital template of taking classic Italian recipes and manipulating them to feature the fresh, local, Californian ingredients. And for the most part, this methods works just fine though I definitely spotted many other culinary influences scattered throughout the menu. 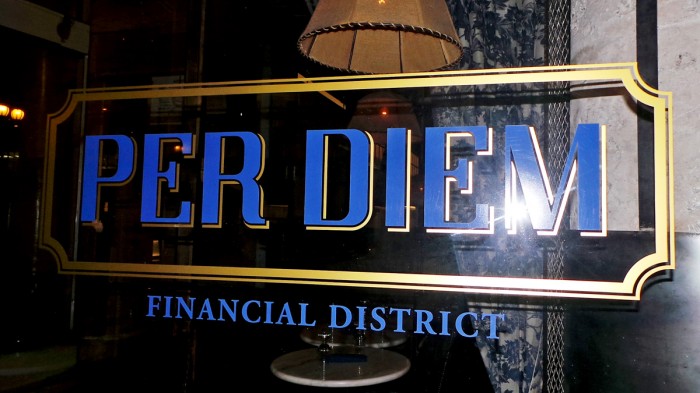 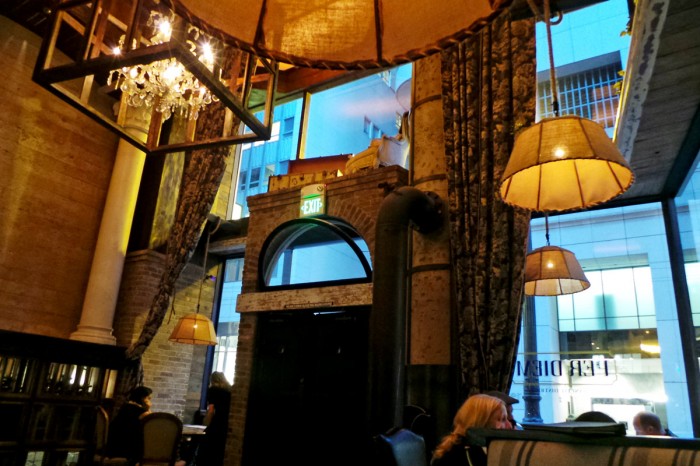 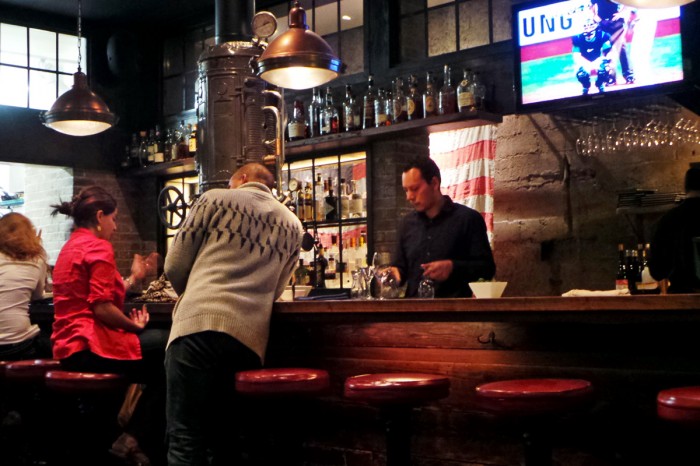 Like any good date night restaurant should, the bar featured a pretty extensive mixology menu with many cocktails ranging from $9 to $13 often with money-related names to fit the Gold Rush theme.

I started off with one called the Greenback which was made with Dickel Rye, Chartreuse Verde, Punt e Mes, Angostura Bitters, and an orange peel. I always tend towards whiskey cocktails, so this was right up my alley. This was a nice creation that leaned heavily on bitter and tangy elements with just a touch sweetness. I wasn’t sure why the $13 price tag was necessary for this one – I guess the Chartreuse is a pricey ingredient? 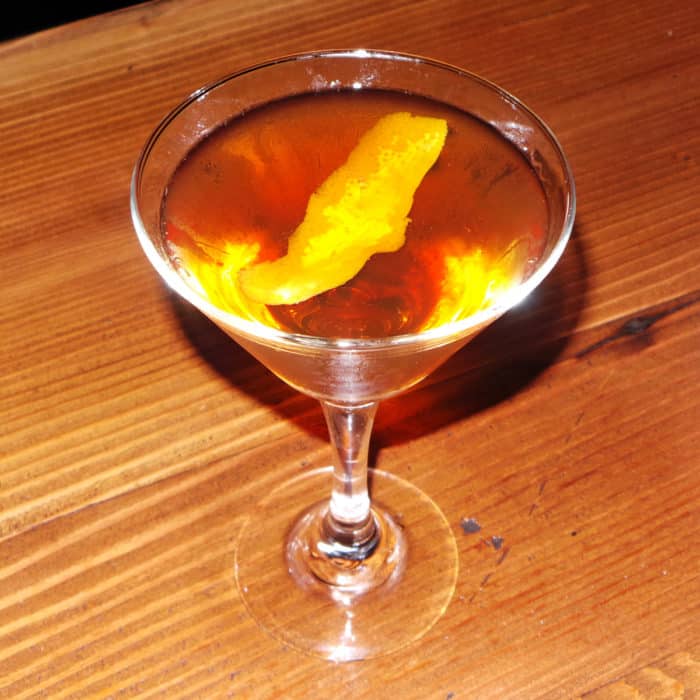 Later, I followed up with a Gold Rush, which was made with Buffalo Trace Bourbon, honey syrup, lemon juice, fresh mint. At $10, this minty, herbal whiskey drink seemed much more reasonable. It was very drinkable and went down easy. I could see myself drinking more than one of these in a sitting. 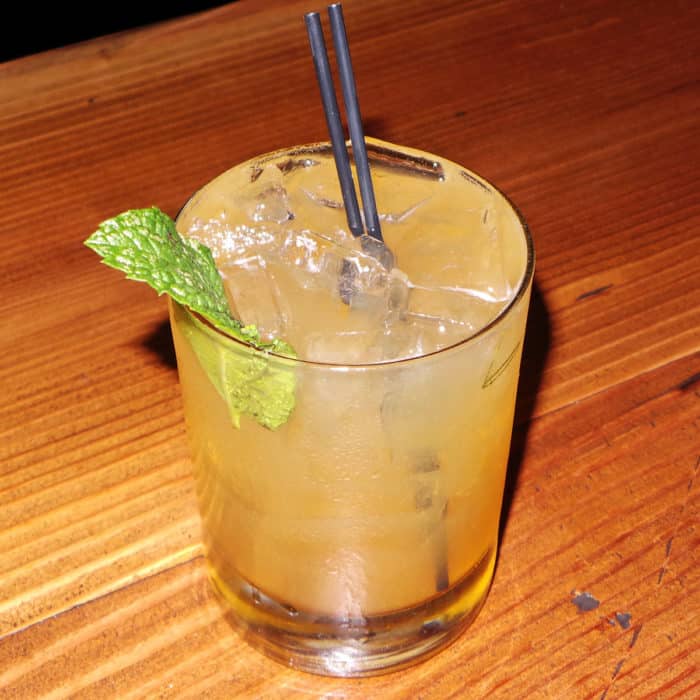 As a starter, I ordered a dish I pretty much can never resist – Beef Carpaccio. This is was definitely one of the most dressed up versions of the dish I’ve ever had. It was covered with ancho chilies, spring onions, green garlic, horseradish, creme fraiche, and crackers – a whole lot more than the normal simple treatments I know and love.

The horseradish cream sauce came on really strong and sort of dominated the dishes flavor profile. Also, the meat’s browned edges were a little odd and disconcerting. Carpaccio is supposed to just be completely raw, thin-sliced beef but I think this one had been seasoned and was seared on the outside before slicing. The texture was actually pretty good in its own right, but not something I’m used to finding in a carpaccio. This was more like a high-quality, dressed roast beef plate than a traditional Italian carpaccio.

As another decadent starter, I selected the most tipped about dish on the menu – the Bone Marrow & Escargot. This was one magnificent looking bowl of bone marrow. The dish included two massive beef bones halved lengthwise. They were both dressed in Pernod butter, capers, cherry tomatoes, lemon, bordelaise and handful of roasted escargot. As is usually the case with bone marrow, the bones were cut unevenly leaving one bone more full of marrow than the other, which I know is hard to help, but it still does bother me.

This rendition of bone marrow was insanely good though. The marrow was roasted well so that it transformed into a creamy, melty substance I can only really describe as “meat butter”. And placed throughout the bowl were perfectly executed escargot – piping hot and nothing chewy about them. They were extremely tender and just like the marrow had a sort of melty consistency.

The variety of bold toppings worked pretty well too. They were insanely intense, flavorful, and garlicky. And the combination of capers and bordelaise actually reminded me of balsamic vinegar in a good way. The marrow and escargot soaked up the flavors from the all of the other ingredients and each subsequent toast-spread bite left me wanting more. 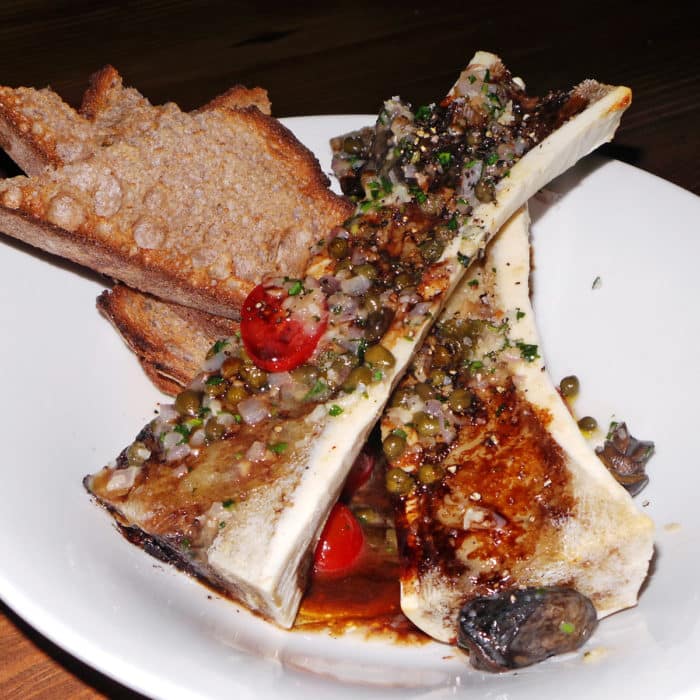 For my main, I ordered their Bucatini. I truly do love bucatini. It’s that chewy texture that easily makes it my favorite pasta shape. This rendition came topped with a solid and straight-forward pork bolognese all’arrabbiata, shaved pecorino, and crispy basil leaf – a simple, but excellent meaty topping. Hard to complain about this one, but there were definitely no surprises here. This was just a straight up Italian classic.

So, everything I had at this beautiful Financial District restaurant was pretty good. The cocktails were nicely made and all of the food I tried was pretty tasty. But, with so many great restaurants in San Francisco, I have never found myself compelled to return for a second visit. I think this probably speaks less to the restaurant itself and more to its Financial District location. But, I’m sure a time will come when I need a solid place in the neighborhood and Per Diem will be there for me to experience again.

Got another solid date night spot in San Francisco’s Financial District that I should check out? Let me know in the comments below.

A Bounty of Beer and a Ridiculous Reuben at Mikkeller Bar in Union Sq.