As for how Oren’s Hummus Shop came to be, it’s a classic story about chasing the American Dream. As it goes, Oren Dobronsky was a successful technologist thriving in the Tel Aviv startup world. Drawn to the shiny allure of Silicon Valley, he relocated to live and work in the epicenter of tech innovation. But, in Palo Alto, there was one major thing missing – there was none of his homeland’s beloved hummus to be found. So, he took matters into his own hands in partnership with his wife and opened Oren’s Hummus Shop, a single fast-casual shop on University Avenue serving up incredibly authentic hummus and other Israeli specialties just like they had back in Tel Aviv. Since then, Oren’s has expanded beyond the single Palo Alto shop to include a convenient Mountain View outpost where I find myself going much more often.

The new Mountain View location is located right on Castro Street, the main restaurant-loaded downtown strip that I frequently head to for anything from ramen to curry, sushi, or even upscale American food. This location looks pretty much just like the Palo Alto location – another big, airy space with a consistently classy, polished design style throughout. It’s quite comfortable inside, though if the weather is nice enough, I’d recommend taking advantage of their outdoor seating out front. 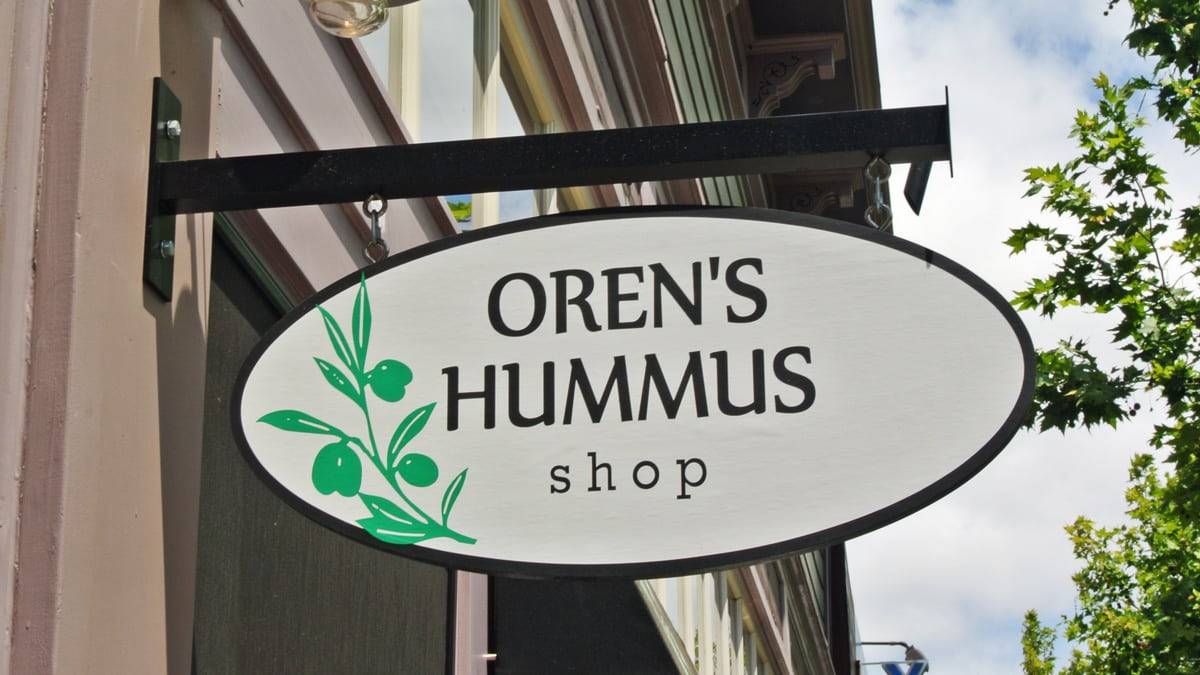 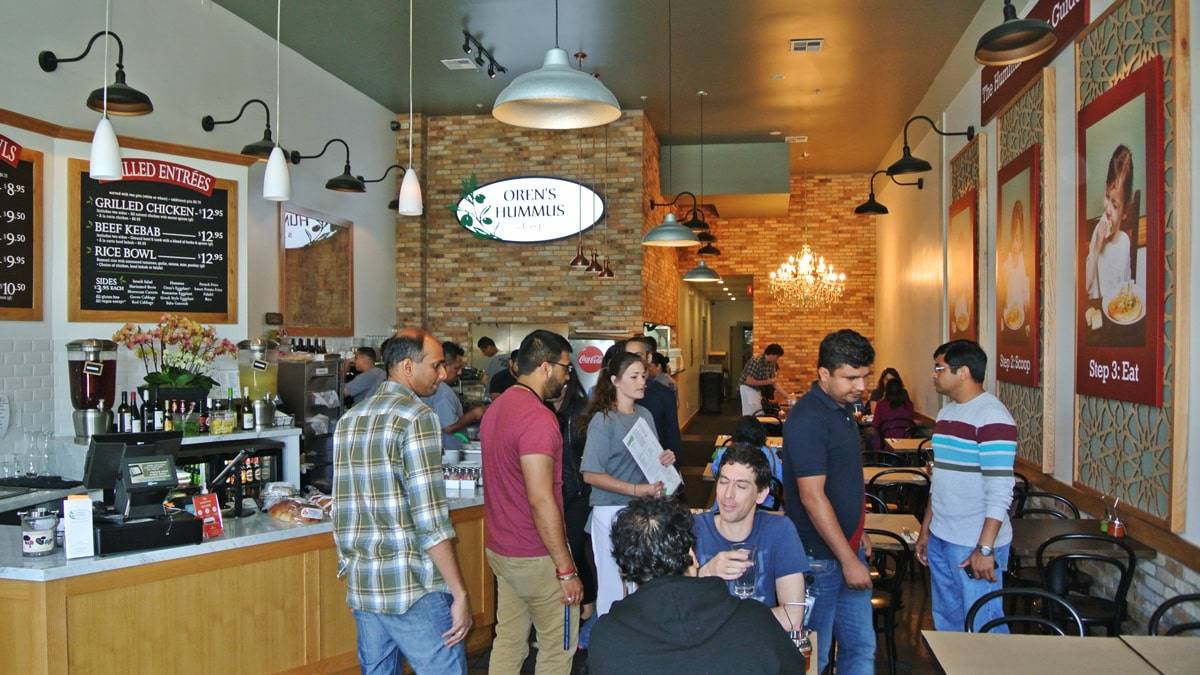 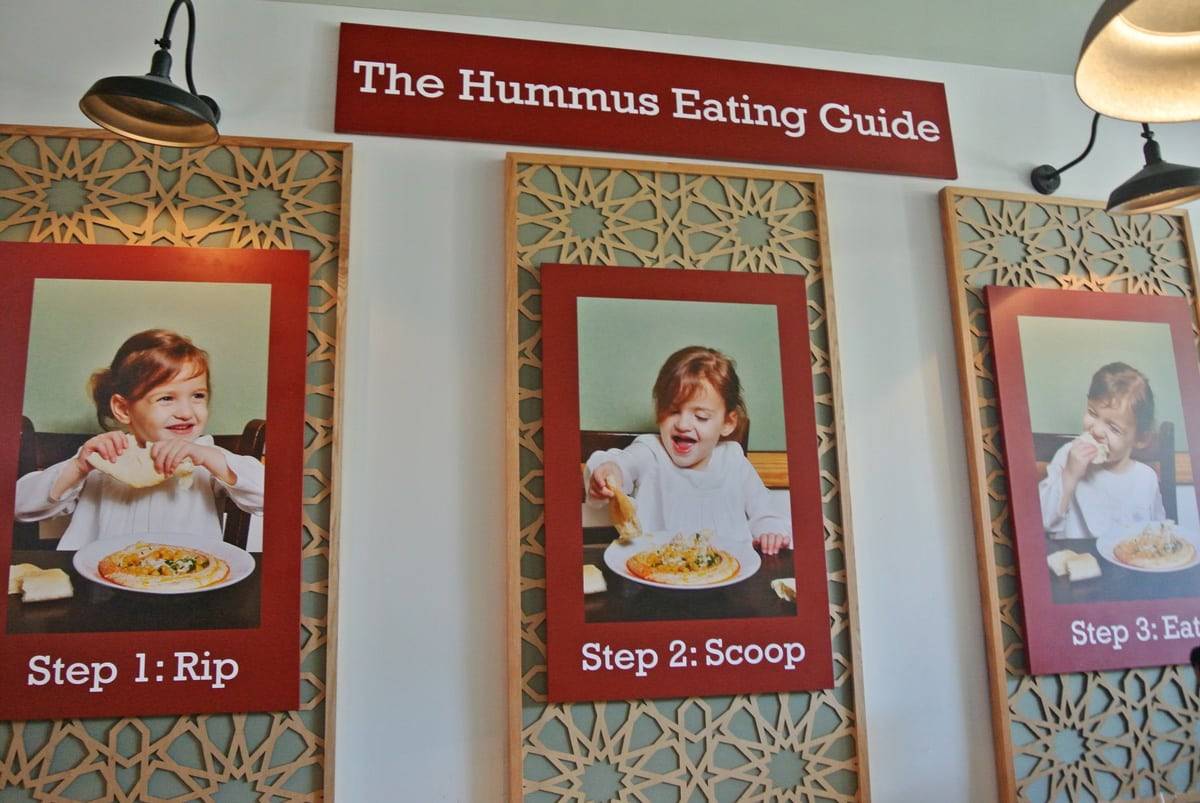 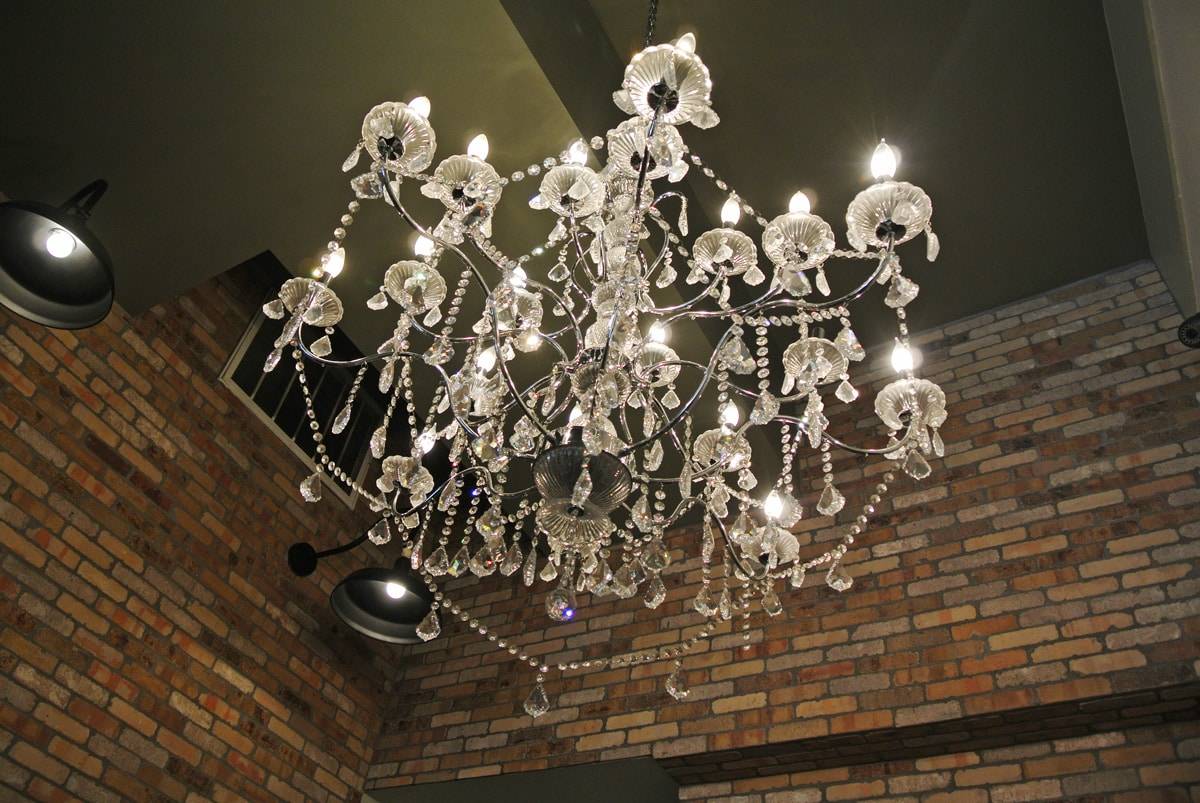 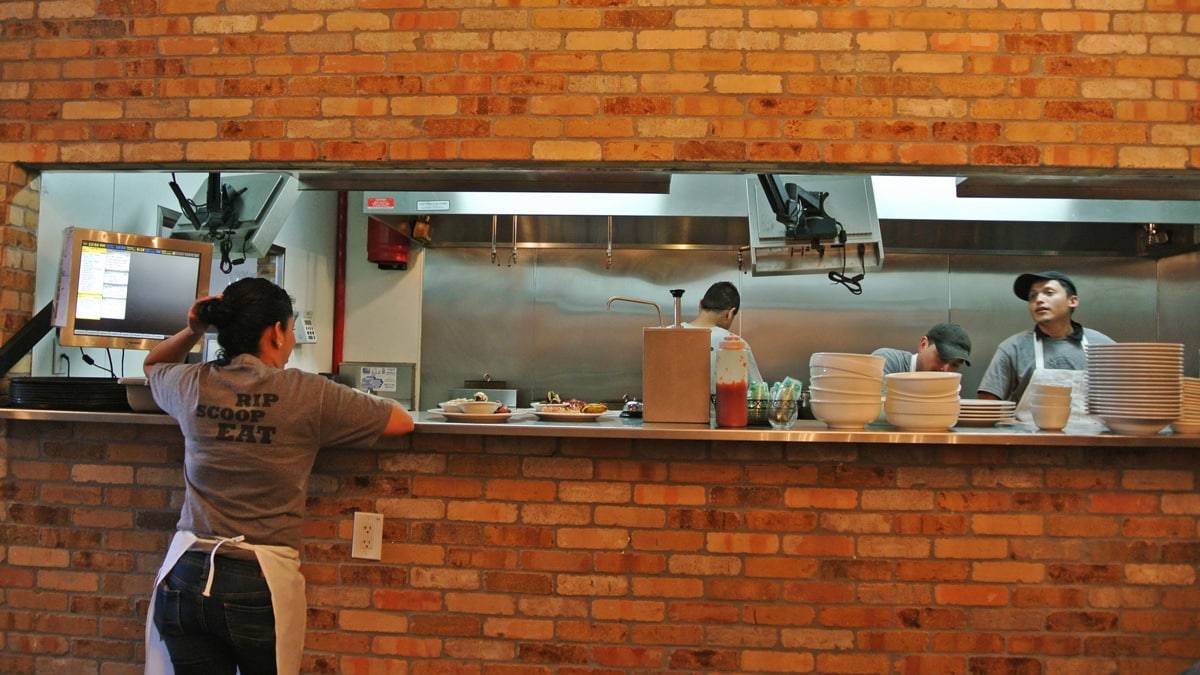 When a craving for this kind of Middle Eastern food strikes, Oren’s is the only place I want to go. Yes, I can vouch that their hummus is truly outstanding – not just by the standards of hummus-deprived Silicon Valley, but by authentic Israeli standards.

I’m a particularly big fan of their famed Hummus Beef which involving taking their traditional, silky smooth hummus and topping it with a bold, Moroccan-spiced ground beef mixture and pine nuts. For $10.95, you’ll want to order this as a starter to split with the table. Every order comes with a basket of their of outrageously good hand-made pita bread, which they offer in both white and whole wheat varieties. Both are extraordinarily fluffy and pair with the hummus extremely well. 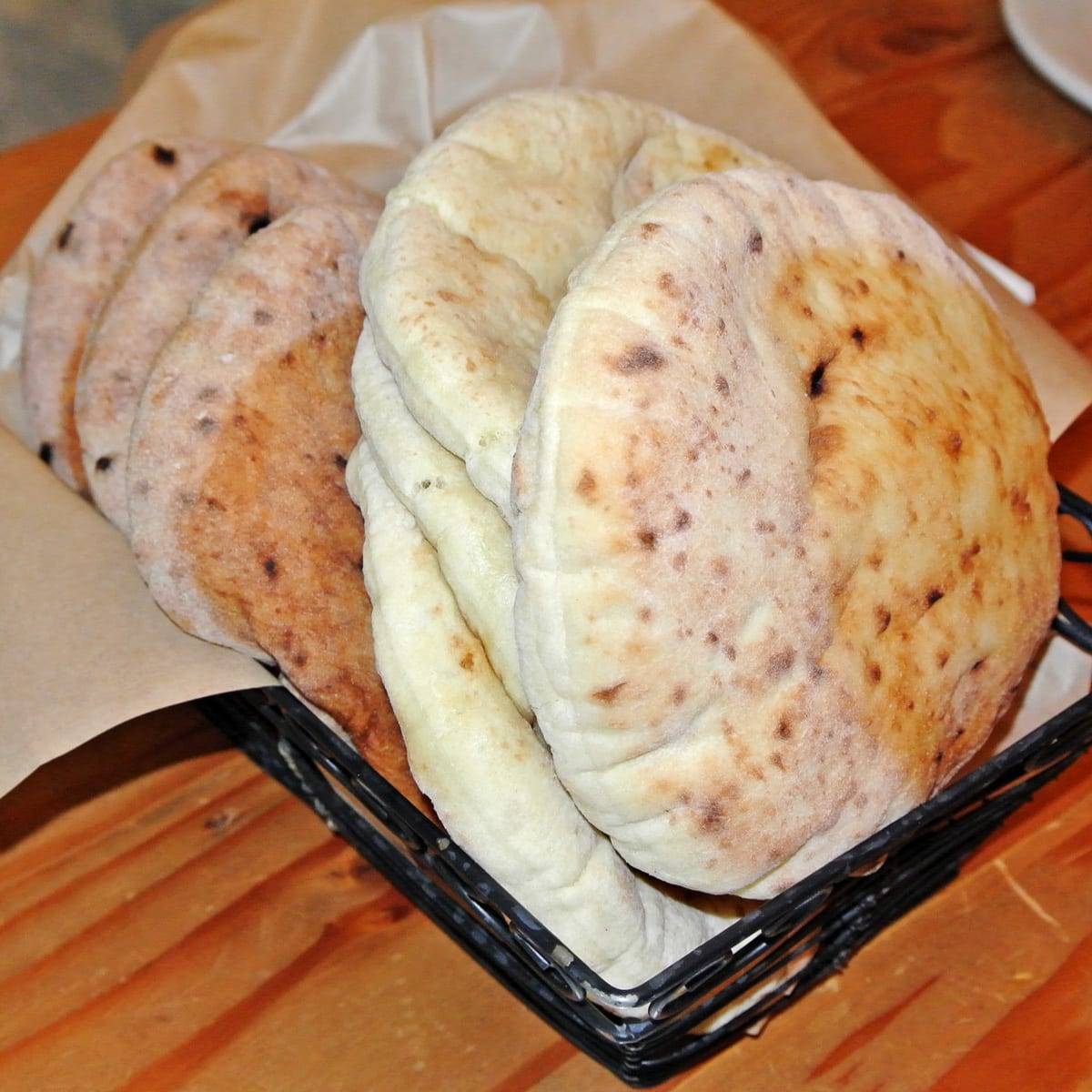 If your looking for a vegetarian-friendly, meat-free variety, there’s plenty of options as well. The Hummus Mushroom is a great alternative to my meaty favorite. For $9.95, the bowl of creamy chickpea dip is topped with mushrooms, sautéed onions, and vegetable broth – a vegetarian topping that enhances the dish’s natural flavors nicely, though I’m still definitely partial to the in-your-face beefy one. 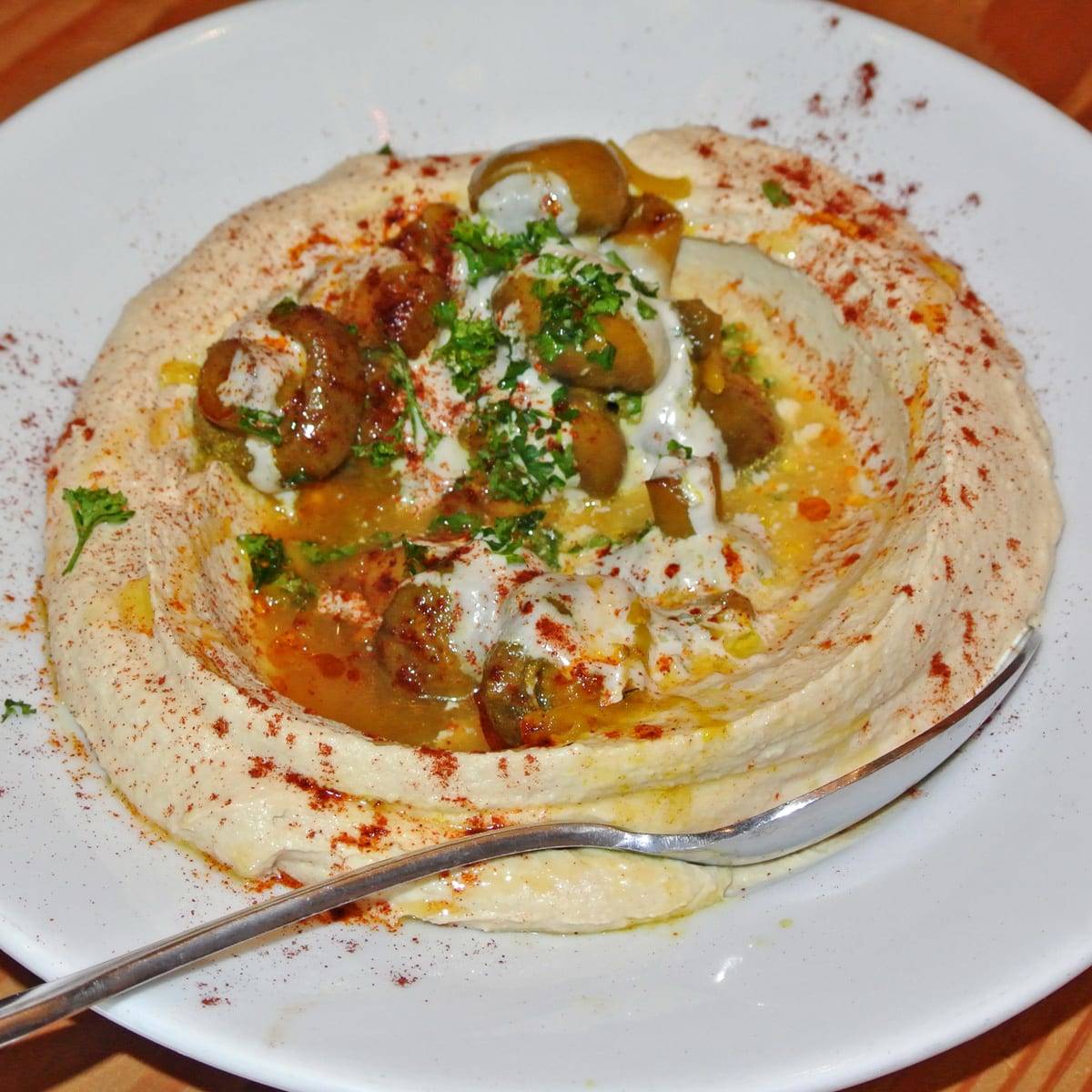 But, hummus isn’t the only thing that’s great at Oren’s. The menu is jam packed with great, filling, satisfying lunch platters and sandwiches including a monstrous sabich sandwich for $9.50 that easily rivals the one at Taim in NYC that I’ve named “my favorite vegetarian dish in NYC”.

If you’re not in the mood for a pita sandwich, I’d recommend the Beef Skewer platter which comes with three hunks of grilled meat along with any two sides of the 16 options offered – all for $12.95. I realize that this may sounds like a lot of money for lunch, but this always ends up being a heck of a lot more food than even I need to fill up.

Though the dish is called Beef Skewer, there are not actually any skewers on the plate. The spit-roasted meat will already be removed from their metal rods when it arrives, so they end up looking like large, oblong meatballs with a beautiful glistening charcoal-grilled crust instead of sad meat-on-a-stick. Though the dish’s name didn’t say it, the description indicated that the meat was actually a ground beef and lamb mixture. It was super-juicy and a very pleasant, well-spiced gaminess. The Middle Eastern spice blend worked perfectly with the bold, charcoal overtones. And while it’s hard to go wrong with any of the sides with it, I’d recommend one of the many creamy dips to spread directly onto the meat. 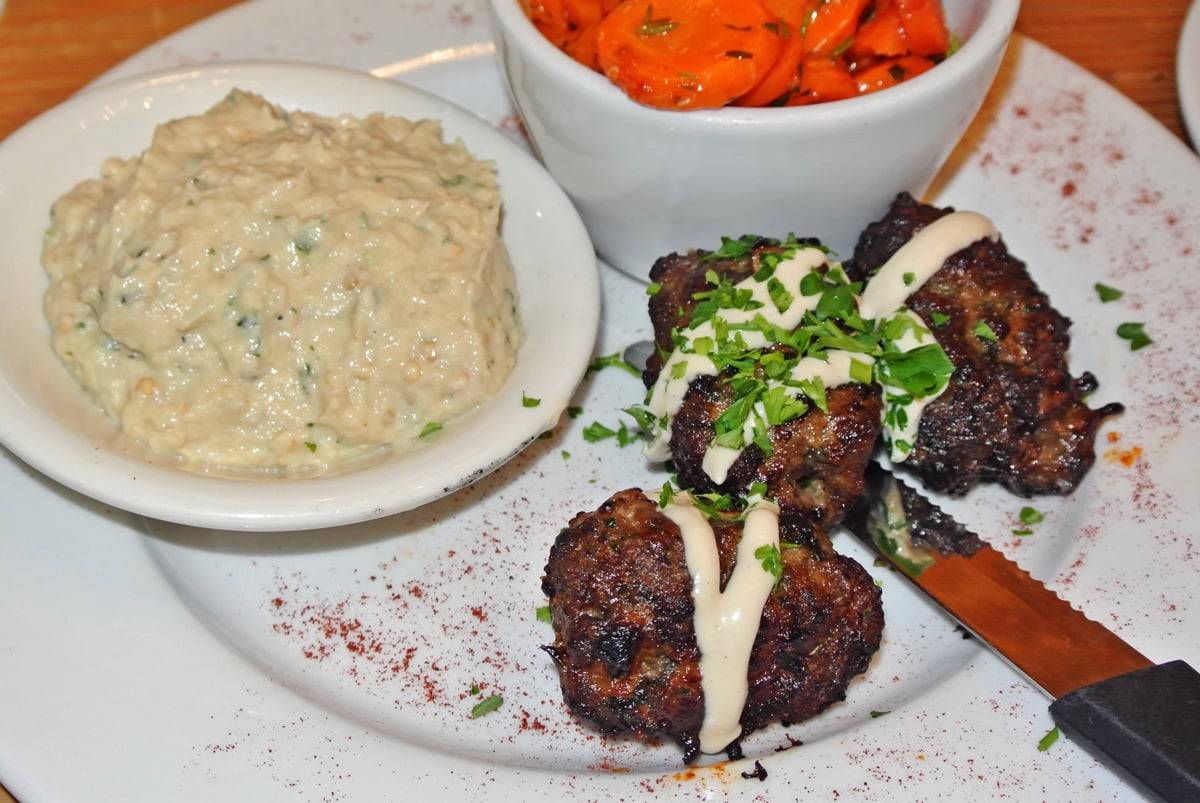 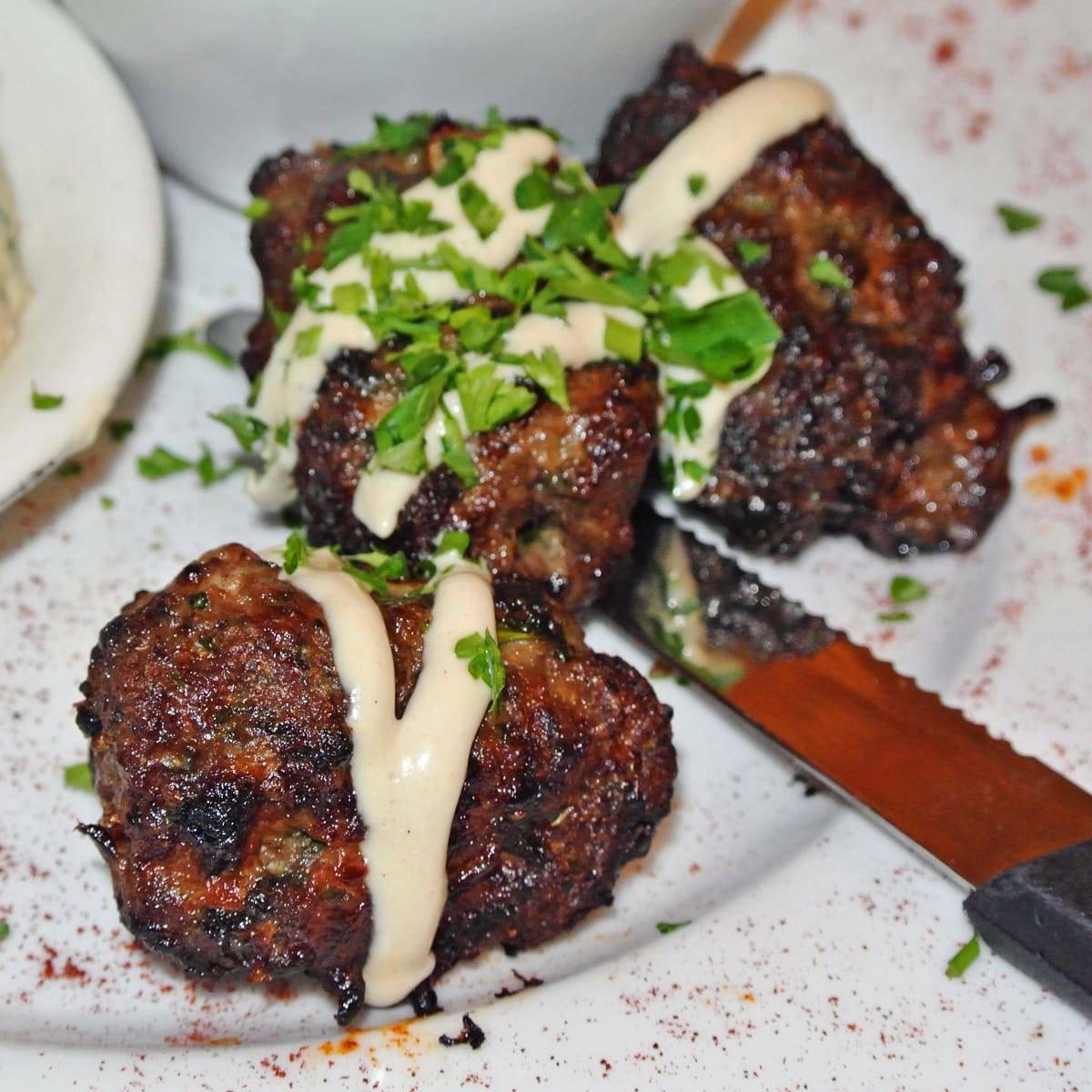 But, if none of the menu’s mains call your name, there is one other way to create a satisfying meal at Oren’s. For $10.50, they allow you to select a trio of sides – a true steal for the impressive variety of the excellent Israeli sides available. There’s so much to choose from, with plenty of dishes to keep vegetarians happy, though there’s some that I’m certainly partial to. 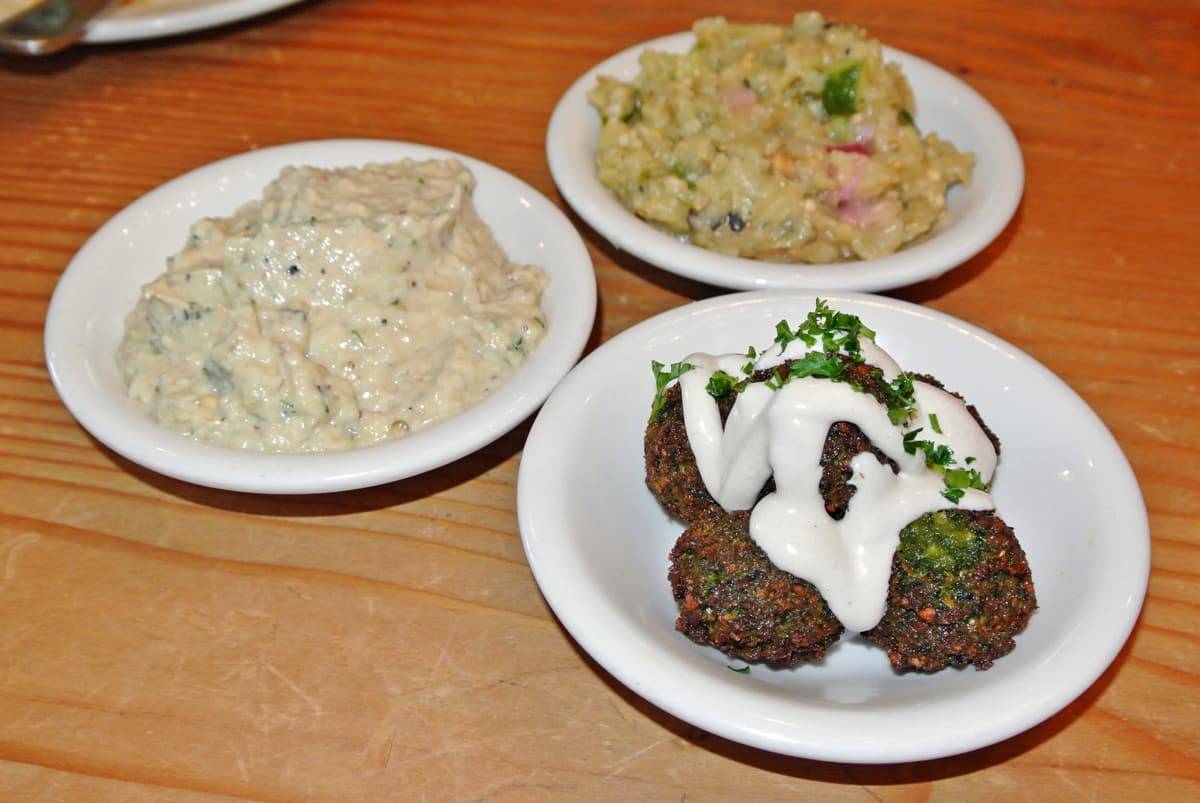 A Trio of Sides

The Moroccan Carrots may not be an obvious pick, but they really are excellent. Hell, I don’t even really like carrots, but these are so flavorful and nicely cooked that just can’t resist crushing an entire bowl. The thin orange discs are cooked until they become soft and tender – a characteristic I don’t often find in carrots. They come dressed in an incredibly delicious blend of olive oil, garlic, and harissa that added a noticeable kick of extra flavor and heat to each bite. If I was forced to eat carrots, this is how I’d want them. 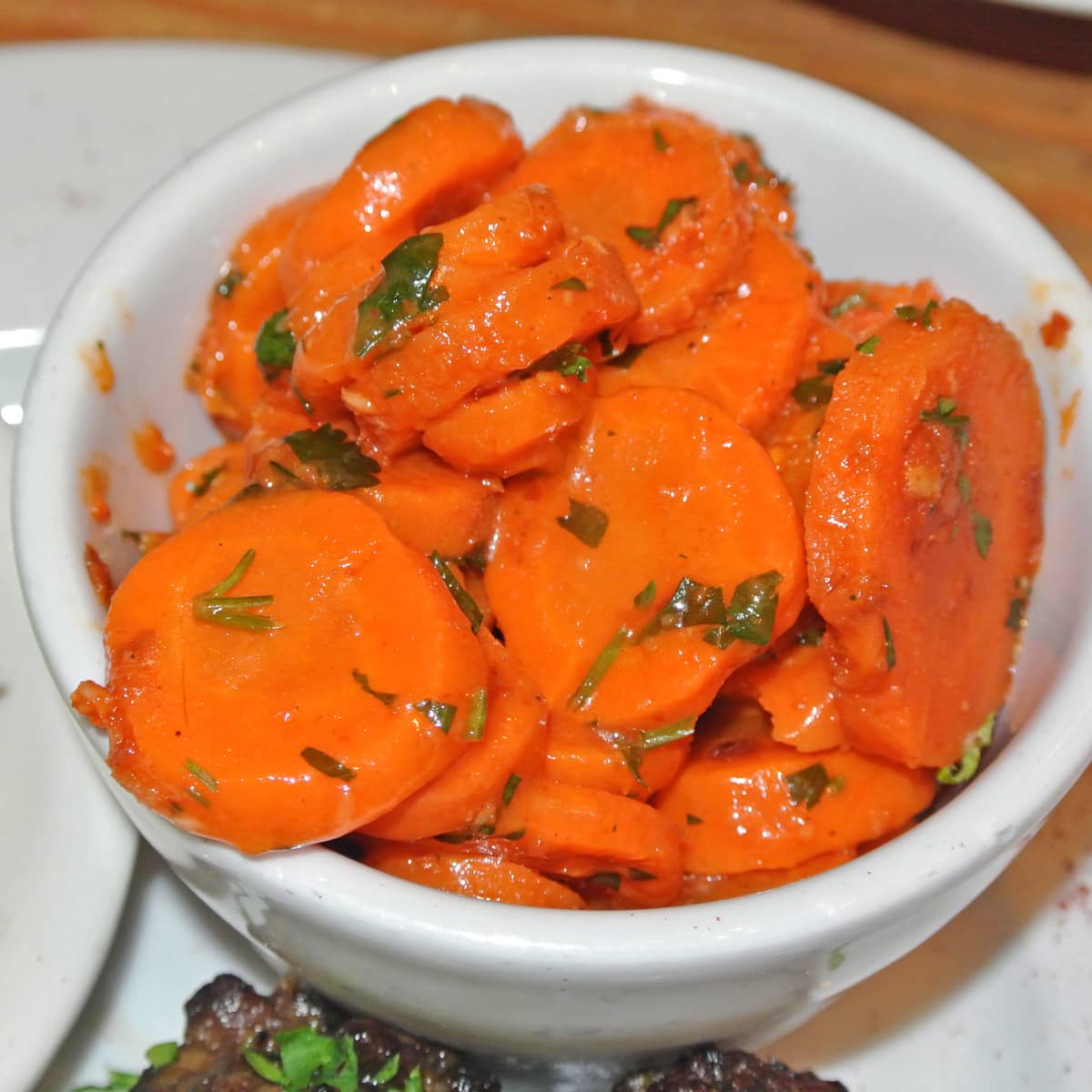 An more obvious selection is the Falafel Side includes five balls to an order. They come fried to a perfect, crispy, golden brown with a tender, chunky, bright green, herbal interior – simply adorned with a drizzle of creamy tahini and parsley. I could probably gripe about the size of these balls – they’re definitely on the small side – but, I think that their size actually improves the ratio of soft interior to crispy crust. These are definitely the best falafel I’ve found in the Bay Area. 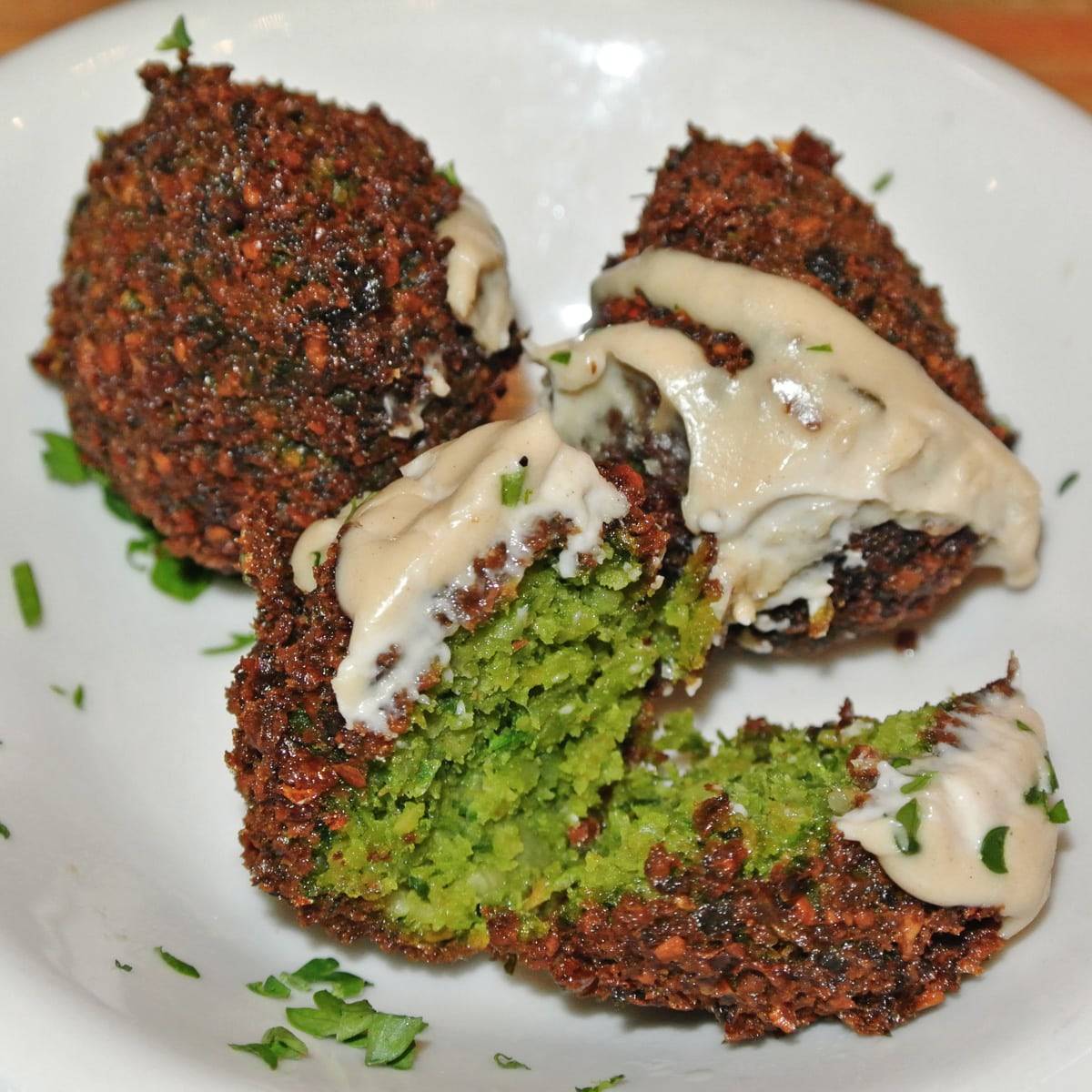 And while Oren’s is probably most famous for their chickpea-based hummus varieties, I’d be remiss not to mention all of the outstanding, specialty eggplant dips made in house.

That Babaganoush Eggplant – dear god – that stuff is out of this world. Every single time I have it, it’s better than the last. It is without a doubt the best babaganoush I’ve had anywhere – yes, anywhere in the entire world. The consistency of the roasted eggplant dip so amazingly silky smooth and it has such an unparalleled smokey richness that I have never found anywhere else. It’s great when spread onto fluffy pita bread, onto falafel balls, or even spooned directly into your mouth – it’s that good. This is truly incredible babaganoush – no visit is complete without it. 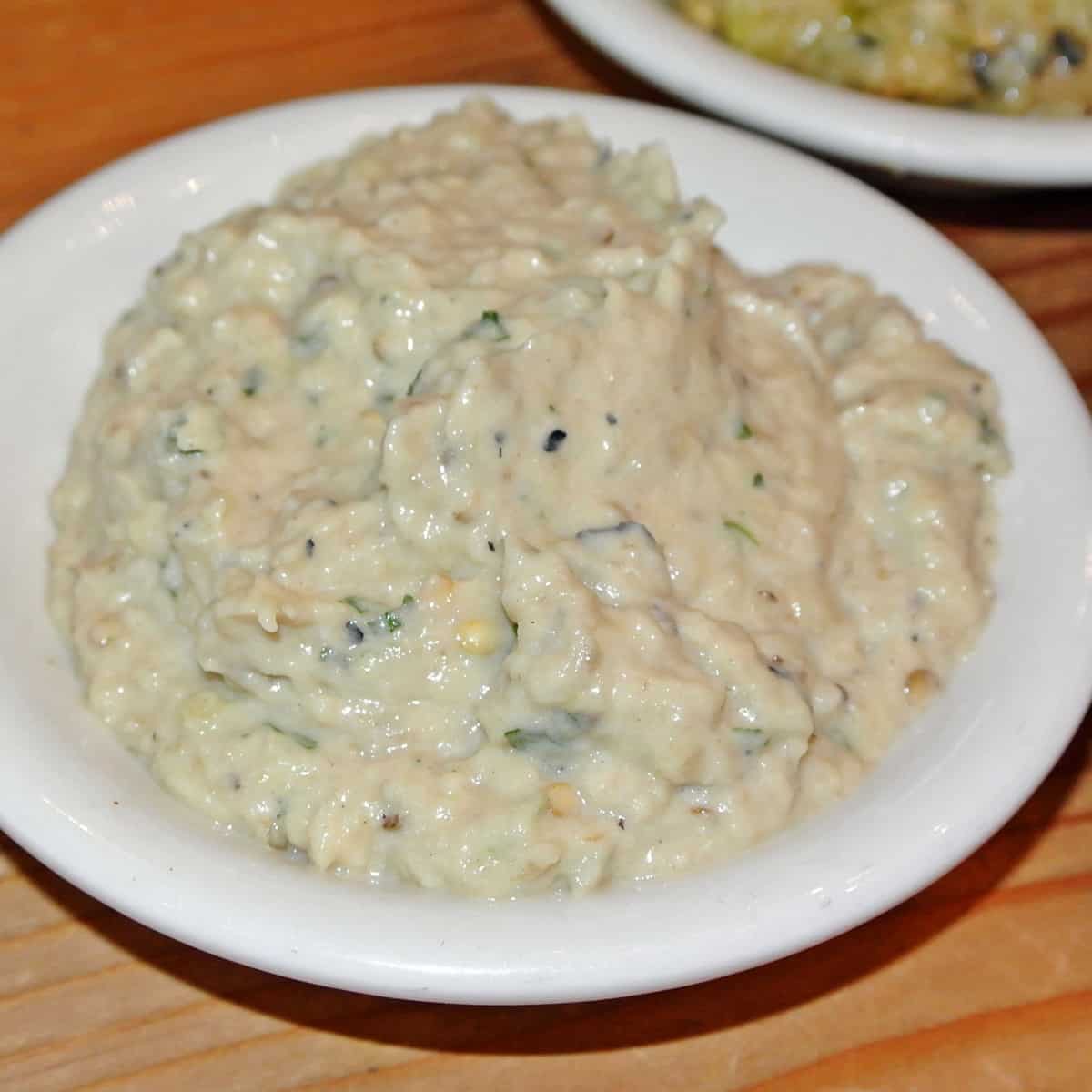 For a very different variation of eggplant dip, you might enjoy the Greekstyle Eggplant which has a much lighter and brighter flavor profile than the babaganoush. The whipped eggplant is combined with cucumber, dill, onion, tomato, and parsley and tastes distinctly beachfront Mediterranean. I like this one too, though it’s not quite as irresistible as the former. 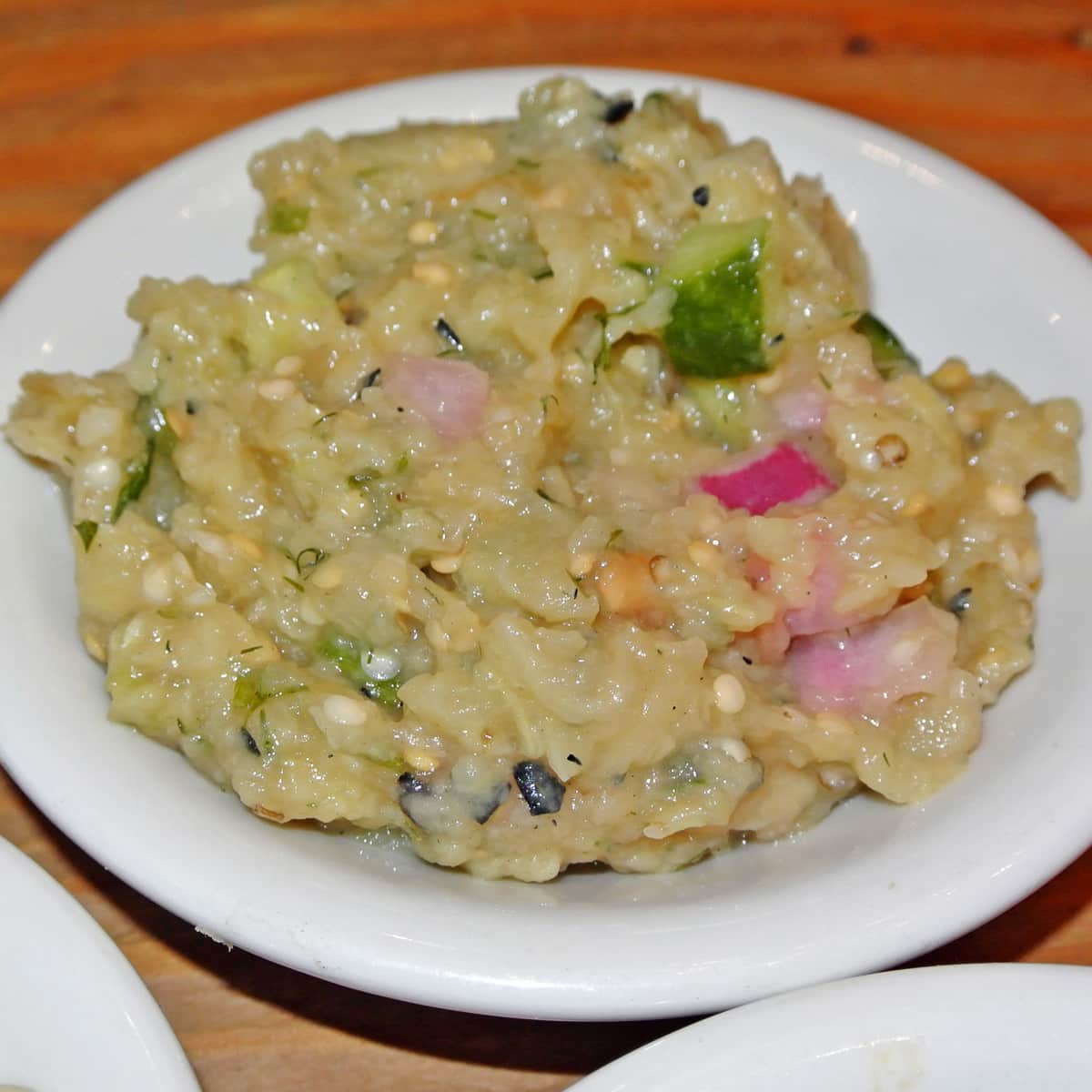 For a truly innovative eggplant preparation that you’ll only ever find at Oren’s, try the Oren’s Eggplant. It is another really interesting option that has a deep, dark brownish color and a surprisingly sweet flavor.

It’s made by blending up fried eggplant discs with caramelized onion, hard-boiled egg, and a variety of spices. Clearly the caramelized onions and fried crust are responsible for the odd color and overarching flavors. This is certainly one of the more unique and unusual things I’ve had at Oren’s, but like nearly everything else they offer, it’s damned delicious.

So, I’m really happy to actually have a suitable shop in the Bay Area capable of quenching my intense hummus, falafel, and babaganoush cravings – even if both locations are in Silicon Valley. I’m crossing my fingers than one of these days Oren will be ready to expand into downtown San Francisco, but until then, a trip to Palo Alto or Mountain View will have to do.

Got another great hummus and falafel shop in the Bay Area that I should check out? Let me know in the comments below.