I don’t think it would come as any surprise to any of my readers that I’m pretty obsessed with meat. All types of meat. And to be honest, I usually don’t consider a meal complete without the inclusion of some sort of meat.

But, a situation recently arose that gave me the perfect excuse and opportunity to check out a completely vegan restaurant that I actually had interest in trying. Amy’s vegan and gluten-free cousin was staying with us in SF and it was my task to find suitable places to eat that we could all enjoy. I had heard wonderful things about the Mission vegan Mexican spot named Gracias Madre so I figured that it had the greatest shot at solving our puzzle. Seriously though, people love this restaurant. By reputation, it’s the kind of place that people claim will make meat-eaters completely forget that everything they are eating is even vegan. That’s a tall order – I’ll see about that. I’ll put that crazy claim up to the ultimate test – me.

Gracias Madre is located right on Mission Street amidst the gross trash-covered sidewalks, Mexican locals, drugged up beggars, and mustachioed hipsters. This neighborhood used to be home solely to Latinos, but has just gone through a pretty drastic demographic change as a result of gentrification that has drawn in hordes of these too-cool-for-school hipsters. And this kind of gentrification has also become a beacon for yuppy-magnet restaurants that includes a particularly large density of vegan spots.

But, the neighborhood is definitely still rough around the edges. When you approach Gracias Madre, it seems to come out of nowhere. The streets around it are dingy and run-down as hell. But, once you pass through their warm, inviting, iron-clad entryway and find your way into the lively, hipster-filled Mexican hot spot, you’ve already all but forgotten about the streets out front.

Surprisingly, even without a reservation, we were able to get seated immediately. And as I sat there looking over the menu it truly struck me that there really REALLY wasn’t any meat or cheese on the menu. I guess up until that point I almost didn’t believe that this (or any) Mexican restaurant could actually have zero meat and cheese anywhere, but clearly it is possible.

My doubts about what I had gotten myself into had surfaced their ugly head and were aggressively spiraling, but I regained my composure by pulling up Foursquare to look over tips to guide me through which dishes to order. “OK ok, I can do this”, I reassured myself. All of the tips were so extremely emphatic and enthusiastically positive – they at least made these vegan dishes sound delicious which instilled more confidence in my doubt-riddled decision to eat at a vegan restaurant. So, Amy and I blindly followed all of the online suggestions and hoped for the best. 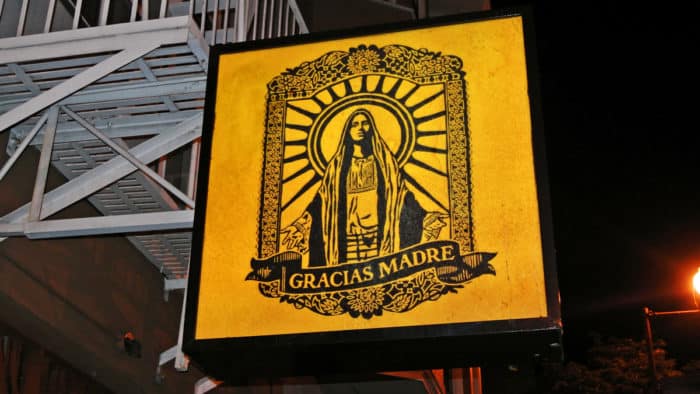 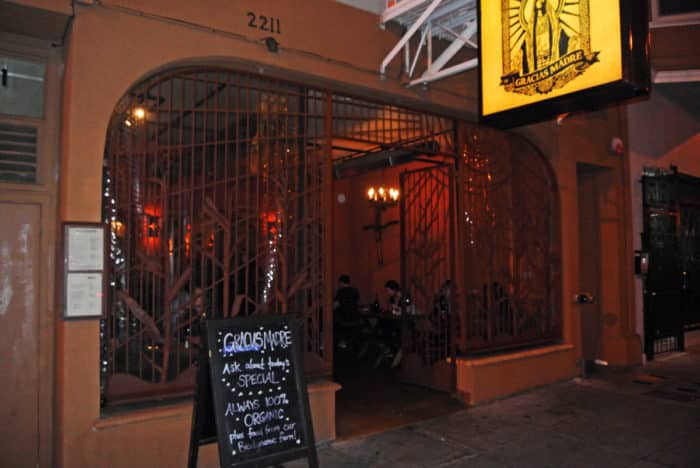 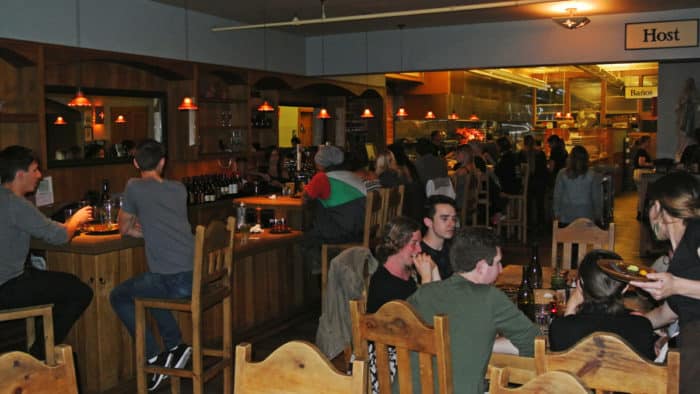 To start off, we ordered a Mexican Hot Chocolate (as recommended online). As we placed the order, I couldn’t help but wonder how they could possibly pull off hot chocolate without milk. Milk, of course, is not a vegan-friendly ingredient but is a nearly essential element in hot chocolate.

As it arrived, I was first struck by the beautiful, meticulous preparation of the drink. If it wasn’t delicious, it was at least very pretty!

It was served in one of those traditional, thick, brown, Mexican, clay vessels and appeared to have been torch brûléed before presentation. The beverage was on the thin side, wasn’t particularly hot, and was only moderately spicy, but there was no denying that this gorgeous faux-chocolate drink was absolutely delicious. For a healthier alternative to the calorically excessive regular variety, I could certainly deal with all of these caveats. 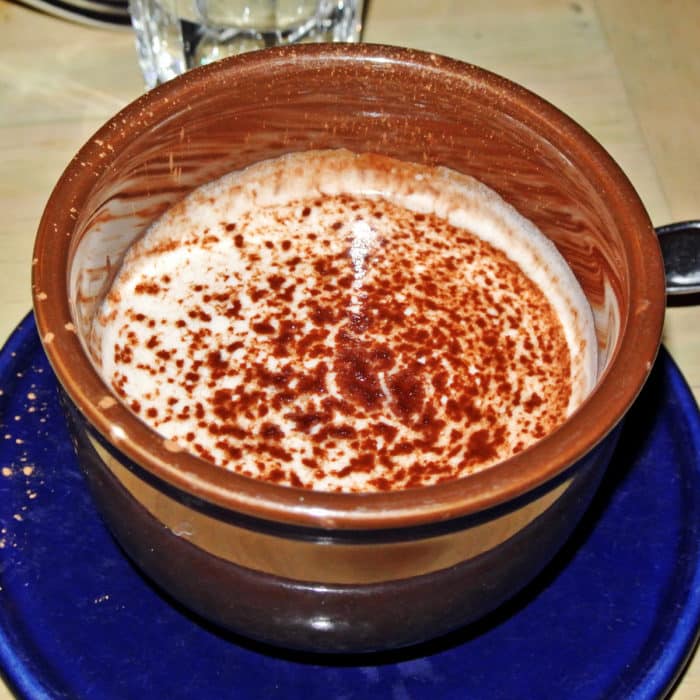 To kick off the meal, we all shared an order of the fried cauliflower appetizer called Coliflor Frito. This was the only selection we were bold enough to order that was not explicitly recommended by online tips. The menu described the dish as having a nacho cheese topping – but, again, how could that even be possible? Real cheese cannot be vegan. Well, they somehow came up with a suitable vegan substitute that did indeed contribute the desirable creamy richness and even added a nice, spicy kick to the dish.

The roasty and perfectly fried golden cauliflower florets were definitely the highlight of the dish, but vegan nacho cheese topping actually elevated the whole thing to make it a truly craveable and memorable creation. This really was one of the most impressive and delicious preparations of cauliflower I’ve ever experienced. And it was completely vegan. 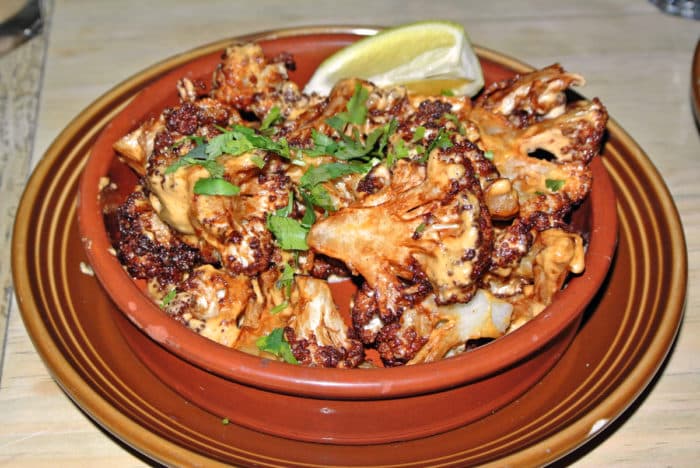 Based on the advice on the internet, Amy went for the Quesadilla de Camote as her main course. Once again, another dish inspired a WTF moment. Huh? A Quesadilla with no queso? How on earth could they pull this one off? As it turned out, it involved another genius use of that spicy vegan cashew nacho cheese used in conjunction with an insane roasted sweet potato and caramelized onion filling. This was all folded into fresh tortillas and was generously topped with vegan crema and toasted pumpkin seeds.

I can certainly understand why a meat-eater might be resistant to a dish like this just from the sound of it, but trust me when I say that this was an extraordinarily delicious creation. There’s clearly a reason why it makes it onto nearly every “best of” list in SF. See: SFWeekly, SFGate, and Foursquare itself among others for proof.

The creamy sweet potato and caramelized onion filling was whipped so incredibly light and creamy and the gorgeous drizzle of bright, spicy, vegetal salsa and white, vegan “crema” added levels of flavor complexity to the whole thing beyond what I had imagined possible. I’m not exaggerating when I say that this quesadilla completely made me forget that there was neither meat nor cheese in this queso-less quesadilla. 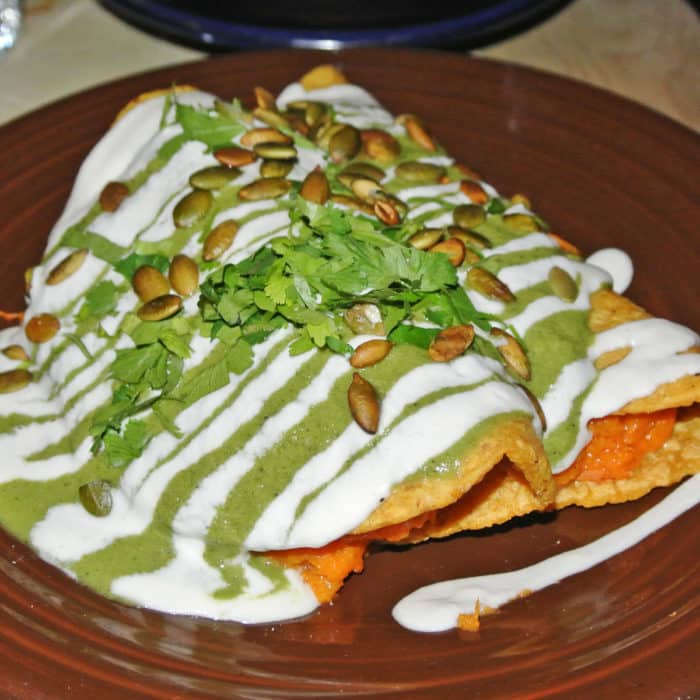 For my main, I was drawn to the Enchiladas con Mole even though I still had my concerns about how they could possibly pull off a chocolate mole sauce without the use of milk. Well, these enchiladas were served open-face with a generous topping of roasted mushrooms, cashew cheese, and plenty of their incredibly delicious reddish (and somehow vegan) mole sauce. The sauce was rich, creamy, smokey, and impressively flavorful. The dish was definitely strong on funky mushroom flavor, so it you’re not a fan of mushrooms, avoid this one, but I absolutely adored it.

The dish also included a bed of sautéed greens (dino kale) which came topped with pepitas and were soaked in a spicy liquid. They really did a nice job of allowing the greens to retain most of their crisp structure and texture and I certainly appreciated that.

But, those black beans. Holy moly. This sort of refried bean/black bean hybrid was extraordinarily delicious. Seriously, these were some of the best beans I’ve ever tasted. My favorite bites of this dish involved getting a big piece of mushroom on a nice wedge-shaped hunk of mole and cashew queso-smothered tortilla and swiping it all through the thick, creamy black bean concoction. This truly is absolutely killer (healthy) (vegan) food. 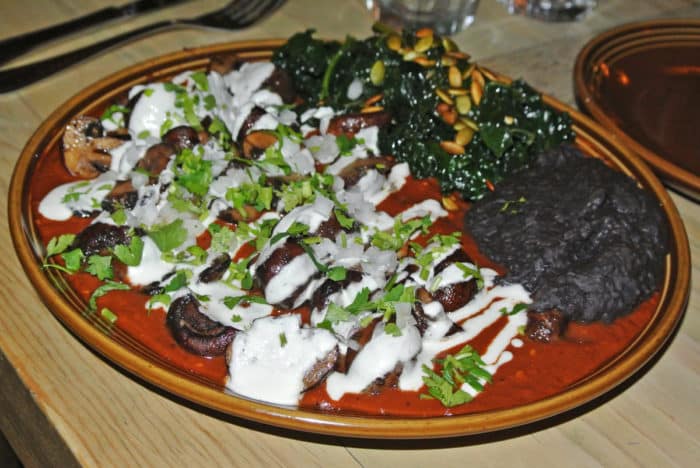 On a (rainy) followup visit, I was drawn to the super-comforting sounding pozole. I’m a huge fan of this hearty southwestern stew, and figured it would be the exact kind of dish a quality Latin American vegan restaurant would be able to knock out of the park. And boy did they.

The portion of spicy, complex, hearty, ancho-chile stew was monstrous and came loaded with large, tender hominy kernels and a veritable fistful of crispy tortilla strips. This is a dish I know I’ll be craving whenever the weather gets rough in San Francisco.

So, despite the resistance and hesitation I’ve had towards eating vegan food for most of my life, this place has further opened my eyes to its merits and possibilities. It has really proven to me how incredibly delicious vegan food can be with careful and ingenious preparation. And though it may never entirely quench my craving for an El Farolito Chorizo Super Burrito, but it can certainly come pretty darn close!

Got another outstanding vegan restaurant in San Francisco that you think I might actually enjoy? Let me know in the comments below.