I always get really excited when new restaurants open, especially when they are close to enough to my home that they can easily become part of my regular dinner rotation. This particular new opening in the Tenderloin was only under a week old, but I couldn’t help but find myself drawn to it. Rusty’s Southern may be in a dicey part of town, but this spacious spot is serving up affordable, California-inspired takes on North and South Carolinan Southern classics. In a town desperately in need of more Southern food, what more could you ask for?

Rusty’s Southern was founded by a big, jovial man named Rusty Olson and his wife Cody. Rusty is the former bar manager of the much-loved Hayes Valley German restaurant, Suppenkuche and the kitchen is helmed by Francis Rubio, formerly of Biergarten, Suppenkuche’s sister restaurant. It seems that Rusty, a born and bred Carolinan was looking to get back to his roots. And he just may be the perfect man for the job to bring a great, new, affordable Southern spot to the Tenderloin.

As I approached the restaurant, I noticed that there was barely any visible signage from the street, though that may change as time goes on and they get more established. Inside, it was a surprisingly large, spacious restaurant. But, it also had a really homey mom and pop vibe. As I entered, I first passed the bar and front seating area. Then, towards the back there was another space for tables followed by a large window overlooking the open kitchen. My eyes were drawn immediately to the window mostly because they had a massive, fresh country ham leg on display getting carved to order.

The walls had white wood moldings and were all painted a pastel blue giving the place a very modern, rustic barnyard appeal. But, even with all of the restaurant’s vast space, it tended to be get noisy in there. The exposed cement ceilings echoed really hard, so the restaurant got loud fast which made table conversation slightly challenging. 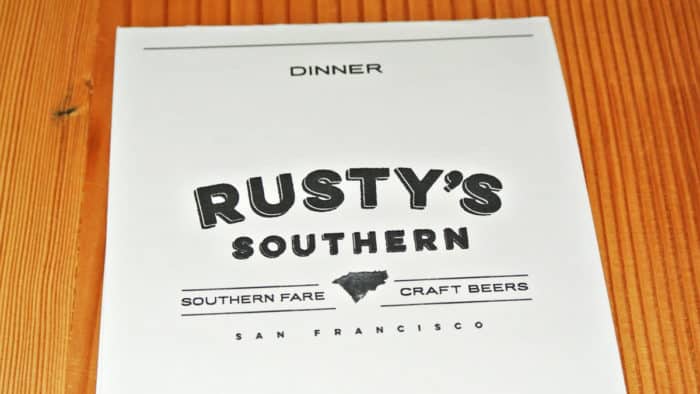 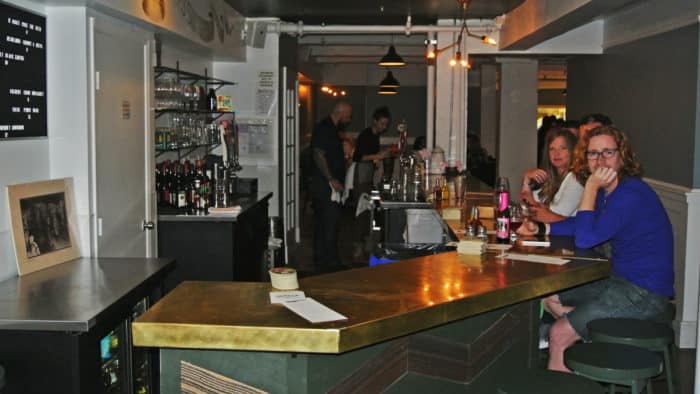 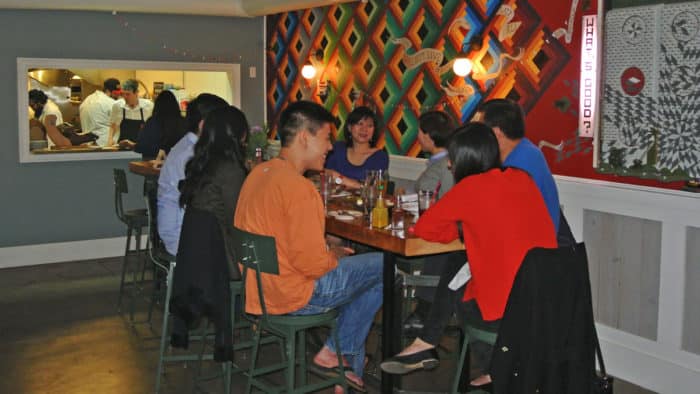 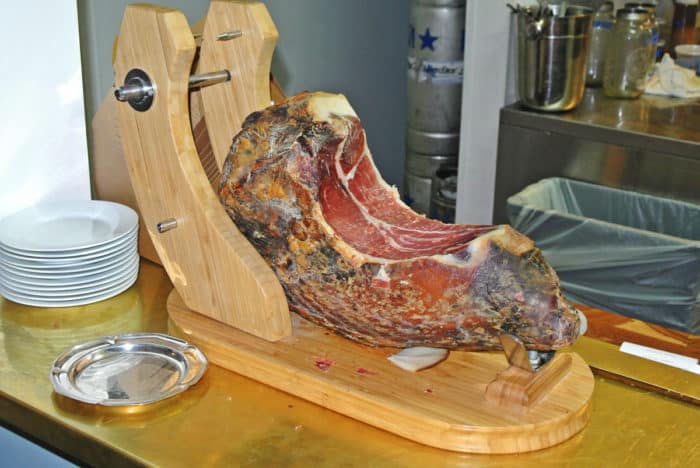 Once we were seated and looking over the menu, a traditional Carolinan bar snack was brought over the to the table for us all to munch on while we decided – Boiled Peanuts. I don’t think I’ve ever had boiled peanuts before, and I really didn’t expect much from them, but they were actually a really interesting and delicious bar snack. The boiling process softened the inner nut and added a nice saltiness to every peanutty bite. I can definitely get down with Southern-style boiled peanuts. 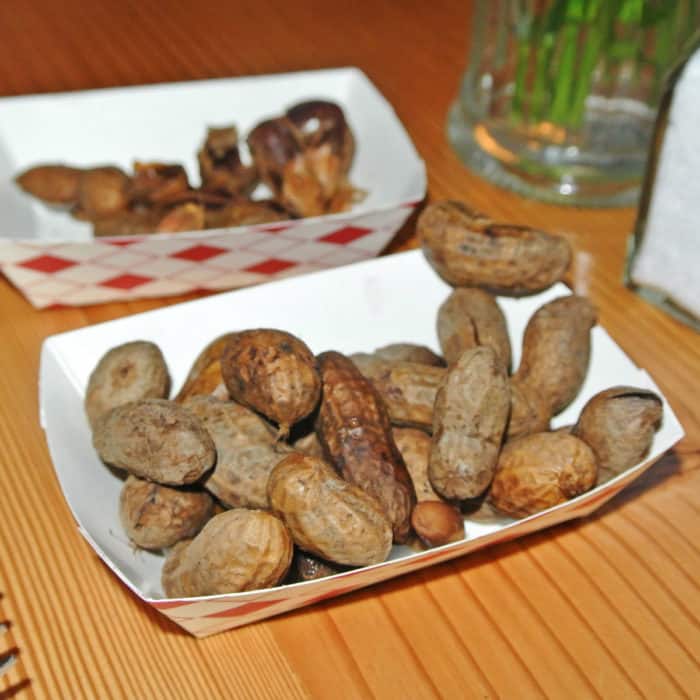 To pair with the salty snack and relatively heavy Southern cuisine ahead, we all took advantage of their beer and wine offerings. They stock a really nice selection of each, so whatever you find yourself in the mood for, I’m they’ll have something that’ll hit the spot. 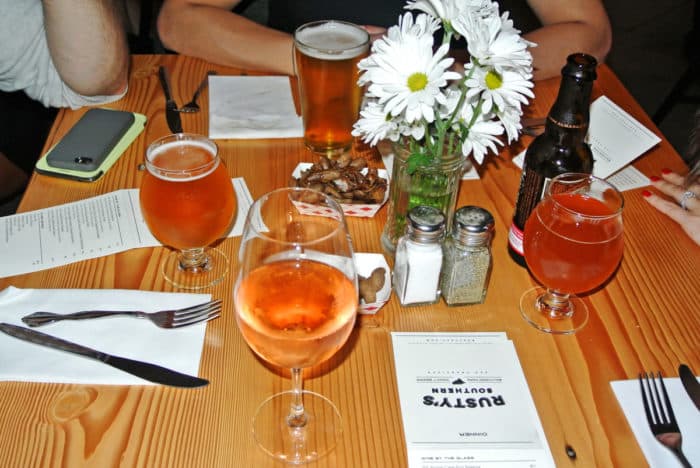 To kick off the meal right, we started with Rusty’s riff on a traditional Fry Basket. A basket usually consists of any variety of things tossed together into a deep fryer – this one involved incredibly well-fried okra, asparagus, and shrimp served with a creamy and spicy remoulade. Instead of a more traditional Southern frying technique, these items were all coated in a light tempura batter – I think a nod to what I presume is chef Francis Rubio’s Japanese heritage.

In any case, I was totally blown away by every element on this dish. Everything was so skillfully lightly fried which allowed all of that gigantic, fresh okra and asparagus to fully shine. You really got to experience the flavorful, vegetal quality of the excellent Californian produce in this preparation. And if I’m being honest, I think this was some of the best fried shrimp I’ve ever had – anywhere. Seriously, they were cooked absolutely perfectly – so snappy, so juicy, so sweet, and so fresh. Rusty, can I get a Po’boy loaded with some of these?? They really did such an excellent job honoring each of the ingredients and that spicy, creamy remoulade paired with everything so well. 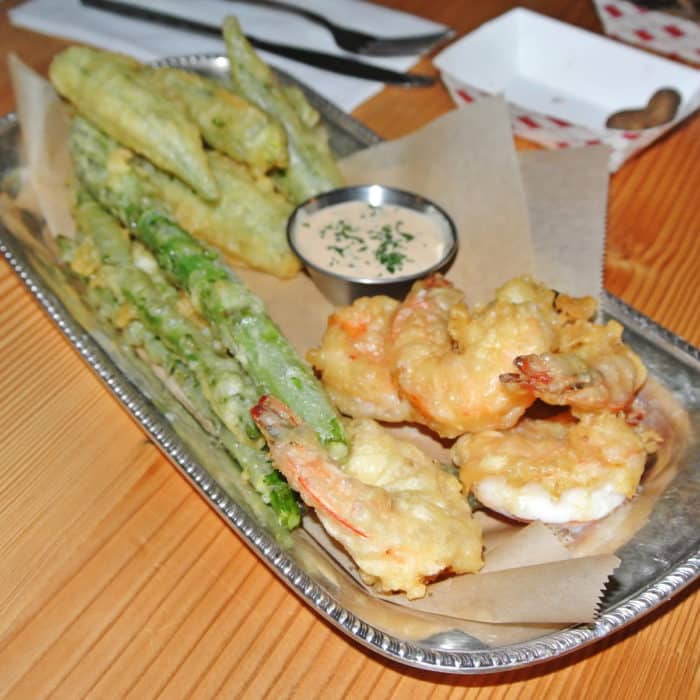 Then it was time to dive into our main courses. I couldn’t resist going for the Barbecue Plate which cost a very reasonable $16.50 despite the fact that I’m spoiled by the best barbecue in the world and generally avoid eating barbecue outside of Texas to avoid disappointment. Fortunately for me, this platter of ‘cue wasn’t trying to emulate the Texan style, but instead was inspired by the Carolinas. It came with a skillet-ful of smoked chopped pork with a side of red slaw and a heap of freshly fried hush puppies. When this plate arrived, the waiter also presented a variety of sauces that included ketchup, Crystals Louisiana hot sauce and to my excitement – a traditional North Carolina vinegar sauce and South Carolina mustard sauce. I was super-amped up to eat the ‘cue, but especially for the opportunity to try a Carolinan mustard mop.

First, the meat. It was impressively moist and tender and was also surprisingly well-spiced. It had a wonderful texture and honestly didn’t need any additional flavor from sauce, but that didn’t stop me from experimenting with each. I applied both Carolinan sauces to the meat and found myself instantly in love with the kickin’ South Carolina mustard sauce, though the spicy brown vinegar sauce was really wonderful as well. I <3 South Carolina mustard sauce>the hush puppies didn’t do it for me. They just tasted like fried dough – more like a dense, unseasoned, savory zeppole than any sweet, chunky, corn-filled cornmeal fritter I’ve ever had before. I didn’t bother to finish the hush puppies since there was so much other good food on the table more worthy of my belly space. 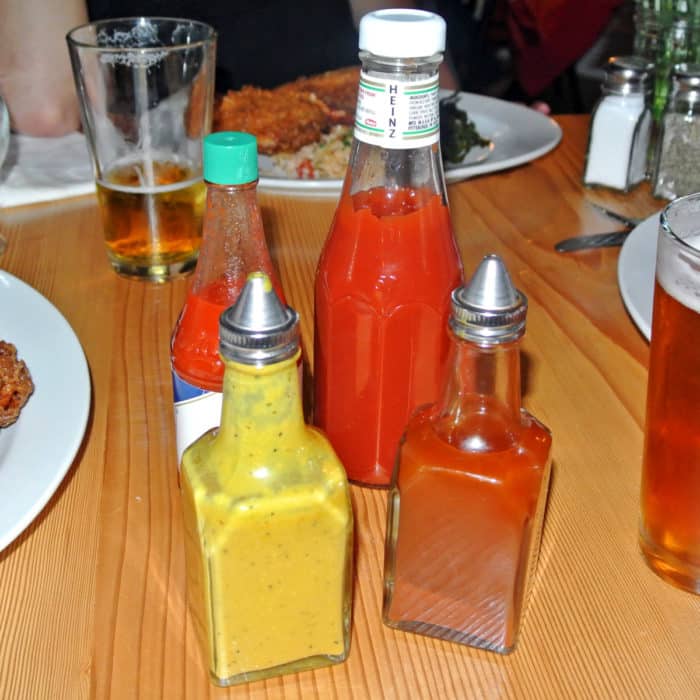 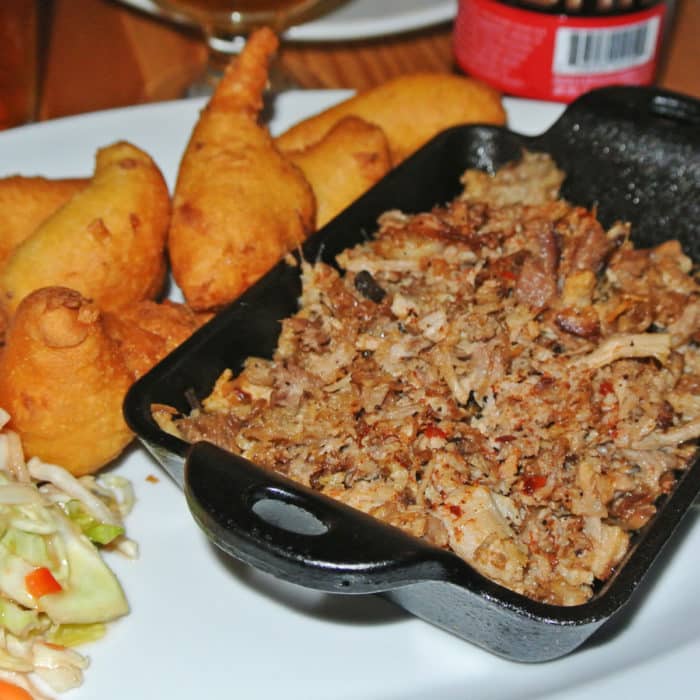 Amy’s Catfish, for instance, was another really tasty dish I was able to experience and enjoy. The fish was lightly dusty in cornmeal, giving it a delicate thin crust that allowed the flaky, white fish to shine. I know this method highlights the quality fish, but I almost can’t help but prefer it a more heavily dredged and deep-fried version I regularly have in Amy’s Texas hometown.

Along side the fish was a trio of cabbage, chow chow (pickled veggie relish), and a smoked lima puree. All of the sides were tasty, but that smoked lima puree was unbelievable and unlike anything I’d ever had before. It was almost confusing trying to make sense of what it was – in the best way possible. For a moment, I thought it was bacon-studded mashed potatoes, but then was surprised and impressed to learn that the smokey, creamy puree contained neither pork nor starchy potato. Truly amazing – I’d love to make some for myself at home, but I think I’ll just return to Rusty’s for some more instead. 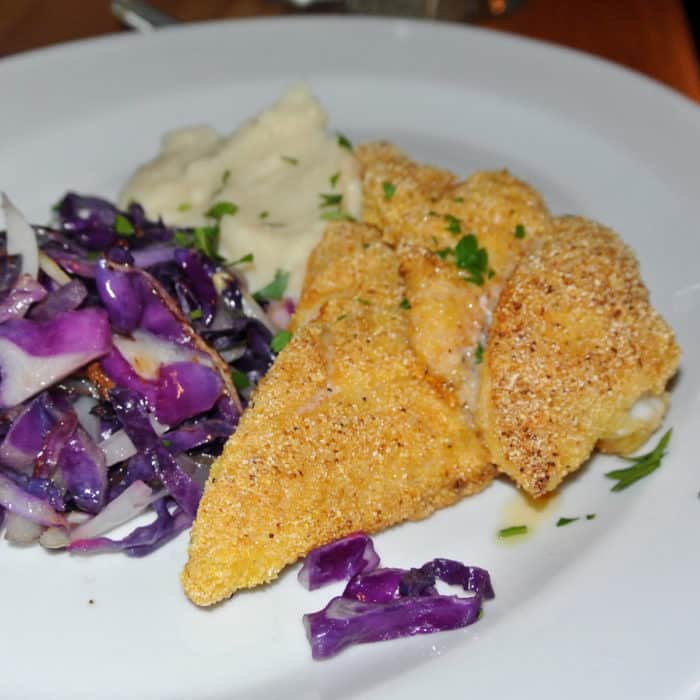 And then there was that Fried Chicken. Oh man, that fried chicken. That was something else. These breasts and thighs were big, meaty, and incredibly moist. Apparently, they use an old Southern trick to keep the meat so juicy – they debone the chicken and brine it in sweet tea before frying. Beyond the ridiculous level of moisture, the pieces also had a nice crispy crust, but just like the other dishes, it was concocted to really highlight the wonderful meat instead of hiding it beneath a big, crispy, oily crust. This dish actually made me enjoy white meat – that’s a damned miracle! This dish was really good on its own, but shaking on some of those flavorful, vinegary sauces made it even better.

In addition to the meat, the plate came with okra perlou (a sort of rice jambalaya) and braised collards. Unfortunately, I found the collards were sort of flavorless and uninteresting. I think they lacked seasoning and any discernible flavor outside of the green itself. But, no worries – that incredible chicken more than made up for the unexciting collard side. 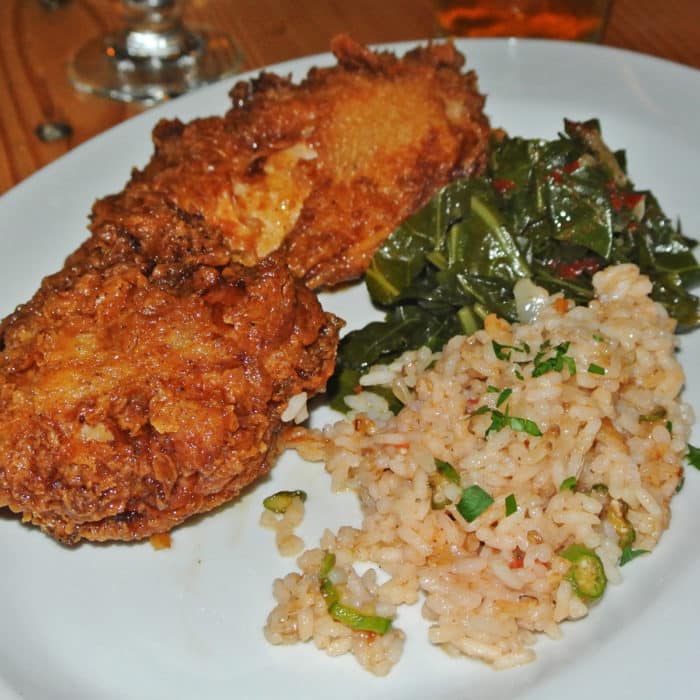 And of course, along with our Southern classic entree, we had to get another classic as a side – Baked Mac and Cheese. Rusty’s offers two varieties of mac – one with a crackling crust and another with a kale crust. I bet you know which one I was excited to try, but since we were dining with a non-pork eater, we ordered one of each for comparison.

Though, the crackling topping definitely sounded better, I think I preferred the kale-topped one more. Blasphemy, I know. Let me explain. The cracklings were fried nicely and actually were quite delicious, but it was almost like eating mac and cheese plus eating some cracklings on top. On the other hand, the crispy kale texture and flavor integrated seamlessly into the cheesy noodles giving a nice vegetal balance to the super rich dish. Yes, kale beat cracklings. 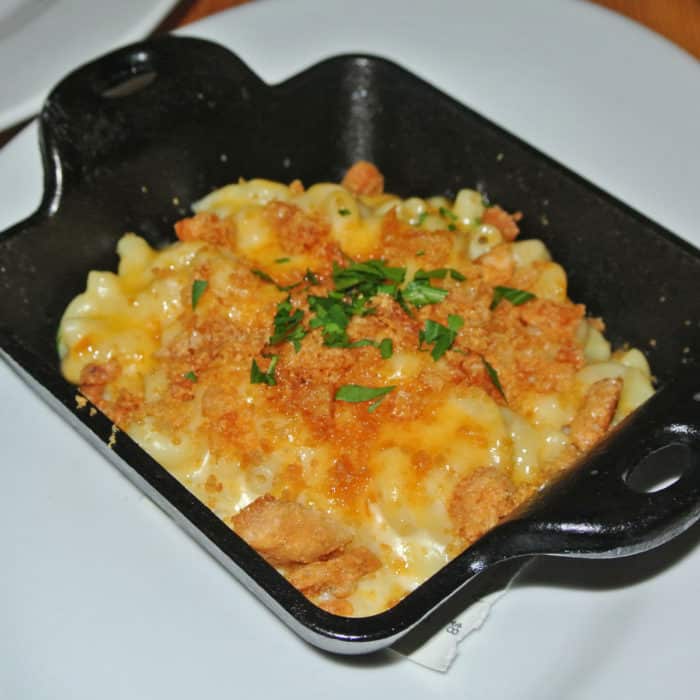 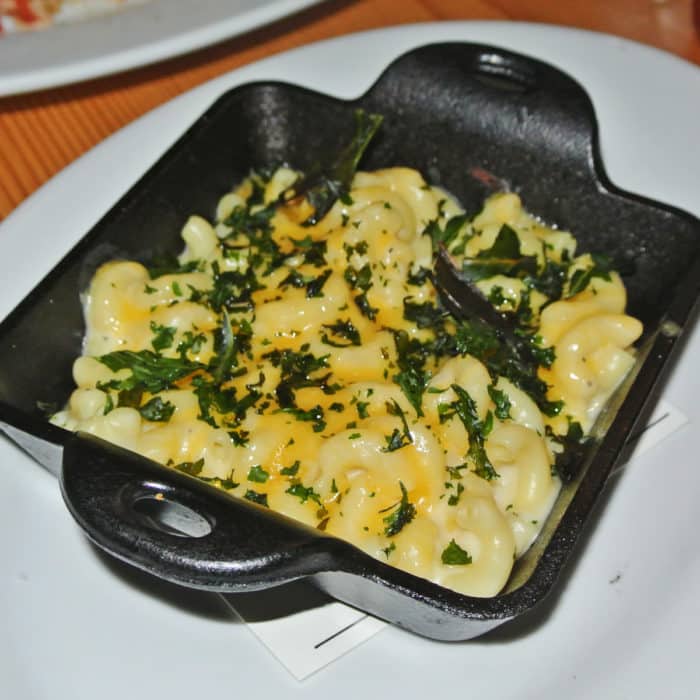 And let’s not forget about dessert. We selected two dishes between the four of us and started with the irresistible Buttermilk Pie. This was absolutely extraordinary. The piece was massive and it looked hefty as hell yet it somehow feel and tasty surprisingly light and fresh. It actually sort of reminded us all of raw lemon cookie batter as we ate it.

The crisped top and dollop of fresh whipped cream was a nice touch, but that flaky, buttery crust was truly insane and brought this dish over the top. Without a doubt, I could totally eat an entire Buttermilk Pie by myself in a single sitting – not that anyone in their right might should.

And then our other dessert – Bread Pudding. This was another outstanding dessert, though I think I may have fallen harder for the first one. This dish had a spongey texture that was completed soaked through with delicious, moist, milky flavor and the fresh fruit topping was a nice touch to add some brightness and balance. This dessert really was wonderful with its almost flan-like consistency with crispy caramelized bits on the outer edges – definitely another triumph for Rusty’s. 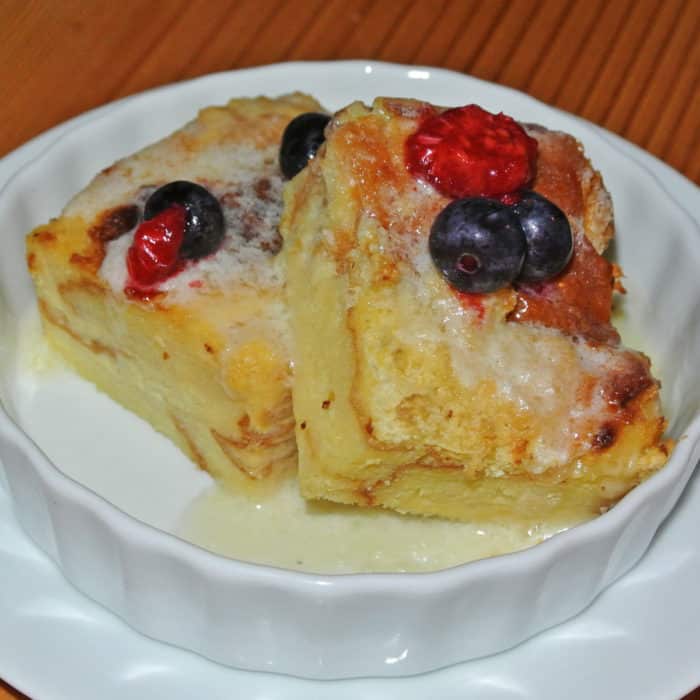 Fortunately, I don’t think anything at Rusty’s has been overly California-fied. All of the traditional flavors are there, they just do a outstanding job honoring the core ingredients with little twists along the way while allowing the high quality California meat and produce to shine. Their beer and wine selection is more than adequate to keep any beer or wine snob happy and all of the prices are very reasonable making this a great, new spot for a unique, fun date night in the ‘Loin. I’ll be back – frequently, I bet.

Got another amazing Southern spot in SF I should check out? Let me know in the comments below.