Every month or so, we like to head south of San Francisco down to Monterey. For us, it’s a nice way to take a mini-vacation and because it’s a beautiful place within driving distance and we have family there to crash with. We’ve done a variety of food exploration in the area on our own, but as is usually the case, a recommendation by a local resident usually holds more weight than what I can uncover. In our hosts’ opinion, Montrio Bistro is one of the best restaurants in all of Monterey and it happened to only be a five minute walk from their downtown home.

The restaurant is located right on the main drag of town and even though we had headed over quite late on a late Sunday night, it still wasn’t easy to grab a table for four. Quick on my feet, I pulled up OpenTable at exactly 8:48 PM and successfully nabbed a table for us all at 9:00 PM. Bam, that did the trick. Only a few minutes later, my name was called and we were seated in the surprisingly bustling restaurant.

It was quite a large restaurant and it – how do I say this – had interesting decor choices and aesthetics that I think were a little over the top. It was canvased with ironclad grapevine motifs and was accented by faux-aged walls produced with a tan, sponge-painted effect. I know this is going to come off sounding negative, but to me it looked kind of like an Italian Cheesecake Factory. Or maybe it was reminiscent of an Italian Disneyland… like, I get what they’re going for but they were so blunt about their design choices that it almost felt a little too try-hard. 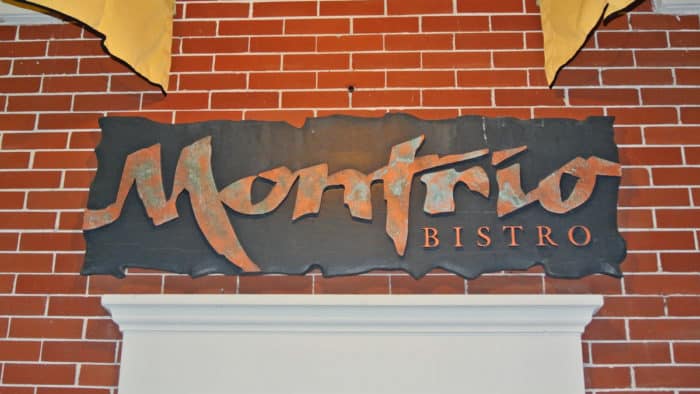 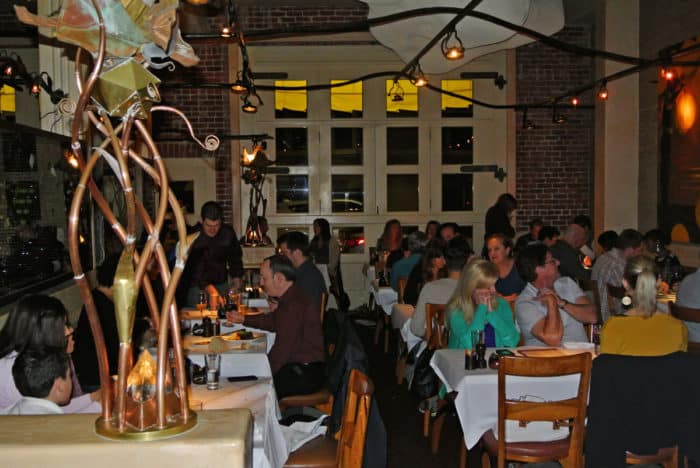 But, for a moment, let’s forget about the decor of the restaurant. We were there to eat after all.

Since we were at Montrio with some local regulars, they had a good sense of what dishes people get most excited about and steered us towards trying them. One dish in particular that apparently incites more hype than any other is a starter simply called Chicken Waffle, we had to get it. A dish with that sort of name brought out fond memories and drew pictures in my head of Harlem’s best Fried Chicken & Waffles, but that’s not exactly what this dish ended up being quite like.

This bowl came out with a craggy, bacon-studded square waffle topped with wilted kale and a sunnyside egg. Then, as soon as the bowl was dropped in front of us, our waiter poured a pool of chicken jus from a tiny white pitcher around and over the whole thing. Even as the chicken jus began to soak into the waffle and the egg yolk ran over the thing, I was still curious where the “chicken” in the name would be.

Then it dawned on me. The chicken element in the name was based solely on the deep, dense, dank chicken broth that was poured over top – not any kind of fried chicken topping as I kind of expected and had hoped for. Don’t get me wrong, the jus imparted a bold and deeply chickeny flavor to the dish, I just figured there might be chicken somewhere inside or on top too.

The waffle was OK, but even with the bits of bacon build right into the batter it wasn’t an outstanding waffle. I’m not sure it had the right texture and I think it may have been cooked too far in advance. But, on the whole the flavors in this dish were awesome. To me, it tasted kind of like the entire Fall season summed up in a single bowl – it was straight up comforting, it was just a lot different than the dish I had thought it would be. 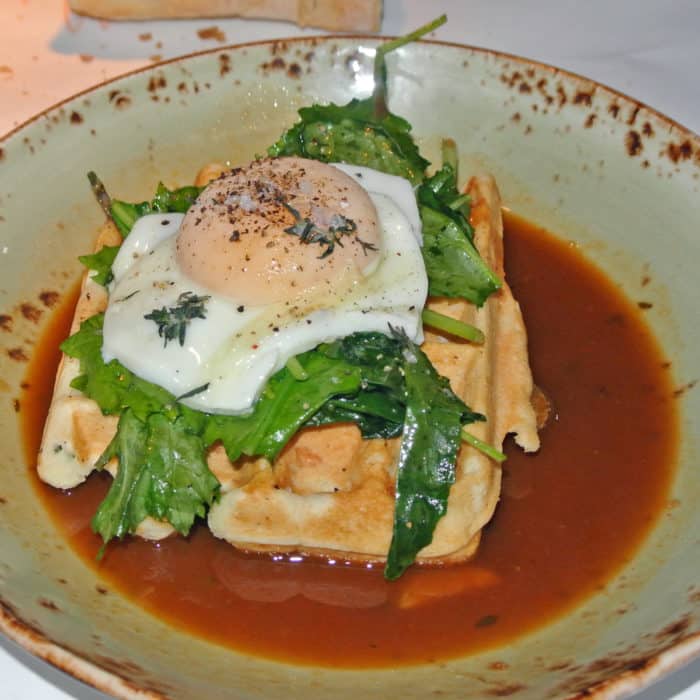 Another starter we split was called Butternut Squash & Burrata. While it perhaps sounds overly simple, it tasted anything but that. This dish included a whole mess of great, fresh, milky, well-seasoned, white burrata cheese mixed in with cubes of butternut squash, candied hazelnuts, and a fistful of arugula dressed in a sherry vinaigrette.

The butternut squash was cooked quite well – tender, but not overcooked and mushy. It and the burrata paired very well with the peppery, earthy arugula, deliciously crunchy and sweet toasted hazelnuts and bright sherry dressing. For so many disparate and contrasting elements, the whole dish came together incredibly well. 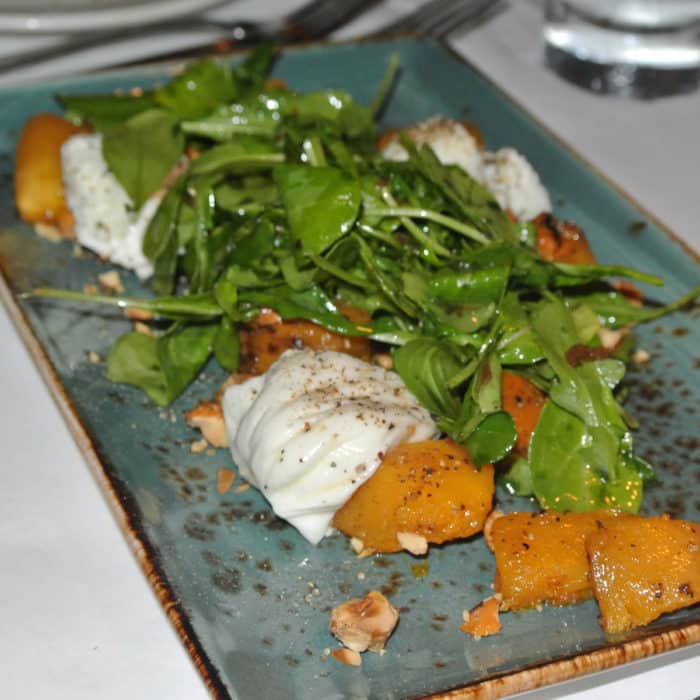 And finally, for our main course, we looked towards the healthier sounding options and found ourselves drawn to the Grilled Verlasso Salmon. Apparently, Verlasso is a Patagonian farm that provides sustainably farmed salmon that fits the restaurant’s ethos of using responsibly sourced ingredients (just like Tataki and Cindy’s). That’s nice and all, but I don’t really care where the salmon came from as long as it’s delicious and the fish in this dish was truly spectacular.

I honestly didn’t think this dish was gonna be as good as it was – I think the menu may have undersold this one. The sustainably sourced salmon was cooked particularly well, but it was the saucing, seasoning, and bed of salty, cheesy risotto that really elevated this dish to drool-worthy status. The citrus mascarpone risotto was so incredibly rich and cheesy – I loved every bite. And the sprinkling of fried Brussels sprout leaves added such a nice vegetal quality and crispiness to the dish, but really that sauce that was smothered all other the entire surface of the fish was insane – I’ve never had anything quite like it.

Before this meal, I had never even heard of a baked tomato nduja sauce, but now I know I need a whole lot more of it in my life. A bit of quick internet education has taught me that it’s – get this – a Calabrian spicy pork sausage spread. The name nduja apparently loosely translates from a Latin word meaning “meat from the head” – so I’m betting you know what’s coming next. It’s actually made from all of the awesome, miscellaneous pork parts I love including shoulder, belly, jowl, tripe, and god knows what else – all together with a mixture of spices and roasted hot red peppers. This spread completely exemplifies the combination of insanity and genius that I love in my food.

Ultimately, this stuff tasted a lot like a French Andouille sausage, except it can be purchased in spreadable salami form and can be applied to just about anything. Now, I’ve fallen completely in love with this stuff – I just adored how well it worked with all of the elements of the dish, but especially the farm fresh fish. 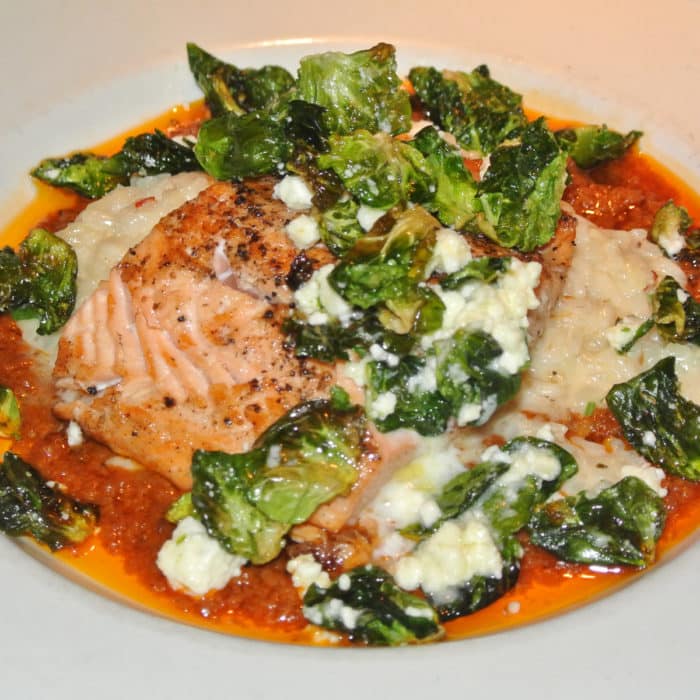 So, if you’re looking for a great dinner spot in Monterey, I’d highly recommend grabbing a reservation at Montrio Bistro if you can. Everything we had was delicious, but that Grilled Verlasso Salmon so was ridiculously good, I almost can’t even comprehend it. You don’t want to miss that dish, though I’m sure there’s plenty more to love at this excellent date-night spot in Monterey.

Got another great dinner spot in Monterey that I should check out next time I’m in town? Let me know in the comments below.

For the Best Sushi in Silicon Valley, get Omakase at Sushi Tomi