Back when I was living in New York, I think I took for granted the fact that it really was “the city that never sleeps”. Literally any hour of the day, I could get my hands on anything I craved. Bars stayed open to 4, delivery services ran around the clock and worked lightening fast, and there was always a restaurant open serving exactly what I was in the mood for, no matter what crazy hour it was that I wanted it.

Now, let’s compare that to San Francisco, where bars start winding down at 1 AM and close at 2. It’s a place where most restaurant and bar kitchens close around 10 PM and food delivery is an utter joke. If it’s past 10 PM and you feel like having a great late night meal, you’ve got to approach the situation with a little more care and a lot more knowledge.

On this particular day, it was around 11:30 PM and Amy and I had already gone for a few rounds of cocktails around town. We were in need of a great late meal to serve as an end-cap to the night. As you may have noticed, Amy and I have been eating quite a lot of sushi around San Francisco because, well, it’s so freaking good out here, but there was one place I was holding in my back pocket for the right occasion. This place, called Ryoko’s, is located on a side street on the cusp of Union Square and Lower Nob Hill and is very well known among service industry folk. Ryoko’s stays open until 2 AM and keeps pumping out impressively high quality late night bites until their doors finally close. For the many food and hospitality workers in Union Square, it’s become a bit of late night safe haven after their late-night shifts have concluded.

Ryoko’s is located down a flight of stairs in an underground basement-type space. Due to its late-night hours, the crowds it draws, and its relatively proximity to the Tenderloin, it even has a full-time bouncer seated at the top of the stairs granting or denying access to the place. During prime dinner hours, it gets really busy, but when we showed up, we were able to be seated almost immediately. Once you descend the stairs into the subterranean space, all of the sushi chefs will excitedly shout in Japanese to welcome and greet you in. It’s got a sort of high energy night club vibe with it’s dark decor accented by loud, clubby jams spun by an actual live DJ throughout the night. It’s an unusual vibe for sure, but when you want sushi late at night in San Francisco, there’s no better place to be. 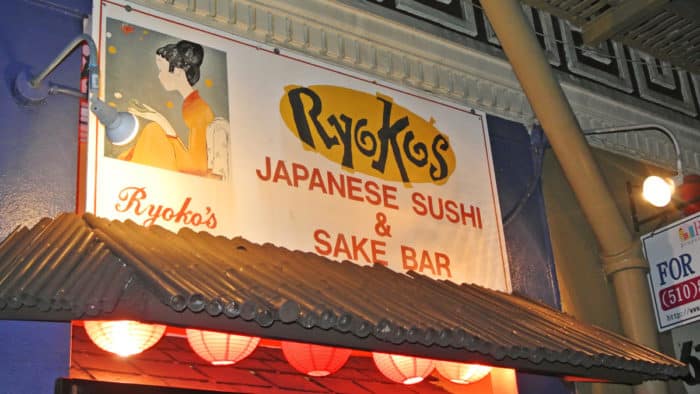 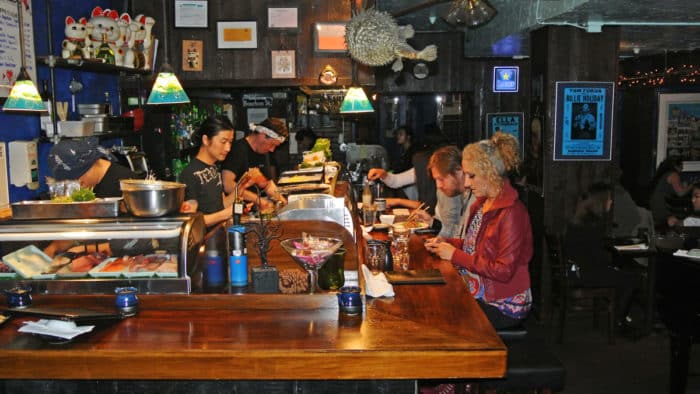 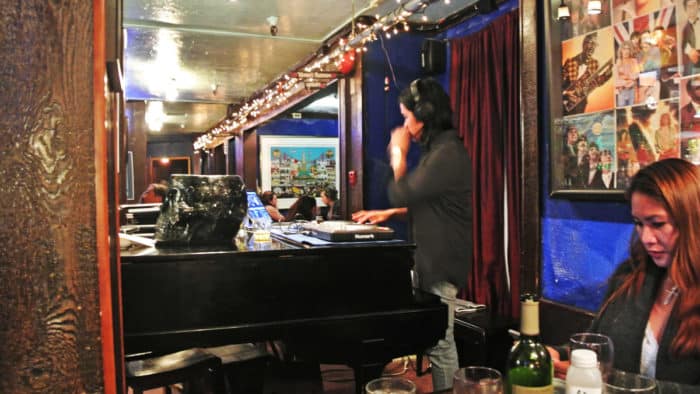 And you know what, there’s just something about starting a sushi meal off with a hot, steaming bowl of miso soup that just feels right. This one was especially comforting and soothing after a night full of cocktails. It was particularly delicious and unique with its distinctly smokey flavor profile. I’m not exactly sure what imparted such a smokey flavor to the broth, but it was wonderful, rich, and satisfying right down to the last drop. 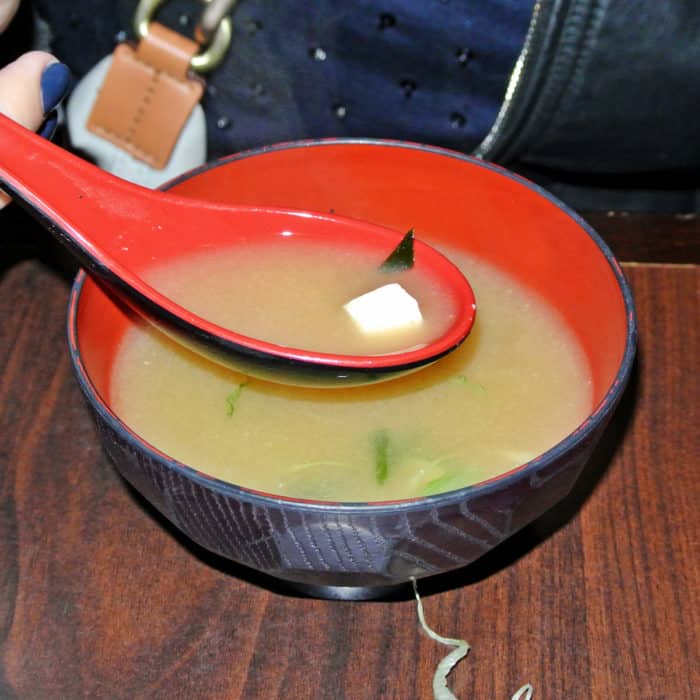 For this meal, in order to sample a wide variety of their offerings, we ended up ordering a few different types of nigiri along with some specialty rolls completely unique to Ryoko’s. I pulled up Foursquare and followed one particular suggestion left by many other food lovers despite the fact that their recommended roll, called a Volcano Roll, sounded nothing short of bizarre. This roll was made with deep fried tempura shrimp, cucumber, flying fish roe – and are you ready for this – jalapeño and peanut butter. I don’t know what kind of hallucinogens the chef was on when concocting this one, but I can attest to the fact that this combination actually worked remarkably well.

The roll was quite spicy. There were many enormous fresh jalapeño hunks throughout, but there was also a subtle creamy, nuttiness imparted by the peanut butter that managed to contrast nicely with and cool the jalapeño heat. Inside, there was a very nicely fried tempura shrimp – another ingredient that doesn’t sound like it should work with the others, yet somehow it all did work – really well. You might just have to take my word for it with this one or get over there to try it for yourself truly to believe it.

The Sakepper Roll was also really nice and came highly recommended by Foursquare tippers. This fusiony creation was made with the interesting combination of salmon, shiso leaf, and here’s the twist – capers. I really loved how the green, vegetal, herbal shiso leaf and salty, briny, caper flavors played with the buttery and insanely tender, fresh, raw salmon. This was another really interesting unique creation that may have sounded gross, but was actually done really well. I’d get it again. 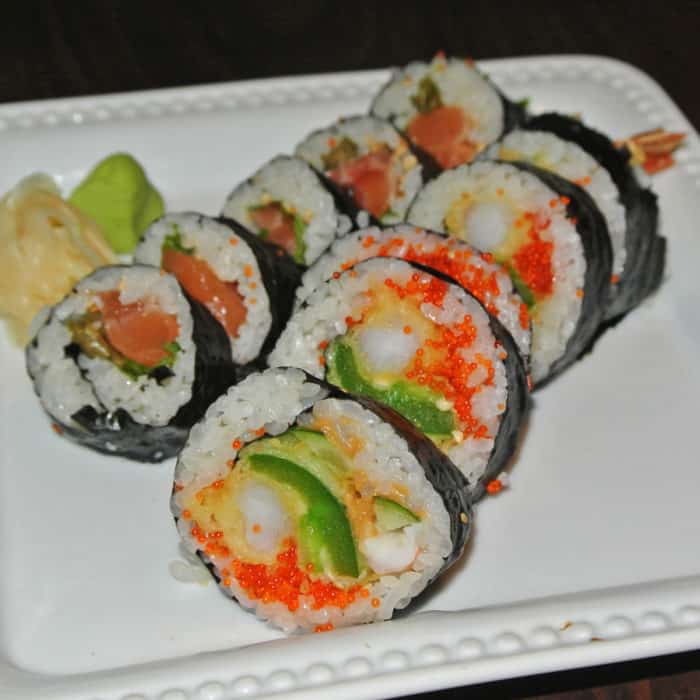 So, we already knew from the Sakepper Roll that the salmon at Ryoko’s was really good, but our next plate – full of simple, traditional Salmon Nigiri pieces – cemented that understanding. The fish really was incredibly fresh, though if I was being particular, I’d gripe that the nigiri pieces were smaller than what I’ve found at most sushi joints around SF. 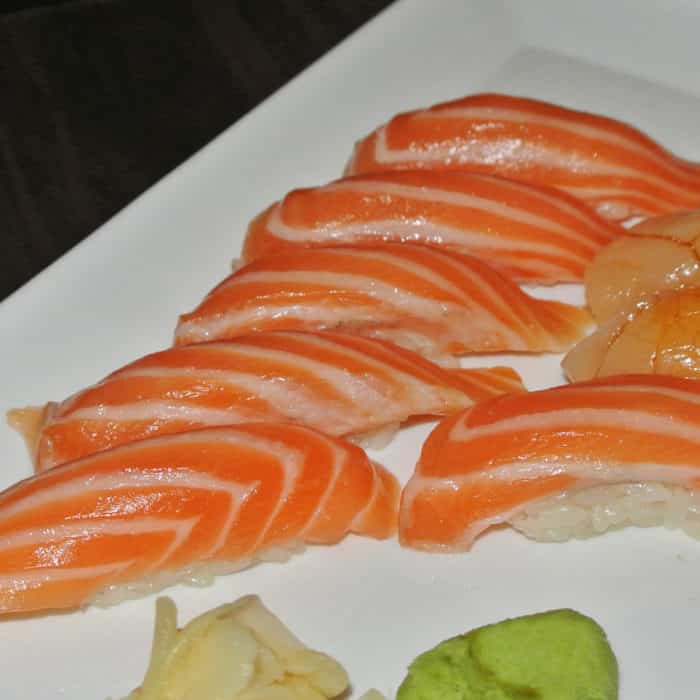 From there, I ventured back into more adventurous territory. Like most of the best sushi spots in SF, Ryoko’s features many imports flown in directly from Japan’s famed Tsukiji Fish Market. These special pieces obviously come at a premium, but it’s often where you’ll find the most interesting cuts of fish for nigiri or sashimi.

I spotted a few unfamiliar names on the menu, so I asked my waitress for more info on a few of them. Apparently, Awabi is the Japanese word for Abalone. Now, I don’t think I’d never tasted abalone before, but I knew this historically pricy luxury food item was something I had to order. I requested a pair of Awabi Nigiri, but at this late point in the evening, they only had enough Awabi left to make a single piece of nigiri so she suggested I get another Japanese import piece as a substitute.

For those unfamiliar with abalone, it’s basically a weird, gigantic type of white sea snail primarily obtained through a very labor intensive deep sea diving technique to pluck them from the ocean floor. And I know that giant white snail sushi probably doesn’t sound very appealing to most, but I just couldn’t resist the opportunity to taste something new.

Well, as it turns out, I didn’t really love this sea creature. It was really firm, kind of chewy, and strangely was shockingly crunchy with every bite. It was kind of like chewing through a firm, snappy, uncooked carrot with that distinct crackly crunchy feeling you get when your teeth break through the raw vegetable. The flavor wasn’t particular interesting either, I pretty much only tasted the soy and wasabi the chef pre-applied. Again, I’ve never had abalone in any treatment before, but if this is what it’s like everywhere in every preparation, I don’t think it’s necessarily something I’d seek out another time. I was definitely glad they only had a single portion left of it so that I had the opportunity to try a different Japanese import instead of doubling down on the one I didn’t really enjoy. 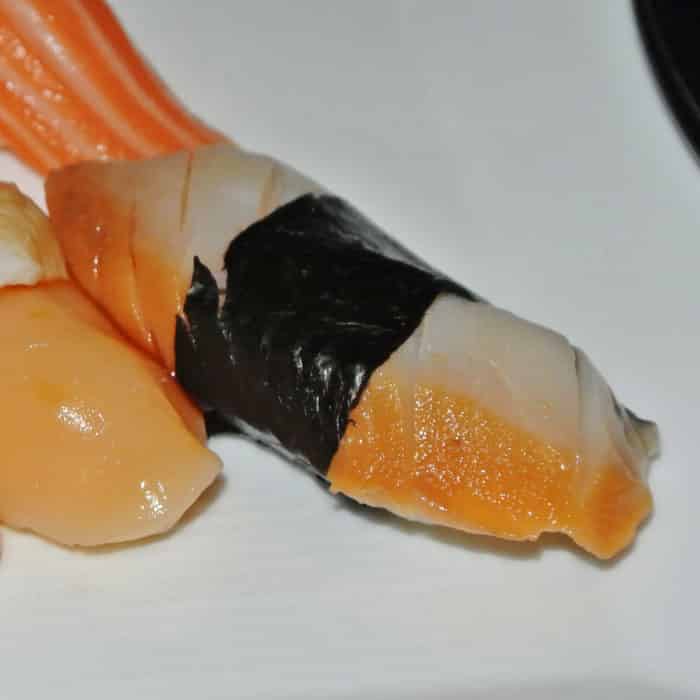 The alternate piece I went for was Hokkigai Nigiri which was made with imported Japanese surf clam. This, on the other hand, was outstanding. It had the kind of chewy texture that I actually do appreciate – slightly toothsome, but not overly or unpleasantly chewy. The irregularly shaped pointy red clam tongue (foot? both?) definitely had a noticeable oceany quality to it – a sort of sea air essence – and it was definitely firmer than most fish used for nigiri. But, there was also a distinct tenderness to the enjoyably chewy bite. Just like the awabi, this piece arrived well-dressed in soy and wasabi so that no extra dipping was required. 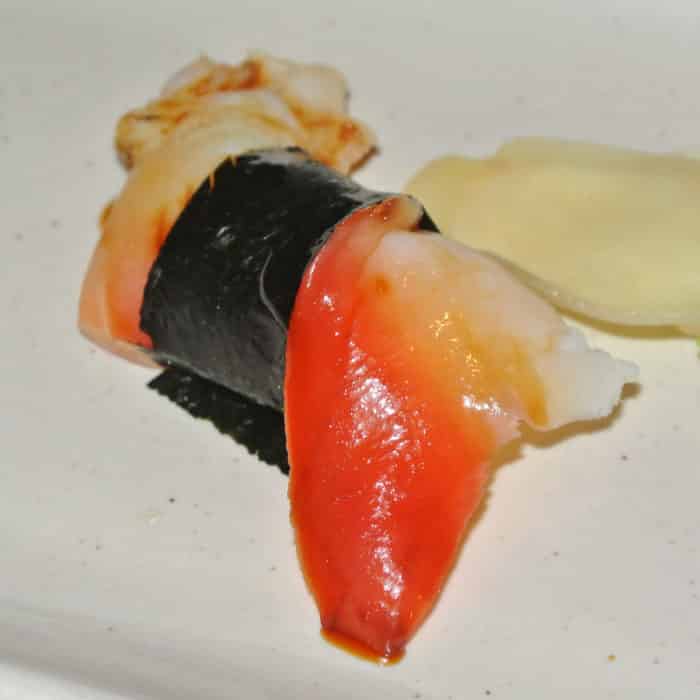 To close out my meal, I saved a few pieces that I knew for sure that I’d love. I’ve honestly become rather obsessed with eating raw scallops in the form of Hotate Nigiri recently so that was the move here. Just like I had noted about the salmon nigiri, these hotate nigiri were on the petite side compared to other Bay Area versions I’ve had recently, but they were absolutely wonderful. They exerted a really nice, natural sweetness and oceany freshness along with incredibly tender texture which was enhanced by the chef’s delicate application of soy and wasabi to each piece. 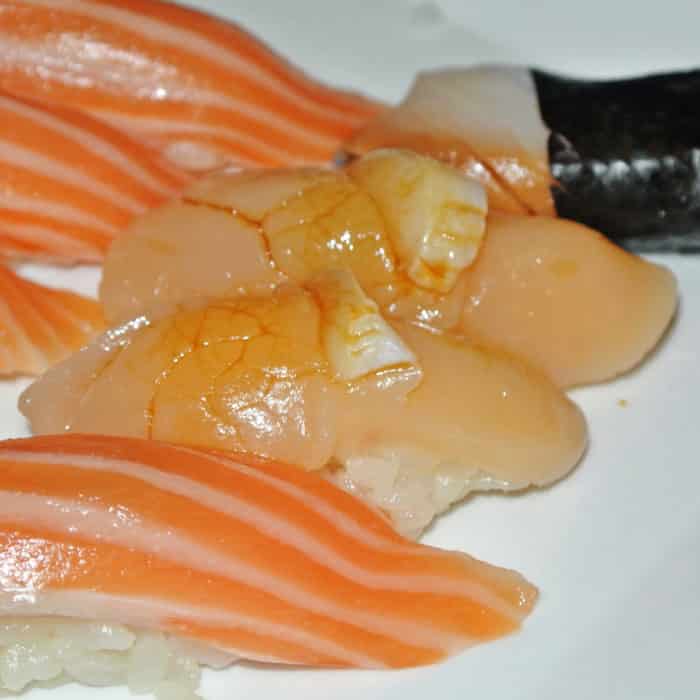 So, if you’re ever in a bind looking for a late night meal in SF and the craving for sushi strikes, Ryoko’s is the place to go. Though it’s generally regarded a place for industry folk to head to after finishing a late-night shift, they welcome non-industry types as well with open arms. It’s not the cheapest sushi you’ll find around, but it’s also not terribly expensive either. I think it does a great job hitting that perfect sweet spot of quality and price that I constantly seek out.

Got another great late-night eatery in San Francisco that I should check out? Let me know in the comments below.