In general, the Inner Richmond is known for its vast array of authentic Asian restaurants. It’s certainly not thought of as an opportune place to be able to get Mexican food, but there I was on a Sunday afternoon doing exactly that.

After a stop by the Presidio for Off The Grid’s Picnic at the Presidio to find ridiculously large crowds and excessive lines at every food vendor, I hopped onto Foursquare in search of a lunch alternative. Sure, mostly Asian food dominated the search results, but there was still a single listing that differed completely from everything else called La Ciudad de Mexico that caught my eye. San Francisco is definitely a town known it’s Mission style burritos, and there are plenty of great options for those around, but there is another traditional, handheld Mexican street food that La Ciudad de Mexico specializes in that tends not to get as much love – the torta.

Before driving over to La Ciudad de Mexico, finding street parking, and walking up to the place, I had no idea how small it was actually going to be. I though that perhaps it would have a table or two. Or maybe even just a ledge to lean on while you eat, but no such luck. It’s basically a doorway that leads to a closet sized kitchen that houses a soda fridge, a register, and two Mexican men whipping up giant, cheap tortas.

Sure they offer dishes other than tortas, but after reading through Foursquare tips and glancing at the menu hanging overhead, Amy and I honed in on our choices – tortas, obviously. She went for the Al Pastor Torta in the small size (hint: it’s not small) and I selected the Carnitas Torta in large for about two bucks more. We paid and exited the microscopic shop to allow other patrons to place their orders and a few minutes later we had our tortas in hand. With no place to consume them inside the shop, we ambled over to a large park bench at a bus stop on the busy street nearby. Not ideal, but at least we were eating outside in the sun. 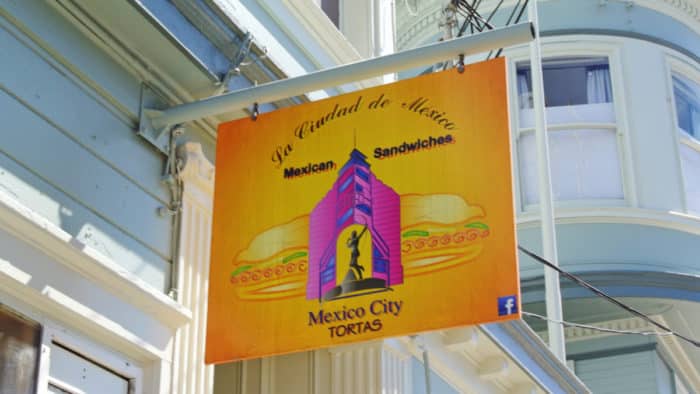 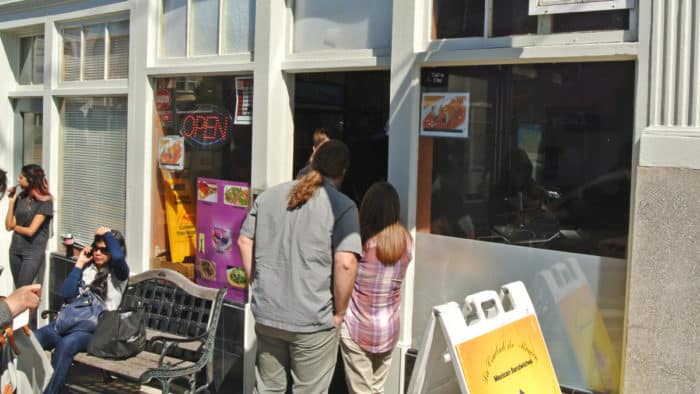 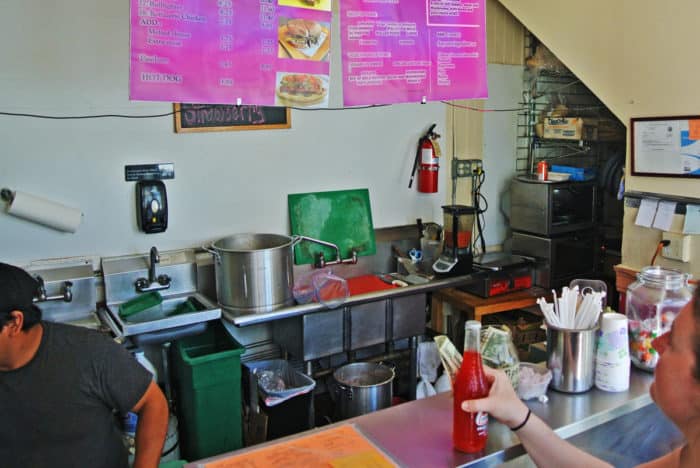 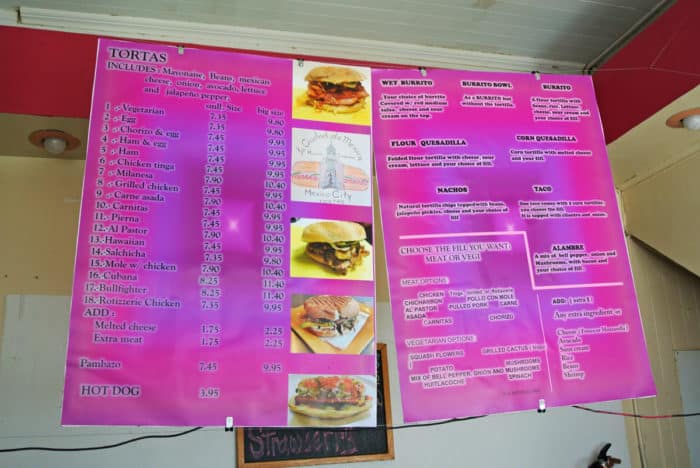 Both tortas were filled quite generously with our choice of meat along with the array of standard torta fillings that included a swipe of mayonnaise, beans, sliced queso fresco, onion, sliced avocado, lettuce, and large rings of jalapeño. The bread was relatively flat and thin, but it was still fluffy and had a powdery softness that somehow, even when sliced in half, was able to contain the mess of ingredients.

Amy’s Al Pastor filling glowed a gorgeous red-orange hue which permeated deep into the inner portions of the juicy hunks of pork. The orange grease seeped into the surrounding bread, integrating itself with the whole sandwich, but the torta bread actually did do quite a nice job holding up to all of the moist, meaty fillings. The flavors in this sandwich were quite delicious and the small size was more than sufficient for any person with a normal sized appetite. 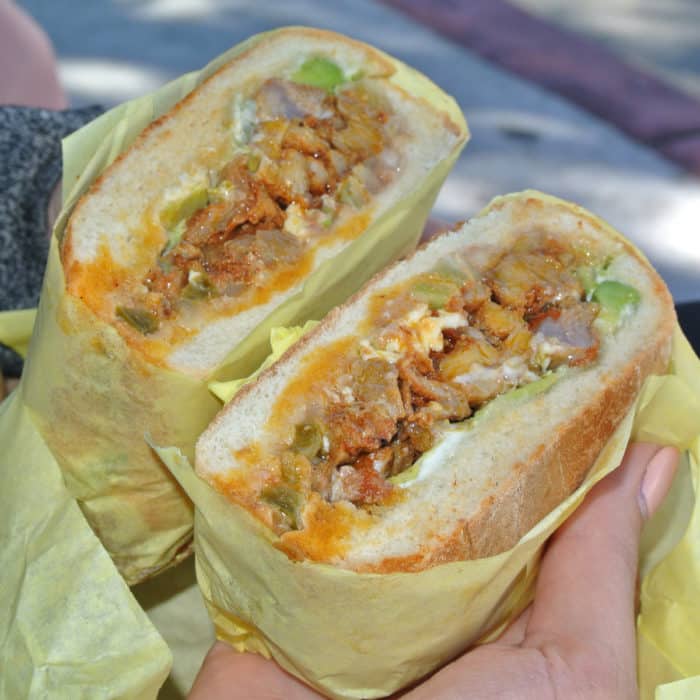 My large Carnitas Torta was another story. That thing was massive. It was thin enough to bite into with ease, but it was enormous. It certainly wasn’t so big that I couldn’t finish the whole thing in a single sitting, but it was definitely big enough to make me feel very very full by the end of it.

The shredded meat was cooked very well – it remained nice and moist and tender, but it was definitely not as flavorful as the Al Pastor. This was a very tasty sandwich, but it was definitely on the mild side flavor wise for my taste. To kick it up a notch, I generously applied the aggressively spicy deep red hot sauce they supplied with the sandwich. That really added a burst excitement to the thing. If you don’t love spice though, it would have been just fine as is.

In conclusion, these sandwiches were pretty darn good especially for a unique, cheap, non-Asian grab-and-go meal in the Inner Richmond. I probably wouldn’t trek too far out of my way to get them, but if you’re in the area and don’t feel like having Asian food, this would be a great alternative.

Got another great SF hole-in-the-wall that I should check out? Let me know in the comments below.