It’s all in the water – or so they say. Continuing on our quest to find real, authentic New York style bagels in San Francisco, we ventured with our ex-New Yorker friends to the Inner Richmond to give their recommended spot called House of Bagels a shot. Despite the place’s personal recommendation, I still approached the trip cautiously due to BuzzFeed’s SF bagel blog tongue lashing.

This place was a pretty substantial trek from our Polk Street home and without a car it would be next to impossible to get to. In fact, the distance alone probably makes it a bit too much of a hassle to regularly go to especially with the completely passable bagel joint The Bagelry a six block walk away. Hell, even if you’ve got a car, street parking in that part of the city is nearly impossible to come by. But, if this was the by some miracle the Bay Area bagel holy grail I had been searching for, I’d certainly be willing to put in the extra effort.

It’s a relatively small shop with a seemingly gigantic following as evidenced by the massive lines that perpetually develop during the weekend brunch primetime. We luckily stopped by during a completely coincidental lull in the lunch rush and practically walked right up to the register to place our orders.

The decor is very no-frills. It’s decorated rather aggressively with corny bagel-focused murals that cover nearly every wall inside and out including the ceiling. It’s also pretty dingy in there – a little too dingy, even for me. But, I can ignore dinginess and deal with tacky decor if the bagels they serve are the real deal – we’ll just have to wait and see. 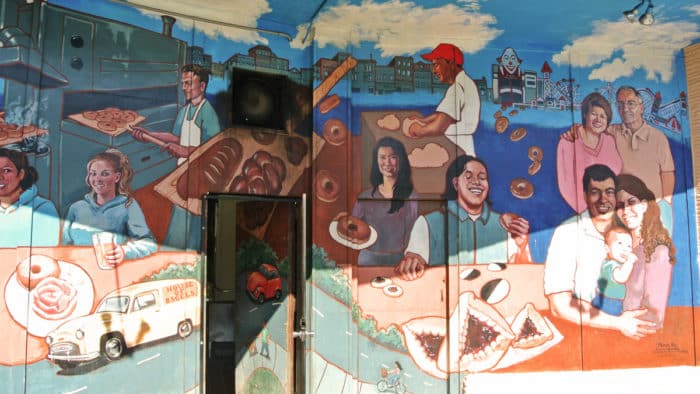 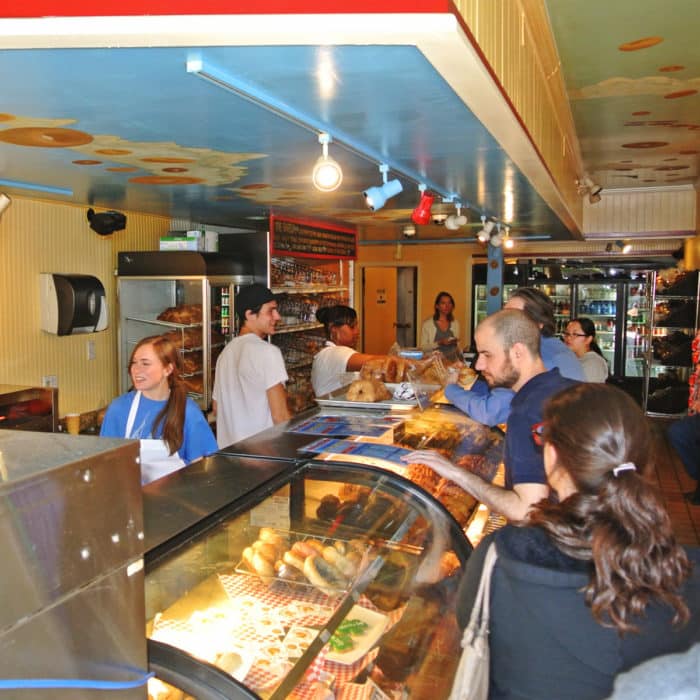 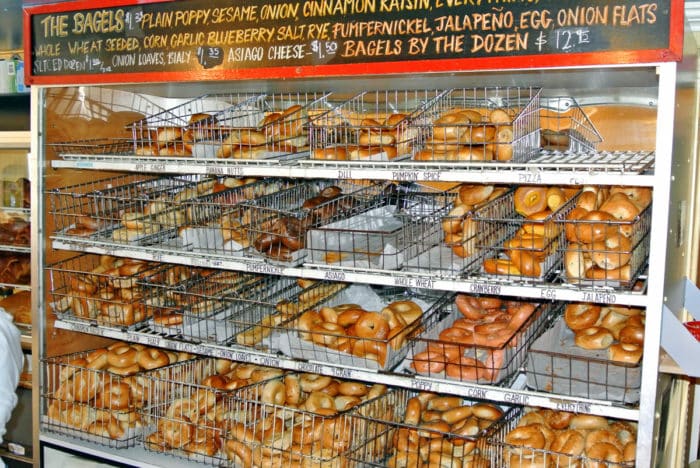 So, in dire need to quench a feverish bagel with lox craving, I ordered The True New Yorker directly from their menu. I opted for it to come on an Everything Bagel and anxiously awaited its potentially glorious arrival. This menu preset involved a bagel of my choosing topped with plenty of plain cream cheese, ample layers of nova lox, tomato, onions, shallots, and capers. This all at least sounded right.

So, how did it fare? Well, the texture of the bagel was pretty close to spot on. And the lox was good though it seemed a lot like the pre-sliced, packaged Costco stuff. But, the real issue with it was that the seed coating on the outside of the everything bagel was desperately lacking in “everything”. It basically had a barely-there sesame and poppy seed coating. Where were the crispy minced onions? Toasty garlic bits? And everything else? Nada. I dunno about you, but when I order an everything bagel, I want the flavorful stuff completely covering the exterior of my bagel. This wasn’t it.

And the cream cheese? Well, maybe I’m just used to the thick and creamy Philadelphia brand stuff we usually get on the East Coast, but this schmear was somehow verging on wet and runny. I didn’t even get my bagel toasted, so it’s not like the heat could be blamed for the schmear’s distorted texture.

This runniness made consumption of this breakfast sandwich an unavoidably messy and utterly sloppy experience. Pretty much the entire guts of the sandwich squirted out with each and every bite. It wasn’t exactly ideal to finish a meal with my face and hands completely smothered in wet, creamy, runny cream cheese – but they left me no choice. It’s not like this bagel sandwich was bad – far from it in fact, especially by SF standards. But, it still wasn’t the specimen of perfection I know and love all too well from my time in New York either. 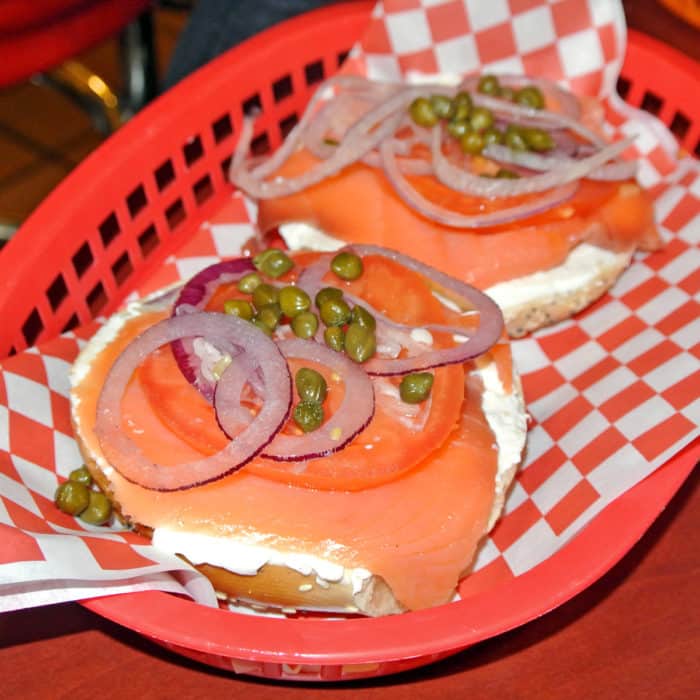 And despite their bagel-specific name, that’s not the only thing they make at House of Bagels. They also produce a large variety of traditional Jewish pastries such as hamentashen, black & white cookies, and of course rugelach. As a dude who can pretty much never resist the opportunity to eat homemade Jewish baked goods, I decided I had to give their Chocolate Rugelach a shot.

It was a pretty classic rendition of the pastry – layered and flaky with a sugary crystalline crust. It was kind of crackly and not particularly moist – so, spot on by traditional standards. The chocolate filling was also sort of dry and crumbly – not rich or gooey like most chocolate fillings you’ve probably ever had, but again that’s pretty standard for rugelach. I’m guessing this semi-sweet treat isn’t for everyone, but I enjoyed the four-bite pastry. I’m just not sure Amy who doesn’t have the same childhood associations as I do appreciated the not-particularly-pleasurable pastry as much as I did. 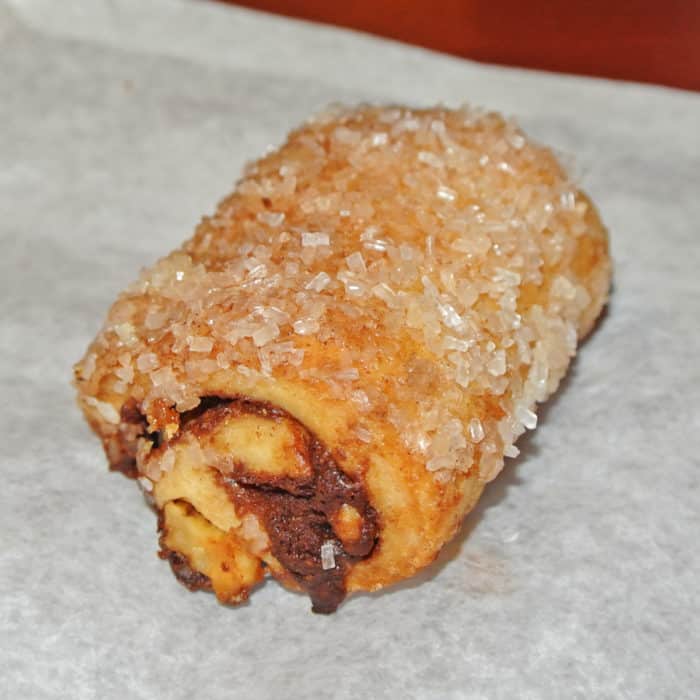 All in all, even with all of these caveats, the bagels at House of Bagels are still up there with the best bagels I’ve found so far in the Bay Area – though that’s not necessarily saying a whole lot. Unfortunately, due to its distance from my home, noticeable dinginess, and numerous executional flaws, I doubt I’d go out of my way for this place again. So, I’m back on the hunt for bagel perfection in San Francisco once again…

Where should I go next to find a real New York bagel in the Bay Area? Let me know in the comments below.