If you’re headed to Monterey, you’re inevitably going to go to the Monterey Bay Aquarium. And you should. It’s absolutely one of the best aquariums in the country. All of the exhibits are extremely well designed – I especially loved the one with the jellyfish. The aquarium is located in the most touristy section of town called Cannery Row which is full of now-defunct anchovy-canning warehouse factories that have been resurrected mostly as mediocre chain restaurants. Sure, you could eat at one of those places, but I think your best lunch option in the area is actually inside the aquarium.

The aquarium has a bustling and rather overwhelming cafeteria that is often swamped with long lines made of screaming kids. Skip all that chaos and put your name down at the sit down eatery right next to the cafeteria under the big sign that reads Cindy’s Waterfront. Cindy’s is named after Cindy Pawlcyn, the James Beard Award-winning creator of the acclaimed Mustards Grill in Napa Valley. It also follows the Aquarium’s Seafood Watch guidelines (just like Tataki in SF) and uses local, sustainable and organic produce in all of their dishes so it shouldn’t come as much of a surprise that Cindy’s is quite good.

Once a table is ready for you, you’ll be led to the back side of the building past the cafeteria to a separate, semi-secluded seating section with large windows that face out towards a beautiful waterfront view. Sure, you’ll still be close enough to the cafeteria to hear most of the chaos in the distance, but you’re just far enough removed from it to have a great, serene, sit down meal away from the screaming demon broods plaguing the aquarium.

To get the most out of the waterfront views, each table comes equipped with its own pair of binoculars along with a cheat sheet naming the creatures you’re likely seeing. I think this is pretty fun and it’s definitely not something I’ve seen anywhere else. 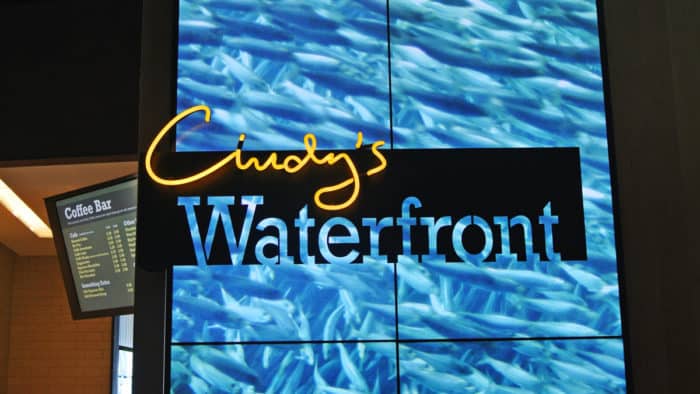 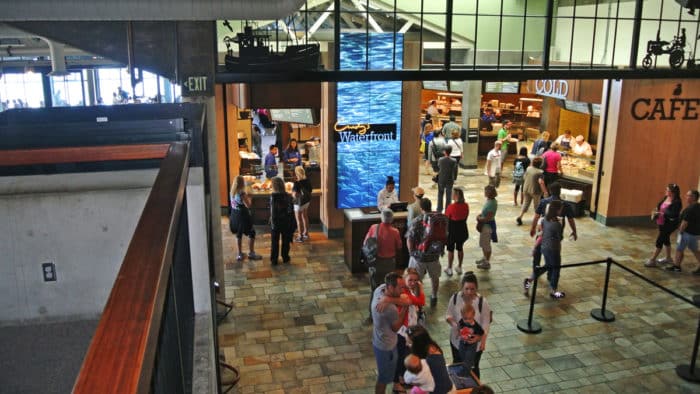 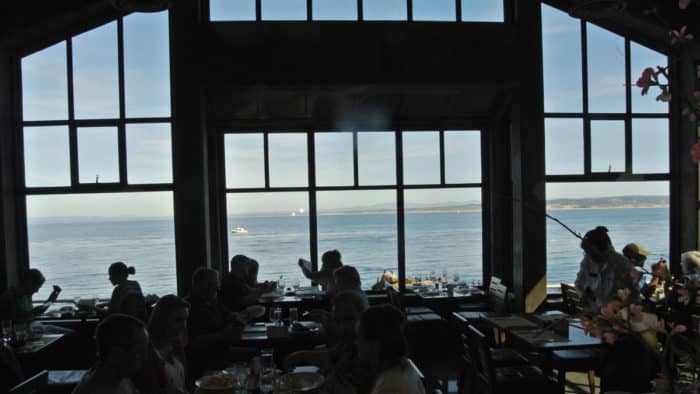 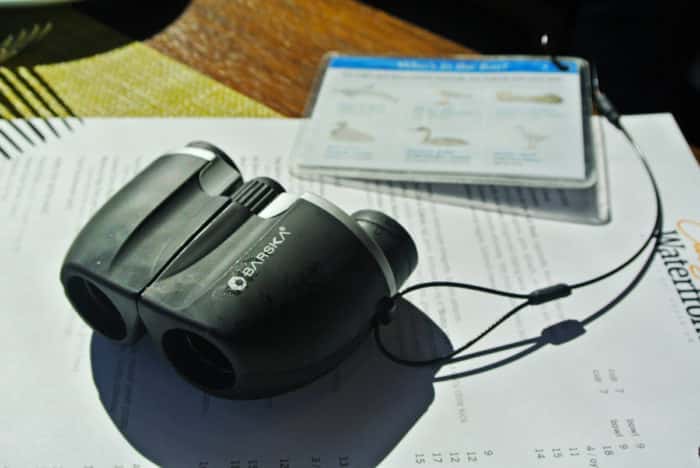 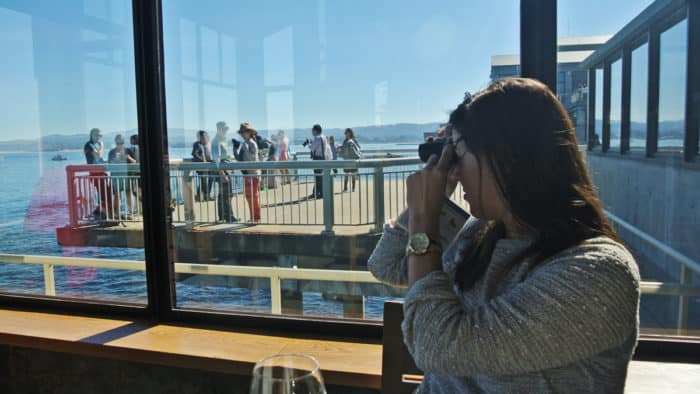 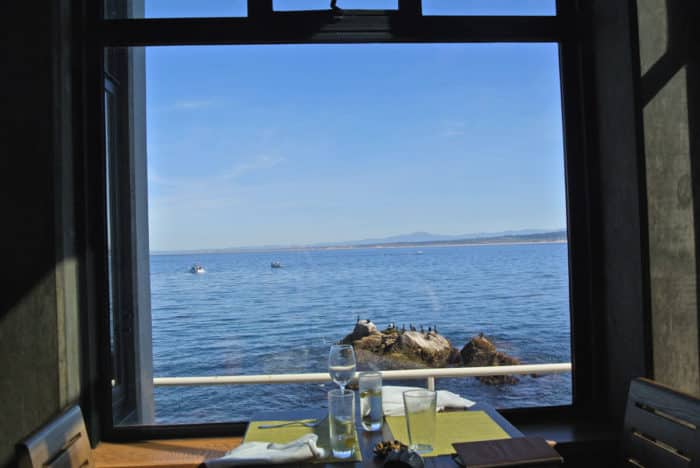 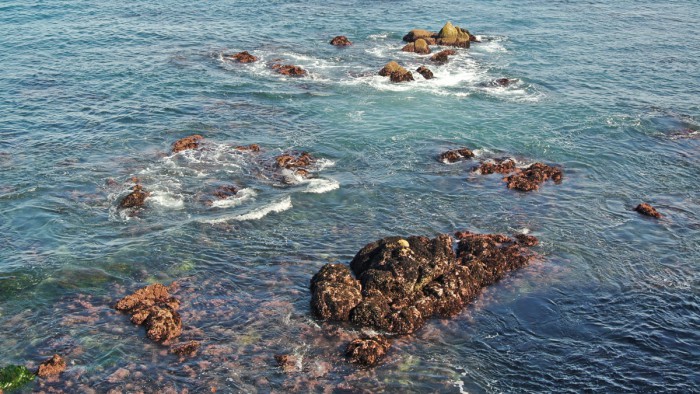 To help us ignore the masses of screaming children running wild around us, we selected a mixology style cocktail from the menu called Orchard and Bulleit. I didn’t expect to find a great cocktail at the aquarium, but this drink was really excellent.

I thought that the Bulleit bourbon, Belle de Brillet pear cognac, fig preserves flavors combined so nicely. There was a booziness and a sweetness that balanced really well though it wasn’t cheap at $12 for the cocktail. But, when you’re trying to drown out the screams of children it’s worth every cent. Plus, it was a darn good and strong cocktail. 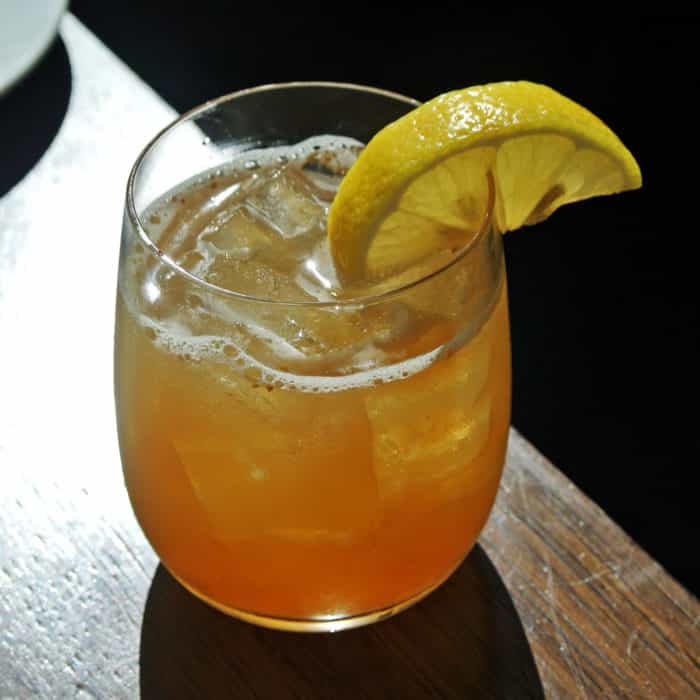 To kick off the meal and get a taste of what they can do with seafood, I ordered a bowl of their supposed Best-Ever Clam Chowder. Now, I’ve had some great clam chowders and pretty much all of them claim to be the best (see: Sotto Mare, Phil’s Fish Market, Billy’s Boston Chowder House, and of course Swan Oyster Depot). Well, this one was great. It’s definitely up there with the best bowls I’ve had in the area.

It was thick, hot, and creamy with lots of large, high-quality clam chunks scattered throughout the thickened broth. To make it even better, there was a very strong, rich, smokey bacon flavor integrated throughout. Sure enough, I found a generous handful of diced bacon bits thrown in to give each of my spoonfuls that extra oomph. 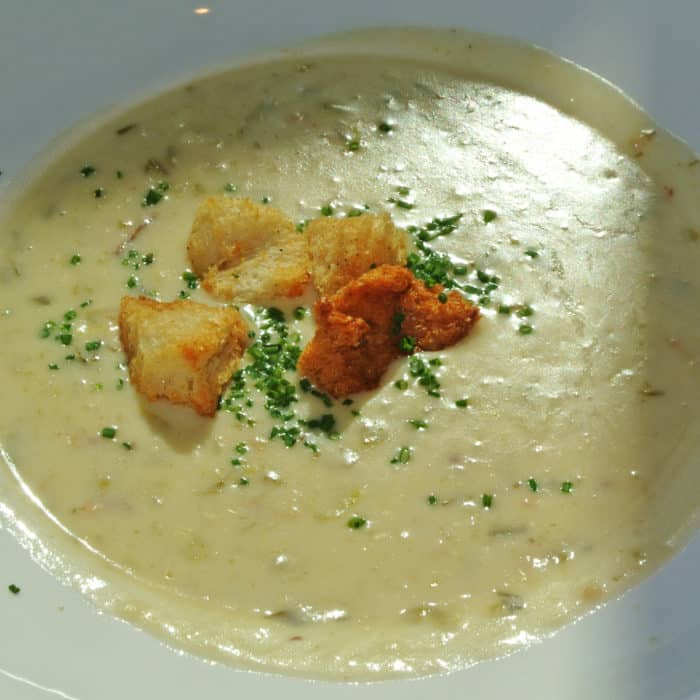 And since I was down in Monterey near Castroville – a town that is home to the annual Castroville Artichoke Festival and claims to be the “Artichoke Center of the World” – I knew I had to get the Roasted Castroville Artichoke. Now, I’m pretty sure I’ve never had an artichoke prepared like this – steamed whole and served halved with citrus, melted butter, and aioli – so I didn’t really know what to expect. But, I’ve had artichoke hearts and spinach and artichoke dip plenty of times, so I figured it was worth a shot.

Well, it was definitely interesting, but I just don’t think the texture of artichoke leaves was something either of us really appreciated. It felt just a bit too vegetal and stringy, almost like chewing on a palm frond or a bunch of leaves. Honestly, looking back, I think I probably wasn’t supposed to chew on the whole thing (I think I was only supposed to scrape off the meaty portion with my teeth), but no one told me otherwise so I did what seemed right at the time. The artichoke leaves themselves didn’t really contribute much flavor either so it really just seemed like a sneaky way for people to eat large scoops of citrusy, garlic aioli. Hmm, I guess I just don’t get it. 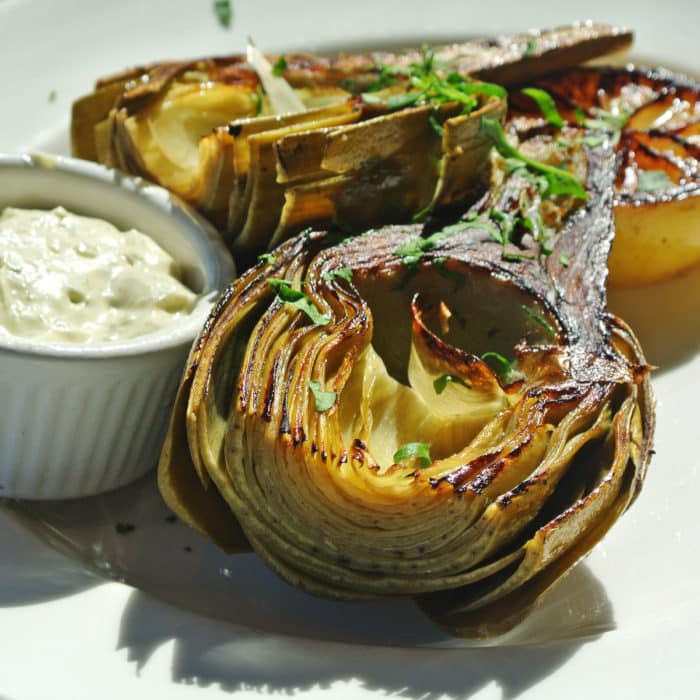 For the main course, we split two dishes, starting with a Half-Pound Niman Ranch Hamburger. It arrived a bit past the medium we requested, but it was charred very nicely and still had that classically delicious drive-through burger flavor. It tasted like it was cooked on an old-school flat top grill and there’s something that’s always just so comforting about that. 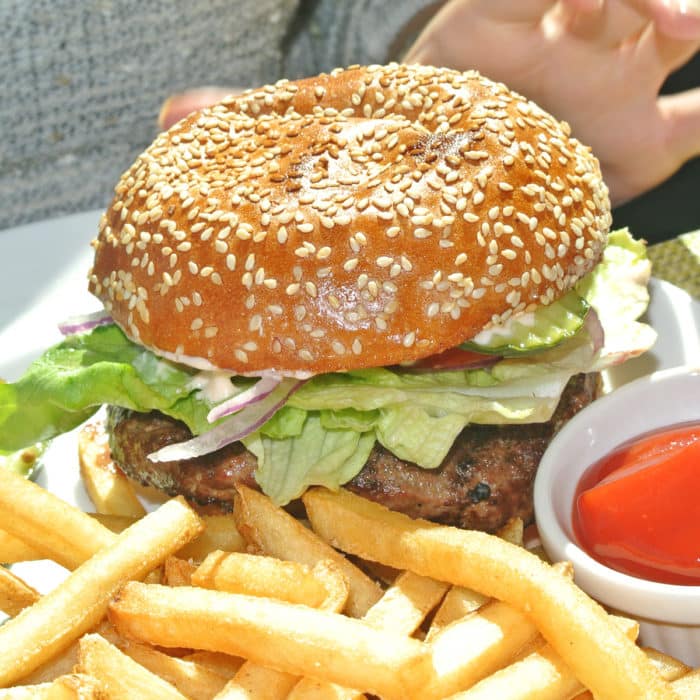 For our other main course, we got a West Coast Shrimp and Crab Roll in an attempt to test their seafood chops. Sure, the sandwich was a bit mayo-loaded, but the fresh, sweet shrimp and fresh, sweet crab meat filling was truly outstanding. The portion of high-quality seafood was impressive and that filling really shined inside each of the big, toasty split-top bun bites. 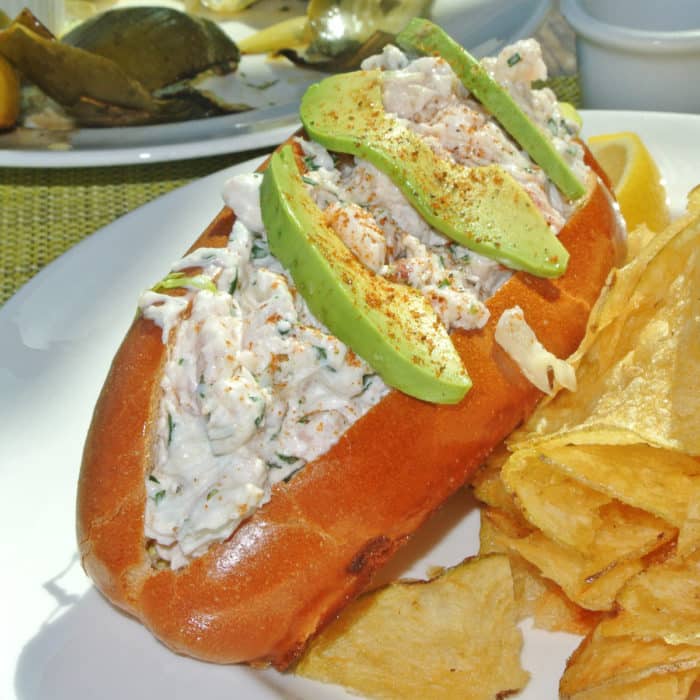 And now that our bellies were full and there was bourbon flowing in our blood, we paid our check and ventured into the chaotic mass of screaming children to experience everything the Monterey Bay Aquarium had to offer. It really is such a well-designed museum with tons of clever, visually stunning exhibits. It’s constantly changing and evolving, but here’s a little taste of what you might see when you get around to taking your visit. 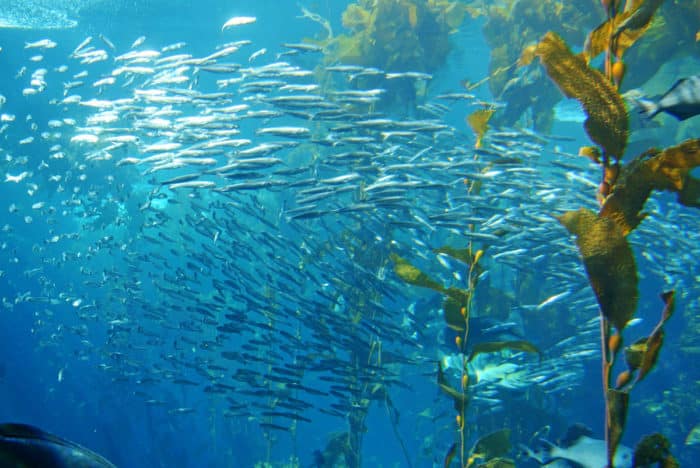 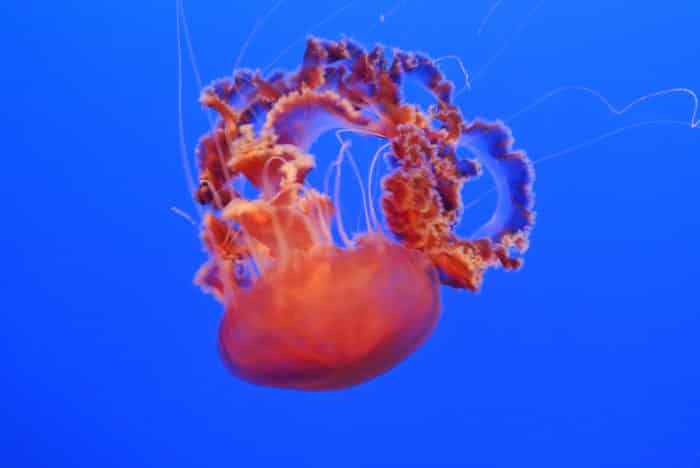 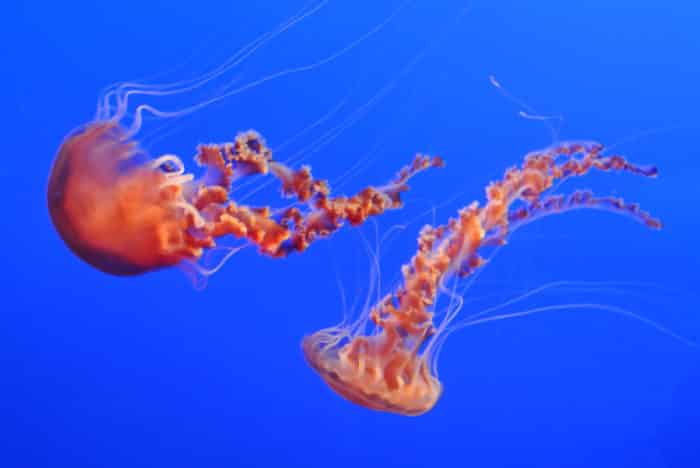 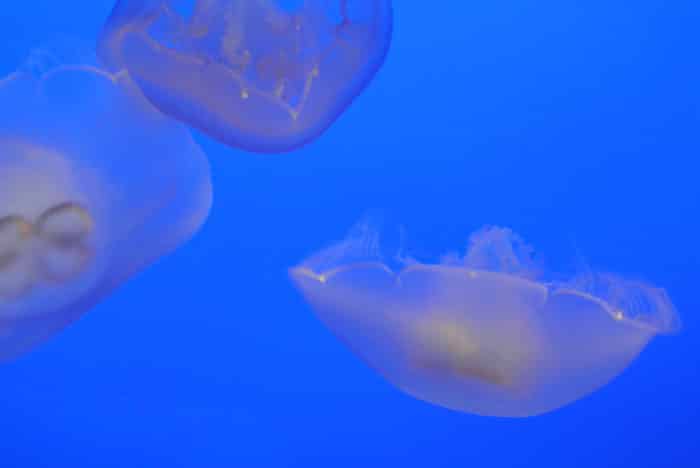 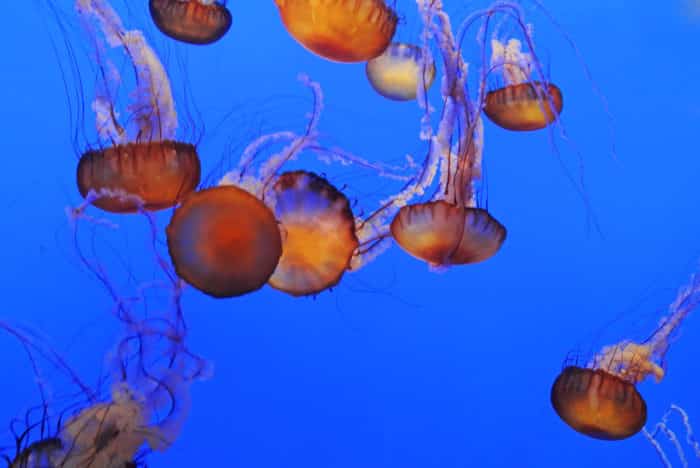 So, I’m pretty excited to know that even in a place as touristy and overrun by screaming children as the Monterey Bay Aquarium, you can still manage to have a flavorful, high-quality, high-end meal in a pleasant environment. The cocktail we drank was surprisingly good, but it was the seafood dishes where Cindy’s Waterfront really shined.

Got another lunch place near the Monterey Aquarium that I should check out? Let me know in the comments below.