I think most New Yorkers have heard of (and had their fair share of) Bon Chon Chicken. After originating in New Jersey and expanding to NYC and truly blowing up with hype and mega-popularity, this mini-chain has now spread its reach across the US and around the world. There’s even two locations out on the West Coast near me in the Bay Area – one not far from my office in Sunnyvale. Since lunch options in Sunnyvale are so scarce, I’ve found myself stopping in whenever the urge for a satisfyingly deep-fried lunch strikes.

I know it might sound blasphemous to say, but I think this Silicon Valley location of Bon Chon might actually be better than the flagship Koreatown location I used to frequent when I was living in NY. Even though this one is located in a very unimpressive looking strip mall and is not particularly well-decorated, the Korean Fried Chicken pieces are massive and much tastier – giving it the edge in my book. 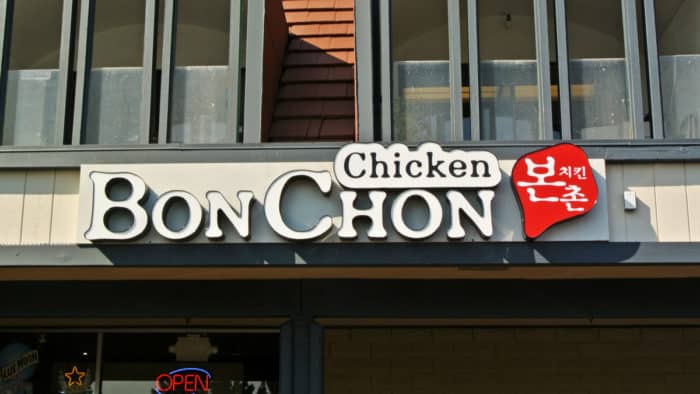 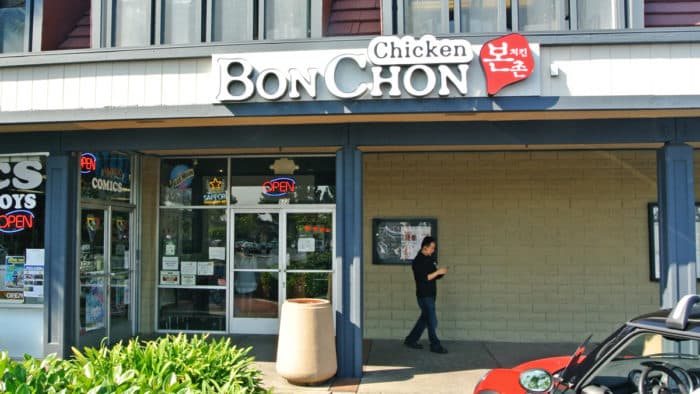 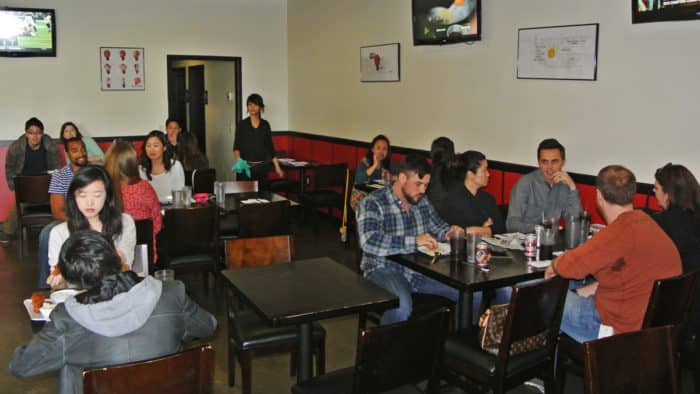 I’m not sure if everyone out here on the West Coast is as familiar with Korean Fried Chicken (KFC) as I am as an ex-New Yorker. A few years back, it was a huge deal – one of trendiest foods on the scene in NYC – and I’m not sure how far that KFC fever spread. If this is something you’ve never had the chance to try, I’d suggest making a trip to one of the Bay Area Bon Chon locations to give this crispy, dry-fried style of fried chicken a go. It’s awesome.

The method of preparing this chicken involves frying the wings and drumsticks twice to produce a hard, crunchy, crackly, greaseless exterior crust. After double-frying they get tossed in a Korean-inspired sticky sauce of your choosing. This Bon Chon has two options: Soy Garlic and Spicy Hot Garlic and I love both. To order a meal at Bon Chon, there are many combinations and permutations to consider – number of pieces, type of pieces, type of sauce, sides… the list goes on. In order to sample the widest variety of textures and flavors in this meal, I went with a Medium Mixed Bon Chon Chicken Platter which came with two drums and six wings half in Soy Garlic and half in Spicy Hot Garlic sauce with a side of Kimchi Cole Slaw.

The thing about eating out on the West Coast is that everyone is obsessed with sourcing high-quality local, organic, meats and produce for their restaurants. Even this fast-casual, cheap eats franchise is sourcing their chicken from a local, reputable supplier and you can tell. It’s still got that signature crunchy KFC exterior from the double-frying, but the chicken inside is so tender, juicy, and fresh tasting. Plus, the pieces are freaking massive. I remember the first time I ordered a meal at Bon Chon in NYC and found myself saddened and disappointed in the miniature drumsticks plopped on my plate.

But, these drumsticks at the Sunnyvale Bon Chon are truly massive and are so incredibly delicious in both the Soy Garlic and Spicy Hot Garlic glaze flavors. There was a nice level of heat to the Spicy Hot Garlic flavor, but it was nothing that would be too overwhelming for anybody. Both glaze flavors are definitely delicious, but if I had to only pick one, I’d probably go for the classic sweet and savory Soy Garlic flavor which perfectly exemplifies Korean Fried Chicken for me. 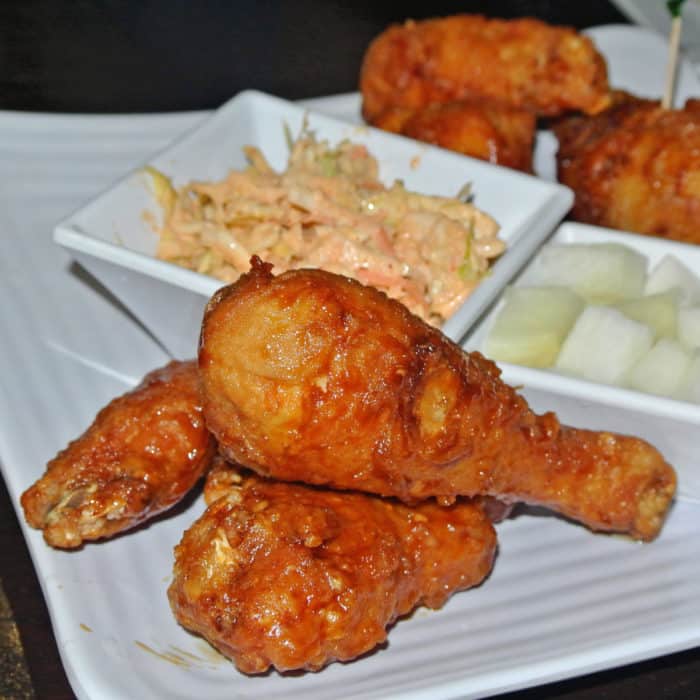 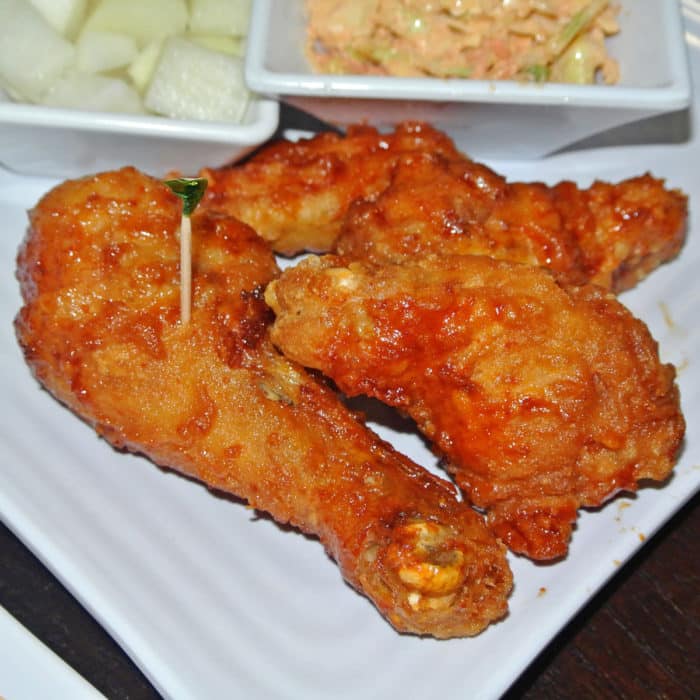 And although it may seem like the case, fried chicken isn’t the only thing offered on the menu at Bon Chon. Out of pure curiosity’s sake, I ordered a non-chicken dish on this visit and went out on a limb with a crazy sounding thing called Bul-go-gi Taco Wraps.

These honestly ended up being a heck of a lot more delicious than I expected based on the weirdo-fusion description of the ingredients alone. They were sort of like mini burritos – not tacos – filled with shredded bulgogi beef that was absolutely dripping in a flavorful, juicy, garlic jus. They came plated next to rather hefty squirts of both ranch dressing and spicy mayo which just seemed to make sense as a pair with the Asian-American fusion wrap.

I definitely preferred the spicy mayo over the ranch dressing which tasted out of place in the context of this dish. And I don’t think anything about this dish was particularly authentic or even very Korean barring the use of bulgogi beef, but it was still pretty darn tasty – especially when slathered in spicy mayo. 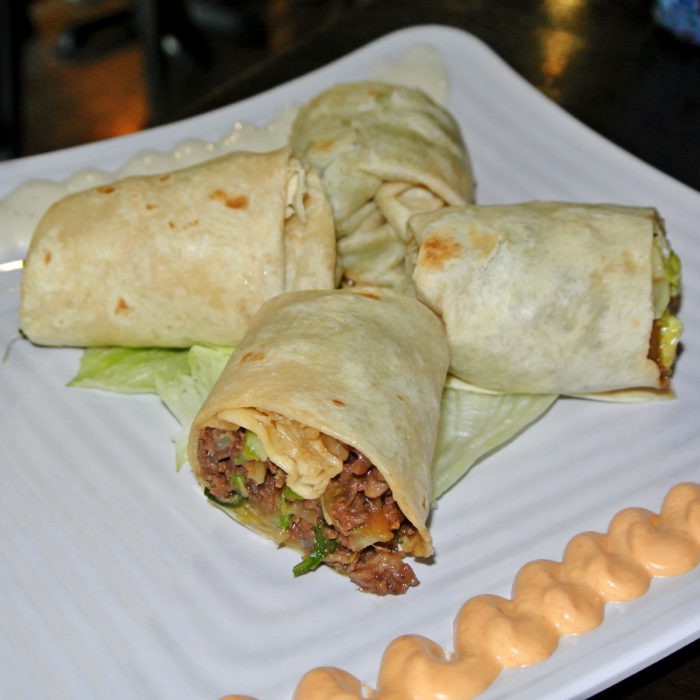 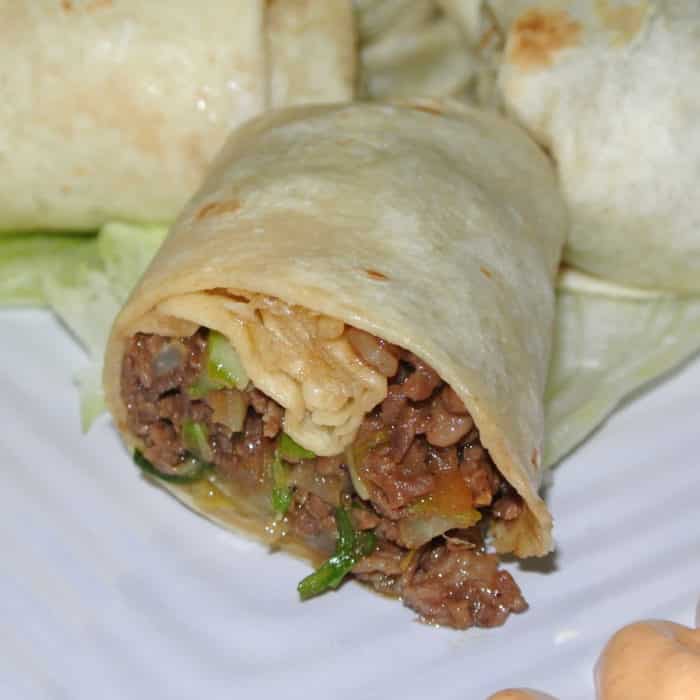 So, I’m pretty happy to have found a great, cheap Korean Fried Chicken source in Sunnyvale. Bon Chon is a comforting piece of my old New York City life and sometimes it just feels nice to fall back on old habits, especially in the sterile, lunch-lacking Silicon Valley area. And they do serve more than just fried chicken, but let’s be honest – you’re going to Bon Chon for the Korean Fried Chicken.

Got another great, cheap lunch spot in Silicon Valley I should check out? Let me know in the comments below.