The occasion of this particular visit was actually rather unique as well. As many of you probably already know, I’ve been a very active user of the social network Foodspotting for almost four years and I’ve made some good IRL friends on there along the way. My friend Meng, who I had originally met through Foodspotting, was in town from NYC. She’s been friends with Alexa, one the Foodspotting founders, for a number of years and she invited Amy and me to come along for a mini eat-up with her local SF crew. I, for one, was very excited to meet the inventor of the platform that had become such an essential part of my daily life for the past four years. I was entering this meal excited to meet some new cool people in SF and ready to be totally blown away by incredible Thai cuisine.

So we hopped in a cab and pulled up to the address, but we honestly couldn’t figure out where the place was once we were on the street. If you have trouble finding the restaurant, don’t worry, you’re not alone. It’s not obvious from the street, but you can access it either directly from the street at the corner of Ellis and Cyril Magnin or through the Parc 55 Hotel by heading up to the second floor and wandering down a few hallways – that’s what we did. Just follow your nose – you’ll know when you’re getting close because when you’re 50 or 100 feet down the hall from it the bold, funky, punch of fish sauce will hit you right in the face. In any case, it’s not obvious where this restaurant it, but ultimately it’ll be worth the effort to find it because the food is gonna knock your socks off.

Inside, it doesn’t feel fancy by any means, but it definitely has been thoughtfully designed, decorated, and arranged. The room is well lit and defined by earthy, stained wood tabletops, jet black wood chairs and is accented by authentic Thai miscellany like tin food canisters and ornate ceramic plates. It’s all very tastefully done and puts it right on the comforting line of upscale and low-key. 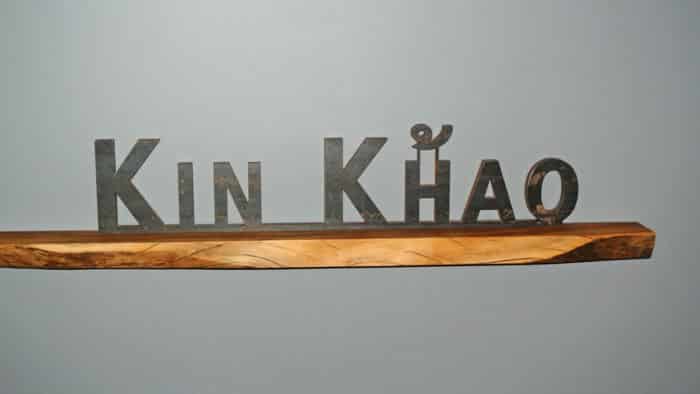 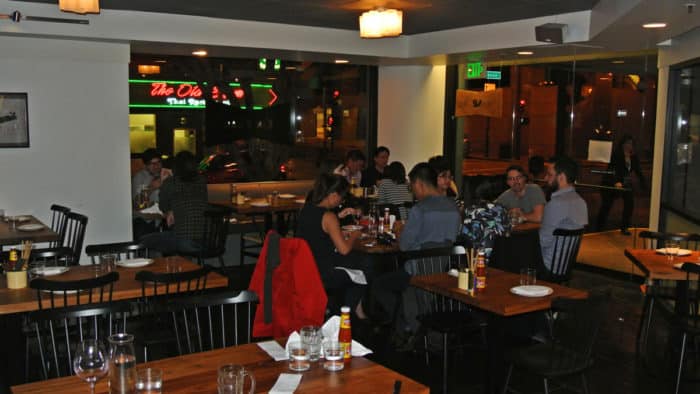 As soon as we were seated, I looked over the menu and noticed the selection of rather unique sounding cocktails. The restaurant offers beer, wine, and sake but I couldn’t resist the urge to try to weirdest sounding cocktail on the menu called Rasa Umami.

This wacky drink was made with Hidalgo Amontillado Sherry, Black Grouse Scotch, Kin Khao Turmeric Lime Cordial, and White Pepper. Ordinarily, I love savory cocktails like Bloody Marys and Micheladas a lot, but even this was a bit much for me. Sure, I drank it and enjoyed it, but I think that turmeric flavor sort of dominated the drink’s flavor profile too much for me. Next time, I’d likely select something slightly less adventurous and likely more successful. 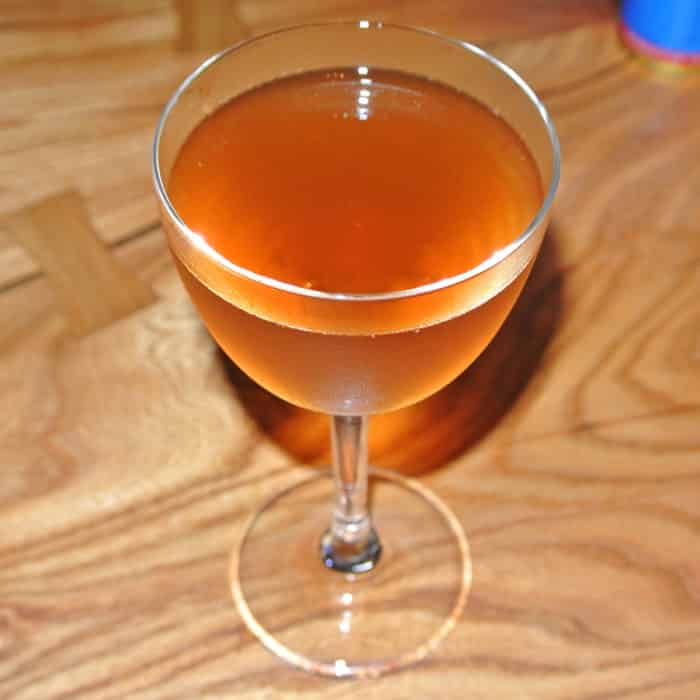 The first course to arrive was the much hyped Mushroom Hor Mak Terrine. I’m a big fan of terrines and was excited to try this vegetarian one even though I had read very mixed reviews about the dish. I really wasn’t sure if this was going to be a winner or if it was just all hype, but I fell in love with this dish in only a single bite.

I grabbed a crispy rice cake from the plate and scooped a bit of that curry-loaded mousse directly from the jar onto it. I found that the terrine was light, creamy, but had a real strong curry kick. It was studded with tender-cooked mushrooms and came topped a lighter-than-air coconut foam. The mousse-like terrine had such an impressive boldness and so much flavor complexity. This dish really was a great sign of things to come in the meal. 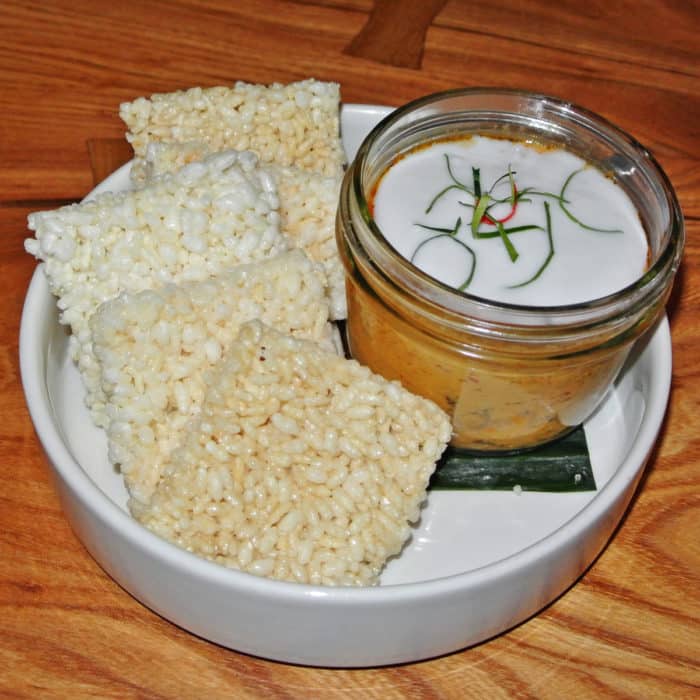 Next up was the Pretty Hot Wings – yes, that was the real name. I still don’t really know if they were using the word “pretty” to mean “beautiful” or to indicate that they were moderately spicy – either way would be acceptable.

They came served as the entire wing-and-a-half and came three pieces to an order. The wings were fried very well and got a little crispy on the outside and remained nice and juicy and tender on the inside. Actually, the flavorful glaze stole the show here. This was another spicy dish, but in contrast to the Mushroom Terrine which had straight red curry spice, this had a great fish sauce funk and a variety of other interesting twists added in. The Nam Pla fish sauce-garlic marinade and tamarind-Sriracha glaze were just so incredibly delicious on this chicken. Again, there was just so much complexity and subtlety to these flavors – I loved the dish. 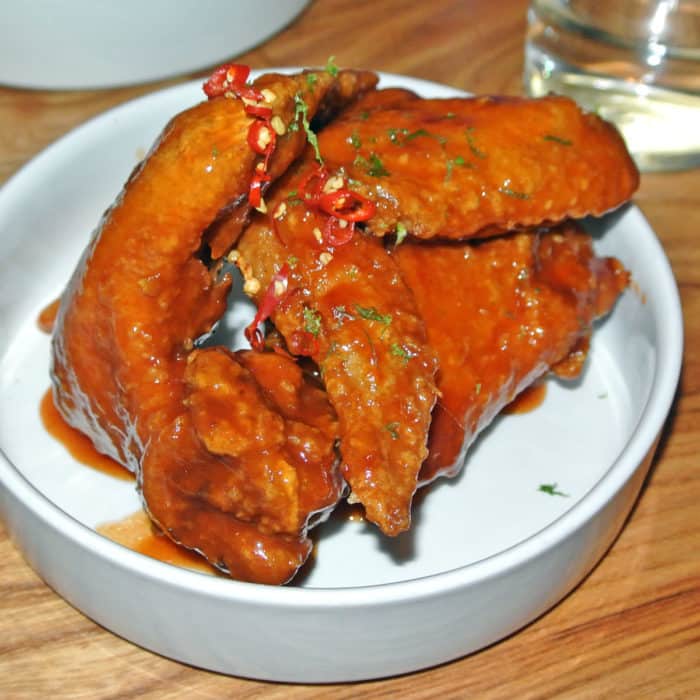 Then we dug into the Wok-Charred Brussel Sprouts in XO Sauce. XO Sauce is definitely not something you’d expect find in a Thai restaurant – it’s actually more traditionally found in Hong Kong style Chinese restaurants.

But, this umami loaded sauce/condiment/topping which is made with dried scallops, dried shrimp, dried ham, ginger, and garlic felt right at home on Kin Khao’s menu. The XO sauce added a sticky, salty pungency to the nicely cooked Brussels halves and was a wonderful spice reprieve from the previous dishes. This was another success. 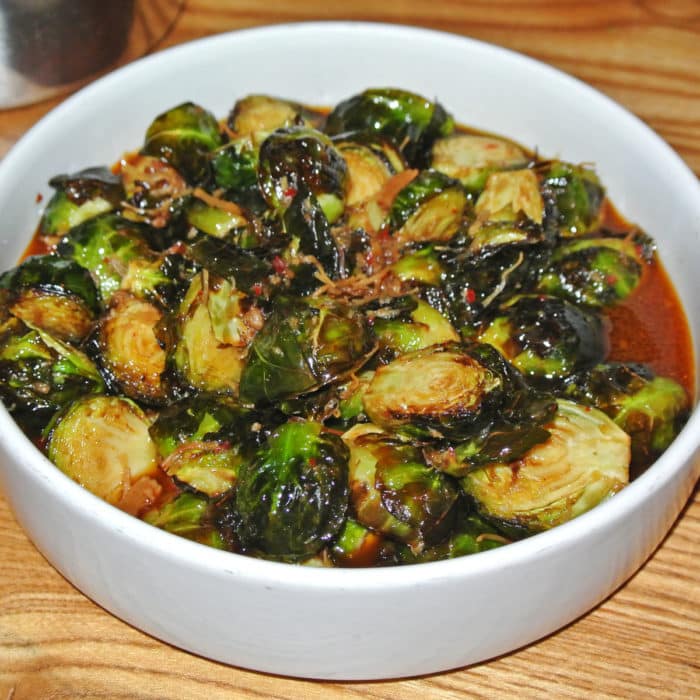 From there, it was time for a dish called Sai Ua + Namprik Noom. The main attraction on this dish is a grilled house-made Northern Thai pork sausage which was served with spicy young pepper relish, chicharrones, and sticky rice.

All of the elements of this dish were really nice, especially the spicy young pepper relish, but I didn’t find this dish nearly as memorable or essential to order as everything else we had during the meal. It’s good, but there’s better thing you can get. 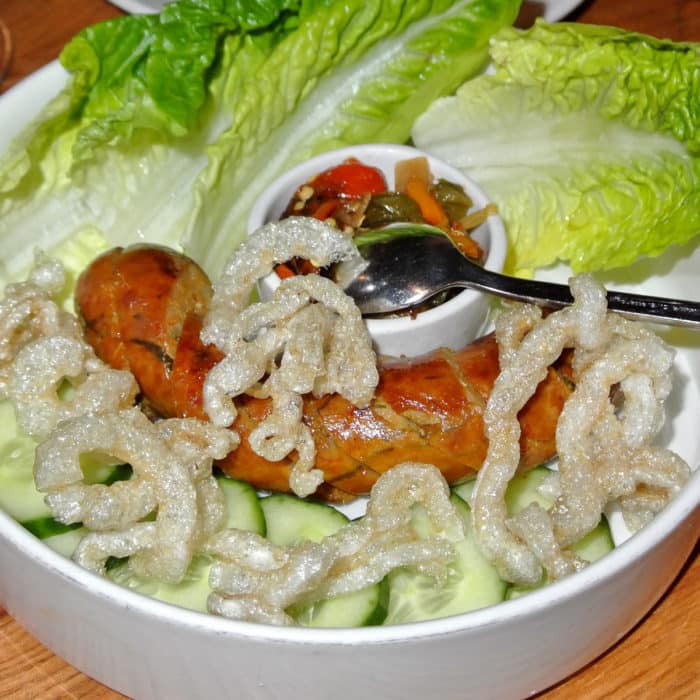 The Caramelized Pork Belly would be a much stronger pick. These massive hunks of meaty pork and pork fat were served in a bubbling clay pot cauldron and came coated in a dark, sweet, savory, soy based sauce. The meat was luscious beyond words.

I absolutely loved the ratio of tender, juicy meat to melty fat and that sweet soy glaze was incredible on it. If I wasn’t trying so hard to not look like a complete asshole at this dinner, I probably would have drunk every last drop of the leftover juices straight from the clay pot. 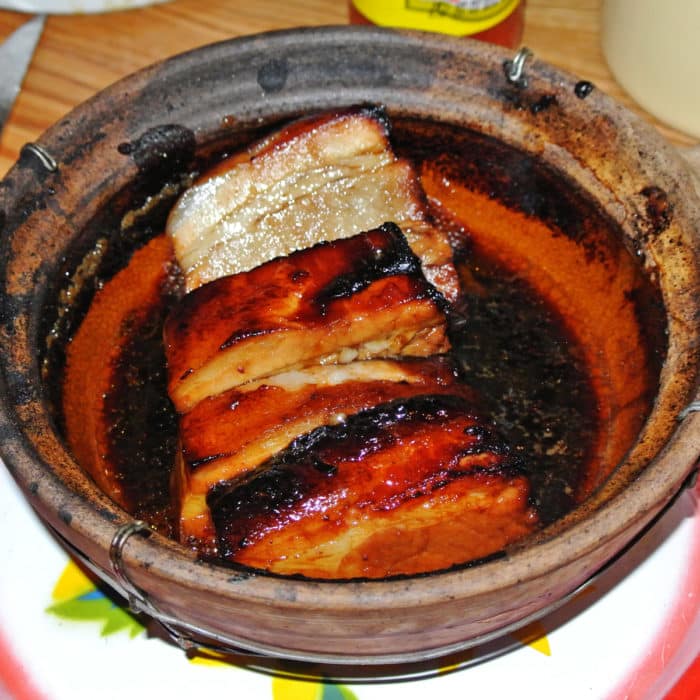 And then it was onto the big plates – the curries. These are pretty much the most expensive dishes on the menu at $27 a pop, but they’re really good and when you’re eating family style like we were, it definitely makes sense to get some of these for the table.

First, was the Massaman Nuea made with braised beef cheeks in Massaman curry paste with coconut milk, burnt shallots, and potatoes. This was incredibly flavorful and involved a lot of sour, funky, and spicy flavor complexities. And those beef cheeks – oh my god – those beef cheeks. Every bite was so ridiculously tender – each one practically melted in my mouth. For optimal consumption, get some beef cheek with some curry-soaked rice and plenty of crispy shallots together in a single bite. 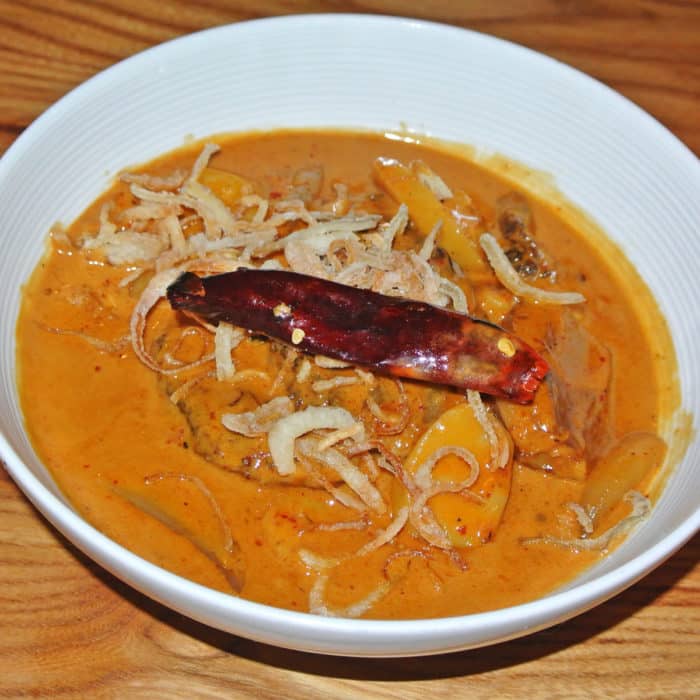 Once again, the boldness of the flavors in this dish were truly astounding and absolutely unusual. The rabbit meat was cooked very nicely – it was super-moist and very tender. It paired perfectly with the incredibly complex green curry broth and it was nearly impossible to hold myself back from slurping up the entire remaining contents of bowl. 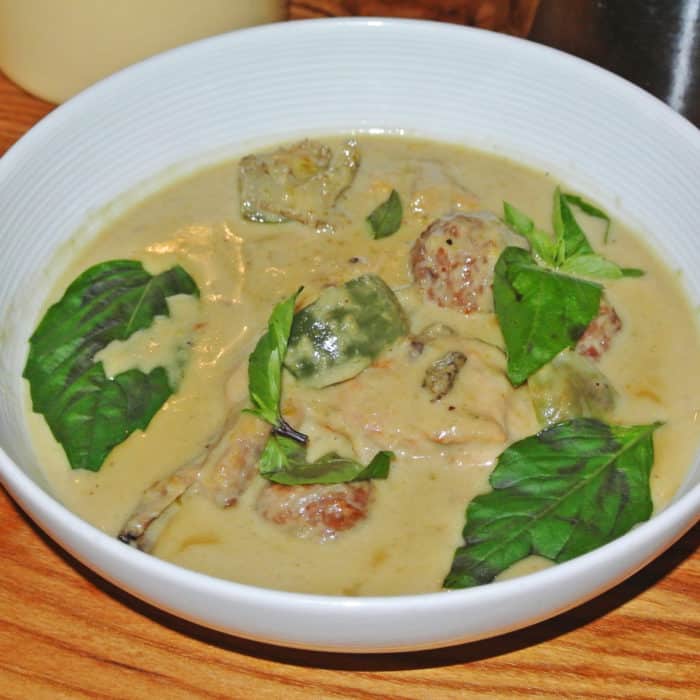 So, while it definitely cost more to eat at Kin Khao than at my usual, neighborhood Thai joint, it really was worth the extra expense for the chance to experience those complex and unique takes on Thai cuisine. Everything was incredibly bold and extremely delicious and I’m glad that I now have a solid place to recommend in the Union Square area. I just wish the place was a little less confusing to actually find.

Got another uniquely flavorful Asian restaurant I need to check out in San Francisco? Let me know in the comments below.