Now, I’ve already got my favorite in the Mission and the Tenderloin, but it never hurts to have a solid burrito in my back pocket wherever I find myself in the city. So one day, after hanging out at the Japanese Tea Garden in Golden Gate Park, I found myself both hungry and itching for Latin American comforts. Green Chile Kitchen was already at the front of my mind and we were close enough to it that it seemed like a logical place to stop in for a quick bite to see what all the fuss was about.

When I get on the burrito topic, usually the kind of places I end up talking about are pure Mission-style Mexican joints – often the heavy-hitters like El Farolito, La Taqueria, and Taqueria Cancún. But, Green Chile Kitchen is a little bit of an anomaly. It’s actually a New Mexican restaurant… you know, like the state… New Mexico. This place is definitely not just another classically divey Mission hole-in-the-wall. It’s actually a clean, polished, well-designed place with a lofty-ceiling, lots of natural light, and plenty of Southwestern flair.

It’s the kind of fast-casual place where you line up at a register as soon as you enter, place your order, and receive a numbered sign so that you can find your own table. For some reason when I visited, this large, cavernous, echoing space was filled with a number of families with out-of-control screaming children. These demon-seeds sort of detracted from my lunch experience, but I don’t think this place would necessarily be swarming with infantile terror like this all of the time.

I’ll be the first to admit that I prior to coming to Green Chile Kitchen, I did’t know a whole lot about New Mexico or New Mexican cuisine outside of Breaking Bad. But, I figured it couldn’t be so different from the Mexican and Tex-Mex classics already I knew and loved and I was excited to try something completely new. 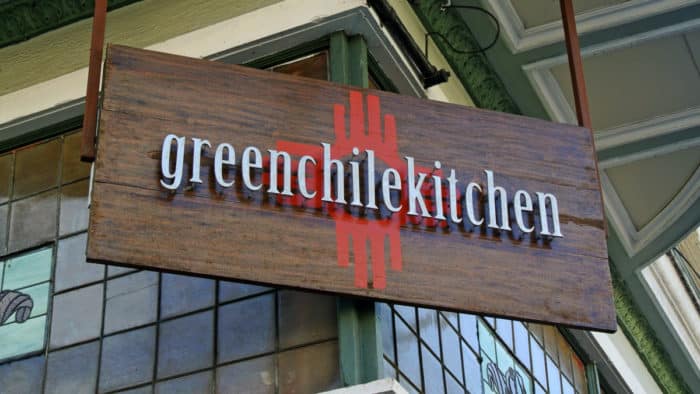 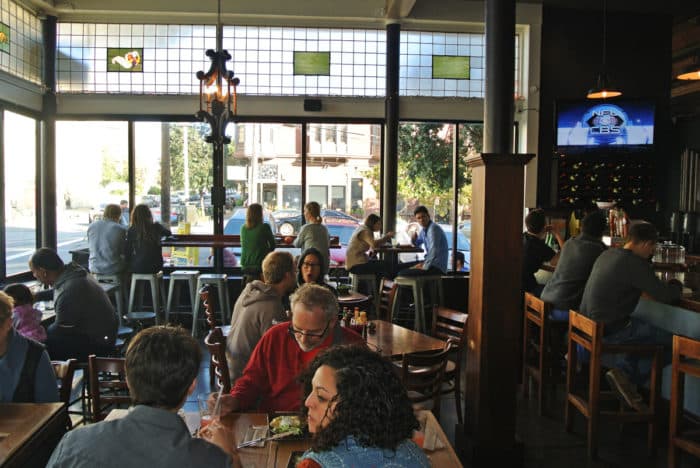 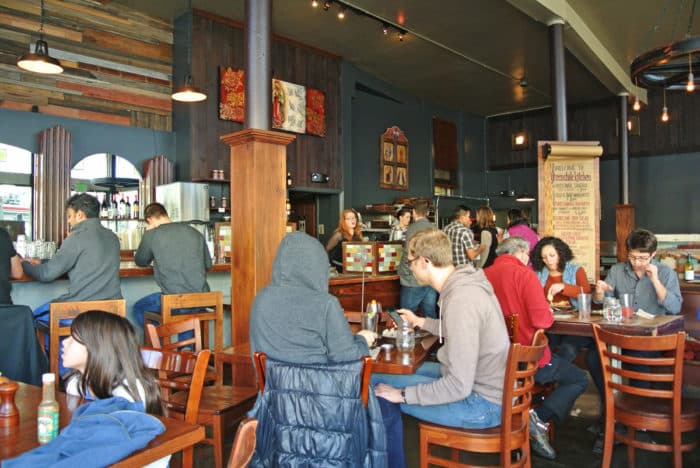 Since Amy and I were once again hungover and in need of culinary aid, we figured a large bowl of Red Chile Chicken Pozole would be a perfect pick-me-up. In fact, this stuff was incredible. It was piping hot, bright red, boldly flavored, and loaded with tender chicken and large, potato-like hominy kernels. This soup was so incredibly comforting and I think the giant hominy kernels were the key to its success. We’ll definitely be back for more when we can’t stomach anything but soup (and probably other times too).

And to pair with the stew, we knew we wanted to try one of their much-hyped burritos. But, we still attempted to go the healthier route and ordered it as a Steak Naked Burrito – sans-tortilla and served in a bowl. While ordering I also used the keyword I has read about online: “Christmas” style. Apparently, requesting a “Christmas” burrito is a big deal in New Mexico. Basically, it just means that you want both their famed red chile sauce and green chile sauce dumped on top – and you should because that stuff is delicious.

The dish came served in a large stoneware bowl with a fistful of fresh tortilla chips and a side of three blue corn masa tortillas. Welp, so much for our carb-less plan. As it turned out, those carbs were worth the caloric splurge. The fresh, blue masa tortillas were incredibly delicious and had an extremely interesting, almost-rough texture and complex, nutty flavor.

They were the perfect vessel to transport those tender, salsa-topped steak, rice, and bean bites directly into my mouth. Actually, using all of the provided elements, I basically just transformed the parts in my own handmade tacos. These were really quite delicious, even though they sort of defeated my healthy eating intentions. Oh well, you live and learn. I just couldn’t resist. 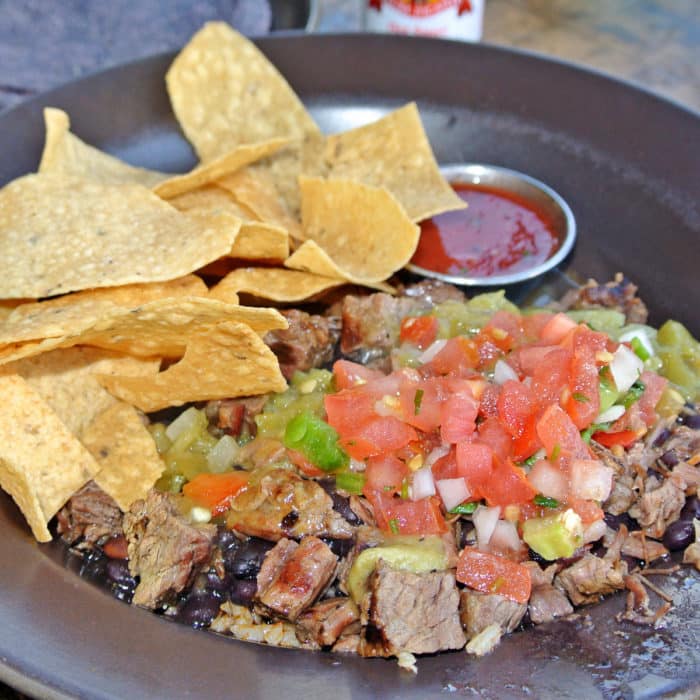 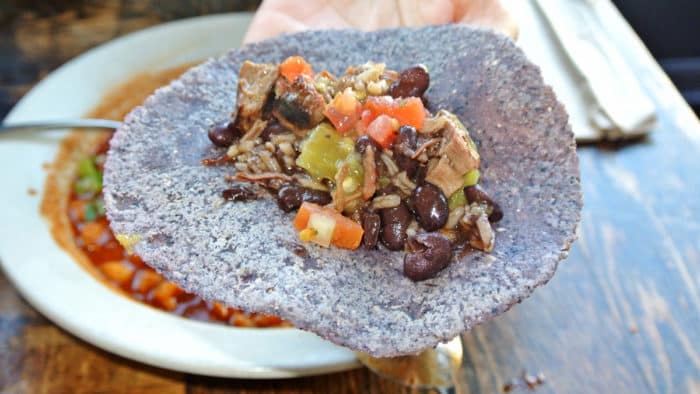 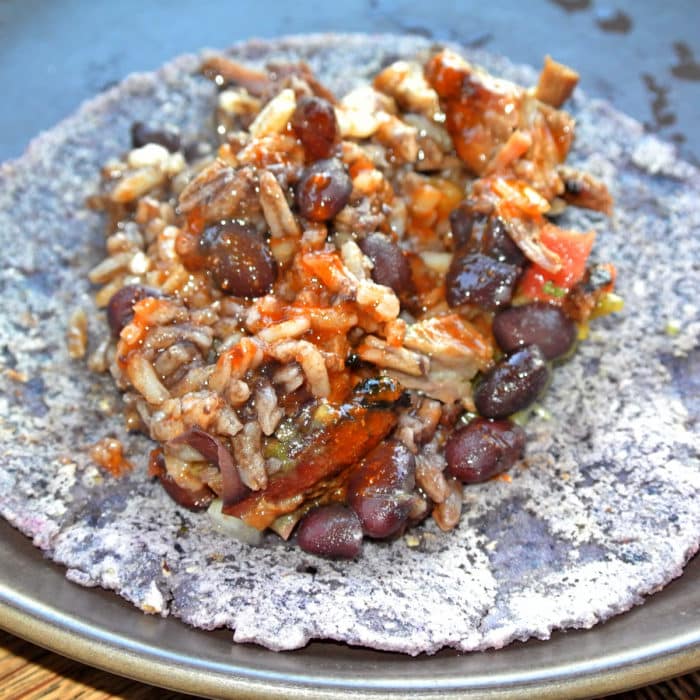 As an alternative, consider the Green Chile Pork Quesadilla instead. It was loaded with flavorful, fresh ingredients like sautéed red onion, roasted corn, green chile (of course), and pico de gallo with big, tender hunks of pork and plenty of super-melty jack cheese. This was just as tasty as the burrito bowl. 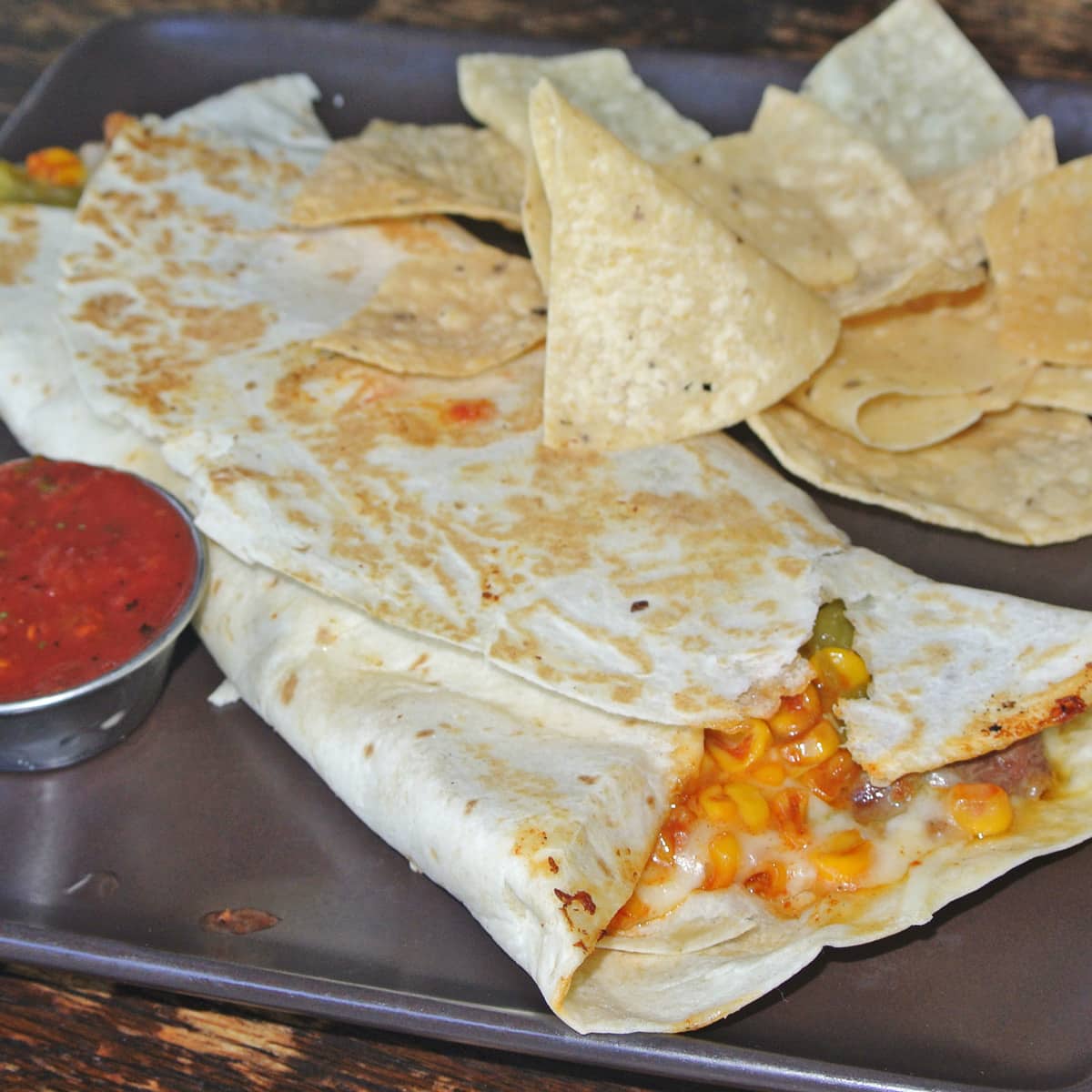 Also, don’t sleep on the Green Chile Pork Stew. Their pozole is killer, but I think this bright green, meaty, chunky stew is even more delicious and craveable than the alternative. This is the sort of thing I always want on a rainy, dreary day. 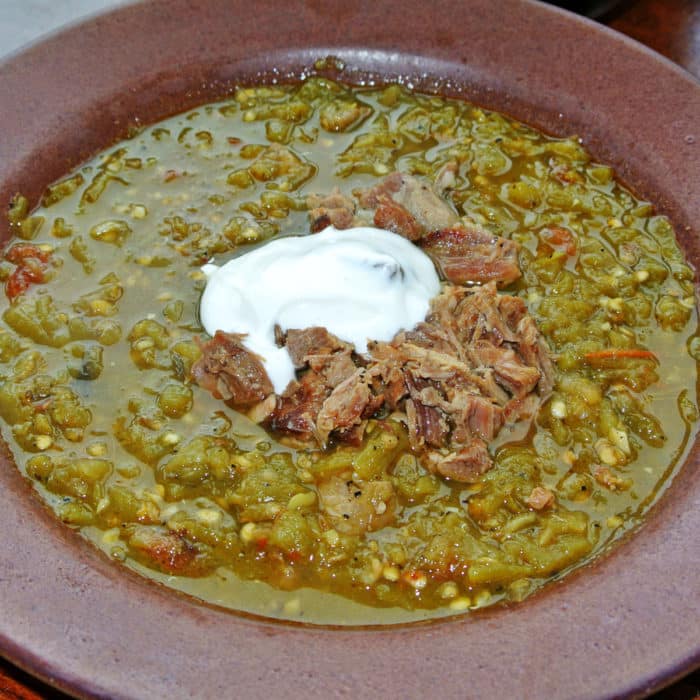 Their brunch ain’t anything to overlook either. Take, for instance, the Root Vegetable Hash which comes loaded with a heaping pile of Southwestern pulled pork, a variety of flavorful sauces, great beans, runny egg yolks, and outstanding homefry style potatoes. This is certainly one of the better brunch dishes I’ve had anywhere in San Francisco. 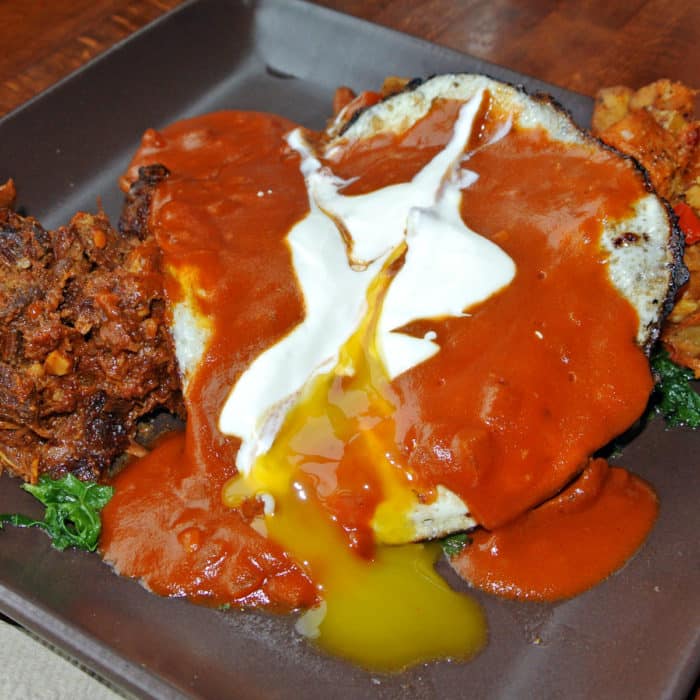 Did I mention that all of this food was incredibly inexpensive? For a place this well-designed with such large-portioned, high-quality food, it’s hard to believe that I’m always able to get out of there with a meal for two for under $20. But, at Green Chile Kitchen this is the reality. 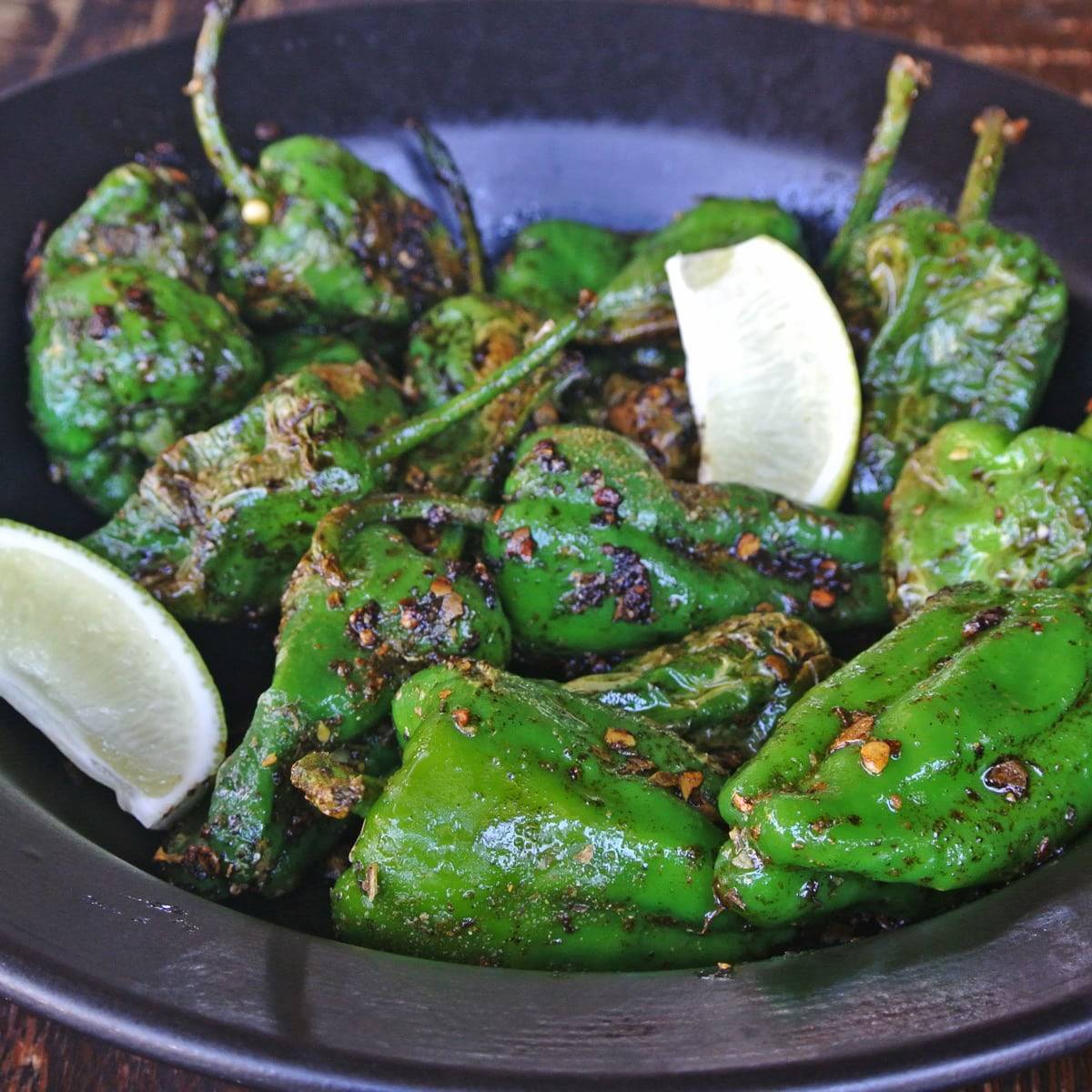 So, I’m glad I’ve had to opportunity to experience New Mexican cuisine and that I have another excellent burrito source not far from home. Oh yeah, and that pozole? I’ve got a feeling there’s gonna be a whole lot more of that in my future.

Know another killer Southwestern spot in SF that I should check out? Let me know in the comments below.