I’d argue that beer is almost always better when consumed along with food. It just pairs so well with anything and everything… but especially toasty, crispy things. One late evening while I was drinking with a few friends on Polk Street, we stopped in to a nearly unmarked bar called Woods Polk Station that I had heard good things about so that we could fill our bellies full of bubbly beer goodness and some tasty late-night munchies.

The place was quite small and had a ski resort mountain lodge vibe with its fake flickering fireplace displayed on the TV overhead, quiet, laid-back vibe, and simple wooden bar slanging gorgeous goblets of craft draft beer. It’s cozy and quiet and I think it’s quite a nice option when you’re looking to escape the general craziness of Polk Street with a few glasses of beer.

Actually, Woods Polk Station brews a variety of their own beers, but I think the best part about this cozy, little bar is the fact that they serve big, hot, baked El Porteño empanadas right there behind the bar to be eaten with your beer. There’s a warming oven tucked away behind the bar and at your request, your beer-tender will happily pull one of those amazing, steaming-hot, Argentinian pockets of meat (or veggies) out for you. Beware that supplies are limited, so depending on the time of night you go, they might not have every filling option listed on the menu. 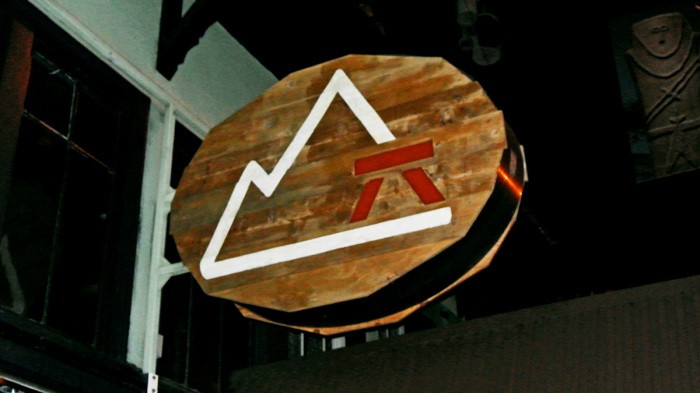 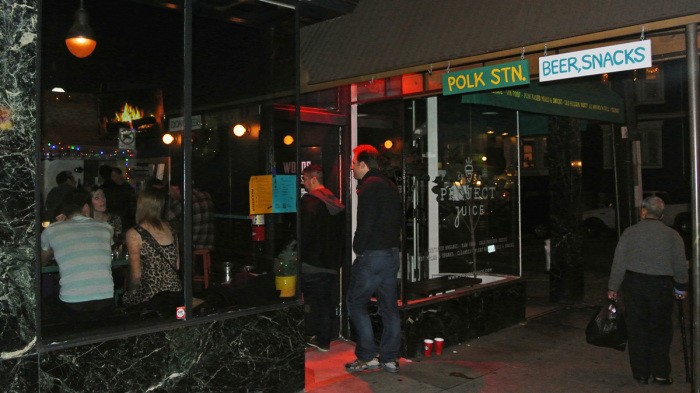 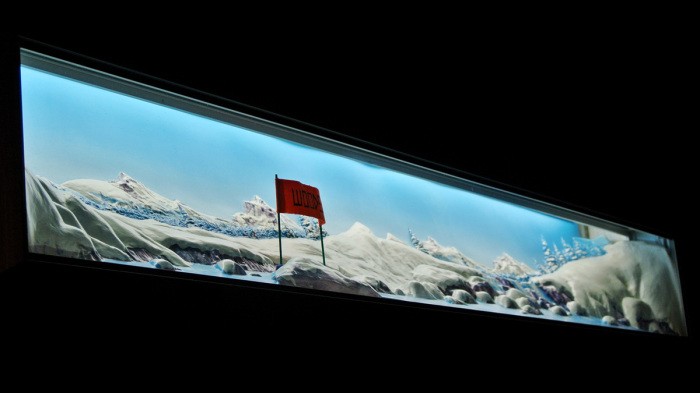 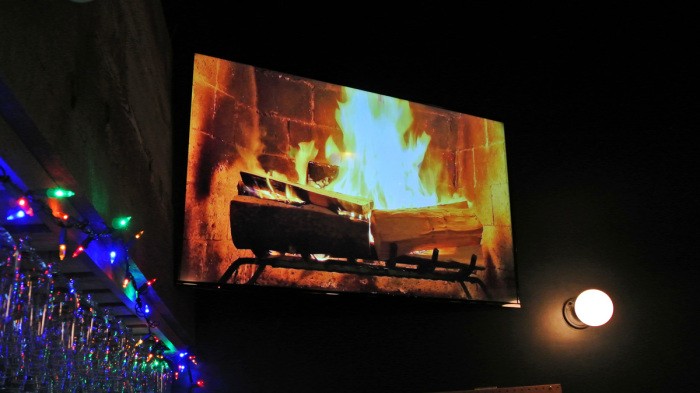 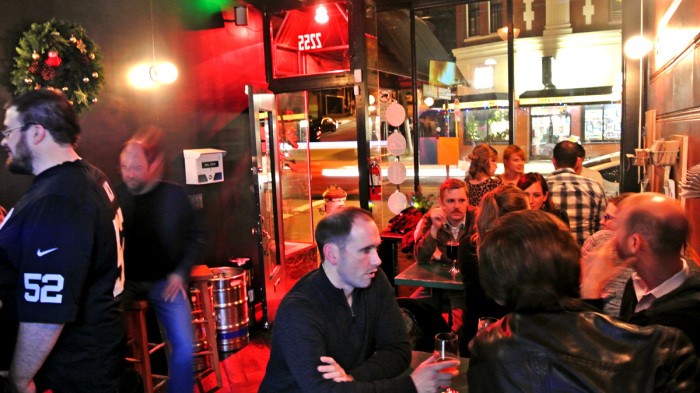 First and foremost though, this place is a beer bar. A very good one, in fact. Woods Polk Station is a small place but still manages to run a solid selection of seven draft beers at a time. When I visited, the selection included four brewed by Woods Polk Station themselves. On a chalkboard on the wall, I spotted a sign offering a four-beer sampler and took the opportunity to try all four made by Woods.

I was impressed with what I found. They were all unique, flavorful, and interesting creations with names like Woods Matevezza IPA, Woods Morpho, Woods Winter Thyme, and Woods Chowderhead Stout. I think there was a little something for every kind of beer drinker among the options. If you enjoy hoppy IPAs – the Matevezza, for a fruitier more floral brew – the Morpho, for citrusy beer with an herbal twist – the Winter Thyme. But, I found myself entranced and particularly drawn to the truly unusual Chowderhead Stout with its classically rich chocolatey stout notes altered by the inclusion of local Miyagi Oysters in the brew process. The oysters added an odd and pleasant oceany twinge of salinity to the profile that I really found both intriguing and enjoyable with every gulp. 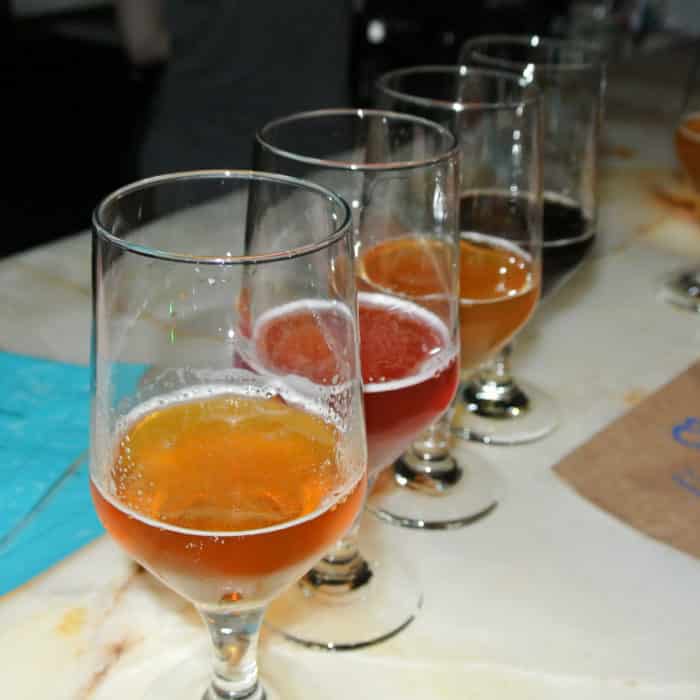 And who doesn’t love good cheap bar eats when their drinking? I think Woods Polk Station’s bar offerings are particularly unique and I’d happily sit down for one or two more of those awesome Argentinian El Porteño empanadas any day of the week. At $4 a pop, they’re an excellent deal. 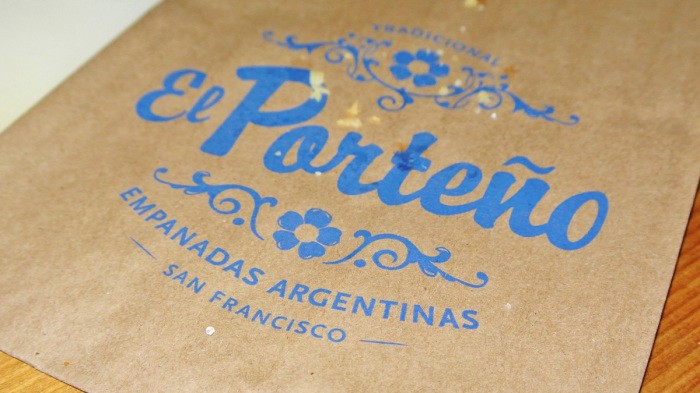 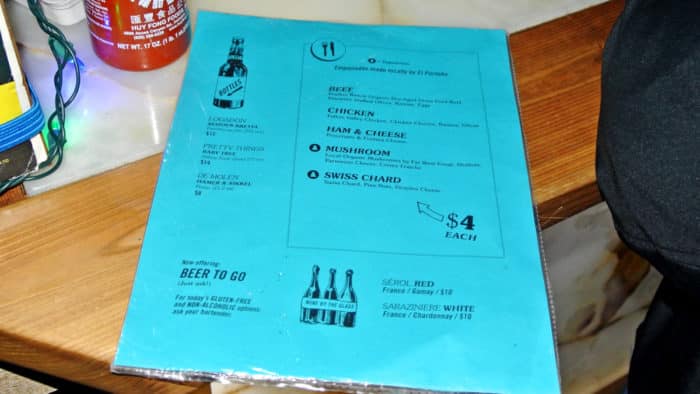 For my late-night meal I selected two of them, starting with the Beef Empanada. It had a wonderfully flaky puff-pastry crust and was fully-loaded with an interesting ground beef filling. They’re baked – not fried – but they’re still so buttery, flaky, and crispy that they will totally satisfy your late-night beer pairing desires.

In this one, there were some surprising twists to the mainly a savory treat’s flavor profile. There was a punch of sweetness due to the inclusion of raisins and a pang saltiness from the slices of green olive. I think this is actually a common Latin American combination of ingredients usually referred to as Picadillo, but I was totally caught off-guard by those flavors when I bit in to my savory pastry. Very tasty, yes, but I almost would have preferred it without the raisins and olives. 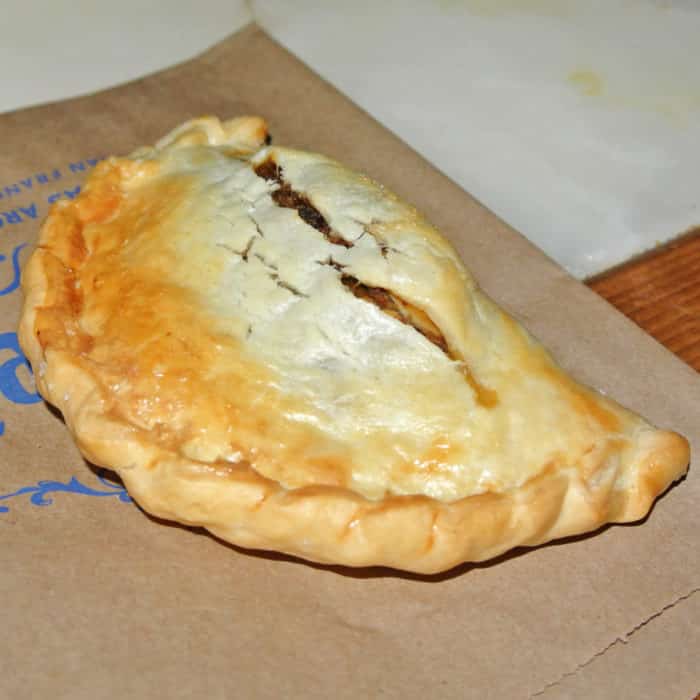 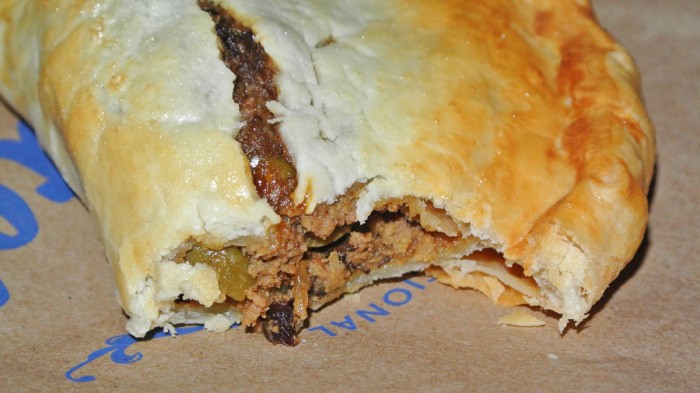 Actually, I ended up preferring one of their vegetarian options over the beef – the Mushroom Empanada. It was boldly in-your-face with aggressive, mushroomy funk. I loved how intensely earthy these mushrooms tasted and how they melded with the parmesan and creme fraiche filling. Even the texture of the mushrooms was really excellent – they had an almost meaty quality.

A glance at the menu and I learned that they sourced the mushrooms from the fantastic Ferry Building vendor Far West Fungi, who I already knew and loved for their truffle honey mustard (something you also need to try) that I keep on hand at home. So, I guess I shouldn’t have been so surprised that these tasted so incredibly good. For once in my life, I’d probably choose the vegetarian option over the meatier alternative! 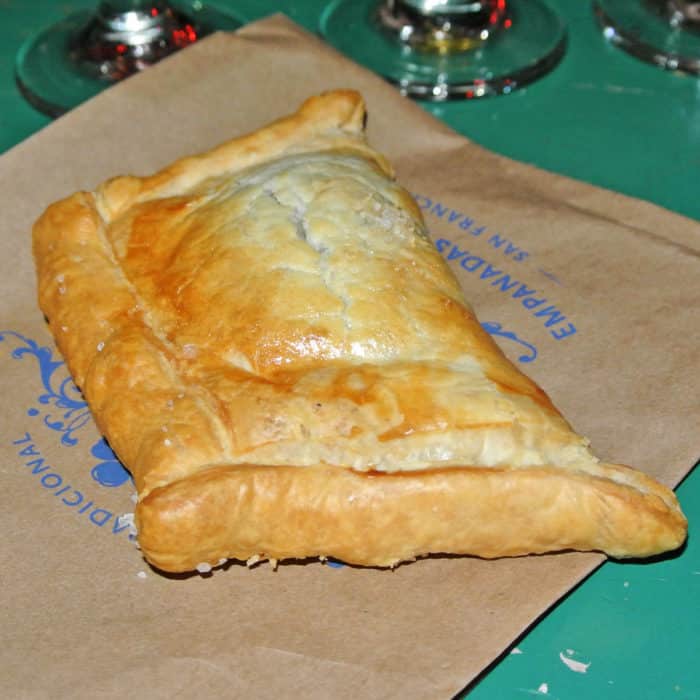 So, I was more than thrilled with my experience at Woods Polk Station. I’d say that it’s a great spot for a change of pace from the generally rowdy Polk Street bar scene when you’re looking for great beer and some serious, cheap bar bites. This mellow, cozy spot and their Argentinian empanada are definitely going to become a regular go-to for me. Yeah, I’ll be back and often.

Know of another great bar serving killing bar bites in SF? Let me know in the comments below.