I’d never thought to go to Tartinery in Nolita before, but I’ll be damned if that place wasn’t an absolutely perfect spot for an impressive first date. You wouldn’t know it from the street, but inside the understated exterior of this restaurant there’s an incredibly sexy, well-thought-out, subterranean dining room with large vaulted ceilings with exposed brick walls accented by lots of black iron and flickering candle lights. It’s a really incredible space and if you’re looking to put the vibe in the air, this place is perfect for that.

The menu is also great for two people getting to know each other. It features a vast array of French-inspired open-faced sandwiches known as tartines. And there’s a wide selection of very accessible toppings offered – so you know that picky eater Tinder first date is going to be able to find something they can eat – yes, even vegetarians.

On this evening, I was not on date night, but was instead out to dinner with my family while I was back in town for a quick trip. Since we were a table of five, I was able to sample a large number of their offerings while we split and shared them all between us. These sandwiches were each cut into around six pieces, so sharing family style is quite easy to do. Every dish was beautifully plated and I think in actuality a single person could fill up with just a soup, salad, or appetizer along with a single tartine. 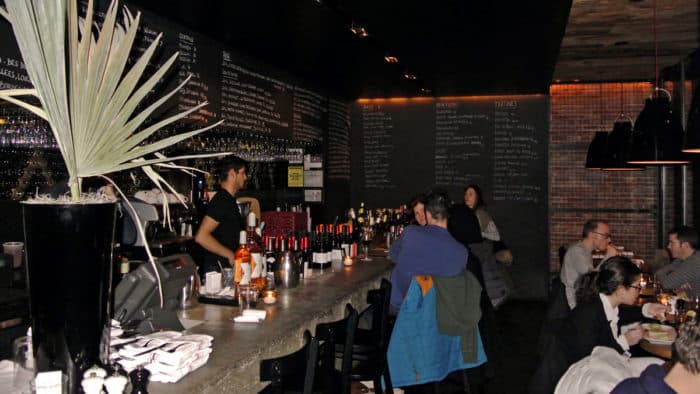 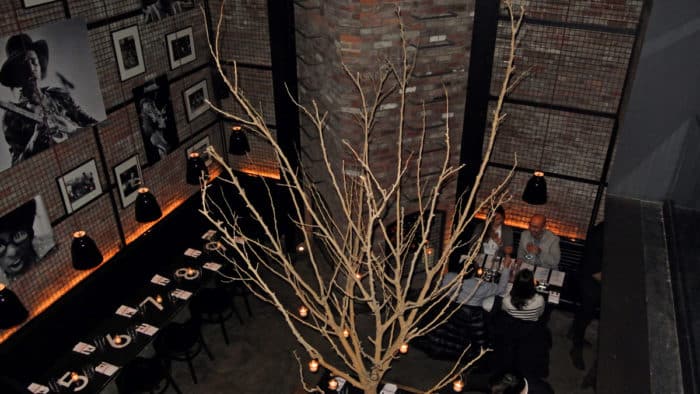 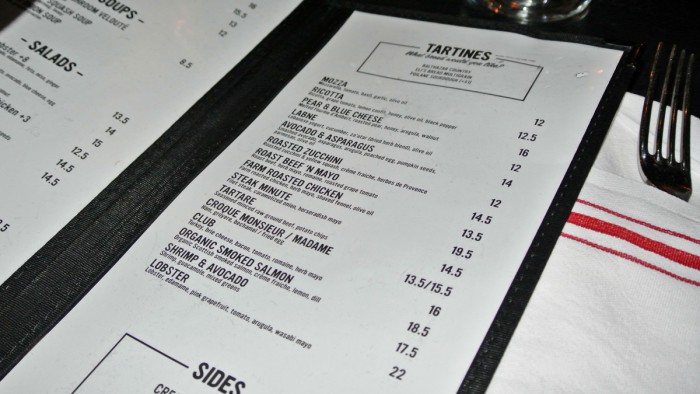 Since Tartine is heavily French-influenced, Amy and I started our meal off with a bowl of their French Onion Soup. In general, I’m a big fan of a good French Onion Soup and this version had all of the visual makings of an excellent one.

But, beneath the thick, cheesy surface crust, I found the a broth that was too light on that rich caramelized onion flavor I look for and it lacked the plump mass of broth soaked bread I expect to find sunk in there. Sure, we dunked the included whole grain toast slices into the broth after, but I don’t really think that’s the same. This was a pleasant starter, but I’ve certainly had better renditions of this usually savory and satisfying soup elsewhere. 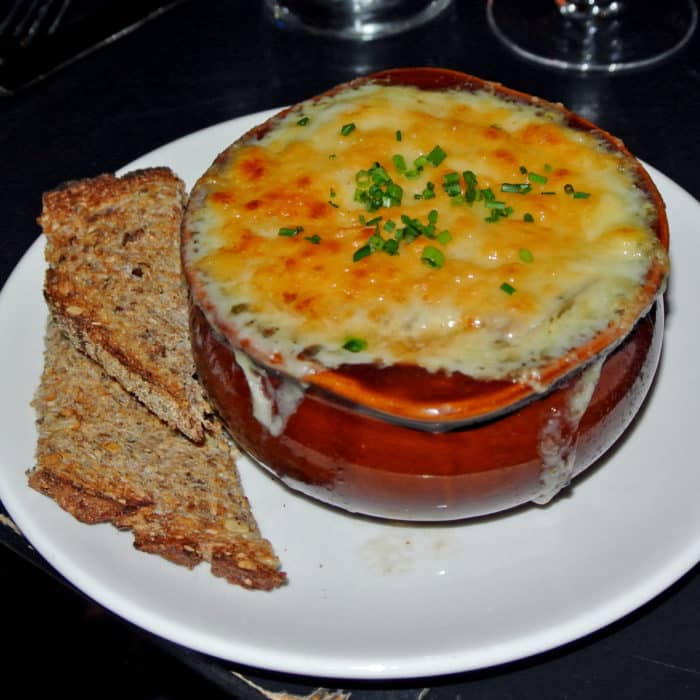 After that, the parade of tartines began.

I started with a slice of the Ricotta Tartine which came topped with fresh ricotta, grape tomato, lemon confit, honey, olive oil, and black pepper. While all of those ingredients did indeed sound like they would work well together and be delicious, we all felt that this open-faced sandwich was too mildly flavored and ended up tasting bland. In my opinion, they really needed to kick the level of flavorful complexity up a notch to make this work and actually be exciting. 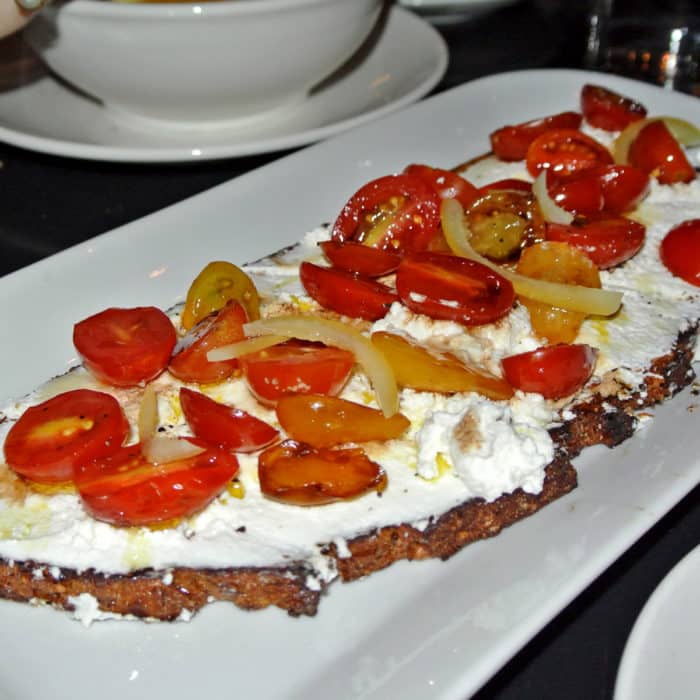 The next tartine I dug into was the one that I specifically selected for our table. I chose the Tartare Tartine because I happen to love beef tartare and I felt that a French-inspired joint such as this should be able to execute it quite well. But, what came to our table was nothing like what I had hoped for or expected.

Described simply as including seasoned minced raw beef and potato chips, I was shocked to find that the beef was massacred beyond recognition and arrived whipped into a mayo-laden paste. It was quite citrusy and very in-your-face. Really, I think it was just completely overworked.

I was hoping it would be much closer to a more simple and traditional treatment of tartare with raw hand-diced beef dressed with just a touch of seasoning and perhaps the usual accompaniments of minced red onion, capers, and Dijon mustard. But, this version completely hid the main ingredient it was supposed to be highlighting. If you love beef tartare, skip this one because you’ll only find disappointment.

Now, when I’m dining out in NYC, I tend to skip over and not order the generally overpriced dishes that feature lobster (though I’ve found exceptions to the rule). But, my sister selected the Lobster Tartine and this fancy, lobster-based dish really did deliver and impress. It came topped with edamame, pink grapefruit, tomato, arugula, wasabi mayo, and a generous portion of lobster that included four large claw hunks.

I know this dish sounds like it had a whole hell of a lot going on – and it did, but this complicated combination really did work quite well. And the portion of lobster was really impressive. I loved how the sweet lobster meat played with the snappy edamame, wasabi spice, and bright grapefruit citrus. Somehow it all worked together really well and came together excellently. 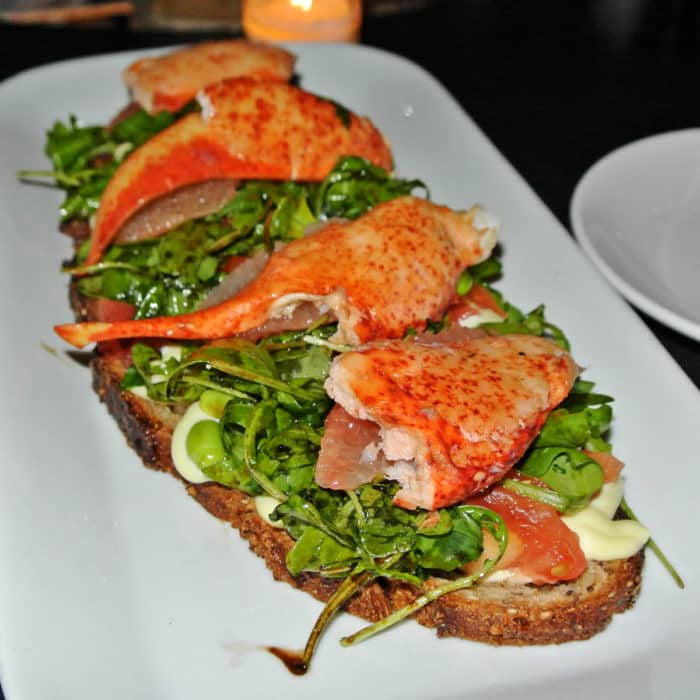 And as an ex-New Yorker, Jew, and longtime fan of lox, I was excited to also give their Organic Smoked Salmon Tartine a shot. I’ve already spent a lot of time on here griping about my lack of quality lox (and bagels) on the West Coast, so this was a special treat for me.

This sandwich came topped simply with a classic combination of Organic Scottish Smoked Salmon, creme fraiche, lemon, and dill. It was a very nice nod to the traditional bagel and schmear preparation and it really allowed the quality of the smokey sliced salmon shine to its fullest. All it took was a touch of squeezed lemon juice and it was perfect. 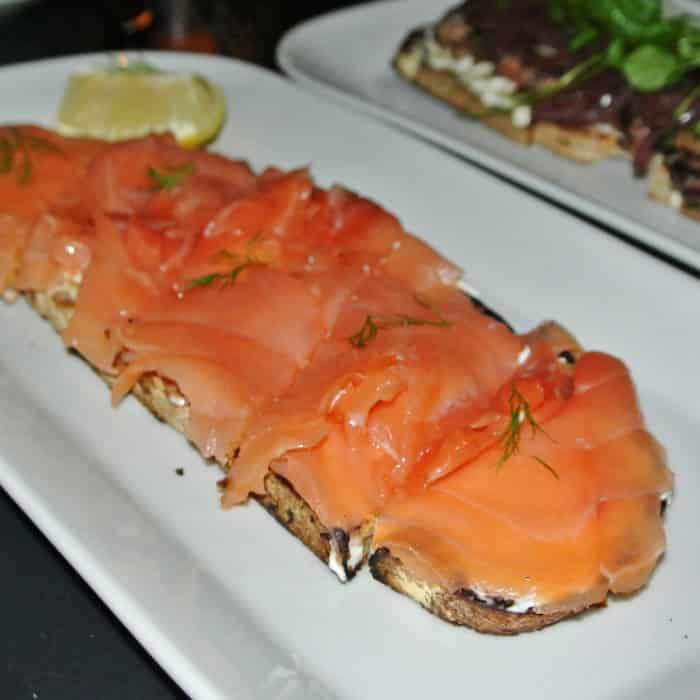 And the final sandwich of the meal was the Steak Minute Tartine. I’m not sure why, but when I had originally looked over the menu and read its ingredients which included filet steak, caramelized onion, and horseradish mayo – it wasn’t really speaking to me. But, I’m happy to tell you that I was completely wrong about my gut feeling on this one. In fact, this was probably my favorite tartine of the night.

It had a real classic New York sliced steak sandwich flavor profile and the three ingredients really melded together nicely in every bite. I’m not the biggest fan of horseradish, but in this preparation it was present and managed to not overwhelm the dish. There was just a really nice balance of flavors and textures in this one that I enjoyed a lot. 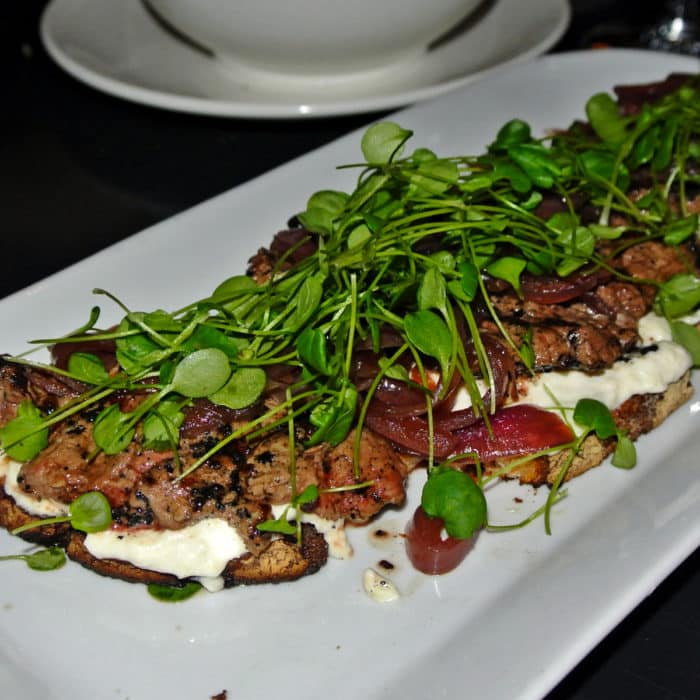 So, while I found the menu to be a little hit-or-miss and the prices to be a little high, I still think that the sexy atmosphere and very flexible and accessible menu makes it an outstanding first or second date spot in NYC. The Tartare Tartine was definitely the biggest miss of the night and that was my mistake to make, but on the right occasion with the right picks, I think this place would serve an early date quite well.

Got another great date spot in NYC that I should check out next time I’m in town? Let me know in the comments below.