After heading over to San Francisco’s Chinatown to check out the Fortune Cookie Factory and Cable Car Museum, we figured it was probably worth exploring a bit more to find some fun and delicious snacks in the area. A quick search on Foursquare brought one place in particular to our attention – it was rated much much higher than anything else in the neighborhood – a little pastry shop called Golden Gate Bakery. Literally every tip at this place was ecstatic about their Egg Custard Tarts so we sort of had to try it while we were in the area.

As soon as we rounded the corner towards the shop, we spotted it – a 15-20 person line snaking into the street. Now, I’ve never been one to wait in lines for really anything, but since this was a take-out only shop serving pre-made pastries, we figured it would probably flow pretty quickly. And it did. Only around 5 or 10 minutes later we found ourselves inside the shop and on the spot attempting to place our order before exiting the shop with our goods. 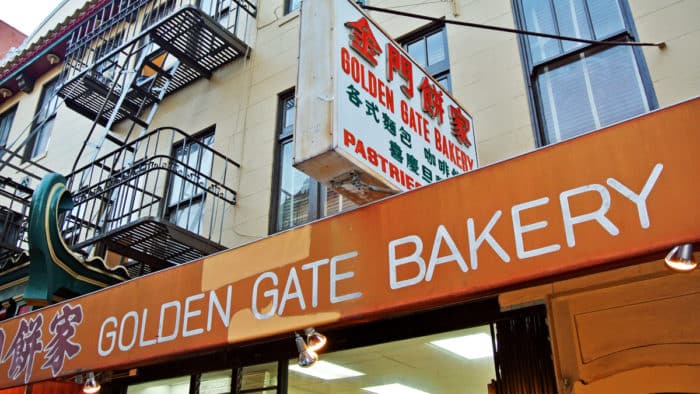 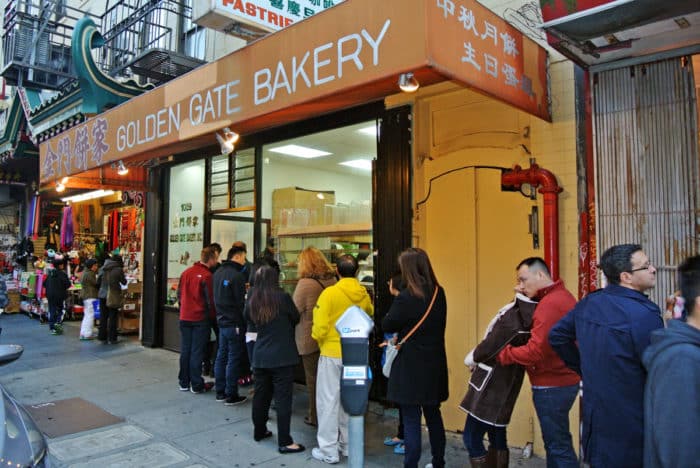 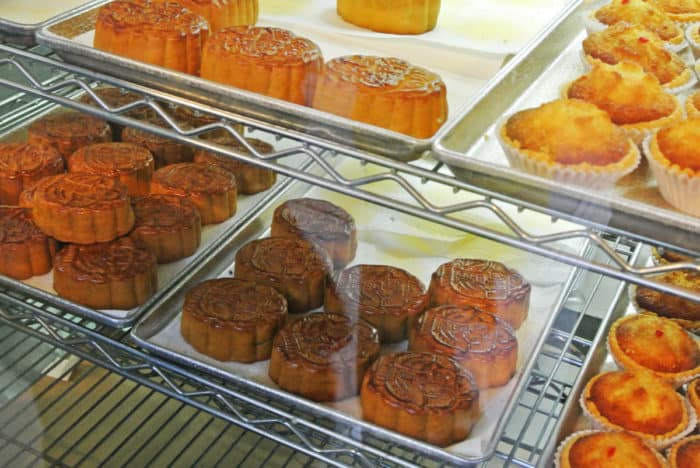 We knew we had to get an Egg Custard Tart. Based on the online tips, that was non-negotiable. The one we were handed came fresh out of the oven and it cost us a mere $1.25. Now that’s a killer deal. I’ve actually eaten many egg tarts before, mostly at gigantic Dim Sum parlors with rolling carts, but this rendition was completely different than I had ever experienced before. Surprisingly, when I bit in, I found that this one wasn’t remotely sweet at – nothing like I had become accustomed to expect. This was so much better than the vastly inferior egg tarts I’d grown used to.

The pie crust was light, flaky, and buttery. And the fluffy, jiggly, custard-like egg that filled the interior of the tart was somehow both hefty to the touch and light-as-can-be in the mouth. The filling was VERY eggy compared to overly-sweetened, gluey masses that I’ve become accustomed to with other egg tarts. And to be honest, I much prefer this incredibly fresh, savory version. And at only $1.25 for the substantial-sized pastry, I’d say this is a must-have in SF. 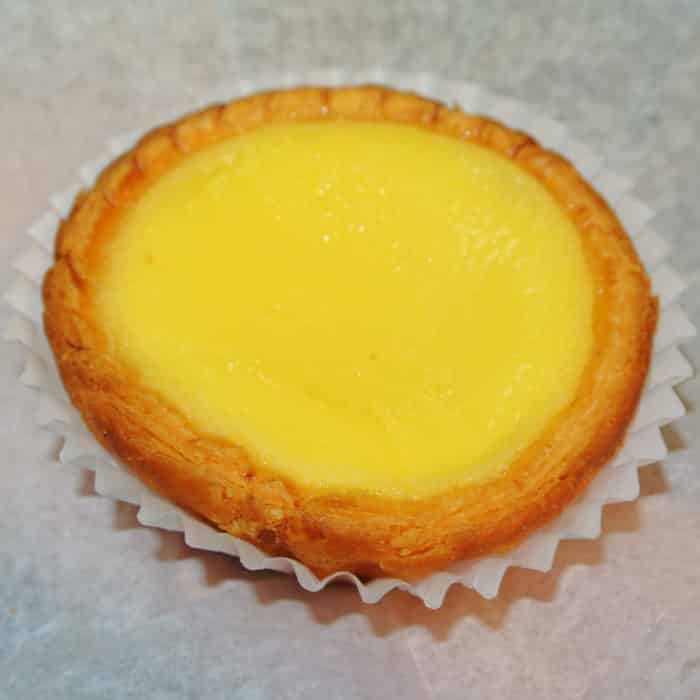 And since we had already waited in line, we figured that we should at least try one more item for our efforts. After spotting the array of magnificently decorative Mooncakes displayed in the front window, we figured that’s what we’d have to get. Little did we know, there was an incredible variety of Mooncake fillings being offered and under the pressure of the front-of-the-line spot we impulsively selected the Black Bean Paste Mooncake. You know how much this freaking thing cost? $7.15!! Holy crap, talk about sticker shock – especially after learning that the Egg Custard Tart only cost $1.25. Welp, it was too late now, there was no turning back. See ya later Alexander Hamilton.

Now, there’s no denying that this thing was beautiful. The golden brown embellishments were absolutely gorgeous and the dense, compact creation weighed a massive amount for its relative small proportions. Upon biting in, we found that the interior was filled with an extraordinarily dense, dark, purple-brown paste. I’ve had black bean paste filled Asian pastries before and I never seem to really love it, but I actually do want to learn appreciate it so I just keep trying – in vain. I’m sure this was a really good version, but I’m fairly convinced that black bean paste pastries just aren’t for me.

Deep inside the heart of this unusual pastry, there was a large, funky tasting golden-orange nugget of some sort that I thought at the time may have been candied yam. It wasn’t – I later learned that it was a salted duck egg yolk. By looks alone, I thought that it was going to add some sweetness to the whole thing, but it was just another bizarre element adding saltiness and other strange flavors to the already truly confusing dish. Apparently, it’s a symbolic gesture to represent the full moon, but I just found it unpleasant. In fact, I got little to no pleasure from each passing bite of this pricey pastry, so after only getting halfway through it, I gave up trying, quit attempting to enjoy it, and tossed it in the trash. Bummer. 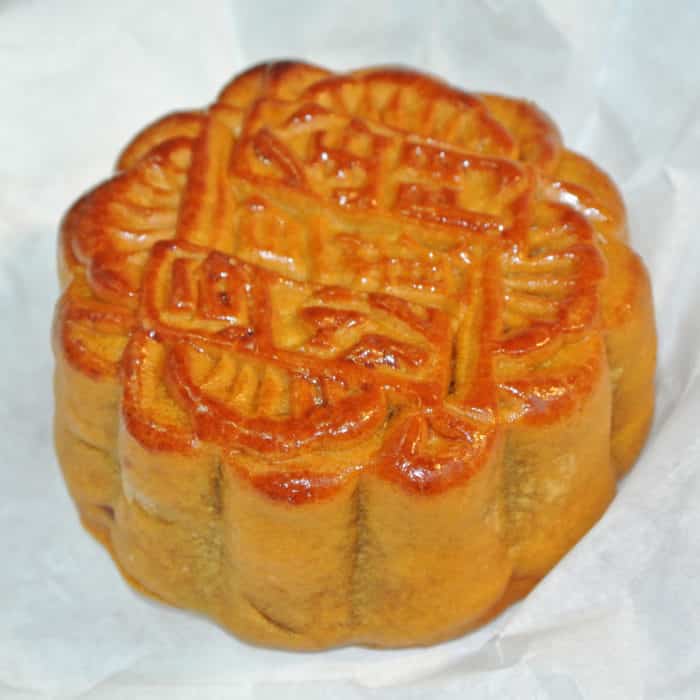 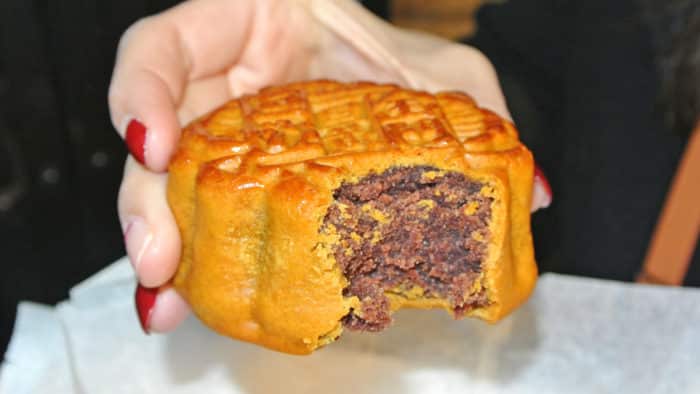 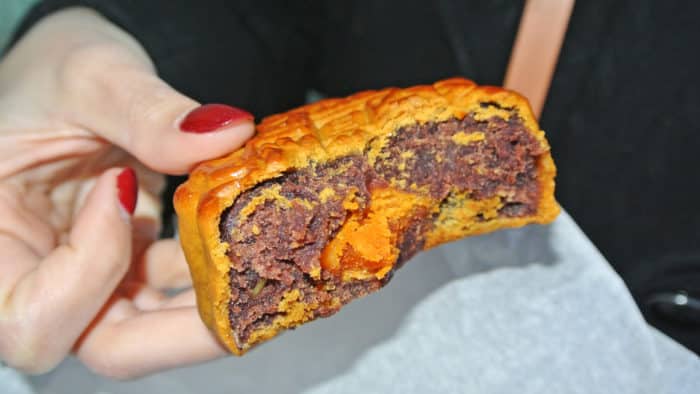 So, even though their Mooncakes are probably excellent, I don’t think I’m a fan of the festive dish and wouldn’t necessarily recommend ordering one unless you really do love them. Instead, I’d double up on the truly outstanding and cheap Egg Custard Tarts which totally lived up to their line-deserving reputation.

With that being said, I’m having such a hard time rating this place because the Egg Custard Tarts were incredible and stupid-cheap and the Mooncakes were just stupid. (OK, I’m definitely going to offend someone with that line.) I think I’ll just give the place the benefit of the doubt and score based on the Egg Custard Tart that I loved some much.

Got another interesting SF Chinatown spot that I should check out? Let me know in the comments below.