For this meal, we reserved two seats at the chef’s counter where we could watch over the numerous young, tattooed, t-shirt-wearing hipster chefs doing their thing. I always love eating this way because you sort of get a show while you’re eating and get to see how every single dish is put together.

The restaurant was on the small side for Austin, but that really allows the staff to provide very good, attentive service to all of their diners during their meal. The place has a sort of upscale, rustic wine cellar and Southern kitchen vibe with wood beams, stone walls, and pickling mason jars dominating the decor. As I would soon learn, the decor perfectly matched the style of meticulously plated, but seriously Southern-influenced food I was about to experience. 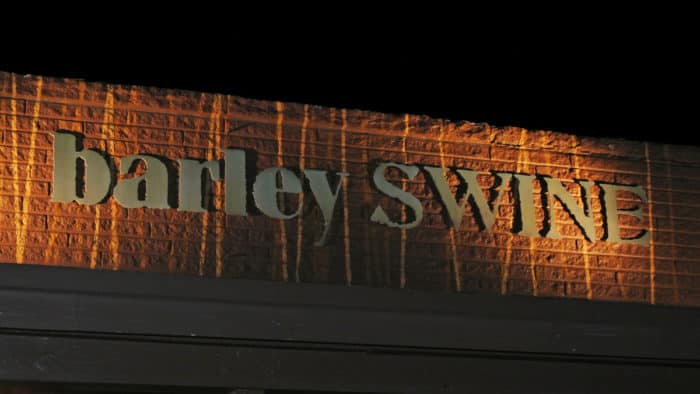 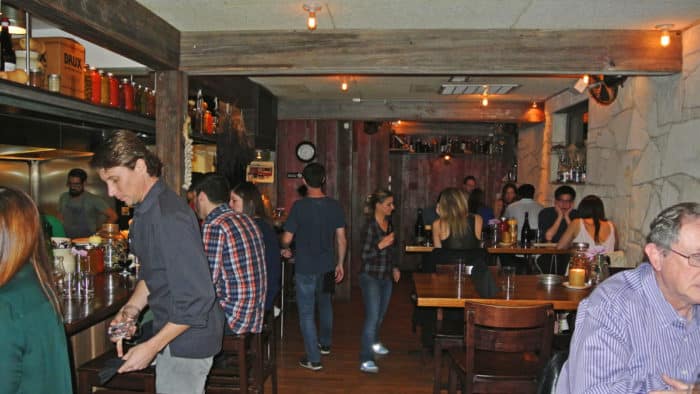 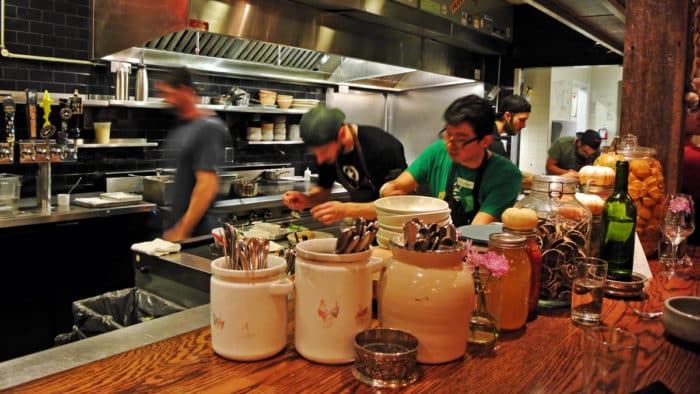 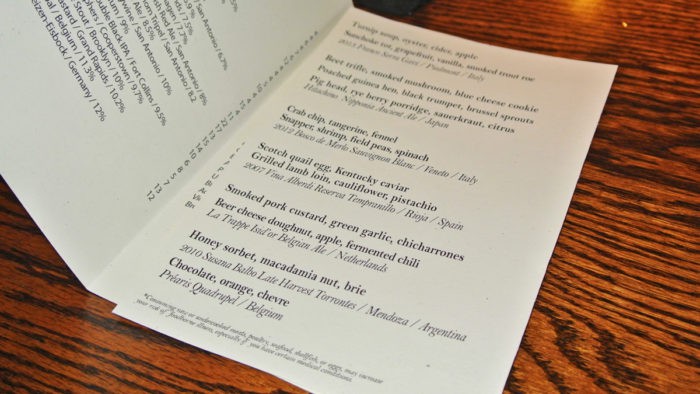 The Restaurant, Chef’s Counter, and Menu

Upon being seated, we were immediately presented with glasses of champagne – something they claim “they do” – which I followed up with a pick from their on-tap Texas beers.

Then the tasting menu began to arrive. It didn’t feel rushed, but each course arrived at a near break-neck pace. As soon as we had completed one dish it was immediately cleared from the counter and replaced with the next of our twelve – yes, twelve – courses. Buckle up, this is gonna be a long one. 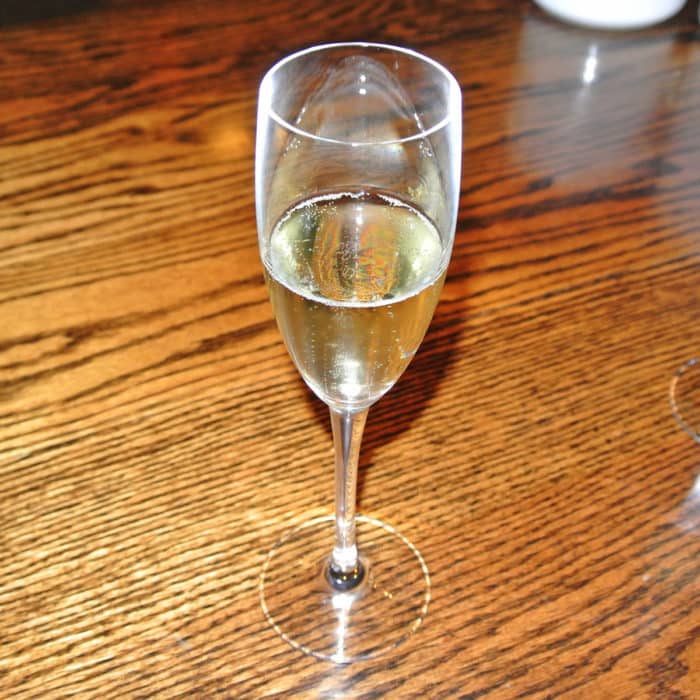 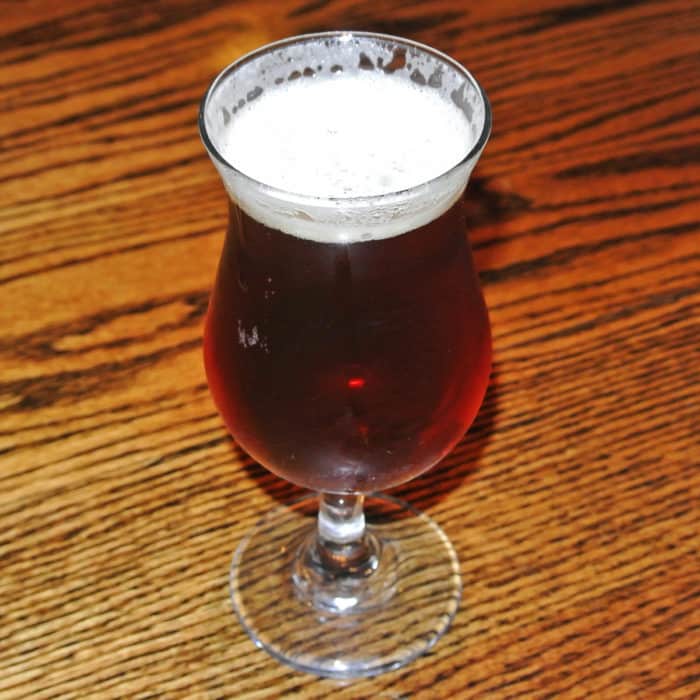 The first course to arrive was a Turnip Soup with Oysters, Cider, and Apple. Now, I’ve tried to cook with turnips at home before and I’ve never particularly cared for them, but this soup was ridiculously good, especially for being made of turnips. There was just so much going on inside of it. There was smokiness, saltiness, sweetness. It was hot, it was cold. And it was just amazing the way the crisp, sweet apple combined with the salty oysters and smooth, silky turnip flavors. 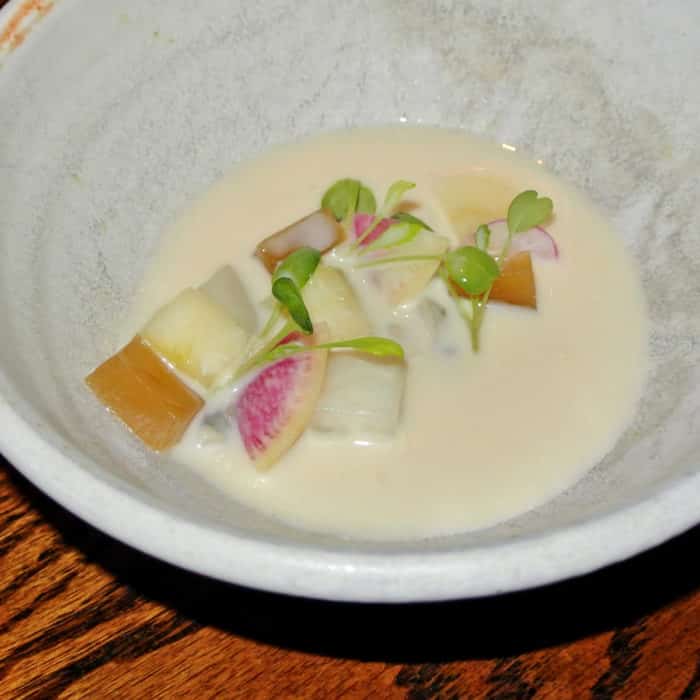 Next was a dish called Sunchoke Tot with Grapefruit, Vanilla, and Smoked Trout Roe. This was like the best tater tot I’ve ever eaten. The golden brown cube was fresh out the fryer – perfectly crispy with a shredded potato-like texture from the sunchoke, a brightness from the grapefruit, a twinge of sweetness from the vanilla, and a subtle, salty, smokey edge from the roe. This was an outstanding single bite. 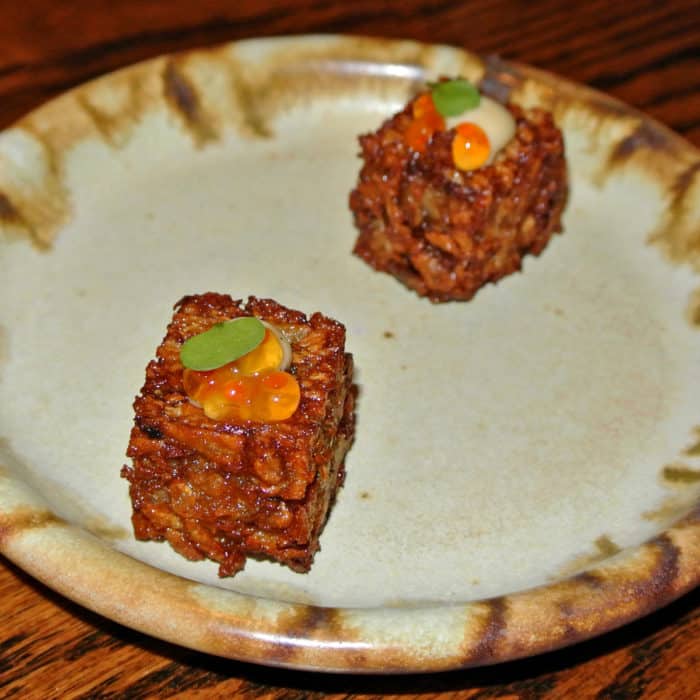 The next dish called Beef Trifle with Smoked Mushroom and Blue Cheese Cookie was totally freaking bizarre. It involved a tall glass filled with a neon pink-purple substance topped with tan cookies crumbles and a leafy green garnish.

It was foamy and light as air – strong on tart beet flavor at first, but completely balanced by the funky blue cheese back bite. Chewy, funky mushroom and cookie crumbles added necessary contrasting texture to the otherwise textureless dish. This was certainly one of the stranger dishes I’ve ever eaten, but I think it worked – somehow. 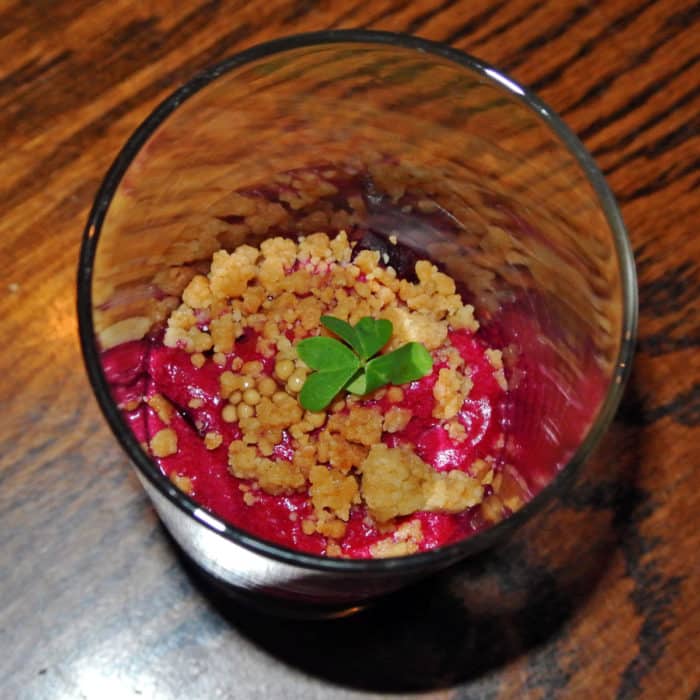 Up after that was the Poached Guinea Hen with Black Trumpet, Brussels Sprouts. This pretty, little plate included two separate cuts of Guinea hen – light meat and dark meat along with shredded Brussels sprouts, pickled black trumpet mushroom broth, and a chicharrón topping.

I definitely preferred the Guinea hen dark meat over the breast which felt and tasted a lot like turkey breast. But, all of the meat was incredibly tender and I loved the way the bright, pickled mushroom broth and crispy chicharrón played together with the hen. 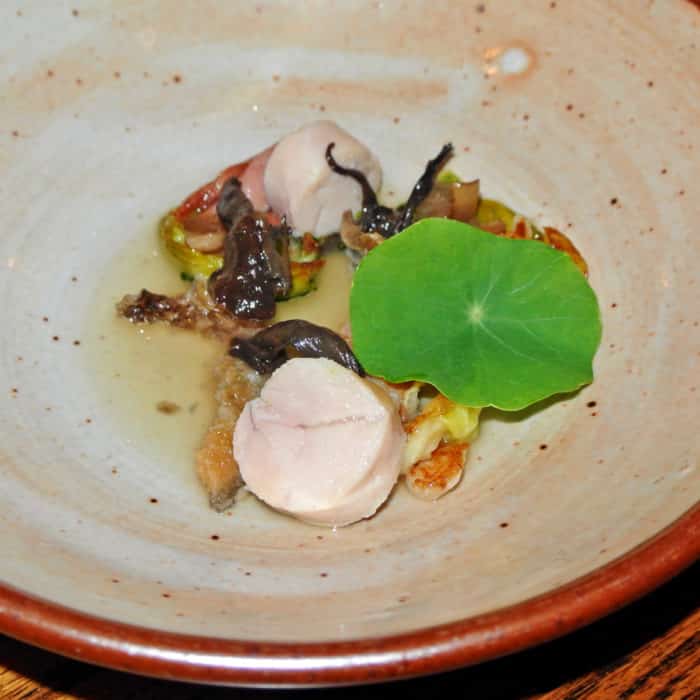 Then came a dish I was immediately excited about based solely on the list of ingredients used – Pig Head with Rye Berry Porridge, Sauerkraut, Citrus. This dish wasn’t much to look at because, well, that sliced pig head was rather unattractive, but this dish was incredibly delicious.

The smokey, fatty pork combined with the creamy, nutty rye berry risotto so incredibly well and the sour elements added a nice twist to the dish. Again with the sour, pickled notes – that seems to be a trend here. 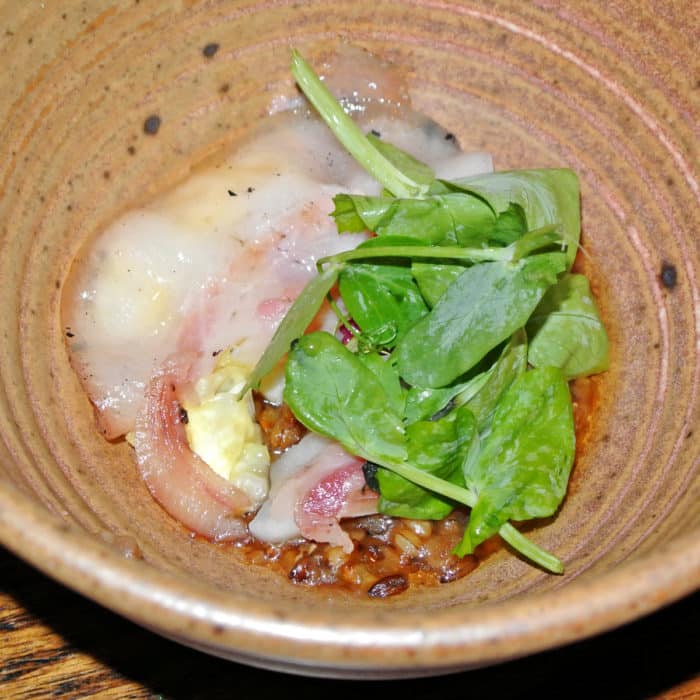 Next was the Crab Chip with Tangerine and Fennel. At first I thought the base of this dish was made of crispy chicharrón, but I quickly realized that it was probably a crab-flavored chip like the ones I often find in bags at Asian groceries.

The crispy, airy, fried chip served as an excellent vessel to feature the gorgeously tweezer-assembled toppings that included tangerine, fennel, crab meat, and edible flowers. This was another very creative and tasty bite. I loved the way the bright tangerine flavor interplayed with the lightly salty-sweet crab meat. It also had such a nice textural and flavor contrast throughout. 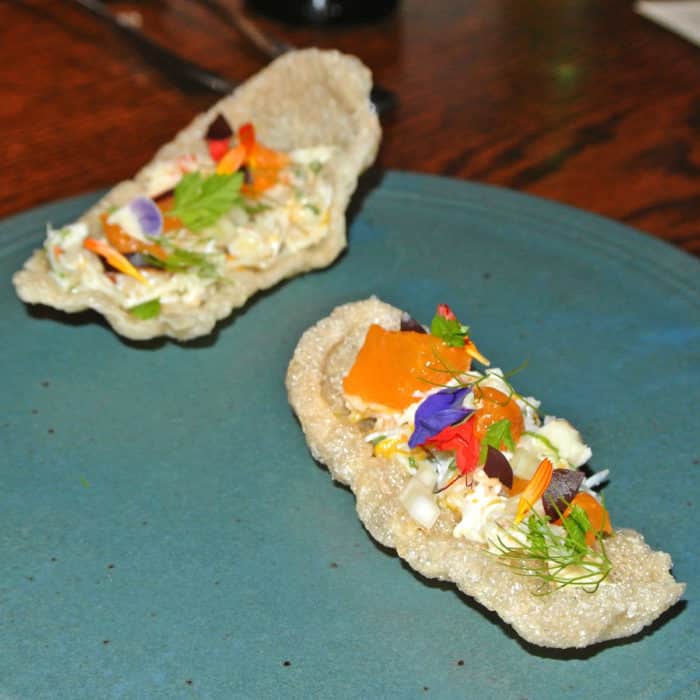 Onward, we headed to a dish called Snapper, Shrimp, Field Peas, and Spinach. The shrimp in were absolutely killer. Their flavor and texture were just incredible – snappy, fresh, and flavorful. But, really every part of this course was delicious – especially the crispy dried and fried field peas and their pungent, sour, foam-topped broth. This dish came together as a whole so incredibly well. 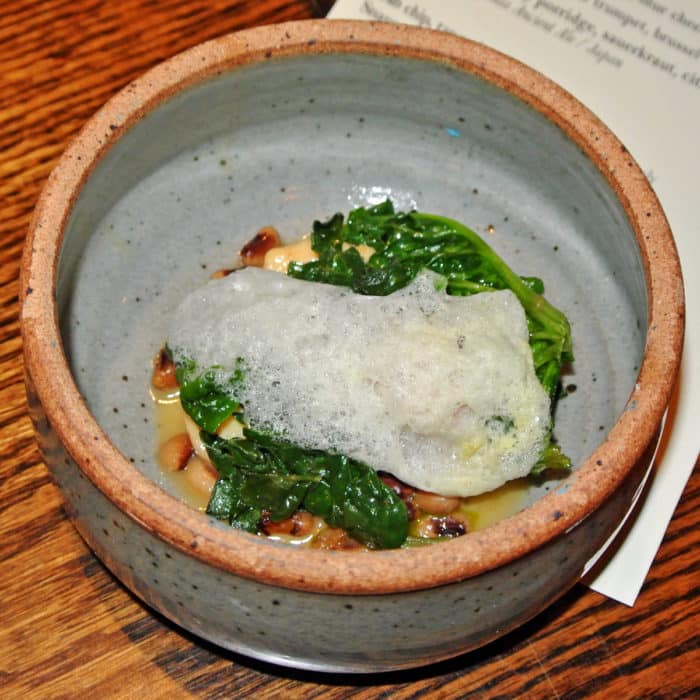 Then, it was time for the Scotch Quail Egg with Kentucky Caviar. I knew I was going to like the course from the moment I saw it on the menu. This little handheld dish ate kind of like an onion ring with an eggy richness and salty punch to amp up and elevate the bite. It was no-brainer delicious – an absolutely incredible single bite dish. 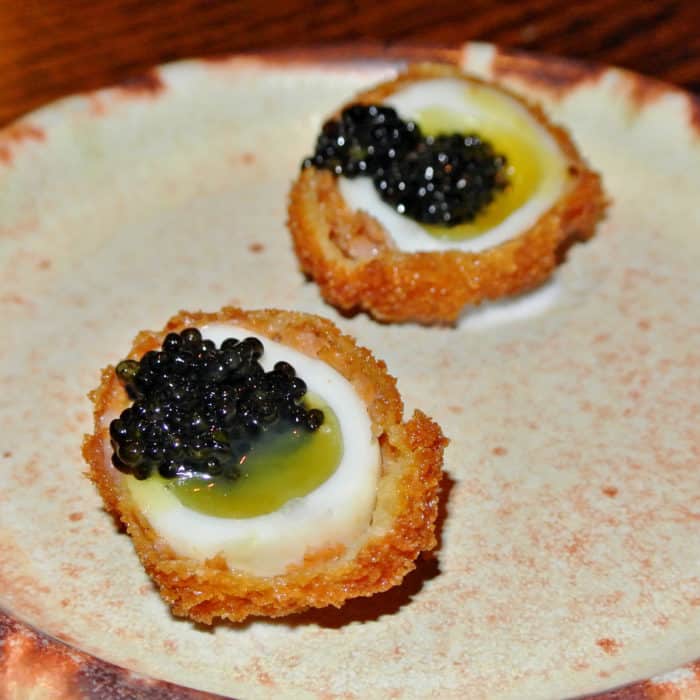 The next dish – Grilled Lamb Loin with Cauliflower and Pistachio – was arguably the most beautiful plating of the night. The lamb loin was absolutely delicious and very well cooked, but this dish was all about all of the other things adorning the plate.

They truly stole the show, especially that green pistachio nut butter smeared around the plate. That stuff was insane. I NEED to have more of that in my life. For the best eating experience, get a good mix of everything on the plate in each bite. This was another outstanding dish. 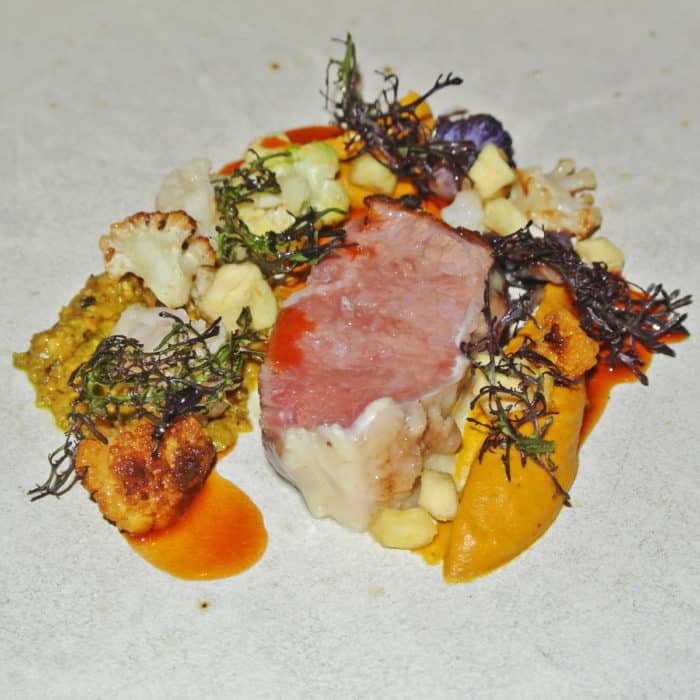 The next course was a really really strange one. It was called Smoked Pork Custard with Green Garlic, Chicharrónes and it was one of the more challenging thing I’ve ever eaten.

In order to enjoy this dish, you’ve just got wrap your head around consuming pork in custard form. The hot, jiggly substance was truly unusual and innovative, but I can see how this dish might not be for everyone. I, however, loved the way the creamy, porky, custard combined with the bright, green garlic punch and crispy, salty chicharrónes. It made for a dish that was both aggressively flavored and outstandingly original. 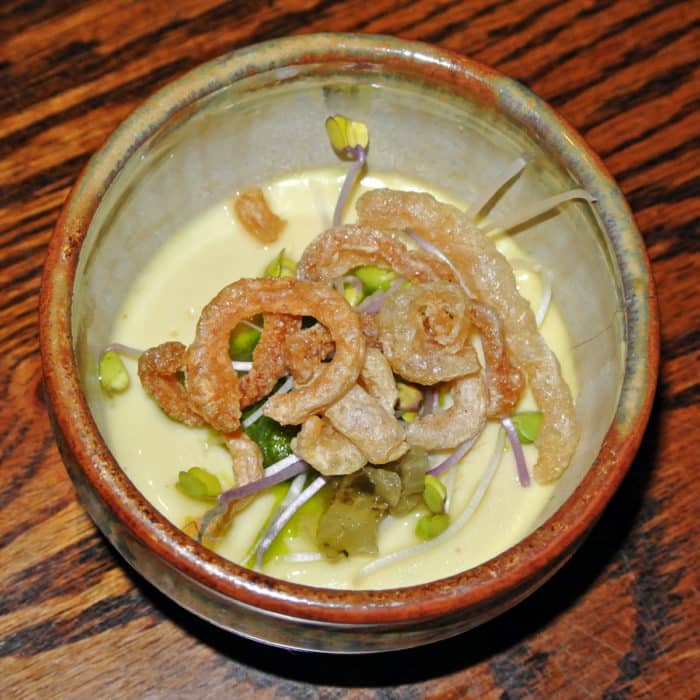 The next dish – Beer Cheese Doughnut with Apple, Fermented Chili – was the first of our numerous dessert courses and it was so far out there that I’m almost beyond the ability to put my thoughts into words.

It’s just so difficult to describe this crazy, savory dessert course, but if I must, I’d say that it was like a light, fluffy doughnut filled to the brim with hot, rich, funky beer cheese that was also coated in a sweet and sour chicken sauce glaze and was aggressively topped with a sprinkling of powdered pork fat. This wacked-out dish was crazy good and crazy weird. The pipping hot filling was cheesy and incredible and somehow that outrageous combination of flavors, textures, and ingredients came together in an impressive and cohesive manner. 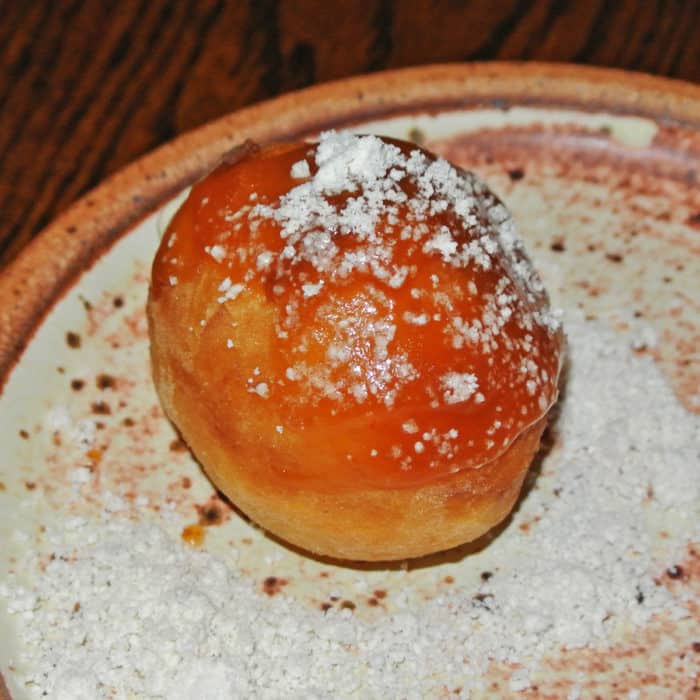 From there, we moved onto the first of our sweet desserts – Honey Sorbet with Macadamia Nut, Brie. This was another funny dish that worked miraculously well. The honey sorbet was ice cold and refreshing and the crumbled macadamia nuts and tuile cookie added textural contrast. But, that plume of brie foam really brought this strange, inventive dish together. There was a real fullness and richness to the cheesy flavor of that foam that brought the entire dish to another level of deliciousness. 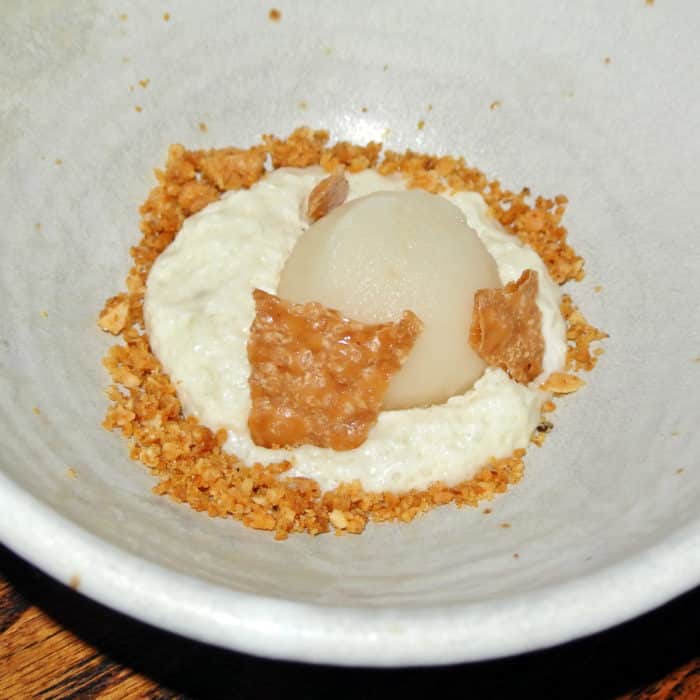 Then came another dessert called Chocolate with Orange and Chevre. As you’ve probably already noticed, Barley Swine likes to use cheese to contort the flavors of desserts.

This dish involved dense, moist chocolate cake-like nuggets made with goat cheese served over a couple of chocolate smears. There was an outstanding fudginess to the dish and the bright orange citrus notes balanced the rich, creamy, cheesiness of the chevre and chocolate nicely. This was another killer dessert. 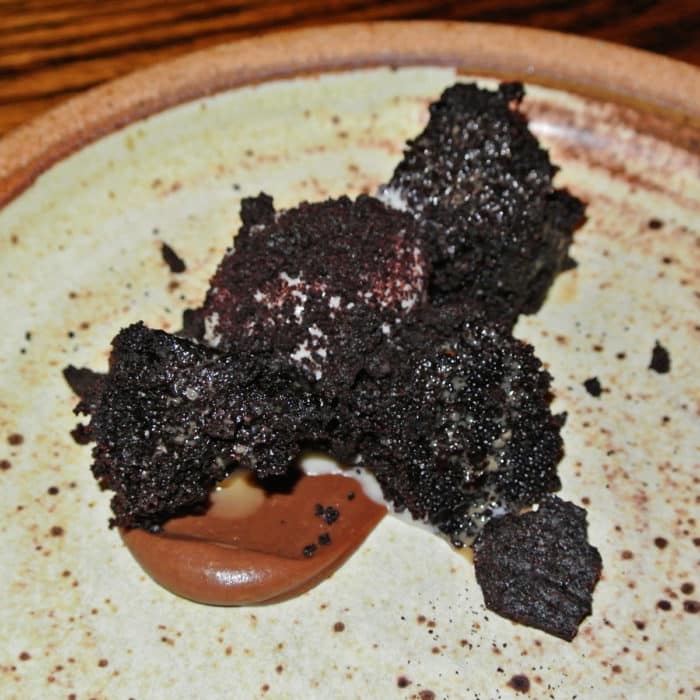 And to close out the meal, two final little bites – Basil Cookies and Blondie Bites. The mini basil cookies were herby, savory, and very salty. They were an interesting, snappy little bite that I appreciated, but didn’t wholly love. But, that little blondie was the perfect bite to close out this over-the-top meal. It was ridiculously sticky, sweet, and caramelly – quite a nice way to conclude this insane tasting menu. 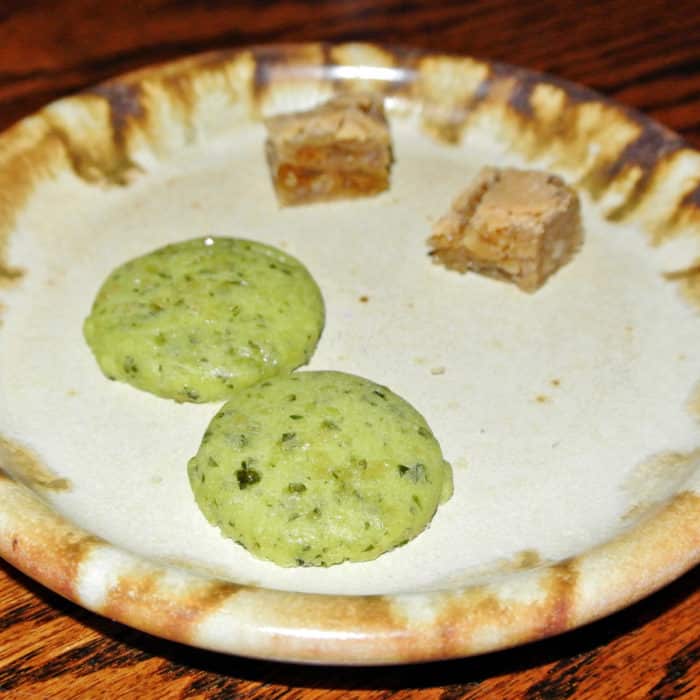 So, there you have it. Barley Swine served me an incredible, 12-course chef’s table tasting menu with plenty of Southern Austin, Texas flair. I loved nearly everything that was served to me and even if there was a dish that I didn’t absolutely love, I appreciated the thought, skill, and cleverness put into it. Recurring themes I noticed: egg yolk, pickled vegetables, and cheesy desserts. Would I recommend going? Yes, absolutely.

Got another insane tasting menu I should check out next time I’m in Austin? Let me know in the comments below.