So, I’m back on my quest to find all of the comfort foods I used to rely on in NYC in the Bay Area. This journey’s mission: Soup Dumplings aka Xiao Long Bao and Hand-Pulled Noodles. I’d heard great things about the cheap, authentic, Bourdain-approved Chinese food at King of Noodles in the Inner Sunset so one hungover Sunday morning when that particular craving struck, I hoped in my car and headed over to check it out.

It’s located in a very residential part of town and I found that parking was pretty tough to come by. But, after a few laps around the neighboring streets I was able to successfully snag myself a spot. As it turned out, this place was located literally right across the street from my beloved hot dog and sausage purveyor – Underdog. (Yes, of course stopped in to pick some uncooked dogs to make for dinner later that night.)

But, I wasn’t in this part of town to eat sausages. I wanted noodles and dumplings so I headed into this unassuming Chinese restaurant just as I had planned to and got myself a seat at the bar counter. The shop itself was very no-frills with regards to decor and experience, but that’s fine by me. The staff constantly darted around the space and seemed to run the place at an unfathomably mad-dashed pace at all times. When I stopped in, the clientele was made up mostly by non-English speaking Chinese people (who likely live in the area) along with a few adventurous-eating white people (ahem, me) tossed into the mix.

It was sort of dingy inside the shop and nearly every wall displayed a hand-scrawled sign aggressively explaining their credit card policy (we only accept one card!!!!). But, as I know all too well, sometimes the roughest looking places serve up the tastiest food. As soon as I looked over the menu and saw the incredible looking dishes coming out of the kitchen, I knew I was in the right place. 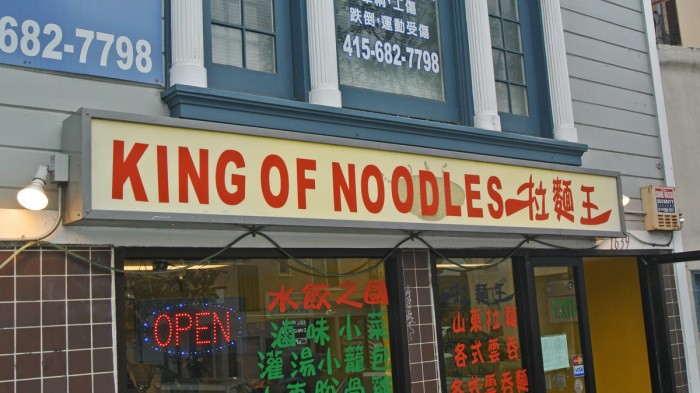 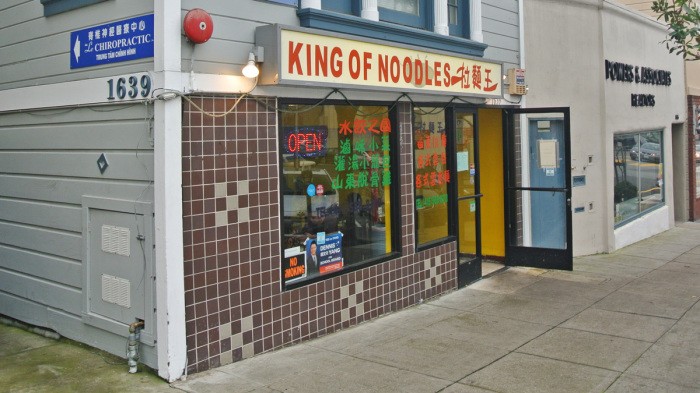 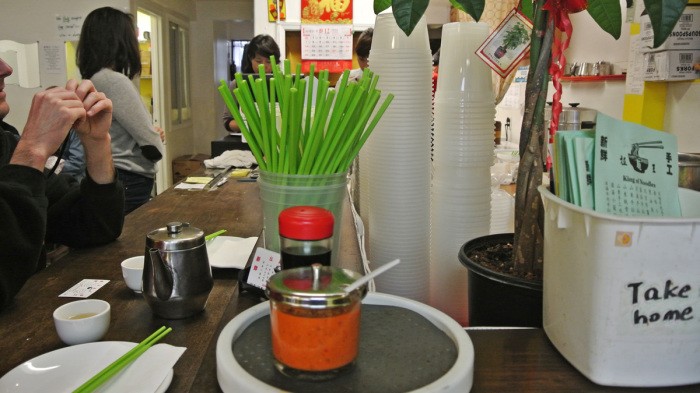 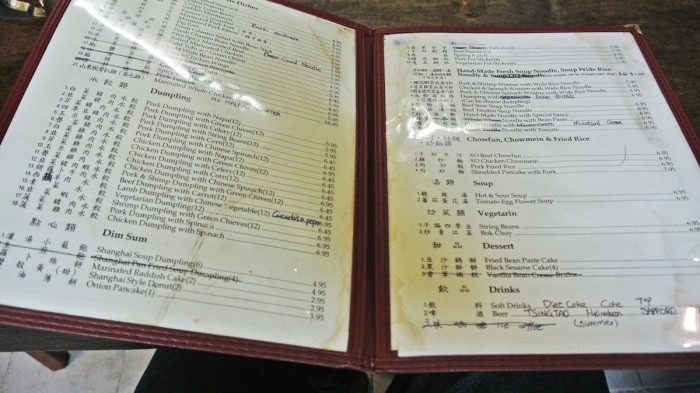 As soon as I was seated, the hurried server brought over a pot of hot black tea. It was standard Chinese black tea, but this stuff always seems to hit the spot and it served as an essential first step to eliminating the rather unpleasant hangover I had arrived with.

Then, very quickly the steaming bamboo basket of Shanghai Soup Dumplings (Xiao Long Bao) I had ordered was also brought out to me. I’ve got to admit – at first glance, I was concerned.

They were quite a lot smaller than the ones I had become obsessed with at Shanghai Asian Manor while living in New York, and I could instantly see that the skins had already been punctured. Both the broth and pork fat mixture were already spilling out before they were even presented to me. I had to act quickly and consume them all immediately before any more of their precious contents were lost to their apparently hasty construction.

To eat them, I stuck to my usual method. I transferred the first one to my wonton spoon and drizzled a little bit of Chinkiang black vinegar over top, nipped the skin, sucked out all of the juices inside, then consumed the whole thing. Rinse, recycle, repeat. The skins were a little bit thicker than I’m used to and there wasn’t as much broth as I would have liked either. But, the porky meatballs inside were meaty, juicy, and tender and really saved the sloppy dumplings for me. These weren’t the transcendent XLB I had been looking for, but they’ll certainly do for now until I can find truly excellent ones. 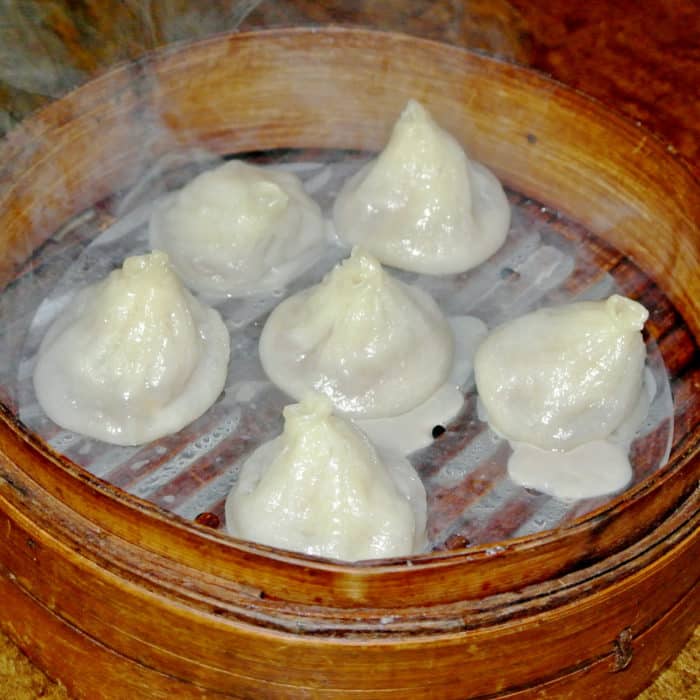 The Pork & Shrimp Wonton with Wide Rice Noodle Soup on the other hand was exactly what I was looking for. The gigantic bowl had a very clean and utterly soothing broth filled with sliced mushrooms and large plumes of snappy green bok choy. Using the table condiments, I doctored up the broth with a bit of red chile and soy sauce to open the flavors up a touch. It would have been perfectly fine before I did any doctoring too if I was looking for something milder, but I usually like my flavors bold. User Beware: a little bit of that chile sauce goes a LONG way.

But really, in this soup, the noodles and wontons were the real stars of the show. The irregularly shaped, long, slippery, wriggly, rice noodles were executed perfectly. I just couldn’t get enough of those chewy satisfying bites – that is, when I could manage to keep them from slipping off my wonton spoon. And the wontons were outstanding too. They were big, plump, thin-skinned, moist, and meaty. There was a ton of pork and shrimp flavor inside each one, just how I had hoped and expected to find them. This soup was a real winner. 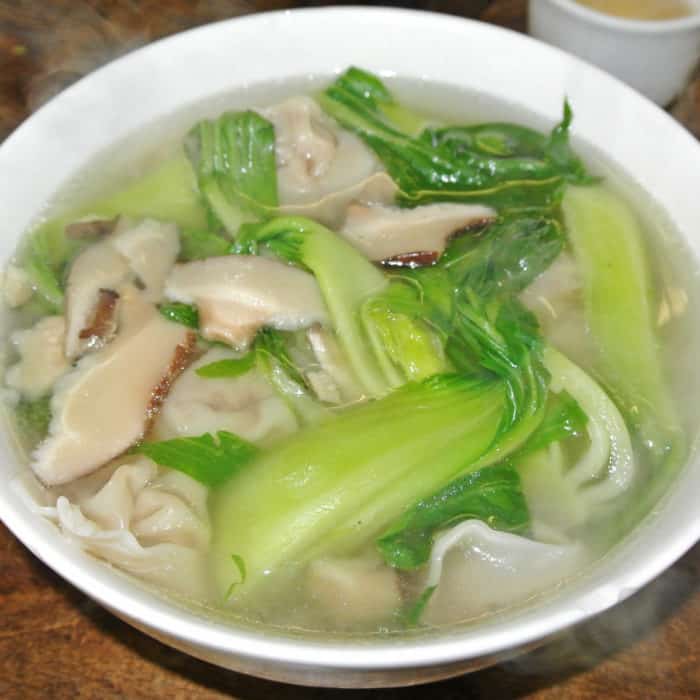 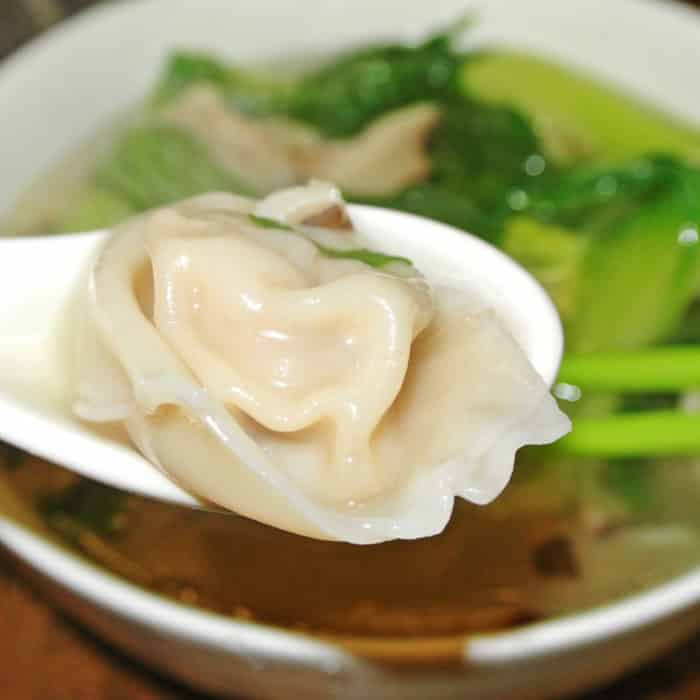 In conclusion, the Xiao Long Bao may have slightly missed the mark for me so I’d probably opt for one of the many awesome-looking steamed dumpling varieties I saw flying out of the kitchen instead on my next visit. But, the Hand-Pulled Noodles were outstanding and totally hit the spot. Simply put – they were super-cheap, super-filling, and super-good. Come for the dumplings, stay for the noodles!

Where else should I check out in the Bay Area for Xiao Long Bao and Hand-Pulled Noodles? Let me know in the comments below.

This Cozy, Neighborhood Cocktail Bar is Perfect at Any Time of Day