*Editor’s Note: I’m sad to report that this butcher shop is no longer open.

4505 Butcher Shop is a big deal in SF. Formerly an extremely popular farmers market stall, this brick-and-mortar shop functions primarily as a permanent place to purchase really high-quality meats for home use. But, beyond the gorgeous cuts of steak and other game meats sold, they also make a variety of awesome sausages and hot dogs in-house. In fact, I hear that’s really how they made their name and became so popular.

All of their hot dogs, sausages, and cuts of meat are made sustainably from animals raised locally in Northern California and come with a glowing reputation for being some of the very best butchery around. In fact, these days there are many bars and fine dining establishments that proudly serve 4505 bacon-studded hot dogs in a variety of fancy preparations.

4505 is actually located in a pretty scummy corner of The Mission. There’s lots of unpleasantries on those nearby streets that I don’t exactly love walking through. But, for 4505 it’s worth it. Amongst the messy, chaotic Mission streets, 4505 serves as a beacon of gentrification and hope with their clean, modern, and hipsterized aesthetic. Really, a lot of elements about this place remind me of the equally as excellent and off-the-beaten path NY butcher, The Meat Hook.

But, the reason I was headed to 4505 on that sunny Saturday morning was to try one of their unique sounding sandwiches designed to be eaten right there in store. Not to be outdone by the many places around town, they’ve created their own fancy hot dog riffs and I knew I had to have one. 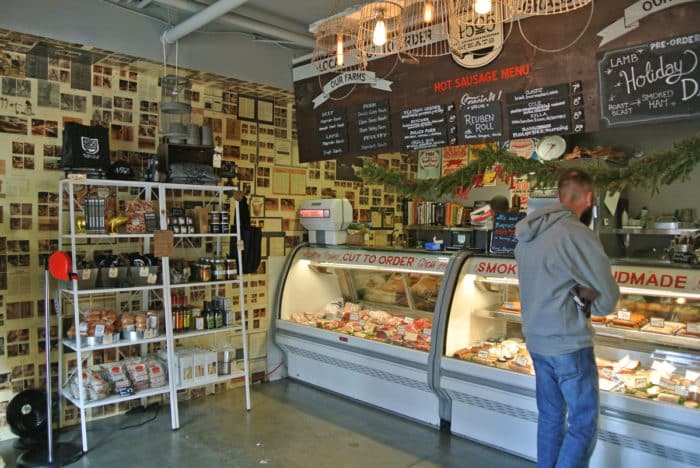 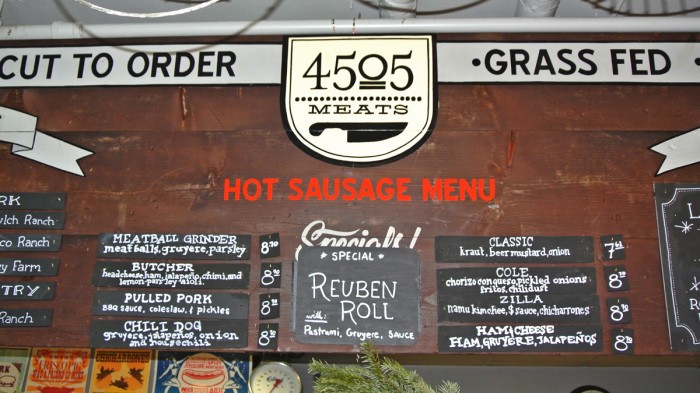 The Place and the Menu

The Zilla is the most well-known of the bunch, so I pretty much knew before arriving that I was going to give one of those a shot. The Zilla involves taking one of their famed bacon-studded hot dogs and topping it with the unusual combination of kimchi (made by Namu Gaji‘s co-owner Dennis Lee), something called “$ Sauce”, green onion, and a generous sprinkling of their now famous light-as-air chicharrónes.

Unsurprisingly, the famed hot dog was delicious – though all of the elements were much more subdued than I expected. Honestly, the tameness really allowed the quality and fully-flavored taste of the meat to shine. And the other elements seemed to be mostly there to add more of a textural contrast to the dish than boost it with an aggressive kick of flavor. So, still delicious – but, milder than I thought it would be. 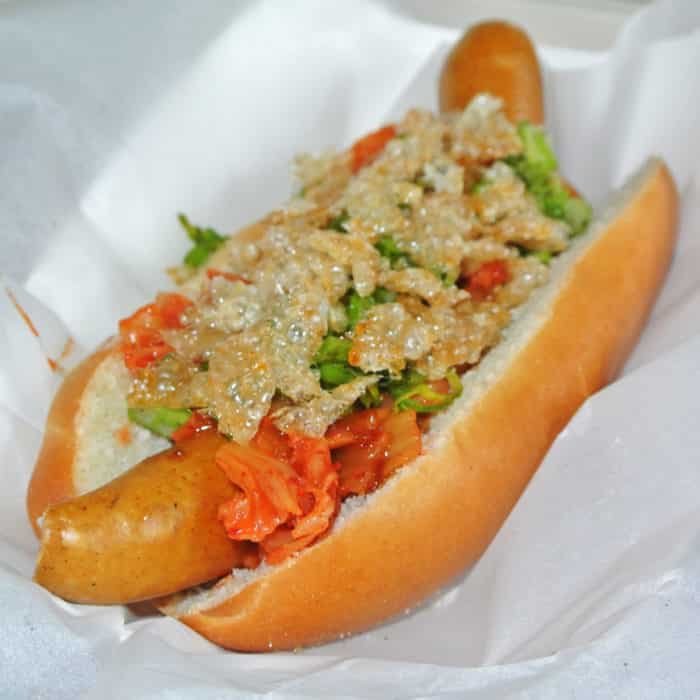 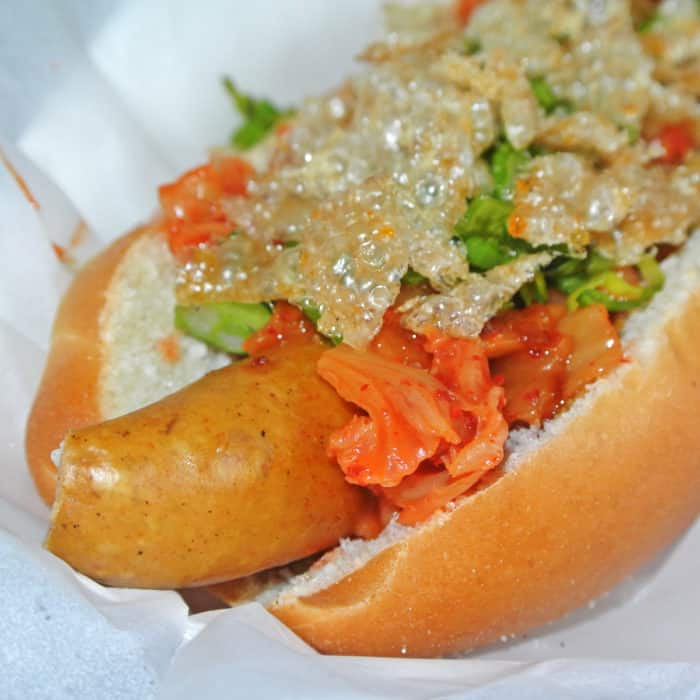 But, that wasn’t the only thing I came to the shop for. I just couldn’t resist giving some of their to-go meats a shot so I also picked up about a quarter pound of two different sliced-to-order meats for home consumption. Later that evening, I had some friends over for drinks and plated the meats as appetizer munchies. My friends really do love when I have epic meats around.

First, I selected their Beef Brisket Pastrami because that spiced marbled meat looked absolutely incredible inside the butcher case. Also, pastrami is one of things I still miss most about New York. Let me tell you, this stuff was delicious. It wasn’t as fatty, tender, or fall-apart as the orgasm-inducing stuff everyone and their mother loves at Katz’s in NYC, but there was certainly an impressive a level of complexity and quality to 4505’s version.

The pastrami spice rub was bold and actually had a lot of unexpected spicy heat. Most pastrami I’ve experienced in the past uses the spice rub more as a flavor profile and less for actual spiciness, but I liked the way this worked. Also, the meat itself had a real substantial meaty quality to it with toothsome bites through the reddish pink marbled portion and melty, succulent, lusciousness to the a thick ribbon of white fat lining one edge. This pastrami was very different than most of the wet and floppy stuff I’m used to, but it was delicious in its own right.

In addition to the Pastrami, I also picked up another sliced meat that I was curious enough to try even though I really had no idea what to expect – a light colored salami called Salame Rosa. This too was very good. It had a really nice multi-textural consistency inside and quite a lot of complexity to the flavor. But, for sure my favorite part about this meat was the aggressively bold peppery flavor I tasted in every bite. I’d definitely get this meat again too. 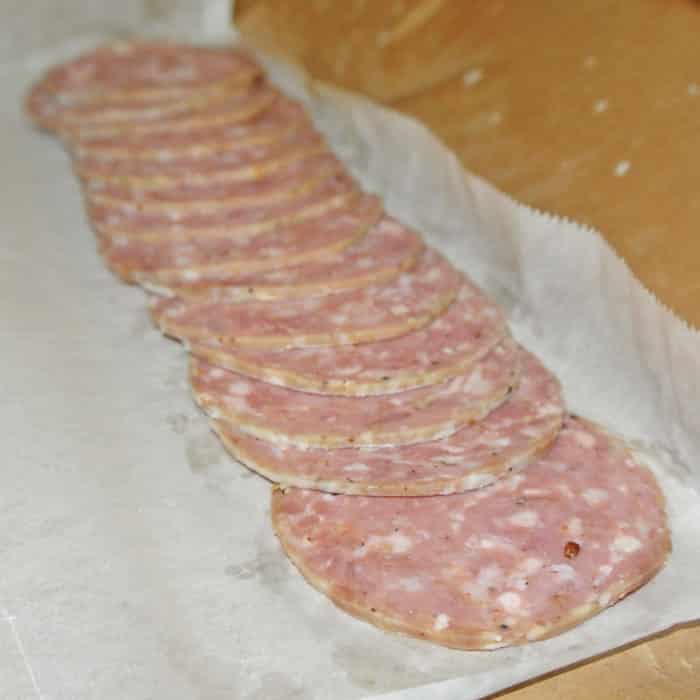 So, while it’s certainly not cheap to really get anything at 4505, I think their high quality sliced meat and deliciously fancy hot dogs are totally worth the cost. Everything I tried seemed like it was made with an extraordinary amount of skill and care and left me both happy and impressed with the results. 4505 really lived up to its reputation.

Got another incredible butcher shop in SF that I should check out? Let me know in the comments below.