I ventured into the land that birthed Guy Fieri.

Santa Rosa is the place the spiky Food Network demigod calls home. I wasn’t intending to eat at another place that had been featured on Diner’s, Drive-Ins, and Dives so soon, but given the fact our day trip that ended up taking us to his hometown, it shouldn’t be too big of a surprise that we did. We were actually in Santa Rosa exploring the area’s wineries, but pre-noon wine tasting on an empty stomach pretty much always necessitates a good, filling meal. My growling stomach went straight to Foursquare to find a killer lunch spot nearby which led us to the Fieri-favorite La Texanita.

La Texanita is about a 10 minute drive away from the 101 in a part of town that isn’t exactly pretty or tourist friendly. Nearly every place out there seemed to cater to the primarily Spanish-speaking locals. But, out of the dusty, run-down Santa Rosa streets brightly gleamed a purple and yellow painted building bearing the name La Texanita. As we left our car and walked toward the building a local hollered at us “Are you ready for the best Mexican food in the entire world?” Why yes sir, I believe we were.

Sure enough, the interior was painted just a vibrantly as the exterior but also proudly featured a large poster displaying the blonde-spiked host’s pudgy face near the entrance. And if that wasn’t enough Fieri for you he even stamped and signed the actual wall right next to it. The stenciled graffiti read “Guy Ate Here” so I was sure that despite my distance off the beaten path, I was certainly not the first gringo to lay foot in this joint. 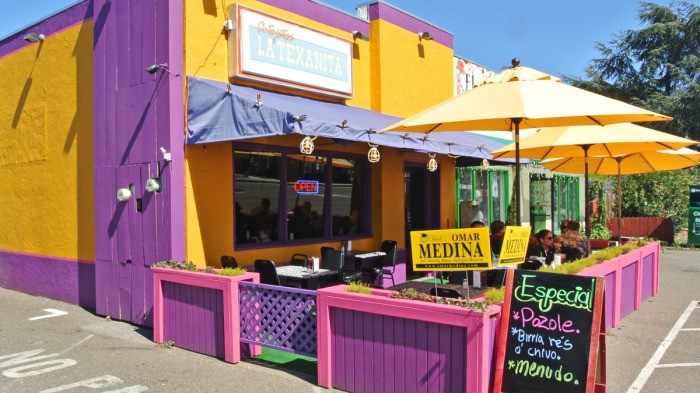 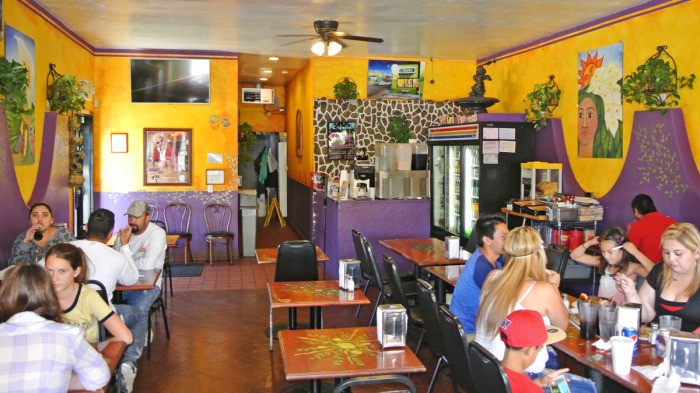 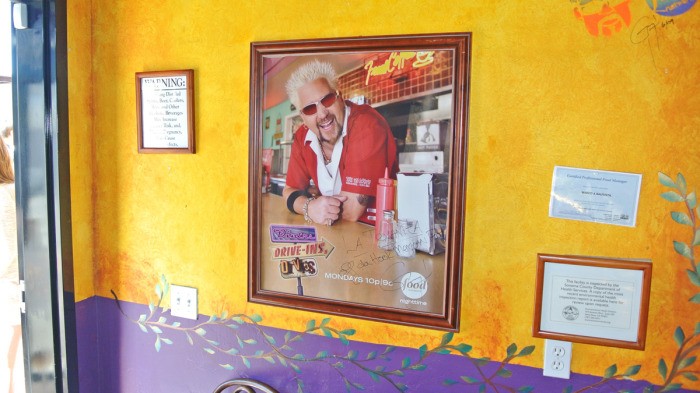 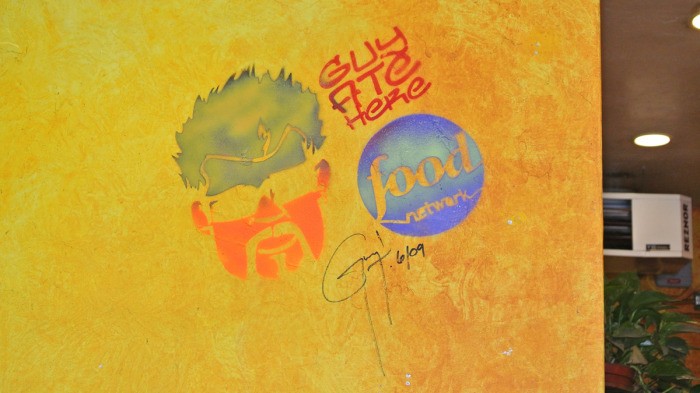 Since it was quite a hot, sunny, and beautiful day, we asked to be seated under one of the umbrellas out front. Because seriously, what’s better than crushing Mexican food while feeling the sun’s warmth on your skin?

We were immediately greeted by a basket of tortillas chips with a cup of fresh salsa and avocado crema sauce. The salsa was delicious, but I was obsessed with that thick, creamy, slightly spicy avocado dip. It was incredible tasty and addictive so we quickly swiped the entire first cup of it clean. Our waitress was more than happy to provide us with a few more cups, which definitely came in handy when our main courses arrived.

We got a couple of dishes between us and started with the Carnitas Super Burrito which was truly magnificent looking. That thing was a beast, fully loaded with slow-cooked pulled pork carnitas, rice, beans, cheese, lettuce, salsa, sour cream, and guacamole.

They were really generous with the portion of meat inside the burrito which was a welcome difference between La Texanita and the kinds of places I’m used to back East. Those subpar Mexican joints usually try to fill you up on rice and beans and skimp out on the part you really want – the meat. This burrito was fully loaded and the pork was very tender, juicy, and flavorful. It really didn’t need any additional toppings, but I still enjoyed pouring a bit of that delicious avocado crema on every bite. 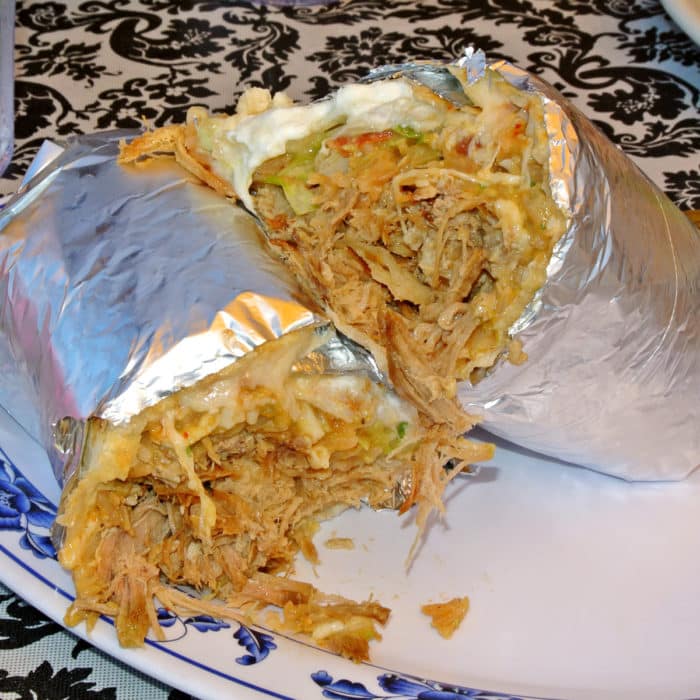 We also went for a Carne Asada Burrito since the steak was one of the most positively tipped-about menu items on Foursquare. And just like the previous burrito, this one was absolutely enormous.

But that’s exactly what we needed on a day full of wine tasting. The steak was simple, but also very nicely executed. Everything was just done right without a lot of flair or distractions, just like a real Mexican momma would make. 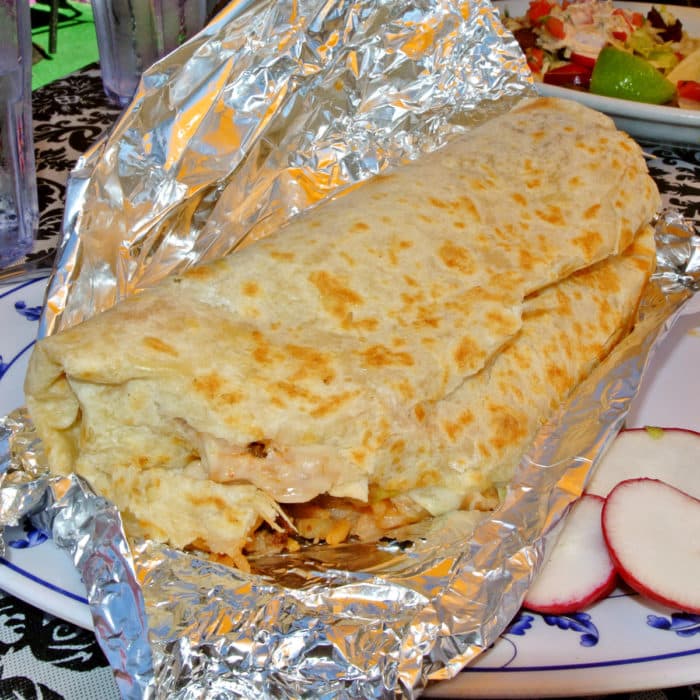 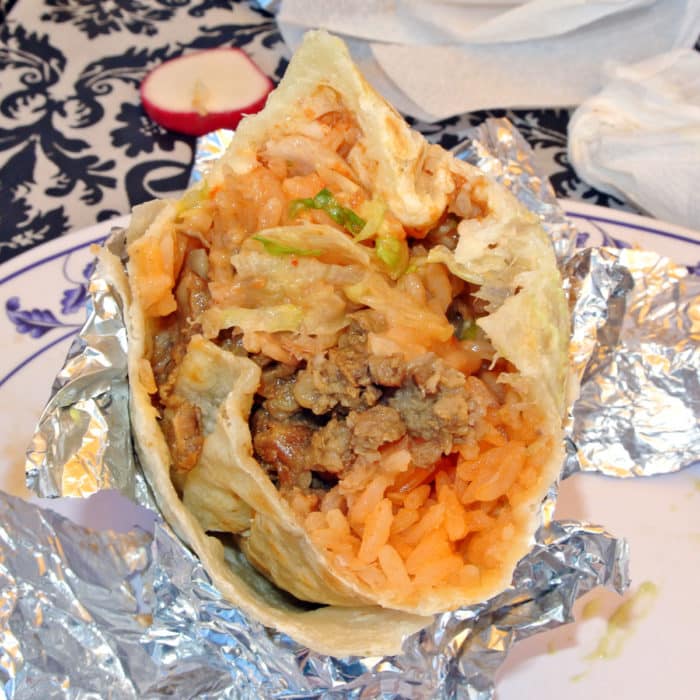 For the third and final dish of the meal, we went in a different direction with the Chorizo Huarache. There was a bit of debate between us which was the best thing we ate, but I’m confident that the huarache stole the show.

The large, thick oval of chewy homemade masa served as a base on which they layered all of the usual burrito fillings. Except in huarache form, they also laid large slices of perfectly ripe avocado over top and included a hefty sprinkling of cotija cheese.

I’ve got a long history of chorizo love and this deep red crumbly variety satisfied my nearly unquenchable craving. Eating this dish was definitely a knife and fork ordeal, but I loved every last meaty flavorful forkful of it. 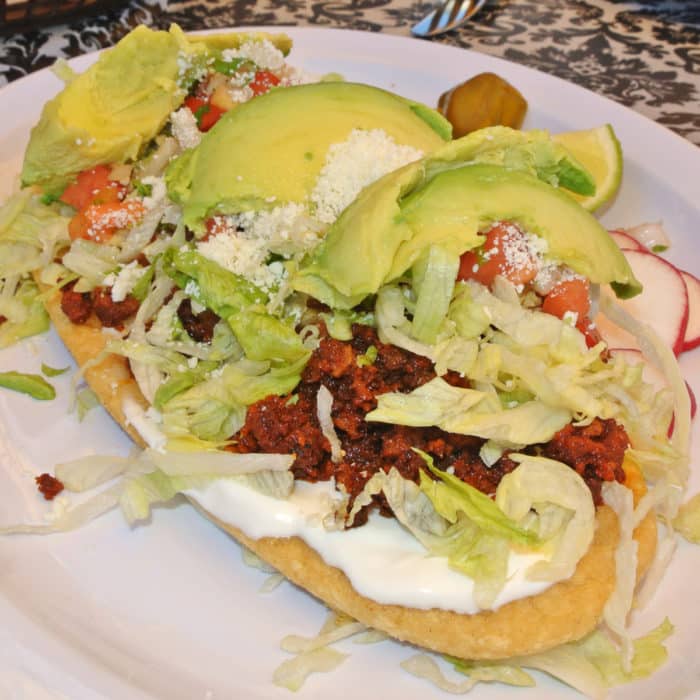 So there you have it. Another winner from the Fieri camp, this time hailing for the bronzed-one’s hometown of Santa Rosa. If you find yourself in the area, do yourself a favor a stop at La Texanita. It may not be in the nicest part of town and there’s nothing trendy or flashy about the food. It’s just good old fashioned hearty Mexican food done right.

Got another place in Santa Rosa worth stopping into for a meal? Let me know in the comments below.