Now that I’ve moved to San Francisco, I’ve got a whole host of restaurants to explore in my new neighborhood. There are plenty of obvious eye-catching eateries on the main Polk Street drag, but there was just something about that unremarkable and completely illegible awning that caught both of our eyes while walking down one the side streets. It was getting close to dinner time and we weren’t sure what we felt like having for dinner, so we decided to venture inside and try out this mysterious Latin American spot we knew absolutely nothing about.

The illegible blue awning actually spelled out the name La Fina Estampa which means “Looks & Essence” in Spanish. It’s a curiously vague restaurant name, but how could I resist trying a place that claims to be a Spanish and Peruvian restaurant. Although it didn’t look like much from the outside, it was actually enormous and beautifully decorated inside. The room featured lofty ceilings and a variety of traditional Latin American decorations covering the walls

Even during prime dinner hours when we stopped in, the gigantic restaurant was practically empty save for another table of two. But really, how would anyone know to walk down this random side street and into this low-profile place? 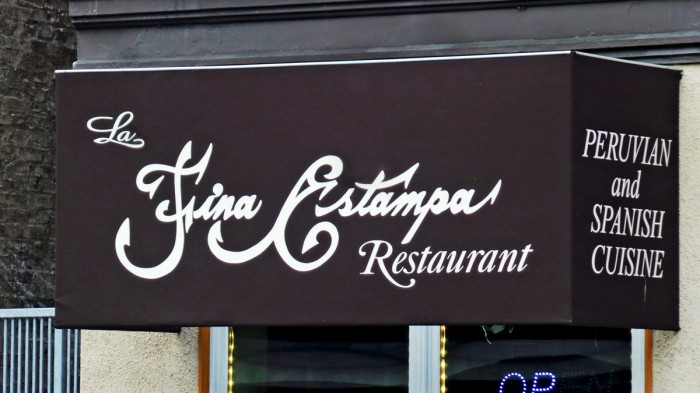 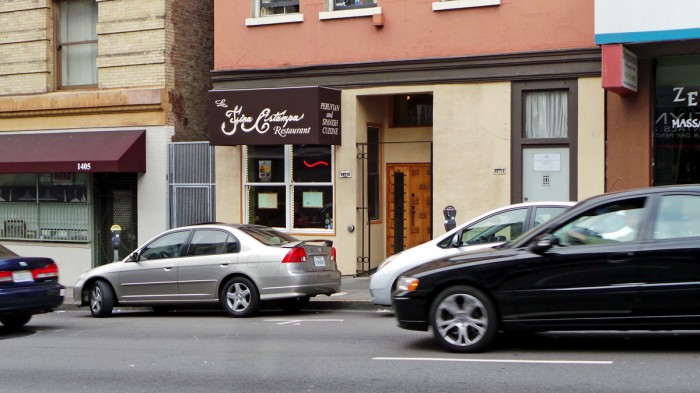 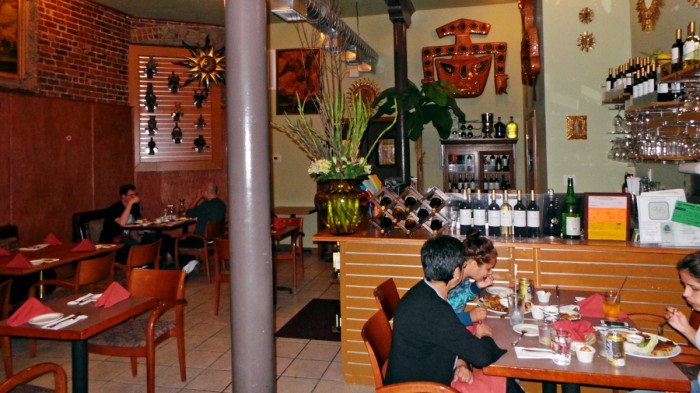 There was a single server (who was also possibly the owner) working the floor and he was super-friendly, upbeat, helpful, and was so excited to help answer any and all of our questions about the menu. He was a really valuable asset in deciding what and how much we should be ordering between the two of us. Surprisingly, he even (wisely) dissuaded us from ordering a fourth dish insisting that portions were quite large with an ear-to-ear grin of pride.

We started off the meal with some sangria which ended up being a phenomenal deal at only $10 for a carafe. It was made to order, it was strong, it was loaded with fruit, and it was absolutely delicious. If you’re not in the mood for an alcoholic beverage, I’d instead suggest getting a bottle of the truly strange and rarely seen beverage called Chicha Morada. It’s a really unusual Peruvian drink made with purple corn that I don’t particularly enjoy, but for authenticity’s sake, you should probably pair one with your meal. 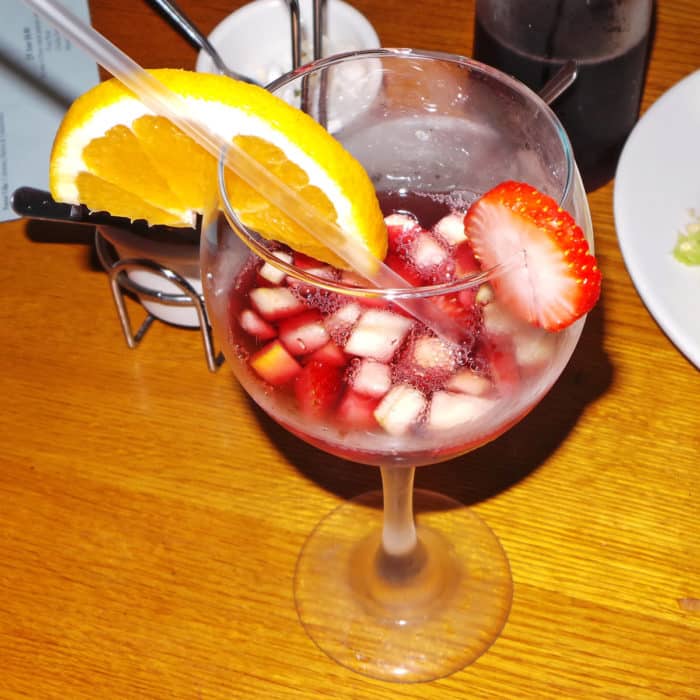 I usually try not to waste my belly space on bread, but if you serve me interesting, delicious condiments along with the basket of bread, how could I not try them all? There were three different options, a white one, a red one, and green one each with their own flavor, texture, and purpose.

The white one didn’t contribute much flavor; it use is more for texture. It felt kind of like marinaded potato spheres though it’s far more likely that it was yucca. I much preferred the other two and loaded up my piece of bread with plenty of the boldly spicy and creamy red sauce and bright, herbal chimichurri. 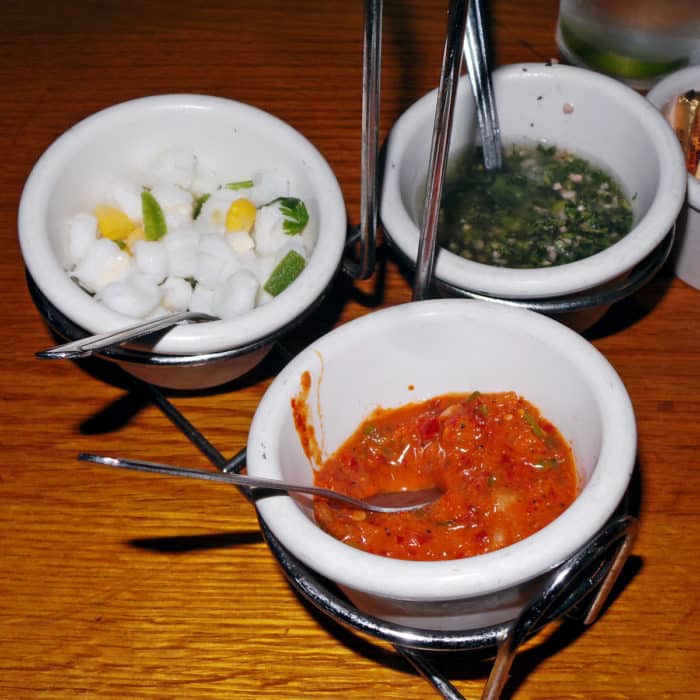 Our server strongly recommended getting the ceviche that was the first of our dishes to arrive. It was a pretty traditional Peruvian preparation of Ceviche de Pescado made with a white fish that I think was sea bass and true to his word ended up being a pretty generous serving.

The fish was cut into thin, long strips and came dressed with plenty of spicy citrusy liquid, slivers of red onion, and a handful of Peruvian crispy corn kernels called Cancha. The plate also came with very simple accompaniments of boiled corn, boiled yam, and boiled potato which don’t sound particularly exciting but were actually all executed perfectly. On their own, those veggies were quite plain, but when combined with the spicy, bold, and flavorful ceviche and crispy, crunchy corn kernels they all worked wonderfully. 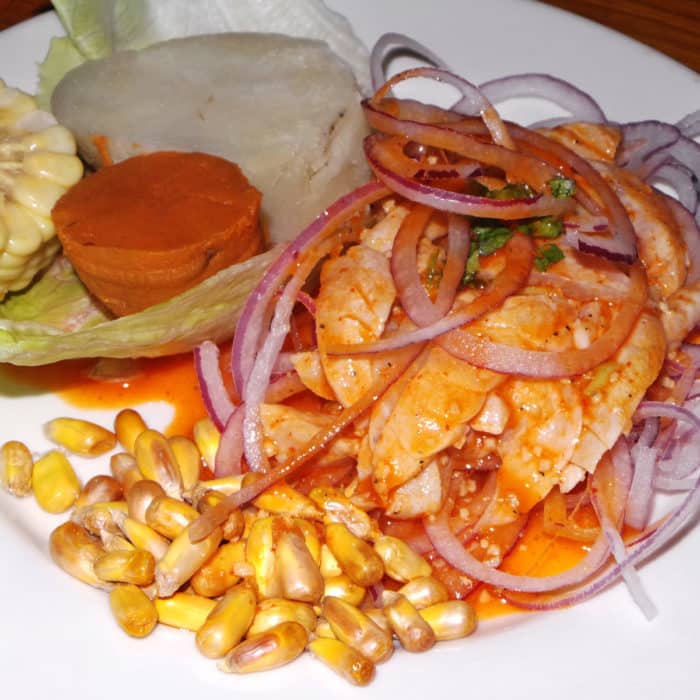 The second dish that arrived was a Peruvian classic that caught my eye immediately called Anticuchos or more commonly known as beef heart. I’d actually had the dish once before, although that one came scarily enough from a street cart in New York City. Risky move, I know but I’ve never been afraid of a little offal even if it came from the street. I really enjoyed my first experience with anticuchos and had also eaten another really excellent beef heart dish out here in California not too long ago, so I had a good feeling about this one too.

This was another very straight-forward dish and was prepared very traditionally. The plate simply included two enormous skewers of broiled beef heart with a large hunk of grilled potato and lettuce. The meat’s flavor was really nice on its own, but the previously mentioned bread condiments definitely came in handy to kick it all up a notch.

Honestly, this beef heart felt and tasted a lot like any standard cut of beef – not some scary foreign organ meat – so if you’re curious to try it you shouldn’t worry about it being too far outside of your comfort zone. Yeah, it had a bit of a chew to it, but nothing unreasonable or unpleasant at all.

The third and final dish of our meal was another recommendation from our waiter. We he asked him for a recommendation involving grilled fish and he responded immediately that we had to get the Pescado Saltado. Sure, why not. The menu description sounded delicious enough, but we really had no idea what was actually going to arrive…

It ended up being a sort of Peruvian stir-fry with large hunks of golden-flesh white fish sautéed with onions, tomatoes, and FRENCH FRIES. I’ve had french fries included in dishes in a variety of unusual ways, but I’d never before had them in a brothy stir-fry like this.

The thin tomato-y broth was crazy delicious and the french fries actually did an excellent job sopping up that liquid. The large hunks of fish also had a really great texture, especially when they were eaten in the same bite as the juice-soaked french fries and onions. This was certainly one of the stranger stir-fries I’ve ever come across, but the waiter wasn’t wrong about the recommendation. It was totally delicious. 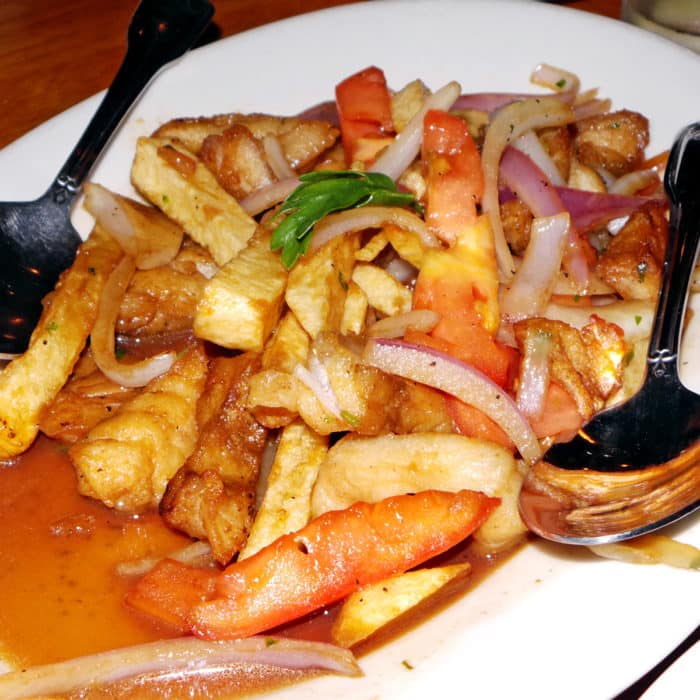 Even though this restaurant is hidden off of the main Polk Street drag and doesn’t seem to get much foot traffic, don’t let that deter you for going in for a meal. The food was fantastic, the service was excellent, and prices were very reasonable. They’ve got all of the elements of a great neighborhood restaurant, I think they just need a bit of promotion so they can fill up with customers to survive and continue doing their thing.

Got another impossible to spot neighborhood joint in San Francisco? Let me know in the comments below.