Transport yourself to Hong Kong. And you don’t even need to leave the cushy confines of Palo Alto, California. Just a block off the main drag on University Avenue, there’s a massive dim sum parlor that would be all too easy to miss while walking by. Despite its enormous front signage, there’s nothing about its appearance that would actually draw a pedestrian inside to experience an authentic Hongkongese dim sum meal.

The restaurant really is humongous and consists of a number large rooms filled with many large, round tables. The decor has that classic stereotypical Chinese style, you know the kind of things you see in movies that seems like they wouldn’t really exist in a real world restaurant. And the wait staff wore those stereotypical shiny kung fu silk shirts that would be right at home in any Bruce Lee film. Maybe my view of what’s authentic and what’s fake and corny is skewed, I really don’t know. All I know is that I was amused by the whole set up. 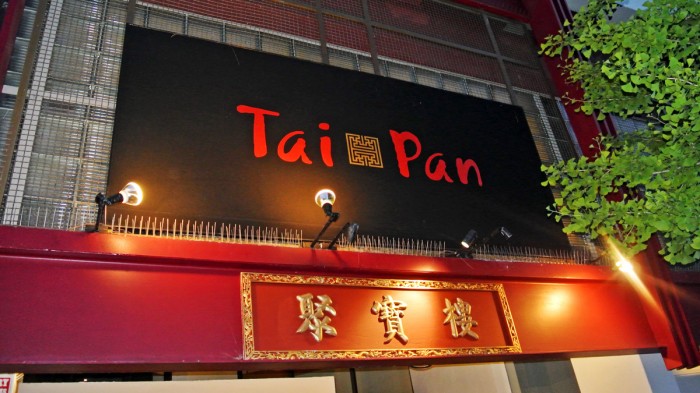 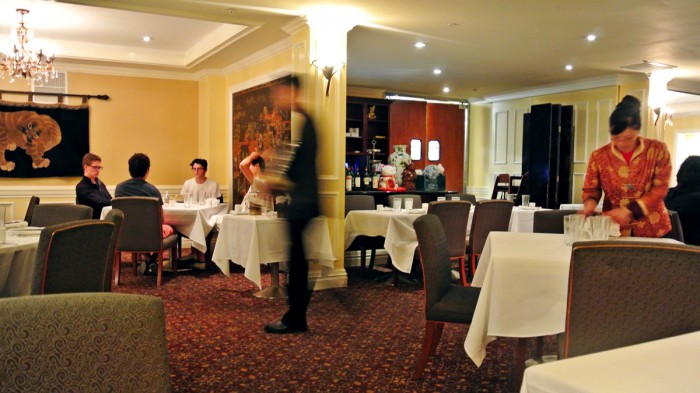 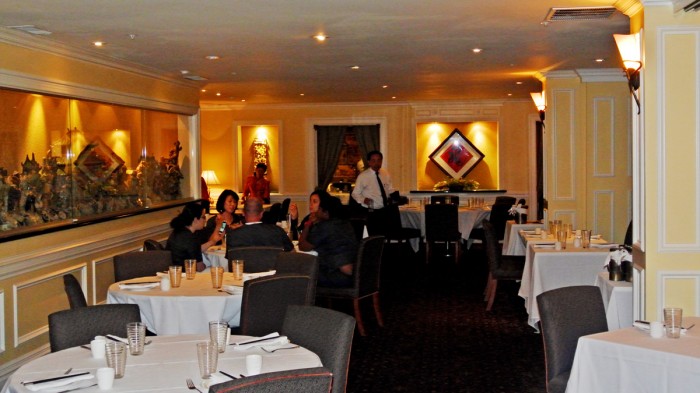 Although they consider themselves a dim sum joint, they do not have any of the rolling push carts loaded to the brim with dumplings and other goodies that I associate with the cuisine like I had learned to love at my favorite New York dim sum parlor, Golden Unicorn. At Tai Pan, they have sit-down waiter service and you must order from a menu.

I began my meal with a dish called Tai-Pan Peking Duck with Lotus Bun. Two buns came to an order and each one was stuffed with a hunk of meaty, skin-on peking duck. They really were quite good and each came served with a layer of wonderfully crispy skin over the tender, juicy, duck meat. It was a simple and delicious dish that consisted only of the fluffy bao bun, sliver of green onion, and meat to keep the focus and highlight on the excellent peking duck. 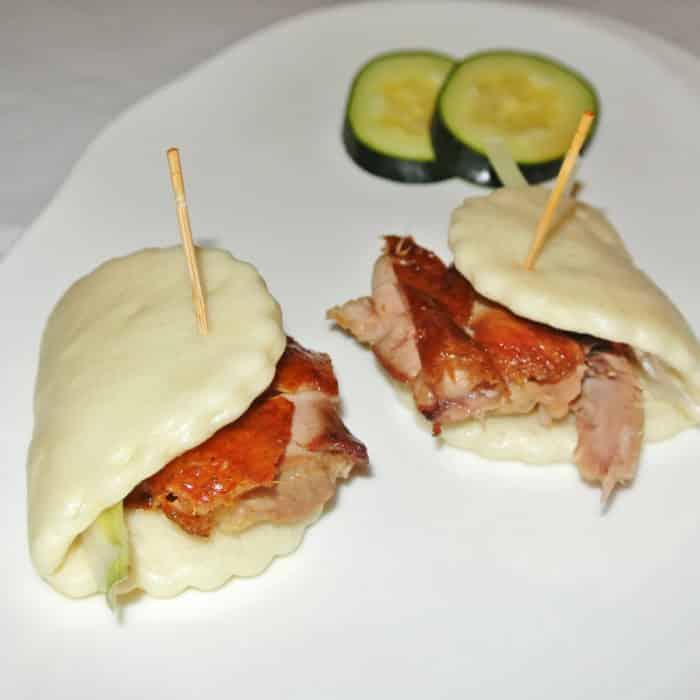 Next, I went for classic dim sum dumplings traditionally known as Har Gow. Har Gow are one of my favorite dumplings types and I pretty much always have to get an order when I’m having dim sum.

These steamed shrimp-filled dumplings were pretty petite, but everything else about them was spot on. The skin was very sticky and each one was loaded with a whole, plump, snappy shrimp. The dumplings didn’t have much flavor on their own, but that’s not unusual with this sort of thing. I just dipped them in a bit of the spicy-garlicky red chile sauce to kick ’em up a notch.

I then had a dish called Crispy Salt and Pepper Sea Bass which to be blunt, was essentially Chinese fish sticks with spaghetti. I know that doesn’t sound very flattering, but I really did enjoy it. The fish inside the fried crust was white, flaky, and tender and the breaded exterior was quite crispy, but these would have been just as tasty if they were treated like their non-Chinese counterpart with the addition of malt vinegar.

Instead, in this preparation, they were served with a ton of toasted minced garlic, a bit of hot pepper, and plenty of liquidy orange sweet and sour sauce. To round out the plate, they were served over a large wriggly pile of lo mein. I’m a garlic fiend, so I actually liked this unexpected take on crispy fried fish quite a lot. 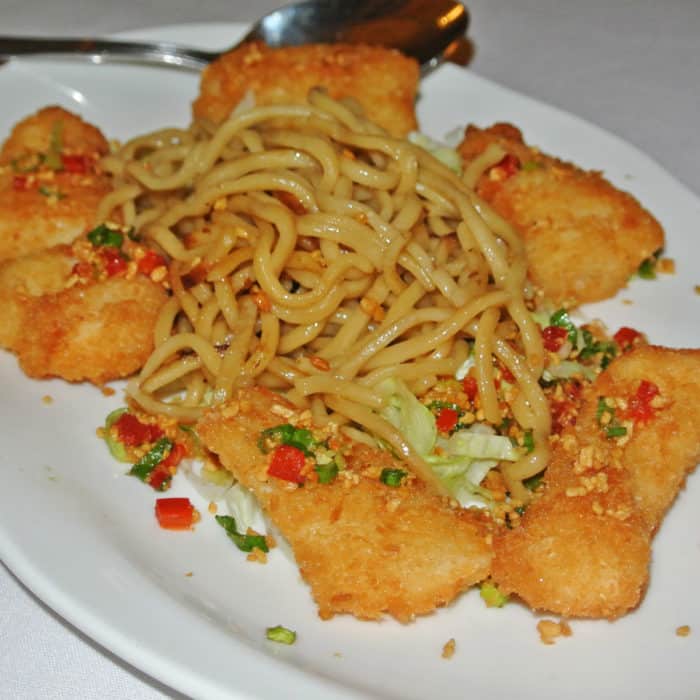 Finally, I ended my meal with a plate of Mongolian Beef. This enormous platter came with a bounty of thin, flattened, tender beef slices served in a sticky brown garlic sauce over a bed of green onion, white onion, red chiles, and styrofoam noodles. The dish was very tasty and well executed, but I ended up just picking all of the beef out and didn’t bother with any of the other elements which were less exciting. 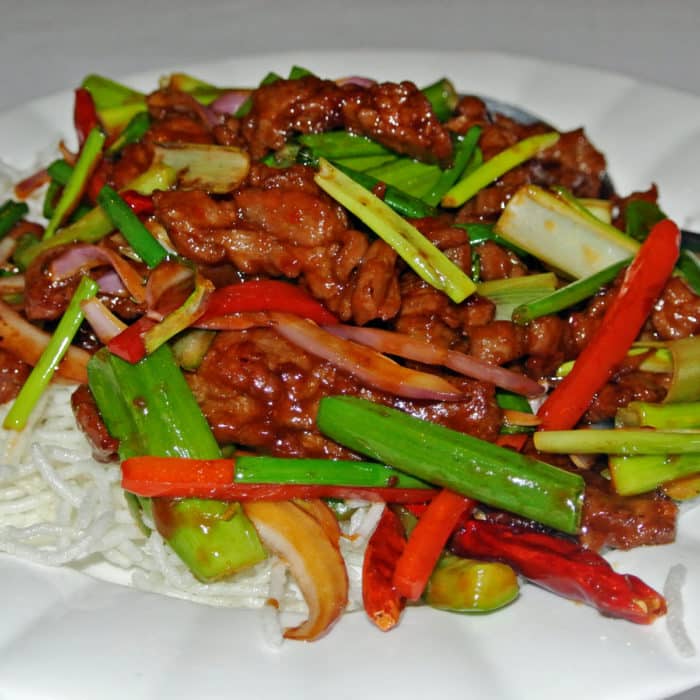 So, Tai Pan is in my opinion a little expensive for what it is and I wish they used to the push cart format I love so much about having dim sum elsewhere. But, everything was certainly well executed and delicious and if this is the kind of Chinese food you’re in the mood for and you find yourself in Palo Alto, it should serve you well.

Got an even better dim sum spot in Silicon Valley I need to check out? Let me know in the comments below.

A Perfect Day of Eating & Wine Tasting Across Paso Robles