Starbelly is generally regarded as the best restaurant in The Castro so I definitely went into this meal with high expectations. People rave about this place and their renditions of Californian farm-to-table local organic comfort food. I certainly haven’t dined in the Castro enough to be able to confirm or deny if it really is the best restaurant in the neighborhood, but I knew I definitely had to check it out for myself.

I happened to be in the neighborhood one Sunday during early dinner hours and figured it would be the perfect opportunity to drop in and check it out. It’s a really good-looking place with lots of warm wood tones throughout. They even have a large outdoor garden dining section out back, which seems to be quite popular since we were not able to be seated there. 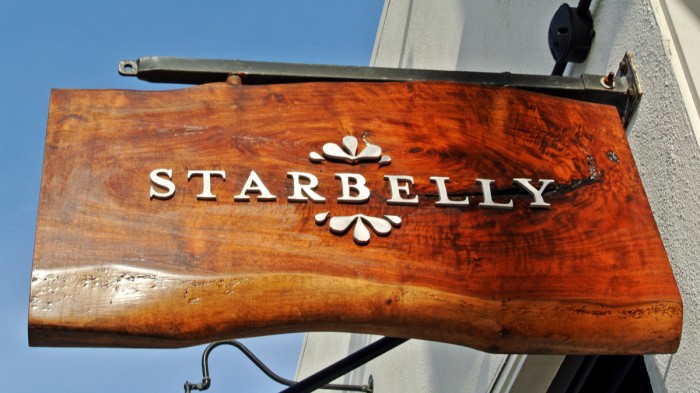 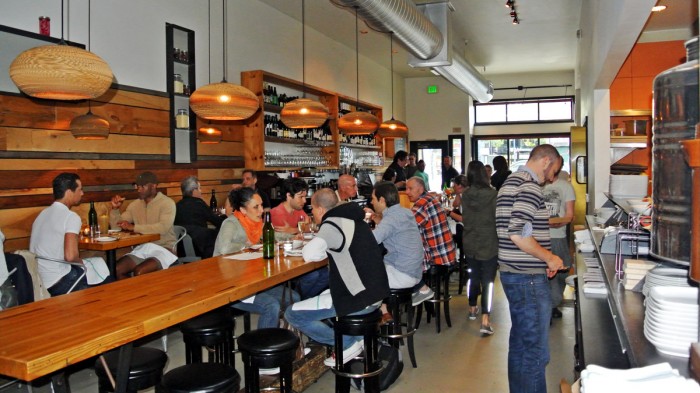 In an attempt to not be complete gluttons, we had veggie focused appetizers starting with the Split Pea Fritters. These fritters were deep fried like falafel balls, but had a less spiced and slightly more vegetal flavor than the traditional Middle Eastern dish we all know and love.

The key to these was the creamy curried yogurt dipping sauce which was a nice addition, but fairly mild. These were tasty, but I probably would have been just as happy eating regular old falafel balls. 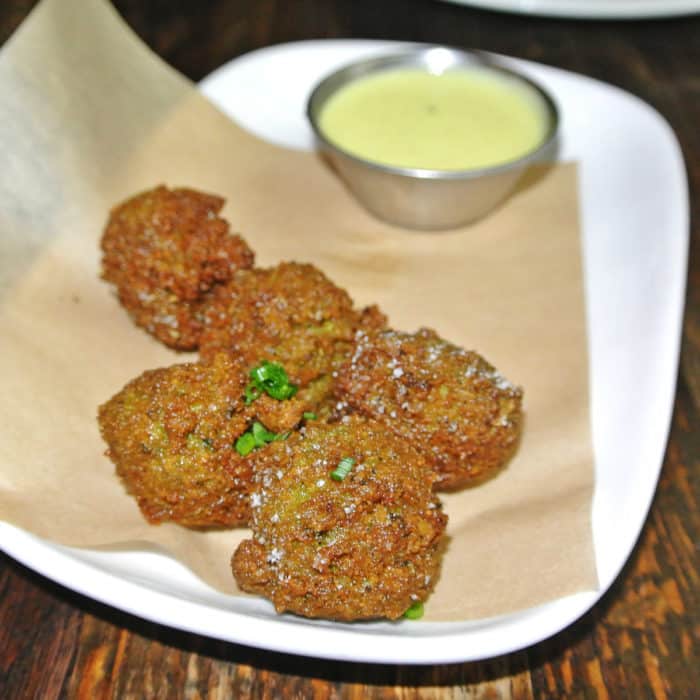 We also started with an order of Honey-Balsamic Glazed Long Beans which I guess were kind of gluttonous due to the inclusion of a fistful of crumbled bacon. These too were pleasant, but again fairly mild and straight forward. Good, particularly because of the bounty of bacon, but nothing I would go out of my way for. 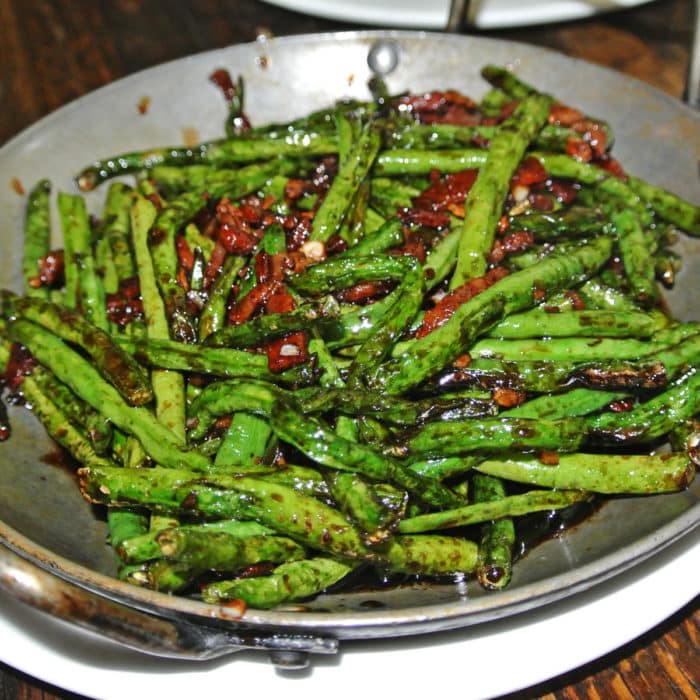 We also chose the much talked about and very highly regarded House Made Chorizo, Sunny Eggs, & Cilantro Pizza as one of our split mains. The chorizo was the crumbly kind and the eggs were cooked lightly so the yolks could be popped and allowed to run all over the pizza.

It sounded like dreamy perfection, but this too was light on flavor. The house made chorizo was nice and all, but it lacked that spicy heat I crave and ordinarily love about the ingredient and nothing else really stood out flavor-wise on the pie. 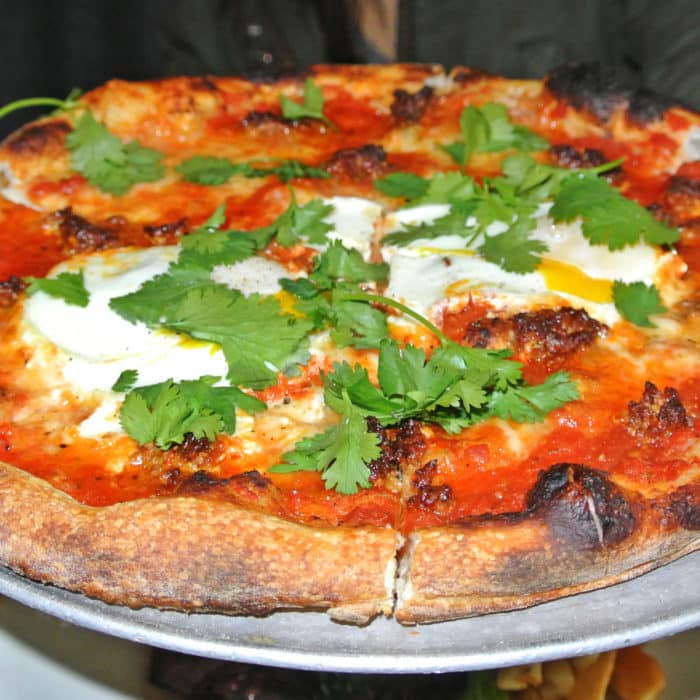 The last dish of the meal was the Bavette Steak which was served with yucca fries, grilled green onion, & salsa verde. It was cooked nicely and had a bit of char flavor, but once again was so straight forward and mild that even with the also mild salsa verde topping, I wouldn’t really give this dish a second thought. 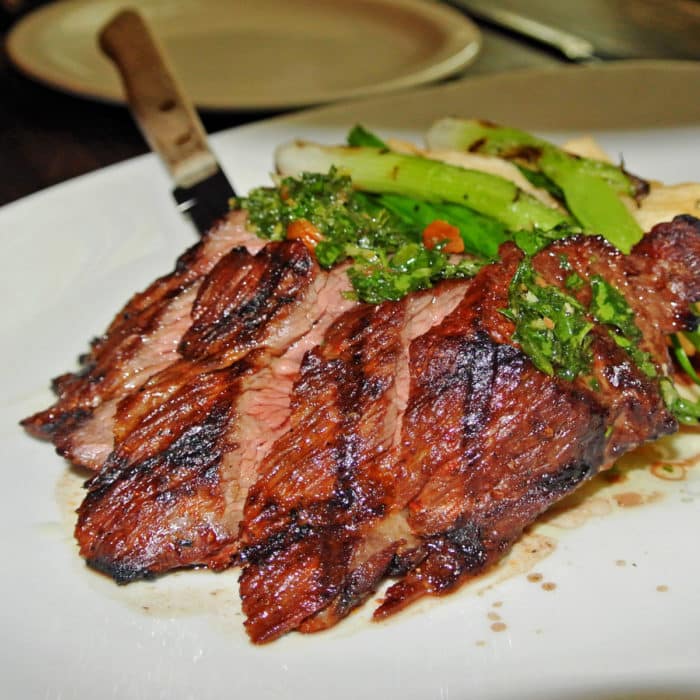 I wanted to love Starbelly, I really did. And it could have simply been a case of not ordering the right dishes to properly highlight the restaurant’s strengths, but I wasn’t in love with this place like everyone else seems to be. All of the food was competently executed, but ultimately we found nothing was very exciting or particularly memorable. Sorry Starbelly, I’m sure I’ll be back to give it another shot. Maybe you’ll prove me wrong next time.

Got another dinner spot in the Castro I should check out? Let me know in the comments below.