Listen up. I have found my new favorite restaurant IN THE WORLD. This place served me, without a doubt, the best food I’ve ever eaten. Twice. Both visits were, in my humble opinion — flawless. Where and what is this incredible restaurant, you ask? It’s The Cavalier at Hotel Zetta near Union Square in San Francisco and you absolutely must go.

Where do I even begin with this one? Well, I’ll start off by letting you guys know that I sat at the beautiful adjoined cocktail bar for both of my dinners and received impeccable, attentive service from the bar staff each time. The restaurant’s decor has a sort of regal, wood-paneled, leather-lined trophy room vibe that feels like a place where a wealthy gentleman would contemplate life over a good cigar while admiring his taxidermy collection. It’s very sexy inside and would serve as an excellent backdrop for a date night when you’re looking to impress.

As a newcomer to San Francisco, I was previously unfamiliar with the restaurant’s acclaimed chef Jennifer Puccio and its sister restaurants Marlowe and Park Tavern. They all seem to be very well-known, well-regarded, and often written about so I’m probably late to the Chef Puccio praise-party, but better late than never, I say. Actually, earlier this week, over at The Infatuation Max wrote less than enthusiastically about The Cavalier, but based on the dishes he had, I think his downfall was simply a case of ordering the wrong things. Max, buddy, give it another shot! 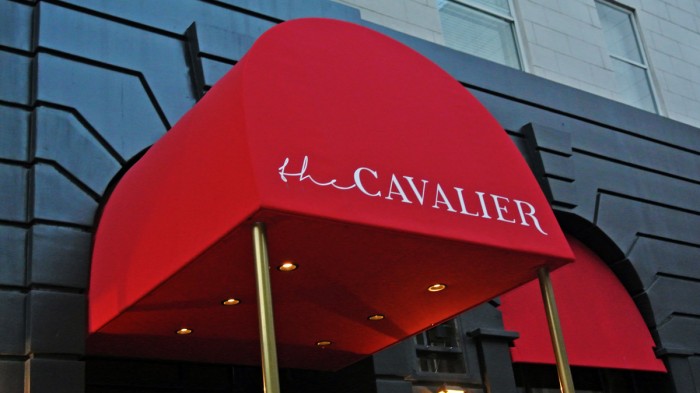 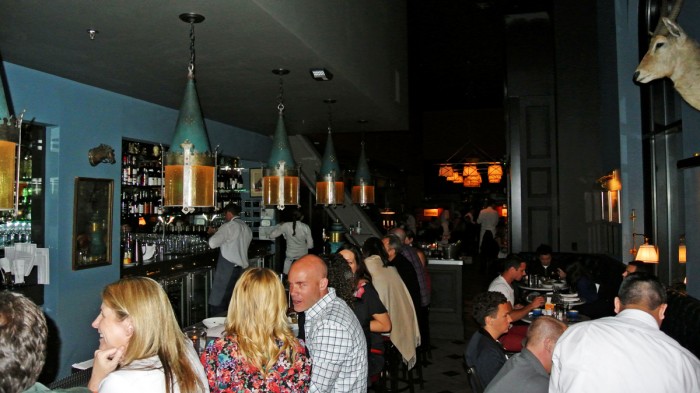 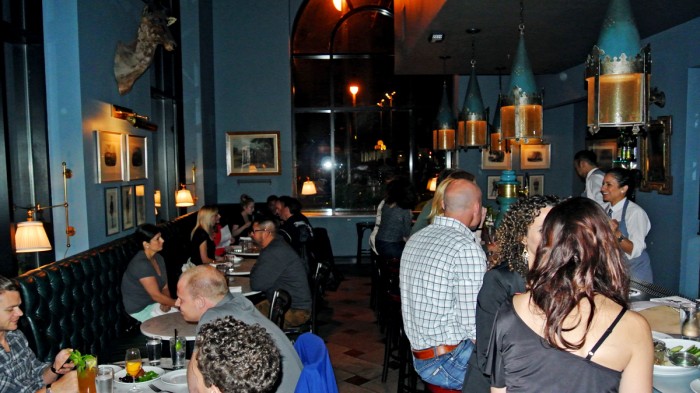 The right way to kick off a meal at The Cavalier is with a selection from the cocktail menu. It’s short and sweet, listing only nine options, but every single one is well thought out and executed to perfection. First, I’d like to draw your attention to the Club Cocktails column which included three old-world cocktails first concocted in famous London drinking clubs. 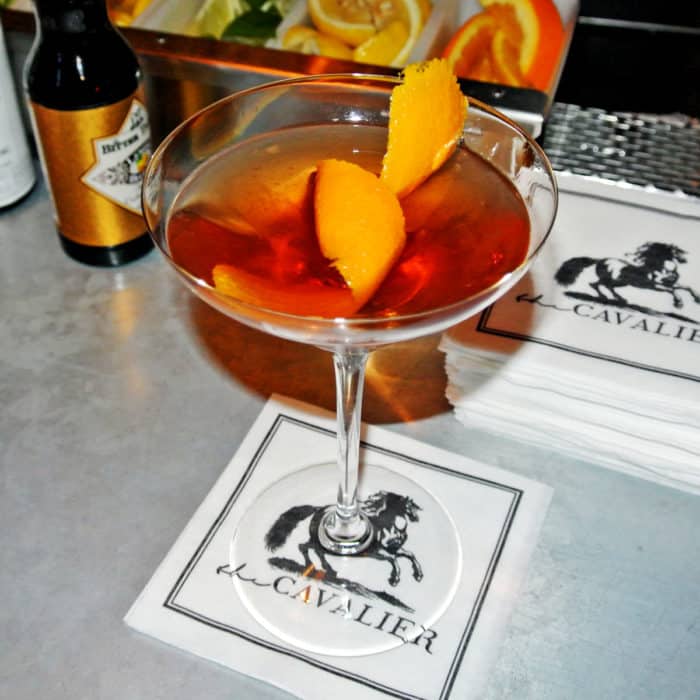 A quick conversation with our extremely helpful and knowledgable bartender led us to order a bowl of Crispy Brussels Sprout Chips. Apparently the chef has developed quite a reputation for her Brussels Sprouts and includes a version on every one of her restaurants’ menus. And I can see why. These were pretty much the best brussels sprouts I’ve ever tasted.

The leaves were flaky and crispy and snacked easily like potato chips. They were flavored with fish sauce and a traditional Indian spice blend called vadouvan which was a really bold, exciting ingredient that kicked up those leafy greens very well. I’d highly recommend a bowl of them as a starter. 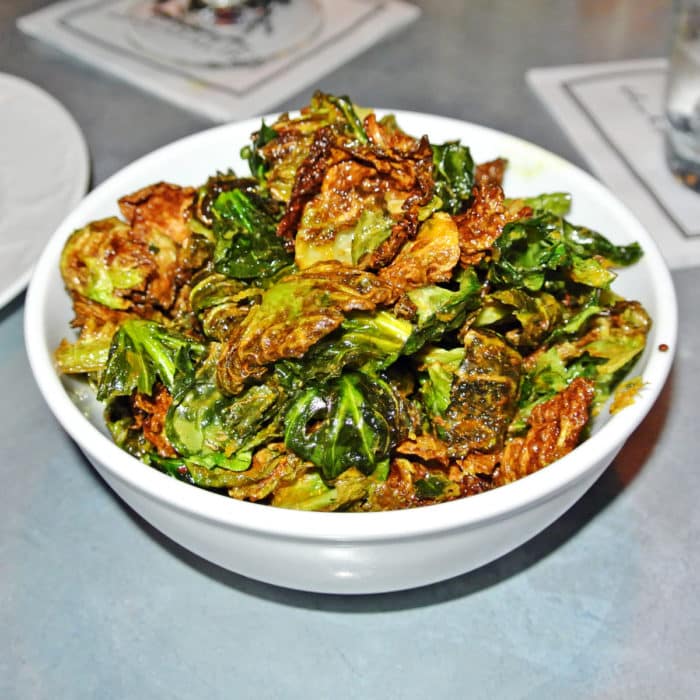 We then went for an order of Baked Oysters which were topped with crispy, golden breadcrumbs, horseradish cream and — wait for it — rich, melty bone marrow. The mixture of temperatures, flavors, and textures was perfect, though I’d argue that many of the other dishes I ate over the course of my two dinners were far more exiting and worth your while.

Take for instance the evening’s special of Tartare of Lamb which was perhaps the finest version of a tartare I’ve ever had. The texture of that raw lamb meat was extraordinary and when mixed up with such a flavorful, but restrained creamy sauce, it allowed the quality of the slightly gamey meat to shine. The crispy fried garlic topping was a simple, but absolutely fitting topping for this exquisite tartare. 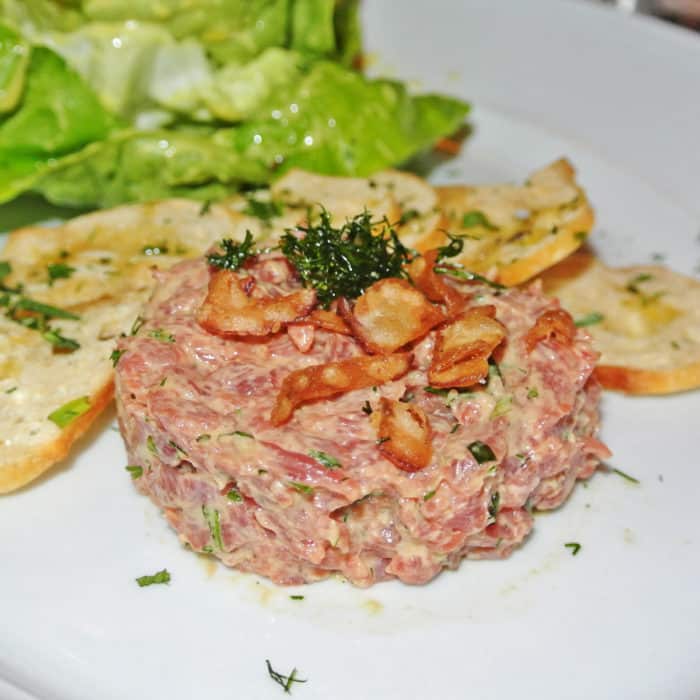 We followed up that decadence with Roasted Beef Marrow Bones, a haute dish I can rarely resist. As is always the case with marrow bones, one half was loaded with more of the lusciously good stuff than the other. That unevenness is expected and acceptedly especially because this preparation was damn good. I recommend smearing some of the fatty, oily, garlicky marrow goodness onto the aromatic butter-loaded garlic bread toast points then drizzling some bright, herbal, salsa verde over top. You’ll be in heaven with every bite. 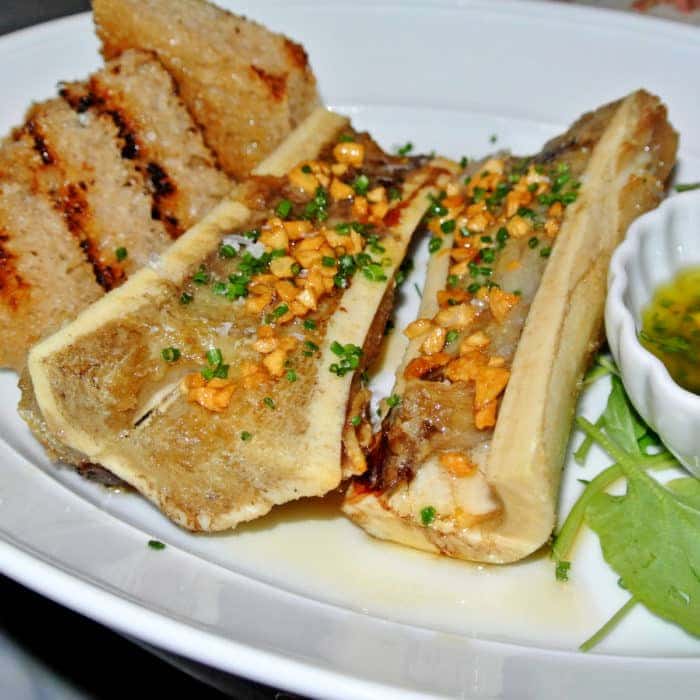 But just wait, the Lamb Scrumpets were my favorite bites of the meal. They also may be the very best thing I’ve eaten this year and are also a strong contender for the best thing I’ve ever eaten in my life. Seriously, they’re that good. I don’t have a clue how they cook these lamb riblets but they are out-of-this-world delicious.

They’re hot, meaty, crispy, tender, juicy, and gamey all at once. The thick hunks of meat just slide right off of the flat rib bones with ease and the bright green pickled mint and chile condiment adds a whole ‘nother layer of complexity to the flavor profile. I don’t think I’ll ever be able to eat lamb the same again. The bar has been raised, the game has been changed. 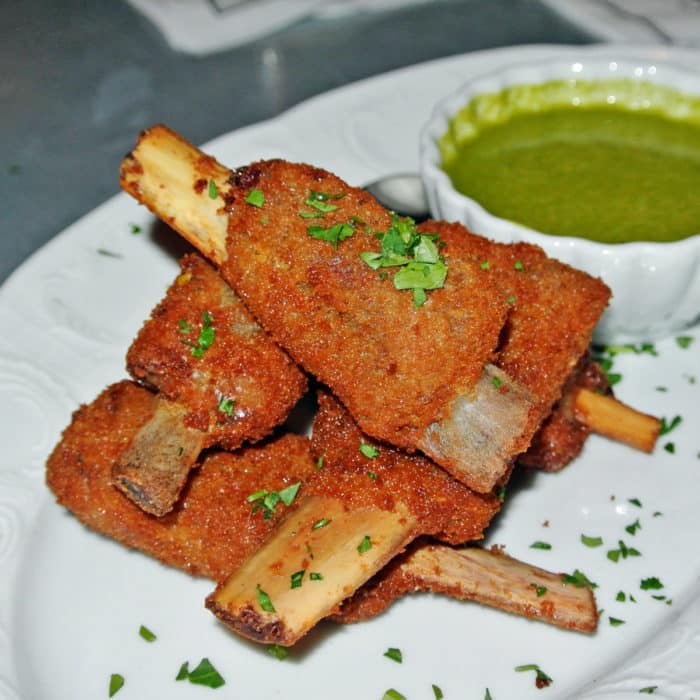 At this point in my meal, it was time for another beverage so I chose another one from the Club Cocktail section of the menu. The White Lady was based on a 1930s recipe from the famous London club called The Savoy and was made with Anchor Distilling Junipero Gin, Creole Shrub, Egg Whites, and Lemon. This was a more delicate drink than the one I had during my first round, but this funky, frothy cocktail was another big winner in my book. 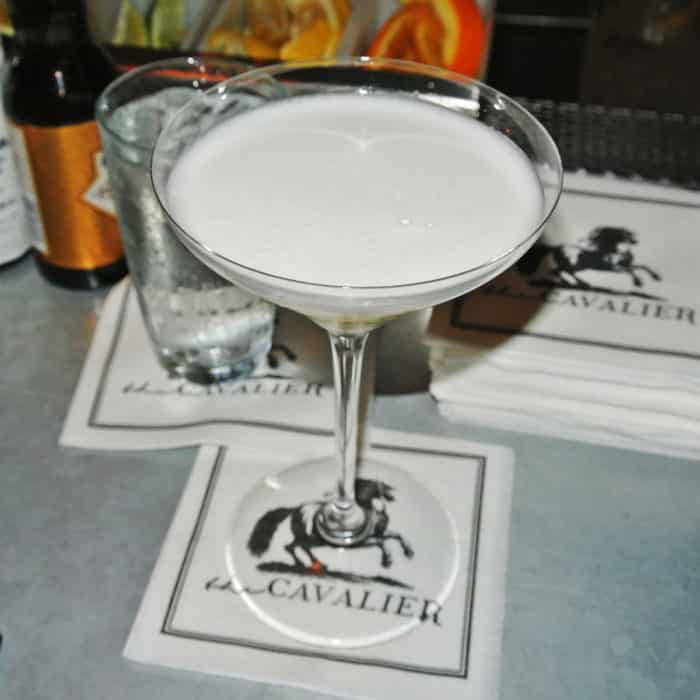 Then it was time for the dish curiously named Duck Duck Scotch Egg. Are you ready for this? It’s an all-duck version of the traditional British pub dish made with a soft boiled duck egg that’s wrapped in loose, chunky duck sausage that’s then breaded and deep-fried until crispy while still allowing the yolk to remain runny inside. 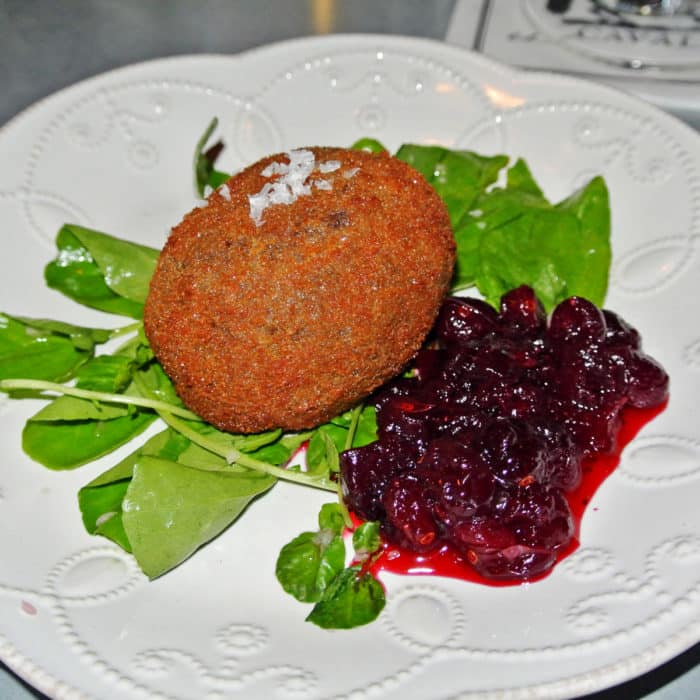 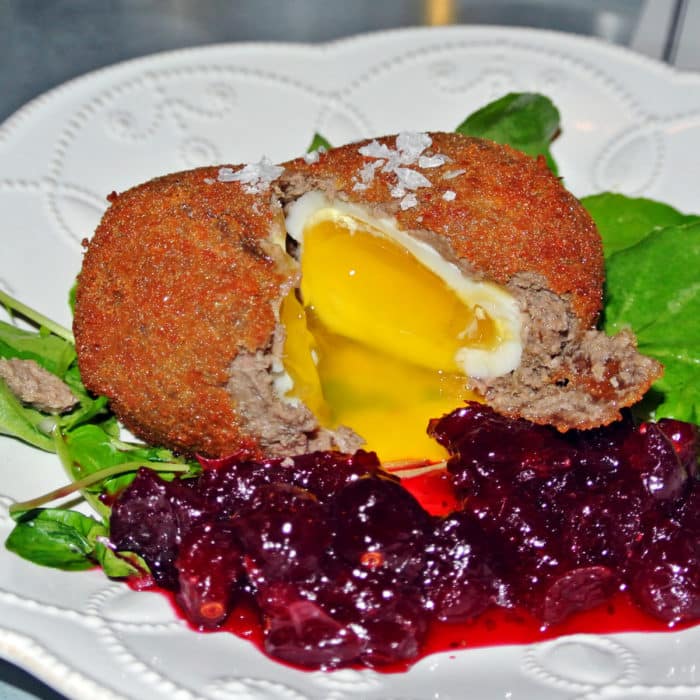 And since we were already completely enamored and blown away by everything we’d consumed, we couldn’t resist but go for broke with dessert. Our attention was immediately drawn to the Sticky Toffee Pudding which was made with Medjool Date, Espresso, and Walnut Ice Cream.

Ridiculous, that’s what this was. The molten cake interior was extremely moist and when combined with the ice-cold ice cream topping and sweet-sticky caramel sauce, it became one of the most memorable desserts I’ve ever had the pleasure of consuming. Don’t even question it, get it.

But we’re not done yet because as I mentioned earlier, I was so impressed by the food at The Cavalier that I quickly returned a few weeks later for a second go-around. Could it possibly live up to my highly elevated expectations? Yes, and the some.

On my second visit I couldn’t resist but repeat some of my favorites like the Crispy Brussels Sprout Chips, Duck Duck Scotch Egg, Lamb Scrumpets, and Roasted Beef Marrow Bones which all were just as phenomenal as the first time. But I would have been remiss not to try a few new things as well. 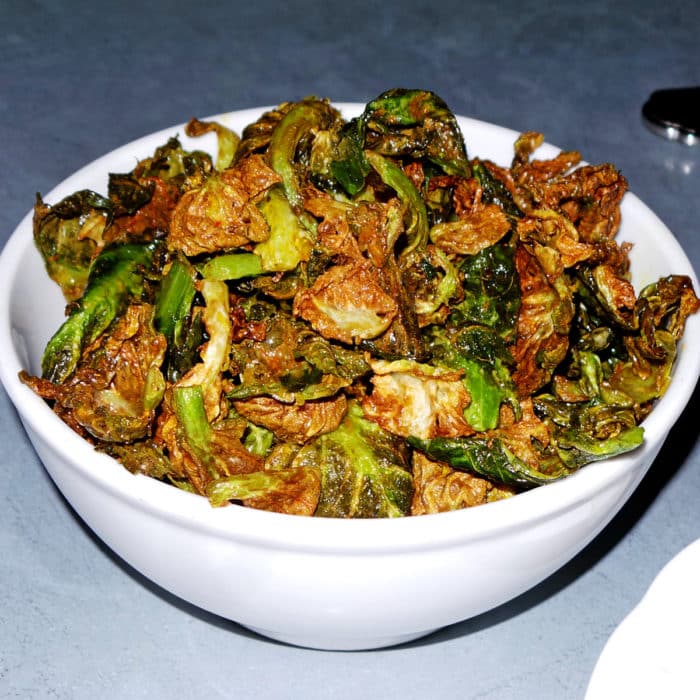 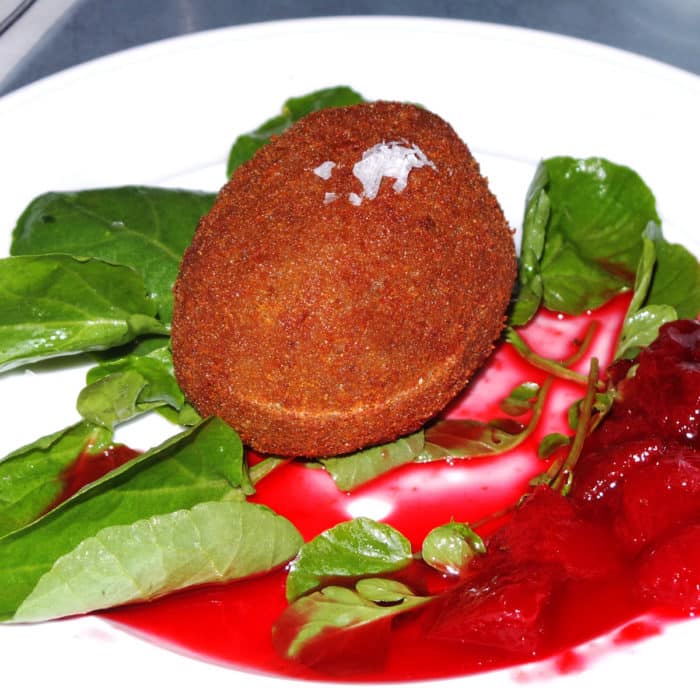 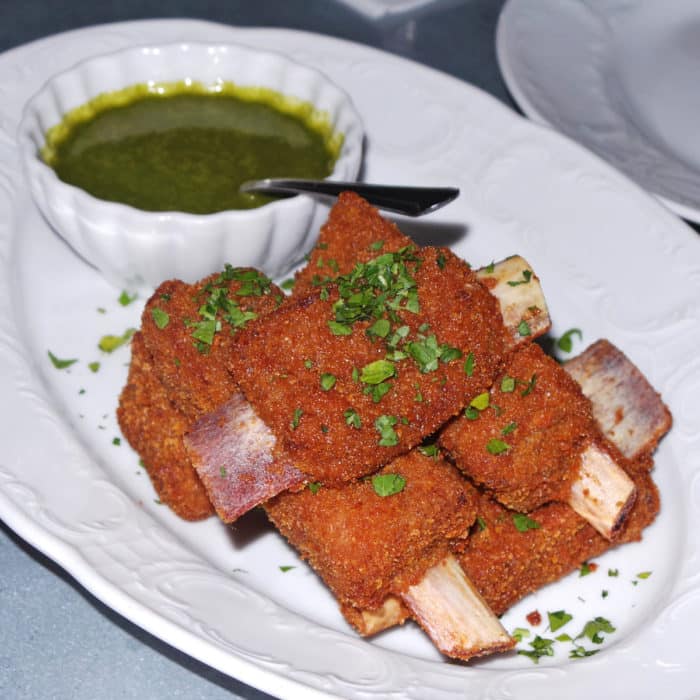 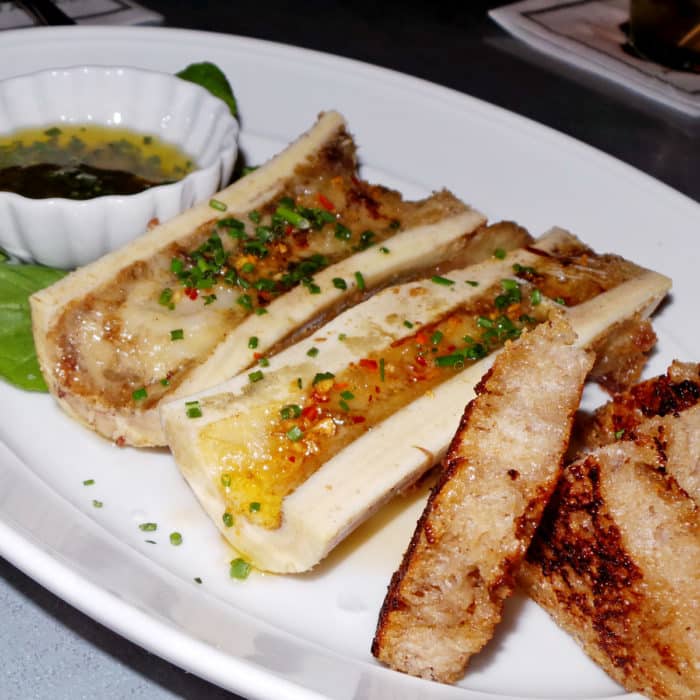 For instance, I tried another cocktail, this time opting for one outside of the Club Cocktail category. This drink, called Tea Thyme was very unusual. It was made with Earl Grey Tea and Gin and was garnished with a sprig of thyme. It had a very, shall we say, English flavor profile that’s I quite enjoyed. The tea flavor was quite strong, and while I liked it, I’m sure it’s a drink that not everyone will love. 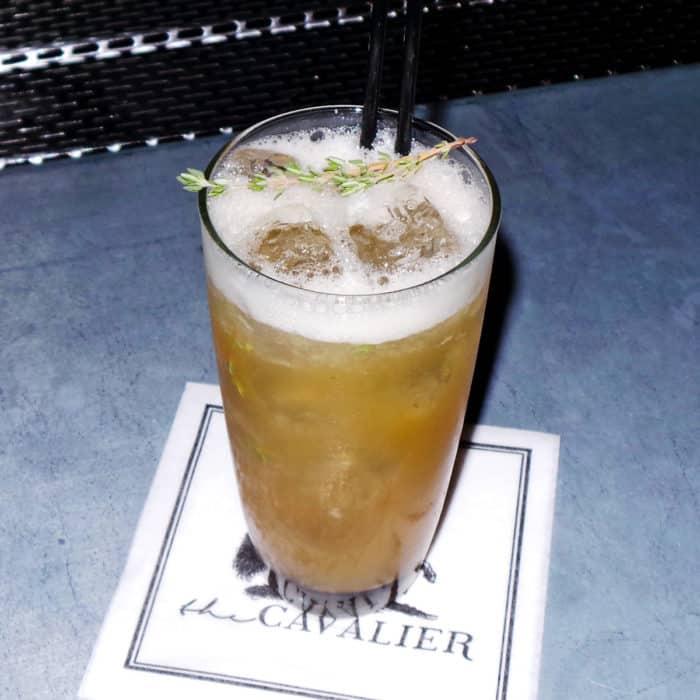 On my second visit, the Lamb Tartare special that I loved so much was not offered, but I was just as happy to order the Tartare of Angus Ribeye off the regular menu in its stead. Unsurprisingly, this tartare was also executed extraordinarily well. This one was less mayo-dressed and more caper-studded for a salty punch that I was really fond of. Once again, the tartare preparation allowed the quality of the raw meat to shine as it should. 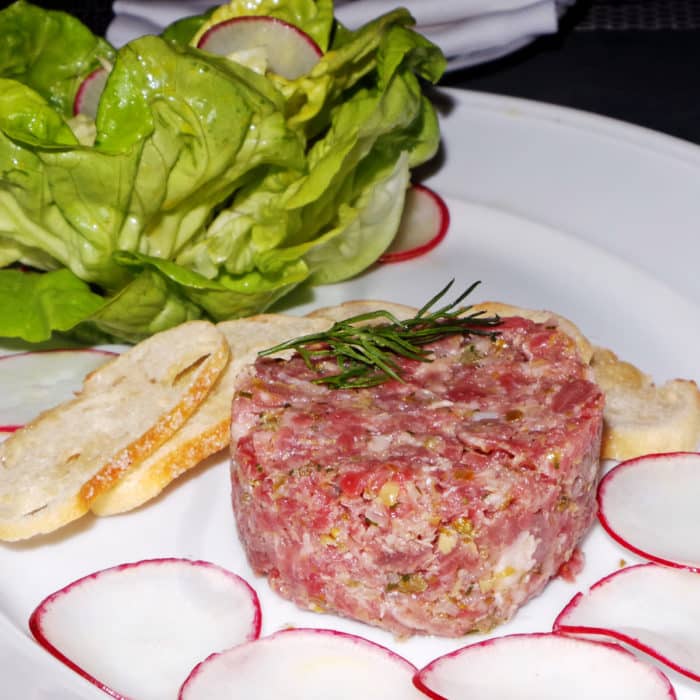 Finally, one final dish to round up this whole write-up, the unbelievable Welsh Rarebit Soufflé. Even though we had such a great experience with sweet dessert on our last meal, we decided to go a different direction this time.

This super-savory, light, fluffy, cheesy, dense, creamy, cake was INCREDIBLE. I don’t know how they achieved all of those opposing flavors and texture, but they did. I know I could have gone with another sweet dessert to close out my meal but I had absolutely no regrets diving into this gorgeous cheesy monstrosity instead. Cheesy, cheesy, cheesy soufflé. Rich, funky, and ridiculously satisfying. That’s what I like. 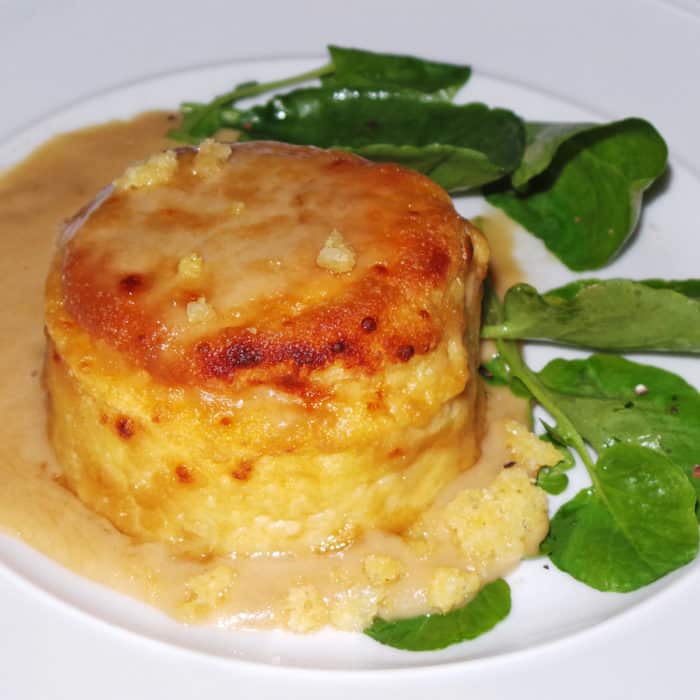 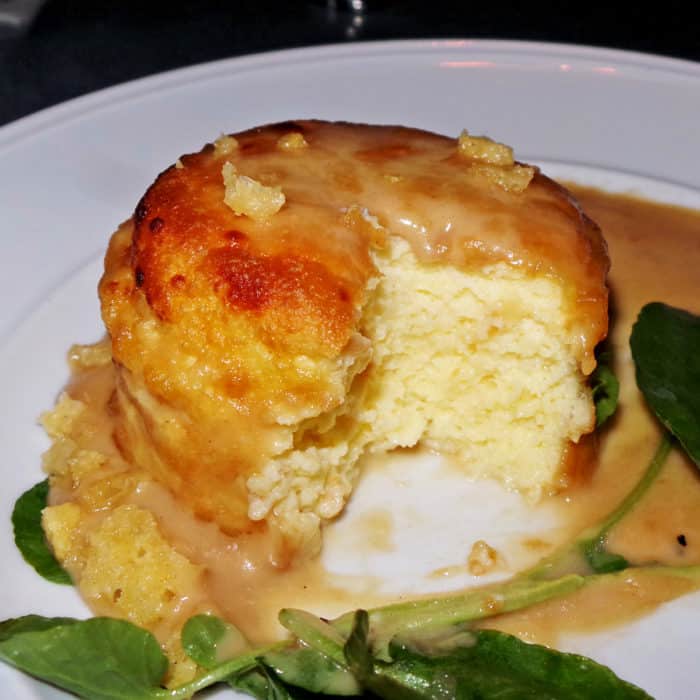 In conclusion, and I don’t take this lightly, but I feel that The Cavalier has truly earned its title as my new favorite restaurant in the world. I’ve done quite a lot of amazing eating around the world, so there’s a pretty outrageous heap of restaurants that The Cavalier’s throne sits atop.

There’s nothing cheap about dining there, so be ready to throw down some bills. But in exchange you will receive some of the most thoughtful, exciting, balanced, flavorful food and drinks you’ll ever have. It’s worth it. Run wild at The Cavalier.

Think you know a place that I’ll be even more obsessed with than The Cavalier? Let me know in the comments below.