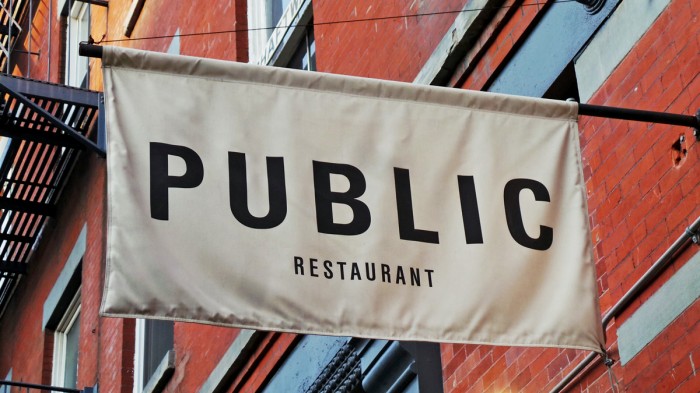 After knocking out two date nights from our NYC Bucket List and before relocating to San Francisco, we had time for one final meal with my family the evening before our departure. Public Restaurant was chosen by my mom firstly for it’s super-convenient location in Nolita but mostly because, and I quote, “it sounds like it’s got your kind of food”. That could be taken any number of ways, but I’ll just assume it’s because the menu is loaded up with unusual sounding game meat and other interesting sounding ingredients together in strange combinations and preparations. Yes Mom, that does sound like my kind of place indeed.

Public is a very attractive restaurant with a sort of cavernous hobbit-hole exposed-brick aesthetic. It’s situated in a trendy part of town that often attracts the cool-kid model-type crowd not too dissimilar to Beauty & Essex. But, the vibe at Public is much more laid back and far less clubby than at Beauty & Essex. This place was designed to be an impressive date night spot and it shows. 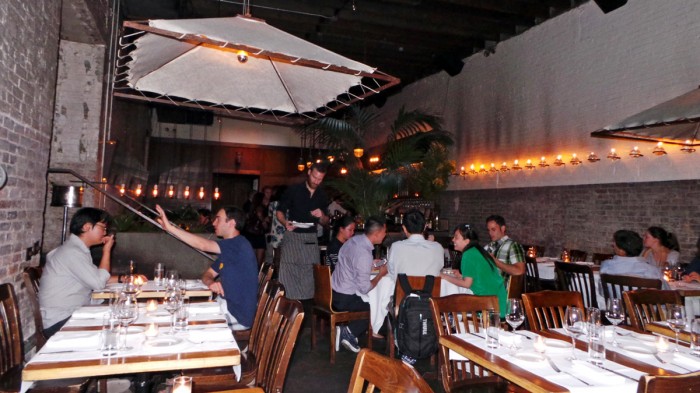 Since we were dining as a table of five, we ordered a number of appetizers to share amongst us starting with the Fried Puget Sound Oysters. These West Coast oysters were nicely fried in a cornmeal crust and were served on a shiso leaf with a sansho pepper and wasabi-yuzu dipping sauce. Our waitress instructed us to consume each one with the provided shiso leaf and stressed that it wasn’t there just for looks.

I agreed with the waitress that the shiso leaf added a nice herbal quality to each bite and the dipping sauce did a good job punching it up with a nice bold sinus burn, but I almost would have preferred these without the fried exterior. Similar to my critique of the fried lobster tacos at Beauty & Essex, I felt that the breading distracted from the delicious seafood more than it added. 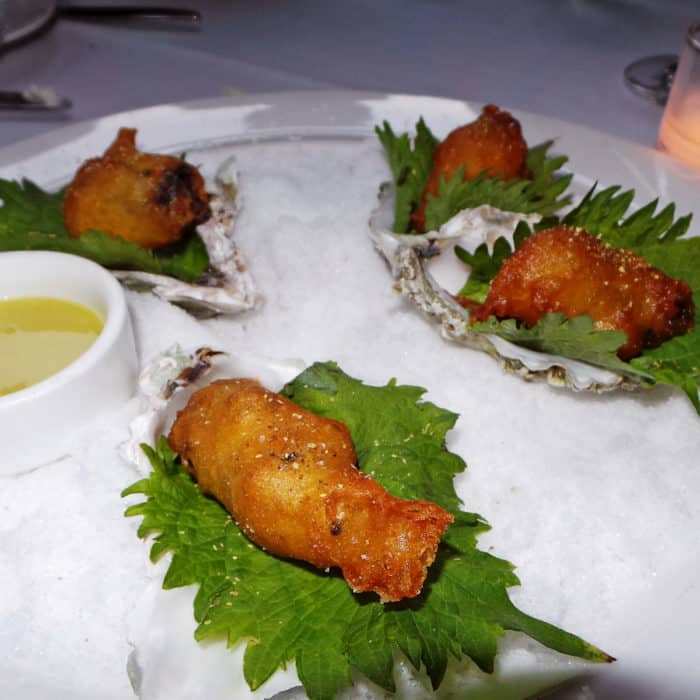 Next we dug into the Grilled Scallops which were topped with a sweet chili sauce, crème fraiche, and green plantain crisps and served over a bed of arugula. The scallops were delicious and all, but that sweet chili sauce stole the show. It was just so funky and unusual tasting, in a good way. Even just spread onto the leftover greens, I couldn’t get enough of that alluring sauce. I really couldn’t put my finger on what it was about it, but I was obsessed. 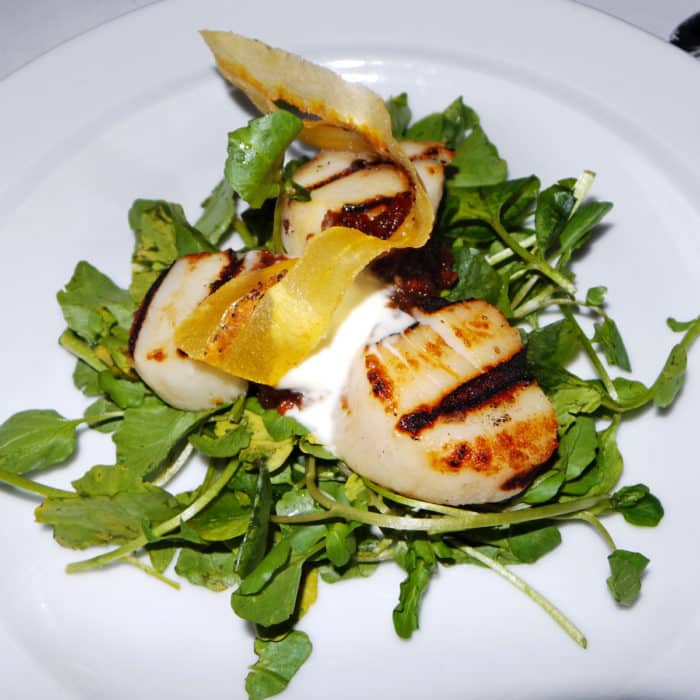 Then we had an appetizer I knew I couldn’t pass up the opportunity to try — Kangaroo Carpaccio. This wasn’t my first time eating kangaroo, actually. A few years back when I was in Sydney, I had a delicious pizza topped with slices of cooked kangaroo that tasted like a crossover between beef and chicken.

But an opportunity to eat kangaroo meat raw was not a chance I was going to pass up. The thin-sliced meat was topped with a massive bed of arugula dressed with roasted sunchokes, salsify noodles, and artichoke chips. When the dish first arrived, I was disappointed by what looked like a meager portion of meat, but there was actually three or four more slices of the raw kangaroo hidden beneath the greens. In carpaccio form, the meat was incredibly tender and fresh and in my opinion was best when consumed by itself to fully appreciate the extraordinary texture and subtly gaminess of the meat on its own. Actually, it reminded me quite a lot of that phenomenal lamb carpaccio I had recently had in San Francisco at Orexi — yes, that’s a compliment. 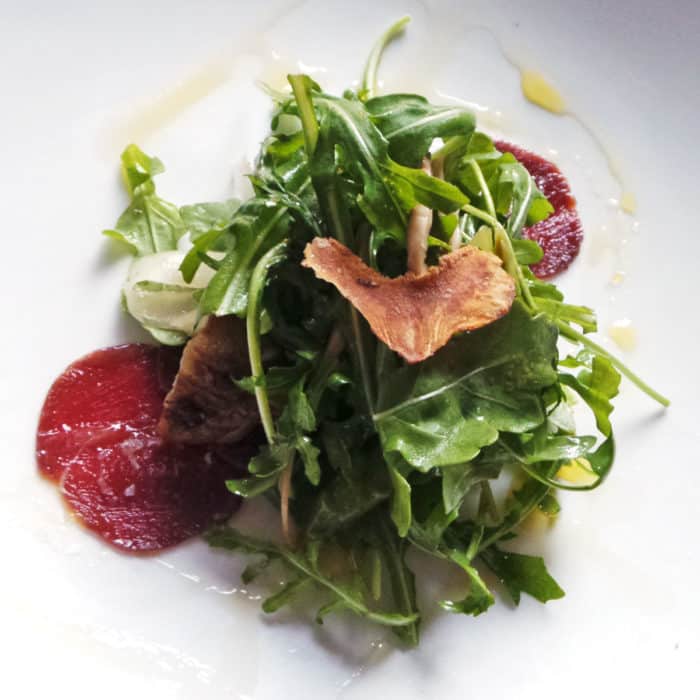 After that, we went at a Conch & Melon Summer Roll. Longtime readers may remember my trip to Turks & Caicos where my single mission was to try the local seafood specialty in as my preparations as possible including eating conch reproduction organs raw.

At Public, this riff on the classic Vietnamese summer roll was filled with hunks of this essentially flavorless sea creature, cubes of watermelon, pea shoot leaves, avocado, and jalapeño mayonnaise and was topped with wasabi tobiko. These were pleasant enough, but tasted mostly of the watermelon and I felt that the portion was fairly small. This dish was also pretty expensive and I unfortunately didn’t even really taste the conch in there. I’d recommend passing on this one. 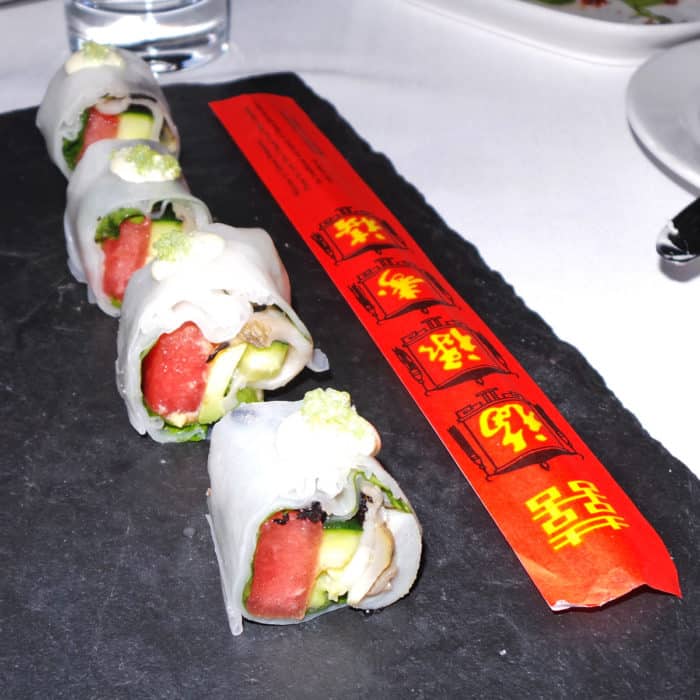 For Amy’s entree, she went with the Twice Cooked Duck which included both a duck breast and leg served in a mixture of pineapple, jicama, snow peas, bean sprouts, and peanuts with a tamarind caramel sauce. She was kind enough to let me steal away a few bites and I can confirm that it was outstanding. Every part of the dish was cooked to perfection. There was tender juicy meat inside, a crispy crackly skin outside, and a flavorful combination of Asian accompaniments that served the dish really well. 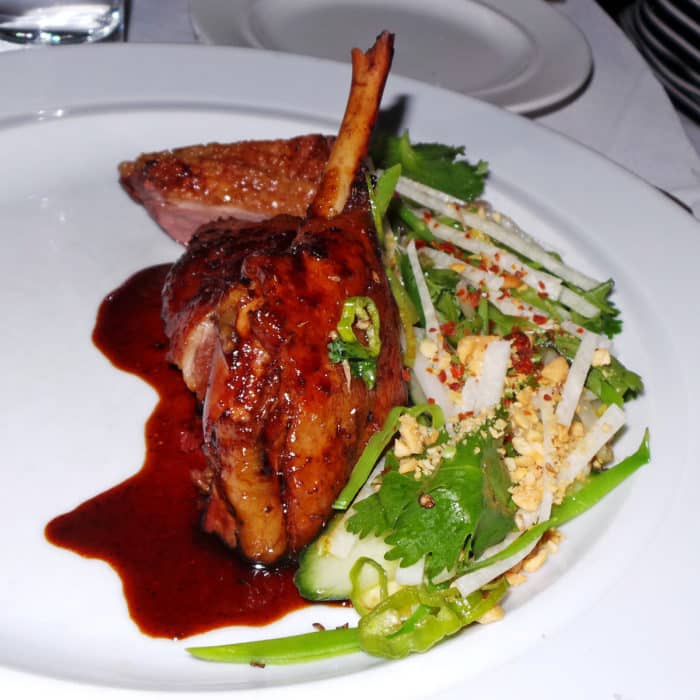 But when I was looking at the menu, I knew almost immediately which entrée I was going to select. The clearly Middle Eastern-influenced Harissa Goat Sausage and Goat Chop was absolutely screaming out to me. “EAT ME!” it shrieked. The two preparations of goat meat were served over a huge rectangular chickpea fritter patty along with a salty feta-laced fattoush salad and a saffron yogurt sauce. Yep, my mom was right, this did sound like my kind of food.

Obviously my recent sausage obsession was a big part of my attraction to this dish and I certainly wasn’t disappointed by the earthy, gamey, spiced goat sausage that was included. But the goat chop was the real star of the show. It was incredibly juicy and tender and had a wonderful, smokey, charred flavor on its exterior from the grill. When paired with the bright, salty, creamy yogurt sauce and feta cheese, everything was just perfect. 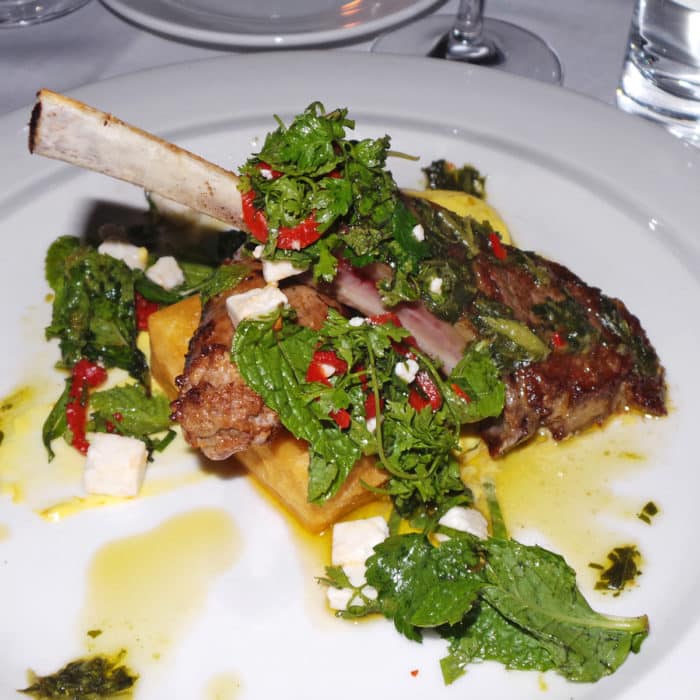 So, even though I’m not living in New York anymore, I’m sure I’ll be back to visit friends and family and crush a few meals. But I probably won’t be back for a few months, so I’m glad Public was able to provide me such an exciting sendoff meal and make my departure even more memorable.

Got another incredible New York dinner spot I need to hit up when I’m back in town? Let me know in the comments below.