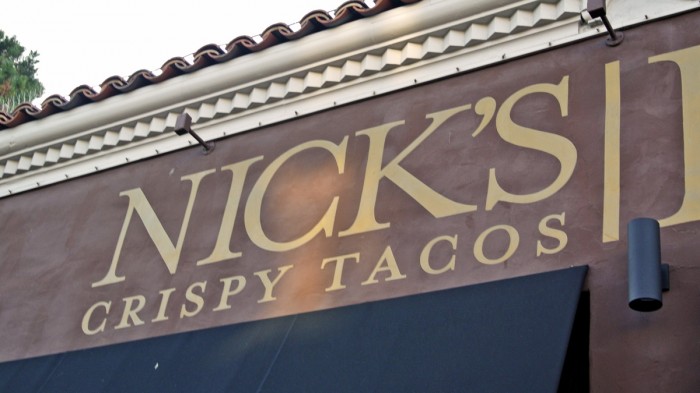 Have you ever had the desire to eat tacos in a strip club? Nah me either, but at Nick’s Crispy Tacos in Russian Hill you can do just that without all the… you know… herpes. And you’re going to want to do it too because these are some seriously awesome tacos. 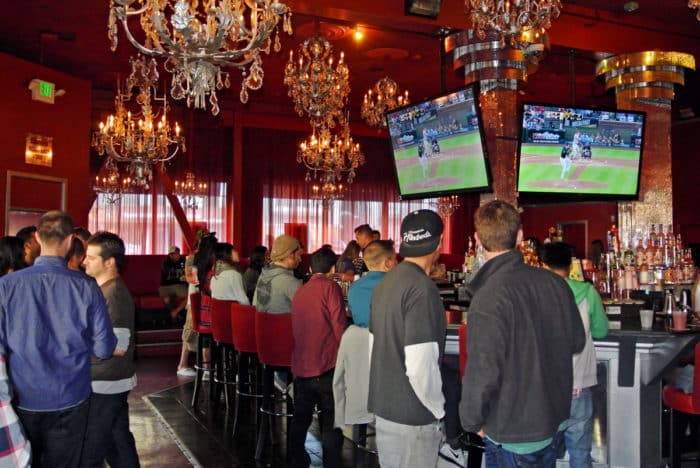 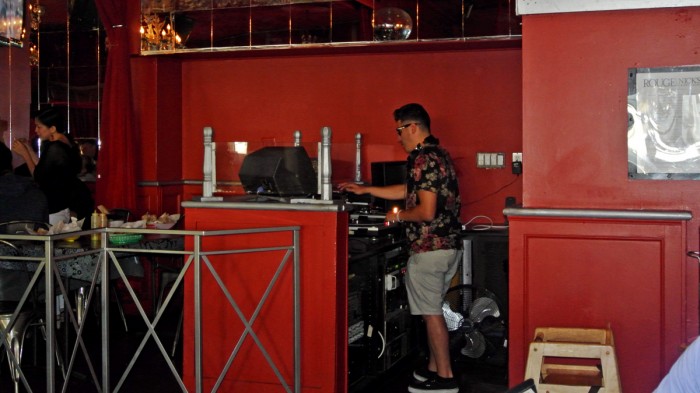 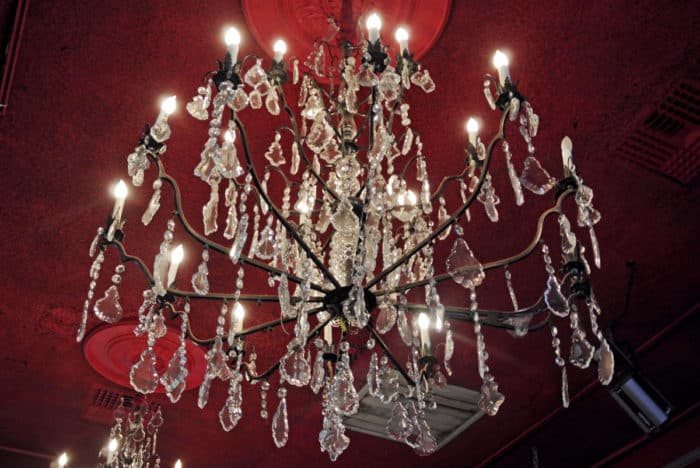 Nick’s isn’t actually a strip club and really isn’t a restaurant at all. It’s more of a food stand in the corner of a nightclub style bar called Rouge, but that’s besides the point. Actually, Rouge really was a burlesque at one point and all of the decor still exists as a nod to its previous incarnation. The locale still draws a rowdy crowd, but its a different kind of rowdy.

And as much fun as it is to go there to day-drink aggressively or dance your ass off to bumping club beats, you’re gonna also want to chow down on some epic tacos while you’re there. Nestled between red leather strip-club booths, in the back corner, there’s a cashier counter along with a menu posted on the wall. That’s where you can get your taco fix.

You can pretty much order anything, but I followed the advise I read on Foursquare and went with some fish and carnitas tacos and got them all “Nick’s Way”. Nick’s Way, as I soon learned, meant that for only a 95 cent upcharge your tacos would be crispified and loaded with jack cheese and a massive dollop of guacamole. Is the upcharge worth it? Absolutely. After I placed my order, I brought my numbered sign over to one of the high-top tables and waited for my heaping plate of tacos to arrive. 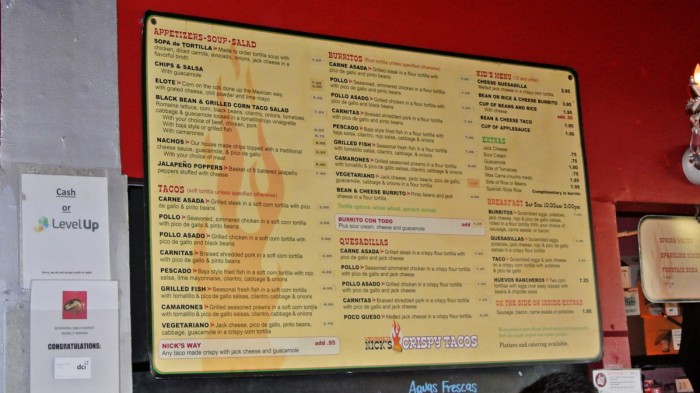 The tacos arrived astonishingly fast and I figured I should start with the Pescado Taco because it was made with beer-battered fried fish and was the most likely to degrade if I didn’t consume it immediately. The taco was absolutely massive and the fish was fried incredibly well. The flavor combination of the jack cheese, rojo salsa, and lime mayonnaise was really bold and vibrant but it was the citrus notes from the silky smooth guacamole that really made it.

But even more amazing than the delicious flavors in this taco were the textures. Obviously the fried fish added a nice crispiness, but the Nick’s Way signature method of frying the inner flour tortilla and wrapping it with a fresh soft tortilla was just incredible. The whole thing was truly extraordinary and most certainly better than you’d expect in this sort of atmosphere. 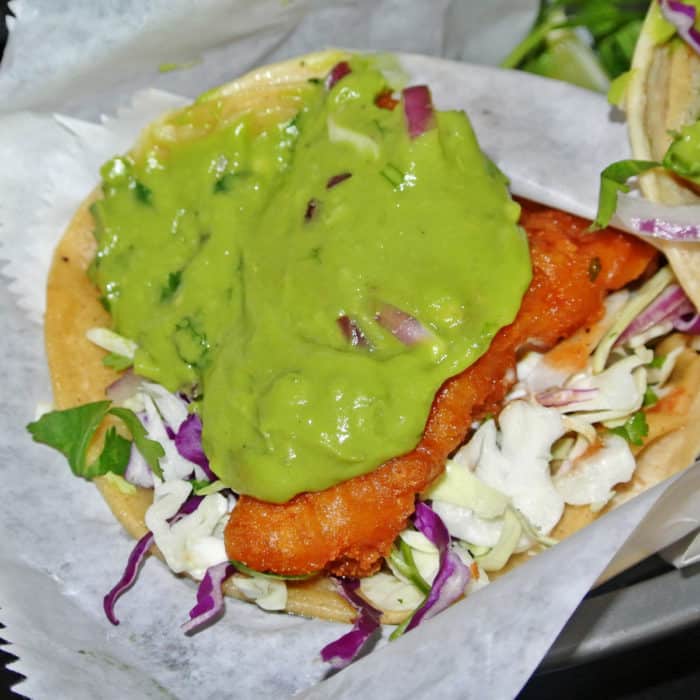 I next dug into the Grilled Fish Taco which was also prepared Nick’s Way. This was very similar to the Pescado Taco except that the fish was grilled and not fried. This was obviously the healthier way to go between the two fish preparations and though I obviously loved the previously consumed deep-fried version, this one was pretty damn good too. In my opinion, it wouldn’t be much of a sacrifice to choose the grilled variety if you’re looking to shave a few calories off of the meal. 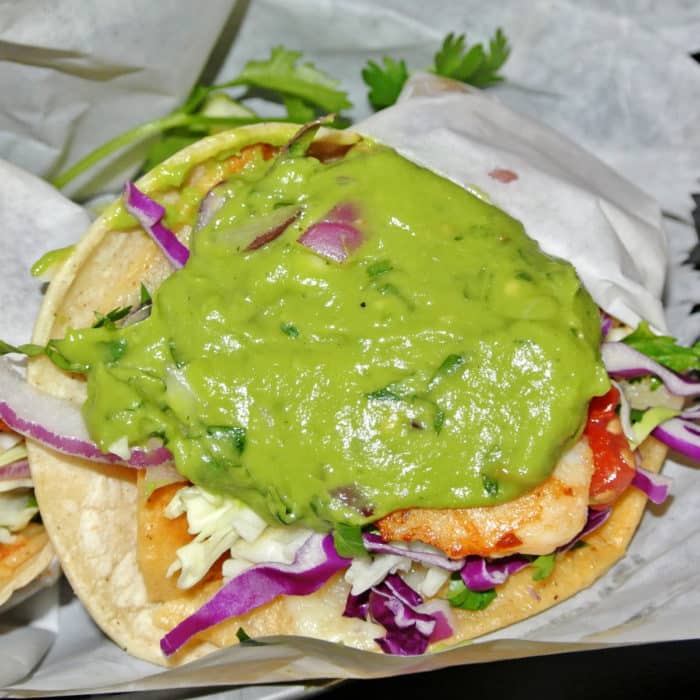 And finally, I tried one of the menu’s meatier options — the Carnitas Taco Nick’s Way. This one was also enormous and unsurprisingly extremely delicious. This taco was loaded with crispy, tender, shredded, braised pork and was garnished with pico de gallo, pinto beans, and all of the other Nick’s Way toppings. Every aspect of this taco was spot on. Just amazing, again. Especially when smothered in that excellent guacamole.

So if you’re looking for an unusual eating experience in San Francisco, you better make a trip Nick’s Crispy Tacos a top priority. Whether you feel like getting wild on the dance floor or just want to shovel ridiculously good tacos in your face, this is the place. Just remember the key words “Nick’s Way” and you’ll be set.

Got another really bizarre eatery in SF I should check out? Let me know in the comments below.

A Quiet, Classy, and Impressive Brunch at Maven in Lower Haight