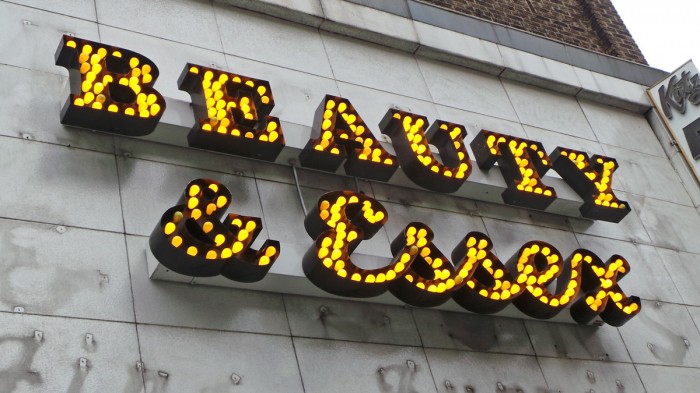 If you didn’t see it coming and haven’t heard the big news yet, Amy and I are relocating from NYC to San Francisco. So, there’s gonna be lots more West Coast eating and writing is on the horizon. But before making the move, we’ve had enough time for us each to pick one last date night spot to cross off of our NYC to-do lists. Amy’s pick was the ever-trendy Lower East Side cool-kid hot spot Beauty & Essex and mine was the shall-we-say more meat-centric Peter Luger’s Steakhouse which you can read about here.

Beauty & Essex is about as trendy as restaurants get in NYC. It’s actually as much a nightclub as it is a restaurant. It’s the kind of place you get decked out to go to drink fancy cocktails and nibble on small plates next to models and the who’s who of the NYC nightlife scene. You shouldn’t be surprised if you find yourself seated near to a celebrity or two — if you can get in. If you’re coming just for evening drinks, there’s likely to be a line wrapped around the block. Amy knew this was where she wanted to go, so she booked a reservation well in advance, so we had no problem getting seated for dinner though getting inside the restaurant was a bit of an adventure in its own right. 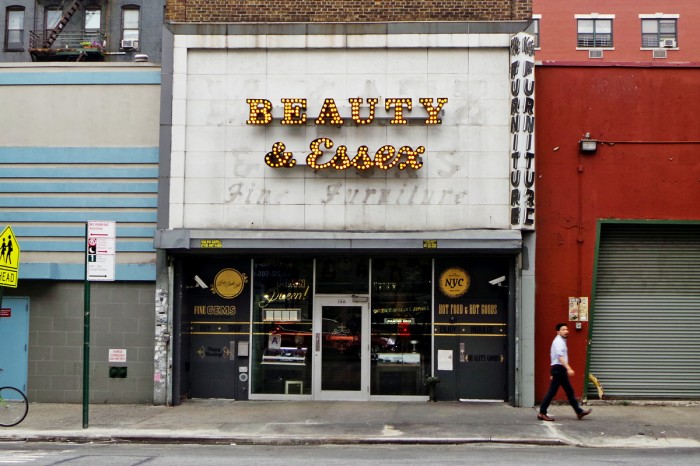 Beauty & Essex is a speakeasy restaurant and lounge that’s fronted by a fully functioning pawn shop. You need to walk to the back corner of the room and pass through the big, unmarked wood door before you’ve actually entered the restaurant space. Immediately you’ll find yourself confronted by the soft neon glow of bar lounge lighting, the aggressive thumping of club music, and the carefully curated velvet and leather stylings of a classic upscale restaurant with a vintage pawn shop edge.

Besides the obvious cool factor to the location, decor, and hidden speakeasy quality, one of the big draws to the restaurant is celebrity chef that owns and runs it. You may recognize Chris Santos from his many judging appearances on the Food Network show, Chopped. Having never visited his much loved first NYC restaurant Stanton Social, I didn’t really know what to expect from the food at Beauty & Essex. In fact, I’ll admit that I went in with pretty low expectations. I figured it was just a really trendy place that would be more concerned about feeling cool than about producing inventive, delicious food. As you’ll soon see, my preconceived notions were wrong. 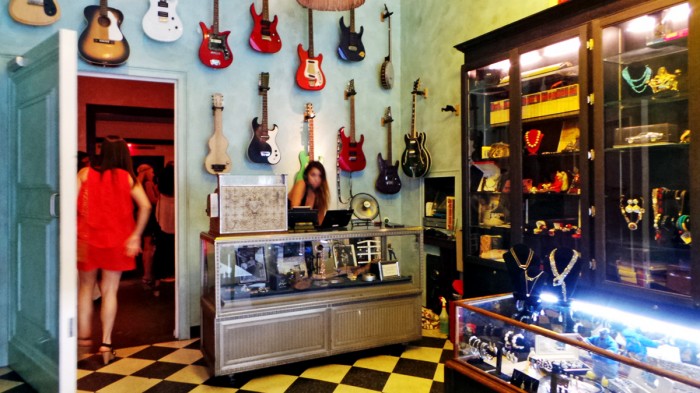 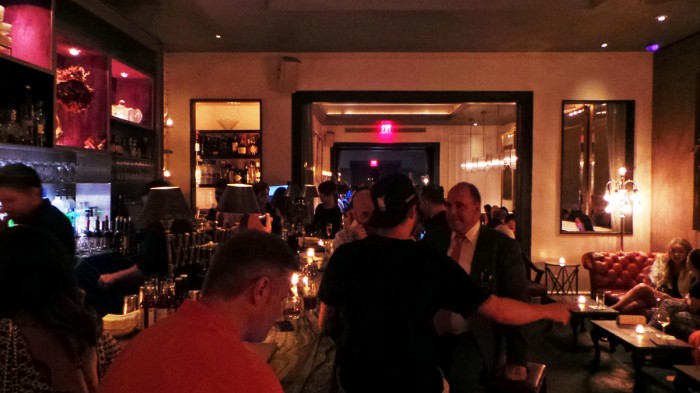 Though we made a reservation, after approaching the front desk, we were still handed a buzzer and asked to wait while they got our table set up. We took the opportunity to go straight to the main bar and order a round of cocktails while we waited. Immediately as we placed our drink order, our buzzer went off, so we carefully carried our cocktails upstairs with us where our table was waiting. I guess we got a little too anxious. Bad timing on our part. Also, I got the sense that they segregate the restaurant between the top of bottom floors. I think the downstairs serves the trendy singles crowd and the upstairs, where we were relegated, is for couples on dates and family gatherings. Guess we’re not cool enough to be seated downstairs.

Nonetheless we took our table and sipped our cocktails while we looked over the menu. I began with a drink called the Smooth Criminal made with Illegal Mezcal, lemon juice, lime juice, and peach purée. Though it was rather pricey at $15 for a cocktail, it was still a really nice drink. It tasted like a really smokey, complex margarita. 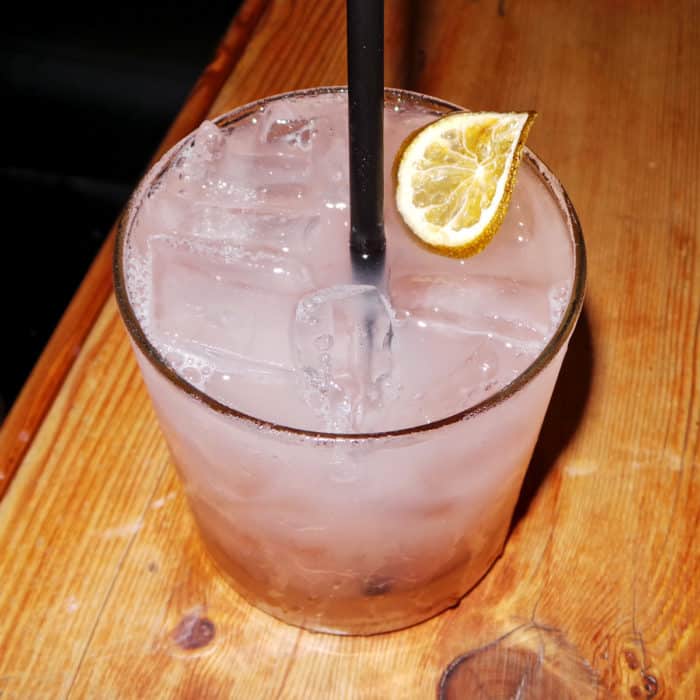 I could have guessed which cocktail Amy would select. She started with a drink called The Woodsman which included all of her usual ingredients and flavors and sounded right up her alley. It was made with Woodford Reserve Bourbon, allspice Dram, maple syrup, lemon juice, and muddled pears. The cocktail was very spirit-forward and had a ton of those wintery-spice flavors she loves so much. This was another well-conceived drink, though also admittedly pricey. 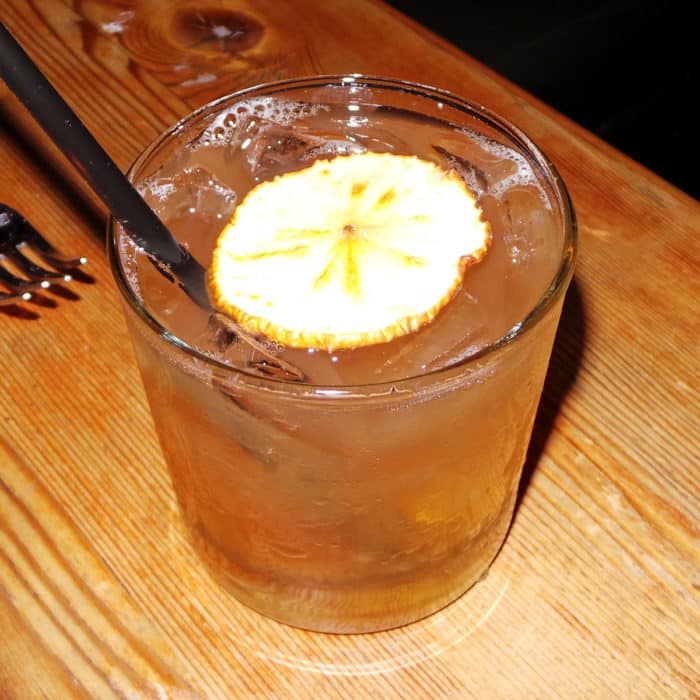 Just as we figured out what to order for dinner, an amuse bouche arrived at the table for each of us. Served in ceramic white shot glasses was a Cucumber Gazpacho dressed with crema and cilantro. It was very cold and refreshing, had an interesting pulpy texture, and a sort of bell pepper flavor followed by a strong, herbal cilantro punch at end. We both appreciated the complimentary starter. 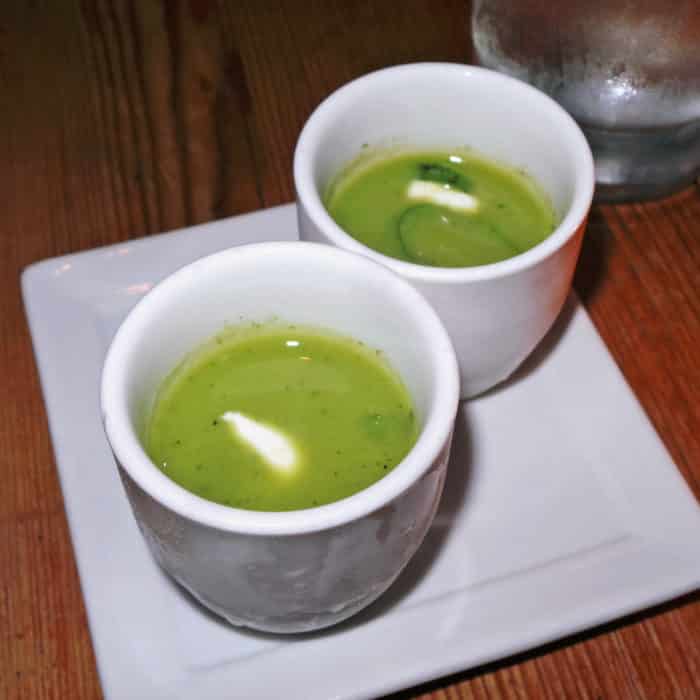 Shortly after, the first of our small plates arrived. The Sashimi of Tuna Tonnato Style was dressed with lemon zested olive oil, crunchy chorizo, sea salt, and a really unique creamy topping. I think the dish was meant to play off of the idea of the Italian veal dish Vitello Tonnato which in its classic incarnation tops cold veal with a tuna flavored mayo sauce.

I can’t say the inspiration sounds particularly appealing, but this riff on it was incredible. The raw slices of tuna were super high quality and there was such a complex layering of flavors and textures in the dish, particularly from the creamy sauce on top, but especially from the crunchy fried chorizo cube adornment. Every element of this seemingly simple dish played together perfectly and the plating was beautiful. This ended up being one of our favorite bites of the meal. 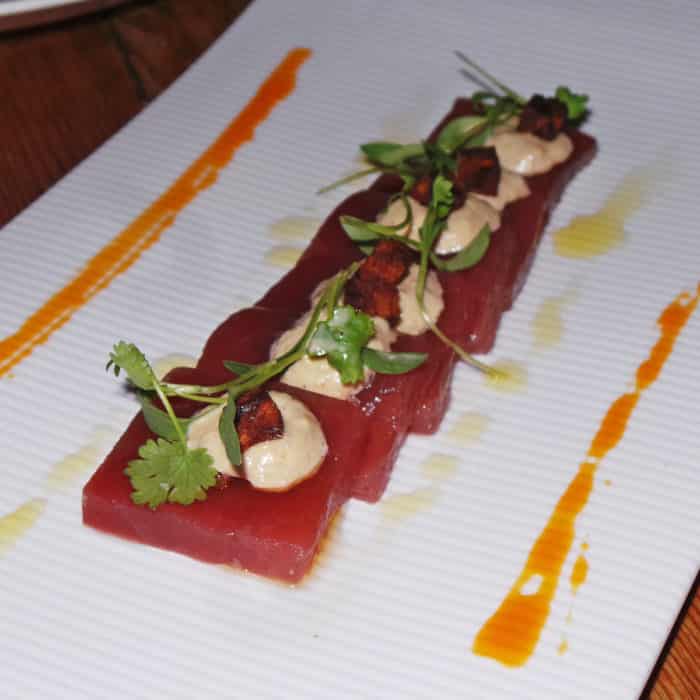 Next to arrive were the Lobster Tacos, which came three to an order. Most of the Foursquare tips at Beauty & Essex raved about this dish, so we kind of had to go for it, even though it’s pretty pricey at $21 for the plate. Each of the three tacos included a massive hunk of beer battered Maine lobster topped with slaw and spiced cream. There really was quite a lot of excellent, fresh lobster meat in there.

But honestly, we both agreed that it would have been even better without the fried beer batter coating. I know — blasphemy. I think the fried exterior is what people love about it, but we thought it was more distracting than beneficial and detracted from the textural and flavor subtleties that make lobster meat so wonderful. 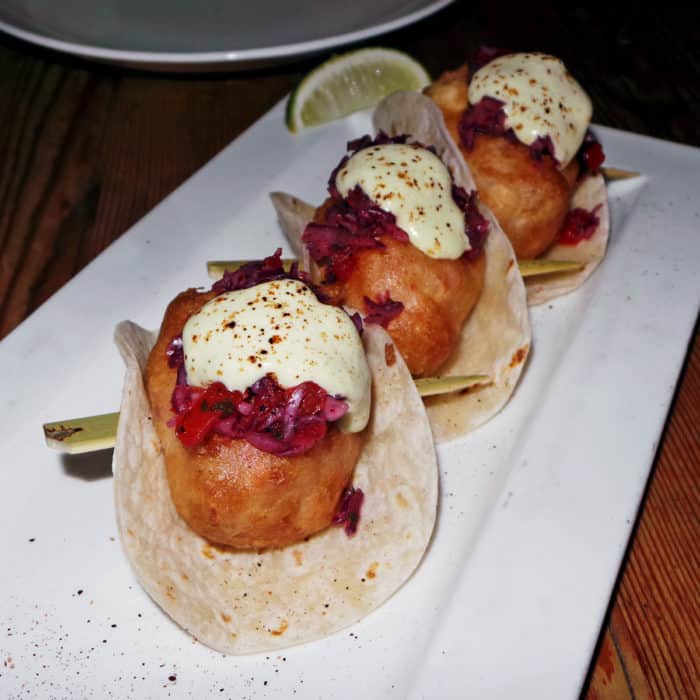 Instead, if you want lobster, I suggest getting the Lobster ‘Mac & Cheese’ which was one of the most incredible versions of mac and cheese either of us has ever had. Everything about it from the thick and creamy texture, to the chewy spiraled noodles that sopped up the cheese so well, to the oceany meaty lobster bits, to the crunchy Sicilian bread crumb topping were top notch. At only $15, this heaping skillet of ooey-gooey deliciousness was a steal. 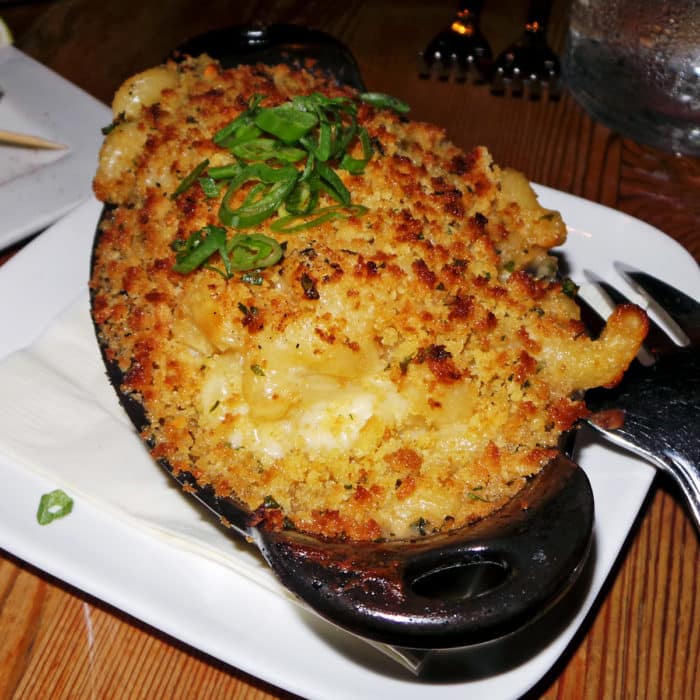 But if there was one dish on the menu I absolutely knew I had to have, this next one was it. The Grilled Cheese, Smoked Bacon, and Tomato Soup Dumplings were a riff on the now-famed French Onion Soup Dumplings concocted at Chris Santos’ other restaurant, Stanton Social, which in itself was a riff on the much loved Shanghaiese Xiao Long Bao “Soup Dumplings”.

Each of these six soup dumplings came served as individual prepared bites on their own wonton soup spoons. A magical cheese-filled and cheese-wrapped dumpling was seated in a spoonful of creamy tomato soup, each one ready for the eating. The texture of each grilled cheese dumpling was pretty amazing, made from a blistered cheese skin pouch wrapped around internal molten cheese. Each one was sprinkled with crispy bacon bits and when slurped up with a spoonful of hot tomato soup was totally reminiscent of the grade-school classic. This was childhood comfort food warped through Chris Santos’ brilliant mind. 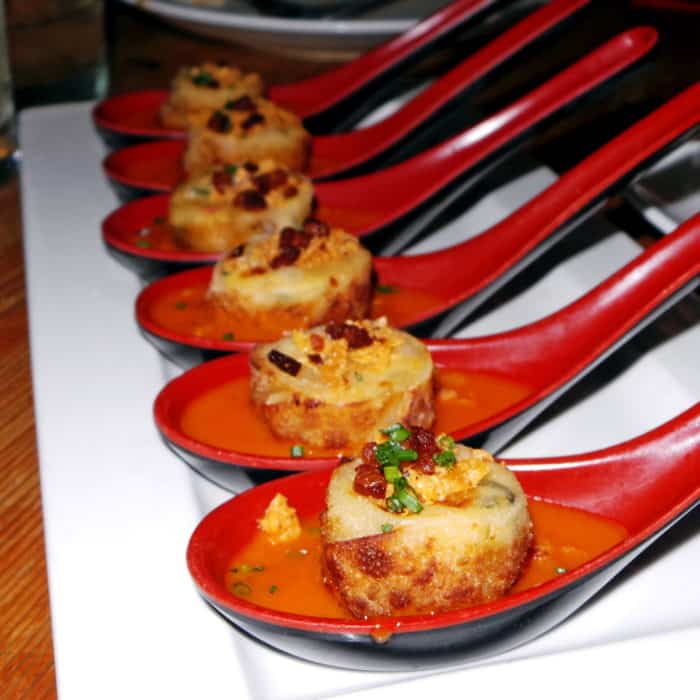 There were enough complex flavors happening in this hearty bowl to keep me digging ’til I was scraping the bottom clean. If I had one minor quibble with this dish, I’d say that I wished the chips retained just a touch more of their original crispiness. But at $15, this huge, filling bowl of awesomeness was another killer offering. 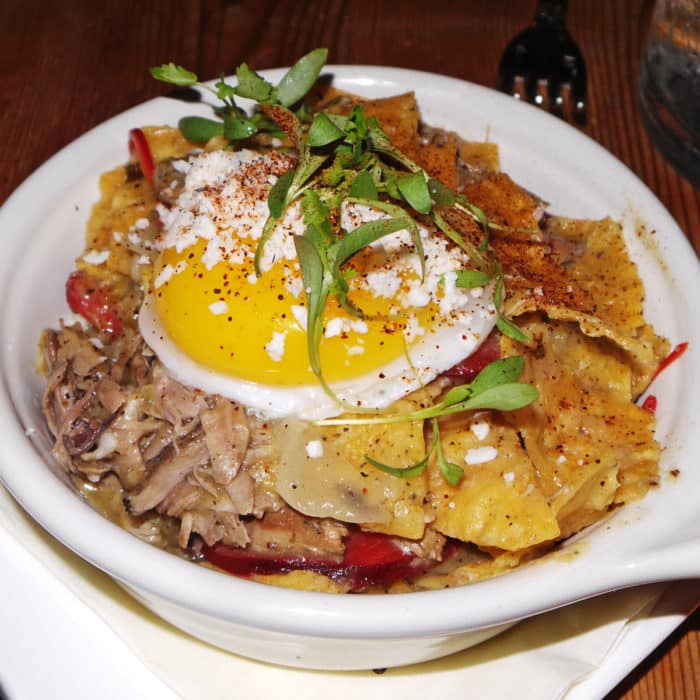 So, as you can see I didn’t go in to Beauty & Essex expecting much more than a trendy scene and overpriced mediocre food, but found myself walking away stuffed and utterly impressed. Yes, it’s still gonna cost you to eat and drink there, but nearly everything we ate was impressive and worth the splurge. Bring your girl out on a date to Beauty & Essex, she’ll love it.

Got another swanky date night spot that is actually much better than expected? Let me know in the comments below.