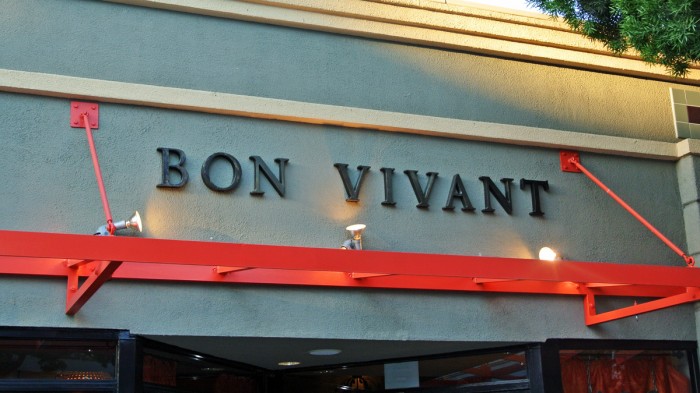 I can’t remember the last time I knowingly dined at a restaurant with such a low Foursquare rating. At the time when I sat down at Bon Vivant in Palo Alto, they scored a measly 5.3 illustrated with a bold red background. I didn’t let that deter me. I was looking for a relaxing solo diner at an outdoor table and that’s exactly what I found at this restaurant.

When I stepped inside, I found myself in a fairly formal dining room that was nearly empty and staffed by a single tuxedo-wearing waitress. That was a feeling a little too proper for my mood and I wanted to enjoy the beautiful weather and sunset while I ate so I requested to sit outside. When I made the request, it seemed like I was the first person to make the request — ever. I know I’m a New Yorker at heart, but come on, it was 85 degrees out. It was a perfect night for al fresco dining at sunset. 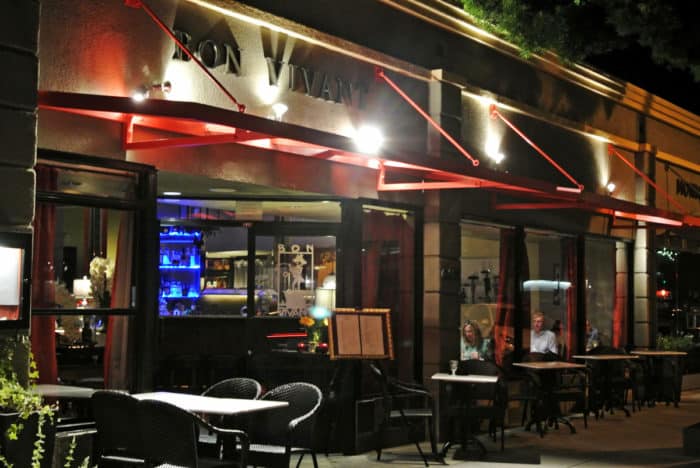 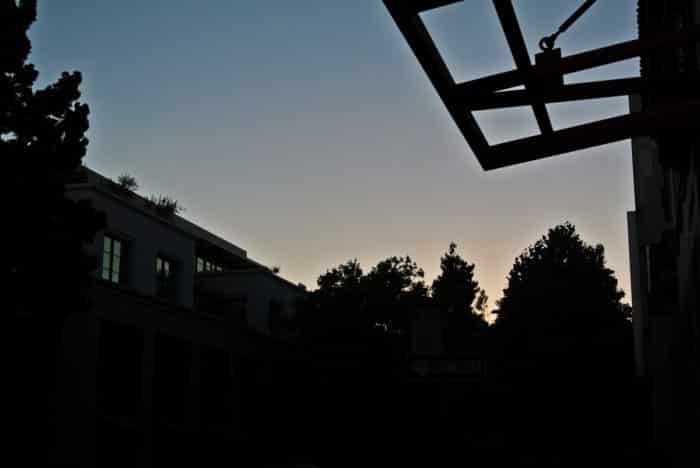 I took my place out front and ordered a glass of Californian Wattle Creek Sauvignon Blanc Red Wine (I didn’t know there were white Sauvignon Blanc wines!) and enjoyed the beautiful weather while watching the Palo Alto locals pass by. Actually, this restaurant would be pretty easy to walk right past if you weren’t looking for it and I think my presence outside drew them a lot of attention. I constantly heard Palo Alto locals pondering, “Bon Vivant? Is this new?” or “I’ve never noticed this place before.”

And though I was enjoying my wine and the outdoor weather, service was still pretty slow. There was just one server working the whole restaurant after all. I definitely waited quite a long time for any of my dishes to arrive and I think that is probably the biggest reason this restaurant is rated so poorly online. That and the relatively high prices. But after what felt like a lifetime, my first dish, the French Onion Soup, finally arrived.

The French Onion Soup came served in traditional elevated ceramic bowl and had a thick, browned layer of cheesy goodness coating the top. I immediately gave it a stir because I know from prior experience with this kind of soup that it is always scalding hot beneath that surface cheese. Even with my patience and constant spoon-blowing, I still managed to burn the entire roof of my mouth, but that’s OK, because I still really enjoyed every spoonful of this caramelized onion and bread-hunk loaded soup. The portion was quite nice and it served as a very filling and delicious start to my meal. 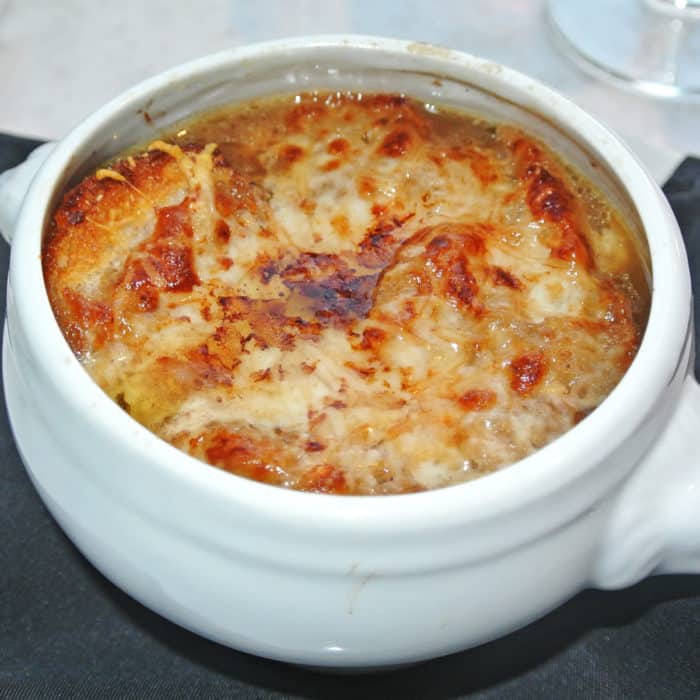 Shortly thereafter my tartare arrived and it looked magnificent. The finely chopped, lightly dressed raw beef was served in a sort of bottomless martini glass over ice. It was topped with a raw duck egg yolk along with a bowl of toast points and a pile of housemade shoestring fries.

I immediately popped the yolk and allowed it to run all over the glistening mayo-coated raw beef. While I stirred up the mixture, I simultaneously went for a bite of the french fries since I was still rather hungry from the sluggish meal pace. Though a little limp in texture, the flavor of the fries was truly excellent. They were generously sprinkled with truffle salt and yes, it was flake salt with real black truffle flecks, not just the usual fake truffle oil flavor you find restaurants using as a crutch so liberally.

Once I had stirred until I was content, I attacked the glass of tartare. This beef tasted just as good as it looked. It was prepared really nicely and though at first glance I had doubts about the portion, after really diving in, my first impression was proven wrong. This excellent tartare really hit the spot and the portion was more than generous. 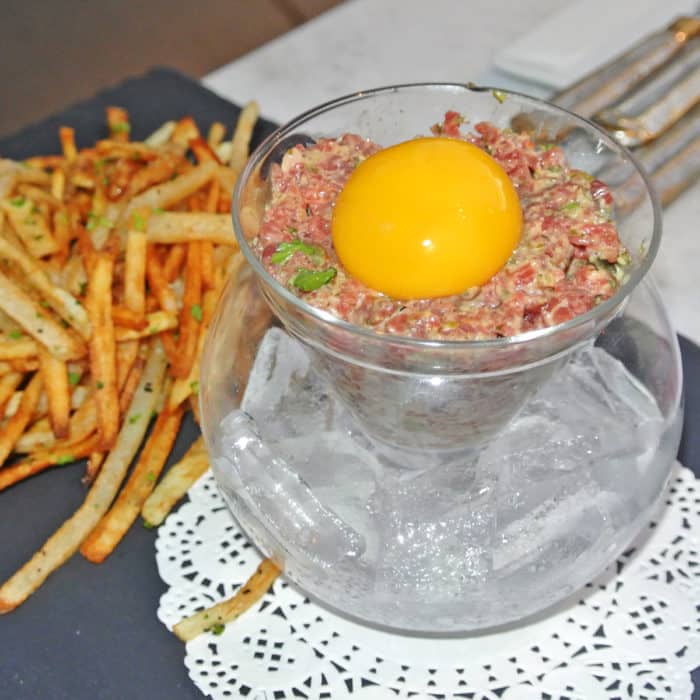 Then I waited again. The sun was deep into setting and I had already finished my wine but I still had one more small plate on the way. After what seemed like an eternity, my seared scallops entrée arrived. These large sea scallops were caramelized nicely on both sides but still allowed the inside to remain raw and tender how they should be.

These two plump scallops were served in a saffron sauce, a puree of some sort, and with a big piece of mother-fucking BACON. How’d they know! I love bacon!?! Though I didn’t care much for the puree which was too sweet, the scallops and crispy-smokey bacon really did it for me. Also, I didn’t really notice it until after I looked back at the photo but that scallop and bacon plating was curiously phallic. Just saying… 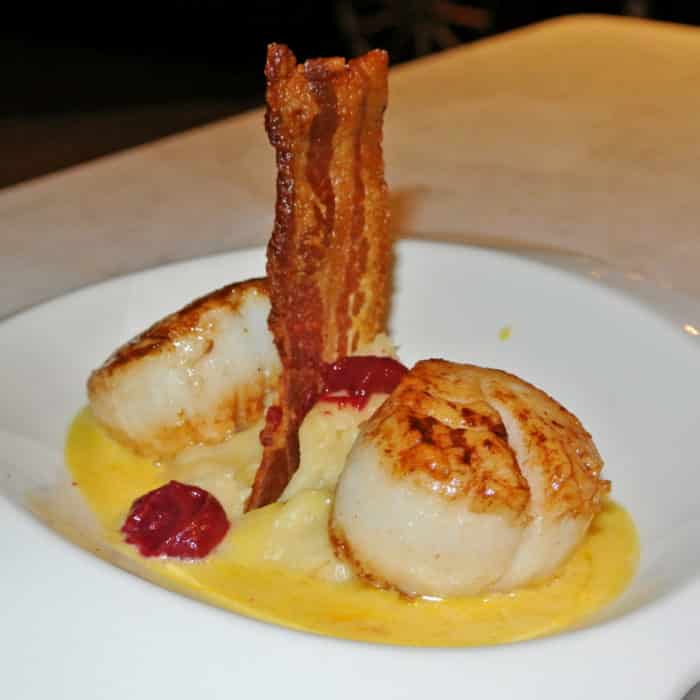 So if you’re looking for a dinner alternate to your Palo Alto usuals like NOLA, Vero, and Evvia, don’t rule out Bon Vivant just because they get low ratings online. Though the touch-high prices and sluggish service may in fact make their score deserved, the food and wine really was great. And the waitress called me monsieur. I liked that.

Know of another dinner date spot in Silicon Valley that’s better than what you’d expected based on score alone? Let me know in the comments below.