I’ve said it before, I’ll say it again. It ain’t easy finding great restaurants out in Silicon Valley, but they do exist if you look hard enough. Downtown Mountain View has proven over and over again that it’s loaded with great spots and the Latin inspired tapas joint Cascal is no exception. Buckle up, this is gonna be a long one. But I guess that’s bound to happen when you dine tapas style as a party of eight. I’ll try to keep my commentary concise because honestly all of the food was really awesome.

The restaurant was very spacious – actually massive, with lofty looming ceilings and columns that you just couldn’t have in NYC. It’s got a sexy, tropical vibe that wouldn’t be out of place in Miami and would definitely lend itself well to a date night out should you need one in the area.

We began the meal with some cocktails, no surprise there. I chose the Caipirinha, a cocktail I frequently enjoy but only order in places like this where I think it will be made properly. It was definitely made well and had plenty of lime pulp and muddled herbs floating throughout though it may have been a bit too sour for my taste. 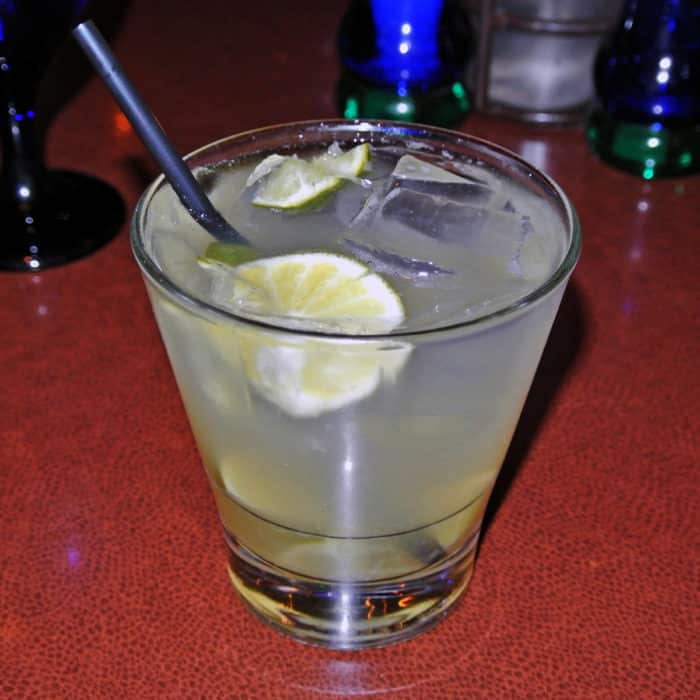 The first dish of the night was the Peruvian Ceviche which was made with fresh white fish that was marinated in fresh lime juice, red onion, fresh ginger, chili arbol, sea salt. It was quite delicious, but I much preferred the second of the two ceviches we ordered. 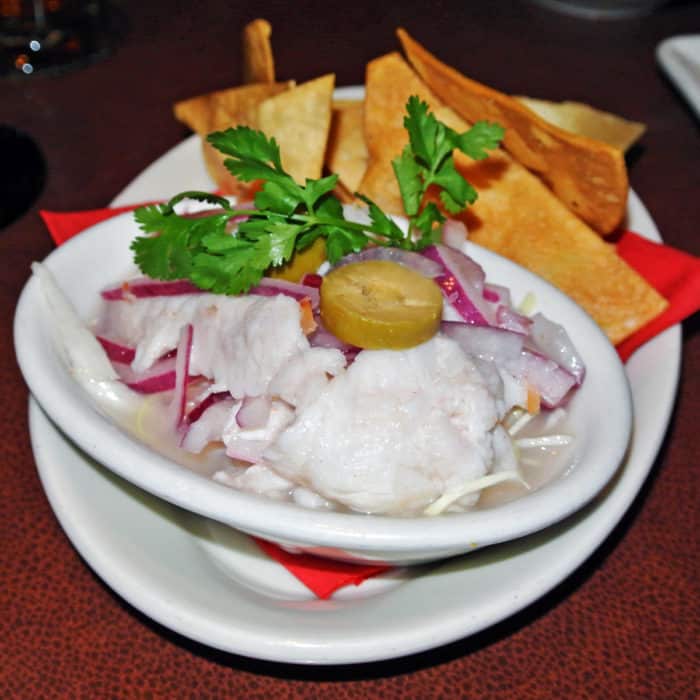 The Scallop Ceviche which was made with raw scallops in a coconut and lime marinade with diced mango, Serrano chiles, and pickled red onion was incredible. The texture of the barely acid-cooked seafood was amazing and the creamy coconut milk, citrus, and spice flavors all combined really well.

Next was the Sizzling Shrimp which were served in a hot ceramic bowl with plenty of garlicky “Mojo de Ajo”, EVOO, garlic, chile de árbol, and fresh lime. The shrimp were cooked well and had nice flavors, but were ultimately pretty straight-forward flavorwise and the portion was arguably a little stingy. 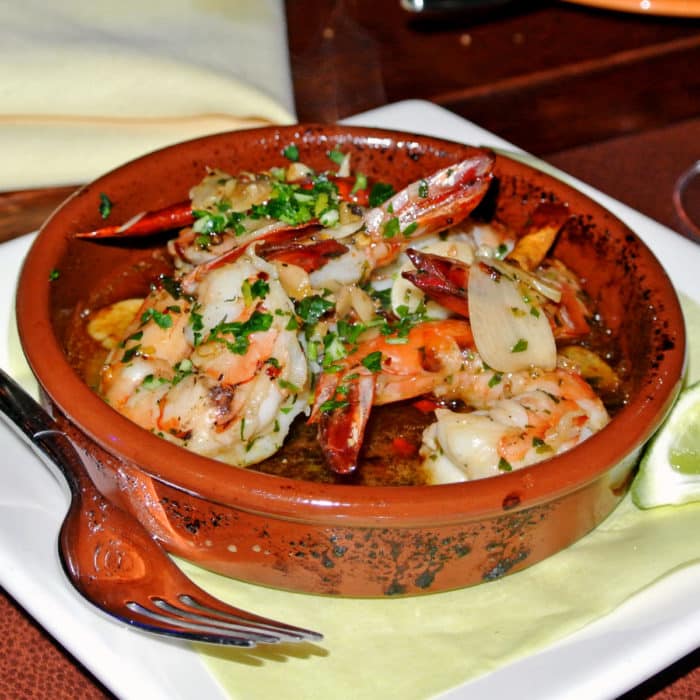 Then we had the Roasted Chile Relleno which consisted of an entire over-roasted poblano chile, stuffed with a three cheese filling and served in a pool of piquillo pepper and goat cheese sauce. I don’t usually rave about completely vegetarian dishes, but this cheesy monstrosity was really flavorful and definitely delicious. Even we meat-eaters can get down with this dish. 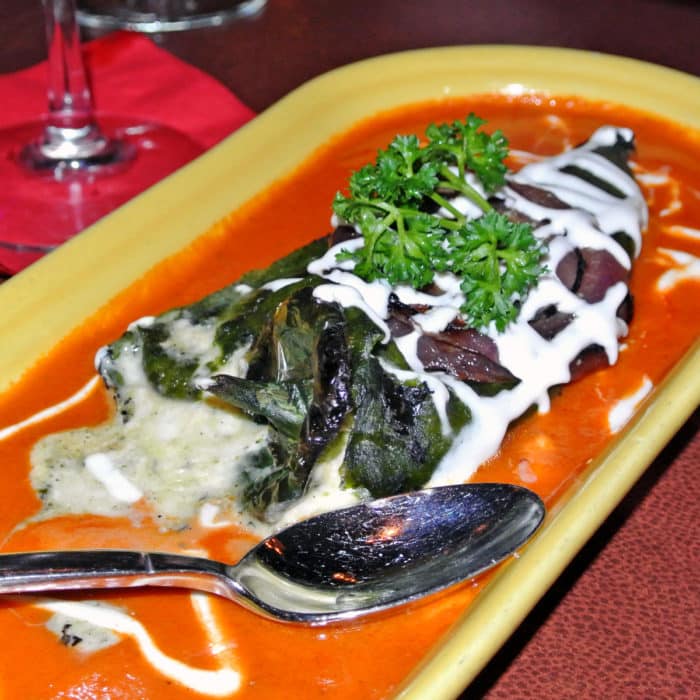 Next up was the Roasted Brussels Sprouts which were marinated then roasted and served over a white truffle aioli and topped with shaved Manchego cheese and crisp Serrano ham slivers. Just tell me that doesn’t sound delicious. The flavors were very bold and the plentiful smokey Serrano ham bits really made the dish. 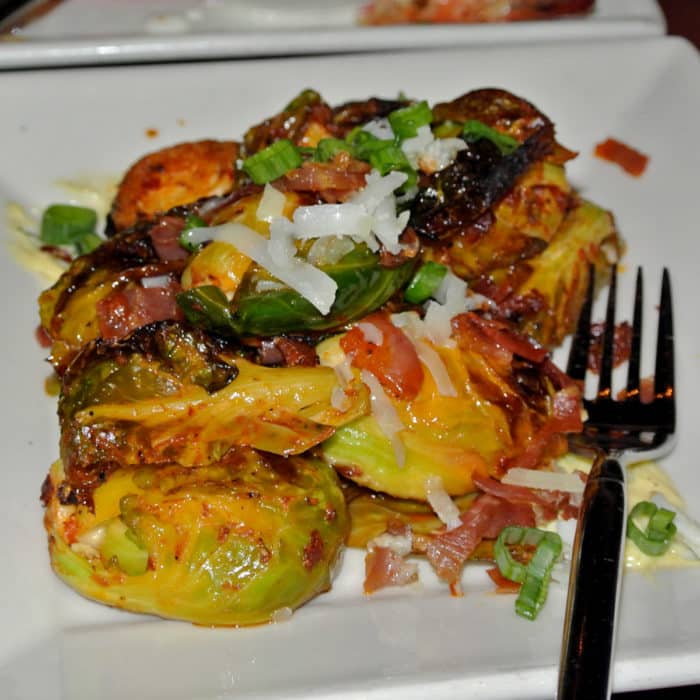 Next, we had the Wild Mushroom Empanadas which came three to an order and were stuffed with Manchego cheese, a variety of mushrooms, and truffle oil. The flaky pastry exterior was excellent and served as a nice vessel to transport the earthy mushroom and cheese filling to my mouth. 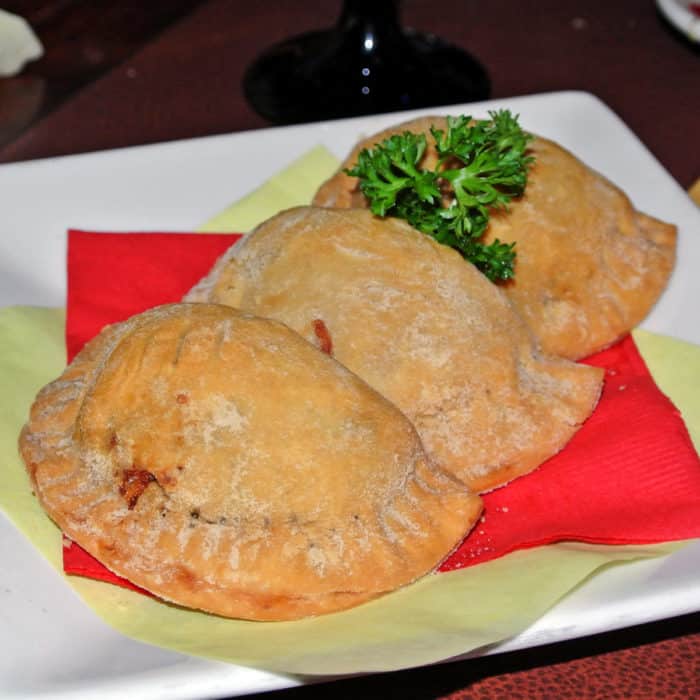 After that, the Lamb Chops which were marinated then grilled and served over patatas bravas. They were cooked phenomenally and were super-flavorful and juicy from the marinade even before the tasty addition of chimichurri over top the nicely charred meat. 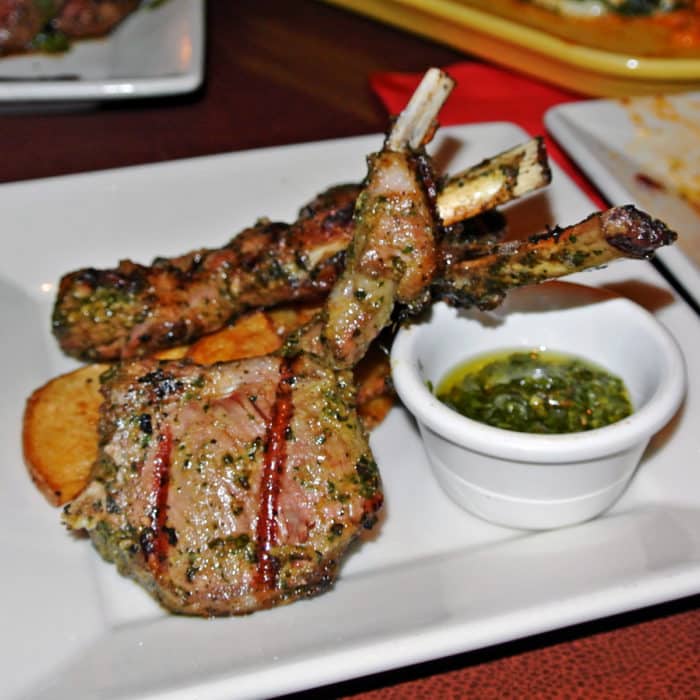 We also had the Churrasco which was marinated flat iron steak slices topped with a melty, rich, funky cabrales blue cheese butter and some more chimichurri. This unsurprisingly was also boldly flavored, delicious, and really nicely cooked. 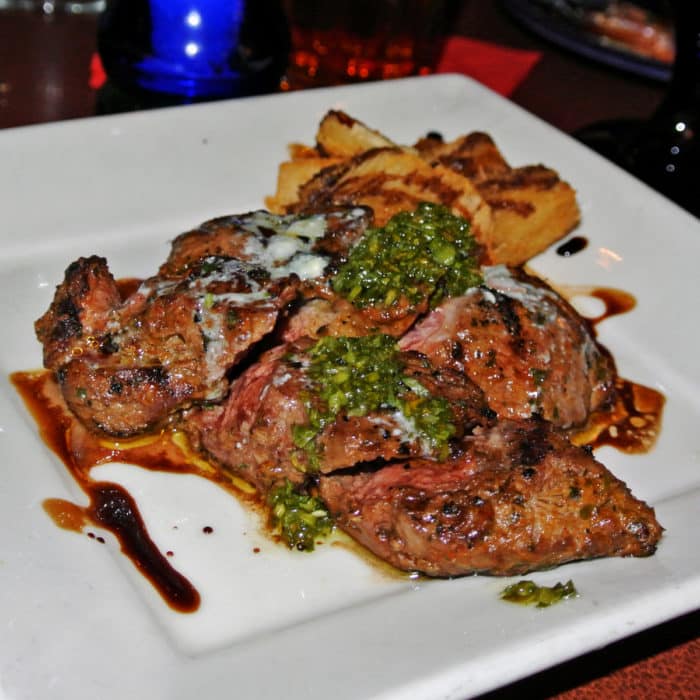 Next was the Beef Taquitos which were filled with shredded flank steak, sautéed onion, chile de árbol, guacamole and crema. These were good, but nothing out of the ordinary. 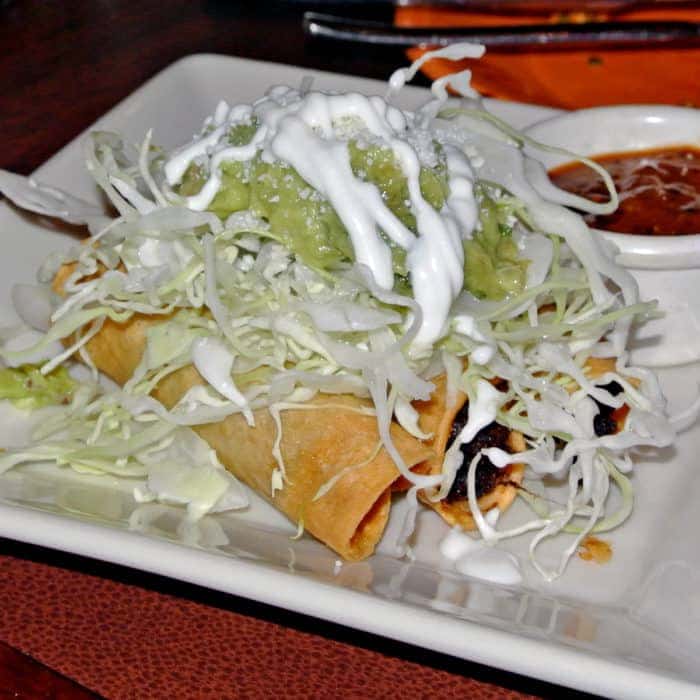 After that though was the Beef Short Rib Adobo. This Mexico City style braised beef short rib was smothered in a rich, bold, spicy, Latin adobo sauce along with a red onion-cilantro salad and crispy fried corn arepa disc. The meat was so insanely tender and that sauce was just outstanding. I highly recommend this dish. 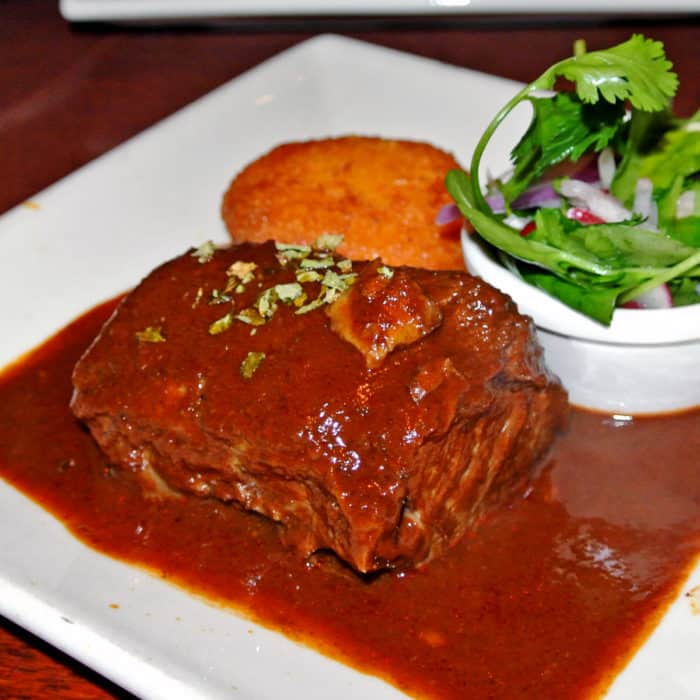 Even more insane than that short rib was the Braised Pork Belly which was a couple slabs of slow-roasted pork doused with an Oloroso sherry glaze. I LOVE pork belly and this version had plenty of that lucious fatty goodness I dream of. The spicy Latin glaze only made it even dreamier.

We also had the Banana Leaf Chicken which was served with poblano chile and tomato & onion sauce. It was served in banana leaf and came topped with steamed rice. I don’t usually love chicken, but this was pretty darn good despite its poultry origins. 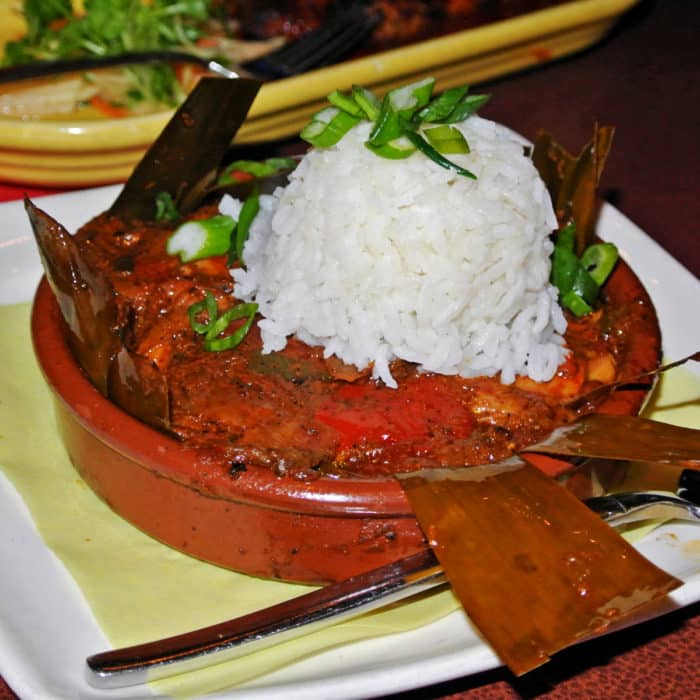 And finally a bit of offal with some Chicken Livers. The portion was pretty massive and they were roasted with Xérès vinegar, sherry wine, garlic, fresh herbs, and currants. It had a pretty bold, iron flavor that I usual like, but found to be overwhelming in this dish. I also wasn’t too fond of the texture of the whole lobes of liver. Pass on this one. 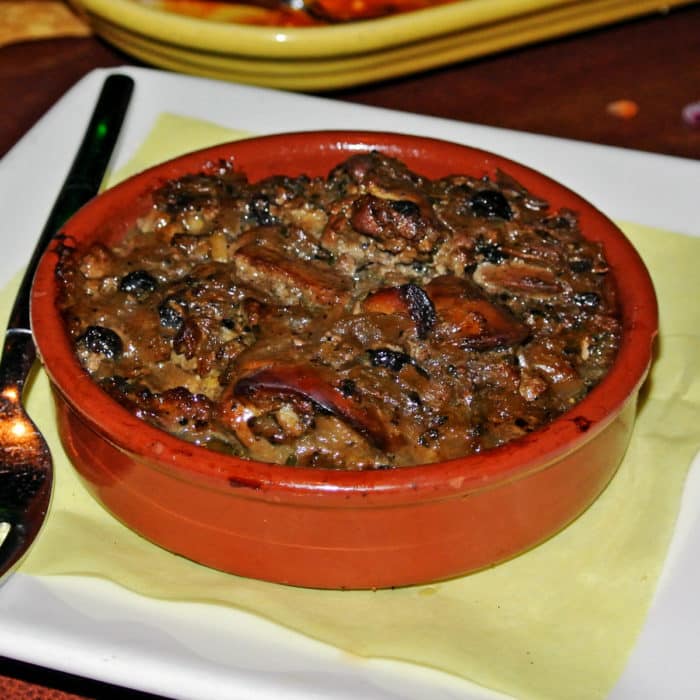 But before we were done we also had some dessert. The Warm Chocolate Soufflé Cake had cinnamon and orange flavors came topped with hazelnuts and was served with coffee ice cream. Yeah, this hot moist chocolate cake went really well with the freezing cold coffee-flavored ice cream, but no surprise there.

So there you have it. A Latin tapas feast fit for kings. Nearly everything we had we loved, though a couple of the dishes weren’t particularly memorable. It’s a touch on the pricey side, but let’s be honest when the Silicon Valley pickings are so slim, I’ll throw a bit more cash into the pile to make sure I have a great meal.

Got another great date night spot in Silicon Valley I should check out? Let me know in the comments below.