*Editor’s Note 11/13/14: This restaurant used to be called Aamanns-Copenhagen NYC but is now simply referred to as The Copenhagen.

*Editor’s Note 10/15/15: I’m sad to report that The Copenhagen has permanently closed.

When you hear Danish food, what comes to mind? Maybe that eponymous jam filled pastry? Maybe you literally have absolutely no clue what Danish people eat. I know I sure didn’t. That is before I checked out the New York outpost of the Scandinavian imported restaurant Aammanns-Copenhagen, known as The Copenhagen.

The Copenhagen is definitely a strange restaurant and its location is equally as odd. You’ll find it at the northwestern-most corner of TriBeCa right where the Holland Tunnel lets out, near the TriBeCa Film Festival cinemas. Despite it’s rather unappealing location, there’s still something intriguing about the place, especially when you spot it from outside. As soon as you see the beautiful hand-painted black typography on the white brick exterior of the building, you’ll know you’re in for something special.

Upon entering the restaurant you’ll immediately face a staircase which will guide your eyes upward towards the high vaulted ceilings. It’s actually a massive space by New York standards with plenty of breathing room between each table allowing you to enjoy looking around the restaurant and seeing the huge bar that spans the entire height of the room, many large art canvases lining the walls, and the other softly candlelit tables. 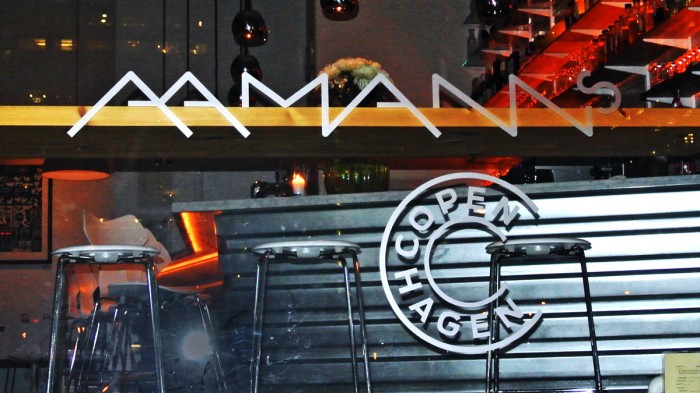 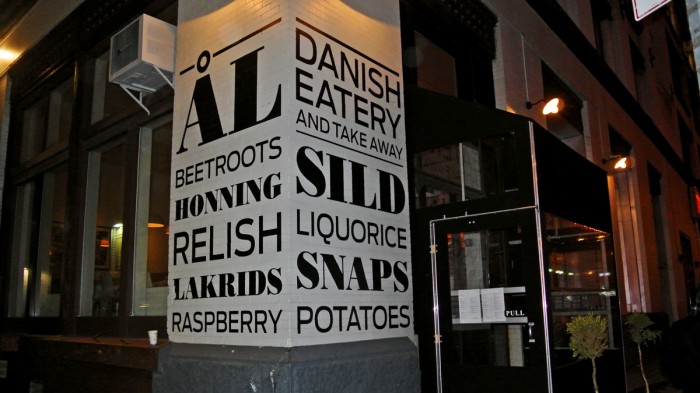 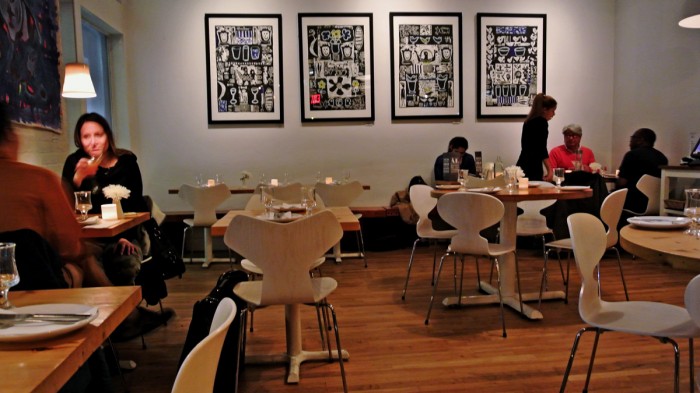 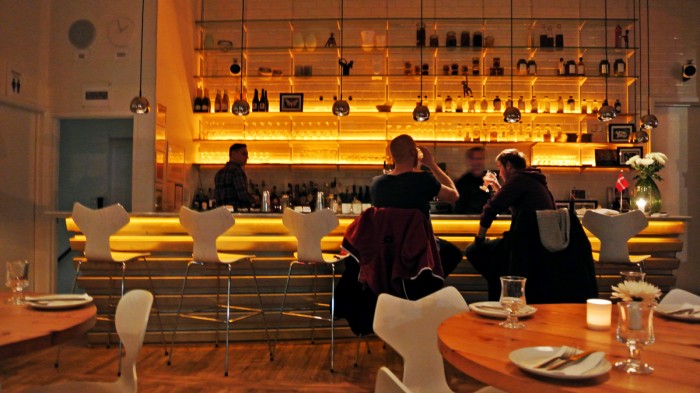 This wasn’t my first time at The Copenhagen, though. I had come for lunch once before right when the restaurant first opened and truly loved the beautiful, meticulously plated open faced sandwiches called smørrebrød that they served midday. You can check out the Salmon and Pork Pate sandwiches I had on that visit on Foodspotting. On this visit, I had instead come with my girlfriend, Amy, for an adventurous dinner date night.

As we frequently do on date nights out, we started the meal with some cocktails. I knew I want to try one of the aquavit based drinks because the spirit is a staple of Scandinavian drinking culture and I had heard that The Copenhagen infuses their own aquavits in-house. If you’re not familiar with aquavit, don’t worry, neither was I. It’s a clear vodka-like distilled liquor made of either grain or potatoes that is usually flavored with spices and herbs, most often with caraway or dill. You can think of it like an herbal vodka.

Anyway, amongst the cocktail menu’s options, I felt compelled to try the Danish Martini which was made with beet aquavit, citrus, and basil. These sound like strange flavors for an alcoholic beverage, right? Well, it really was totally bizarre and had an icy, alcoholic, borscht-like quality to it. But, I kind of loved it.

Aquavit is only 40% by volume so it’s not a strong drink, but like usual, I’ve found myself drawn to really unusual flavor profiles and combinations. Amy actually hated my drink though, and I can understand how some people might feel that way about a drink like this. She did, however, love her own drink, the Danish Sidecar so there are definitely less out-there drink options to choose from. 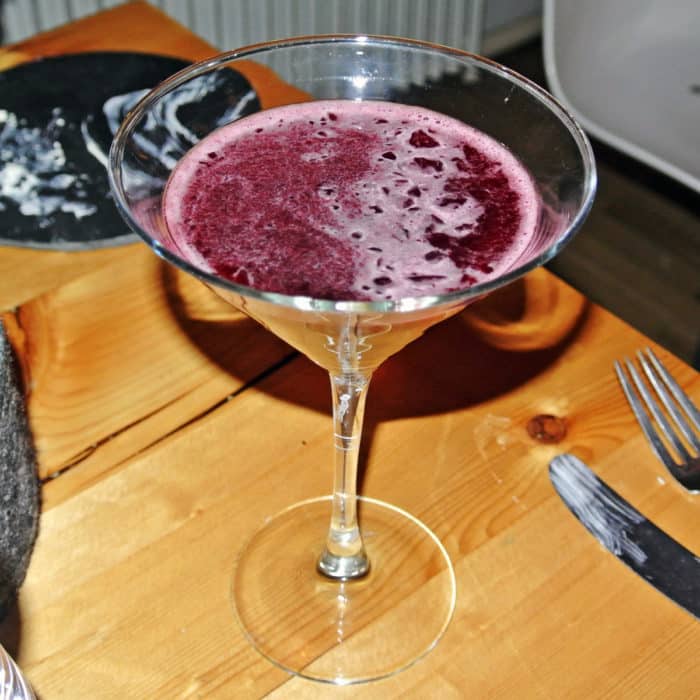 Before any of the courses we had ordered came, a heaping basket of light and dark colored rolls and a slate topped with two large dollops of spread arrived. I usually wouldn’t bother commenting on bread and butter, but The Copenhagen bakes all of their bread in house and that dark roll was so awesomely dense, moist, doughy, and amazing. It was definitely great on its own, but after applying a generous smear of that funky, smoked cheese spread I was nearly brought to tears of jou. It was so incredibly unctuous and unique. I seriously loved that stuff. 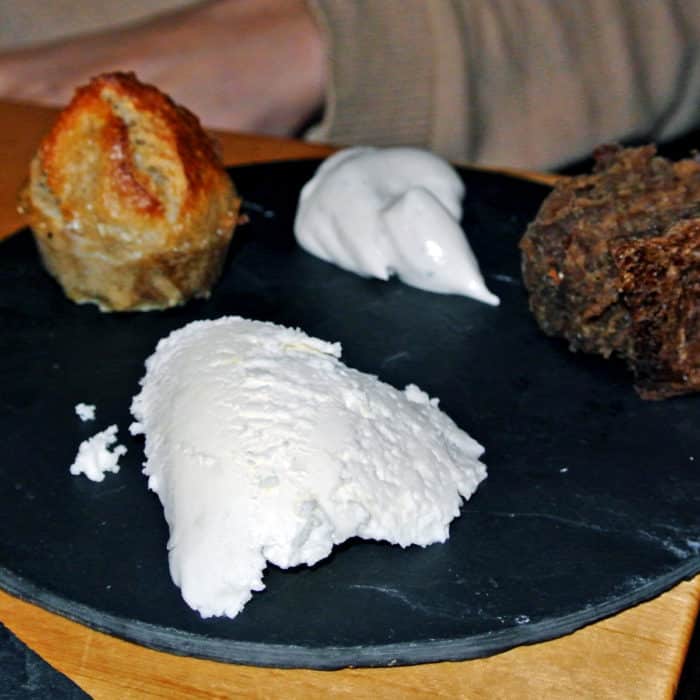 So, you know how I was telling you all this was going to be a really strange meal? Well, I don’t think I’ve yet mentioned their love for bizarre ingredients and treatments like utilizing ash made from burnt hay in a dish. The name of the first dish we ate was Bacon & Hay.

In it, tall, rectangular, glowing-red, ash-dusted pork hunks sat amongst hemispheres of celeriac puree, pickled apple slices, and a yellow egg yolk just begging to be popped. And that’s exactly what we did. We popped the golden orb then cut into the lusciously tender, moist, flavorful bacon slab and smeared it through creamy puree and runny yolk along with a crisp slice of sourish pickled apple. Each bite bursted with bold flavors and textures that we savored until the entire slate platter was completely swiped clean. 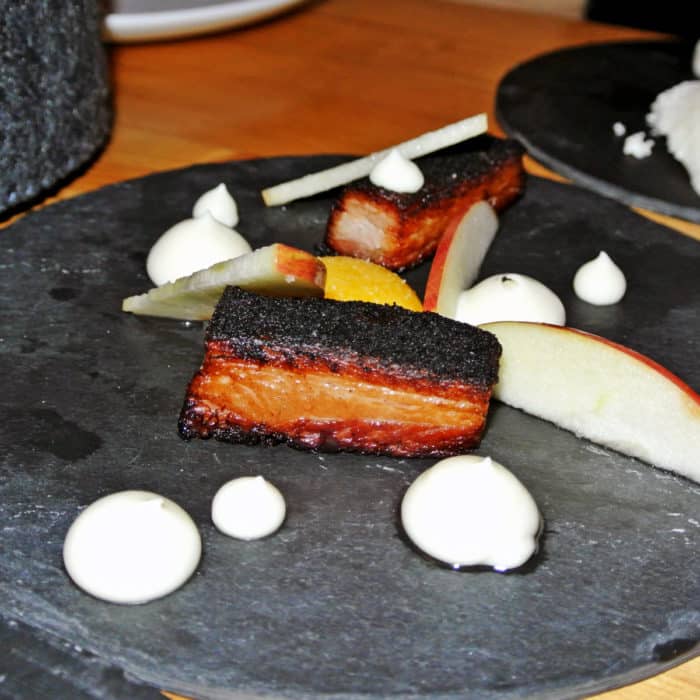 Since I’m a big proponent of Beef Tartare in all of its many incarnations, I knew I had to try the one at The Copenhagen. In their version, the fresh, plump, red, heaping pile of raw beef came topped with individual Brussels sprout leaves along with crispy deep fried capers and a brightly flavored and deeply smokey mayonnaise sauce. This was another impeccably plated dish with amazing flavors and textural combinations. 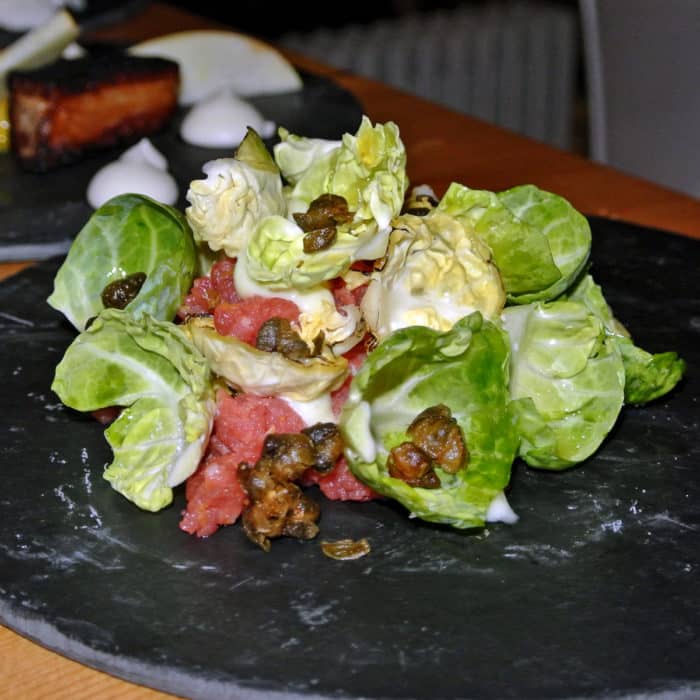 Next, we arrived at the entree part of our meal. For one of our mains, I selected the Seared Fluke. Beneath a pile of roasted shaved fennel was a large, perfectly cooked piece of flaky white fluke. It was incredibly moist and tender and had a beautifully crispy, golden surface crust.

The sauce was quite unusual, but we both couldn’t get enough of it. It tasted kind of like browned butter, but also apparently somehow had mussels in it. Additionally, there was a thick dark green puree on the plate that tasted exactly like grass. In fact, I think it probably was wheatgrass actually. There go those crazy Danes again with their strange ingredients. 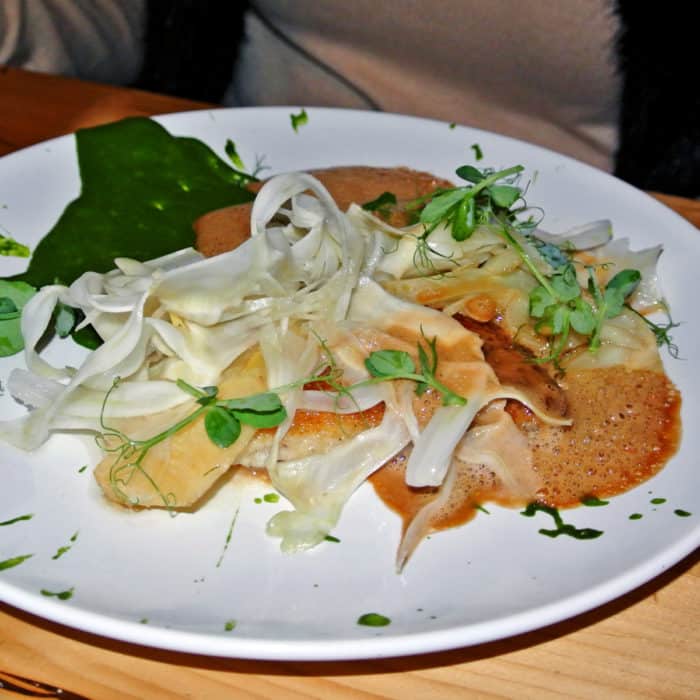 For our other main course, Amy chose the Roasted Cauliflower. This isn’t necessarily the first thing I would think to chose on their menu, but I’ve got to hand it to them, this was one of the most impressive preparations and presentations of cauliflower that I’ve ever come across.

The base of the dish was formed by a massive, thick-cut piece of cauliflower that had been pan-roasted whole like a cauliflower steak. Laid over top were razor-thin mandolin-cut slivers of more cauliflower along with almonds, watercress, and a browned butter sauce. This sauce seriously made the dish with its rich and creamy flavor which successfully tied all of the elements together. Once again, we polished our plate. 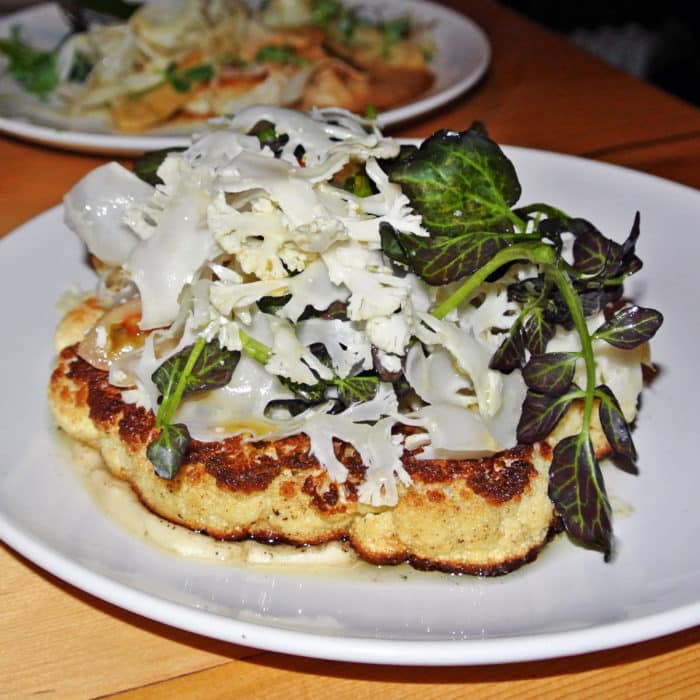 Last, but not least, we arrived at dessert. We selected a dish called Danish S’mores which was probably the most interesting riff on the revered campfire classic I’ve ever had. Arriving on a jumbo-sized, pristine white plate was a large smear of melty milk chocolate and a freaky-looking pinecone-hedgehog-like pastry.

After diving into it, we learned that a crispy, crumbly graham cracker cookie base was topped with a crunchy coffee ground-studded ice cream that encased a fudgey, chocolatey core. The exterior was made of hand-piped marshmallow spikes – browned with a torch. This was certainly the most complex, forward-thinking, crazy looking s’mores I’ve ever had. It somehow managed to nail all of the flavors and textures you’d normally expect with the awesome, bold addition of coffee grounds in the mix. 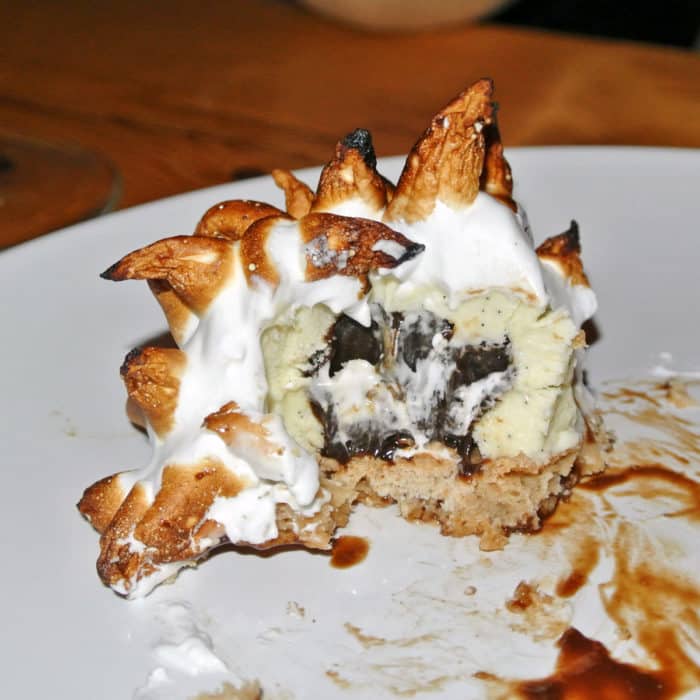 So, there you have it. For going to a restaurant having no clue about the nationality’s cuisine, I’d say we did pretty well. Every single dish was beautifully plated and had complex and interesting flavors and textural profiles. If you’re looking for an exotic dining adventure, look no further than The Copenhagen.

Know of another date night spot with really unusual food that I should check out? Let me know in the comments below.