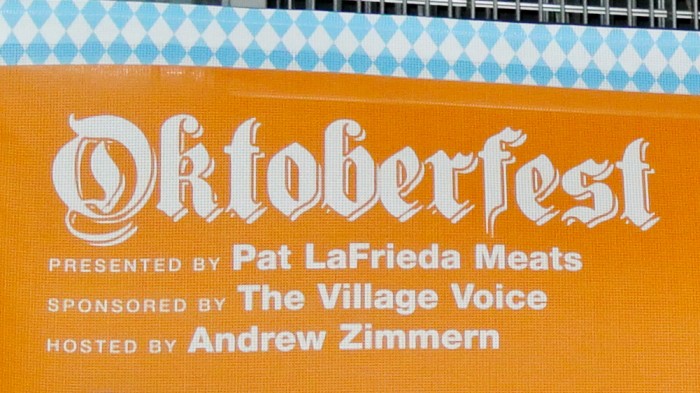 Until we looked at the event details the day of, we didn’t even realize that this event was slated to take place in Queens. We didn’t know we were gonna be trekking far, but as you may know, I recently learned it’s pretty easy to get to key points in Queens from my apartment.

This event takes place at a beer garden right on the cusp of Astoria and Long Island City called Studio Square. Before the event, I had never heard of this venue, but I’m glad I know about it now. It’s quite a large complex with an awesome outdoor patio, perfect for sitting around in the sun taking down beers with friends. They also appear to host music concerts in the beer garden from time to time. On the stage where I imagine the bands usually play, during this event, a really fun polka band is playing all sorts of great polka-version cover songs. 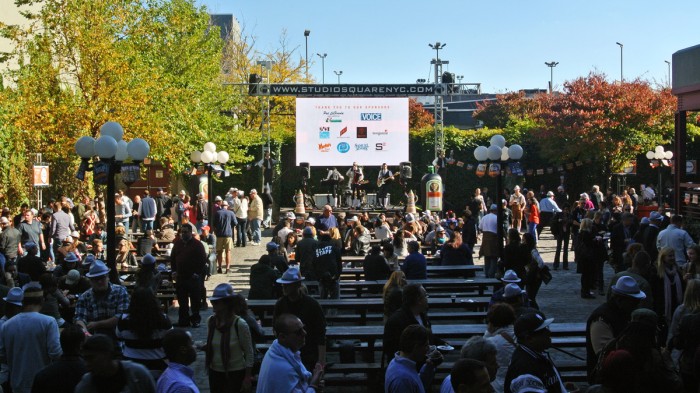 As soon as we enter the premises, we are introduced to the event’s alcohol sponsors, which we dive right into. This is Oktoberfest after all. There are ice cold Jägermeister taps as well as reps pushing a brand new Jägermeister Spice variety. I’ll admit, at first I was skeptical, but it’s actually a really great liquor that tastes great drunk straight. It tastes very wintery with flavors like cinnamon and vanilla and doesn’t have any of that medicinal quality that everyone remembers about Jäger from college.

We also enjoyed the many Sam Adams varieties, but particularly took to the Cherry Wheat which is fruity, but not overly so and the Chocolate Bock which somehow tastes like Smokey Beef Brisket, but in a really good way. There’s also plenty of red wine, white wine, and champagne to go around as well as a honey liqueur that I’d never heard of before called Bärenjäger that I will definitely be adding to my home bar immediately. I know this sounds like a lot of boozing, but come on, this is Oktoberfest, right? 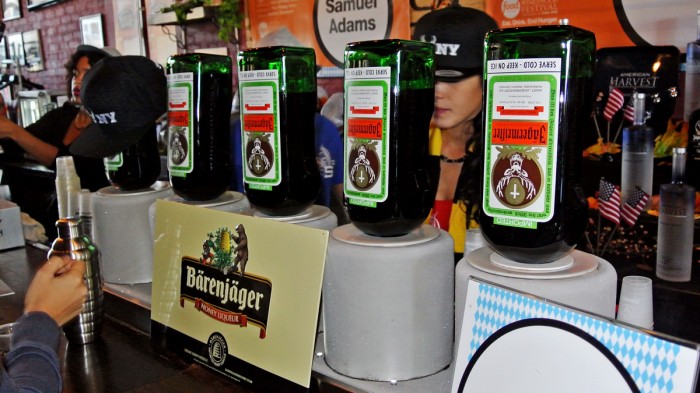 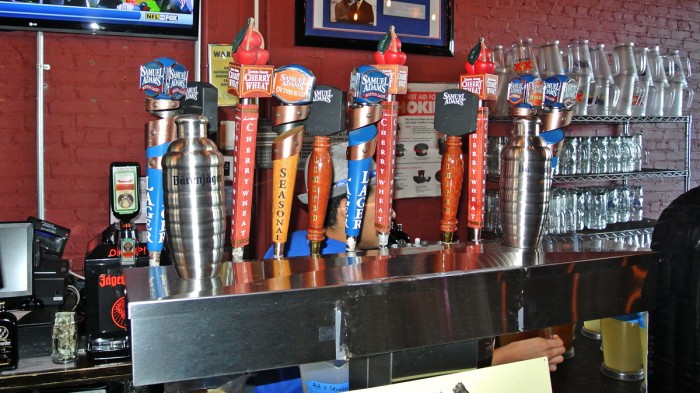 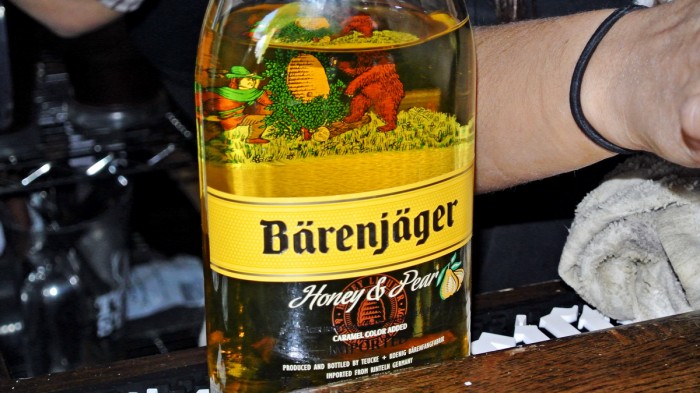 For our first bite at the event, we stop at a table hosted by Bronwyn, a Somerville Massachusetts based German restaurant that made the trip all the way out here. They’re serving a dish called Giant Bretzeln u. Obatzda which translates to ‘Giant Pretzel with Bavarian Cheese Dip.’

Unsurprisingly, this rich, flowing, melty cheese pairs very well with the dense, yet fluffy pretzel bread along with the brightness from the pickled cabbage. This is a great sign of things to come and we haven’t even gotten into the meats yet! 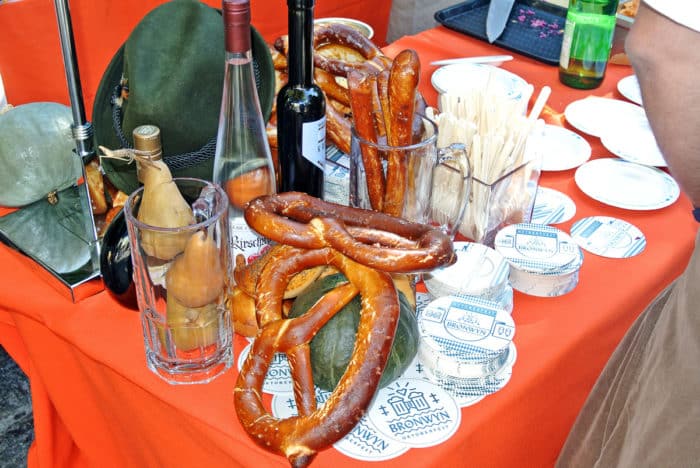 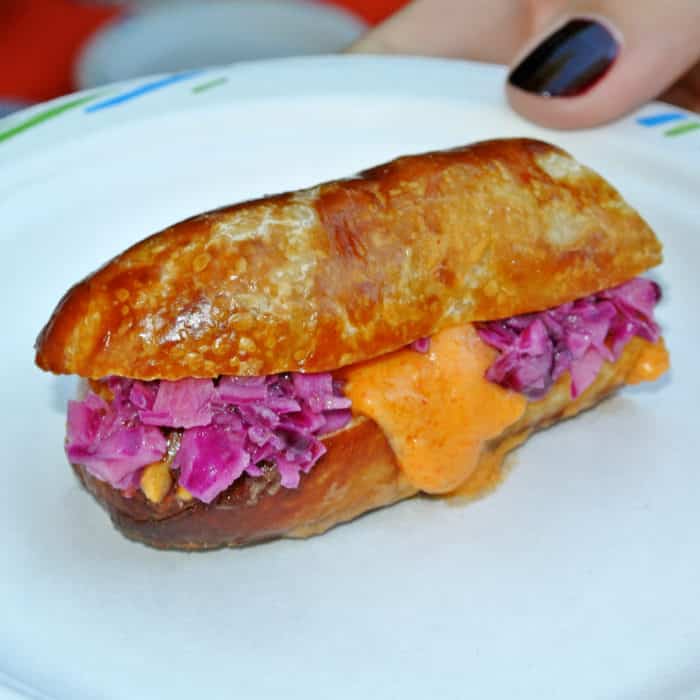 Giant Bretzeln u. Obatzda from Bronwyn

For the next stop, we hit the table hosted by the Austrian restaurant Edi & The Wolf. I’ve been meaning to head over to their Alphabet City location for a long time, but just haven’t gotten around to it.

This is one of those dishes that showed promise, but I think faltered in this setting. The dish is called a Crispy Potato, Cheese, and Bacon Beignets with Apple Sauerkraut & Pumpkinseed Pesto, but I found the beignets lacking in crispiness and the filling lukewarm, verging on cold. I’m definitely into this Pumpkinseed Pesto and this this dish could have been much better if fried fresh, but it just didn’t do much for me here. 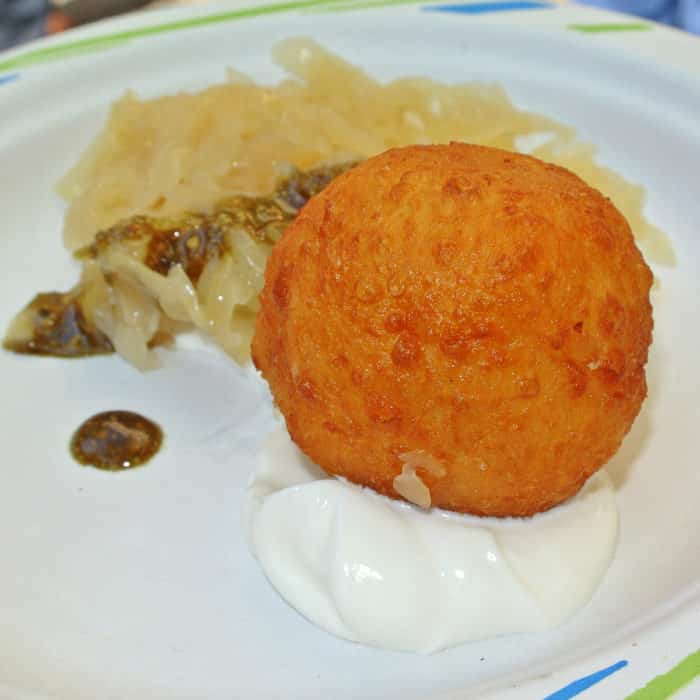 Once again, I find myself eating offal as I laugh watching girls around me cringe at the thought of eating braised pig tails. I made sure to pick a particularly meaty tail so that there would be enough meaty, fatty, cartilaginous bits to suck off of the bone. It’s very tender with a nice vinegary mustard flavor shining through. The plate gets a nice textural contrast from the crunchy crackling pork skin and crisp cabbage. 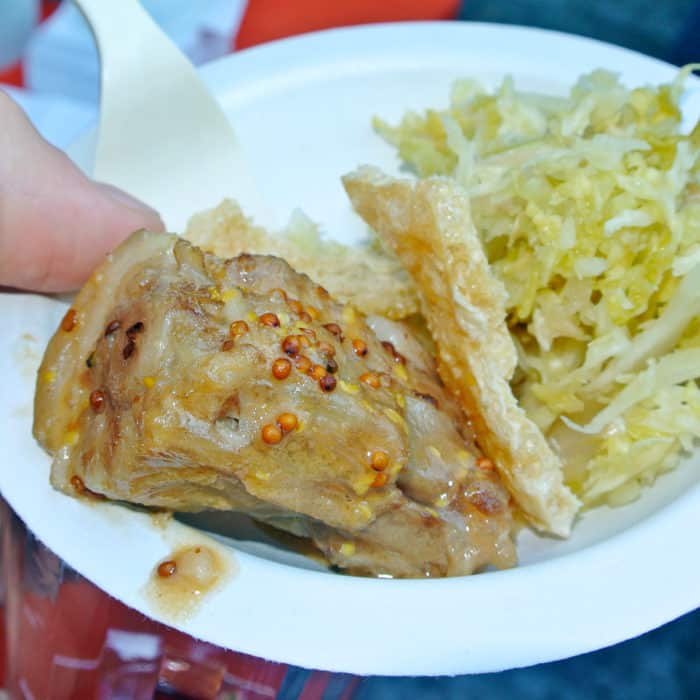 We then head over to the DBGB table, which I’m pretty excited about since I’ve been on a real sausage kick lately and I’ve read that Daniel Boulud‘s hot dog is one of the best in NYC. 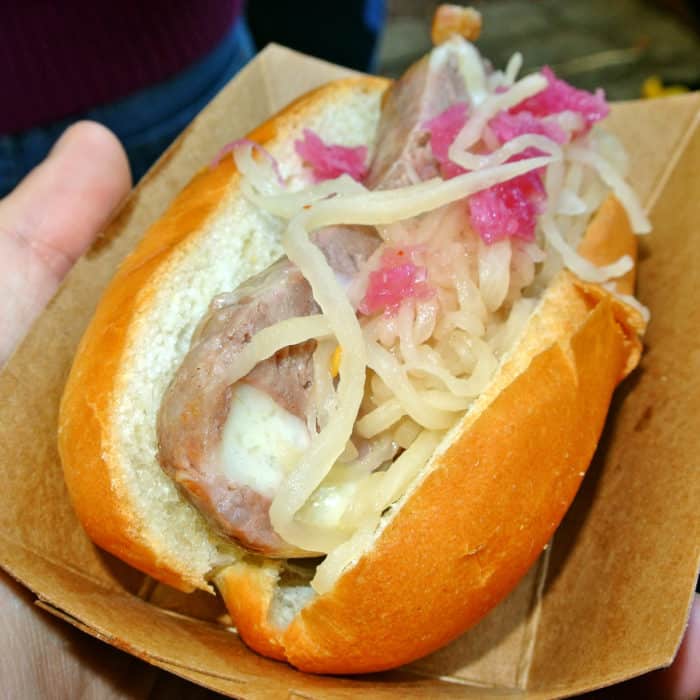 Our next stop is the built-in window at the beer garden bar where the venue’s kitchen is getting in on the Oktoberfest action. I honestly didn’t expect much from this stall, solely due to the fact that it’s just the venue’s kitchen, but boy was I wrong. This is hands down the best thing I ate all day.

They’re serving up a Grilled Bratwurst Patty with Sauerkraut and Brown Mustard on a Martin’s Potato Roll. Absolute perfection in it’s simplicity. The large disc-shaped bratwurst patty spends enough time on the flat-top grill to get a really nice sear and char and the simple toppings add just the right amount more to the already extraordinarily juicy and flavorful sausage patty. I really can’t believe how juicy this patty is! So juicy and extremely flavorful! 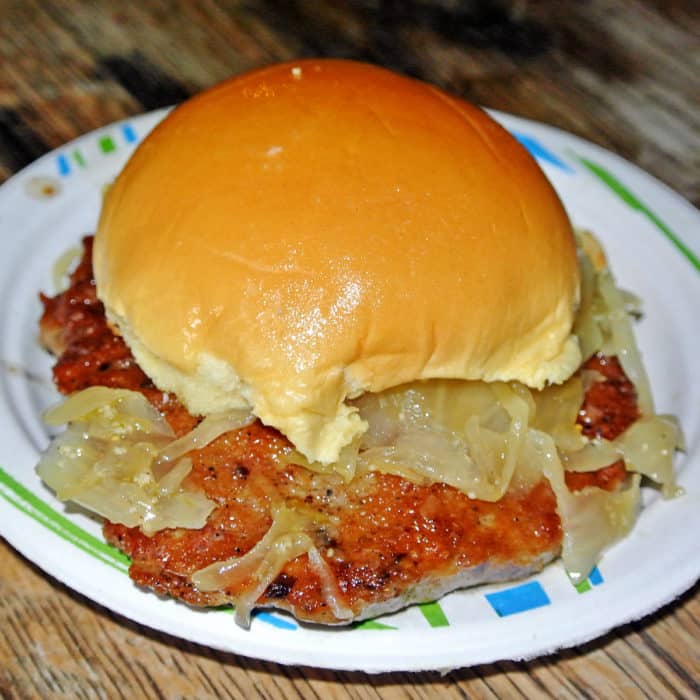 We then head back down to the main part of the venue where there is a long line snaking it’s way over to the Ovelia Psistaria table. This is a local, Astoria Queens Greek restaurant that in my opinion feels a little out of place at an Oktoberfest event, but I’ll let it slide.

After patiently waiting in line while putting back some more red wine, we eventually make our way to the front and are each handed a plate of Olive Brine Pork served with Multi Grain Potato Dumpling with Cabbage and Sweet Apple-Pear Chutney. I can’t say I loved either the pork chop or the deep fried multigrain disc too much, but I definitely did love the Apple-Pear Chutney. That totally made the dish worth eating. 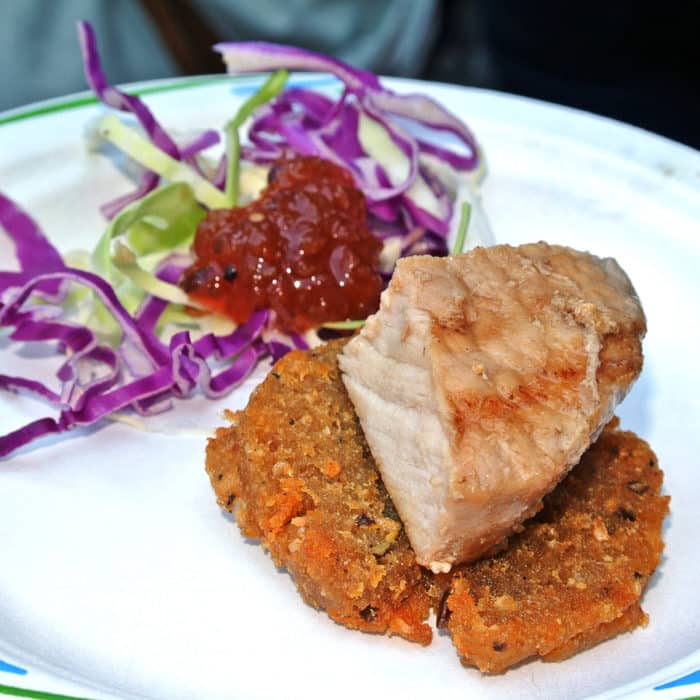 Right after that came the only dessert station at the event. This late in the event, the Butter & Scotch table had already run out of one of the two varieties of mini cupcakes, but we still had the opportunity to try the Schwarzbier Chocolate Caramel flavor. It’s quite dense, but still very moist. It has quite a bold chocolate and caramel flavor that I like very much, but you know me, I love savory dishes more than sweet dishes, so my day didn’t end with this dessert. 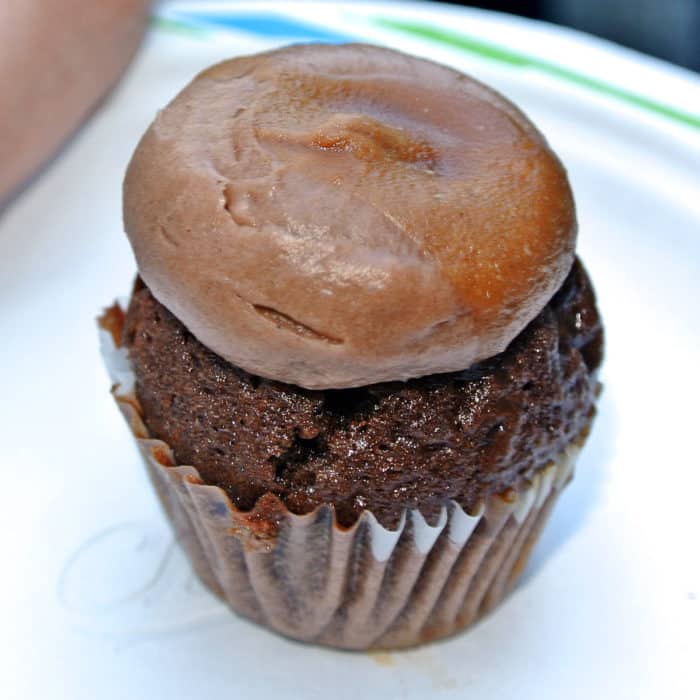 Our final stop is at our host, Andrew Zimmern’s table where he and his team are grilling up his signature sausages that he has had produced in conjunction with the famed butcher, Pat LaFrieda. We start off with one of his AZ Canteen Dogs that are made with Piedmontese Heritage Beef and served with a shake of spicy mint and herbs, Istrian crisp cabbage, roasted veggie mayo, and mustard. The bite from the cabbage and the brightness of the spicy herbs pair really well with the quality, classic-style dog. 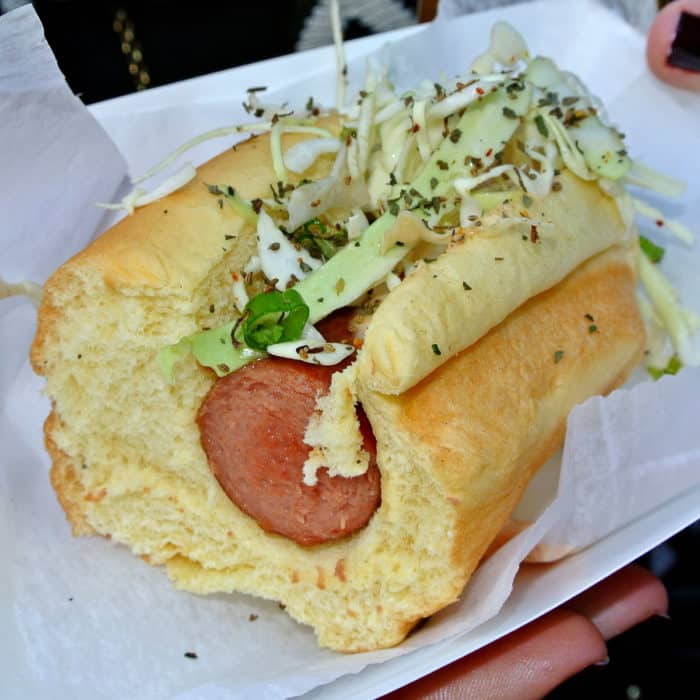 Next up is Zimmern’s signature Cheddar Wurst sausage which is made with pork and topped with oven dried tomatoes, sweet pickles, and hot giardinera. I know this isn’t meant to be a Chicago style dog, but the condiments certainly remind me of one. If I’ve gotta eat vegetables, served on top of a grilled pork sausage will certainly work for me. 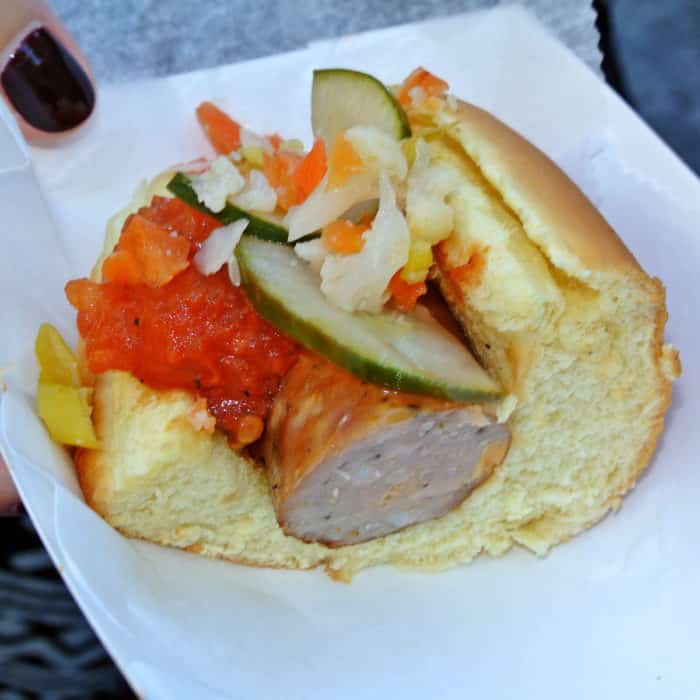 Last, but not least, is the Cabrito Sausage which is made with all-natural goat meat and served with harissa, mint, and almond chermoula. I love this sausage, I really do. There’s a great, bold gaminess to the goat meat with additional accompanying flavor from what I think is fennel seeds inside of the casing. The topping is really awesome too. It’s rich, creamy, and quite interesting with hints of Middle Eastern flavors popping through. I hope I’ll be able to purchase more of these sausages in NYC somewhere at some point. Seriously great stuff here Mr. Zimmern. 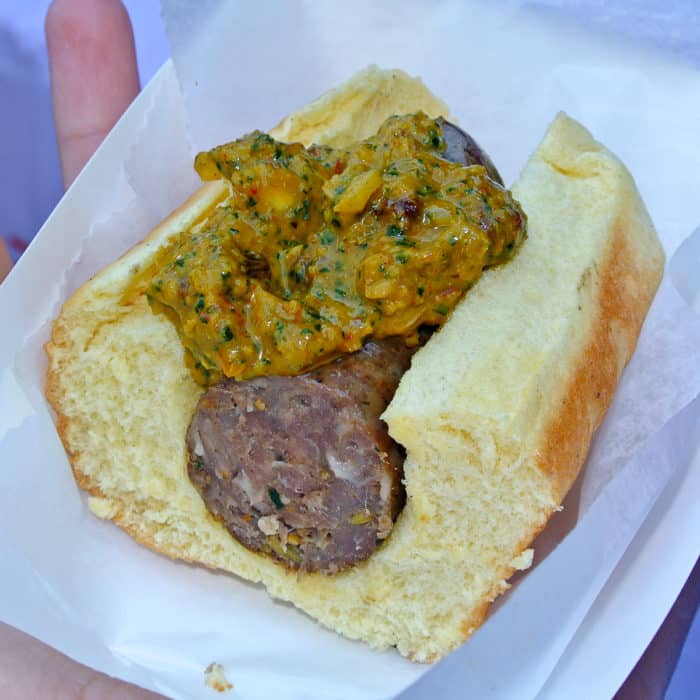 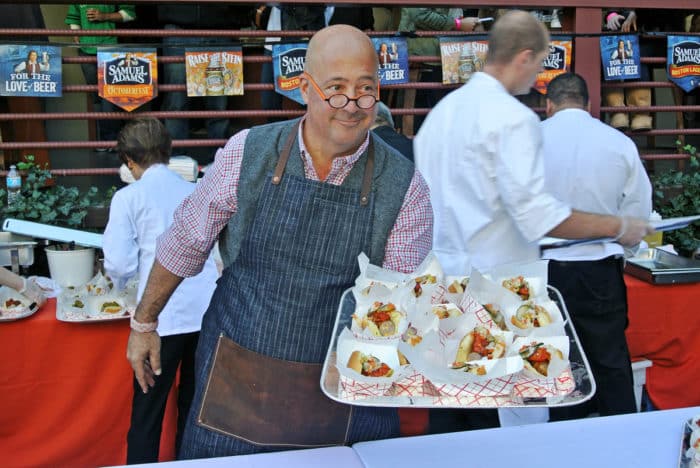 The man. The myth. The legend.

All in all, this is another really well run event. The food is outstanding and the alcohol sponsors pair really well with all of the hearty German specialties. Another trek out Queens well worth it.

Until next time Queens, cluck cluck.