My buddy Evan moved to NYC about a year ago for Med School. Whenever he can get away from his studies long enough for us to get together, he’s always up for an adventure and will indulge my need to experience new cuisines. I’ve known Evan just about for forever, so when I contacted him about going on an adventure, his first reaction was ‘How about Elmhurst?’ Well yes, I had been meaning to head out to Queens and check out a whole variety of ethnic places, so I responded to his request with a list of some ideas I had in the neighborhood. One of the options I sent over, a Tibetan restaurant called Himalayan Yak, piqued his interest so that’s where we decided to meet.

Getting out to Elmhurst (well, maybe Jackson Heights depending who you ask) ended up being a lot easier and faster than I thought it would be. My apartment is only 2 blocks from the West 4th Street F train and surprisingly, the ride only took 22 minutes from W4th to the Jackson Heights – Roosevelt Ave station. After leaving Manhattan, the F stops once at Roosevelt Island, once in Long Island City, then expresses all the way to my destination stop. It’s great to know how easy it’ll be to explore the rest of my Elmhurst to-do list! 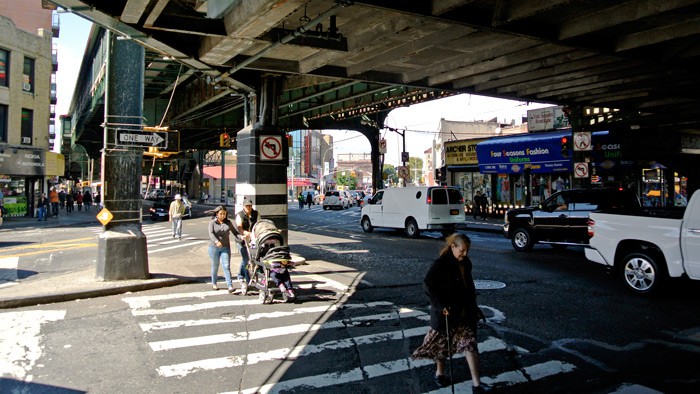 I can’t say I’m particularly experienced with Himalayan food, but I do know just enough to stumble my way through a menu and have a sense of what kind of dishes I should order. For instance, I knew that momos, which are Himalayan dumplings, were a must. Additionally, I knew game meat should be part of the meal along with some curry. After pouring over the menu and consulting Foursquare tips, we decided to order three dishes, focusing on the Tibetan and Nepali specialties. 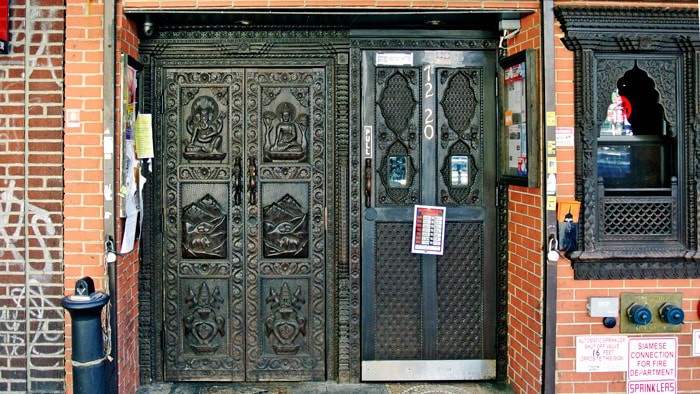 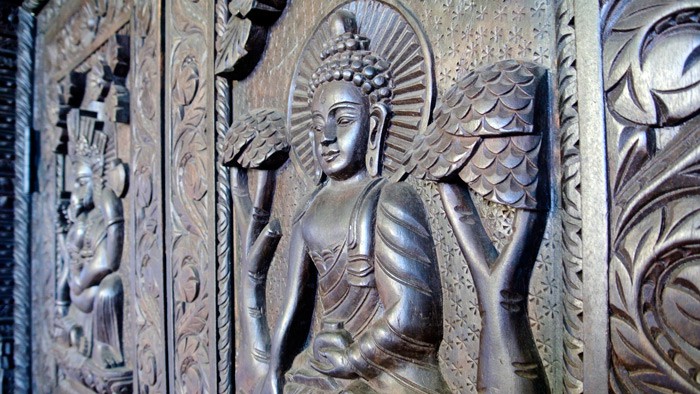 There is quite a vibrant energy to the bustling Elmhurst neighborhood outside. Inside, however, is quite the opposite. You’ll hear serene Tibetan drum music and smell the soothing odor of incense in the air. Diners chat quietly while the polite, attentive servers shuffle around the restaurant with incredible looking platters of food. It’s definitely nicer and more tranquil in here than I expect or than it even needs to be, which is a pleasant surprise. 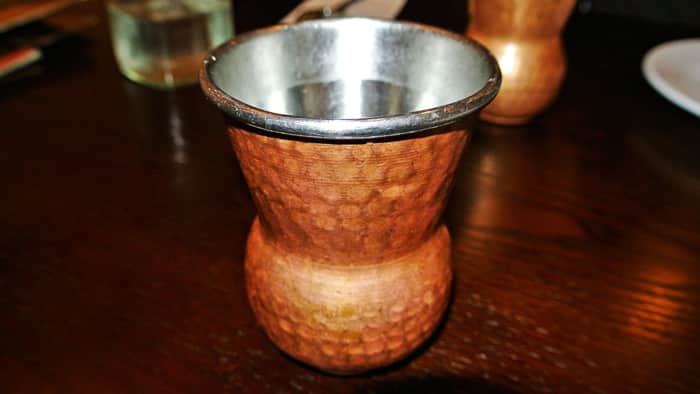 While we wait for our food to arrive, I look over the three sauces offered. There’s definitely some heat in there which I’m sure will pair nicely with all three of the dishes. Beyond the heat though, there is deep, bold, complex flavor in every one. I really wish I could bottle each of these up to take home.

For our first dish, we tried to order momos filled with buffalo, but we quickly learned that they did not have buffalo meat so we settled on beef filled momos instead. We’re given the option of steamed or pan-fried momos, but from my little knowledge of the cuisine I feel like steamed is the more traditional way to have them so that’s the preparation we order.

They have a relatively thick skin with a large beefy nugget of juicy meat inside. There’s quite a bit of liquid inside, so I shove every entire momo in my mouth to consume them in one bite so that I don’t waste any of that juicy flavor. A swipe of all three tables sauces makes these already delicious dumplings even better. 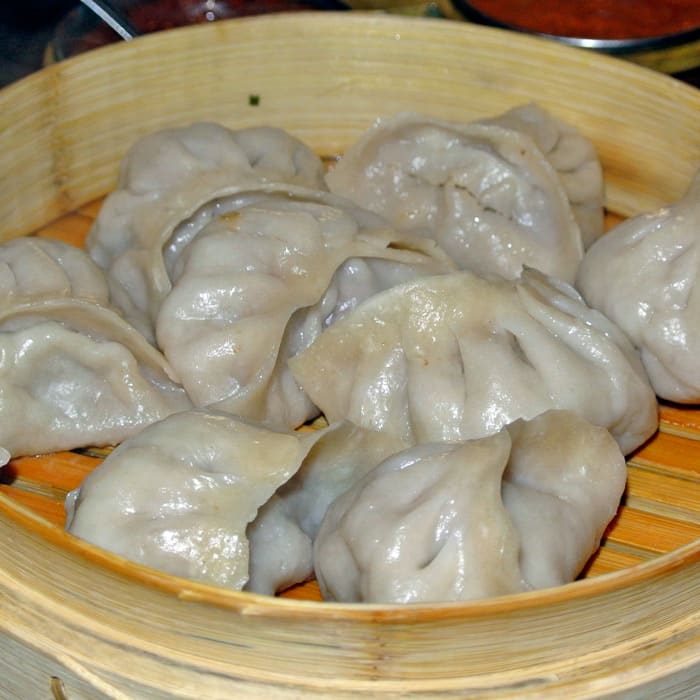 Another dish we quickly honed in on is located in the Nepali specialty section of the menu. The dish is called Khasi Ko Masu and is described as a “popular Nepali style goat curry served with rice.” We both love tender stewed goat meat and curries, so how could we not try this?

Once the dish arrives, we make beds of white rice to spoon the meat-loaded curry over. I am quite surprised by how liquidy this curry is. I’m used to the much denser, thicker curries in other cuisines. It’s also not spicy at all. It’s delicious, don’t get me wrong, just not really what I expected or am used to when it comes to curry. Once again, the sauces prove invaluable.

The third dish we order comes from the Tibetan section of the menu and is called Shapta and is labeled with two chili pepper symbols. We attempt to order it with yak meat since that is the restaurant’s namesake, but we are told that yak meat is not in season, so they don’t have any. Darn, I was really looking forward to giving yak a shot. We instead order the dish with beef and I’ll admit I was a little scared of how spicy this dish might be due to the chili pepper markings. After the dish arrives and I get to try it, I find that it definitely has some heat, but nothing so extreme that I had to be worried about. The dish is in fact really flavorful and is probably our favorite of the meal. The beef itself is on the firm side, but somehow it works and does not detract from the dish at all. I’d trek back out here for this dish alone. 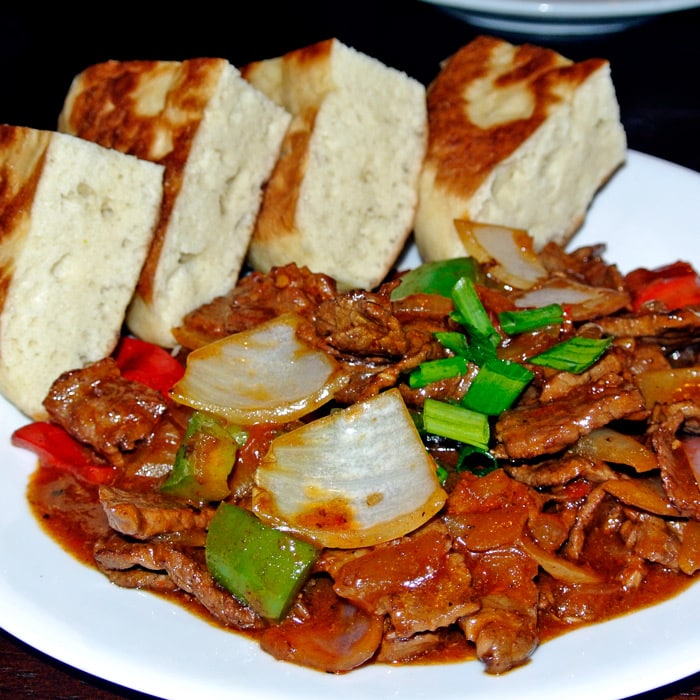 In conclusion, the food is excellent, filling, and reasonably priced and the restaurant itself is much nicer than expected. I think it would make for a great weekend adventure spot or even an exotic, low-key date night. I’d definitely recommend taking a trip out to Elmhurst to experience this deliciously unique food in such a tranquil and serene environment.