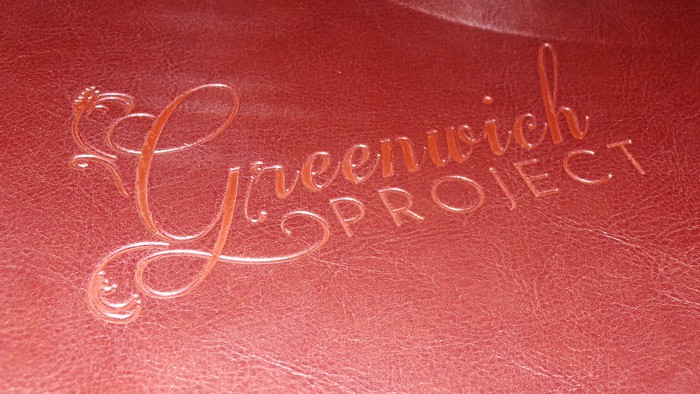 Let’s talk about the weird strip of 8th Street between 6th Ave and Broadway. It’s pretty easy to access but still doesn’t get the same kind of foot traffic as other areas in the Village like St. Marks and MacDougal. It’s been in a constant state of transition over the past few years and is really turning into a formidable restaurant row. There’s a variety of bars, cafes, massage parlors, health food shops, and upscale date-night spots that run the four block span.

I’d also like to introduce you all to a mobile app and web service called Blackboard Eats that regularly provides discounts to a variety of restaurants and sometimes offers special prefix-type deals that do not need to be purchased in advance. You just have to snag the deal for yourself before they run out of offers. On this night, my girlfriend Amy and I head to a fancy place called the Greenwich Project with a Blackboard Eats preset deal in hand to see what it’s all about. 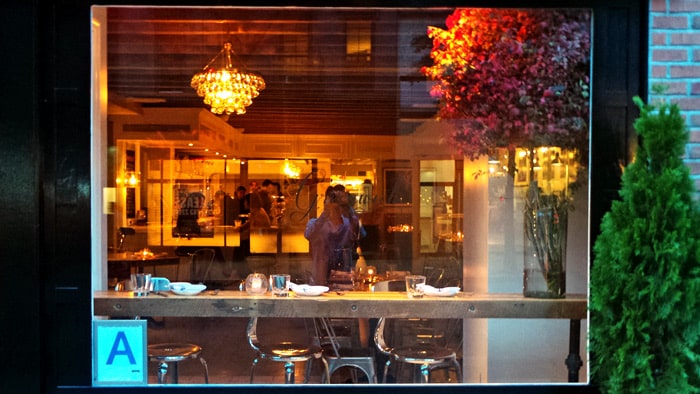 The view from the street + SELFIE

The Greenwich Project is a two-story restaurant with two opposing, yet complementary setups on each floor. The upstairs is a formal, upscale, sit-down restaurant with a prefix menu that also offers a la carte dishes. We are initially seated up there before I inquire about the Blackboard Eats offer I came with. Apparently, to use the Blackboard Eats deal you must be seated downstairs. We decide to switch tables and head down there so that we can utilize the deal.

The downstairs is still quite a nice place to dine, but definitely has more of a bar-restaurant vibe than the fancy schmancy vibe upstairs. Once seated, we are handed a special paper menu to guide us through the Blackboard Eats preset. We are each to choose three small plates and three cocktails for a tasting flight. There are seven small plate options and four cocktail options to choose between. We both make our choices and wait for the flood of plates and glasses to arrive. 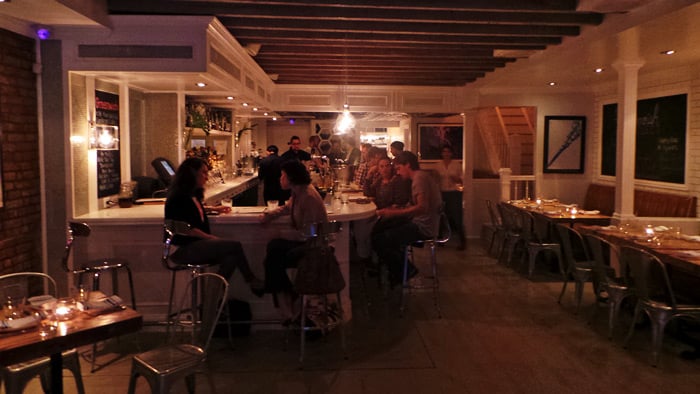 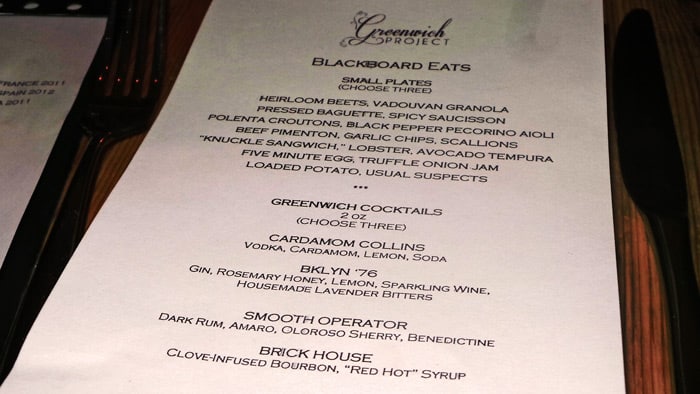 Since we have similar tastes, we both end up choosing the same three cocktails out of the four offered. In the photo below, from front to back is the BKLYN ’76, the Smooth Operator, and the Brick House. Each comes in a 2 oz portion, which in my opinion is a very nice size to sample all of the cocktail varieties. 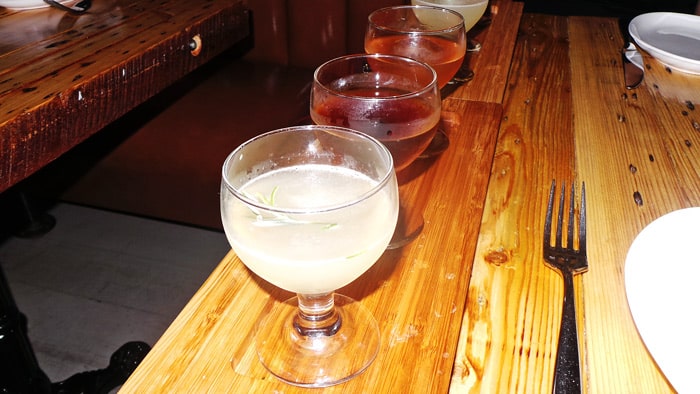 I decide to sample my drinks from back to front, starting the with whiskey based Brick House. It’s made with clove-infused bourbon and “red hot” syrup. It’s a really pleasant drink with a burst of spicy cinnamon flavor that tastes kind of like dropping an atomic fireball into a glass of quality bourbon. Sounds strange, but it actually works really well. 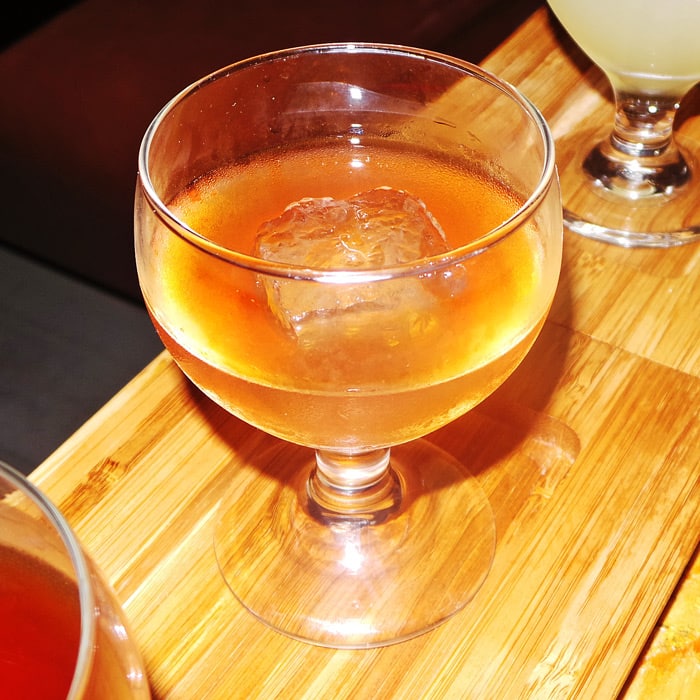 Next up is a bold drink called the Smooth Operator made with dark rum, amaro, oloroso sherry, benedictine, and a sunken cherry. It’s very bold with strong sweet and bitter notes. I’m not a big rum guy, but I did find this drink to be quite good. I even let Amy trade her Smooth Operator with my Brick House since she strongly preferred the other cocktail. 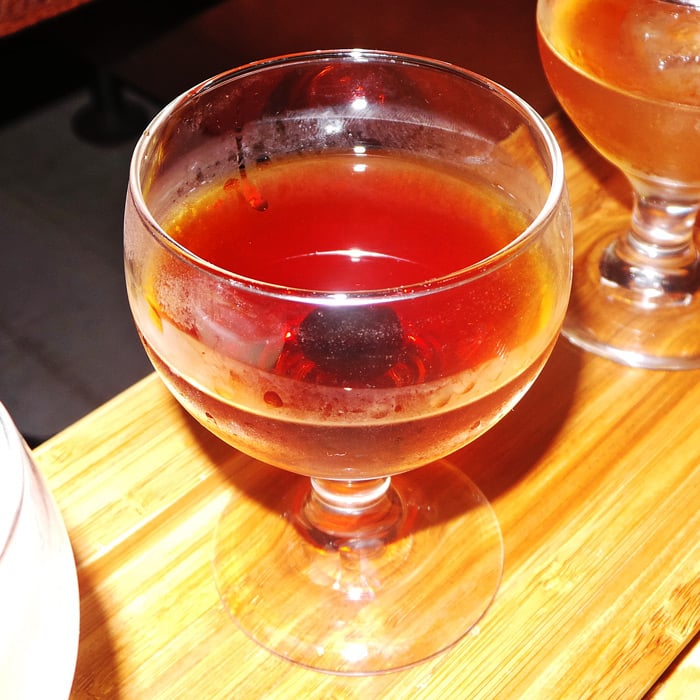 Next up is the BKLYN ’76, which is quite different than the previous two. It’s a very unusual drink with a strong herbal scent and a surprising bubbliness. At first I thought the bubbles were from soda water, but after glancing at the menu again, I realized it was something else. This drink is made with gin, rosemary honey, sparkling wine, and housemade lavender syrup. I guess the sparkling wine and rosemary explain the herbs and bubbles I sensed.

Amy ordered her trio of small plates which includes the pressed spicy saucisson baguette, a mini sandwich with crackling bread bursting with sausage flavor, the five minute egg, which comes breaded, fried, and served on a bed of truffle onion jam, and the polenta croutons which I also ordered and will discuss in a bit. All three dishes are really delicious; the only real misstep occurred when Amy cut into the five minute egg. The pressure of the fork forced the runny yolk to burst out of the side onto the table and booth seat. I’m not sure why or how that happened, but I thought it was pretty funny. 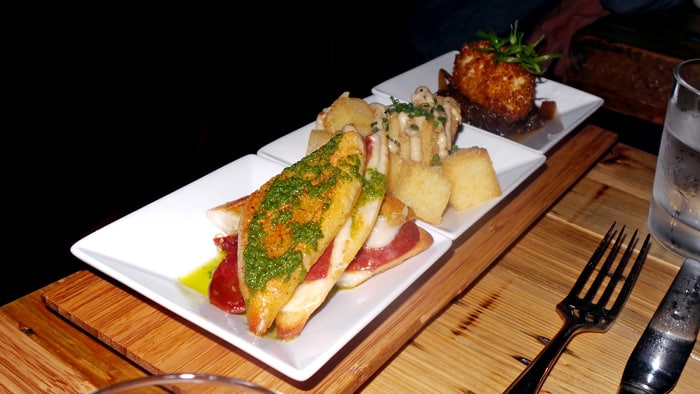 For my trio, I start with the Beef Pimenton dish. These chunks of beef come in a sort of sticky, funky stir-fry preparation with fried slivers of garlic and scallions. This fairly straight forward Asian-influenced dish is executed very well and makes for a great, meat-centric small plate when paired with my other choices. 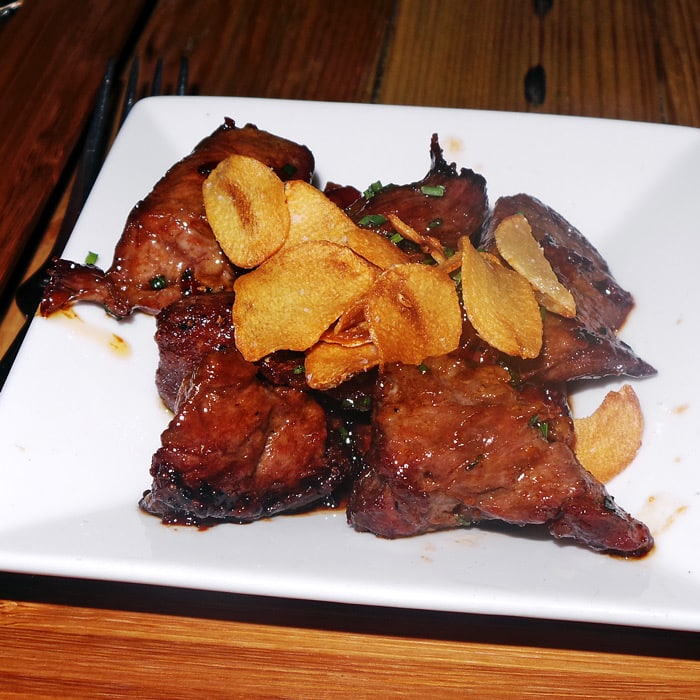 Next up is the Knuckle Sangwich, and no, that’s not a typo. This open faced sandwich comes on a thick, round piece of bread that somehow manages to hold up all of the lobster salad without getting soggy. There is definitely a heavy usage of mayo, which I actually quite like, but I know this might be a problem for some people. You can however still can taste plenty of the delicious lobster despite the mayo. It also comes topped with a tempura battered and fried piece of avocado which is a very nice addition to the dish. 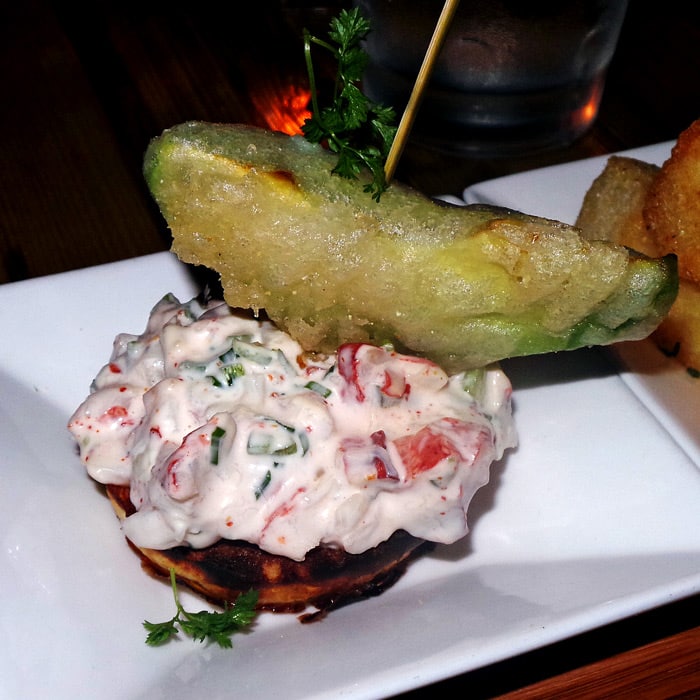 I think my favorite small plate of the night is the Polenta Crouton dish. The texture is truly outstanding. There’s a nice fried crisp on the exterior with such an amazing creaminess inside. It’s so incredibly light and fluffy. I love the way it smushes and yields between my tongue and roof of my mouth so easily. The black pepper pecorino aioli is also awesome. In the words of my girlfriend, “I want to bathe in it.” 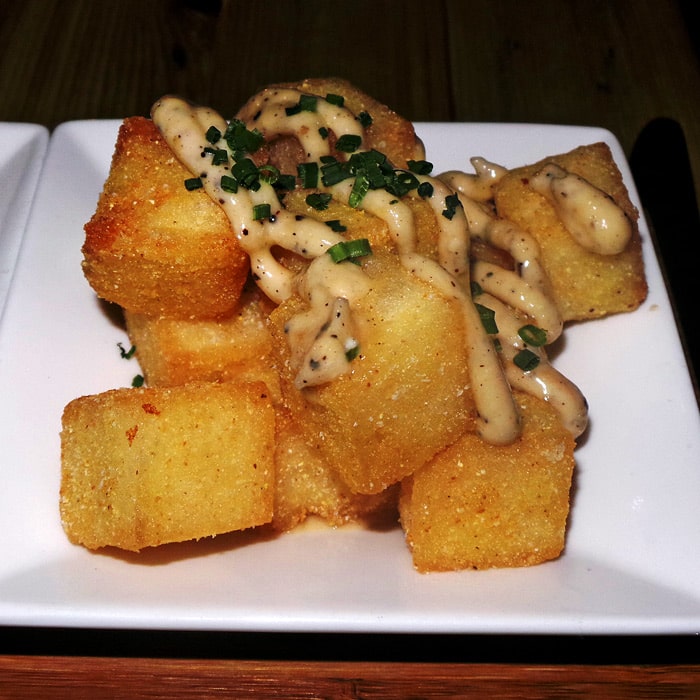 After polishing off our flight of cocktails and digging into our trio of small plates we decide to indulge in one more cocktail each. I’m sure glad I did because after quickly looking over the cocktail menu and honing in on the Oaxaqueño, I found myself in cocktail bliss. Sure it’s one of the more expensive cocktails in town, but I’ll be damned if this isn’t one of the best things I’ve ever tasted. It’s a smoky mescal-based drink with herbal, spicy, and chocolaty notes with an almost milky quality to it. It’s unlike anything I’ve ever had before. I think I’m in love.

In conclusion, even with the Blackboard Eats deal it’s still quite a pricey place to dine, but everything is made incredibly well, especially the cocktails. If it you won’t feel the pain in your wallet, it’s a really sexy place to bring someone and I’m sure you’ll love it.