Break out the confetti and champagne!! It’s a perfect ten! Chef Chris Cosentino knows exactly how to work his way into that soft spot in my heart. All it took was a few of his crazy, funky, zany, inventive, and downright delicious over-the-top meat-filled culinary creations. Yes, that’s right — I’m giving this place my first and only flawless 10/10 review, so buckle up for a long one as I explain why I’m so obsessed.

You may know of Chris from his many stints on food TV, but I’ve found myself uncontrollably drawn to him because he cooks only the kind of food that he wants to eat. With his cooking, there’s no remorse for pushing people’s palettes to the edge of fear. Fear? Yeah, most of his food utilizes all of the delicious miscellaneous organs and obscure cuts of meat that many other chefs won’t even dare to work with that most people don’t ordinarily choose to consume — frequently involving complete nose-to-tail dishes. Fortunately for me, I share his love for well-prepared organ meats.

His first (and now closed) SF restaurant, Incanto, was very highly regarded and brought him a lot of positive attention for his adventurous and skillful use of organ meats. Whether the public was ready to indulge in these sorts of oddities was seemingly no concern for this offal pioneer and I respect that. I like to imagine a young Chris channeling the famous line from Field of Dreams “if you build it, they will come”. And come they did — for twelve whole years until it was time to close that Bernal Heights restaurant in favor of a brand new opportunity to experiment in a more lively part of town.

Now, I never got the chance to dine at Incanto, but I always make a point to stop at Chris’ fast-casual Ferry Building butcher counter, Boccalone, whenever I’m in the area. The shop’s tagline “Tasty Salted Pig Parts” is an accurate summation of their drool-worthy charcuterie and offal-loaded offerings. Literally everything they make is delicious. I’ve never been disappointed by any of the evil genius-level creations (see: outstanding sandwiches, signature spreadable nduja salami, or simply brilliant meat cones). So, safe to say, I was pretty psyched to see what Chris had in store at his new sit-down venture, Cockscomb, over in the easternmost reaches of SoMa.

The perfect opportunity to experience Chris’ new baby presented itself when an adventurous-eating friend asked me to select an awesomely exciting restaurant for her birthday dinner. So, on this particular evening, four of us rode over its bleak block on the outer edge of SoMa. This particular street gets minimal foot traffic, but the restaurant still manages to draw large crowds. The exterior is notably understated — it has a sort of cold, steel facade that feels more like a meatpacking warehouse than a high-end restaurant.

But inside, in stark contrast to the almost frightening (j/k) external experience, we were faced with a big, warm, lofty main dining room that was loud, bustling, and vibrated with a noticeably high-energy. The entire restaurant maintains its edgy, modern-rustic vibe with lots of warm, natural woods and a variety of quirky, unusual wall-hangings. But, the focal point of the room is certainly the gigantic open kitchen where you can watch the chefs hustling their asses off every night. We were lucky enough to actually see Chris getting his hands dirty with the rest of the kitchen staff during our visit. Gotta respect that. SO yeah, that main room looked like a ton of fun, but we were happy to be led upstairs to the quieter, more secluded second-floor back dining room, which allowed our dinner conversation to flow without competing to be heard.

Now, I don’t often talk about waiters, but the service we received was so outstanding that I have to give a shout out. The dude was super attentive, but beyond that, he was obviously so freaking thrilled to describe all of the day’s specials to us. You could just see it in his eyes and hear it in his voice as he excitedly rattled off all of the unique large-format and non-standard offerings. That sort of excitement is just contagious. 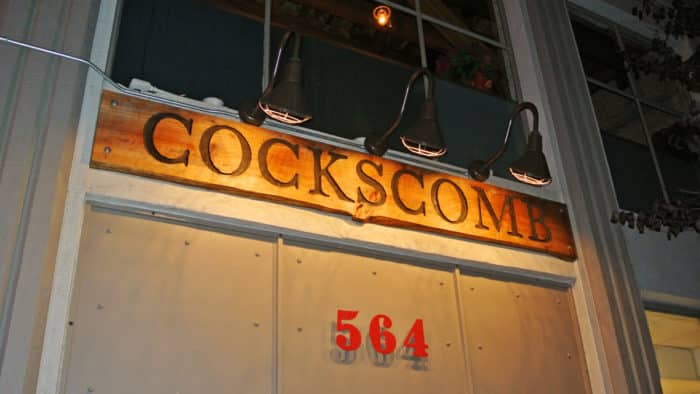 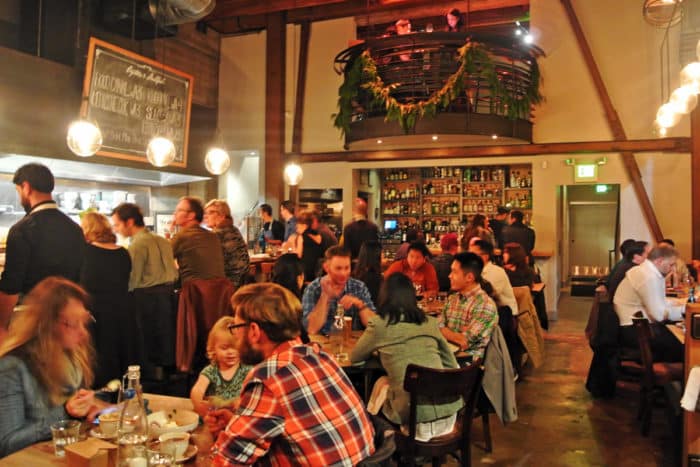 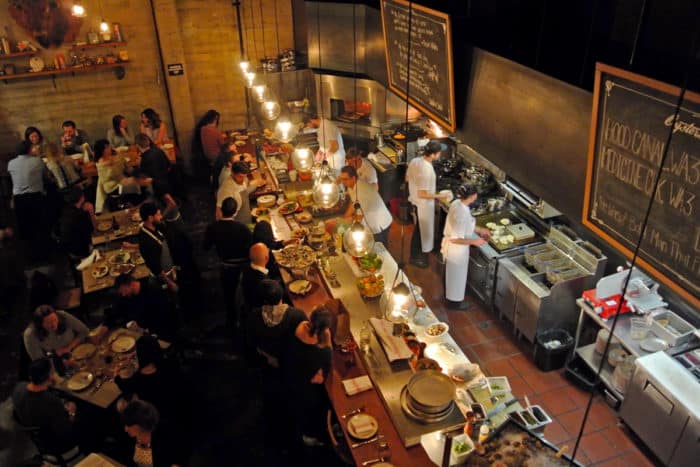 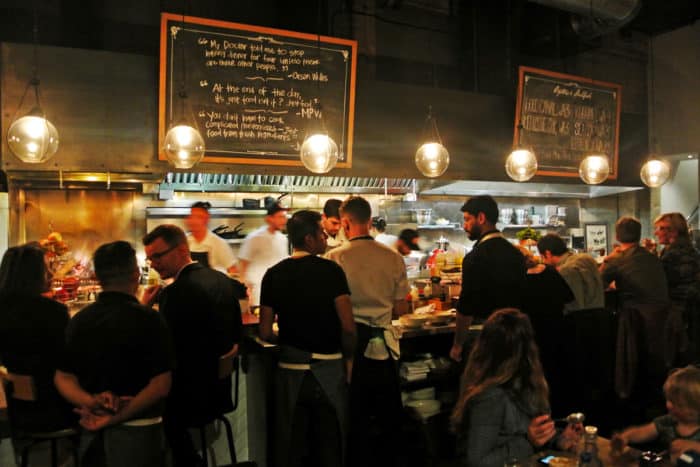 OK, now let’s talk about the meal. Since, all four of us were pretty adventurous eaters, we decided to split a whole bunch of dishes so that we could best experience the vast and exciting diversity available on the menu. We brought some wine, but before digging into that bottle, we each kicked off the meal with a cocktail.

I selected a tequila-based drink called the Fresca Kid, which I thought was very good and went down quite easily. It was made with Patron Silver tequila, Lo-Fi Amaro, grapefruit, and soda water, so the flavor was suggestive of fresca soda with a woodsy, boozy edge. They did a really nice job balancing the strong sweet and sour grapefruit flavor. 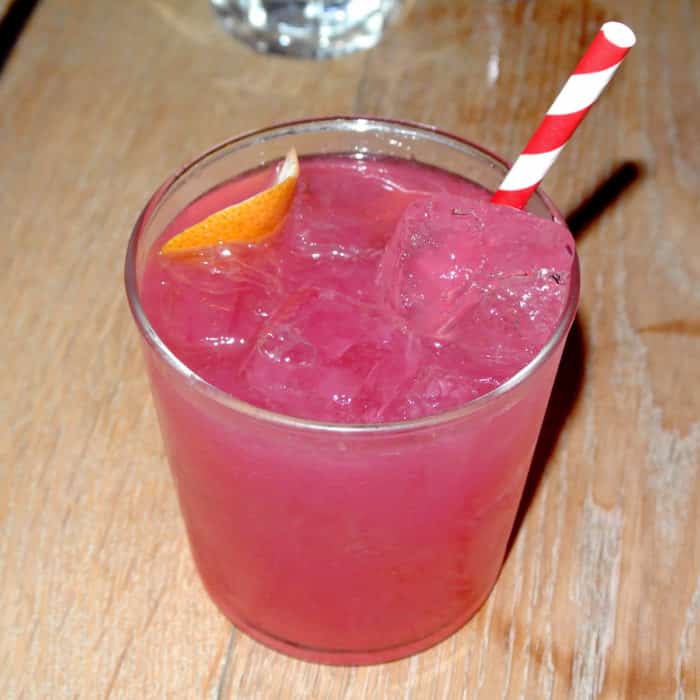 The cocktail Amy selected fit her palette perfectly. The Boothby was made with Cranberry & Douglas Fir bourbon, sweet vermouth, bitters, and sparkling wine. It was very spirit-forward, but also really nicely balanced. The Douglas Fir added such an interesting pine-iness to it. Honestly, I think this drink tasted a lot like Christmas. 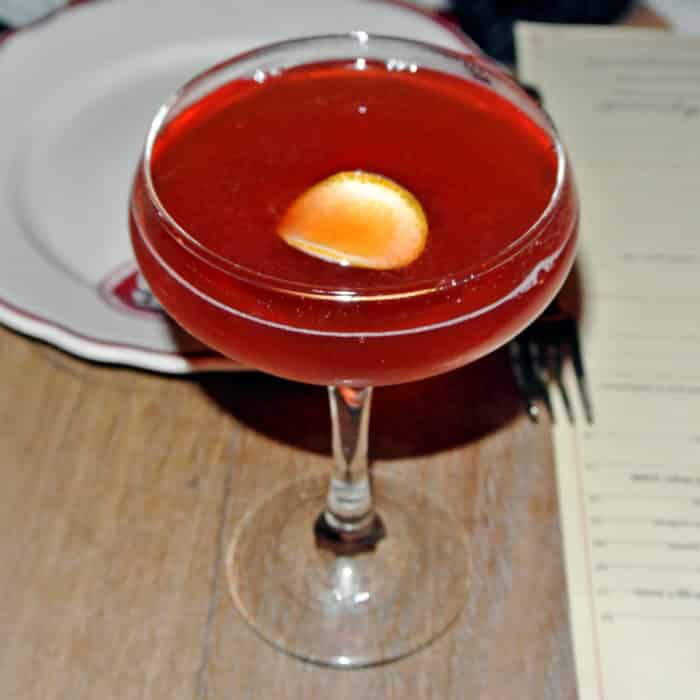 And now for the parade of edible indulgences. We started with their Duck Mousse Bruschetta, which was one of the day’s specials. Our waiter used the word “decadent” like six times when he described the dish. And boy was he right!

The bruschetta involved a big, amazing, thick-cut piece of chewy, sliced rustic bread. On top of that there was an extraordinarily generous schmear of super-rich, creamy, unctuous duck liver mousse. And on top of that, there was a super sweet-and-tart, fresh cranberry jam featuring whole cranberries. And likely just for a bit of color and contrast — sprigs of parsley. This thing… I’m telling you guys, was just ridiculous. It was insanely bold, rich, flavorful, over-the-top, and yes, decadent. This was totally my kind of dish. 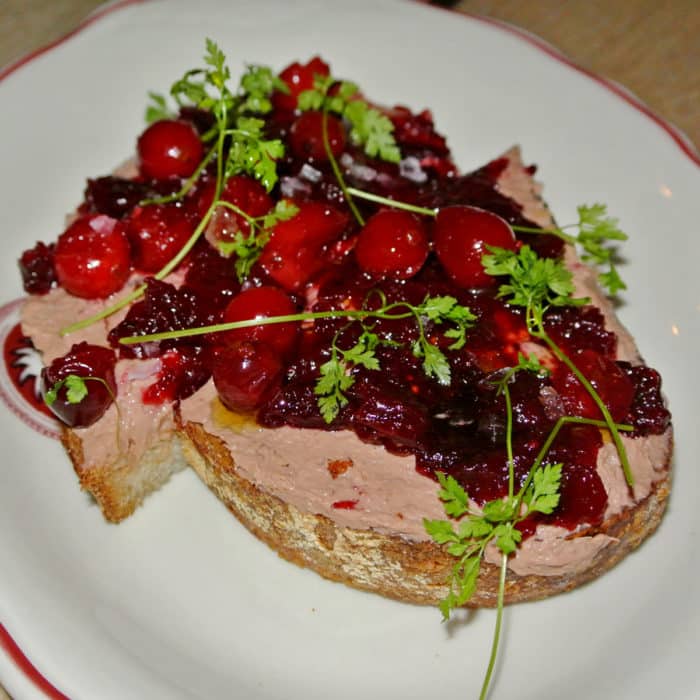 OK, wait for it…. Boom, bitches! Beef Heart Tartare! Oh yes… this tartare was super-freaking fresh, absurdly creamy, and ridiculously tender. It came served with more of that same awesome rustic bread — except this time it was pre-buttered and grilled. And on it, this incredibly silky smooth tartare spread, well, like butta. The tartare had a wonderfully luxurious consistency, and the horseradish cream added just the right amount of bite without overshadowing or detracting from the immaculate raw meat. Get this. 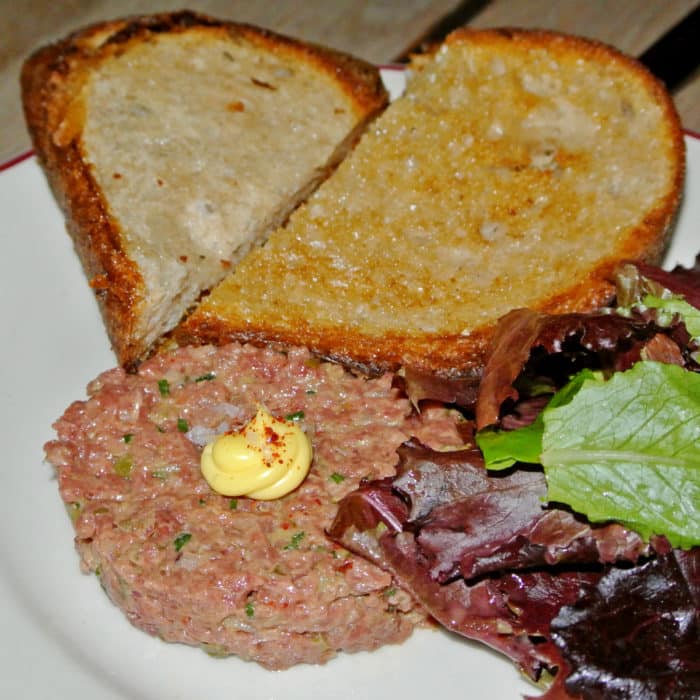 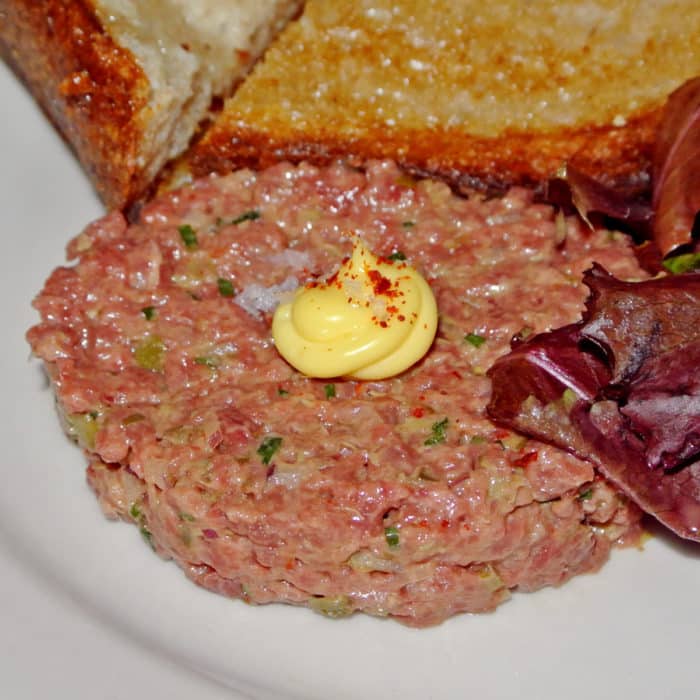 Now, I bet you think you’ve had a great Grilled Cheese, but… oh my god. Oh. My. God. I never want to eat grilled cheese without honey again. The bright, bold, sweetness it added was so unusual and unexpected. Plus, the thing was cooked absolutely perfectly. It was well-buttered, crispy on the outside, and utterly ooey-gooey on the inside. But, that’s just the beginning.

There was a fried duck egg plopped on top — just begging to be popped all over the already insane grilled cheese. Yeah, I popped that yolk. Holy eggporn, Batman. And then there was the most excessive element of all — shaved Oregon white truffle — which pushed it even further over the top. This grilled cheese has set the bar for all other grilled cheeses. 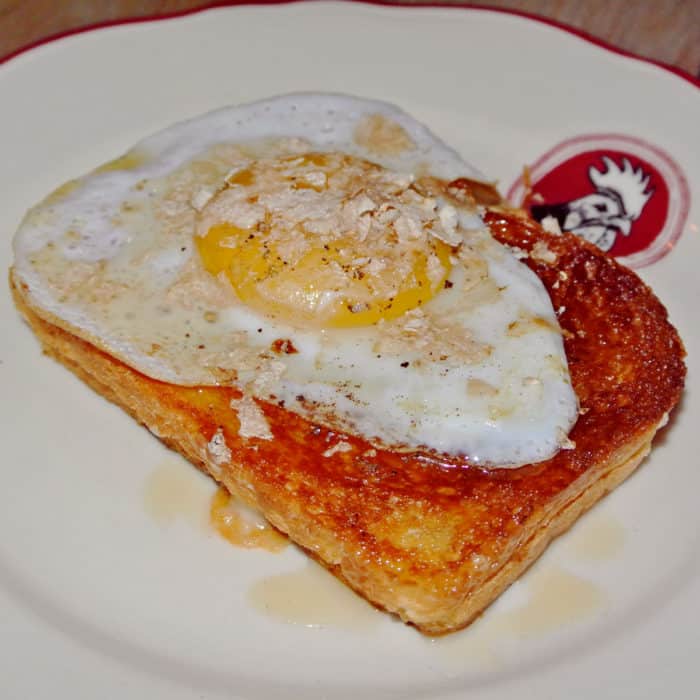 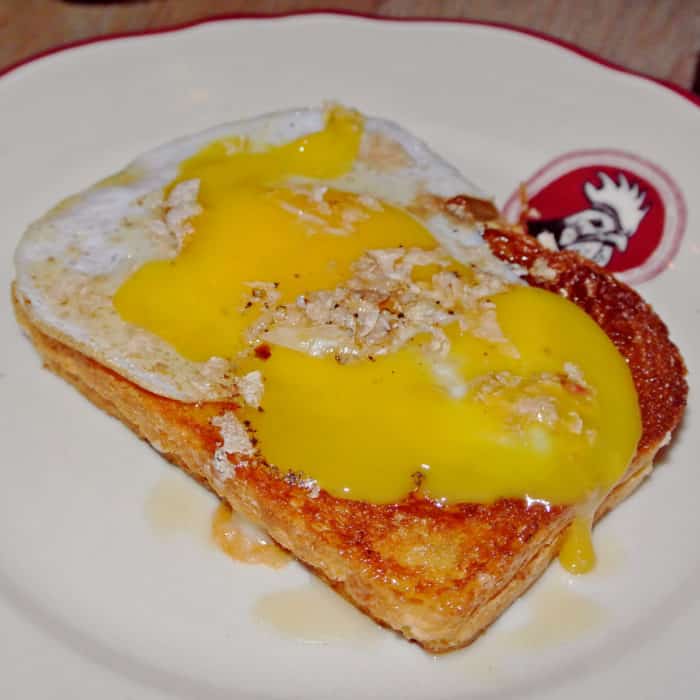 To pair with our shared mains, we decided to get a few veggie-based sides, starting with Duck Fat Cauliflower. These big hunks of cauliflower were pretty crisp, oven-roasted less aggressively than I normally do at home. The spicy, red Thai peppers added a nice, aggressive heat, but I sort of wish the duck fat and mint had made their presence more well-known. It was a nice, totally solid vegetable side dish, but not nearly as adventurous, exciting, or flavorful as most of the other things we ate during the meal. 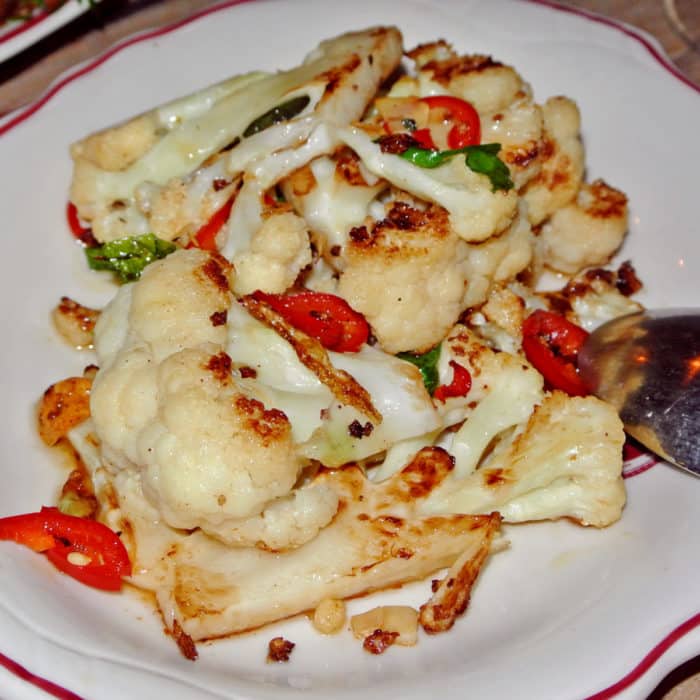 As another veggie side, we went for the Wood Roasted Mushrooms, which I thought were cooked impressively well and were much more interesting than the cauliflower. I really enjoyed the earthy flavors and especially appreciated the tinge of horseradish heat. But, I think the chef’s best decision was the generous use of breadcrumb gremolata for crispy texture. If you like mushrooms, get at this dish. 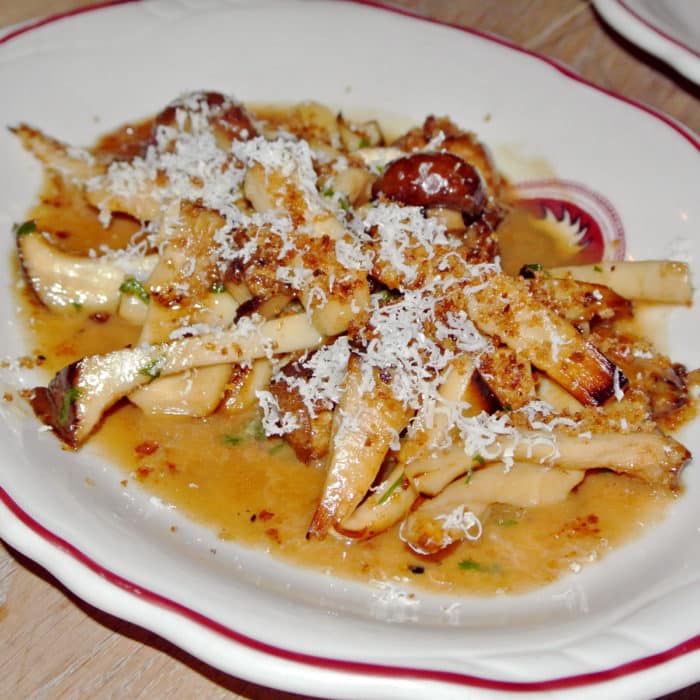 For the first of our split mains, as the story goes… one day Chef Chris’ son asked him why hamburgers aren’t made with ham. This predictably sent Chris down the rabbit hole to actually create an unpredictable one out of ham. This innovative frankenfood is the “Ham” Burger.

And would you believe it? Chris has gotten a lot of press specifically about this dish and for good reason. This thing definitely looks and feels like a burger. Dijon mustard and gruyere pair really well. Plus, it’s got a fried egg with runny yolk on top. And it’s got this unique ham-flavor thing going on since the patty is actually formed from six-day-brined ground ham. It’s pretty awesome and there’s good reason this dish is becoming famous. 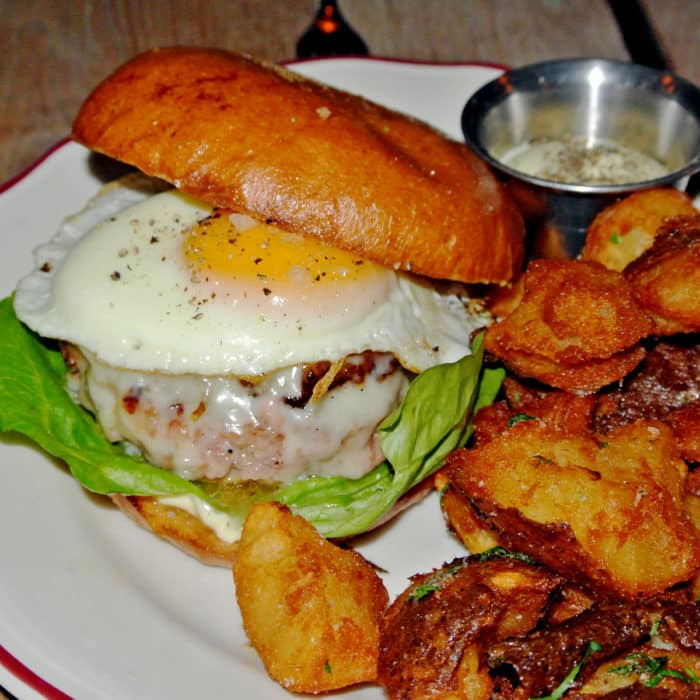 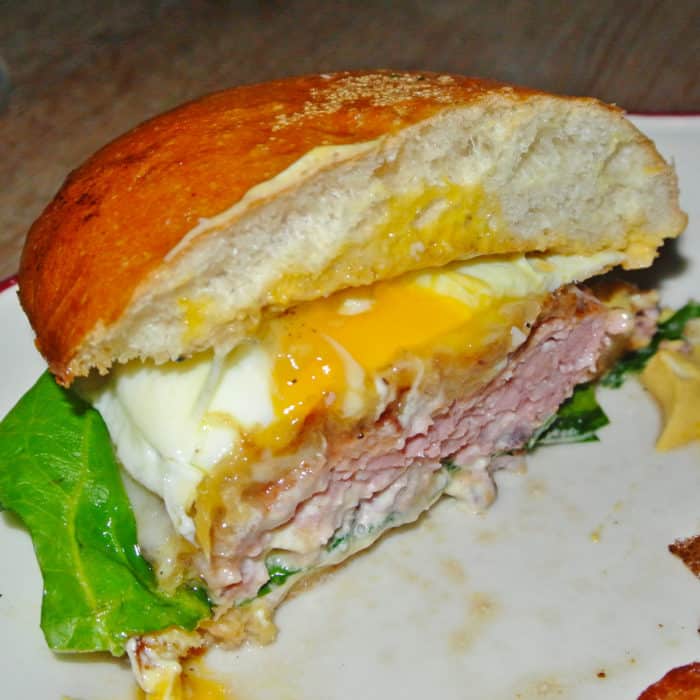 …which takes us to one of the many daily special large-format entrees that our extremely excited waiter had described to us at the beginning of our meal. The one we selected was described as Chef Chris’ take on Fried Chicken, which involved his team dredging an ENTIRE CHICKEN — head, feet, and all — in rice flour (hey, it’s gluten free too!!) then deep frying the whole beast. The kitchen was kind enough to break down the fried chicken into easily consumable pieces and then reassemble it back into whole-chicken form for show. The presentation was outrageous — truly a sight to behold.

But, this dish wasn’t just about flashy appearances. The meat was extremely crispy and juicy — really quite extraordinary actually. But, the subtle maple jus flavor (I assume a nod to chicken and waffles) really made this dish for me. The portion was enormous and very easily filled all four of us. This was a truly killer creation. *SWOON*

Oh yeah, and let’s not forget about that deep fried chicken head. That neck was not to be missed. I pulled that sucker out of the bowl and made sure to gnaw at all of that deliciously crispy fat and cartilidge before polishing off the dish. Don’t fear the chicken head! 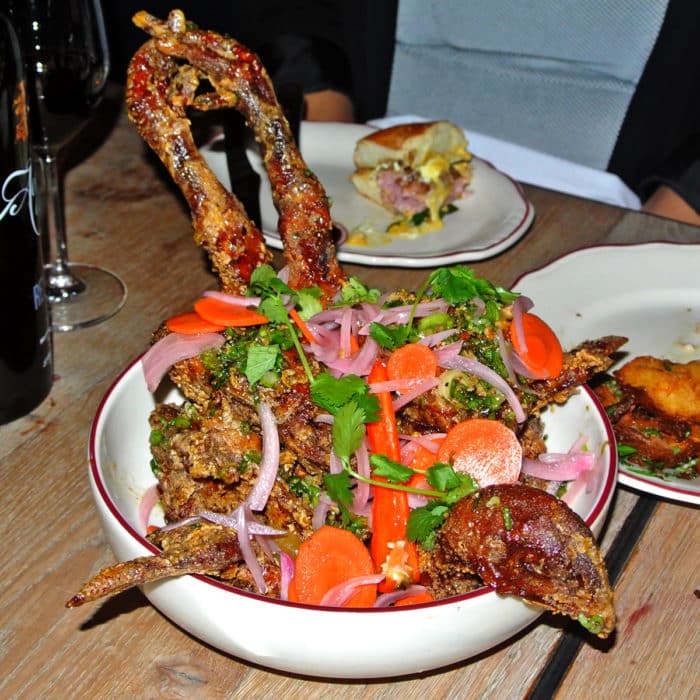 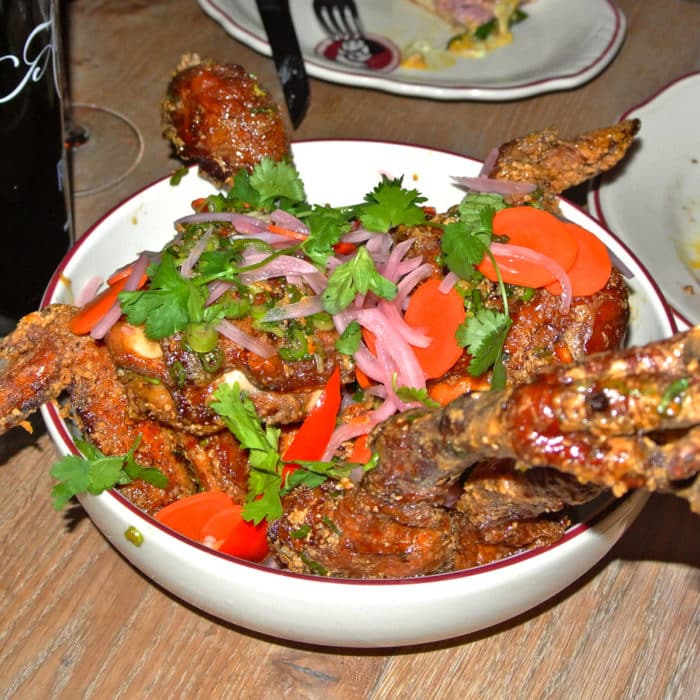 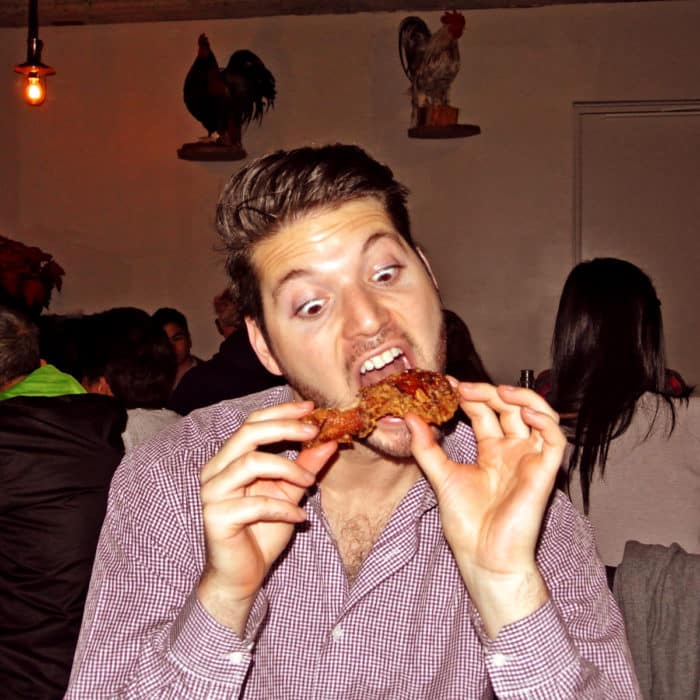 And since we had come to this restaurant for our friend’s birthday meal, the restaurant surprised her with a candle-topped dessert accompanied by a passionate rendition of the Happy Birthday song sung by yours truly.

Truthfully, if I saw Chocolate Pumpkin Brownie and Oat Brittle on a dessert menu, I wouldn’t likely order it based on its ingredients and assumed flavor profile alone. But, it was actually really well done. The pumpkin flavor was nicely integrated into the deep, dark chocolate cake and there was an appropriately heavy-handed usage of winter spices throughout. It ate kind of like a fluffy brownie cake, but in my opinion, the best part was the inventively sticky and crispy oat brittle. Also, the light, fresh whipped cream served as a great unifying element for the dish and also cooled our mouths from the unexpected, but totally welcomed bracing chile pepper heat. 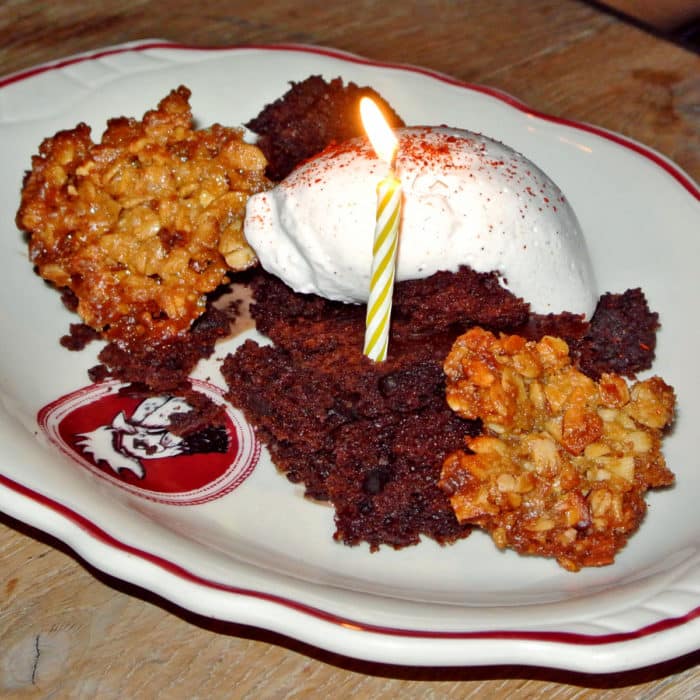 So, there it is, my friends. My first and only flawless review — 10s across the board. It’s a very special restaurant with impeccable service, but the star of the show is clearly Chef Chris Cosentino and his extremely innovative menu. The flavors are bold and there’s such an irresistible playfulness to everything that they’re creating the kitchen. I think it would be hard not to fall in love with a place like this.

Got any other dishes I need to try on my next visit to Cockscomb? Let me know if the comments below.