“Hey guys, want to go for vegan sushi in the Mission?” – a phrase I never thought I’d hear myself say.

I was with a couple friends and we had just spent the previous 24 hours gluttonously eating an drinking more than any humans should. We all felt like we needed to eat something a little lighter and healthier to heal to wounds of the binge. And given that one member of the group was a vegetarian and another vegan, Shizen, a trendy, new Mission Japanese hotspot with a completely vegan menu seemed like the perfect place for the job.

Ordinarily, I’d be wary and repulsed even by just the concept of vegan sushi, but I’ve already experienced this sort of sorcery at a brilliant NYC hole-in-the-wall called Beyond Sushi. However, Shizen, which is situated at the north edge of the Mission, right at the crossroads of SOMA and Duboce Triangle is a much swankier, sexier sit down spot in comparison. And it’s a really beautiful space. They’ve successfully taken a blank canvas restaurant space on the ground floor of a boxy, new, modern apartment complex near Mission Street’s chaos and transformed it into a stylish, Japanese oasis. A dark wood arched framework spans the entire length of the ceiling, giving the restaurant a cozy, defined, zen garden feel. All of the decor from the wood barn-like structure to the wood stump block seats, vertical moss terrarium walls, and everything in between felt so completely natural and organic – and it fits.

At Shizen, the entire menu focuses on skillfully utilizing and transforming vegetables and other meat-alternatives in place of other proteins. Actually, Shizen is the latest venture from the Tataki people, who developed the concept for San Francisco’s very first and much-loved sustainable sushi joint. Just like Tataki, where the chefs carefully make sushi with sustainable alternatives to commonly used fish, Shizen treats their main ingredients with just as much honor and respect. In this case, though, those ingredients are all vegetables and meat analogs. Shizen prides itself on their use of sustainable, environmentally friendly, and completely vegan ingredients throughout every dish and they do a great job making each one shine. Just like the nearby vegan Mexican spot, Gracias Madre that I was surprised to learn that I actually loved, Shizen comes with an equally as enthusiastic reputation suggesting again that meat-eaters won’t even realize the menu is completely vegan. Challenge accepted, but this time I know that it may actually be possible. 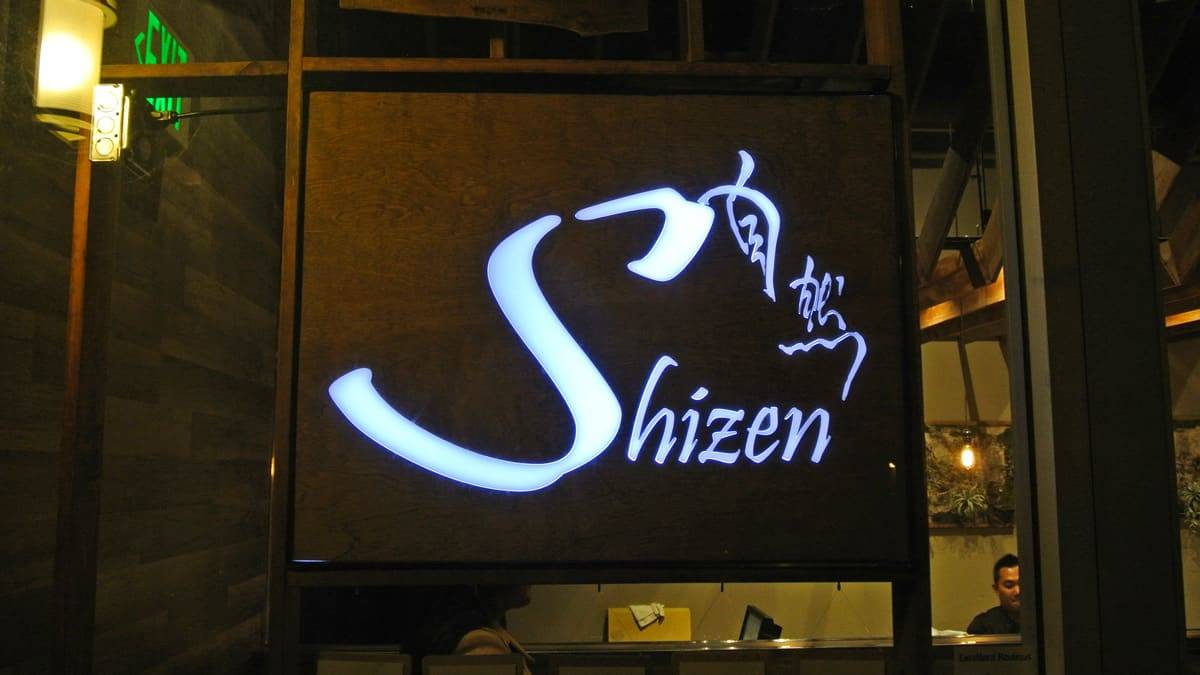 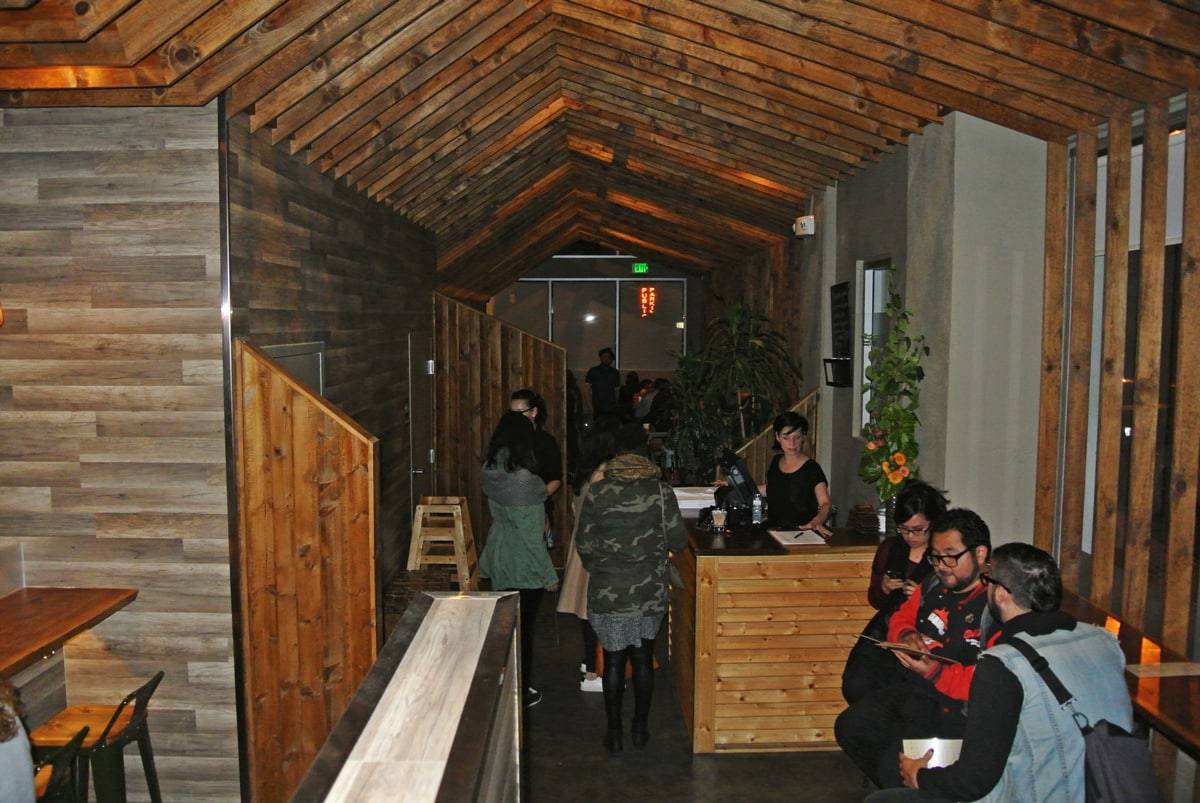 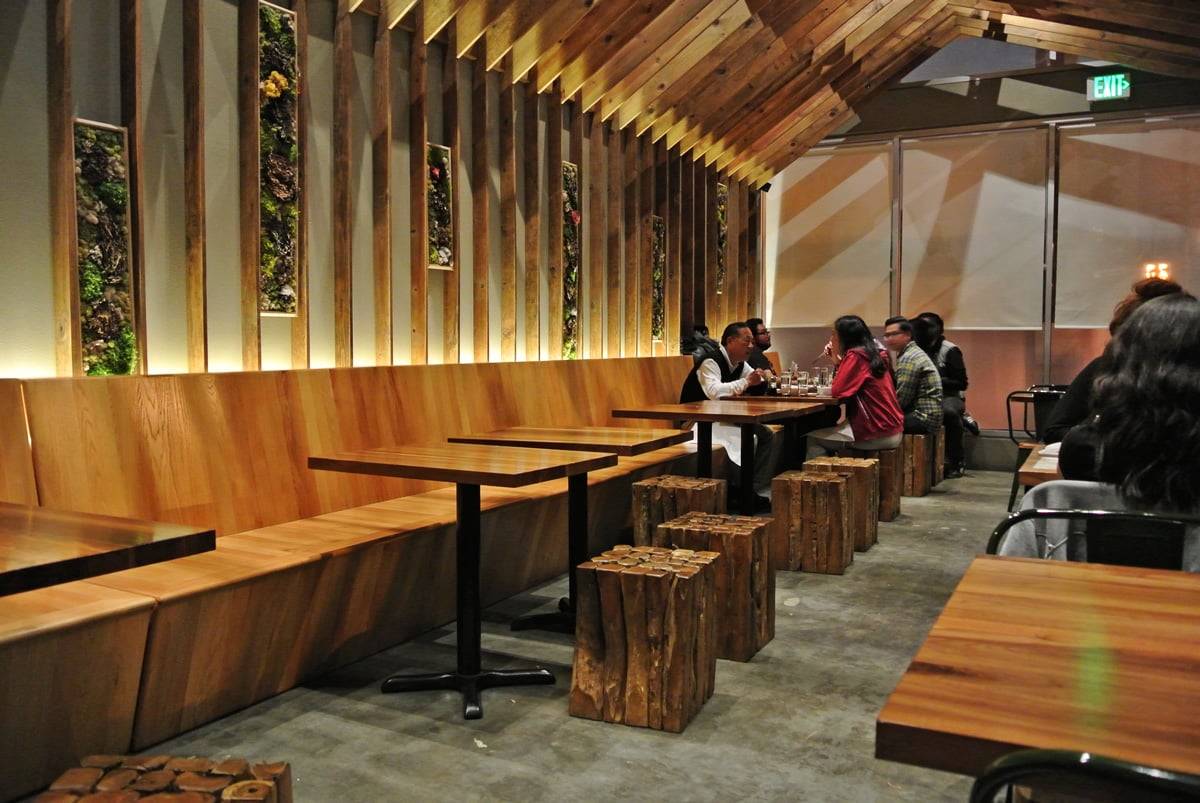 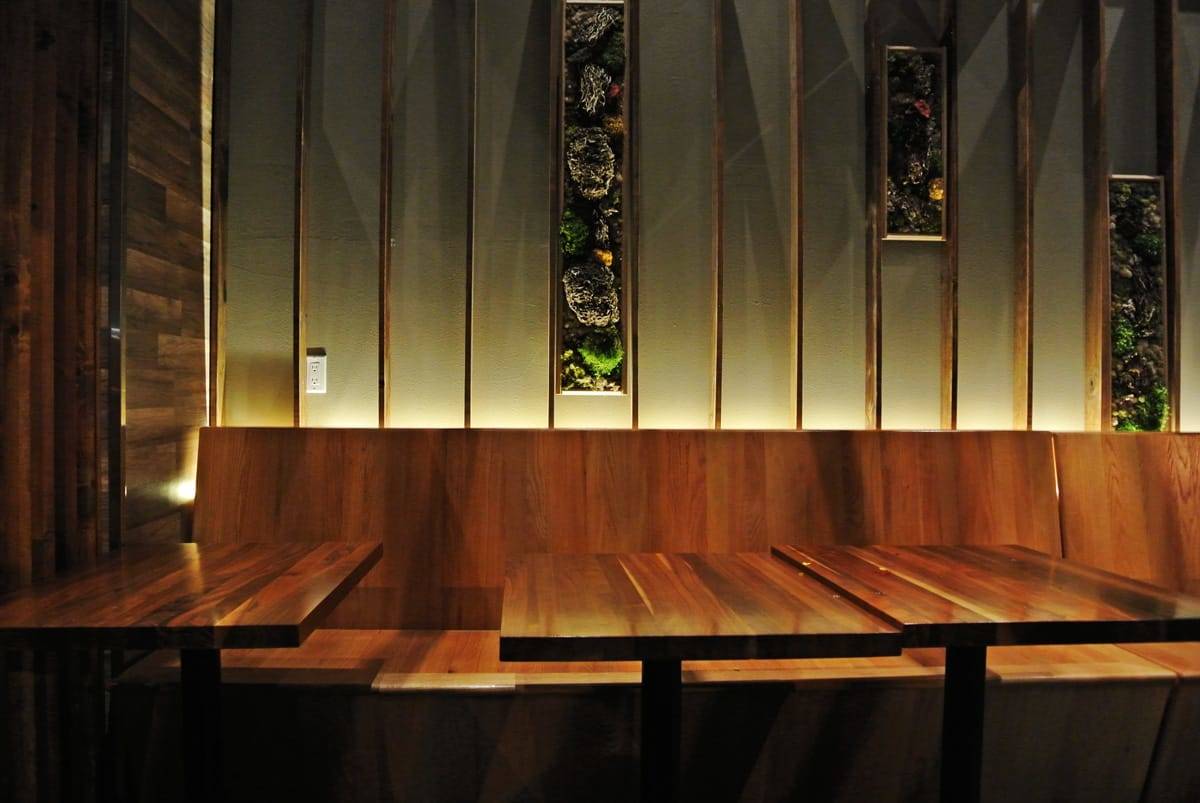 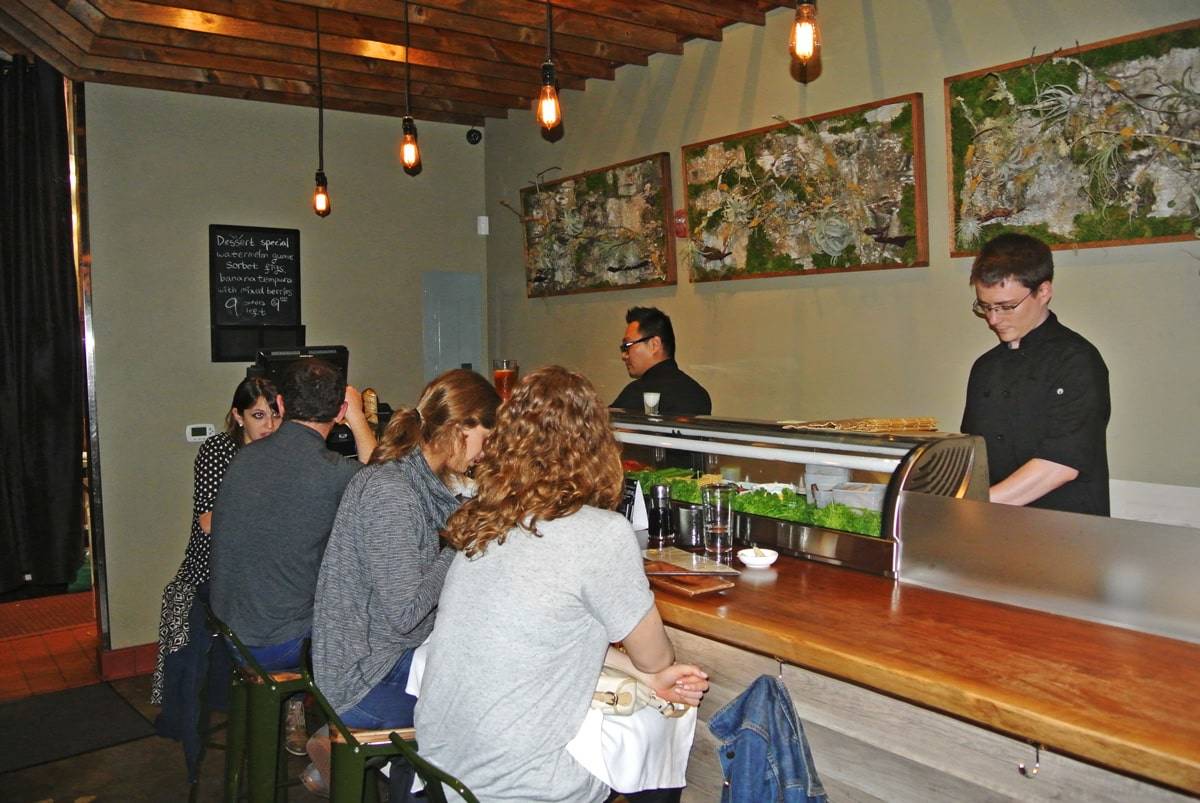 Between the four of us, we decided to order a variety of plates spanning the entire menu to split and share. My vegan friend was particularly ecstatic that she could for once partake in literally everything on the table.

The first plate to arrive was a cold eggplant dish called Nasu Agebitashi. This simple dish involved large blocks of chilled, grilled eggplant dressed with mirin, soy, and ginger. It was a clean, straight-forward, filling dish that was actually quite nice if you enjoy eggplant in all of its many forms like I do. This was a solid deal at $6.

Next up were the vegetable and tofu filled pan-fried Gyoza dumplings. The texture and thickness of the wrappers were spot-on and the crisp pan-fried surfaces were executed expertly. The filling was nice too, though it definitely would have been relatively mild without relying on the dipping sauce. Nice, but at $7 for six, which equates to over a buck a piece, I might select something else instead. 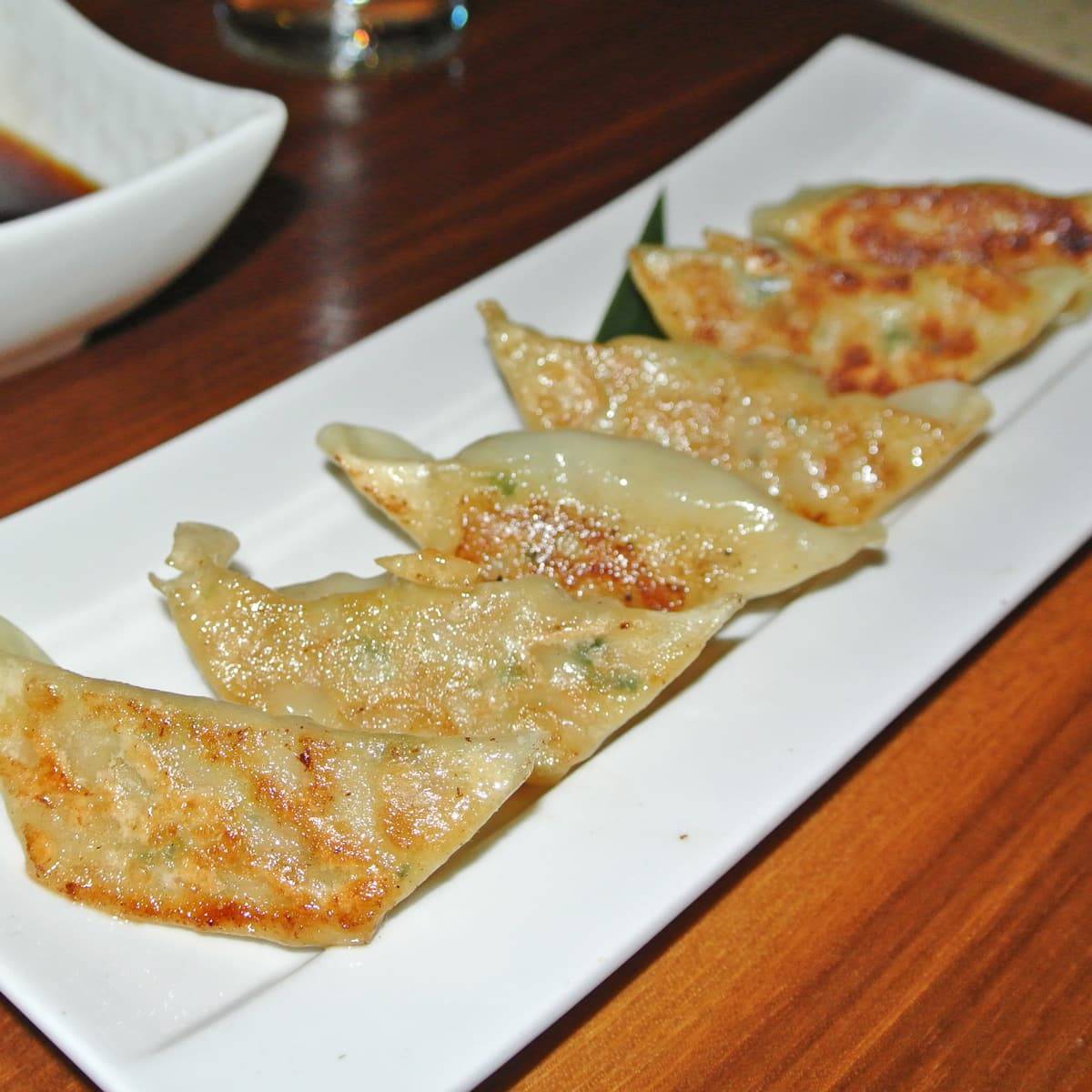 From the Uramaki section of the menu, we chose the Philadelphia Roll. Ordinarily, I shy away from Philadelphia Rolls because there’s just something about cream cheese in sushi that rubs me the wrong way.

This roll, however, had no cream cheese since dairy is not vegan-friendly. It was filled with smoked bean curd, avocado, and creamy tofu and was actually much more delicious than its non-vegan counterpart. I loved the firm consistency and rich flavor of the smoked tofu and the texture of the creamy tofu worked much better than super-dense, cold Philadelphia cream cheese usually does. At $7, this roll gets my seal of approval. 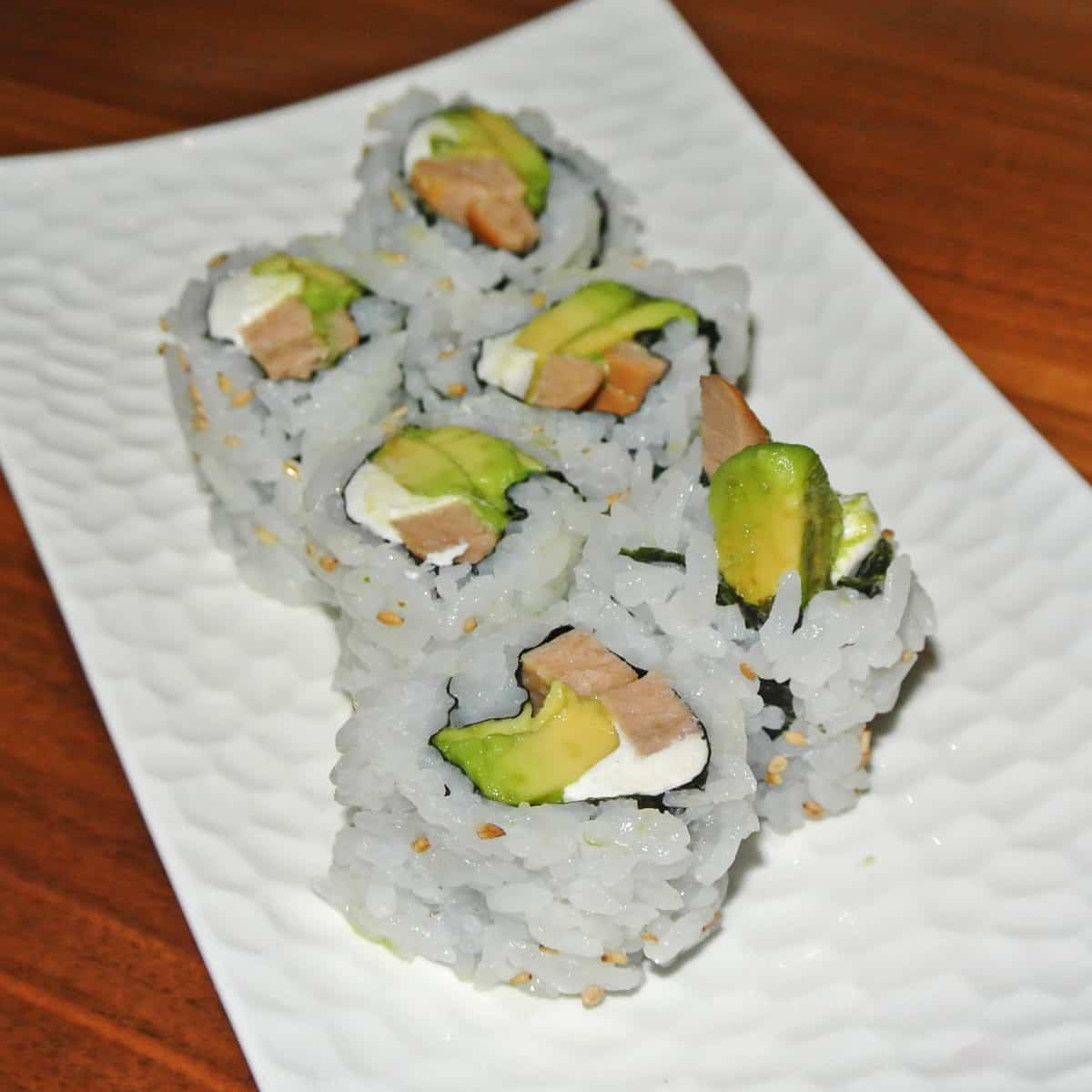 From the Hosomaki section of the menu, we selected the Umeboshi Roll. This small, simple maki was filled with umeboshi – an usual Asian ingredient that’s actually a sour and salty pickled plum – with cucumber and a sprinkling of salt. If you’re never had umeboshi, I’d recommend the order for $5, though its definitely leans both mild and salty.

Then, it was time to try some of their fancy-looking Signature Rolls. I’ve definitely voiced my mixed feelings about wacky, over-the-top mayo-smothered sushi rolls in the past, but I do know that if they’re artfully and cleverly done, they can actually turn out great.

The first was the Scarlet Smile filled with avocado and crispy, sweet potato tempura and topped with spicy beancurd, roasted red pepper, and seaweed pearls. It certainly had a similar look to fancy rolls at a normal sushi spot and if I’m being completely honest, it felt and tasted a heck of a lot like them too. The roll’s topping actually emulated the flavor and consistency of spicy tuna quite well and was fully-loaded with a complex combination of textures and flavors. Even the red, vegan, seaweed pearls on top served as a successful stand-in for little poppy orbs of fish roe. At $12, I’d actually order this again. 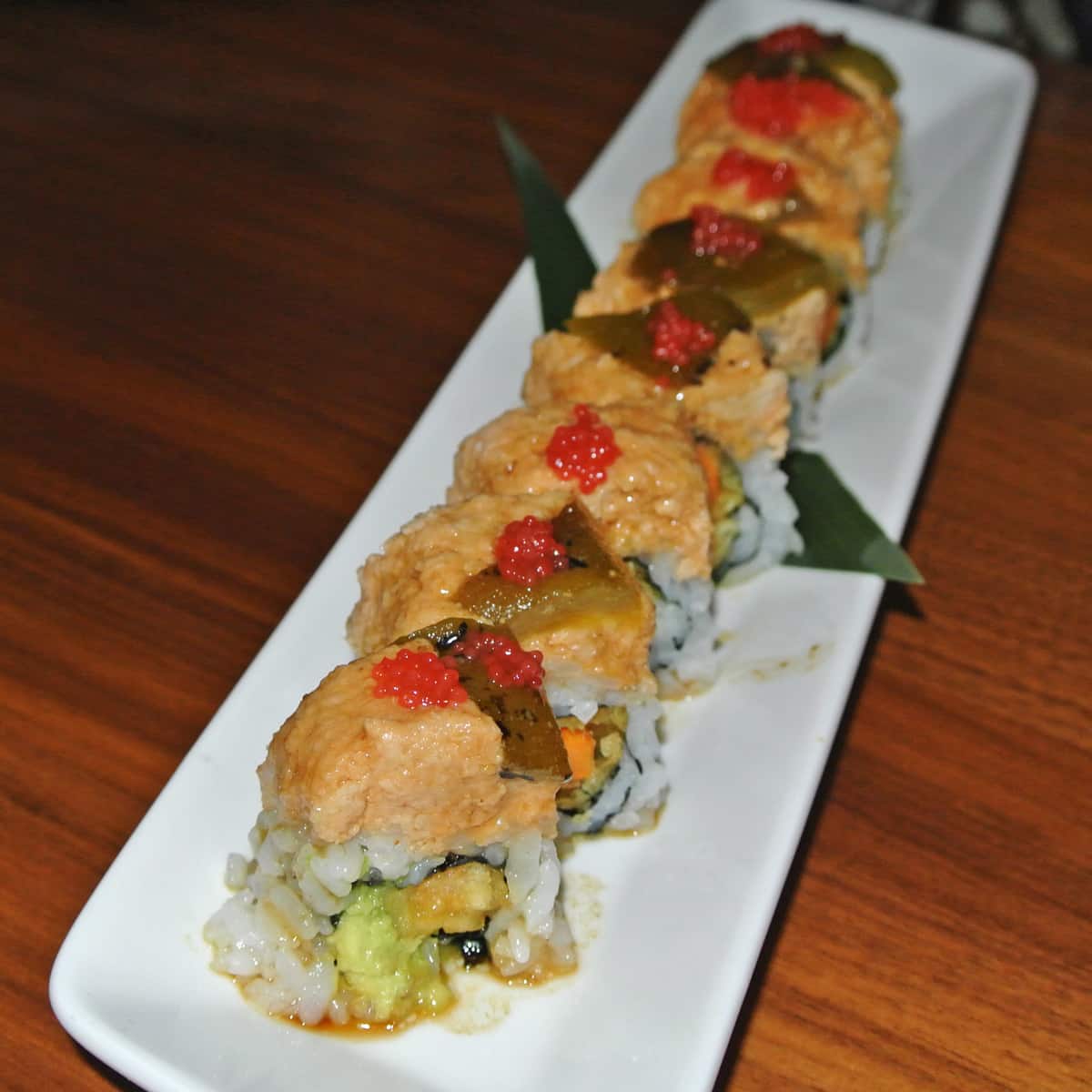 The next roll, the Candlestick, was the one thing that I insisted we order. The menu listed its ingredients as spicy beancurd, avocado, tapioca, cucumber, seaweed pearls, and fire. Yes, FIRE.

This plate arrived at our table with a tall, orange flame plume licking at the rolls. Sure, some part of that was certainly a gimmick for pure performance’s sake. But still, how am I supposed to resist getting in on that kind of fun? It wasn’t listed as an ingredient, but the plate was also drizzled with sriracha, which added an appropriately spicy kick to each of these tasty bites. The flame was cool, but the roll was actually really delicious too. This was another good buy at $12. 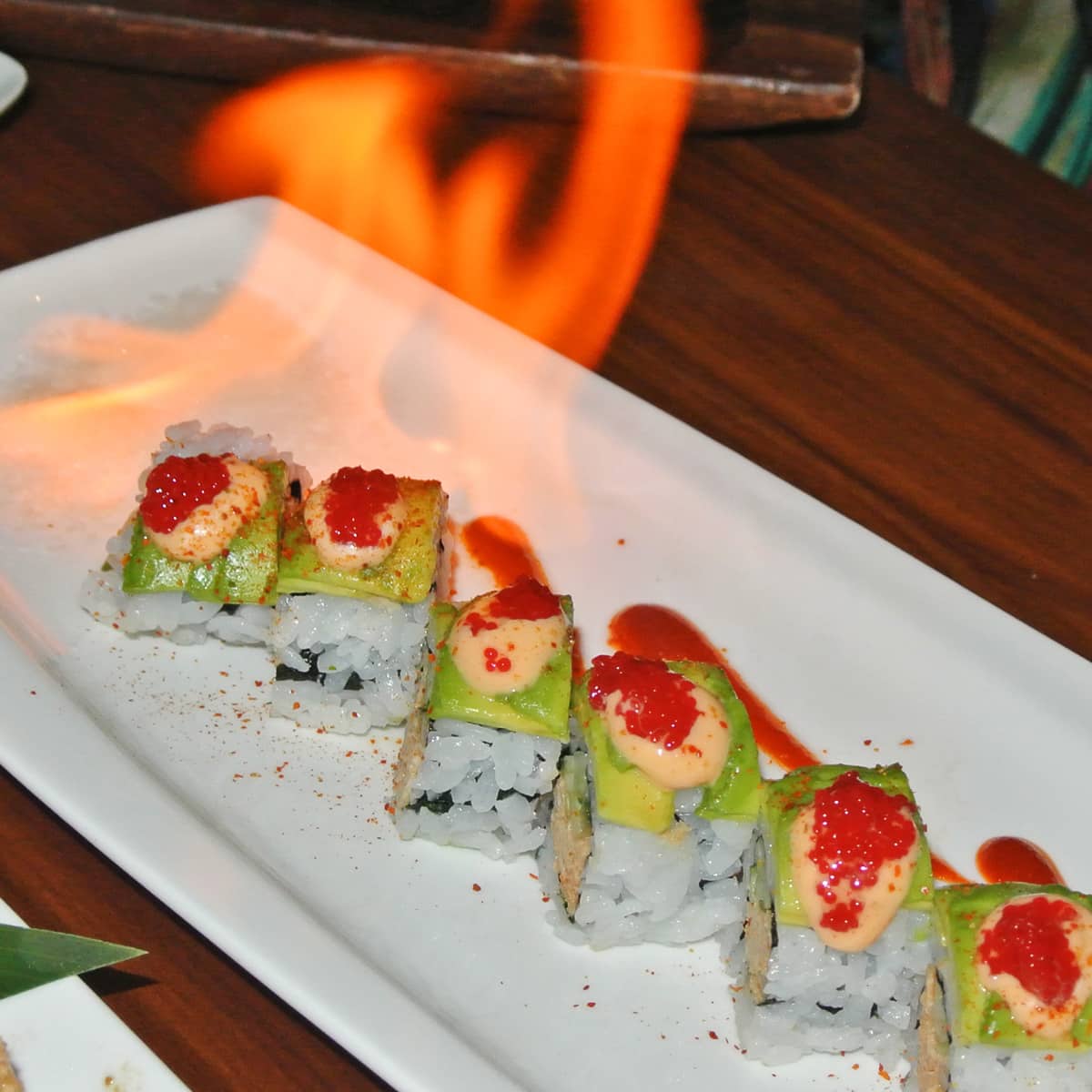 I found that the next plate called the Plot Twist was particularly visually interesting. The roll was first filled with sweet potato tempura, smoked beancurd, and was then the whole roll was completely tempura battered and fried. This entirely fried roll was sliced up and topped with generous handful of diced tomato, onion, mango, yuzu and shiso. The crunchy texture was very great and the bold, flavorful, tropical salsa topping aded unique complexity. This was also great at $12. 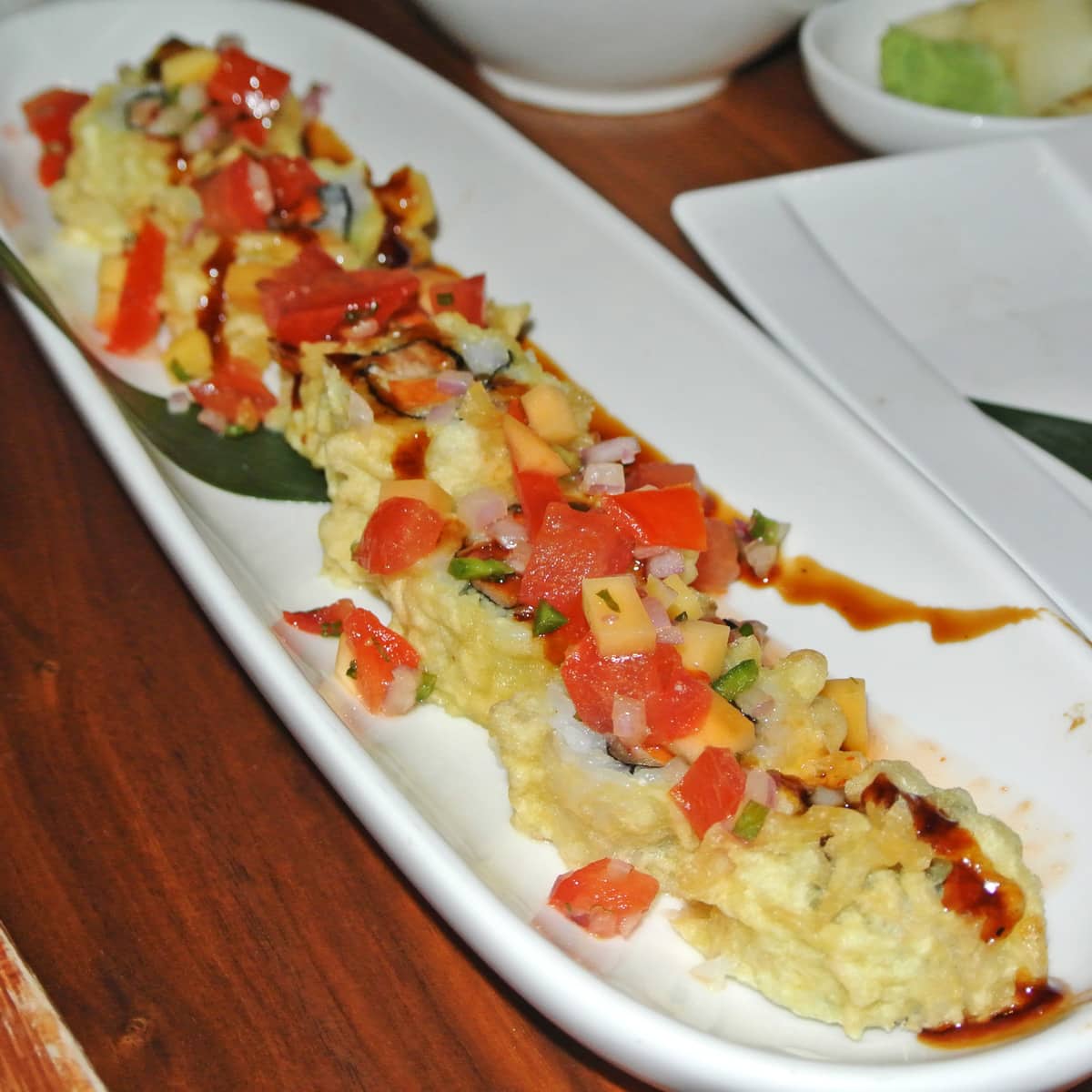 Next up was another must-order according to Foursquare tips – the Surprise Ending. This was an absolutely gorgeous plating of six rolls topped with thin-sliced beet encircling a shot glass of sake along with a decorative sprinkling of edibles flowers and microgreens for even more beauty. I thought the glass of sake was the surprise, but no, that was not the case. It was actually reserved for the person who receives the real surprise. Eating this roll is a lot like playing a game of Russian Roulette. One of the six rolls is loaded with an obscene mound of wasabi, but you’ll never know which one it is until that unlucky person fully bites in. But, none of us actually knew that this was a game that we were playing despite the fact that the menu listed one of the rolls ingredients as “suspense”.

We immediately figured out what “suspense” meant when Navriti bit in. Her face lit up like a nuclear bomb went off in her head. She frantically began reaching for anything cooling she could get her hands on. The hot tea, the water, the cucumber in the water, and then enlightenment – that glass of milky, white nigori sake in the middle of the plate. The perfectly prepared coolant. It didn’t seem like she partially enjoyed the explosive, loser bite, but we all enjoyed partaking in the sadistic experiment. All of the other pieces were actually quite tasty and nicely flavor balanced with a dominant characteristic contributed by the bold beet slice flavor. At $13, you should definitely get one of these interactive and exciting dishes for your table. 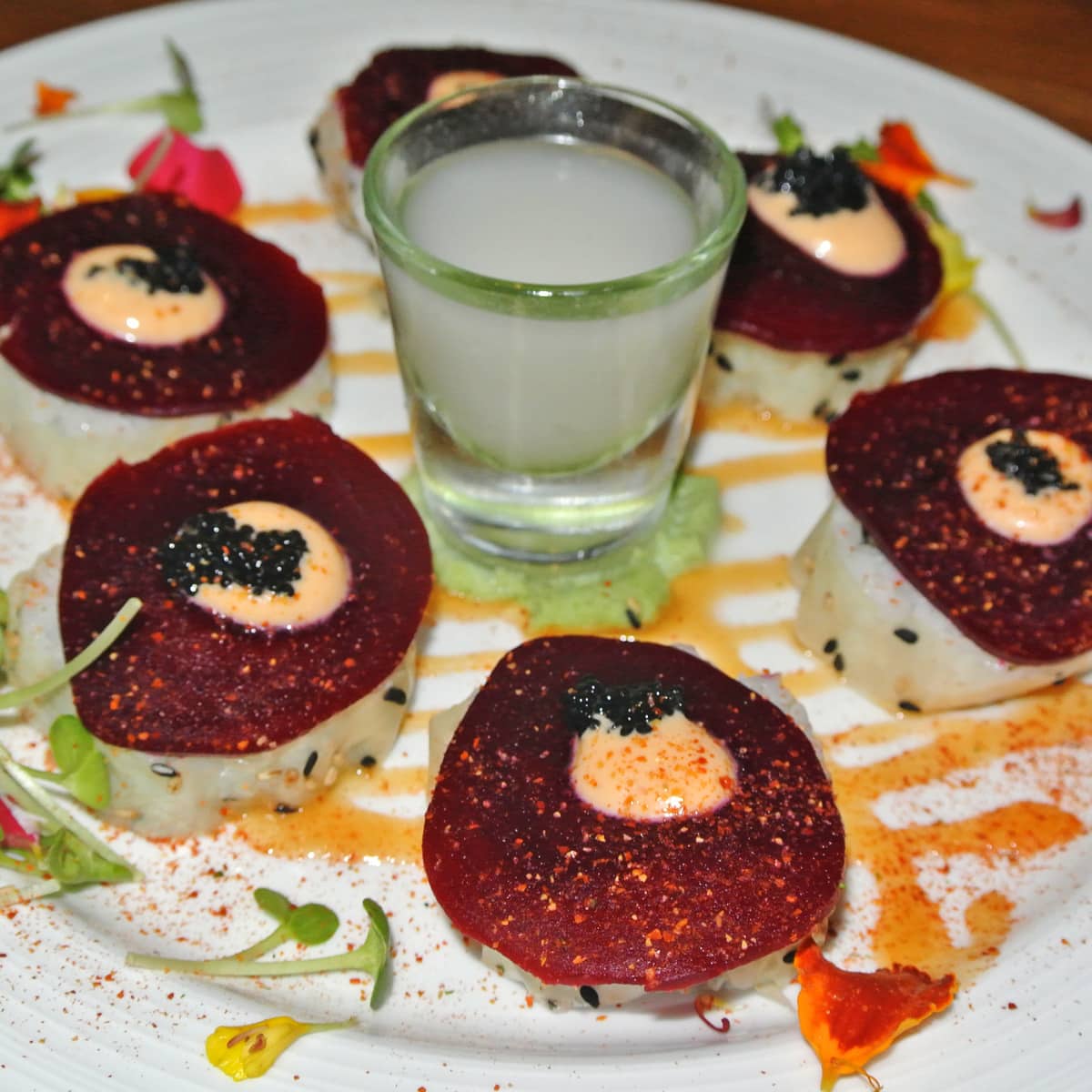 To close out the meal, we had one last roll called the Proud Peacock – a vegetarian riff on the Rainbow Roll. This one was filled with cucumber and avocado and came topped with a beautiful layering of shitake, eggplant, tofu, pickled mango, and roasted peppers along with a seaweed pearl garnish on top. Each piece was loaded with its own unique and interesting combination of flavors and textures, though my favorite bites involved the very savory roasted red peppers not traditionally found in this type of cuisine. I’d definitely recommend this roll as well for $13. 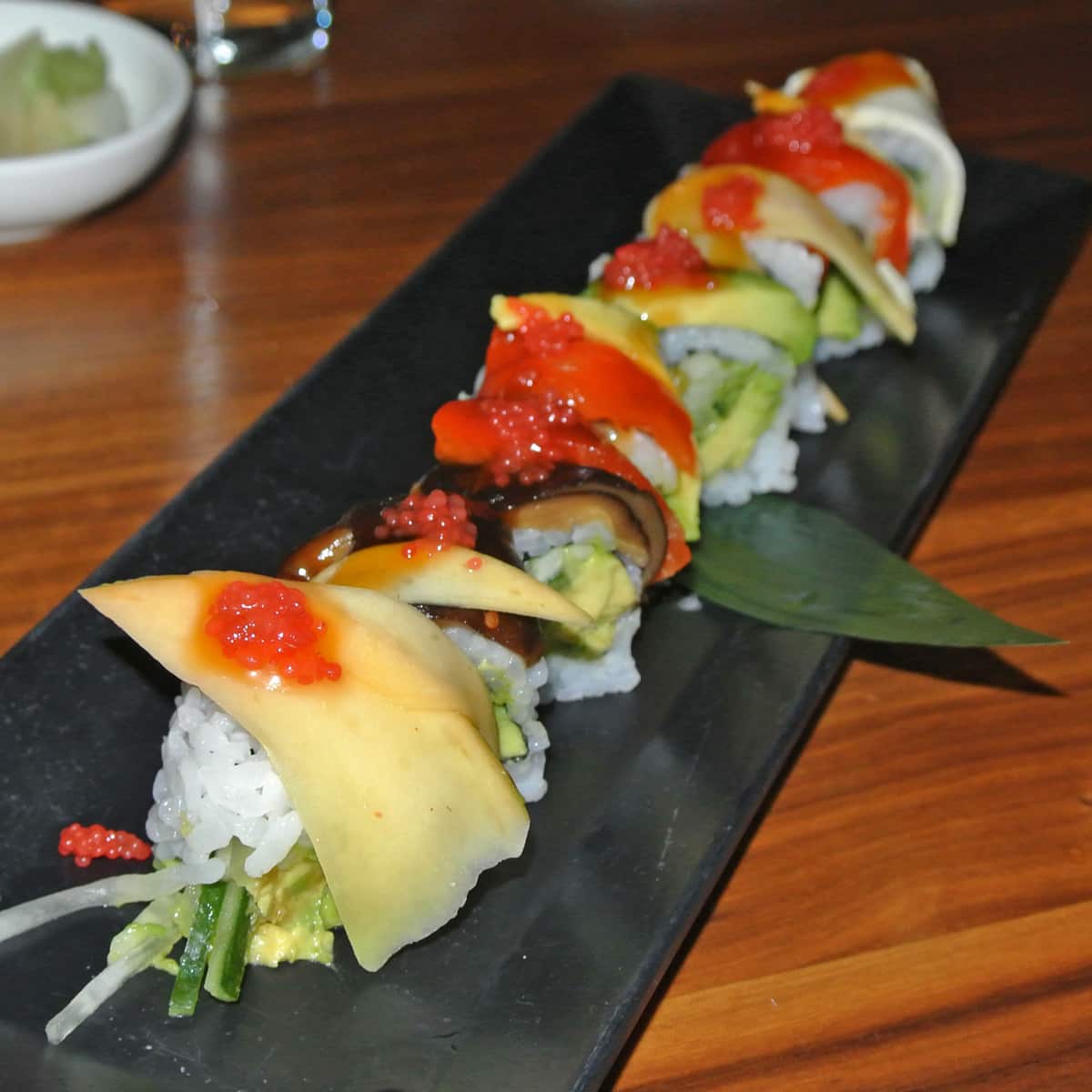 So, we finished up the last of our rolls – still marveling at the level of satisfaction we were all able to derive from this truly delicious and filling vegan sushi meal. This place was incredibly impressive and has somehow figured out how to transform humble vegetables and soy-products into convincingly awesome sushi. My hat’s off, but if that’s not enough to get you to try it, get this – this filling meal for four didn’t even come close to breaking the $100 mark. Extremely impressive, all around. I’ll be adding this to the extraordinarily short list of vegan places that I’ll actually willingly go to.

Got anther vegan eatery in San Francisco that you think I’ll actually enjoy? Let me know in the comments below.