Let’s face it. If you’re in New Orleans, you’re gonna end up in the French Quarter. Where you’re there to take in the history or to check out the Bourbon Street madness – to drink a hurricane at Pat O’Briens or any of the other drunk-magnet bars – you’re bound to end up there.

Since you’re definitely going to be there, you’re gonna need to know of a few great places to eat. Despite it being a very touristy area, there are still many actually great places to eat. There are famed oyster halls like Acme, cheap eats classics like Central Grocery and Cafe Du Monde, and the many famous, super old-school, French dining parlors. But, you can still definitely choose wrong and end up with a really bad meal. If you want something new, exciting, and different, I’ve got just the place. This restaurant, Sylvain, is a hot addition to the French Quarter dining scene that’s perfect for a civilized, sexy, date night full of great Southern food and cocktails.

Before I spotted their street signage and headed down their old, peeling, candlelit entry hallway, Sylvain seemed very discreet and understated from the street. It was inconspicuously poised on a quiet block behind thick, brick and plaster walls. You probably won’t even notice it either if you’re not specifically looking for it. It’s easy to get to, though – it’s centrally located on Chartes Street in an old, historic three-story carriage house that was originally built in 1796 and is actually only a block from the famed Cafe Du Monde and two blocks from the Bourbon Street chaos.

These days, the aged space has been completely transformed into a very, very sexy, low-lit restaurant. It consists of a long, candlelit entrance, a relatively compact dining room, a large, well-stocked cocktail bar, and a big, outdoor back courtyard with tables to dine under the NOLA night sky. The kitchen interestingly was tucked away under a set of stone stairs – which ends up looking and feeling like a sort of Harry Potter closet.

But, despite it’s calm outward-facing facade, it was actually a very happening place inside. This new and very popular spot is known to book up early, so we made our dinner reservation a few weeks in advance. The playlist featured plenty of upbeat classic rock like Led Zeppelin pumping overhead. It was definitely pretty loud in there, but nothing out of control to prevent you from talking to your date. The restaurant definitely draws in a very New York and LA-heavy crowd – you can just tell by looking around. 90% of the place was filled with large tables of hot girls with the other 10% consisting of handsy middle aged dudes on dates with much younger girls. Listen up single guys, this is the classy French Quarter bar you’ve been looking for. 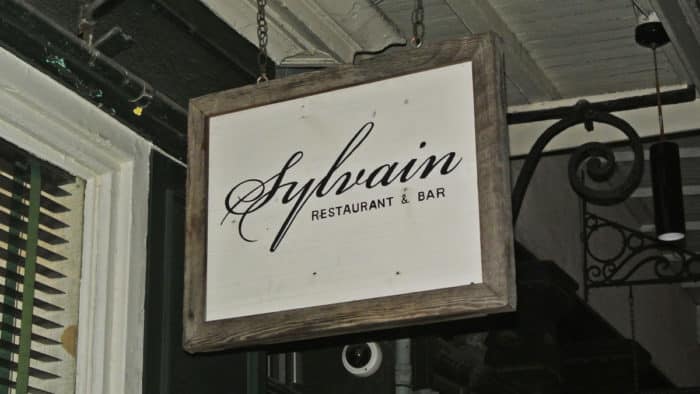 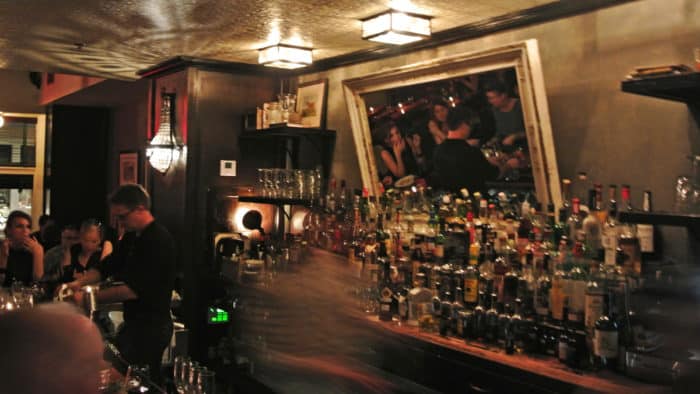 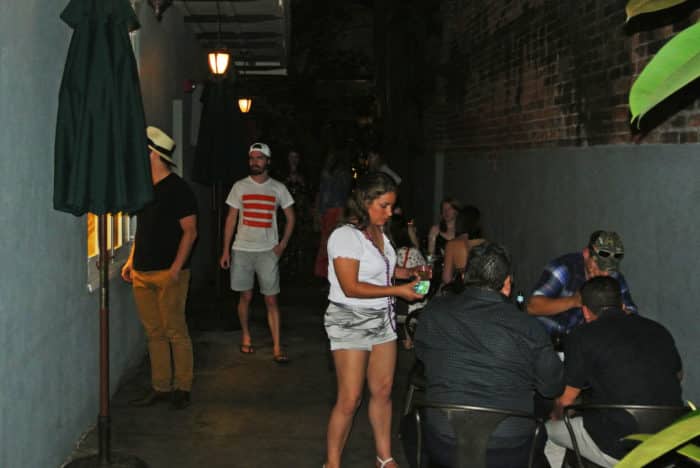 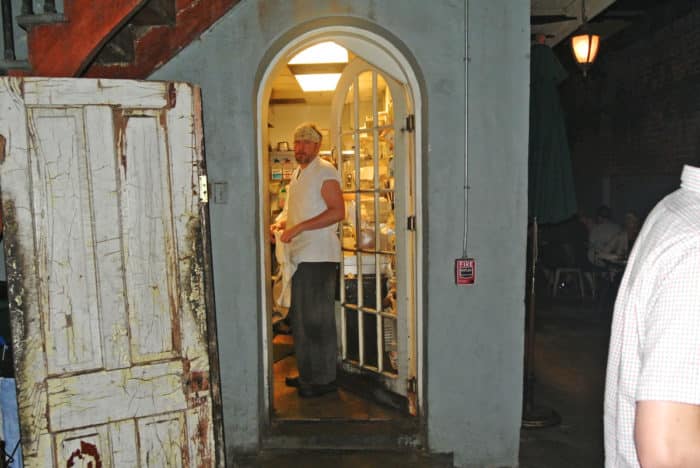 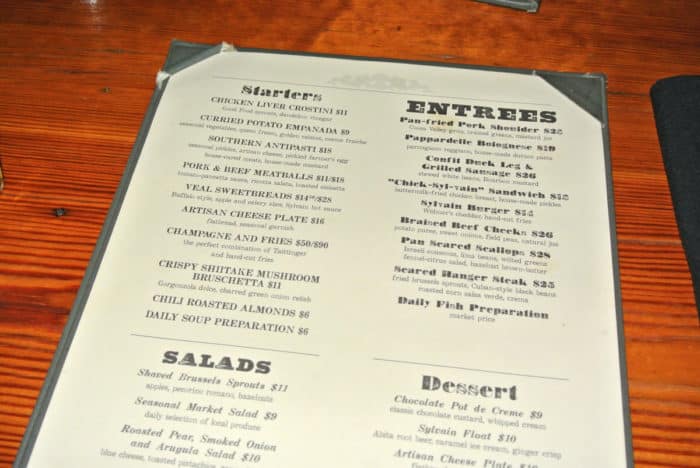 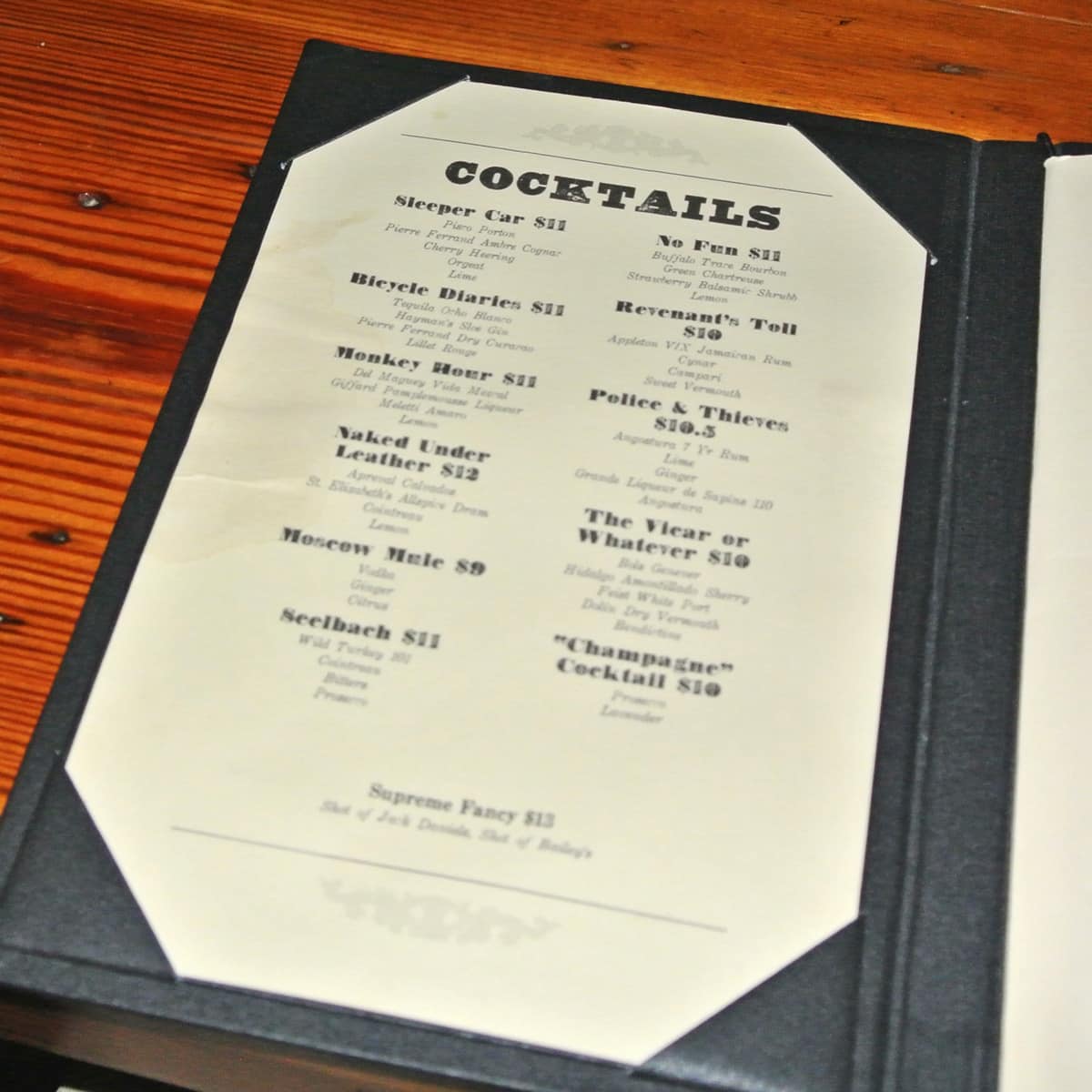 Since New Orleans is a major drinking town, Sylvain of course features an impressive cocktail bar.

Of the eleven cocktails being offered that evening, I found myself drawn towards a drink called Monkey Hour. It was made with Del Maguey Vida Mescal, Giffard Pamplemousse Liqueur, Meletti Amaro, and lemon. This was a killer mescal cocktail. I found that it was quite strong and boozy, but still retained a very well-balanced smokey character that mixed well with the rich, herbal amaro, sweet grapefruit liqueur, and citrusy lemon juice. 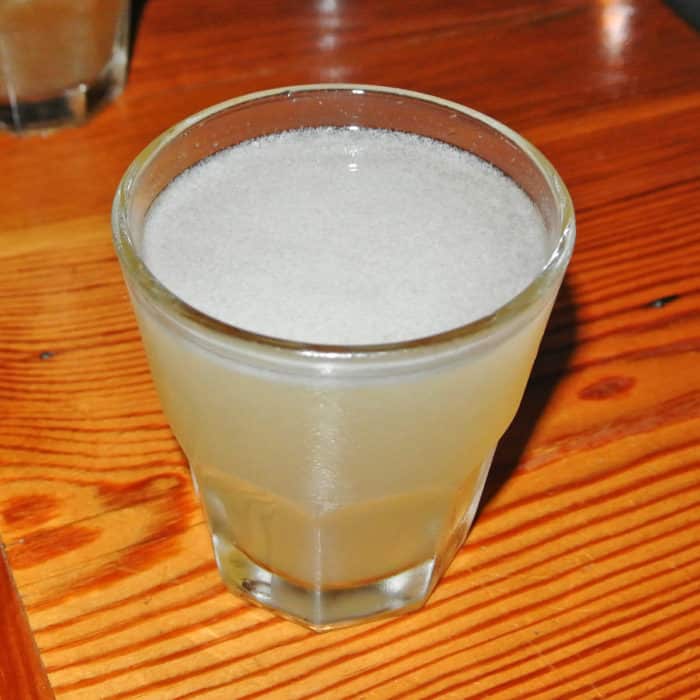 Later on in the meal, I allowed myself to indulge in a second cocktail, the No Fun. This was a strong whiskey-based drink that I was bound to like based on the ingredients. It was made with Buffalo Trace Bourbon, Green Chartreuse, Strawberry Balsamic Shrub, and Lemon. The chartreuse added a nice texture and complexity to the drink while the Strawberry Balsamic Shrub added a great sweet and sour twinge to the mixture. This cocktail was another real winner. 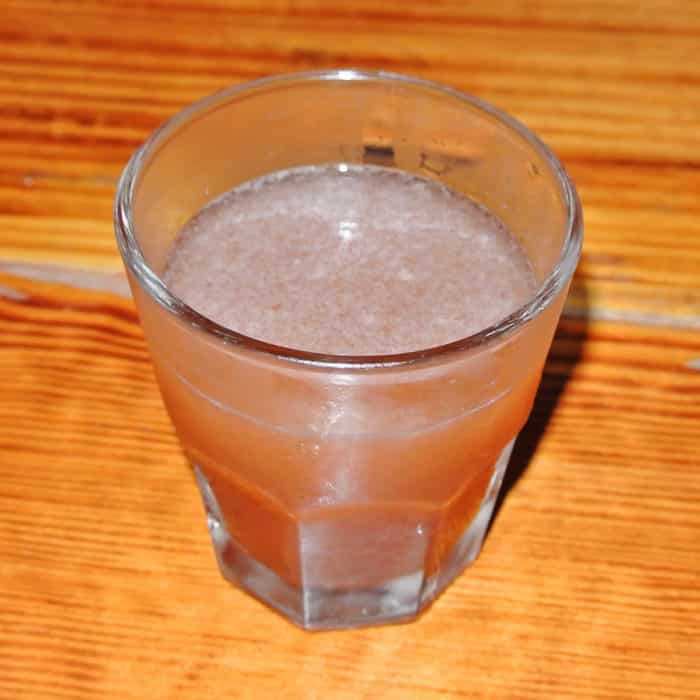 For our meal, Amy and I decided to split a single appetizer and two mains.

Everything on the menu sounded really great, but there was one starter in particular that had caught my eye. I was completely surprised and excited to find that Amy was interested and willing to try Sylvain’s Veal Sweetbreads. Sweetbreads are an organ meat that would be frightening and mysterious to most, but when done properly, they can be truly amazing. I think the buffalo-style preparation and apple-celery slaw topping were enough to convince her to order them.

Honestly, these were the best sweetbreads I’ve ever had. They were cut into manageable, little bits and were cooked perfectly so that they became extremely tender nuggets of mysterious, but delicious meat. The buffalo hot sauce flavor was wonderfully tangy, spicy, and creamy – such an incredible pairing. And just when the sauce’s heat became too strong for either of us, the thin-sliced apple and celery slaw was there to cool our mouths off. This was a truly amazing and adventurous dish.

From there, we moved on to our mains, which each involved crazy-good meats.

First, the Pan-fried Pork Shoulder which I imagine is what would happen if pulled pork and a crispy crab cake had a baby. The pork patty was intensely flavorful – well-spiced and boldly garlicky with a truly impressive charred crust on each side. It was smothered with a creole mustard that was a perfectly bold pair with the tender, crispy meat patty.

It was served over a pile of snow white grits that were admittedly served slightly cooler in temperature than I like, but the chunky texture and bold sweet corn flavor was so good. Those greens were also cooked really well – they were tender, juicy, flavorful, hot, and surprisingly spicy. And I truly hate to disparage my chef-crush, Cochon’s Donald Link, in any way, but this was the exact dish that I was hoping his good, but far less-exciting Louisiana Cochon was going to be. I could die happy eating this Pan-fried Pork Shoulder as my final meal. 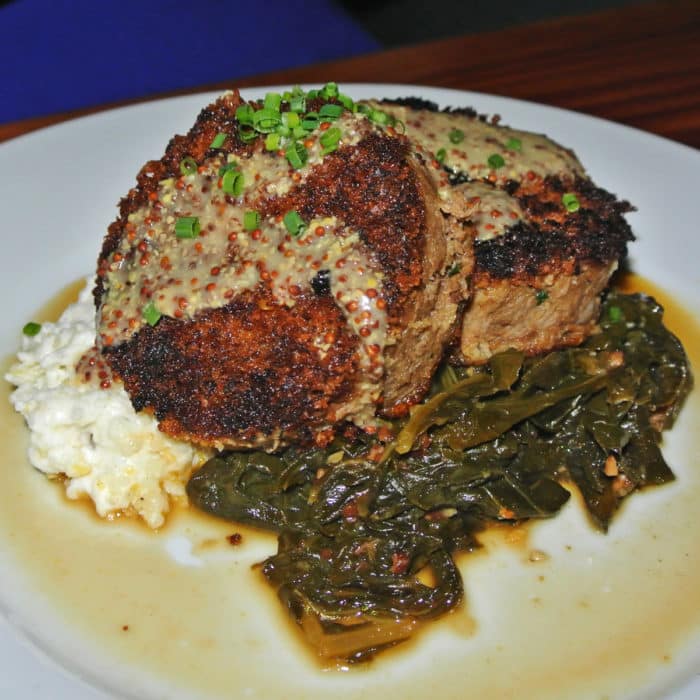 The other main we ordered, Braised Beef Cheek, was also incredible. It was extraordinarily tender and juicy – every bite quite literally melted in my mouth. It came served over a mound of mashed potatoes, which were nice, but I thought the other dish’s more flavorful, chunky, corn-loaded grits were way better. The best way to enjoy this dish involved making an awesome mega-forkful of those awesome black-eyed peas with a hunk of that extraordinary beef cheek, a bit of mash, and hearty swipe of jus. This dish was great, though definitely less intensely flavorful than the pork. 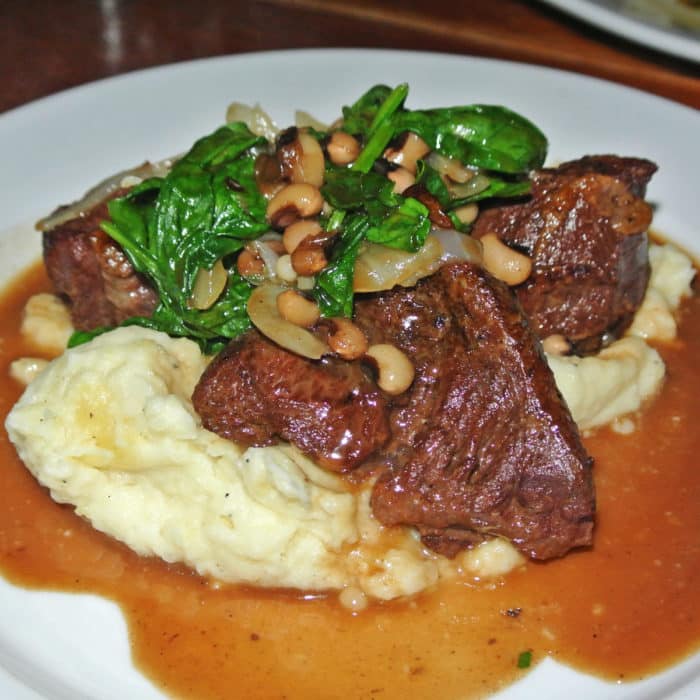 So, I’d say that Sylvain is really excellent addition to the upscale French Quarter dining scene. It’s far less traditional than many of its neighboring competitors, but the food was really quite outstanding. Between the flavorful, adventurous dishes, high-quality cocktails, and warm, inviting atmosphere this place is a true date night gem.

Got another great new restaurant in NOLA that I should check out next time I’m in town? Let me know in the comments below.