I can say with absolute certainty that Napa is not an easy place to find a delicious and reasonably priced meal. It’s filled to the brim with fancy schmancy high end spots ready to consume your entire pay check in a single fell swoop. Sure, some of those places are great or even incredible, but I wouldn’t suppose that a meal at that price point is always in the cards. When I find myself in Napa, there is one place that has a number of great, reasonably priced options that I find myself returning to time and time again – The Oxbow Market.

This gigantic warehouse style marketplace is located only a few blocks from downtown Napa and is occupied mostly by high quality food and beverage vendor stalls selling all types of food related things ranging from cheese to coffee to fresh produce and even to artisanal bitters. If you’ve ever been to San Francisco’s Ferry Building or New York’s Chelsea Market, you’ve pretty much got the idea of the kind of place this is. And nestled amongst the many vendors, there are even a few places serving up excellent fast-casual lunchtime meal options.

One such place is one of the four outposts of the Hog Island Oyster Co. which is situated at the far end of the market and even has its own outdoor patio space. Grabbing a seat at the massive raw bar would be nice, but if you’re lucky enough to show up on a gorgeous, hot and sunny day like the one I had, I’d recommend grabbing a seat at one of the outdoor tables. In the context of the market, this restaurant is pretty gigantic – it takes up about twice as much space as any of the other vendors – but it’s presence is well-deserving of the attention it demands. 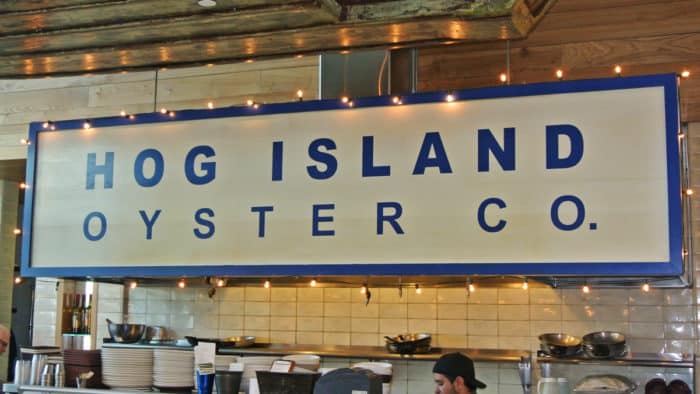 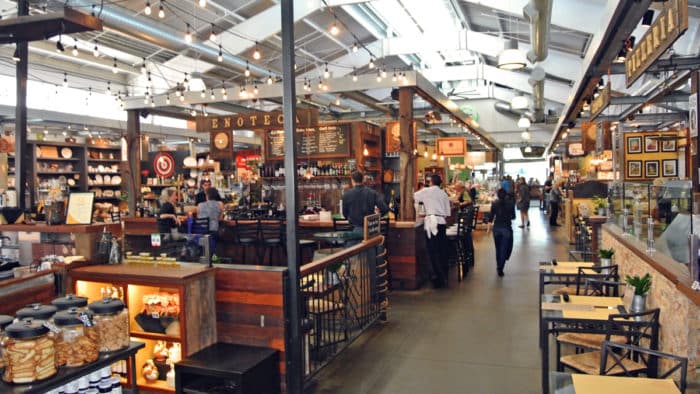 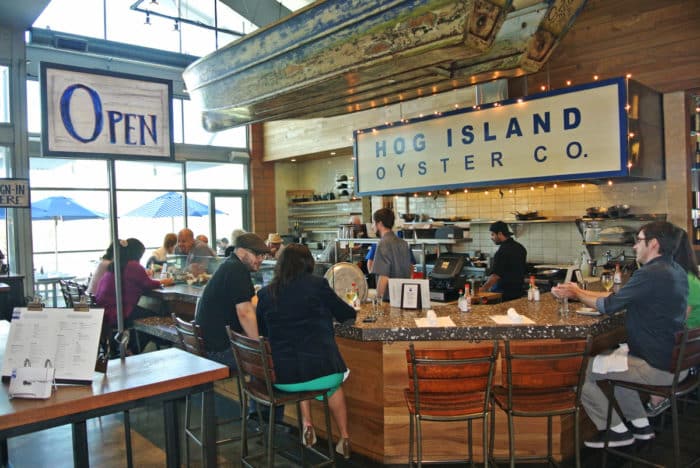 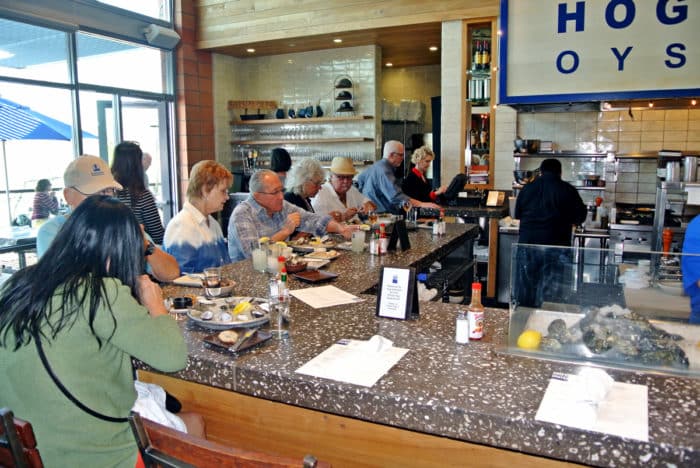 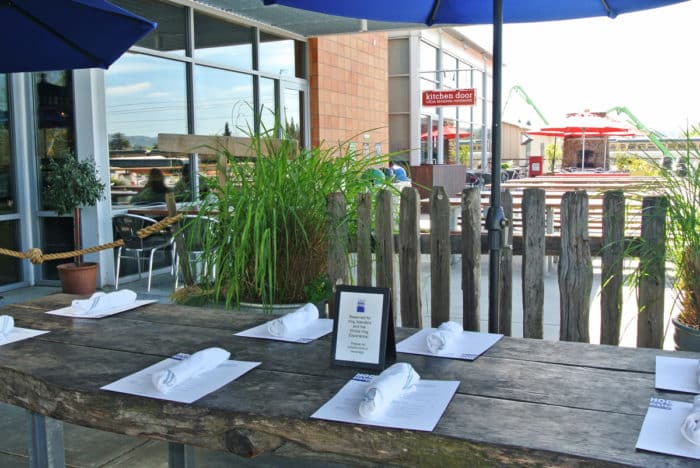 Given the fact that we were in Napa on vacation, it only seemed right to enjoy a beer with my meal. I opted for a Bay Area local brew called Oaktown Brown Ale produced in Walnut Creek by Calicraft Brewing Co. It was a perfectly refreshing and delicious brown ale that paired very nicely with my seafood-focused meal. And at $5.50 for the pint, it felt like a great deal. 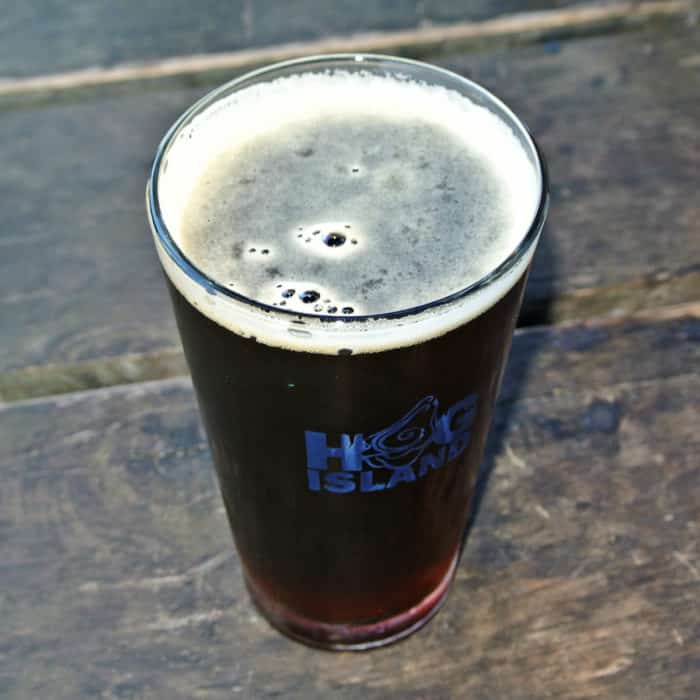 And since I was at a place famed for their oysters that did in fact have the word “oyster” in their name, I figured I should actually get some oysters. The local raw oysters on the half-shell were being sold at around $3 a pop which seemed a little steep for me at the time, so we instead decided to go for the more involved grilled oyster preparations which came four to an order for $13. They were offering three styles at the time and when I asked my waiter for his preference between the Grilled Oysters Rockefeller & Harissa varieties and he said that we could get two of each to complete our platter of four. That sounded like the perfect way to sample the different flavors so that’s exactly what we did.

The platter arrived with four massive oyster shells arranged over a bed of large-crystal rock salt and were extremely hot to the touch. I first went for my Grilled Oyster Rockefeller which came dressed in dark green covering of spinach, Pernod, onion, lemon zest, and cream. The hot grilled oyster was sort of hidden by the topping which somehow reminded me quite a lot of the dense, creamy, vegetal Creamed Spinach at Peter Luger’s Steakhouse. It was tasty, but was relatively mild in flavor and I don’t think the topping really enhanced the fresh seafood.

The Harissa Grilled Oyster on the other hand was extraordinary. The spicy, bright red condiment was made from piquillo peppers, garlic, cumin, and coriander and truly exploded with a vibrant North African kick. Here, the texture and flavor complimented the fresh, plump, grilled oysters instead of covering them up. Next time, I’d go all in on the Harissa Grilled Oysters instead of getting any in the Rockefeller style. 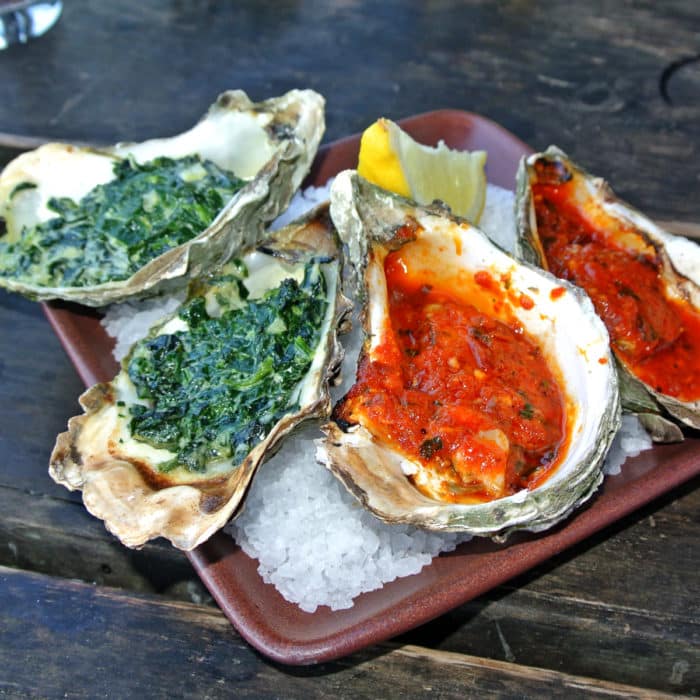 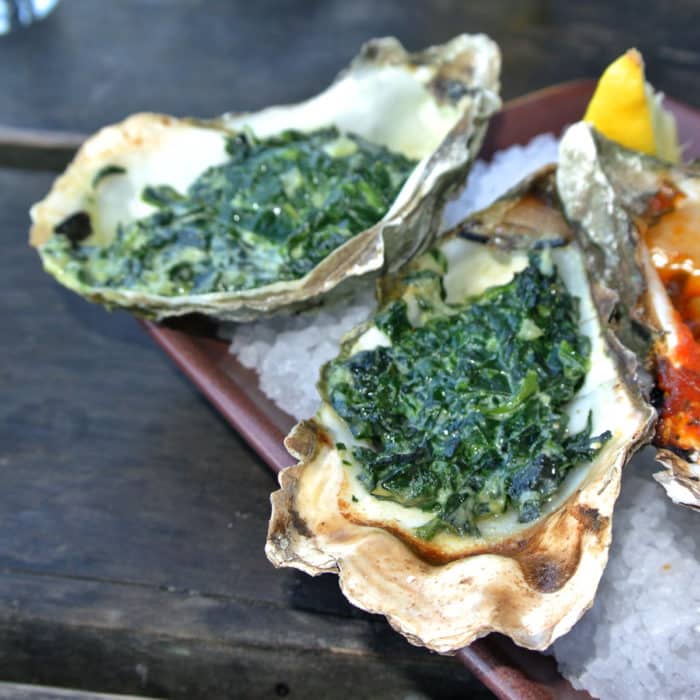 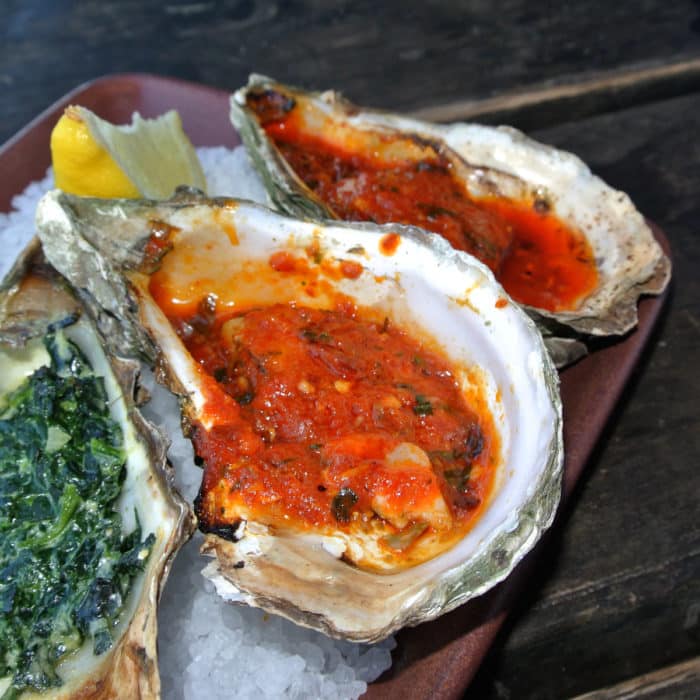 I also knew I couldn’t take a visit to Hog Island Oyster Co. without putting their famed Chowder to the test. I’ve had a number of rather impressive renditions of clam chowder lately, so this one already was facing plenty of stiff competition. And before even receiving the bowl, this one was already at a judgement disadvantage due to its price. This was most certainly the most expensive bowl I’ve ever come across clocking in at a steep $14.

But, this was a really impressive bowl of chowder and it was definitely designed as an entree – it came absolutely overflowing with enormous, fresh, plump, gorgeous-looking in-shell clams. The bounty of fresh seafood was fantastic, but the broth was surprisingly thin and mildly spiced. While digging in, I found plenty of outstanding, crispy little bits of smokey bacon – they were in pretty much every bite – but even that wasn’t enough to really wake up the broth. I think I prefer a little bit more thickness and boldness to my chowder, but if you like yours on the thin side, I’m sure you’ll love this bowl as much as everyone else seems to. 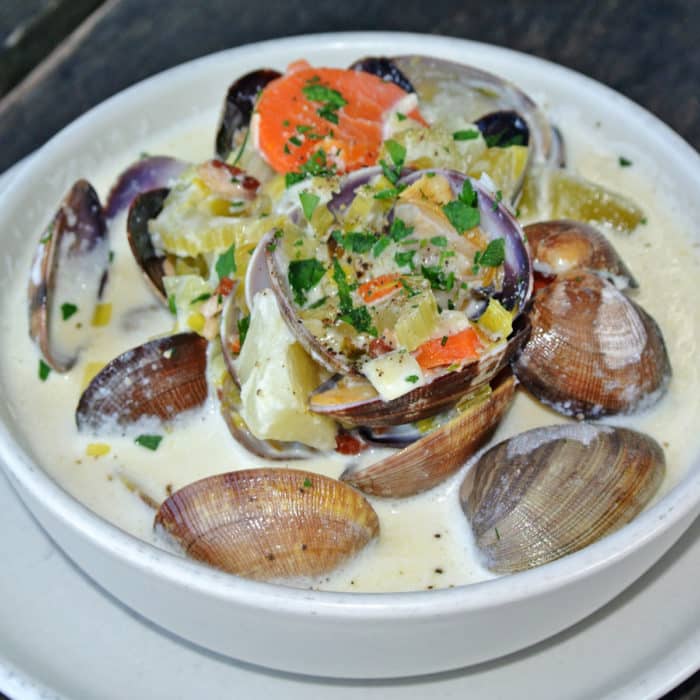 To round out the meal, Amy and I split one more oyster-focused dish – the Oyster Po’ Boy. In this upscale variation on the classic New Orleans sandwich, these oysters were beer battered and fried then placed into a light, airy, fluffy powdered Alexis Baking Co. potato bun with a ridiculously delicious topping of bacon-caper aioli slaw.

The rich, snappy slaw paired incredibly well with the crisp fried exterior that surrounded the tender, plump sea creatures and came together nicely between the potato bun halves – despite its departure from the traditional French baguette format. If this sandwich sounds too rich or over the top for you, there’s no need to worry – the plate came with an assortment of tangy, vinegary pickled vegetables perfect to balance our the sandwiches fried boldness. This sandwich was truly wonderful, especially when eaten in conjunction with those snappy pickled veggies. 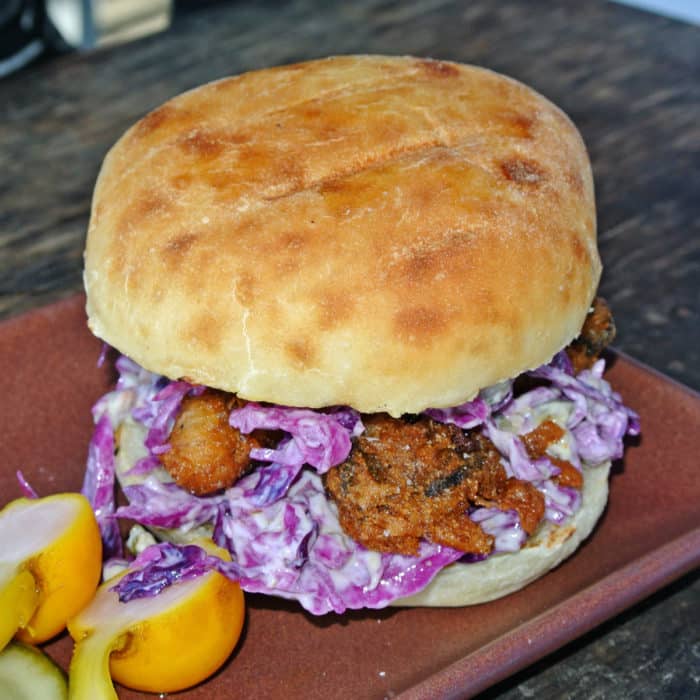 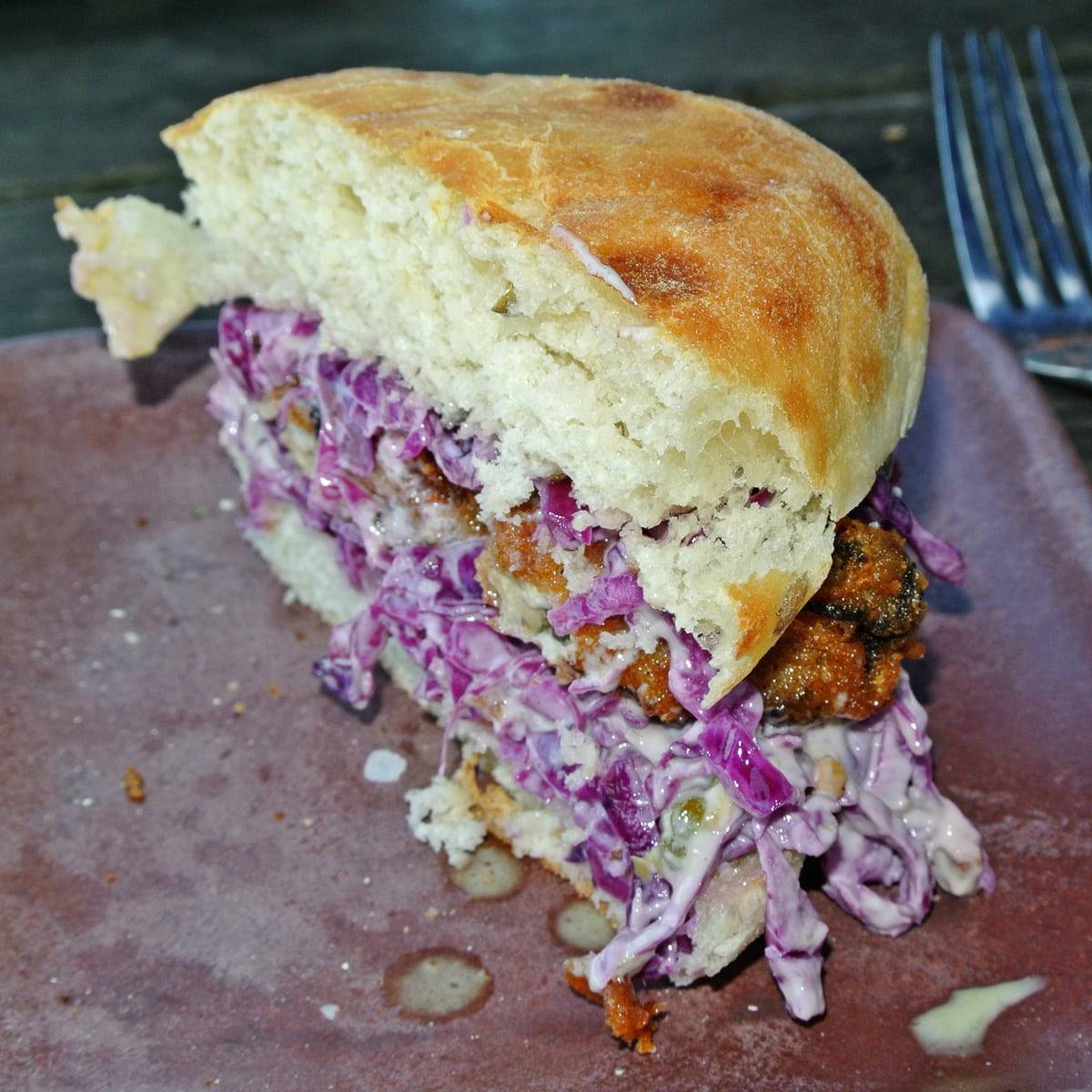 So, if you need an outdoor lunch spot in Napa Valley where you can have a fantastic meal without spending an arm and a leg, Hog Island Oyster Co.’s Oxbow Market location might fit the bill perfectly for you. It’s not cheap by normal standards, but hey – you’re in Napa, so nothing really is. Just enjoy the awesomely fresh seafood creations they have to offer then head off for some incredible wine.

Got another great lunch spot in Napa Valley that I should check out? Let me know in the comments below.