Amy and I spent a Thursday up in Napa then made our way further north up to Calistoga for some pampering with some fancy spa treatments at their famed mineral pools. After concluding an incredible session that included a mud bath, jacuzzi soak, sauna sit, hour-long Swedish massage, and dip in their hot mineral pools, we were ready for lunch.

So, I did my usual move and hopped onto Foursquare to see what awesomeness I could uncover in this unknown territory. Since we were still in wine country, there was an overabundance of fancy, upscale, sit down options, but there something else completely different that was calling my name. I could feel it in my veins – my spidey-sense was tingling. We were gonna track down a Mexican taco truck in the middle of nowhere called La Gitana.

It wasn’t exactly easy to find this truck, but by cross-referencing Foursquare, Yelp, and Google Maps we were eventually able to come across the run down gravel parking lot we were seeking. It housed a beat up drive-through liquor store called Mitchell’s and there was small, cheap, simple, plastic sign that read “Taco Truck” planted in the ground near the lot’s entrance. Clearly we were in the right place, but we still couldn’t see the truck. So, we pulled further into the gravel lot and sure enough there it was, tucked away on the other side of the building soaking up the bright, warm sun.

This lot really was in the middle of nowhere. It’s right at the crossroads of two of the only major roads that exist in the area at the junction between the towns of Calistoga, Santa Rosa, and Geyserville. This particular lot also happens to be home to an incredible, old-rusty-truck and farming equipment dumping ground. It’s almost worth heading here for this sight alone. There’s quite an impressive pile of rusting junk piled near this taco truck which made for an absolutely awe-inspiring atmosphere to enjoy these tacos in while hanging the sun.

But, we were by no means the only people who had found this remote truck – there was a pretty steady flow of local regulars who clearly come by to eat often. But, I still was able to step right up to the lone truck and place my order without any sort of line or wait. I marveled at the astoundingly cheap prices – only $2 per taco and $8 for their nacho platter as I excitedly placed my order. Our food was prepared lightning fast – it couldn’t have been more than five minutes before we had our lunch in hand and – truth be told – it looked absolutely marvelous. So, we grabbed a pair of seats at the plastic folding table that was set up in the sun on the edge of the highway and dug right in to our lunch haul. 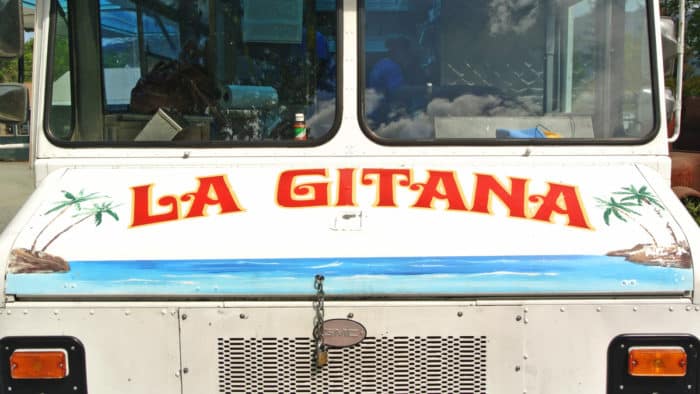 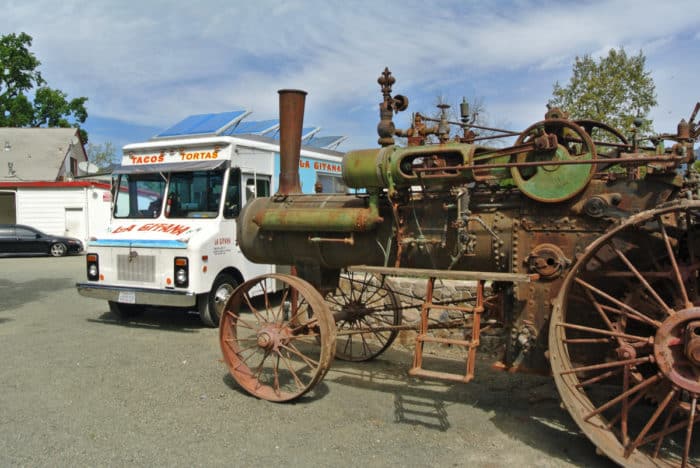 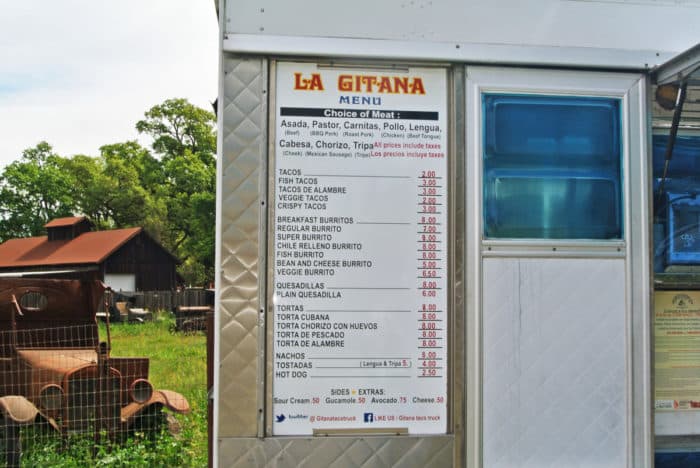 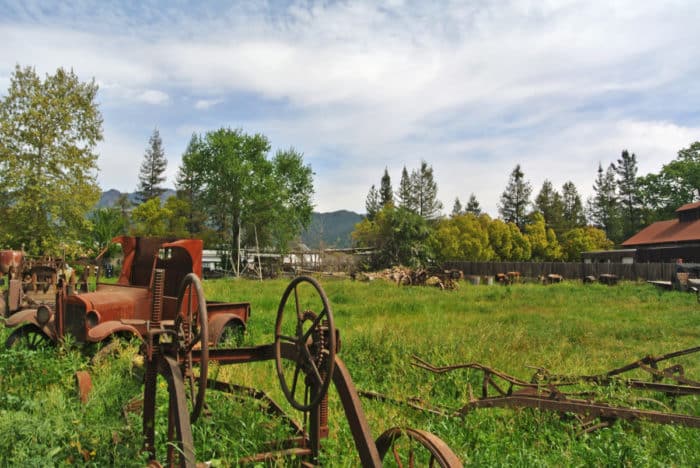 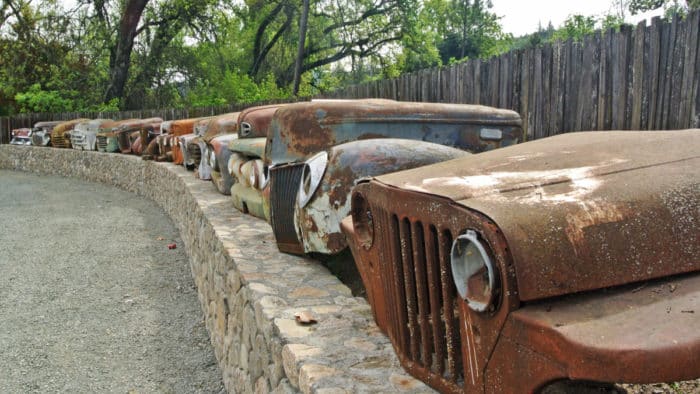 The Truck, Junkyard, and Table

Amy started with her Asada Taco and was quick to claim it as one of the best tacos she’d ever had. And she’s Texan! We all know that Texans know their way around a really good steak taco so that claim absolutely speaks magnitudes to me. 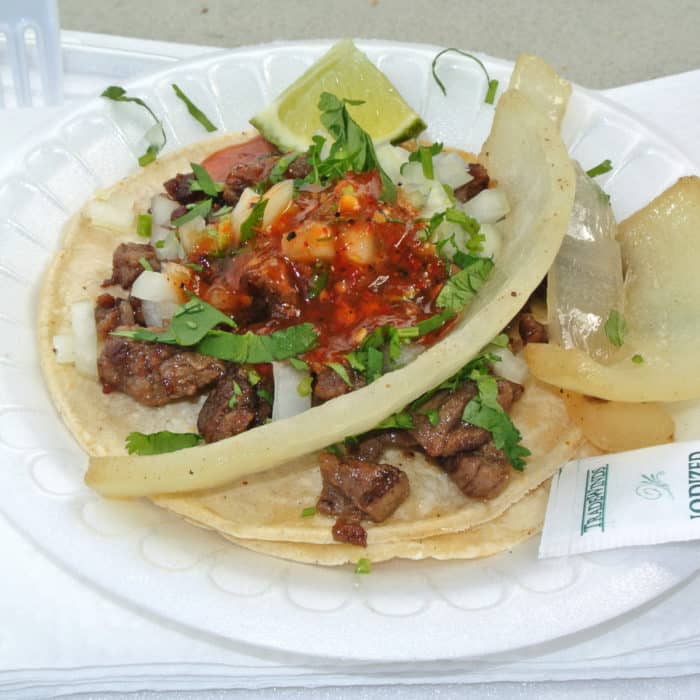 And I had to agree – I was totally blown away by my taco trio as well. The heaping piles of grilled meat were seated upon a pair of tortillas (yes two, as they should!) along with truly exquisite grilled onions and a hearty dollop of chunky red salsa. Each of my three tacos were fully loaded and practically overflowed with the generous portion of extremely flavorful meat. And they were all made even better by squeezing a little bit of fresh lime juice over top too.

I started with my Cabeza Taco which the menu claimed was “cheek” though, I know in actuality that translates to “head” in English. I wouldn’t have been surprised at all to find any odd variety of other strange cooked down head bits in there, but I was just as happy to dig into that ridiculously tender, shredded beef cheek meat filled taco as it was provided.

The Lengua Taco which was filled with beef tongue was also super tender – truly some of the best lengua I’ve had in quite some time. When cooked improperly, this difficult cut of meat can become chewy and rubbery, but this rendition was spot on – especially when consumed in a bite full of all of those other taco fillings.

And then, of course, I had a Chorizo Taco. It’s a rare occasion that I’ll go for tacos without getting at least one filled with this favorite meat of mine. The glowing red sausage was broken down into little crispy, crumbly morsels that were just so incredibly delicious. This chorizo taco filling wasn’t as spicy or greasy as a lot of the chorizos I’ve enjoyed elsewhere, but this rendition was awesome in its own right especially with the added kick of salsa flavor. 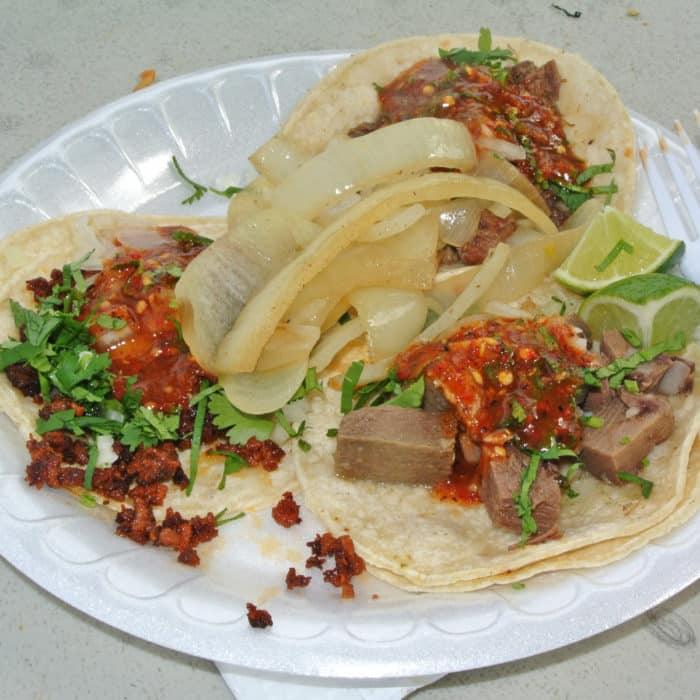 And finally, to bring it all home, the magnificent platter of Chorizo Nachos. Oh my gosh, those freaking nachos. “Fully-loaded” barely even begins to describe this excessive specimen of nacho perfection. The chips were incredibly crispy and salty and came smothered with a combination of beans, melted cheese, sour cream, guacamole, and an absolute boatload of that delicious red, crumbly chorizo sausage I had already enjoyed immensely in taco form. I honestly can’t think of a nacho platter I’ve had anywhere that I’ve enjoyed more than this one. 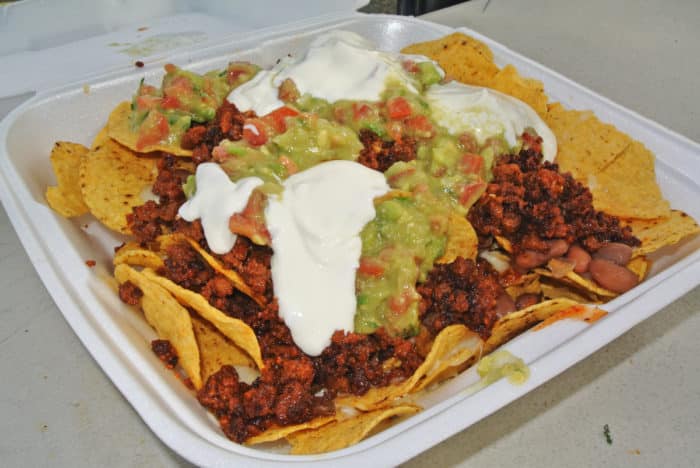 So, I’m pretty excited about uncovering this Calistoga hidden gem Mexican food truck called La Gitana. The prices were dirt cheap, the atmosphere was both authentic and unique and the food was more delicious than I could have possibly dreamed it would be. If you find yourself up in the Calistoga, Santa Rosa, or Geyserville areas, do yourself a favor a stop by for lunch.

Got another great lunch spot in the Calistoga area that I should check out next time I’m up there? Let me know in the comments below.