I’m constantly looking for sushi joints in the Bay Area serving really high quality fish at very reasonable prices. I’ve got spots all over the region (see: Wayo, Tataki, Sushi Tomi, Live Sushi Bar, and Geta) and I’ve even already got a place I love in Hayes Valley, but Domo is quite small and doesn’t take reservations so it’s not super easy to rely on it as a go-to spot in that neighborhood. Only a few blocks away is another well-reputed sushi den called O-Toro that actually does take OpenTable reservations and also sounded like it had a lot of potential to become my new go-to sushi bar in that neighborhood.

Like Domo, it’s very small by SF restaurant standards. And like most of the better sushi restaurants in San Francisco, they have an impressive sake selection. They also have Asahi on draft and a really awesome hot sake dispenser machine. Even though our party of four arrived on time with a reservation, the tiny restaurant was running a few minutes so they took our drink orders while we stood and waited for our table to clear. I took the opportunity dig into some hot sake straight from that futuristic dispenser while my friends partook in the draft Asahi.

Once we were seated, I looked over the menu as well as the chalk board hung on the wall listing this Japanese import specials from the Tsukiji Fish Market in Tokyo (just like many of the high quality sushi joints in SF do). It’s always nice to have that option when you feel like splurging on something really good, but I didn’t partake in any of those imports this time.

Whereas the sushi at my go-to spots Live and Wayo are quite cheap, I can’t quite say the same about the prices at O-Toro. It’s not that they’re even that expensive, but everything will run you like a buck or two more than at the other places – even the non-imported fish. However, everything we ordered was clearly very fresh, flavorful, and high-quality so we were happy to spend a few extra bucks, especially because we were able to easily secure a dinner reservation. 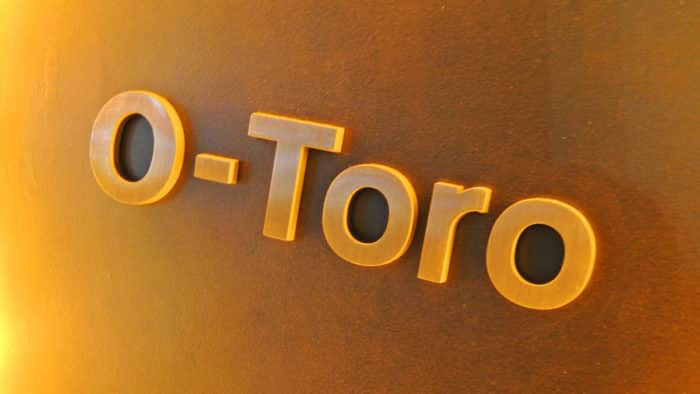 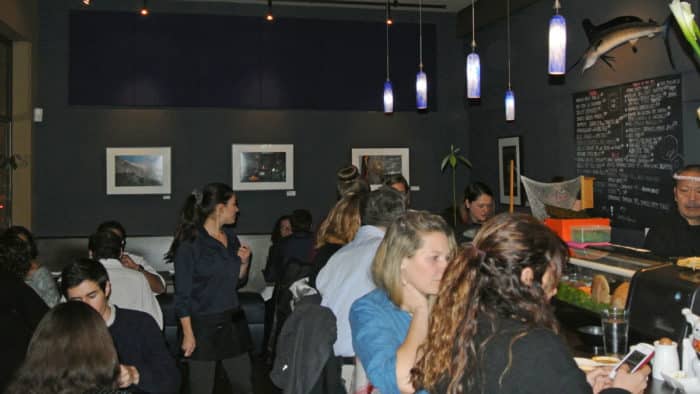 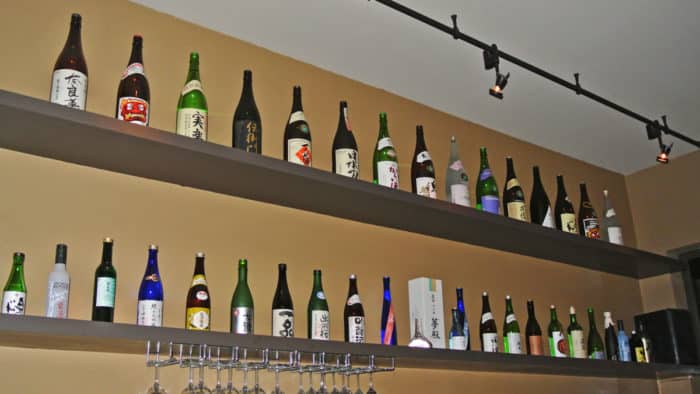 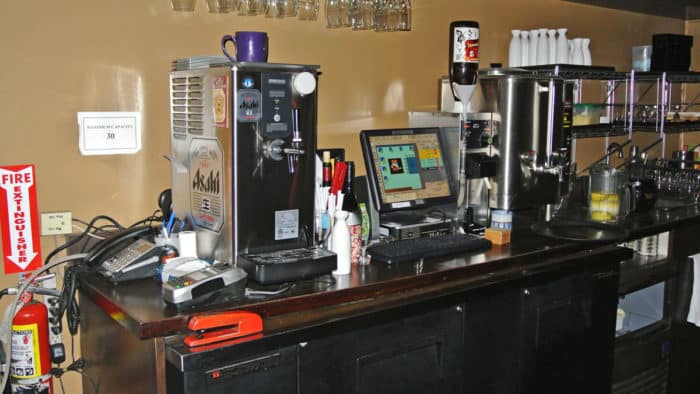 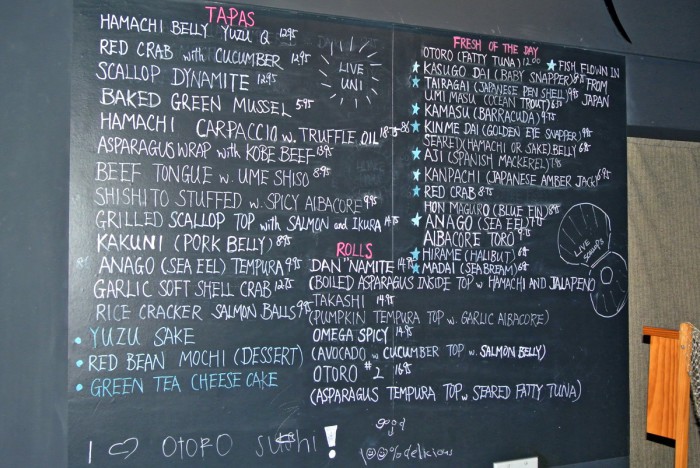 For our meal, Amy and I ordered a variety of sashimi, nigiri, and sushi rolls running the gamut of their selection. I started off with Kanpachi Nigiri pieces which were made with fresh slices of Amberjack. The fish had a bright white color with a stripy and almost glassy visual quality to its appearance. It had a very clean, fresh taste, but the most remarkable aspect was its truly wonderful silky texture.

Next up was the Hirame Nigiri which was involved laying sliced halibut over a shiso leaf then topping it with green onion. These additions added a pleasant, herbal, vegetal tone to the pinkish fish that I really enjoyed. This hirame was another excellent nigiri selection at O-Toro.

From there, I moved on to my Salmon Skin Maki roll which seemed like a smart and cheap way to make sure my belly was full by the end of this relatively light meal. Each of the five large pieces was overstuffed with perfectly crispy, oven roasted salmon skin, cucumber matchsticks, a shiso leaf, and microgreens. I loved the punch of salty, crispy, crunchy texture in every bite and the herbal shiso leaf flavor and other greens added a nice complexity to the otherwise straight-forward maki roll.

The Cherry Blossom Roll was certainly the most complex item we ordered during this meal, but it was still relatively simple compared to some of the crazier American fusion sushi I’ve had elsewhere. It was essentially a salmon and avocado roll with raw tuna laid over top. In my opinion, this roll was best enjoyed when the tuna was pulled off the top and eaten separately like a slice of sashimi which would leave us with a perfectly delicious salmon avocado roll to eat after. At $14.75 for the roll, it was definitely pricey, but the avocado was incredibly fresh and creamy and when you eat the roll and topping separately, it really didn’t seem so bad.

And finally, our usual expected sushi joint order – Sake Sashimi. This was absolutely some of the best salmon sashimi I’ve ever tasted. I’m not kidding. The texture was so incredibly buttery – it practically melted on my tongue. It’s certainly simple, but sometimes it’s the simple things that turn out best and shine the brightest. I’d strongly recommend ordering this if you’re dining at O-Toro. 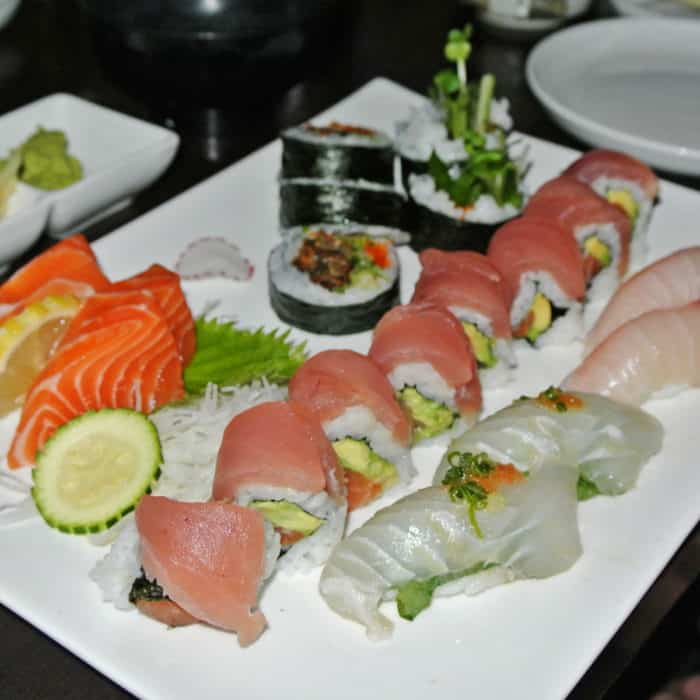 So, while it may not be the best value I’ve found in San Francisco for sushi, I can say with absolute certainty that they serve some really high-quality raw fish. If you absolutely need a reservation for your sushi dinner and don’t mind spending a couple extra bucks on your meal to secure one, Hayes Valley’s O-Toro will serve you quite well.

Where do you go when you want some great sushi in San Francisco? Let me know in the comments below.